Scott and Dan — with special guest Keith Champagne — hit up the comics racks from 38 years ago!

This week for RETRO HOT PICKS, Scott Tipton and I are joined by writer/artist Keith Champagne, who is contributing to The Art of Ominous Press — a hardcover celebration of the indie publisher’s 25th anniversary. The book is on Indiegogo and you can click here to take a look.

(Keep in mind that comics came out on multiple days back then — as has become the case now. So these are technically the comics that went on sale between Nov. 15 and Nov. 21.) 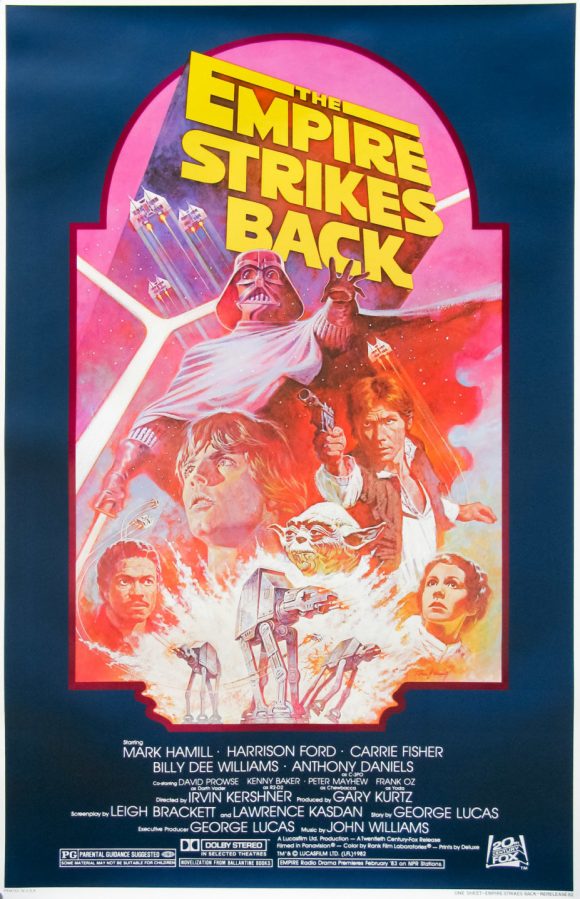 Ronald Reagan was in his first term as president. The top box-office draw was a re-release of The Empire Strikes Back. You’ve probably heard of it. It’s worth noting though, that E.T., which came out in June, was in and out of the top spot for months. 60 Minutes was the top-rated show but Dallas was also a big hit (as was the case in last week’s column). The schmaltzy Up Where We Belong by Joe Cocker and Jennifer Warnes was the best-selling single while Men at Work’s Business As Usual led the Billboard albums chart. Which is all fine and good, but The Clash’s Combat Rock (No. 12 on the Billboard 200) smoked them all.

Keith Champagne, Inker of the Stranger Things series of mini-series for Dark Horse; Writer of Silver Streak and Equilibrium for Chapterhouse and a revival of The Mighty with Peter Tomasi. He also works as a project manager for Ominous Press.

So… back in November 1982, I was 12 years old and deeply in love with comic books but didn’t have the money to buy anything on a regular basis; I relied on the generosity of my parents to occasionally pick me up a book or two from the drug store or newsstand. It wasn’t until ’85 or ’86 that my peak buying years kicked in, when I literally bought every single new book every week at a new comic shop called The Comics Den that had popped up about a 15-minute drive from my house. 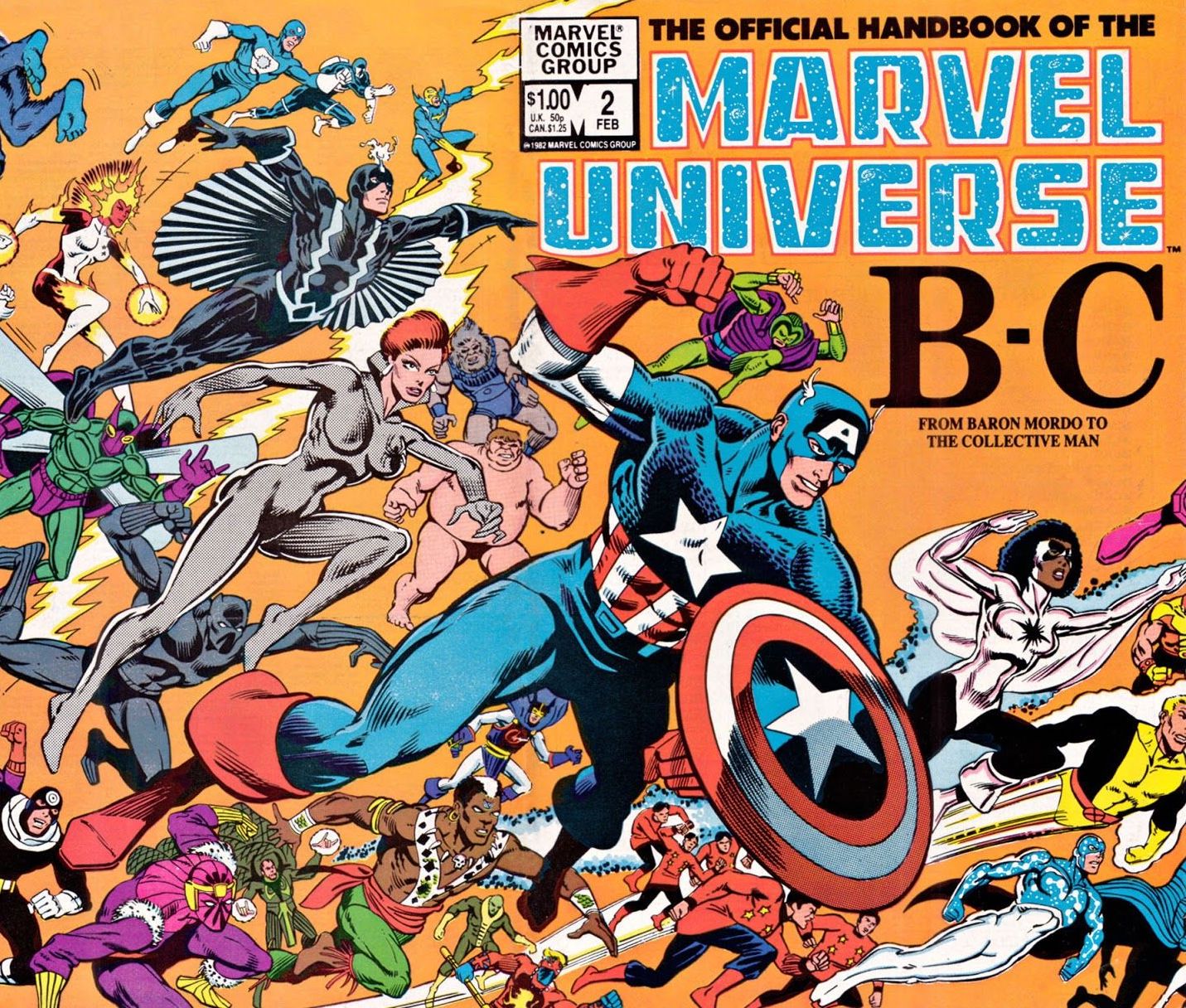 So, long story short, I was more of a peruser than a buyer at age 12. My parents would often drop my brothers and me off at the Norwichtown Mall to kill time at the arcade. After a couple of games of Karate Fighter, I would slip off to the newsstand which is where I remember encountering The Official Handbook of the Marvel Universe #2.

I loved the Marvel handbooks. Not only did they introduce me to a ton of Marvel characters I had never even heard of, but finally, here was definitive proof of which characters were stronger than others, something my brothers and I debated so intensely, we’d sometimes end up in fist fights. 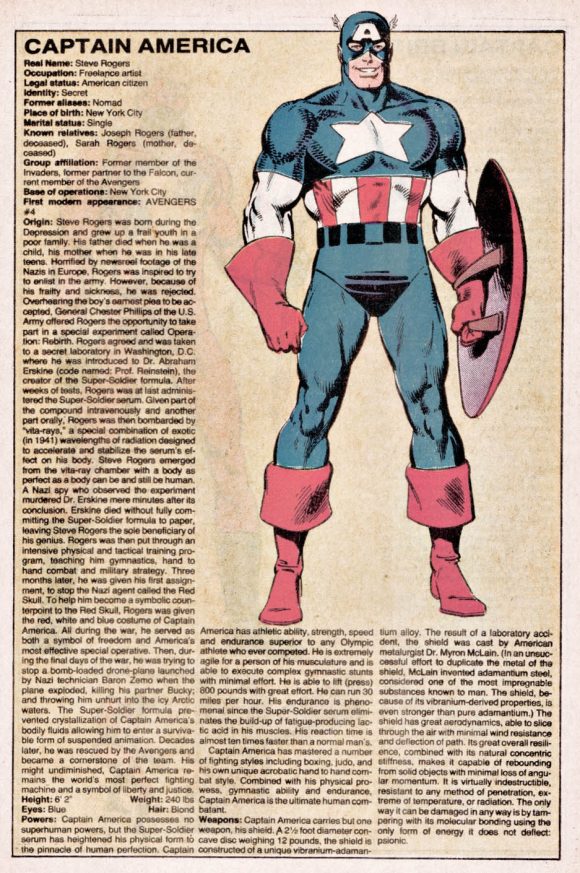 Around this age, I was also becoming aware of the names and styles of different artists and the handbooks were like a gateway drug for me, introducing me to so many different pencillers and, of course, there was Joe Rubinstein, probably the inker I most easily recognized in the ’80s, pulling it all together. I remember buying DC’s Who’s Who too, but it was never the same as the Marvel handbooks, which I still believe are the gold standard. Plus, to this day, every time I look at the cover to #2, I think that Cobra is sneak attacking Captain America.

Scott adds: One of the best things about OHOTMU were the amazing technical drawings and schematics by Eliot R. Brown; everything from blueprints of Spidey’s webshooters to architectural drawings of Avengers Mansion. I never missed an issue. 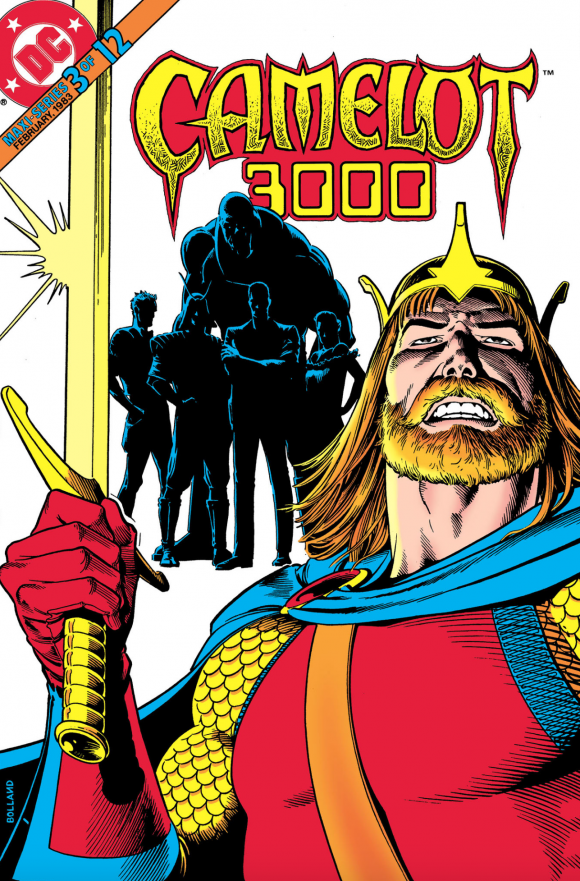 I’m pretty sure the statute of limitations has expired by now so I feel safe revealing that I shoplifted Camelot 3000 #3 from my local drugstore. There was NO WAY my parents were going to spend a whole buck on a comic book for me and dammit, I had to have it. Like, couldn’t live without it. I had never seen a comic book just so… drawn… before. I didn’t know much about art at the time (still don’t), all I knew was that the characters looked like real people to me; I had never seen anything like it. Plus, I was a big King Arthur nerd as a kid. Breaking the law seemed a very reasonable price to pay to own this puppy.

Flash-forward about 10 years to my first year at the Kubert School and I was given a copy of Brian Bolland’s amazing pencils from this issue to practice inking over. I gave it my best shot; if I still had my old portfolio I’d happily embarrass myself and show my attempt at inking it to the world. Safe to say I was no Bruce Patterson. But it sure was fun to try. 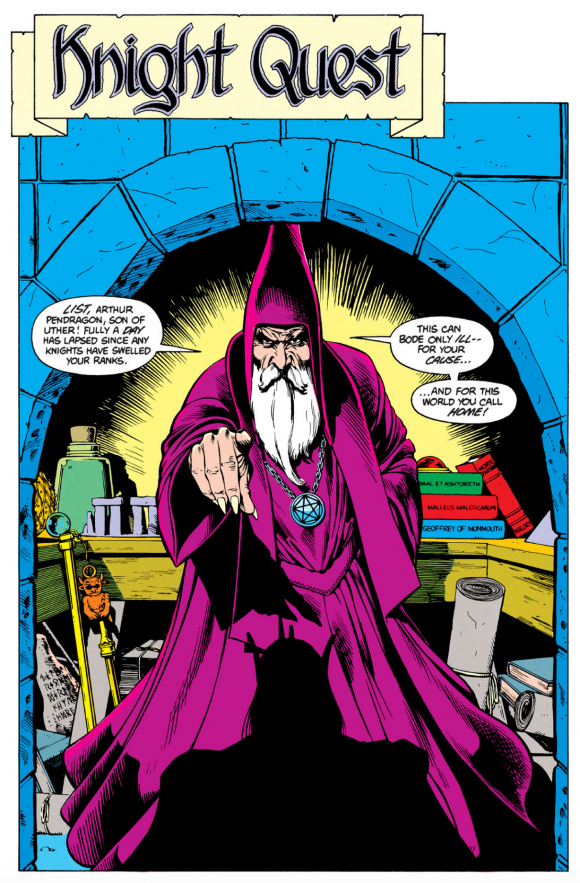 I felt lucky to meet Mike Barr a couple of years ago and let him know how much I loved this series (and with all the bad King Arthur movies out there, how has no one made a great one out of this?).

I don’t have a comic collection anymore but as I’m writing this, I think it’s past time I tracked down the entire Camelot 3000 series again. It’s special.

Scott adds: Another highly influential series that doesn’t get much respect these days. Mike W. Barr and Brian Bolland’s science-fiction version of the King Arthur mythology was groundbreaking in its storytelling and handling of gender issues. And the interiors by Bolland were stunning.

And finally, I have to go with Fantastic Four #251. 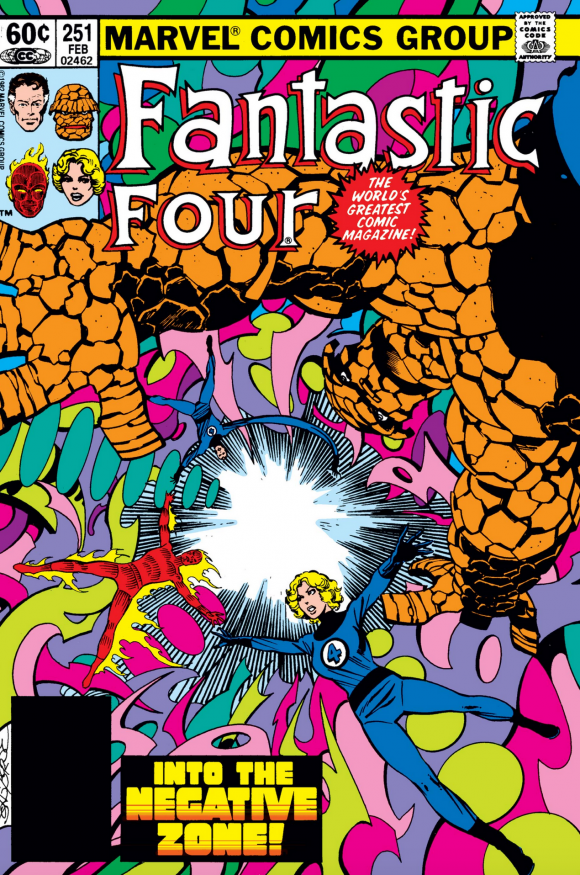 John Byrne, man. John Byrne was a name that had already burned itself into my skull, even at age 12. I could recognize a comic by JB on sight and this issue was one I perused many times at the news rack at the Norwichtown Mall. I couldn’t tell you much more about the story than what you see on the cover: the FF is clearly taking a spin into the Negative Zone. It’s a safe bet Annihilus was involved. But I can tell you I was in love with John Byrne’s work at this early age. One of my greatest career highlights was writing and inking a story that John drew for DC; it was a thrill to collaborate with one of my true heroes. 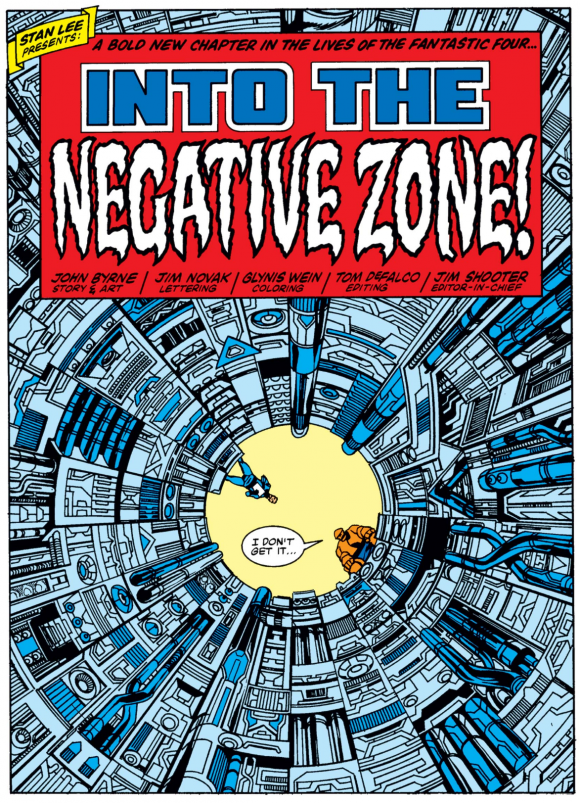 If you’ll notice, I don’t remember exactly what happens in any of the books I picked this week. What’s important to me, what stands out to me as I look back, aren’t the adventures the characters were having. It’s that I was forming my own relationships to the creators of these books, more so than the characters themselves. Some kids liked Hulk Hogan. I was into John Byrne. Dale Murphy was my favorite player on the Braves but he couldn’t hold a candle to Brian Bolland. Harrison Ford was cool but he was no Alan Moore. It felt like I was becoming part of a secret club full of the most talented people in the world (I still feel comic book artists are the greatest artists in the world) and looking back to the books of my youth makes me feel incredibly lucky my own dreams have come true and I’ve gotten to know and work with so many of them.

Star Wars #68, Marvel. Boba Fett appearances were exceedingly rare in Marvel’s original Star Wars days. If I had seen this in a spinner rack at the Quik Stop, I would have jumped for it like found money. 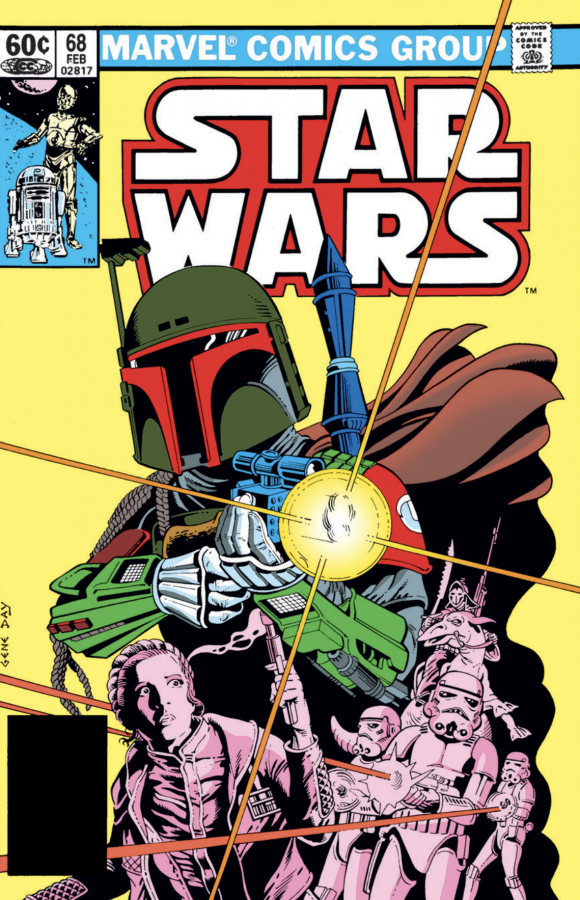 Peter Parker, the Spectacular Spider-Man #75, Marvel. I was way invested in the Spidey/Black Cat romance in the pages of Peter Parker and Doc Ock’s thirst for revenge against the two of them. One of writer Bill Mantlo’s more overlooked runs. 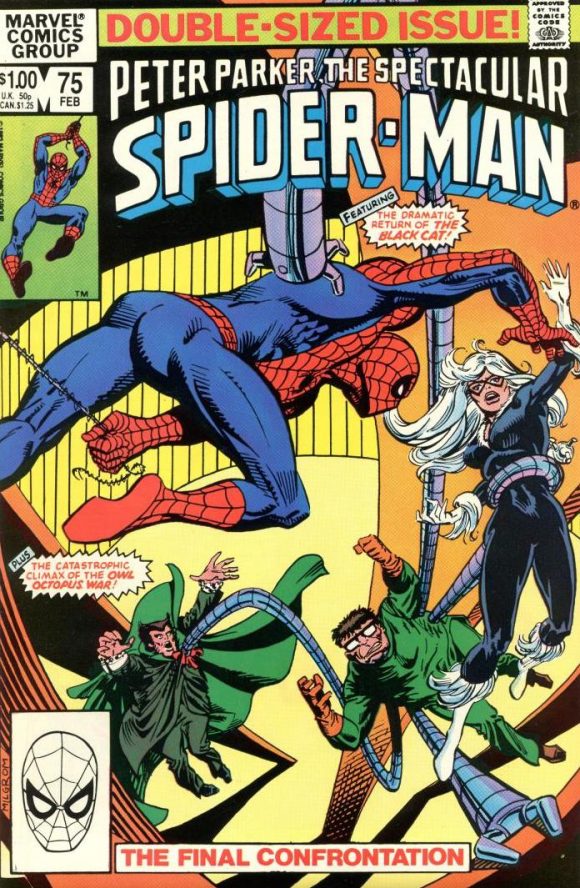 Amazing Heroes #17, Fantagraphics. Dig the Kevin Nowlan cover and Supergirl’s very ’80s ‘do. I loved this mag and have to say it was a very early influence on what would eventually become 13th Dimension. 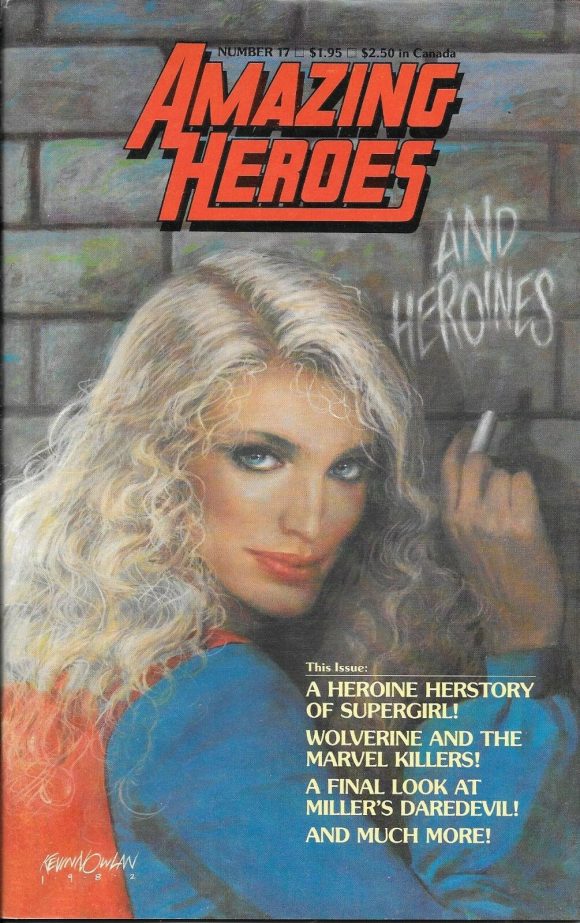 Famous Monsters of Filmland #190, Warren. I’m guessing that Empire Strikes Back was on the cover because of the re-release. Or maybe it’s just that anything Star Wars sold like gold. And there’s also a Superman III preview, which would have had me super-excited… until I eventually saw the movie for myself. 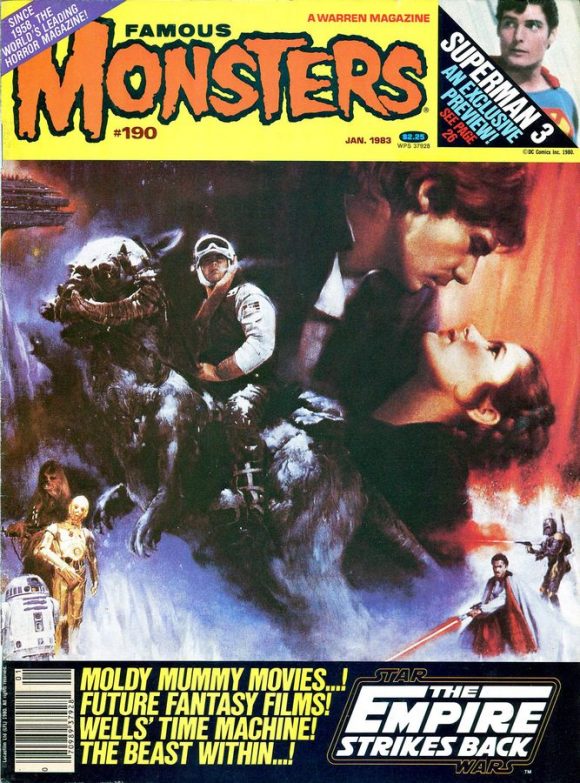 The Brave and the Bold #195, DC. The final stretch of Brave and the Bold was a combo of oddball team-ups and inventive pairings. (Which I suppose was the hallmark of the series anyway.) This one sort of fits in between, because, y’know, vampires and Batman go pretty well together. Not-So-Fun Fact: This was Jim Aparo’s penultimate issue doing interiors on the title. He did covers until the #200 finale, though.