Scott and Dan — with special guest Aaron Lopresti — hit up the comics racks from 45 years ago!

This week for RETRO HOT PICKS, Scott Tipton and I are joined by DC and Marvel artist Aaron Lopresti, who is contributing to The Art of Ominous Press — a hardcover celebration of the indie publisher’s 25th anniversary. The book is on Indiegogo and you can click here to take a look.

(Keep in mind that comics came out on multiple days back then — as has become the case now. So these are technically the comics that went on sale between Nov. 1 and Nov. 7.) 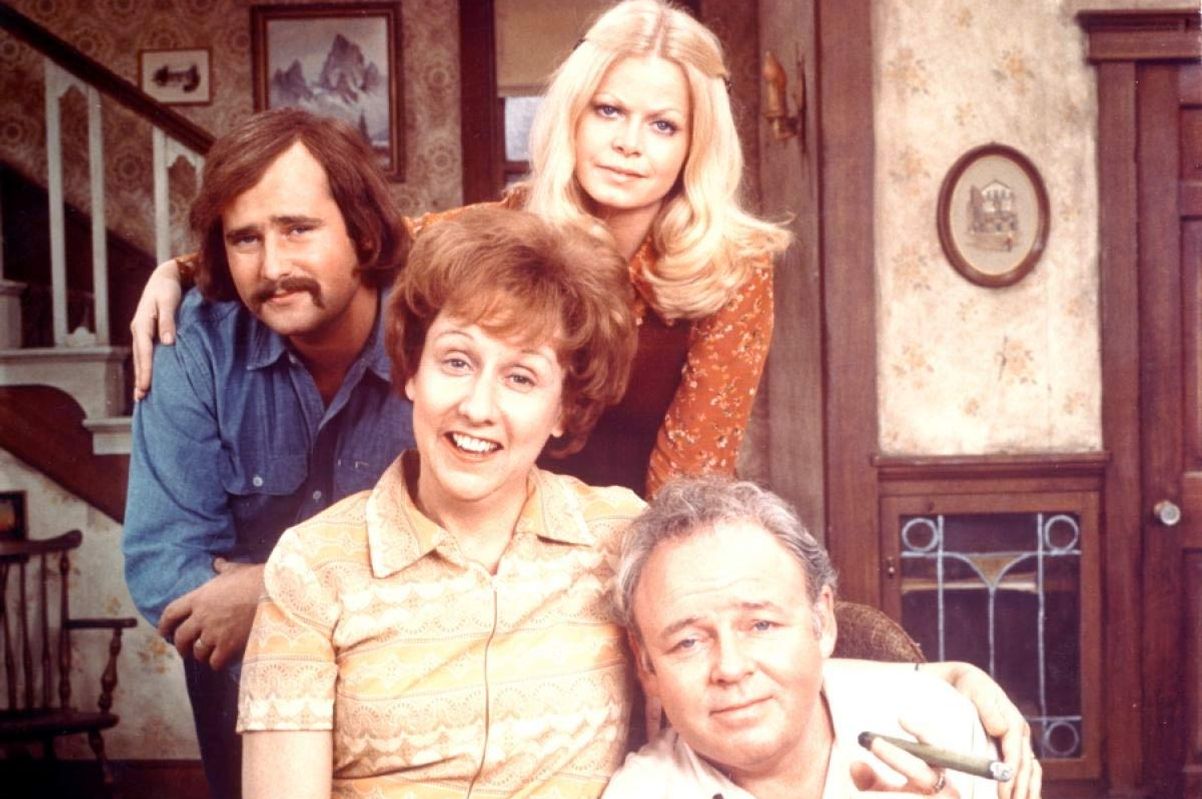 So let’s set the scene: Gerald Ford was in the White House; this week he gave a videotaped deposition for the trial of Manson acolyte Squeaky Fromme, who had tried to shoot him in September. Walter Matthau and George Burns starred in the film adaptation of Neil Simon’s The Sunshine Boys. But in a couple weeks, one of the most gripping and critically acclaimed movies in history would be released: One Flew Over the Cuckoo’s Nest. As was so often the case in the ’70s, All In the Family was the top show on TV. Elton John’s catchy Island Girl led the Billboard 100 while his Rock of the Westies was the No. 1-selling album.

The Phantom Stranger #41, DC. What a great Jim Aparo cover featuring Deadman. I didn’t end up actually buying this comic because I was a Marvel Zombie through and through. However, I remember picking this up and thumbing through it at the store thinking how cool it was. I may have not wanted to jump into a new title either just for one cool issue. It is hard to jump back into my 11 year-old mind and remember exactly what I was thinking and why I wasn’t smart enough to buy this! I still don’t have it so I now I am going to have to go find it on eBay! 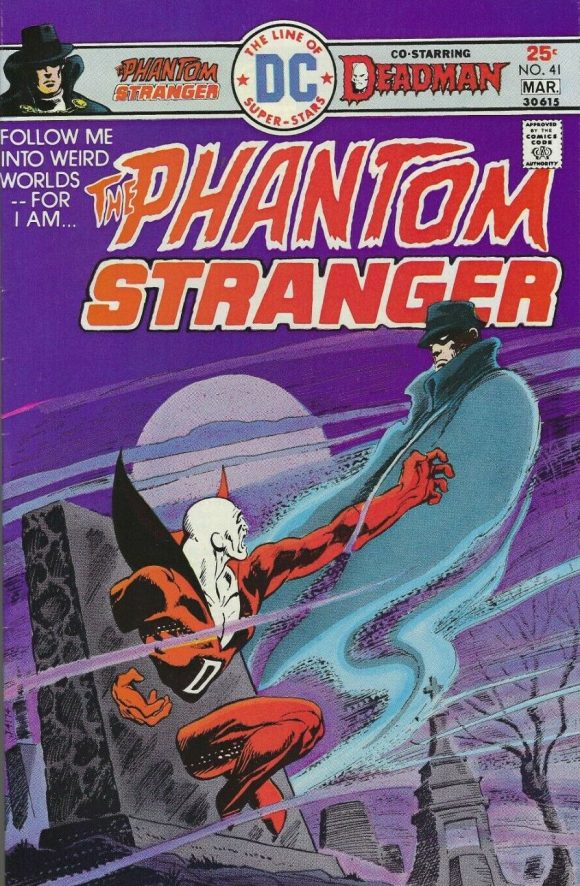 Daredevil #130, Marvel. I collected Daredevil on and off over the years and I was definitely on for this issue. The black cover with the skeleton was just too cool to pass up (notice a trend here?). I can’t remember the content of the story but it got me back into Daredevil for awhile. I remember later buying up through the first appearance of Bullseye but I also remember that I stopped collecting Daredevil just before Frank Miller took over. Stupid. Klaus Janson was inking during this time and his style was so strong, I don’t think it mattered who was penciling, it was really his book. 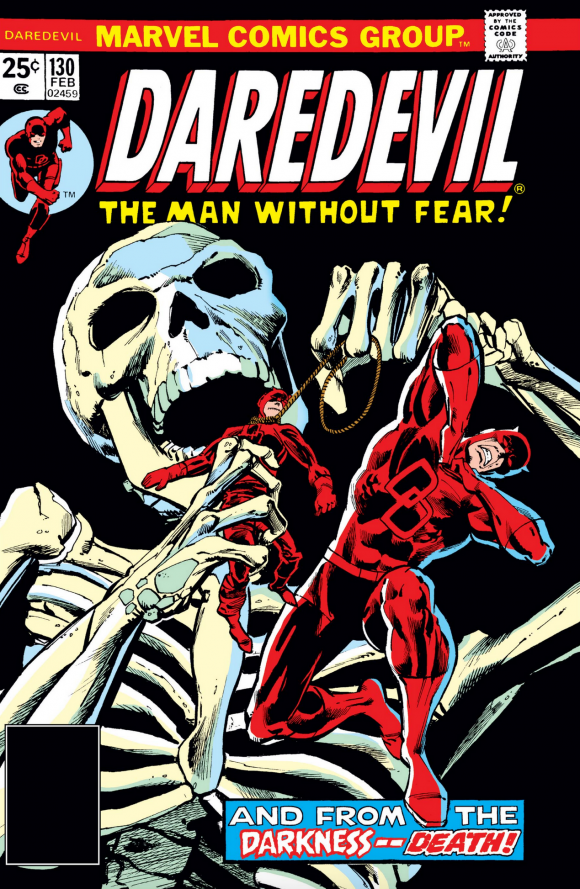 (NOTE From Dan: Aaron was deep into comics reading in ’75 and he couldn’t resist making picks of other books that came out that month. Dig these.)

The Amazing Spider-Man #153, Marvel. ASM was the only title that I religiously bought every month without fail. Honestly, this issue was pretty lame as I was used to having a great super-villain every issue. In fact, a great Shocker story just ended the issue before this. As I recall, this issue centered around a kidnapping plot that culminated in an empty football stadium. Ho-hum. The next issue had the Sandman in it, so this was clearly a filler but even a Spider-man filler story was better than a lot of other titles. 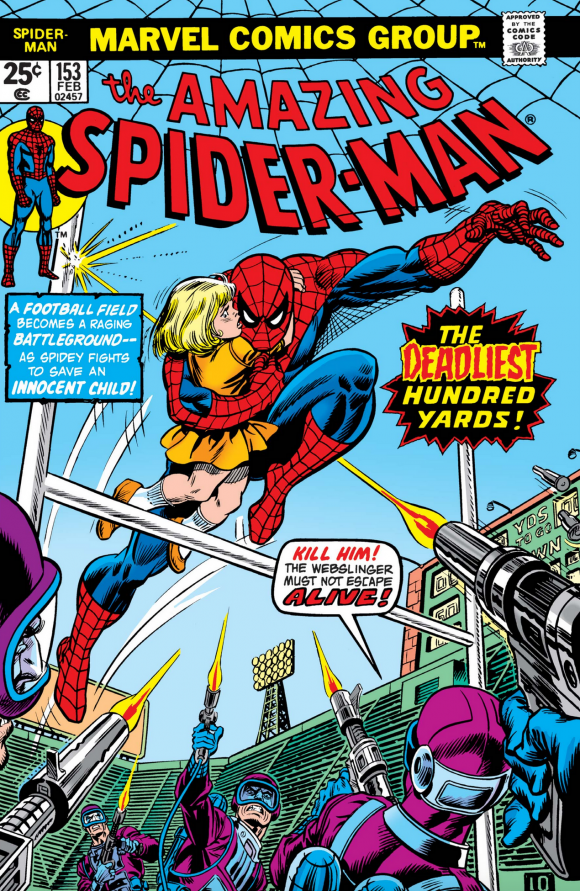 Marvel Premiere #28, Marvel. Out of all the comics that came out this month, Marvel Premiere #28, the first appearance of the Legion of Monsters, was my favorite. I was unashamedly a monster comic guy, so when I saw an issue with all of these great creepy heroes as a team, I had to have it. I remember loving it and hoping there would be an ongoing monthly. Sadly, it never happened. When you think about it, how could you possibly control the Man-Thing and Werewolf by Night to fight on a super team? Still, I think I could make it work… 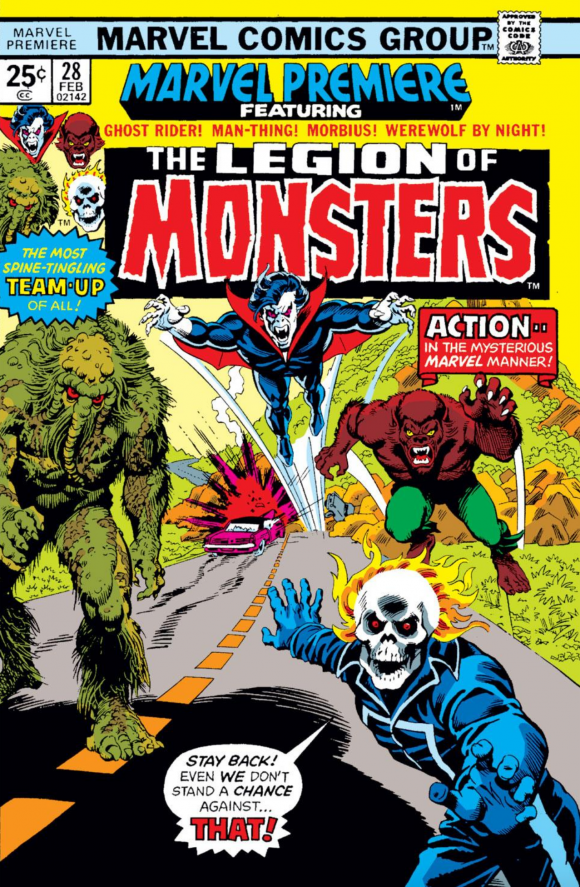 The Avengers #144, Marvel. I bought about 20 issues of Avengers in a row before I moved on to something else and this issue was right in the middle of that run. Even as a young kid I was very aware of the collectibility of comics so I was always on the look out for first appearances and first issues. This story has the first appearance of Hellcat, who was originally Patsy Walker. At the time I had no idea who Patsy Walker was but I realized it was a new character and I had better not miss the issue. I actually sold a large portion of my collection many years ago to get the down payment for my first car and this issue was a casualty of that sale. I recently purchased a 9.2 copy for around $100. A far cry from the 25 cents I originally spent on it. 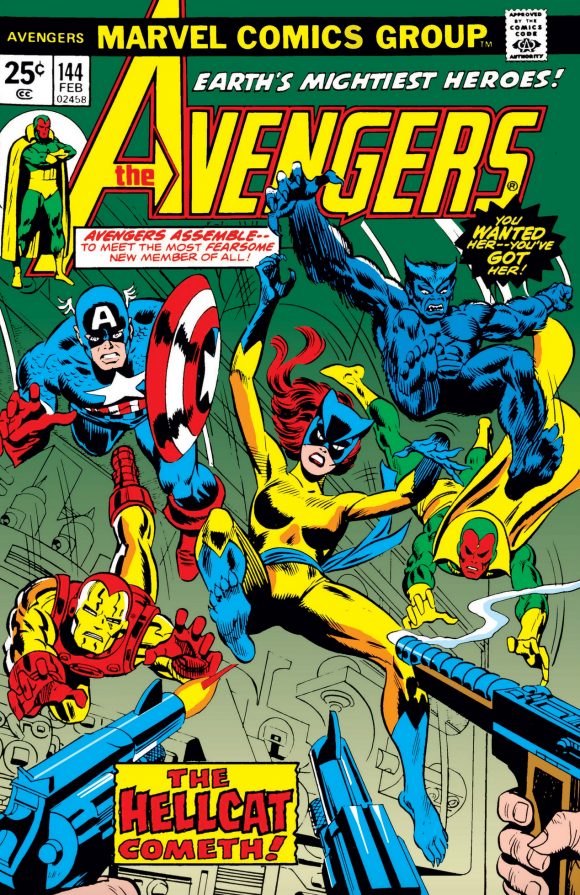 Plastic Man #11, DC. Even though this was a DC comic, I was a big fan of Plastic Man so I grabbed this up on sight. Also, this was being promoted as a first issue; it was in the sense that the original DC Plastic Man series had been cancelled and this was the rebirth. (They just kept the numbering from where they left off as opposed to starting over with a new #1.) Plastic Man always had the mix of superhero and humor that I found appealing. If you are not going to scare me with a monster, make me laugh! 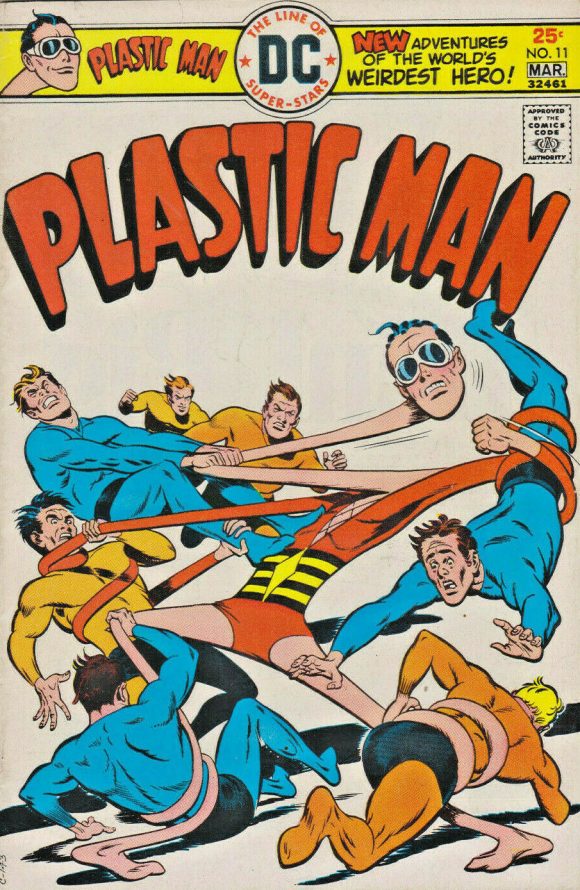 Warlock #11, Marvel. When Warlock came back starting with Issue #9 a few months earlier, I was blown away by the art. It was, of course, Jim Starlin. However, I originally read the credits wrong and thought Tom Orzechowski was the artist (he was the letterer) for quite some time before someone enlightened me to the truth. Starlin’s stories were always so far out there that they were hard for me to follow at that age but his groovy art kept me coming back for more. These are books that I originally bought off the newsstands and later sold or traded away. I did buy them again several years ago before they took off in value. Look at me, I did something smart! 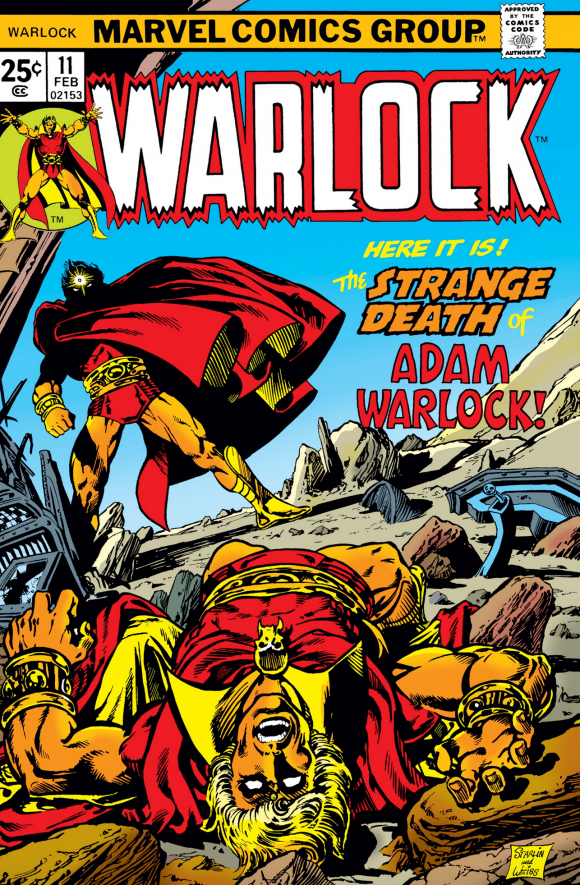 House of Secrets #140, DC. I had discovered Wrightson’s Swamp Thing retroactively and was able to find all of the back issues in old books stores and used comic shops. So I was very familiar with the Patchwork Man, who originally appeared in Swamp Thing #2 and #3. When I picked up this comic, I was hoping that Wrightson would be drawing it. When I realized it wasn’t him but instead Nestor Redondo, I picked it up anyway. Redondo was a great, very underrated artist that even at 11 years old I could appreciate. So much like Plastic Man, I broke my Marvel-only rule and bought a DC book. 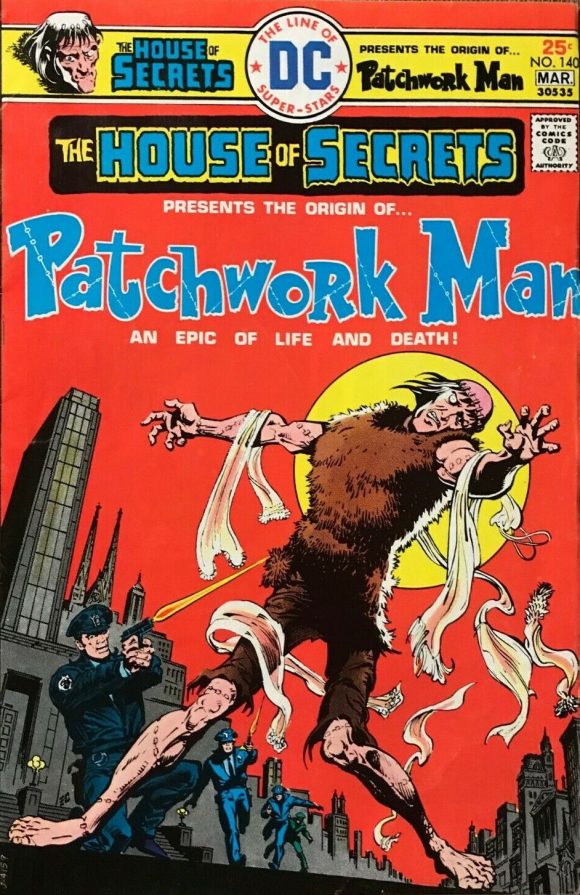 Justice League of America #127, DC. I could never resist a cover where the Justice League was cheering for something that seemed bad. I’m such a sucker. 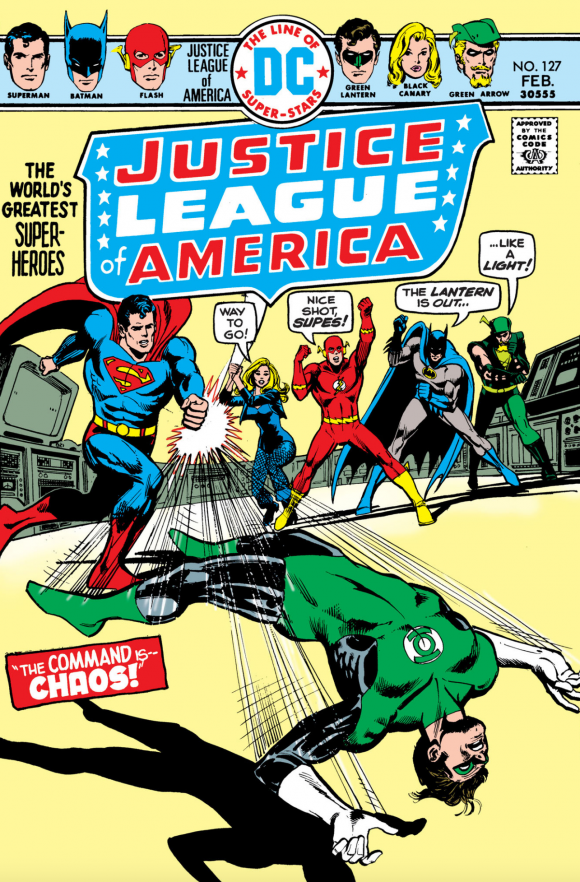 Man-Bat #2, DC. Man-Bat was a genuinely creepy character for DC, which is why I suspect his solo series was so short-lived. In fact, I think this was the final issue of the series. 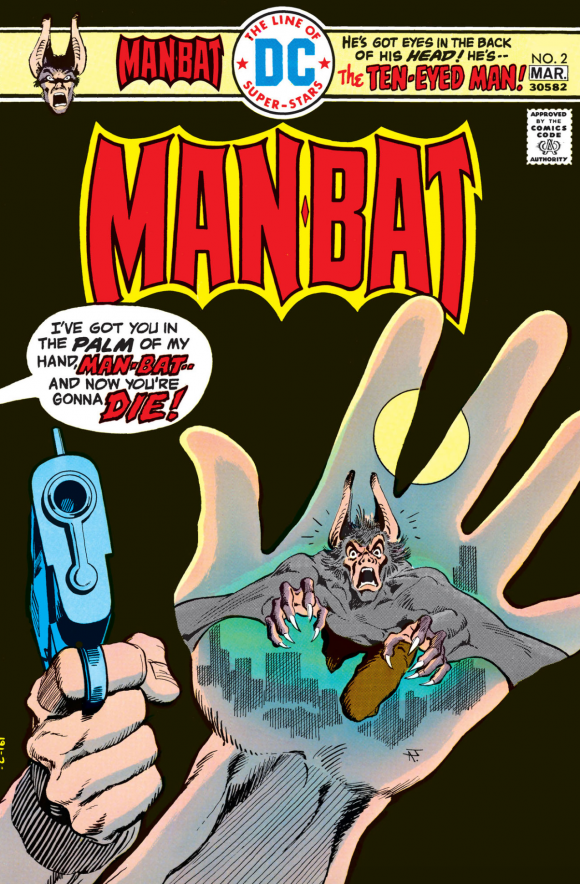 Dan adds: It was — and it was a different creative team from the first issue, too. Issue #1 was Gerry Conway, Steve Ditko and Al Milgrom. Issue #2 was Martin Pasko, Pablo Marcos and Ricardo Villamonte. Gotta say, all things considered, I would have really liked to see what that first team would have come up with over the long haul, especially Ditko. Tangentially related: I liked it when Man-Bat became a private eye and teamed up with Jason Bard in Batman Family.

Super-Villain Team-Up #4, Marvel. If you’ve never read Super-Villain Team-Up, it’s essentially month after month of Doctor Doom and the Sub-Mariner looking for new ways to screw each other over every issue. So much fun, from the mind of Marvel mainstay Bill Mantlo. 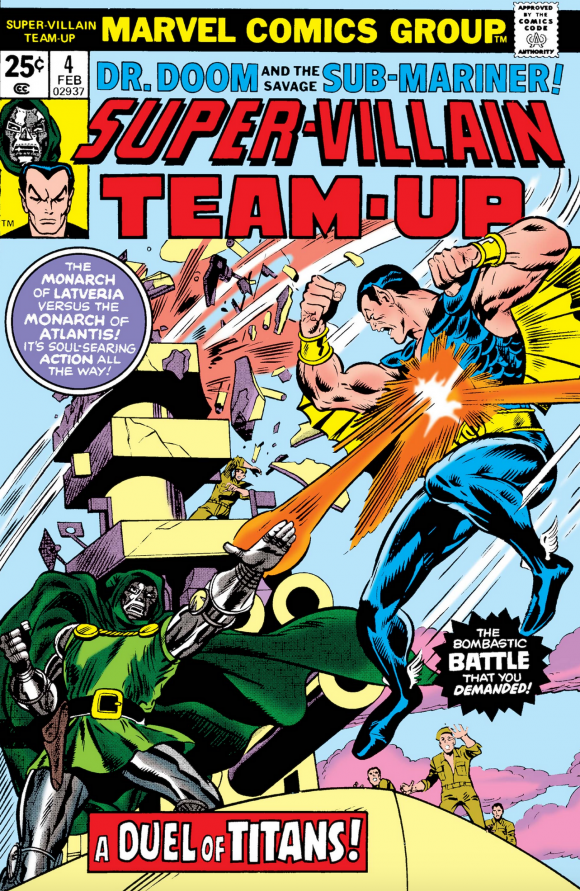 Christmas With the Super-Heroes, DC. (AKA Limited Collectors’ Edition #C-43) This was one of those comics I never saw in real life as a little kid, but was tortured by its appearance in house ads in pretty much every DC comic book for months. When I finally got a copy when I was in college, it could never really live up to my expectations, but it was still pretty satisfying. 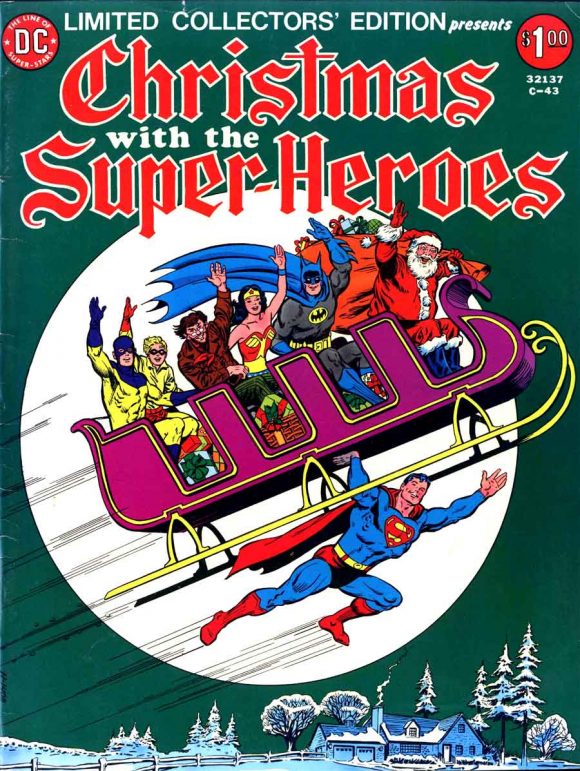 Amazing World of DC Comics #9, DC. I’ve decided my next quest will be to get a complete run of DC’s in-house “fanzine” — but this issue, the rarest of the lot, commands three figures. It’s like a mini-Legion of Super-Heroes encyclopedia, which just goes to show how popular the 30th century’s greatest heroes were at the time. 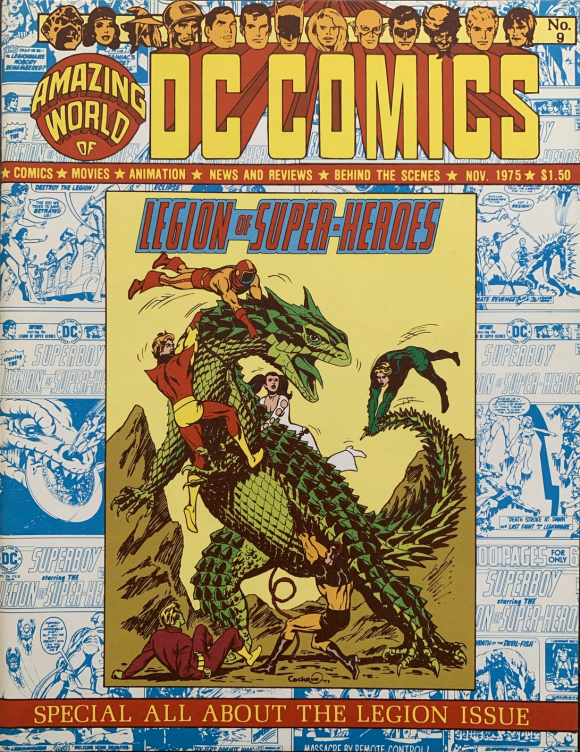 Superman: Alien Creatures, Power Records. (AKA Power Records #PR-28.) Don’t have it, never heard it, don’t care. Power Records rule and if I had the chance to turn back time, I would scarf this up. Planet of the Apes #16, Marvel. My experience with Marvel’s POTA was the color series that reprinted the black-and-white mag’s adaptation of the original movie and Beneath the Planet of the Apes. That series ended at that point, but I would have loved to see it keep going so we’d get a color version of Escape, by Doug Moench and Rico Rival, which ran here. I was then — and remain now — a devout Apeophile.