Scott and Dan — with special guest Jerry Ordway — hit up the comics racks from 40 years ago!

This week for RETRO HOT PICKS, Scott Tipton and I are joined by DC luminary Jerry Ordway, who is contributing to The Art of Ominous Press — a hardcover celebration of the indie publisher’s 25th anniversary. The book is on Indiegogo and you can click here to take a look. By the way, 1980 was Ordway’s first year as a pro, as you’ll see below.

(Keep in mind that comics came out on multiple days back then — as has become the case now. So these are technically the comics that went on sale between Nov. 8 and Nov. 14.)

So let’s set the scene: Ronald Reagan had just defeated Jimmy Carter in the presidential election. Carter readily accepted the results. Martin Scorsese’s classic Raging Bull — starring Robert DeNiro and Joe Pesce — was released this week to critical acclaim. (DeNiro would go on to win the Best Actor Oscar for his brutal, yet soulful, portrayal of boxer Jake LaMotta.) Dallas was a huge, huge deal and this week was the last episode before we would learn Who Shot J.R., one of the biggest TV phenomena in history. Kenny Rogers’ Lady topped the Billboard 100 while Bruce Springsteen’s The River was the best-selling album. You probably couldn’t find two more diametrically opposed successful musical projects at the time. 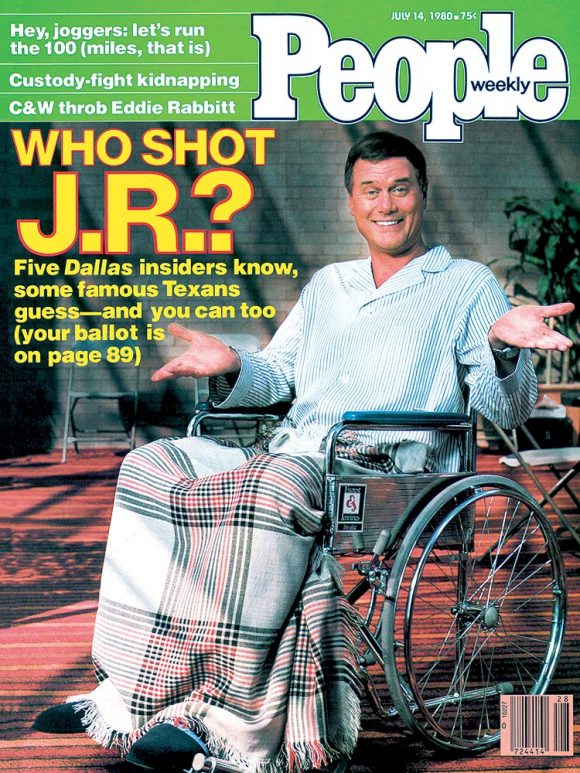 Jerry Ordway, Artist best known for Superman, Shazam!, All-Star Squadron and so much more. (And Marvel too!)

Boy, while I remember many of the comics that came out on this week in 1980, and bought several of them — like Thor, Doctor Strange, Spider-Man, and World’s Finest –there are three that spurred my memories, in good ways.

Captain America #254 stands out because it was part of a really nice run that Roger Stern and John Byrne produced, along with Joe Rubenstein on inks. Without digging that out of my collection, I remember several things — Steve Rogers was working as an artist, he had a new (non-Sharon Carter) girlfriend, and he was living across the Brooklyn Bridge from Manhattan! Those elements, along with great artwork, a great storyline that connected to the 1940s heroes the Invaders, were memorable. Cap fights a vampire?? Fun stuff. 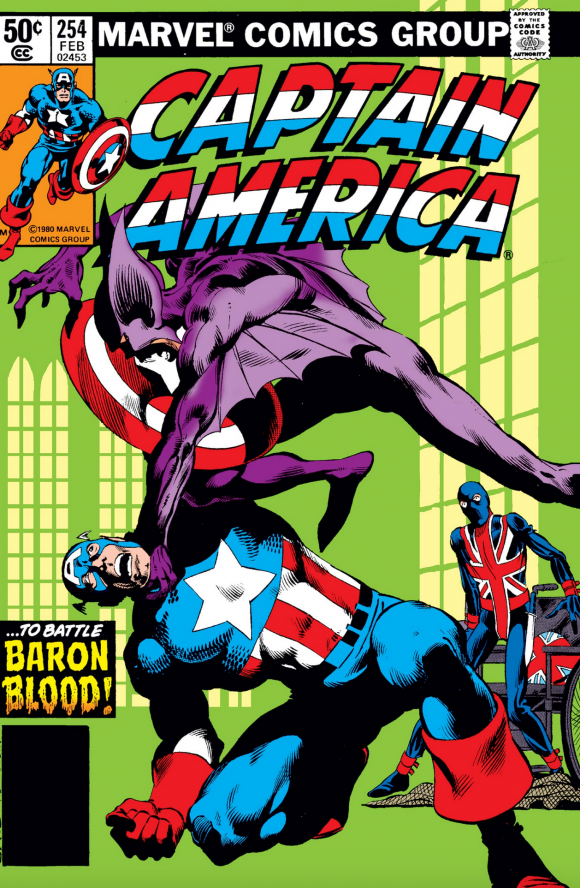 Scott adds: Cap battles a Nazi vampire with the help of a now-elderly Union Jack. This brief but memorable run by Roger Stern and John Byrne are some of my favorite Cap stories.

Epic Illustrated #4 continued Marvel’s experiment with a full-color slick magazine format that was meant to appeal to fans of the Euro-centric Heavy Metal magazine that was competing for space on newsstands. The appeal for me was that I loved working in full color, both at my then current 8-5 job at an advertising art agency, as well as in my spare time. The success of Epic Illustrated gave me hopes of getting a freelance assignment with Marvel doing full-color work. I had begun freelancing for DC Comics in July of 1980, working through the mail from my home in Milwaukee. Epic, therefore, was both a personal favorite, and a professional goal. 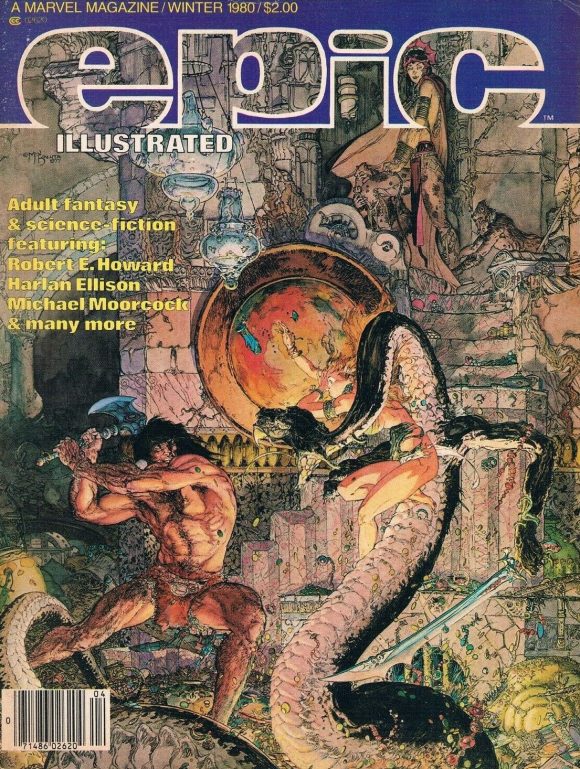 The New Teen Titans #4, from a fan perspective, was the first DC comic in ages that had fans talking! It was their most “Marvel-like” comic, with sales to match. At the time, DC sold well on the newsstands everywhere, but had trouble generating the same sales in comic-book stores, which favored Marvel Comics strongly. The Titans felt fresh, and the stories had a strong feeling of continuity, an element DC editorial had shied away from. Comic-shop fans like me loved the back stories, which drew upon older Teen Titans comics, and especially Doom Patrol issues. I think what Marv Wolfman and George Perez accomplished was to take familiar characters and imbue them with interesting conflicts that stretched over long story arcs. Even by Issue #4, the comic was a fan favorite. 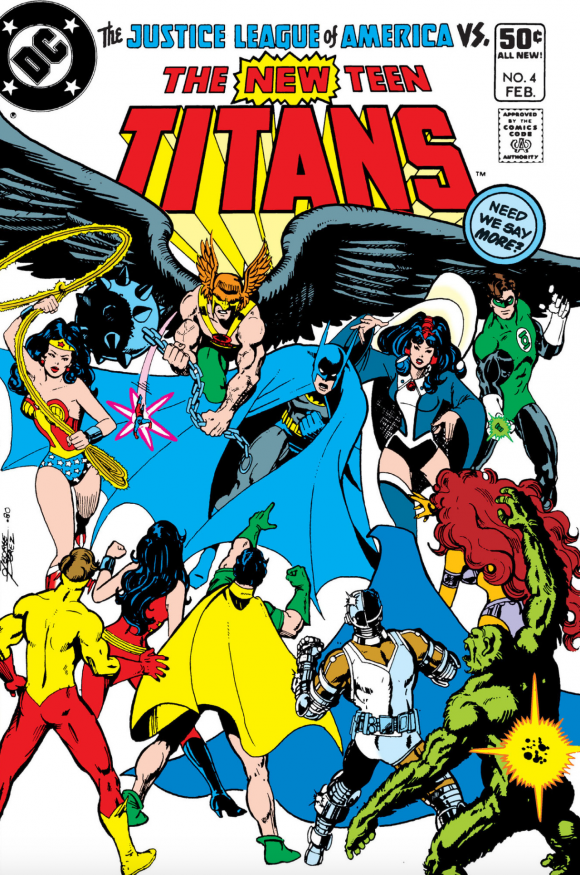 Dan adds: This was exciting and shocking all at once — the New Teen Titans vs. the Justice League! It amazes me that they didn’t build up to that over a longer period of time. The highlight? The easy yet devastating way Robin completely takes down Green Lantern.

Jerry adds: Here’s a fun way they are all connected for me. In September of 1980, after maybe six freelance inking assignments, DC called to offer me inking on The New Teen Titans! I was both thrilled and scared. I had a day job that I wasn’t interested in leaving, though the offer was certainly part of my dream, to work full time in comics. I turned it down because I was just not ready to leave my current job. Five years later I wound up working on Crisis on Infinite Earths with both Marv and George.

By November of 1980, I had been offered and accepted a job to ink/finish on a new comic, All-Star Squadron, with Roy Thomas and Rich Buckler. I planned a trip to New York City in December to attend “the Illustrators Workshop” a teaching event run by Bob Peak, Bernie Fuchs, Mark English and Fred Otnes. They were the tops in the commercial arts illustration field, and I would be bringing four of my painting samples for their critique. I would use the visit to allow me to meet my new bosses at DC Comics as well. 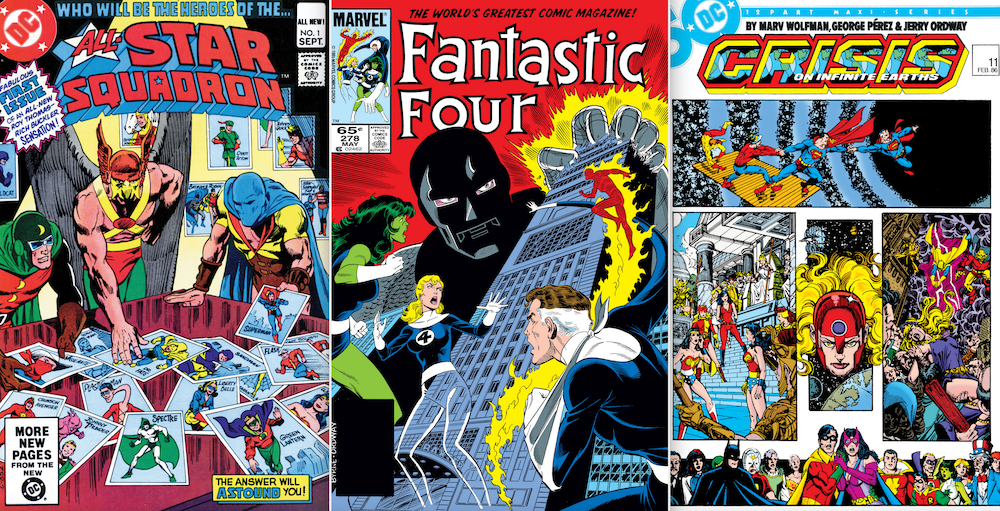 Through the generosity of Mike Zeck and John Beatty, I got in to see Archie Goodwin, editor of the Marvel Comics color magazines. I showed my samples, and while Archie complimented my paintings, he really liked my comic art pages. I told him I was already signed up at DC, so we parted as new friends.

On that brief trip, I also met Joe Rubenstein, which connects to the Captain America comic I mentioned earlier. And of course, I went on to work a fair bit with both Roger Stern, on Superman, and John Byrne on Fantastic Four, Superman, and other projects.

To say November 1980 was an exciting time for me, and for being a comic book fan, is an understatement.

Batman #332, DC. Part 1 of The Lazarus Affair — by Marv Wolfman, Irv Novick and Frank McLaughlin, with covers by Jim Aparo — which was the greatest Batman story never collected until earlier this year. The four-part epic doesn’t rise to the same level as Denny O’Neil and Neal Adams’ original Ra’s al Ghul saga, but it’s exceptionally entertaining and has been an absolute favorite of mine since it came out in 1980. I read The Lazarus Affair over and over and over and it serves as a great reminder that Ra’s is at his best when used sparingly, giving his stories a real “event” feel. He’s used way too much these days and it only serves to devalue his mysteriousness and make him far less threatening. (PLUS: The ish has the first-ever Catwoman solo story! Meow!) 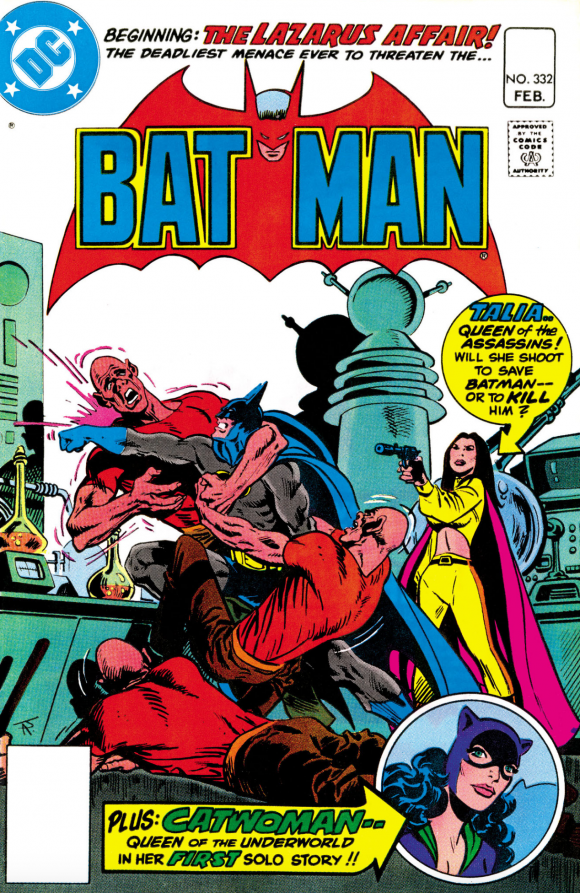 World’s Finest #267, DC. I’ve said it before but I’ve never been a big fan of the Superman-Batman team, so I only read World’s Finest in fits and starts. But I think it’s probably worth revisiting the Dollar Comics era, when it had a really diverse back-up line-up, such as Hawkman, Black Canary and the original Captain Marvel. 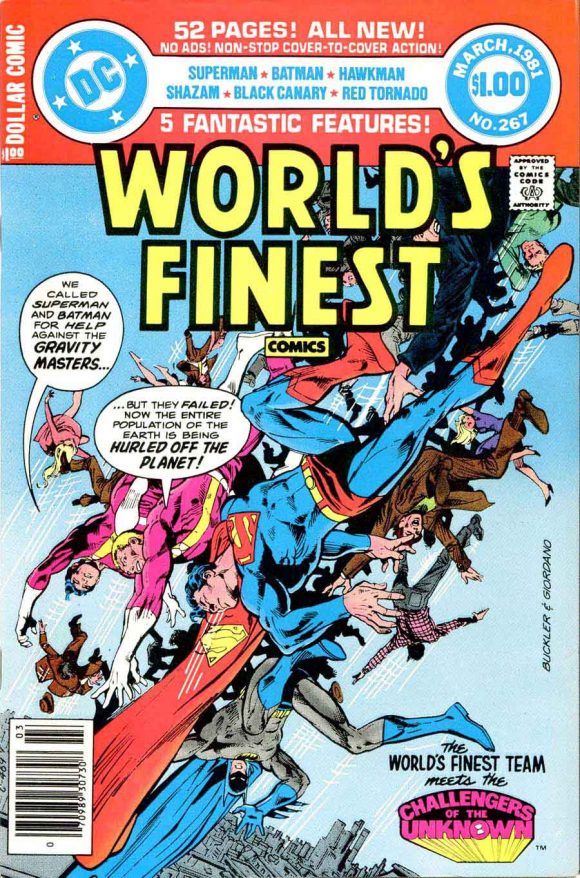 Micronauts #26, Marvel. The Micronauts didn’t cross over into the larger Marvel Universe very often, so when they did, it got your attention, as here when they got caught up in a big SHIELD/Hydra brouhaha. 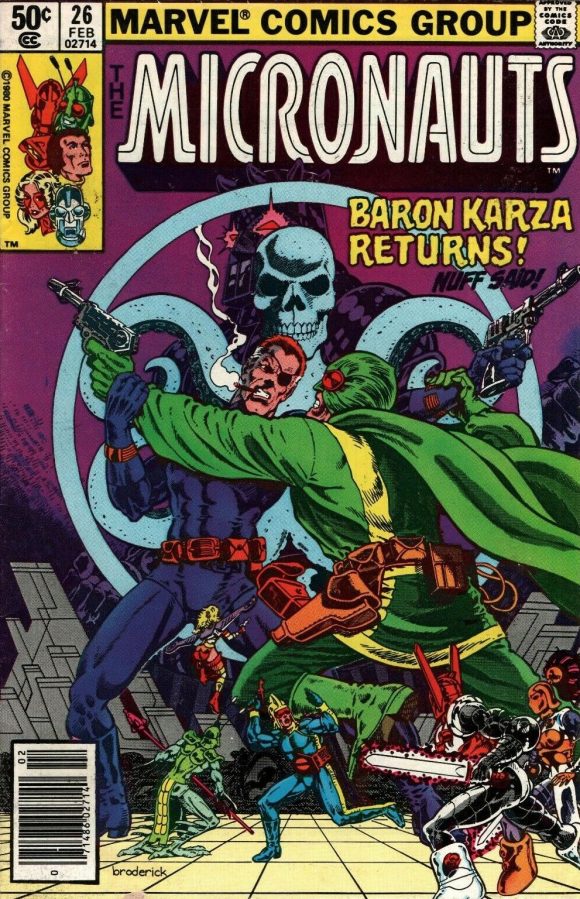 DC Comics Presents #30, DC. DC Comics Presents was like the Marvel Two-In-One of DC: Overshadowed by a much more popular team-up series in Batman’s The Brave and the Bold, DC Comics Presents had a very underrated run of satisfying Superman stories. Once we get to go back to conventions, I’m going to have to put together a run of these. 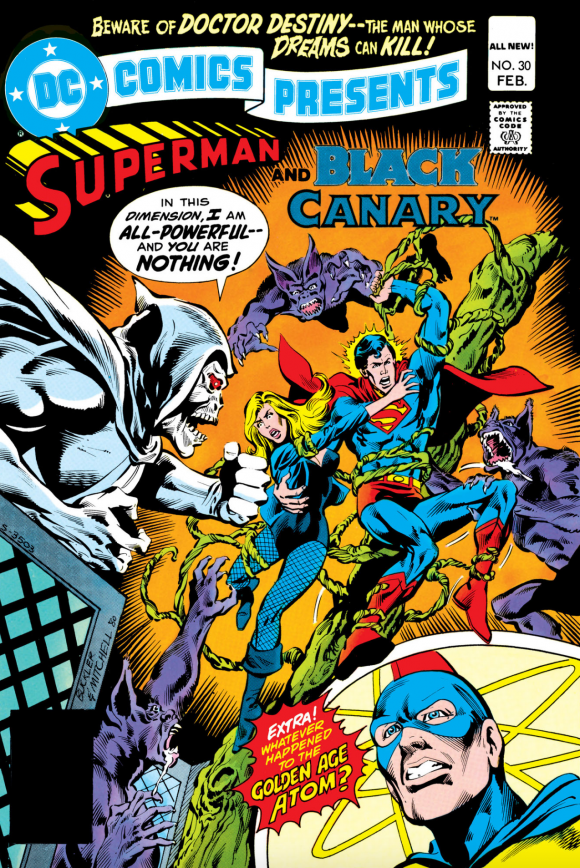 Superman #356, DC. It was way more years than I care to admit before I realized that Vartox was just a (very) thinly veiled parody of Sean Connery’s character in the bizarre ‘70s sci-fi flick Zardoz. 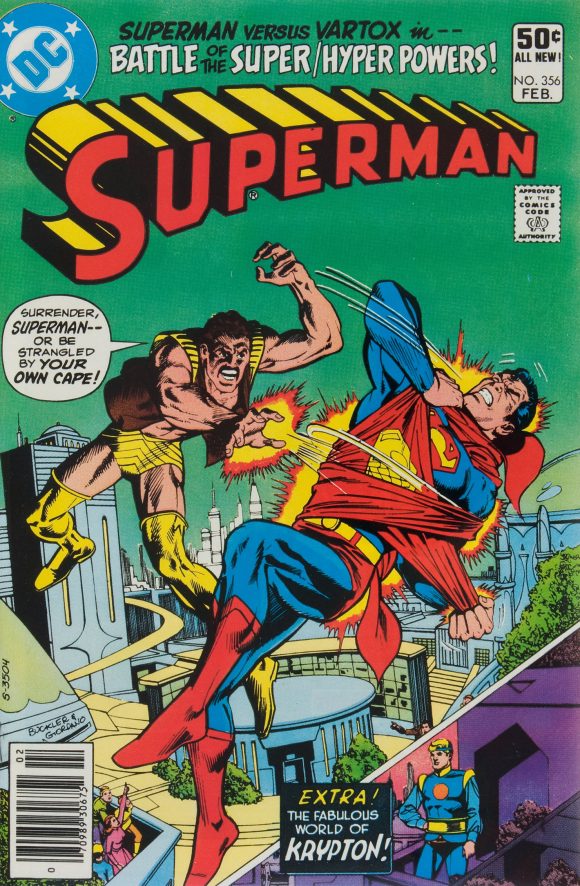