Scott and Dan — along with special guest David Tipton — hit up the comics racks from 41 years ago!

This week for RETRO HOT PICKS, Scott Tipton and I are joined by David Tipton — Scott’s brother and frequent writing collaborator. Their Deep Space Nine: Too Long a Sacrifice #3 is out this week from IDW. (Click here.) Anyway, we’re selecting comics that came out the week of Oct. 7, 1979.

(Keep in mind that comics came out on multiple days back then — as has become the case now. So these are technically the comics that went on sale between Oct. 4 and Oct. 10.)

So, let’s set the stage: Jimmy Carter was in the White House but the biggest challenge of his presidency — the Iran hostage crisis — was about a month away. (It would prove instrumental in his re-election defeat a year later.) Alice, starring Linda Lavin and Polly “Kiss My Grits” Holliday, topped the Nielsens for the week. One of the era’s defining movies — 10, with Bo Derek and Dudley Moore — hit theaters. Don’t Stop ’til You Get Enough, by Michael Jackson, was the No. 1 single on the Billboard 100, though the insanely catchy My Sharona, by The Knack, was also a huge hit. Led Zeppelin’s underrated In Through the Out Door was in the midst of a seven-week run as the top-selling album.

Can you dig it?

Amazing Spider-Man #200, Marvel. Amazing Spider-Man #199 ended on a cliff-hanger, with Mysterio injecting Spider-Man with depressants. At the beginning of this double-sized #200, Spider-Man discovers the drug has robbed him of his spider-powers. And Aunt May is dead. Well, turns out she’s not dead, but in finding this out, a weakened Spidey is forced to confront the burglar who killed his Uncle Ben. Spider-Man rips off his mask in anger to show the burglar (who oddly goes unnamed) who he is, and in the slugfest that ensues, the burglar collapses and dies from a heart attack, preserving Spider-Man’s secret identity. One page of this story was written by Stan Lee (and readers were invited to figure out which page, with the first correct answer winning a “non-bronzed no prize”) and the rest was written by Marv Wolfman. 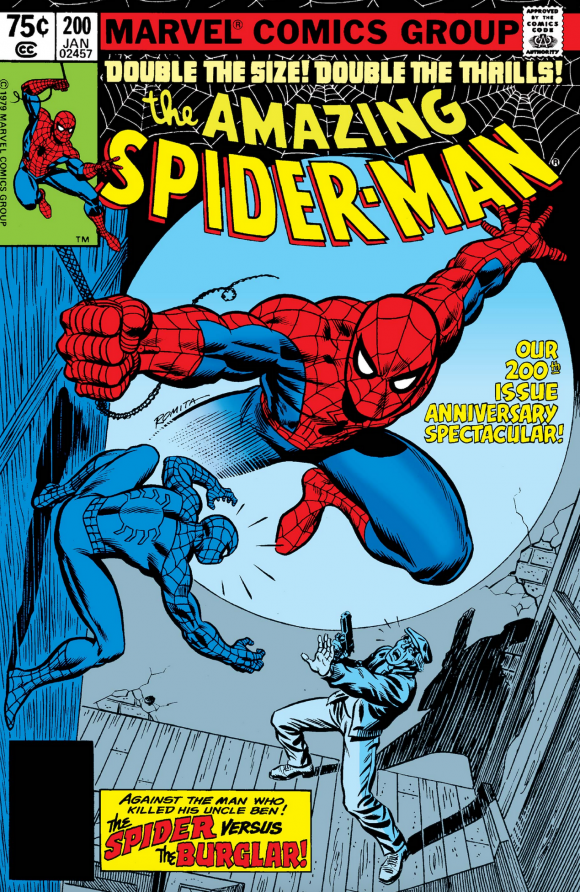 Scott adds: The return of the burglar who killed Uncle Ben! I read this as a kid in the waiting room at the dentist’s office.

Dan adds: Click here for much more on this issue.

Battlestar Galactica #11, Marvel. Script, plot, and layouts by Roger McKenzie and Walter Simonson! Starbuck plays poker while the Galactica and its rag-tag fugitive fleet drift aimlessly through an interspatial void. Felgercarb! Fortunately, Starbuck meets some Cylon-hating friends who can help the fleet escape the void, but they might just want to hold on to Starbuck as their new general. The original Battlestar Galactica was still quite popular in late 1979 — even though ABC cancelled the show prematurely (and later regretted it) — and Marvel’s two-year run of comics is a great reminder of that. 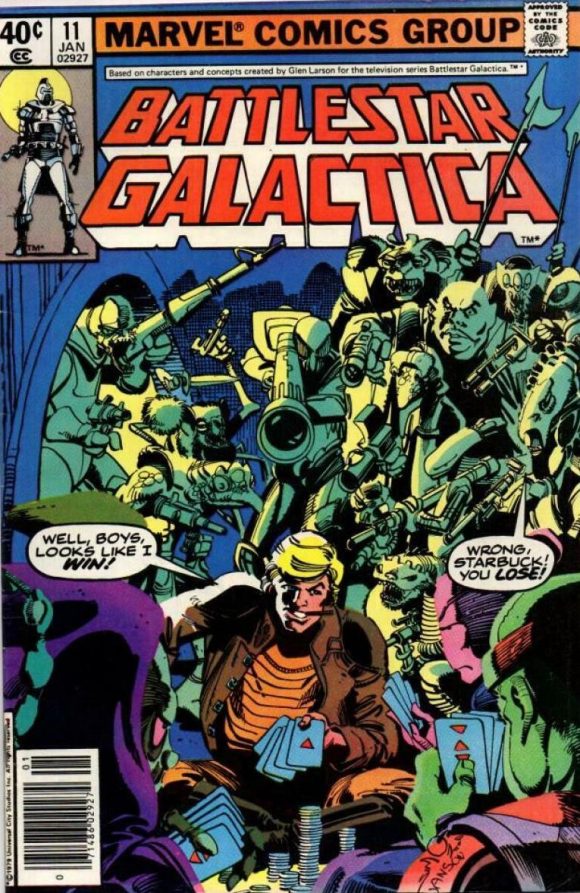 Micronauts #13, Marvel. In the aftermath of the defeat of Baron Karza in Issues #11 and #12, Micronauts stepped away from the long-arc storytelling a little to do some close-ups on characters and regions of the Microverse. In Issue #13, we find out that Bug is still alive and has been blown through hyperspace back to his home planet of Kaliklak. As Bug prepares an assault to free his homeworld from Baron Karza’s dogsoldiers, Commander Rann convinces Mari, Biotron, and Microtron to head out for more adventures. Oh, and back on Earth, S.H.I.E.L.D. has a briefcase filled with a Micronaut Battle Cruiser, so that’s probably bad news. Written by Bill Mantlo, with art by Howard Chaykin and Al Milgrom. The scenes on Kaliklak diverge quite a bit from the style of the Micronauts toys; it’s a nice example of how this series was influenced and inspired by the Mego line, but never constrained by it. 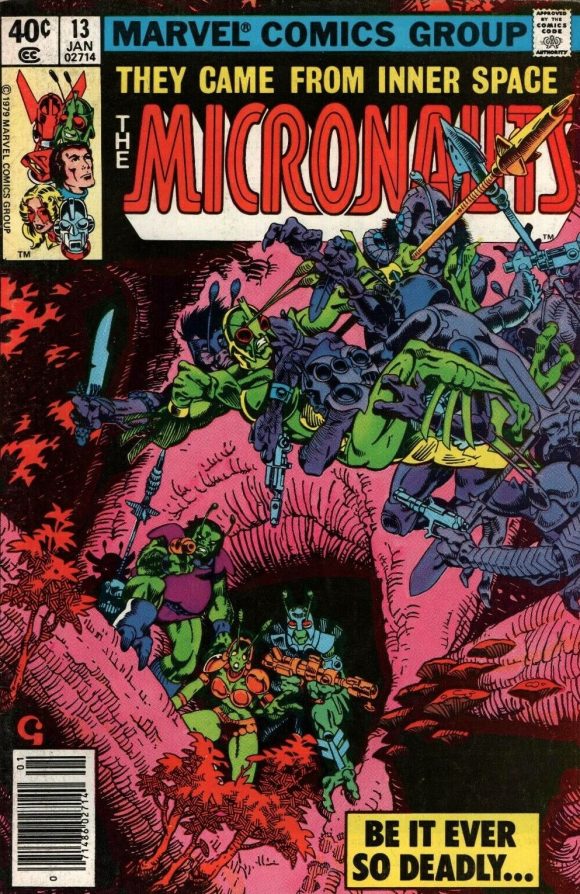 Scott adds: Bug returns to his home planet of Kaliklak! I remember being excited to finally see Bug’s homeworld, but being a little turned off by the slightly harsher artwork by Howard Chaykin, having been spoiled by a year of beautiful Michael Golden pages.

Dan adds: Click here for an EXCLUSIVE INSIDE LOOK at the upcoming Michael Golden’s Micronauts Artist’s Edition from IDW. You’ll be glad you did!

Fun and Games Magazine #5, Marvel. Funny, I never bought a single issue of this when I was little, but we had all of the big squarebound Marvel Fun Book collections. It’s like I refused to buy it off the spinner rack because it wasn’t a comic book. 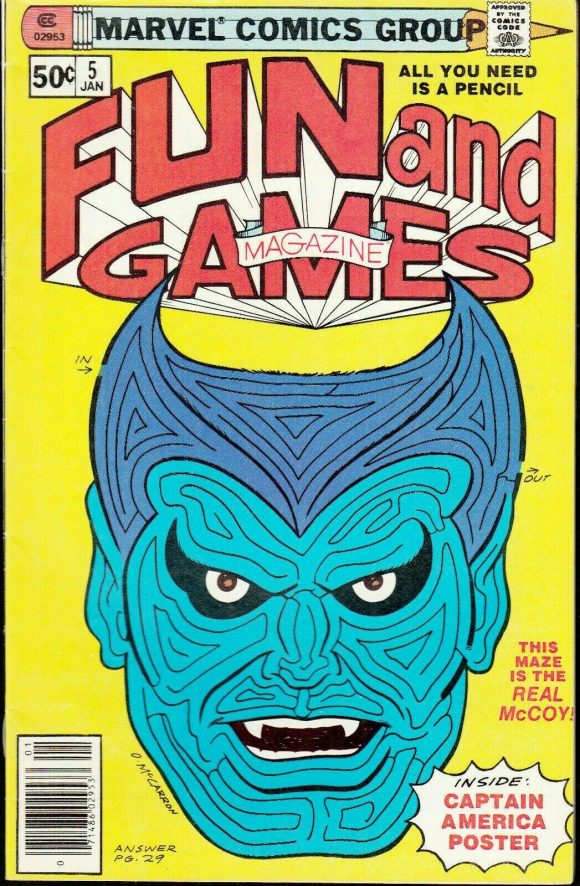 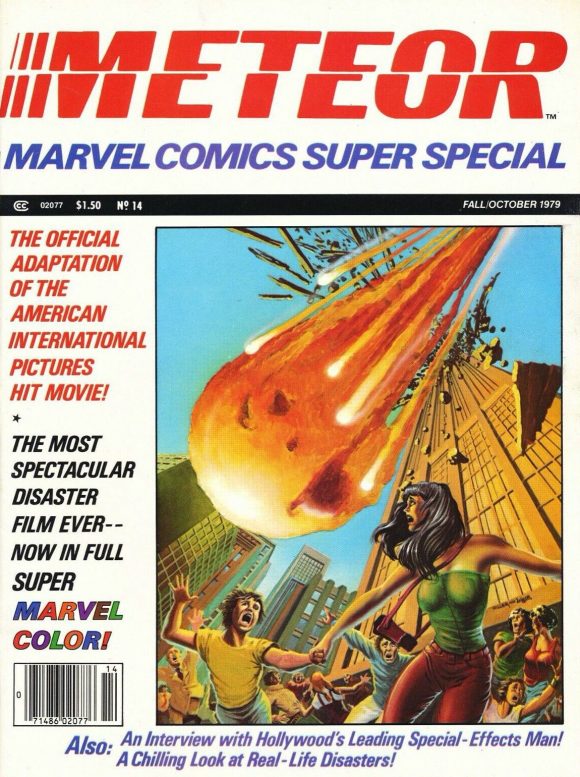 Dan adds: I saw it in the theater! Sean Connery was in it! In my 12-year-old mind it was akin to having James Bond try to blow up a meteor. I have a bad feeling this movie does not hold up today — and I don’t intend to find out. But, hey, Fun Fact: That’s a Frank Miller-pencilled cover painted over by Peter Ledger.

The Hulk! #18, Marvel. Don’t you wish Marvel would add some of their old ’70s mags to their Facsimile Edition line? I sure do. And dig that fantastic Bob Larkin cover! But what is this “Mightiest Mortal” business? 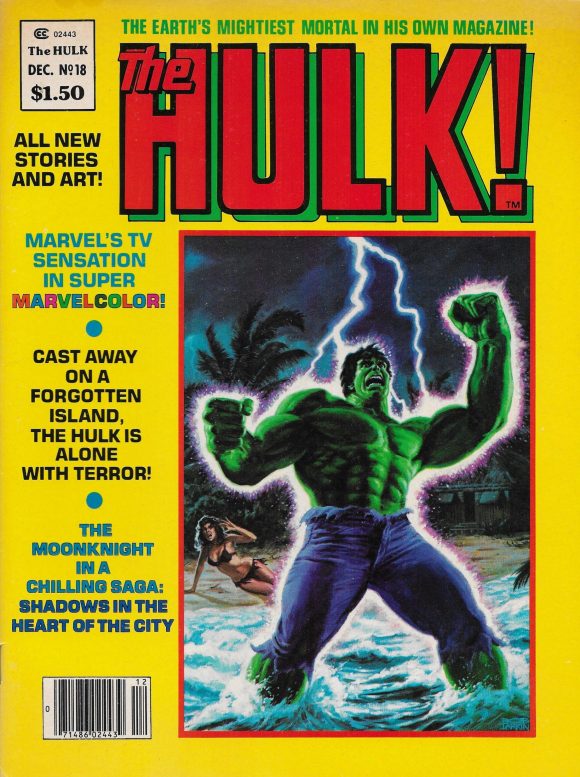 Hey, Where’s the DC? For whatever reason, DC’s comics in Oct. 1979 didn’t start coming out until the 11th. This makes Young Dan sad. (But at least Batman came out that day!) 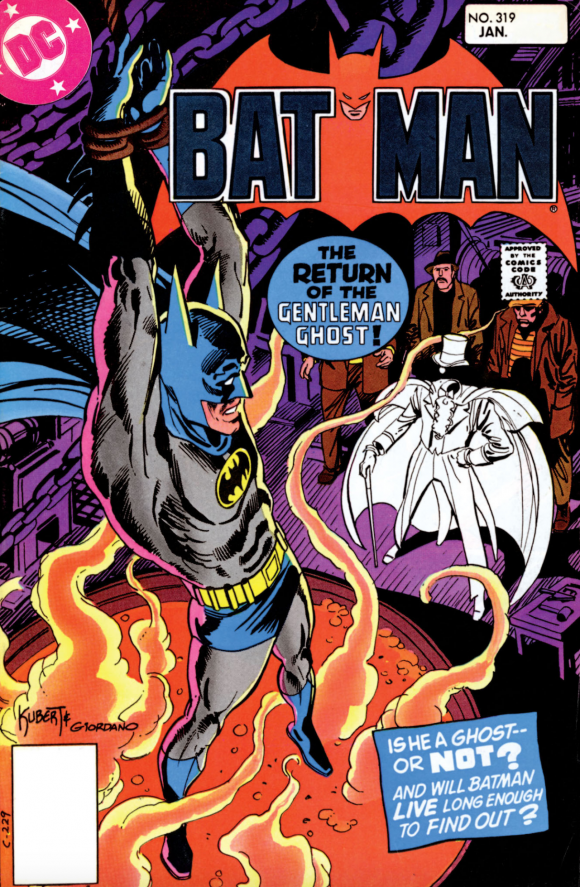