Hey folks, hope all is good. We’re covering a lot of ground here, so get in the car and bring some snacks.

Wolfman is a master when it comes to “perception of change,” which is a classic, elemental comic book trick — where things “change” but don’t really, in the long run. Pete gets a new job, but it’s at a newspaper competing with The Daily Bugle, so while it’s “different,” things are still essentially the same.

Spider-Man’s criminal record is cleared, only to have his rep dragged through the mud soon after, making him more of a public menace than before. It’s smart, Comics 101 storytelling, and it gives the series a much-needed shot in the arm. (I’ve talked already about how underrated the Wein run is, and I think a big reason for that is Wein’s lack of a “Death of Gwen”-style moment. Click here for a more in-depth look.) 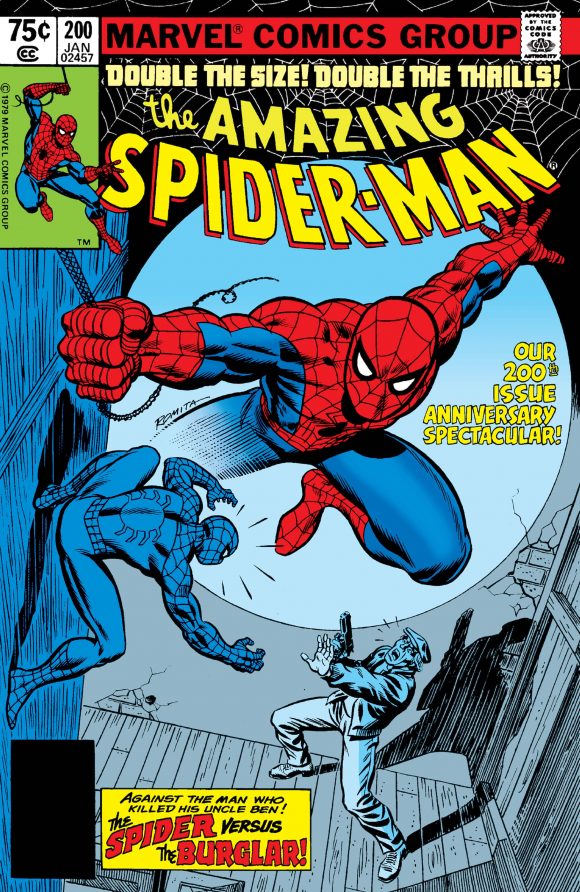 Anyway, I’d forgotten how relatively short Marv’s run was, and it — like Wein’s — doesn’t seem to get the weight it deserves in the overall Spidey pantheon, for my money.

Case in point: Marv’s slow boil that builds toward the big reveal in Issue #200 is sharp, A-list story construction, and never feels forced or schlocky. It does a wonderful job honoring the past, too — with a smart, subtle nod to the Lee/Ditko run in the return of Mysterio alter ego Ludwig Rinehart, plus, of course, the return of the Burglar, the unnamed criminal who murdered Peter’s Uncle Ben and, in effect, created Spider-Man.

Before the run-up to #200 — publication date Jan. 1980 — we see the conclusion of a Spider-Slayers story, which sees Smythe dying of a cancer gained from fiddling with his killer monsters. He, of course, blames J. Jonah Jameson, so he kidnaps Jameson’s son John (aka Man-Wolf) and pits him against his dad and, in turn, Spider-Man. The story ends with Man-Wolf falling to his “death” and Jonah losing his mind  — literally, though that won’t kick in for a bit — blaming Spider-Man for killing his son and using all of his journalistic tools to enact revenge.

It finally feeds some motivation through Jonah, who has often had murky, vaguely defined reasons for hating Spider-Man. His gradual mental breakdown is also done really well, and it’s another example of Wolfman playing the effective long game. 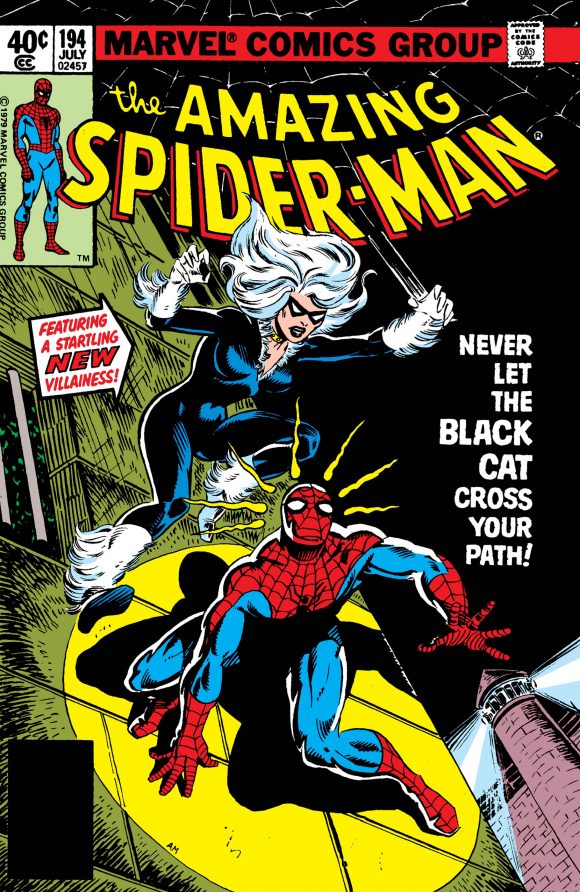 Then we get the introduction of the Black Cat, perhaps Wolfman’s most lasting addition to the Spider-Man mythos. All of the key elements are there — the flirtation, the “bad luck” power (which is later ignored for a time), the conflicted motivations, and the chemistry between Spidey and Black Cat.

I’d always felt like the Cat was Spidey’s version of Catwoman, and that’s not a criticism. You could also argue she’s a softer, less murderous version of Elektra, too. It’s a role that hadn’t been filled yet, and Wolfman does a nice job of creating a fully fleshed-out character loaded with complexities and conflict. The debut two-parter ends with the Black Cat apparently dying, but savvy readers knew that wouldn’t be the last we’d see of Felicia Hardy.

Issue #196 signals the formal beginning of the final arc leading up to #200, with Peter receiving a suspicious telegram informing him his Aunt May has died. Big credit to Wolfman for playing this as straight as possible, with a funeral and all the bells and whistles of a real death — even, years later, having read this many times, I felt like “Huh, maybe she DOES die here.” It’s not the first nor will it be the last time Aunt May is believed dead, but it may be the best execution of a plot thread that will never fully be resolved. 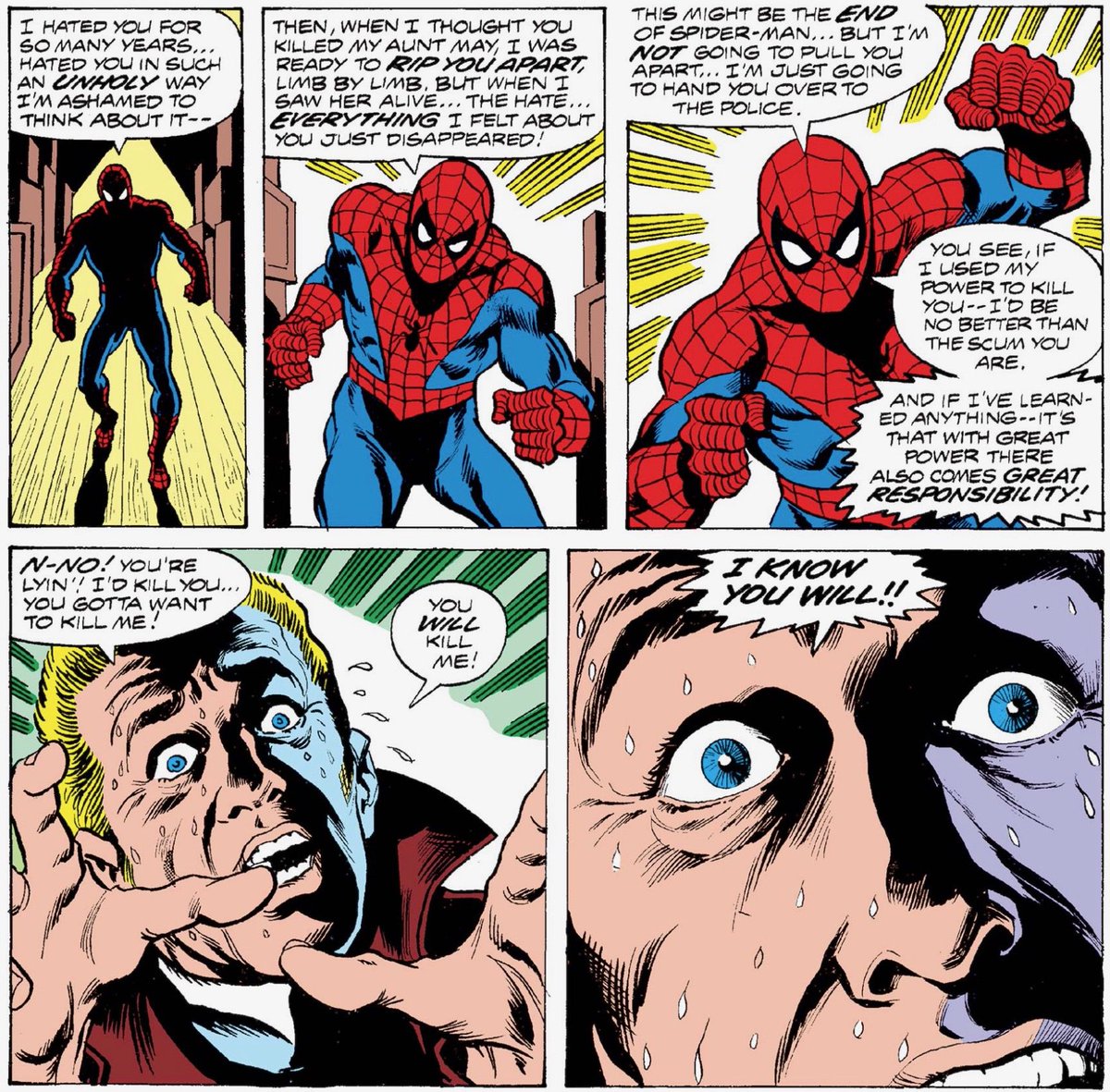 My one quibble with these issues — which conclude in a strong, meaningful battle between Spider-Man and the Burglar, with a (surprise!) living Aunt May looking on — is that it feels like it goes on too long. There’s a brief Kingpin interlude that’s underdeveloped, and the villain is diminished a bit by being used as a setup for… Mysterio?

Again, Wolfman does a fantastic job of stretching the story, but the Kingpin appearance — his first since his “death” in Wein/Andru’s #164 — feels rushed and a bit like table-setting for the eventual big fight. Again, not bad, but also a bit awkward.

But writing monthly comics back then was a very different ballgame than today — with different factors and less flexibility in terms of deadlines and creator vision. So, it could’ve just been that Wolfman had to shoehorn a Kingpin story for some weird editorial reason. It’s a minor hiccup in a pretty good run of issues that end on a remarkable high note. 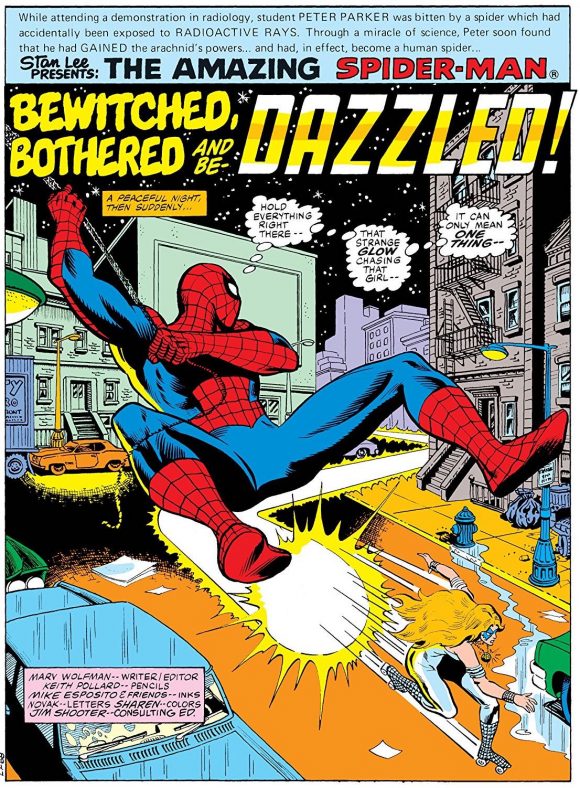 Though Wolfman pens four more issues after the anniversary, this is, for all intents and purposes, the end of his run. What follows is a well-paced Punisher two-parter (with Punisher using rubber bullets regularly!) and a Dazzler guest spot that features the return of Lightmaster after his debut in the early issues of Peter Parker, the Spectacular Spider-Man (more on that book later). Wolfman closes out with the return of the Black Cat, which I’ll examine a bit next time.

Overall, I think the Wolfman run is great — he starts off with lots of sturm und drang — unafraid to shake things up.

He drops Peter/Spidey squarely in the gray areas of life, too — dating a married woman, struggling to survive, willing to quit jobs and be honest with people to move forward. Sometimes it works better than others — Pete dressing down Betty and Ned Leeds was a bit clunky to read, and one has to think Wolfman felt the same way, as he tries to reposition it as a masked good deed.

Wolfman’s wordplay, especially when writing Spidey, is the best since Stan Lee — genuinely funny, joyous, and timely. He writes both sides of the character well, and he’s remarkably consistent for most of his arc. My only regret is he only stuck around for 20 or so issues. I would’ve really liked to see him play with some of the other iconic Spidey rogues. 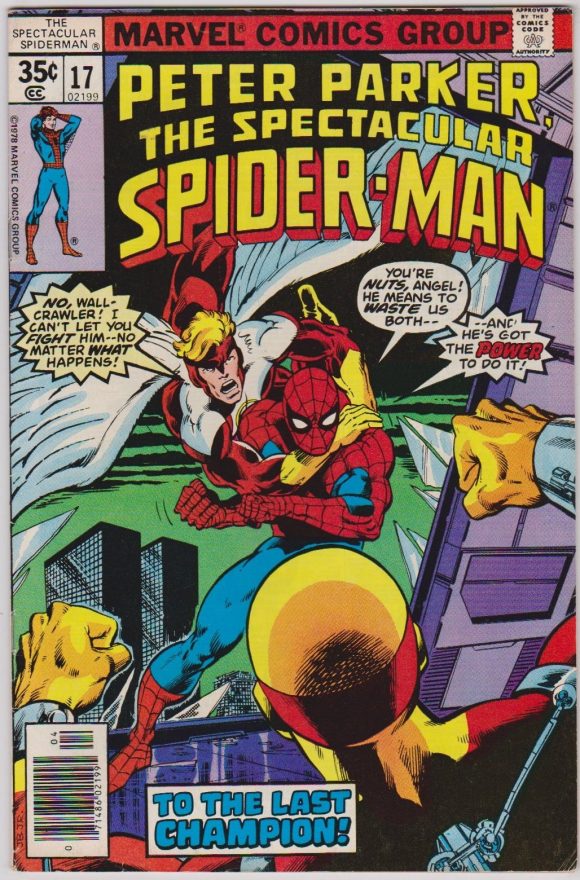 Now, folks, before we move on to PPSSM, it’s time for a hard conversation.

When I started this epic reread, I said I’d keep going until I got bored. And, dear reader, that almost happened.

As I noted recently, I hit a wall while reading that first Peter Parker, the Spectacular Spider-Man Masterworks edition: The creative changes (three writers in the first four issues!) made for awkward reading that not even superb Sal Buscema art couldn’t save. I powered through the first few issues of Bill Mantlo’s run (which, spoiler alert: gets a lot better!), but still felt like I was spinning my wheels. We were almost at empty.

And, as much as I liked the Wolfman run, I really, really, really missed artist Ross Andru. He’s, in my opinion, one of the most underrated Spidey artists ever and seeing him depart was really tough. It’s not a knock on the workmanlike Keith Pollard — who is solid. But Andru is just a hard act to follow. Pollard, a fine draftsman, also suffers a bit from too many cooks, with various inkers trying to define his style. For my money, his art looks best when paired with frequent Andru collaborator Mike Esposito. The 1-2 punch of a clunky 15+ issues of PPSSM and rough transition to a post-Andru world made me reconsider the whole endeavor. 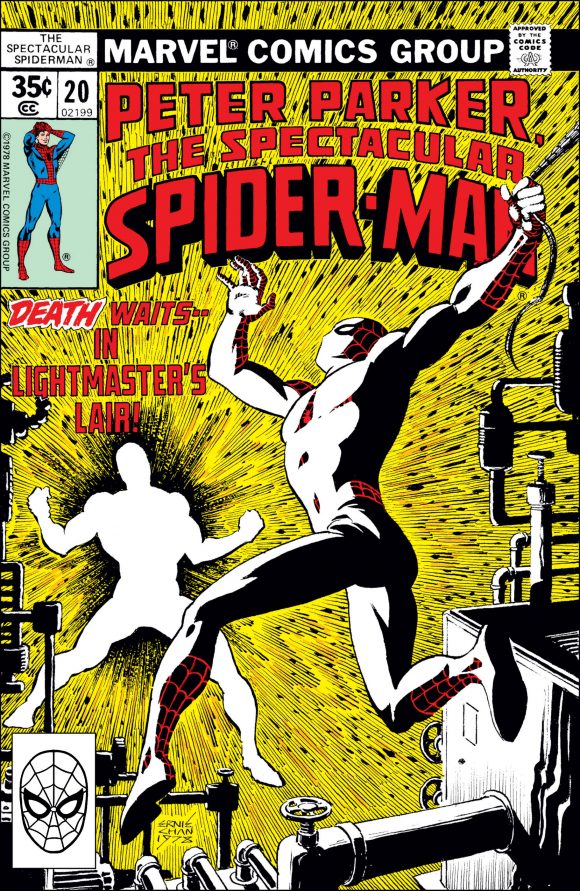 But here I am! We made it through — and I think the future is looking pretty good. After Wolfman/Pollard ride off into the sunset, we see the legendary Denny O’Neil step in as writer, with some guy named John Romita Jr. taking over the art chores. We’re almost at the classic Roger Stern/JRJR run, too, which is a personal favorite. So, short version? I’m in it to win it.

Before I go, I should note that the reading timelines are not in sync for me — I’m further ahead on ASM than PPSSM, mostly because that first Spectacular volume was rough going, as noted. But for now, I’m making progress on the Mantlo run, and it picks up steam. Sal is still killing it on art, and Mantlo is really getting his sea legs.

The highlight so far, just as a sheer power move, is a two-issue Champions series finale that… happens in PPSSM (!) The return of the Beetle is fairly forgettable, but Mantlo does a nice job bringing the Enforcers (ha!) back as grunts for Lightmaster (lots of Lightmaster, lately!). More on that series soon.

— Wolfman does a great job showing how utterly destroyed Pete would be if Aunt May were to die. It’s believable and doesn’t feel forced.

— The long-running subplot focusing on the mysterious publisher of The Daily Globe is well done, popping up every few issues or so. It feels like this kind of long-thread writing style isn’t as common today, with ever-changing creative teams and relaunches, which is a shame.

— I, for one, am all for a Pete/Betty romance — and I wonder if that’s where Wolfman was heading before editorial pooh-pooh’d Spidey dating a married woman. She was really given short-shrift by Stan Lee toward the end of his run with Ditko, and basically written off by Conway and Wein in favor of MJ. She strikes me as a tough, hardscrabble, independent woman (when written well), and I liked the complex dynamic between her and Pete. But it wasn’t meant to be! — We’re reaching a point where you start to understand, as a reader, that there’s a greater world of Spidey adventures beyond the flagship title — and that can be problematic. Stuff like the return of Silvermane (which happened in Daredevil); the freezing of John Jameson; and the interplay between Amazing and Spectacular and, to a lesser degree, Marvel Team-Up, crops up with more frequency. It’s only mildly annoying, and often serves as an incentive to dig up the issues — or, if I’m feeling lazy, to do a quick Google search. Just another signal of how popular Spider-Man has become at this point, and how much he’s evolved from the quirky, outsider hero he first debuted as.

— Mysterio will never be an A-list villain, sorry. Though I did very much enjoy Wolfman’s take on why he shifted gears to running a nursing home. Guy just wanted to make some money!

— Pete messing up a last-chance date with Mary Jane was tough to see. Come on, Pete! 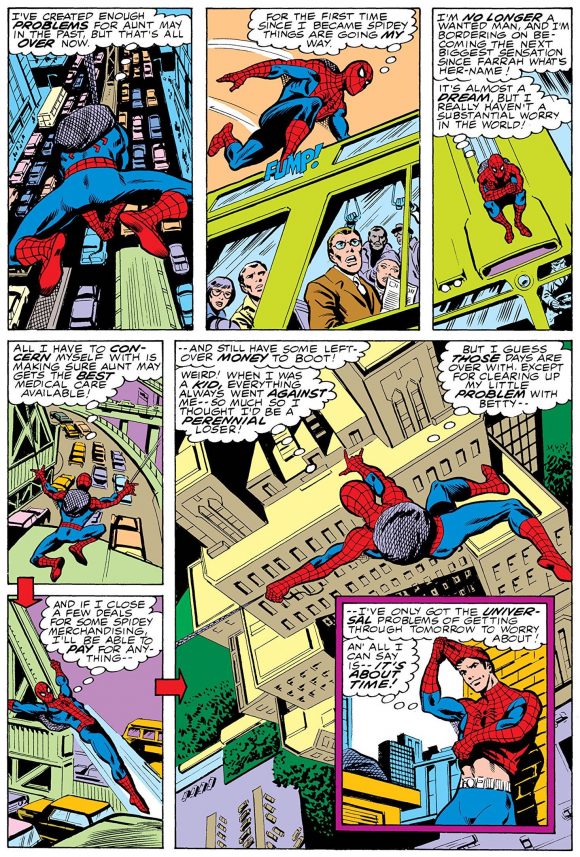 — MARV WOLFMAN Had an AMAZING Handle on SPIDER-MAN. Click here.