Scott and Dan — along with guest Andy Lanning — hit up the comics racks from 44 years ago!

This week for RETRO HOT PICKS, Scott Tipton and I are joined by comics writer Andy Lanning (Guardians of the Galaxy, Nova, Legion of Super-Heroes) in selecting comics that came out the week of July 21, 1977.

By all means, you should check out Andy’s latest — Resolution, co-written by Ron Marz with art by Rick Leonardi. The project — which is being crowdfunded on Zoop — tells the story of Xaan Maddox, retired from a heroic career serving in the galactic peace-keeping force called The Resolute. But Xaan’s solitary life is upended when her archnemesis returns.

In addition, Andy and Ron put together a great piece that you should check out — THE TOP 13 COSMIC TEAMS IN COMICS — RANKED. Click here for that debate starter.

(Keep in mind that comics came out on multiple days back then — as has become the case now. So these are technically the comics that went on sale between July 18 and July 24.)

So let’s set the scene: Jimmy Carter was about six months into his only term. This week, he met with newly elected Israeli Prime Minister Menachem Begin in Washington. The following year, Begin and Egyptian President Anwar Sadat would sign the Camp David Accords.

The No. 1 movie in the country? Star Wars! The top-rated TV program was the 1977 Major League Baseball All-Star Game, which was played at Yankee Stadium. (The National League won 7-5. The NL used to dominate the Midsummer Classic.) Gotta say, the Billboard 100 didn’t have its greatest week ever: Barry Manilow’s Looks Like We Made It was the singles-chart leader. On the other hand, Fleetwood Mac’s era-defining Rumours was the best-selling album.

Living in the UK, I was raised on a diet of 2000AD, Action (not the Superman comic) plus Marvel UK weekly reprints of US titles, which were in glorious black and white! I had to hunt out my fix of colourful US comics at various newsagents, where the spinner racks were filled with a random collection of titles that would change month by month.

Nova #14, Marvel. I was really lucky to find Nova #1 at one of my newsagents and even luckier that it appeared every month for the next year or so. Issue #14 was one of the last I read for a while as it disappeared from the rack but I was able to keep up with the story, albeit in black and white, in the pages of Spider-Man Comics, a weekly Marvel UK reprint. I’ve been a devoted Nova fan ever since and it was one of the comics that made me really appreciate Sal Buscema and Carmine Infantino’s wonderful artwork. 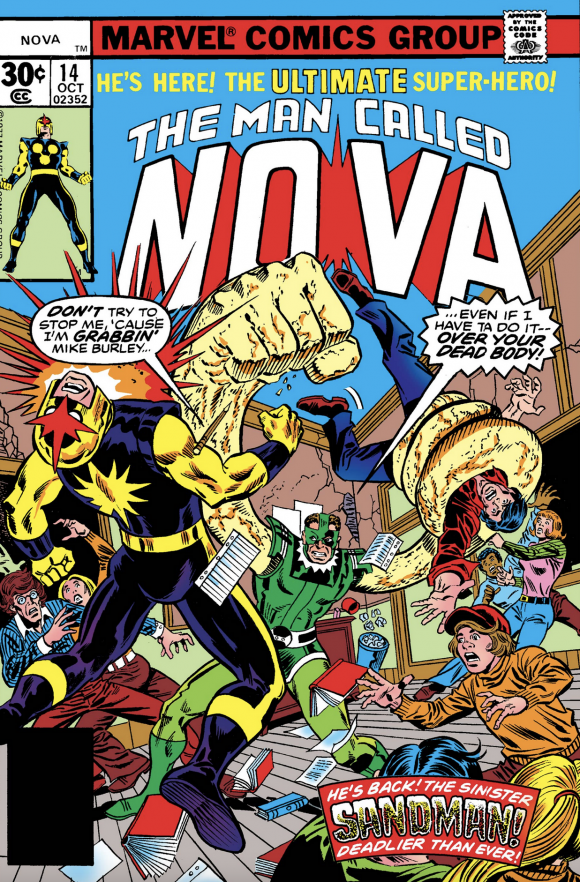 Turok, Son of Stone #111, Gold Key. As I said, finding US comics was a challenge for a kid living in a quiet seaside town but I had family who lived in London — THE BIG CITY — and whenever I visited them would make a beeline to the local newsagents because they had a whole display of different comics for me to buy! Many of these were from different US publishers like Marvel and DC and this is where I first discovered Archie, Casper the Friendly Ghost and Richie Rich. It was also my first exposure to Gold Key, which at that time was publishing TV tie-in titles like Star Trek and Land of the Giants and also classics like Turok, Son of Stone. A wonderful blend of Wild West and dinosaurs, what’s not to love? 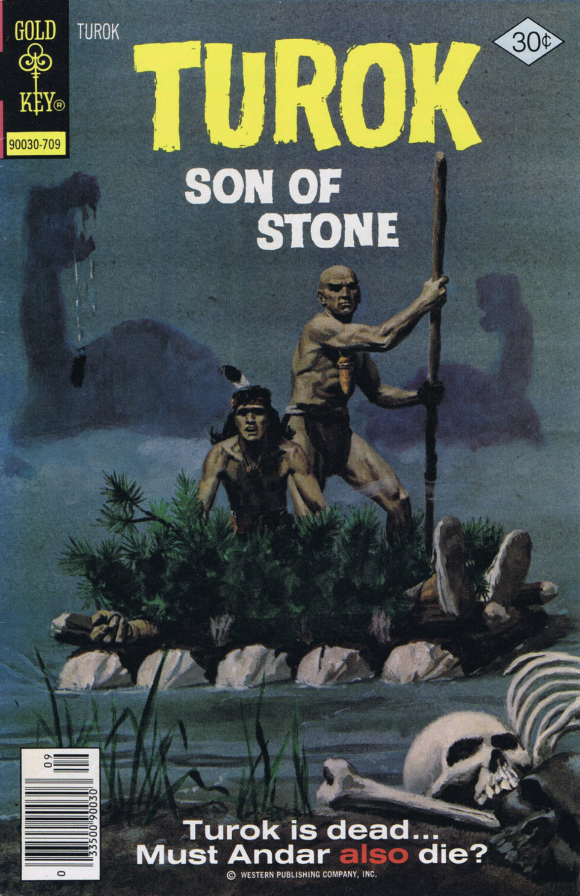 Challengers of the Unknown #83, DC. Another comic I was able to get a run on, I followed this up to Issue #87, which coincided with Keith Giffen’s run as artist. I fell in love with his artwork, it was around this time that I started to really appreciate Jack Kirby too and Giffen’s art was obviously influenced by Kirby but his layouts and storytelling were really striking. From here on in, I would try to follow anything he drew, which in turn led me to the Legion of Super-Heroes. 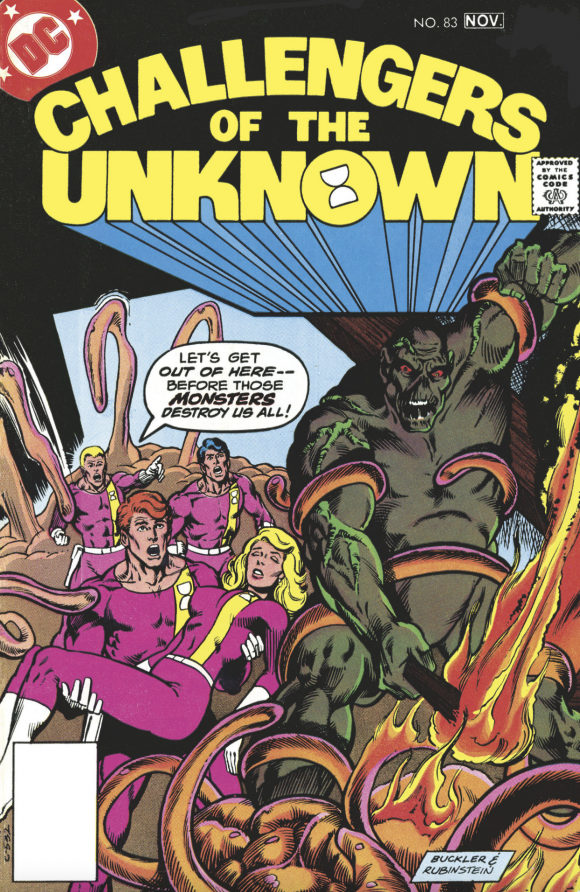 X-Men #107, Marvel. I think it’s pretty obvious I LOVE sci-fi and cosmic comics. The Cockrum/Claremont reboot of the X-Men provided some wonderful stories but none better than the original Phoenix saga and #107 blew me away — and it introduced the Imperial Guard! Wow, good times! 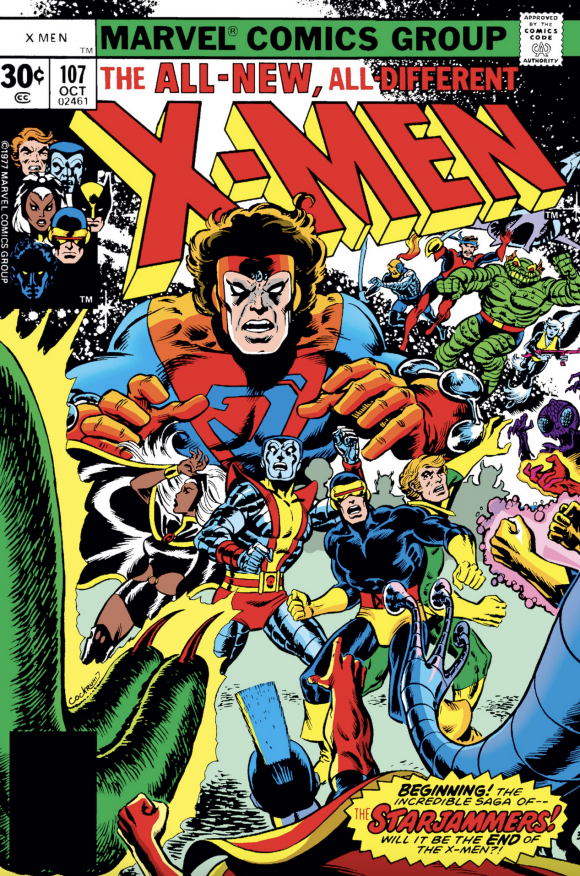 Conan the Barbarian #79, Marvel. I had discovered the Conan novels mainly because of the wonderful Frank Frazetta covers, which led me to discover the Conan magazine and the glorious artwork of Barry Windsor-Smith and the awesome teaming of John Buscema and Alfredo Alcala. I would grab anything Conan from then on because the art bar had been set so high. I think this is when I first really became aware of what an inker could bring to the table in the production process of the art.

This is a great issue with an artist who you wouldn’t associate with our favourite Hyborian, Howard Chaykin. Chaykin does a great job and is ably assisted by Ernie Chan on inks, adding enough Alcala-esque flourishes to make this sit quite comfortably alongside the established style. 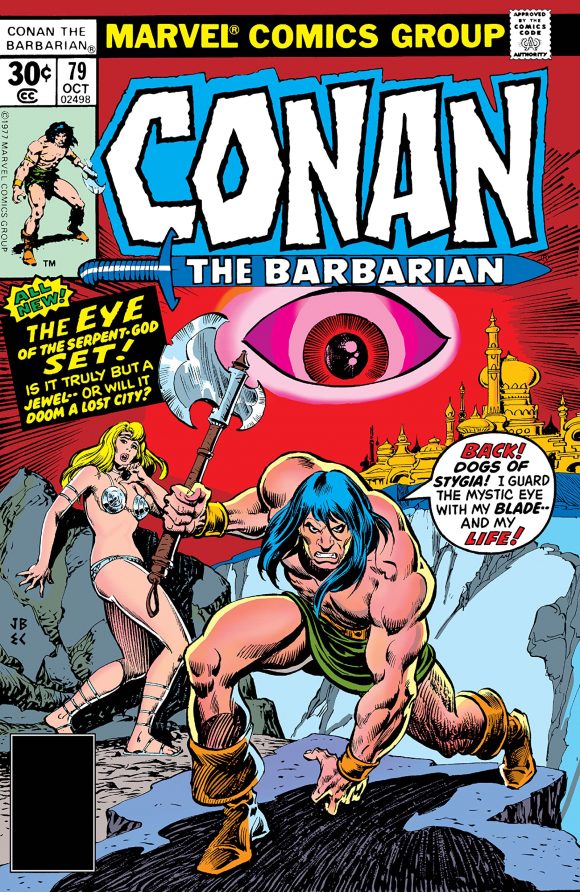 Star Wars #4, Marvel. I have to throw one title in that wasn’t in the July 18-24 range: Star Wars #4 came out the week before but I would be remiss if I did not to make mention of this. I said above that I didn’t get to see Star Wars the movie until the summer of 1978, and it wasn’t released in the UK until December 27, 1977, but the comic-book adaptation was out in October and I got (and still have as very prized possessions) the oversize Treasury Editions and also managed to pick up Issue #4 of the regular edition. Needless to say, both the comics and the film blew my tiny mind and continue to influence my storytelling to this day. 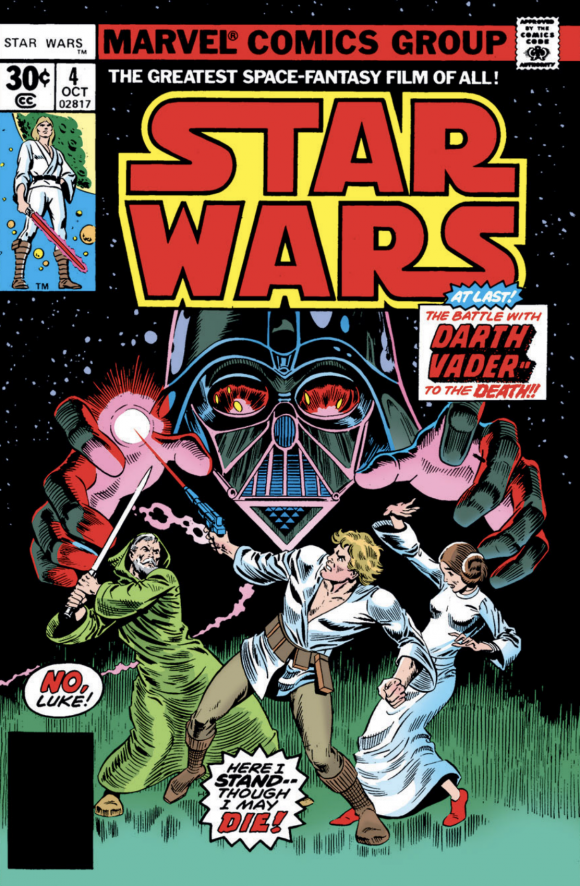 Walter Lantz Andy Panda #21, Gold Key. I may have mentioned in the past my love for little-known Andy Panda sidekick Charlie Chicken. I just remember him being an amiable chap who would get really angry and start tearing things up every now and then. 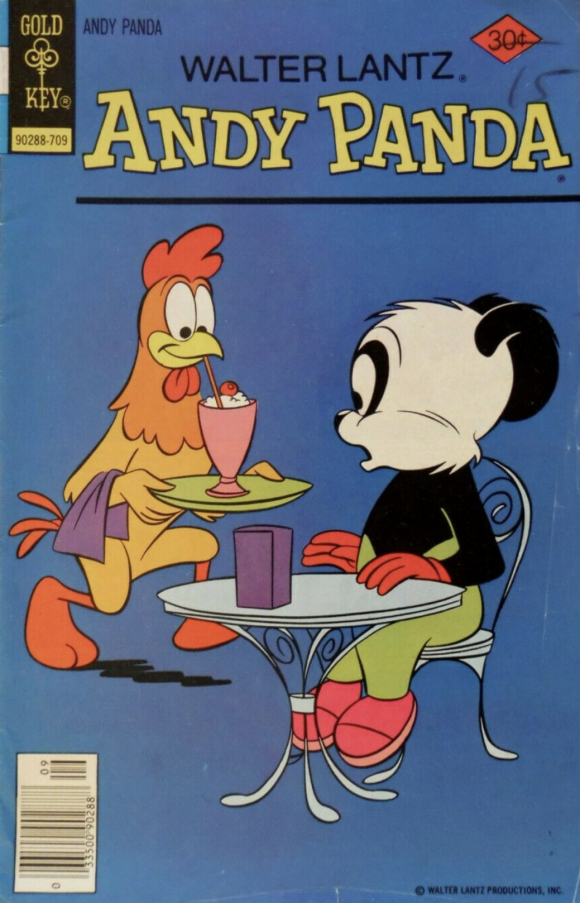 World’s Finest Comics #247, DC. Well, that’s something you don’t see every day. I doubt Superman doing the Nazi salute would make it to a cover in today’s market. Dan adds: I was thinking the exact same thing.

Avengers #164, Marvel. The Lethal Legion wasn’t the best supervillain team around, but I could never pass up a Whirlwind appearance. (Interior pencils by John Byrne, natch.) 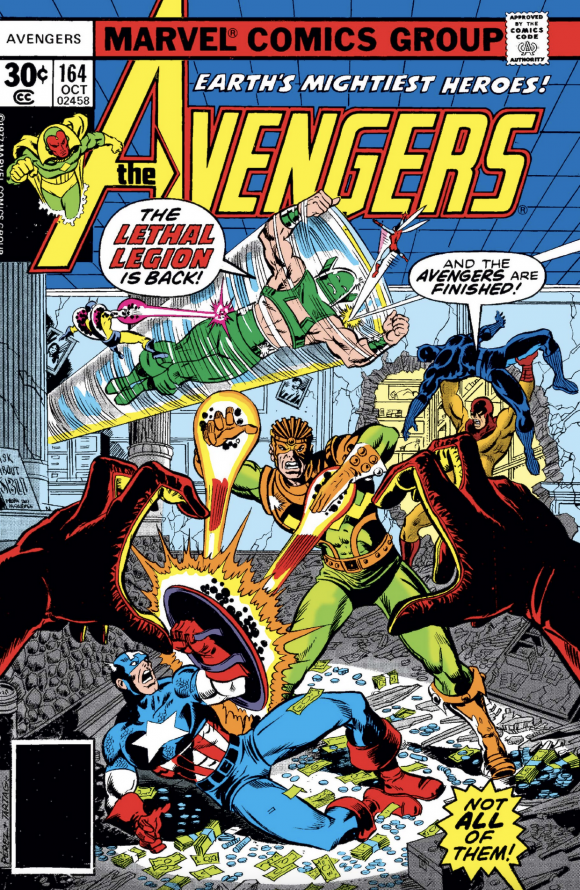 Marvel Tales #84, Marvel. Any time Marvel Tales reprinted mid-’60s to mid-’70s Spidey stories was a good time. Even though I’m not a big Spider Slayer guy, this is Stan Lee, Gil Kane and Frank Giacoia — which means it’s awesome by definition. 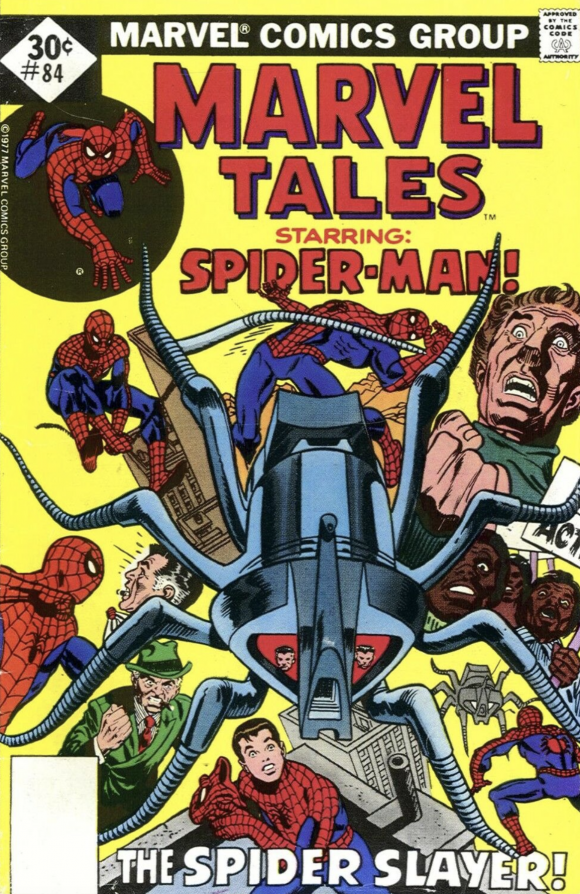 Showcase #95, DC. Paul Kupperberg represent! The longtime comics writer (and 13th Dimension columnist) frequently cites his Doom Patrol work among his favorites. And who could argue? 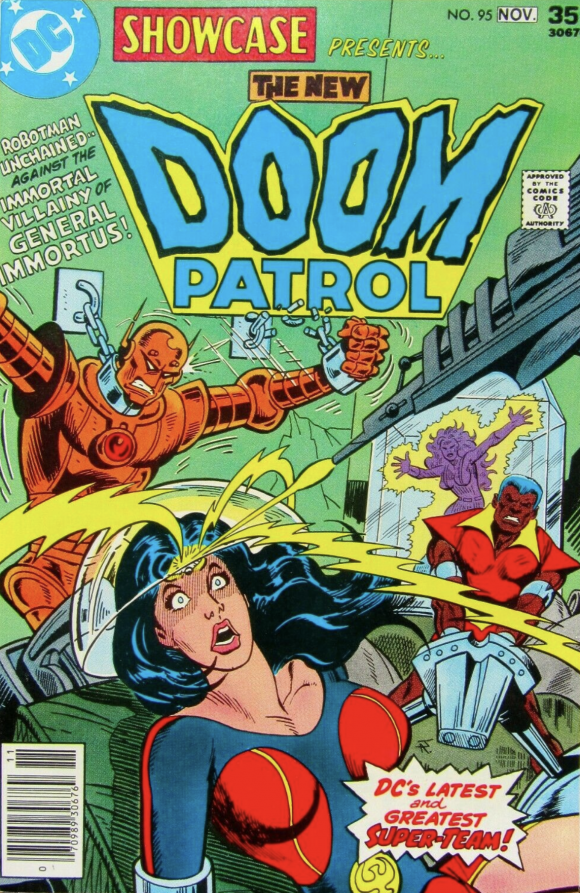 The Brave and the Bold #137, DC. You’d think that as a Batman kid, I would have grabbed every issue of B&B that I could. Not the case: It was more often based on the guest star and if they fit Batman’s world. You could argue either way about the Demon, but I remember passing on this until later when I went ahead and collected the whole Batman B&B run because completism overtook me. I have plans for an epic B&B re-read because I really want to look at this series with fresh eyes.