Why BATMAN FAMILY #1 is a Surprising Landmark in Comics History

It’s writer Elliot S! Maggin’s birthday – and we take a look at one of the most significant Bat-issues ever…

As they say in boxing, Batman Family was, pound for pound, the most entertaining Batbook of the ’70s. Batman and Detective obviously each had sustained highs that gave us some of the greatest comics ever, but there were also stretches where it seemed the Darknight Detective had lost his way.

Batman Family, on the other hand, was consistently entertaining through all its 20 issues and was, in a very substantial way, the catalyst for a seismic change in Bat-mythology – beginning with the very first issue in 1975: the budding romance between Dick Grayson and Barbara Gordon. 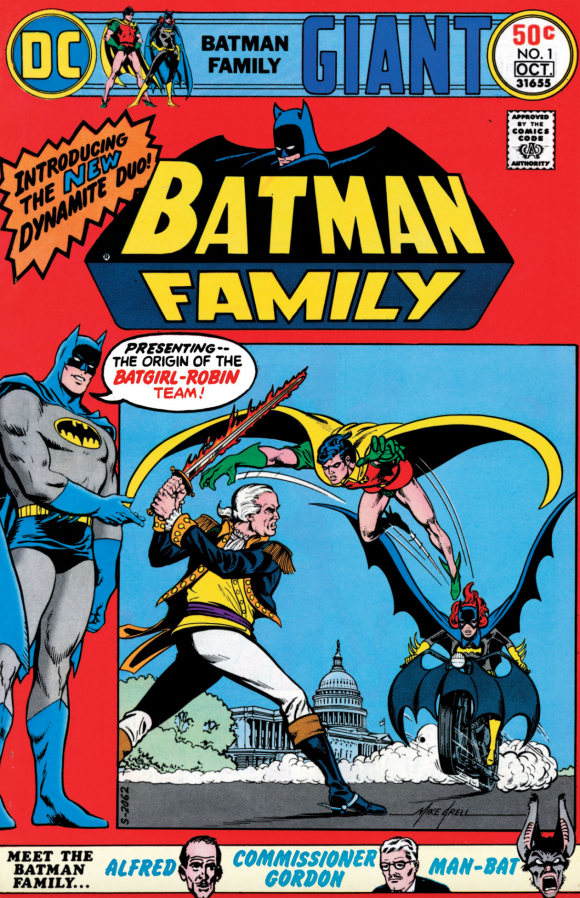 The Invader From Hell!, by Elliot S! Maggin – who turned 72 today – and Mike Grell, gives us the first real Batgirl-Robin team-up, a pairing dubbed right on the cover as the Dynamite Duo. (The two had teamed up before but this was to be a regular thing.)

The story is as uncomplicated as it is entertaining: A man claiming to be Benedict Arnold, reincarnated with magical powers, and his friend Mr. Scratch, a dapper man in a red suit, put Batgirl and Robin through their paces only to find that with the Bicentennial coming, America’s commitment to freedom and justice is as strong as ever.

Arnold is disposed of by Mr. Scratch, who, of course is the Devil in disguise. 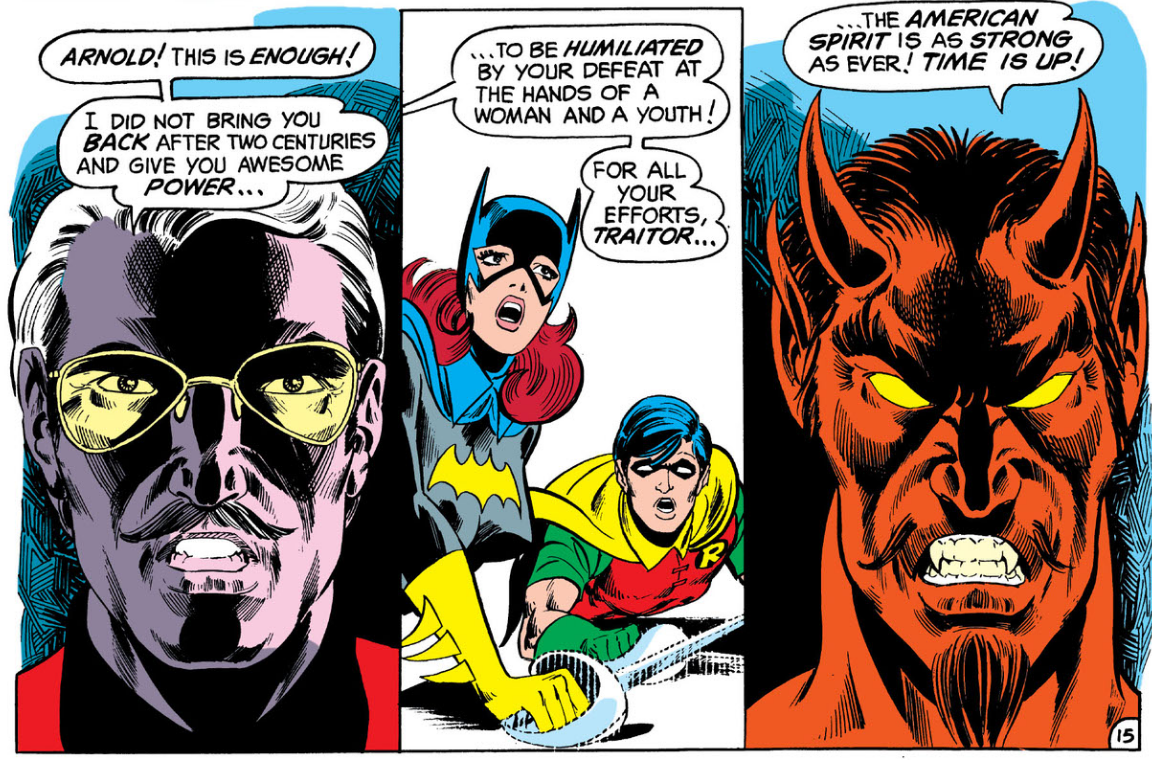 It’s all rather corny but it’s a tremendous amount of fun — Grell’s tight art really enhances the experience — and right off the, ahem, bat, the Dynamite Duo convey an easy chemistry.

The big moment, though, is at the end, when Robin tries to mansplain — complete with a peck on the cheek — the dangers of crimefighting to Batgirl, who is about 8-10 years older and a congresswoman when not wearing her gray-black tights.

Batgirl’s solution to shutting up the college-age Robin? She dips him and plants a big one right on the kisser. It totally throws Dick off his game and he sheepishly swings off. 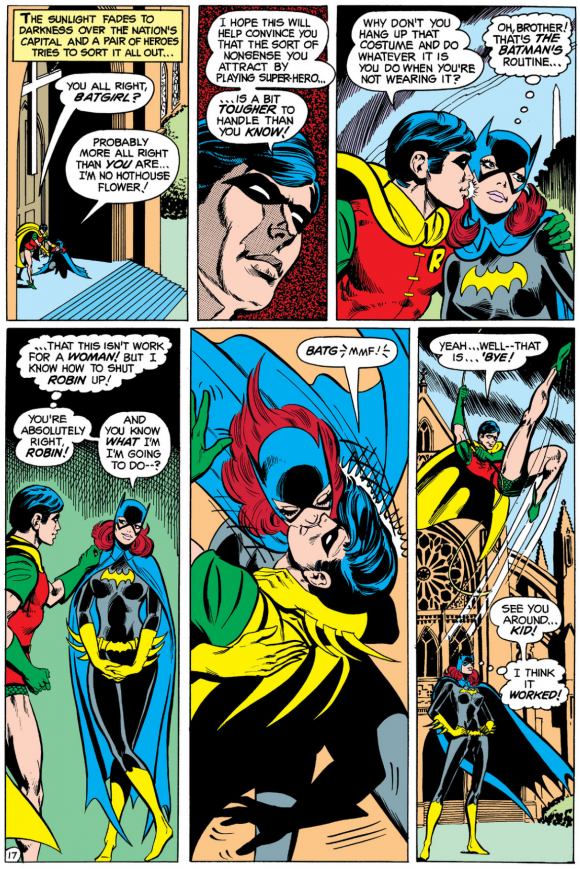 Now, of course, it’s completely gratuitous. There are about 1,001 ways Batgirl could have shut him up without resorting to her pronounced sex appeal. But the times were the times and the result was that the scene sent pulses racing among adolescent and pre-adolescent readers.

It’s clear that Barbara’s move wasn’t meant to be romantic but that didn’t seem to matter to fans, as a “will-they-or-won’t-they” debate developed in the letter columns that followed through the series. And in the stories, there was a definite tension but it was mitigated by the fact that Dick was about 18 or 19 and Barbara was probably about 27 or 28. 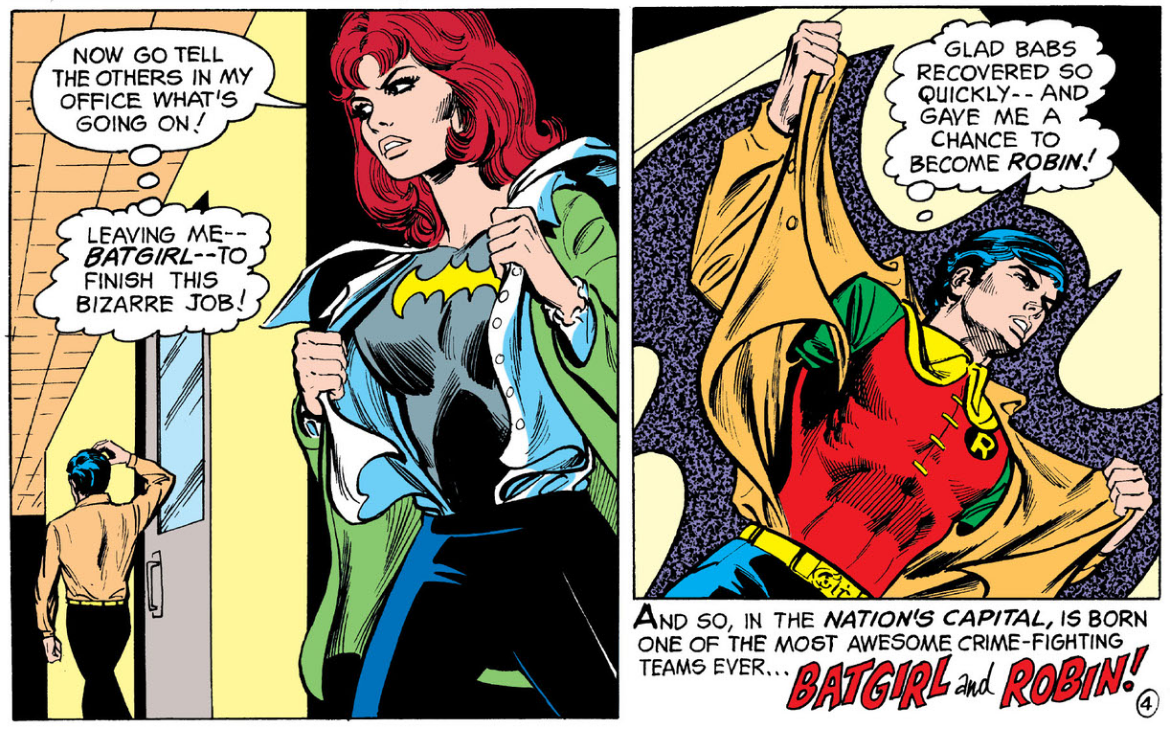 Nevertheless, a spark was lit – and it would never go out. Decades and many retcons later, Barbara has been de-aged to be Dick’s contemporary and the two of them are one of the most celebrated couples of star-crossed lovers in all of comics.

But it all started, fairly innocently enough, with that one bold kiss.

By the way, Batman Family is a favorite topic of mine and a few years back, I posted a run of interviews with series writer Bob Rozakis about the title – including the Barbara-Dick relationship.