Scott and Dan — along with guest Fred Van Lente — hit up the comics racks from 53 years ago!

This week for RETRO HOT PICKS, Scott Tipton and I are joined by 13th Dimension columnist Fred Van Lente — writer of the superb miniseries The Comic Book History of Animation from IDW — in selecting comics that came out the week of Jan. 27, 1968. 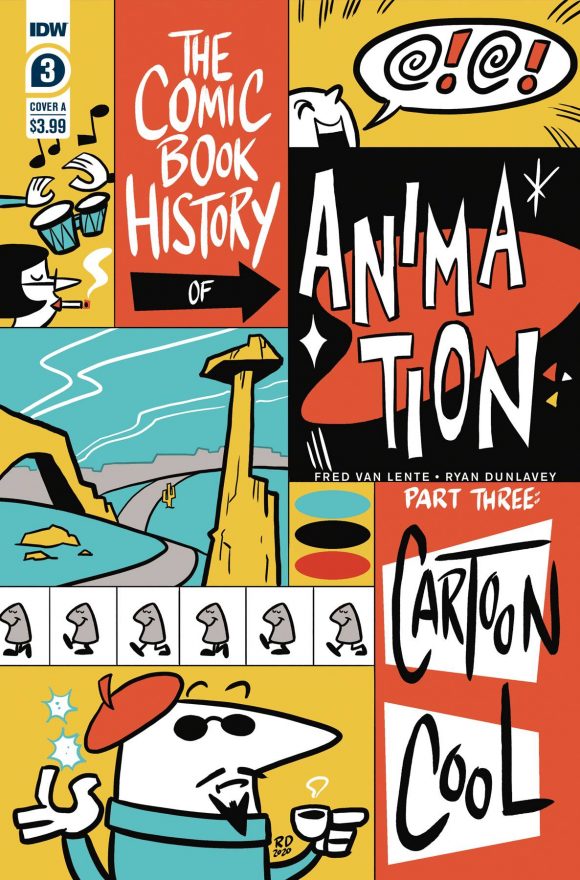 Now, this time out, we’re bending the rules some. The month of January 1968 was a pretty amazing one for comics, as you’ll see. Thing is, not many of those issues came out the last week of the month. So for the heck of it, we’re taking into account the whole month because the comics that came out earlier were still on sale the week of Jan. 27.

Got it? Good. Next week, we’ll return to our regular weekly picks. 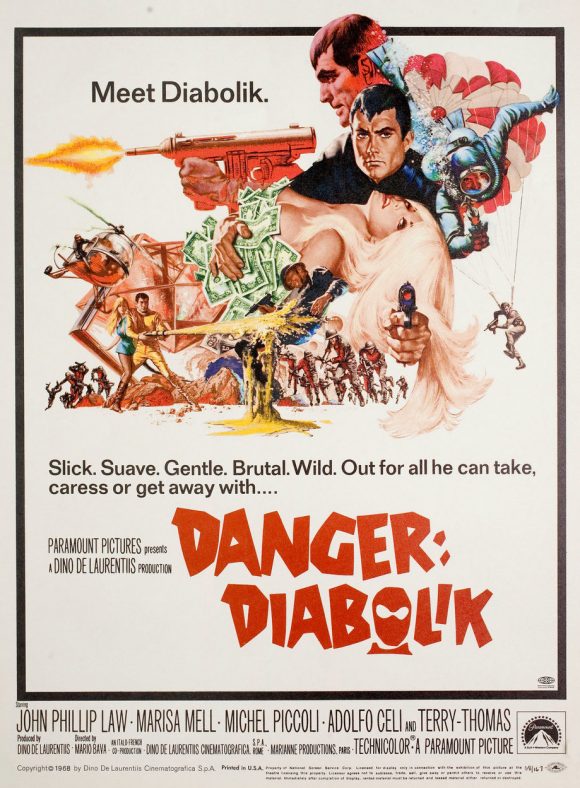 So let’s set the scene: The Vietnam War was raging as President Lyndon Johnson headed into his re-election year. The Tet Offensive began at the end of January and by the time it was over late in February, American public support for the war had cratered. Between the war, domestic turmoil and a fractured Democratic Party, Johnson announced March 31 that he would not seek re-election. On a lighter note, it was a tepid week for movies, but the cult classic Danger: Diabolik, starring John Phillip Law, debuted. (Click here for Rob Kelly’s groovy REEL RETRO CINEMA column.) 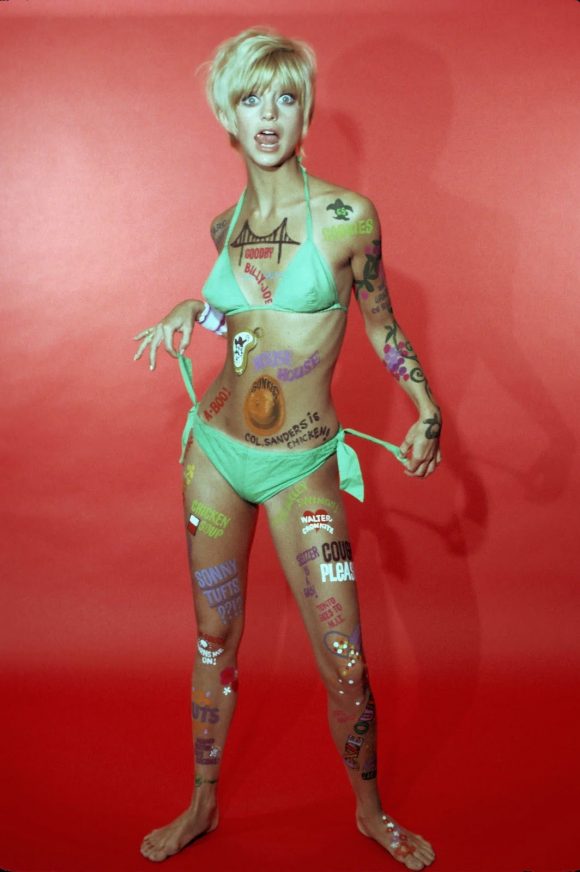 Rowan & Martin’s Laugh-In debuted Jan. 22 — replacing The Man From UNCLE on the NBC schedule — and quickly became a huge hit. Judy in Disguise (With Glasses) by John Fred and the Playboys was the No. 1 record. (The spectacularly superior Chain of Fools by Aretha Franklin was second.) Top album? Magical Mystery Tour by the Beatles, which bested the Rolling Stones’ awkward and misguided foray into psychedelia, Their Satanic Majesties Request. (Don’t worry, the Stones would right the ship by year’s end.) Oh, and Sgt. Pepper’s Lonely Heart’s Club Band — which came out in June 1967 — was still in the Top 10, at No. 6.

Captain America #100, Iron Man and Sub-Mariner #1, Hulk #102, Marvel. January 1968 is — stop me if you’ve heard this one before — the first month of 1968! That means it is the end of Marvel’s decade-long distribution deal with DC (signed when Marvel mostly went by Atlas), which severely limited the number of titles the House of Superman’s far tinier competitor could distribute. That’s why the early entries to the Marvel Universe got solo titles, while many of the mid-entry solo heroes (and the Hulk, who crapped out after six issues) were stuck sharing anthology titles Tales to Astonish and Tales of Suspense and the like. So Cap and Hulk both have solo titles debuting here, continuing the number of the anthologies. The B-features in each split-book, Sub-Mariner and Iron Man, have to share their own one-shot comic this month until each gets their own title. So I’m snagging all three of these just for historical significance alone. 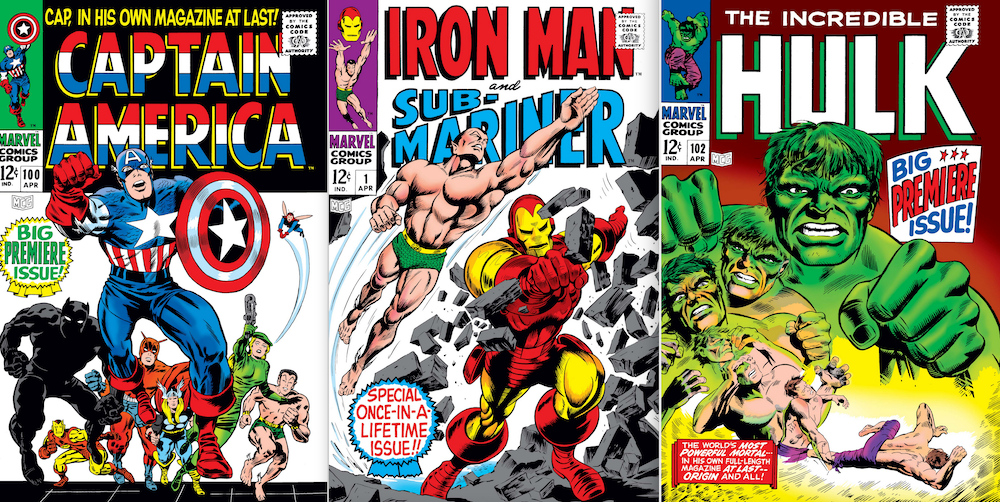 Bugs Bunny #116, Gold Key. If you don’t mind me shilling my own comic, Gold Key had quite the range of cartoon licenses, including inheriting Walt Disney’s Comics & Stories from Dell (also originators of Turok, Son of Stone) as well as a lot of your Hanna-Barbera favorites (see below). The next issue of Comic Book History of Comics, “Cartoon Cool,” talks about how the postwar Looney Tunes shop inherited the artistic daring of the late, great UPA to produce what have widely been regarded at some of the greatest cartoons ever made, like What’s Opera, Doc and Duck Amuck, the personal favorite of my collaborator the great Ryan Dunlavey. Sadly, by this point (1968), the Looney Tunes unit at Warner Brothers had been defunct for several years, cartoon shorts having been moved from the theaters onto TV. 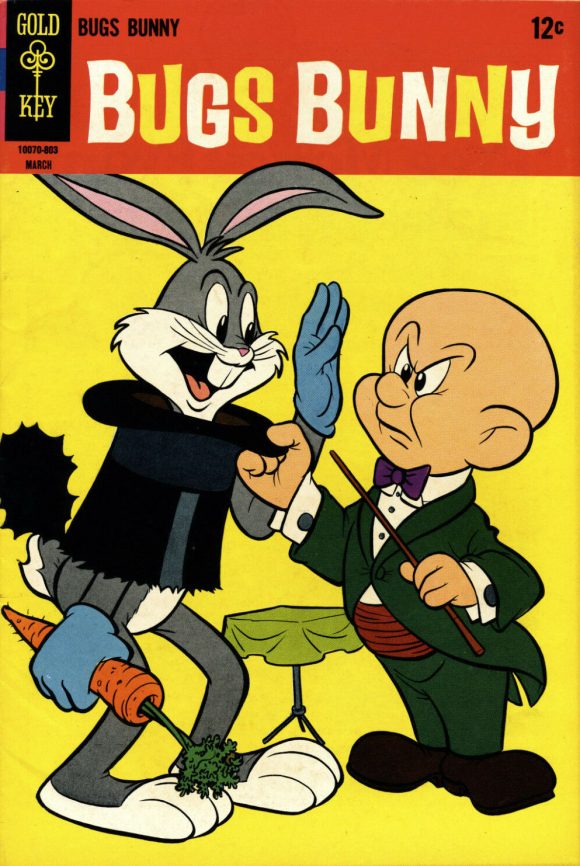 Huckleberry Hound #33 and Hanna-Barbera TV Heroes #1, Gold Key. MGM, like Warner Brothers, shut down their cartoon unit as well, forcing the guys in charge of it, Joe Barbera and William Hanna, to go into business for themselves. They soon became the top producers of cartoons in the country (this story actually gets told in March in Comic Book History of Animation #4). In 1966, Hanna-Barbera got some serious competition when upstart Filmation partnered with DC and debuted The New Adventures of Superman, the biggest ratings hit on Saturday morning. Superheroes would completely dominate cartoons from 1966 to 1968, including some unfortunate entries shown here — the only real standout was The Herculoids, which according to Joe Barbera’s autobiography had an even better rating than its sci-fi cousin Space Ghost. 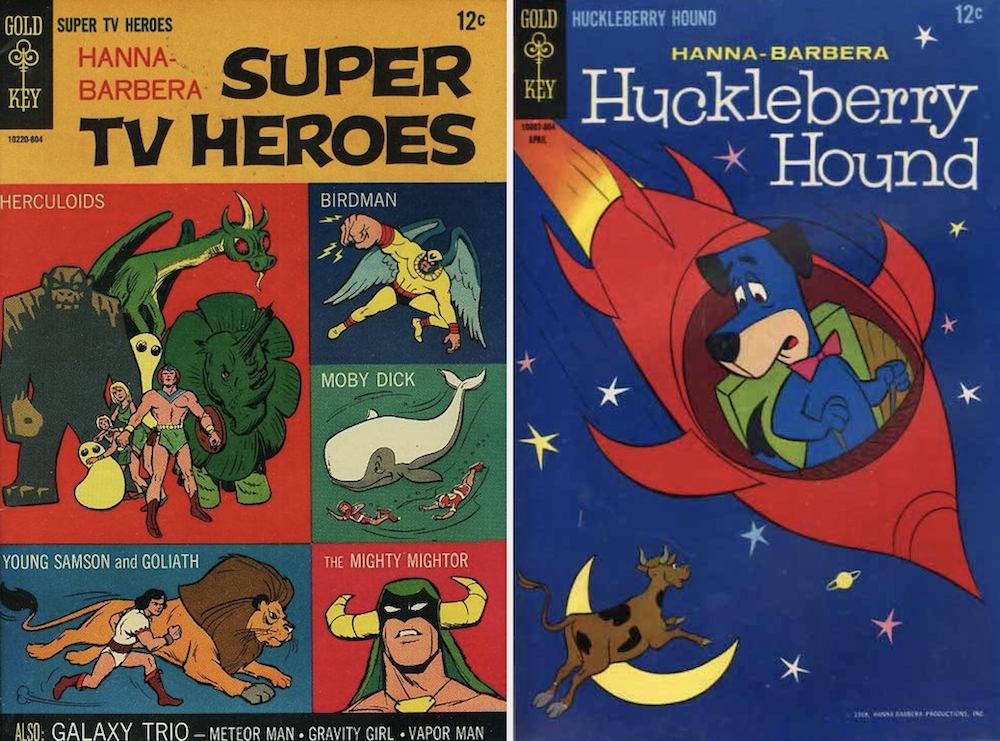 Dan adds: I’m a big fan of Space Ghost and Birdman myself. More so than The Herculoids. So there.

Strange Tales #167, Marvel. Jim Steranko’s run on Nick Fury still stands as the highlight of the character’s history, and this has got to be the best cover. 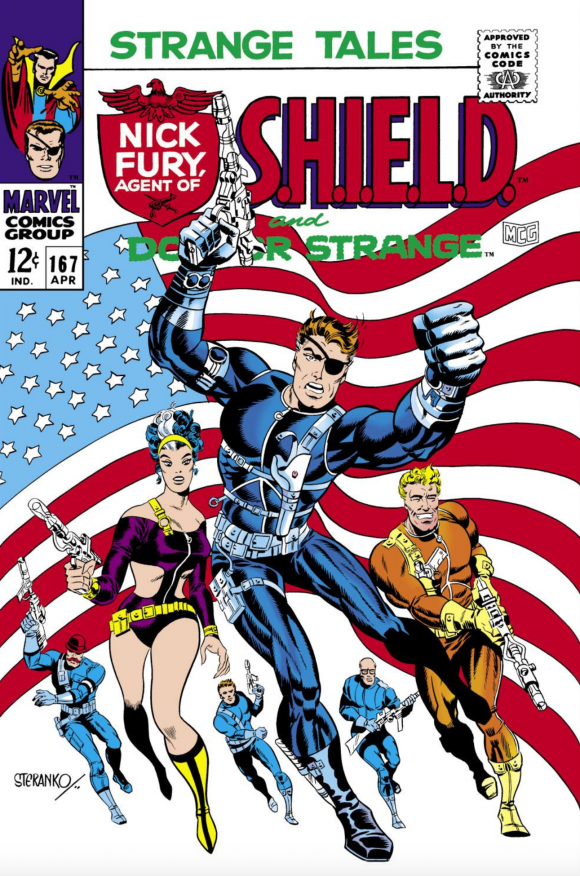 X-Men #42, Marvel. SPOILER ALERT: As it turned out, this was not for real. 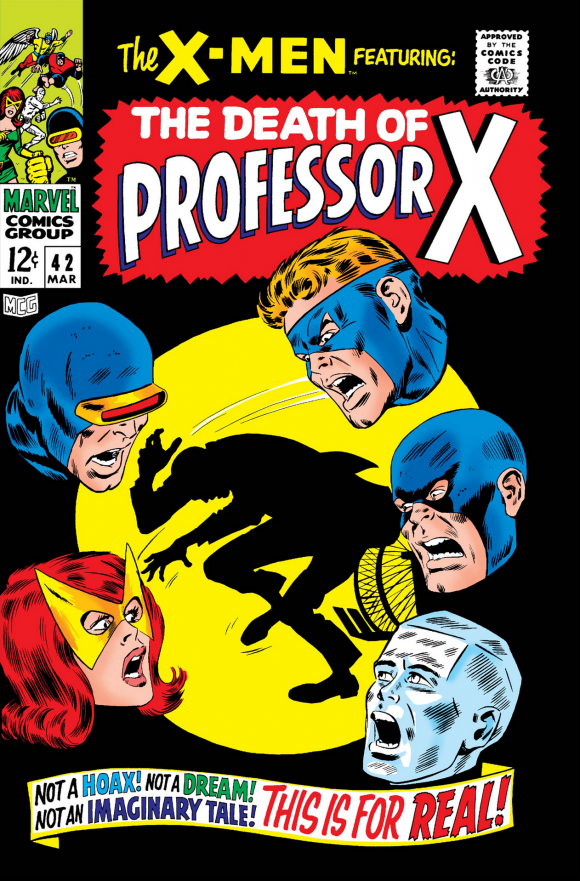 Flash #177, DC. The Silver Age Flash run was legendary for putting Barry Allen through outrageous bodily changes and distortions. Like, for example, a really big head. 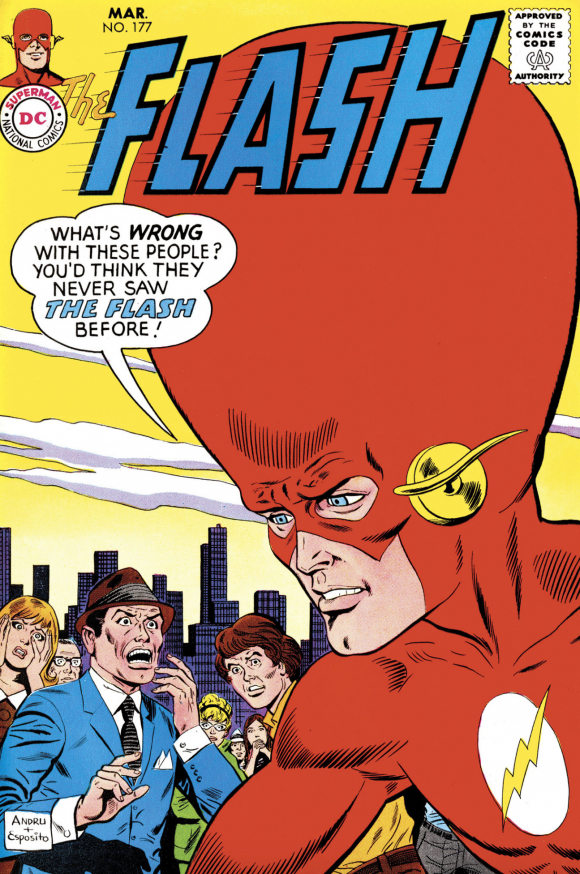 Batman #200, DC. OK, so it’s the Caped Crusader’s smash 200th issue — and guess who DC hired to write it? 18-year-old Mike Friedrich. 18. YEARS. OLD. But the kid didn’t squander the opportunity. The main villain is the Scarecrow, who really hadn’t been used much in the Silver Age, but evildoers like the Joker and the Penguin also show up. Plus, it recaps the origins of Batman and Robin. All in all, a nice job by the 18-YEAR-OLD. Scott adds: I could never resist a mosaic cover. This one by Neal Adams is a beauty.

Teen Titans #14, DC. This classic made our TOP 13 ROBIN STORIES (click here) and our TOP 13 TEEN TITANS COVERS (click here). The Gargoyle tries to get Robin to quit, in really creepy, unsettling fashion. Bob Haney wrote it and it’s one of the best jobs by artist Nick Cardy I’ve ever seen — from the cover inward. Scott adds: Artist Nick Cardy had an incredibly good series of Titans covers around this time. Here’s my favorite.

Detective Comics #373, DC. Hey, it’s the first appearance of Mr. Freeze in the comics! Sort of! He’d been introduced as Mr. Zero about a decade before, quickly went dormant, then was revived with the new name by the 1966 Batman TV show. So this is the first time the name was used in comic books. To this day, I still wish there was a green-suited Mego Mr. Freeze. At least he was included in this wonderful toy. 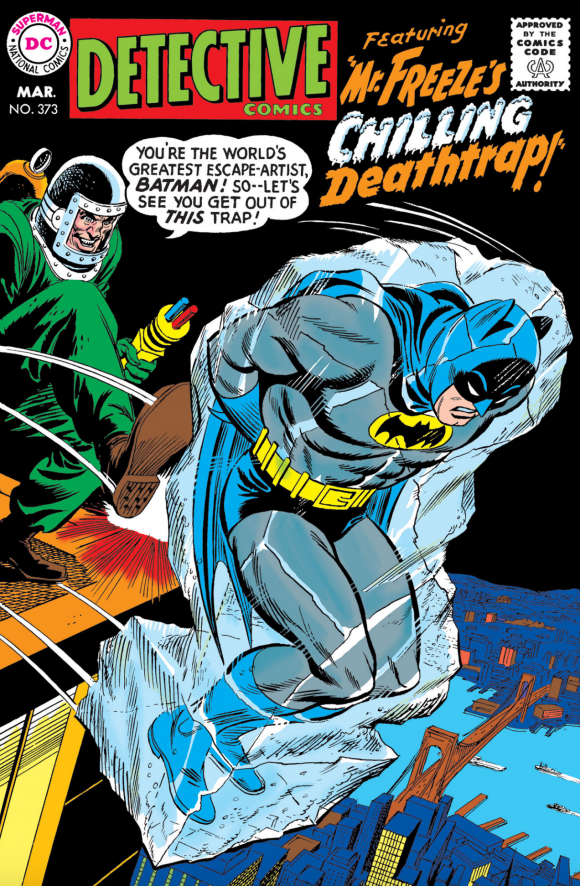 Showcase #73, DC. Hey, look! It’s the first appearance of the Creeper! Steve Ditko’s creation (with a hand from Don Segall) was never destined for A-Listdom but I love it whenever he shows up — and he doesn’t show up nearly enough. 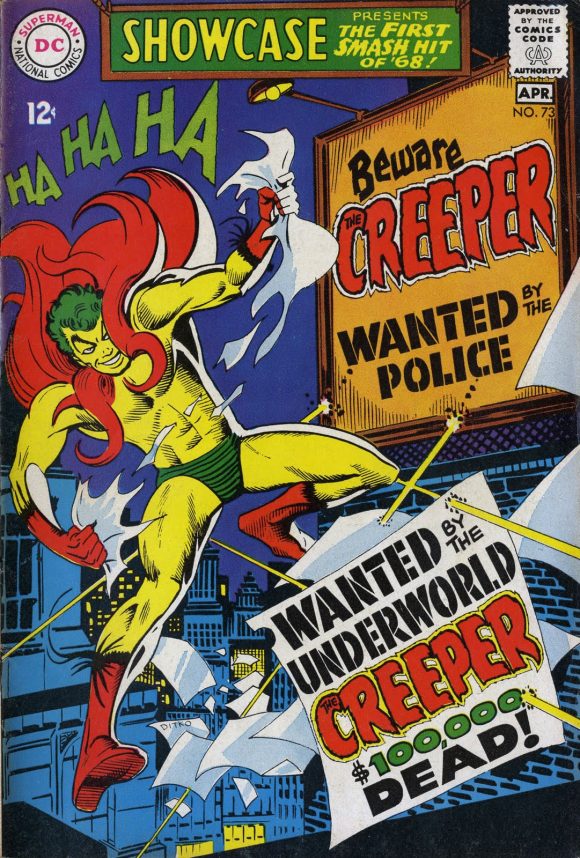 Justice League of America #61, DC. Easily one of the most memorable JLA covers ever, I first read this story when it was reprinted in the 1975 Super Friends treasury (LCE #C-41). It’s a wonderfully convoluted tale by Gardner Fox, Mike Sekowsky and Sid Greene in which Green Arrow mysteriously quits the JLA and the others each decide to dress up as the Emerald Archer to find out why. Then they individually encounter some of their biggest adversaries — and their bodies are switched, with Batman-as-Green Arrow and the Penguin trading places, and so forth. I could go on, but you get the point, right? Green Lantern #59, DC. Hey, look! It’s the first appearance of Guy Gardner! He was more or less forgotten after this until he was remade in the 1980s and the Guy Gardner we all know and loathe. Strange Adventures #210, DC. The thick of Neal Adams’ storied run on Deadman, though at this point the feature was still written by Jack Miller. Some of the most inspired art in comics history. 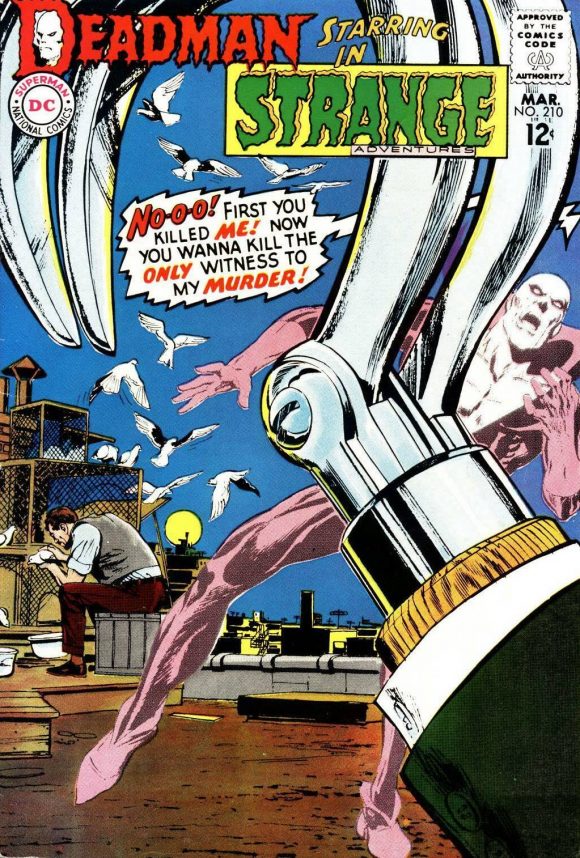 Not Brand Ecch #7, Marvel. It just tickles me to no end that the House of Ideas was as likely to lampoon the Distinguished Competition as much as themselves. I think I need to track down that trade collection from a couple years ago. The Amazing Spider-Man #59, Marvel. If you pick up just about any Spidey comic from 1962 to, oh, about 1975, you’ll have a great time. Don Heck helped out John Romita this issue, but that’s one of Jazzy John’s most popular covers. Fantastic Four #73, Marvel. Shared Universe Alert: The FF are joined by Daredevil, Spider-Man and Thor! (The issue ties to Daredevil #38 and Thor #149.) House of Mystery #173, DC. One of the best-known Dial H for Hero covers — I remember it so well from the house ads. How Warner Brothers hasn’t made a show out of the Dial H concept yet, I don’t know. The Spectre #3, DC. I’m picking this up for 13th Dimension columnist Paul Kupperberg, who listed it among his 13 FAVORITE 1960s DC MULTIVERSE STORIES. (Click here.) Oh, and this is Mike Friedrich’s first published story. And he was paired with Neal Adams! The Boy Wonder was on a roll!