Scott and Dan — along with guest Glenn Greenberg — hit up the comics racks from 39 years ago!

This week for RETRO HOT PICKS, Scott Tipton and I are joined by historian, journalist and genre writer Glenn Greenberg in selecting comics that came out the week of Jan. 20, 1982.

Glenn’s latest project is a “bookazine” bio of John Lennon, published by Bauer Media. (Click here to get your hands on a copy.) 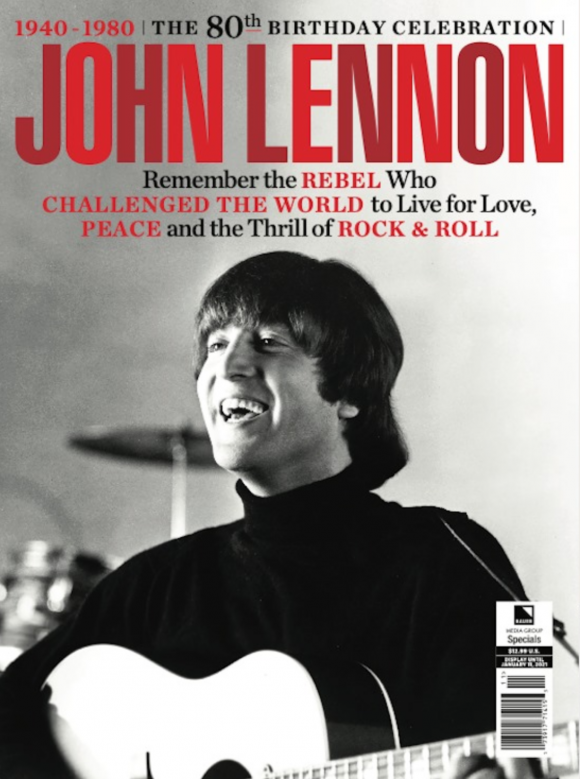 (Keep in mind that comics came out on multiple days back then — as has become the case now. So these are technically the comics that went on sale between Jan. 17 and Jan. 23.) 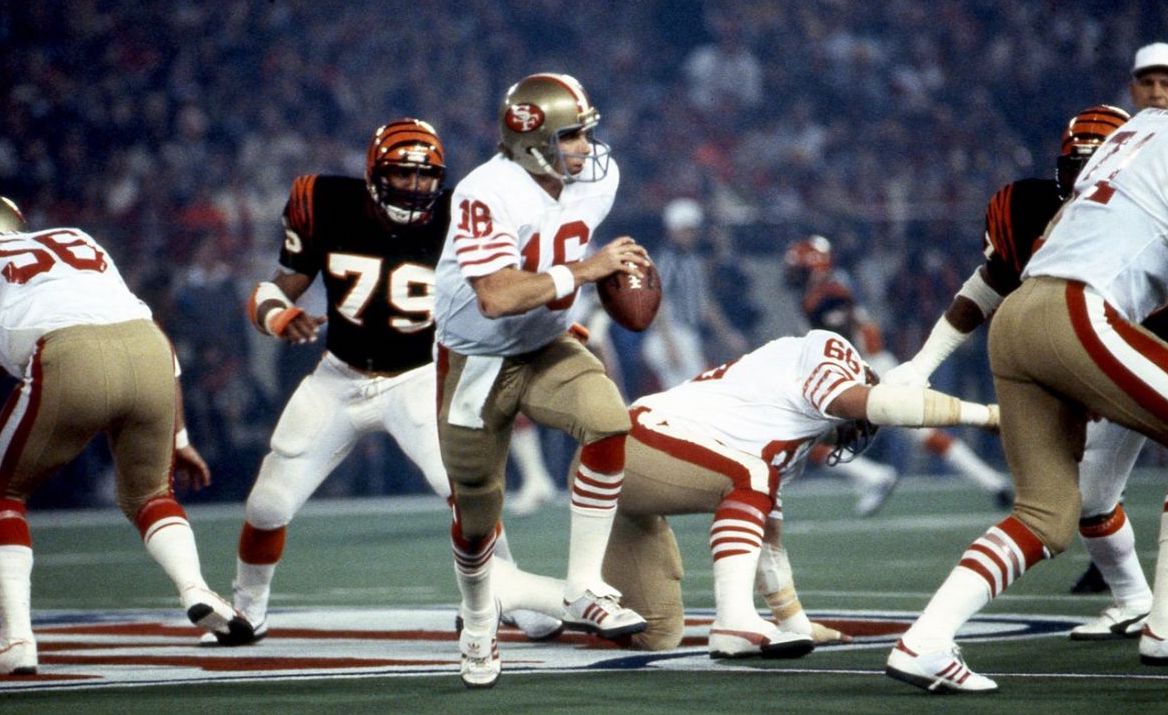 So let’s set the scene: Ronald Reagan was starting the second year of his first term. The Paul Newman-Sally Field journalism drama Absence of Malice, released the month before, was tops at the box office. The top show on TV wasn’t a TV show — it was Super Bowl XVI, in which the San Francisco 49ers defeated the Cincinnati Bengals, 26-21, launching Niners QB Joe Montana to superstardom. The easily and often ridiculed Physical by Olivia Newton-John was the best-selling single, while Foreigner’s 4 unfortunately was the No. 1 album. (But at least AC/DC’s For Those About to Rock (We Salute You) and the Stones’ Tattoo You were high on the charts.

We’re all just waiting on a friend…

Looking back, 1982 was a great year for comics. My two all-time favorite characters, Batman and the Hulk, were in great shape during that time, enthralling me each and every month. Gerry Conway was writing both Batman and Detective Comics, working primarily with artists Gene Colan and Don Newton, and they were simply on fire, producing a run that, in my opinion, rivals the classic and definitive series of stories by Steve Englehart and Marshall Rogers from several years earlier. And over on The Incredible Hulk, writer Bill Mantlo and artist Sal Buscema were at the peak of their long collaboration. 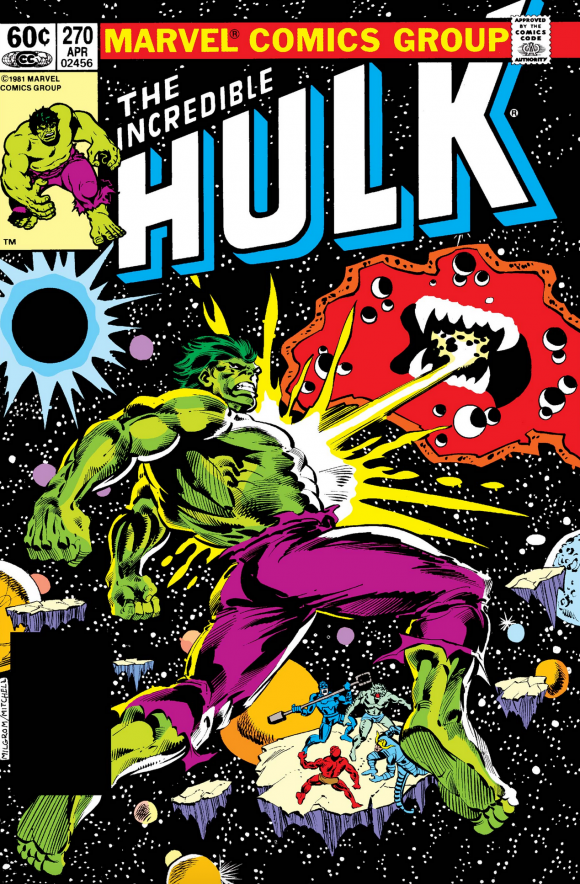 But those two books weren’t the only highlights. Looking at what came out the week of Jan. 20, 1982, I’m reminded of the other titles I was following that were consistently delivering top-quality stories that left me wanting more when I got to the last page:

Peter Parker, the Spectacular Spider-Man #65, Marvel. Under editor Tom DeFalco, both this title and The Amazing Spider-Man were undergoing a creative renaissance. Roger Stern and John Romita Jr. were picking up speed on Amazing, laying the groundwork for what would become one of the most acclaimed Spider-Man runs of all time. 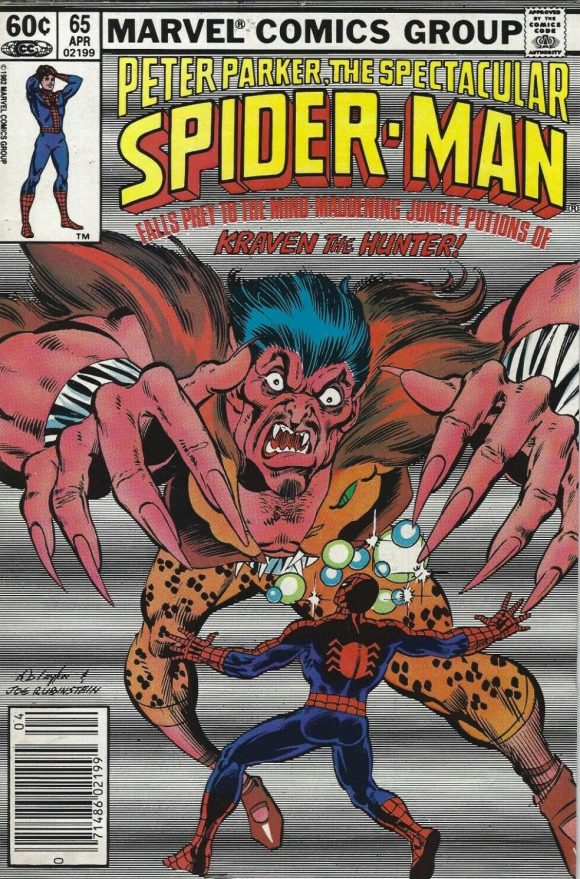 On Spectacular, writer Bill Mantlo had usually been in a position where he toiled away on what had always been considered the “B-title,” without access to most of Spider-Man’s classic villains, never able to do anything of real consequence with the title character, and therefore finding his stories to be considered, for the most part, non-essential. But DeFalco went to great lengths to make both Spider-Man books feel like they mattered. And in #65, Mantlo, paired with artists Bob Hall and Jim Mooney, got the chance to bring back Kraven the Hunter.

Accompanied by his voodoo priestess companion, Calypso, Kraven launched yet another attempt at defeating the wall-crawler and restoring his so-called honor. It’s no Kraven’s Last Hunt, but it’s a solid, done-in-one, good old-fashioned yarn that digs into the villain’s psyche and provides solid groundwork for that later, pivotal saga that brought Kraven’s story to a permanent end (well, for a while, at least). And it certainly didn’t hurt having a striking cover by Bob Layton and Joe Rubinstein.

Star Wars #58, Marvel. For Star Wars fans of a certain age, the original Marvel comic-book series was pretty much all there was to sate the appetite for more adventures of the beloved characters in between installments of the original movie trilogy. And this issue came right in the midst of a true creative high point for the series. In following the events of The Empire Strikes Back, writer David Michelinie, co-plotter/penciller Walt Simonson and inker Tom Palmer could not resolve any of that film’s dangling plotlines — Han Solo couldn’t be rescued and freed of the carbonite and Luke Skywalker couldn’t come face to face with Darth Vader again. So the comic-book crew had to rely on their own creativity and originality to keep the momentum going while, essentially, running in place. And they pulled it off wonderfully. 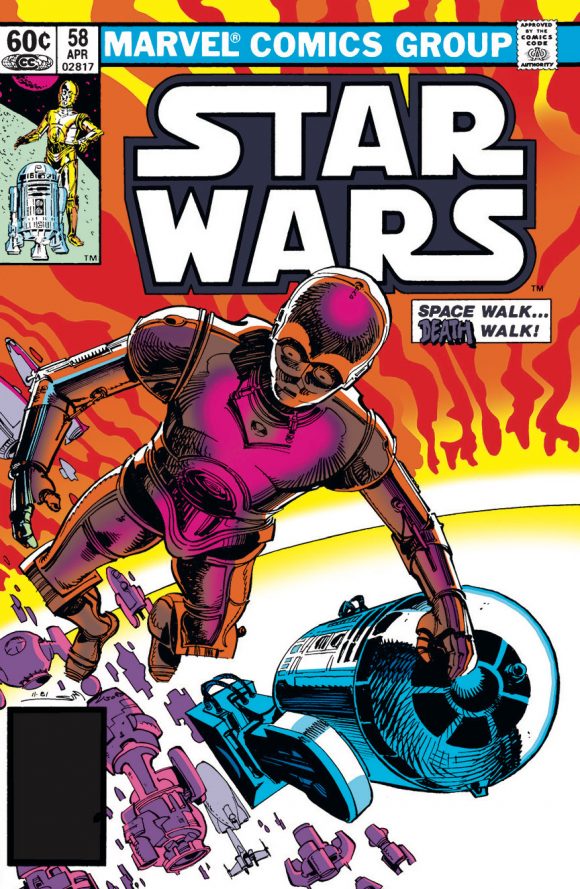 In this issue, the rebels, having moved their base of operations to the forest world of Arbra, launch a daring plan to hide their fleet from the Empire by moving all the ships into the planet’s sun, protected by a sophisticated shield system. But the plan goes awry, the fleet is put in jeopardy, and it’s up to C-3PO and R2-D2 to save the day. A perfect mix of action, humor and characterization.

The Phantom Zone #4, DC. Steve Gerber and Gene Colan on Superman? Yep, this happened, sort of. Not in Superman or Action Comics, but in one of the early mini-series produced by DC. The Phantom Zone told a four-part story about Charlie Kweskill, an employee at the Daily Planet who is actually a de-powered Kryptonian named Quex-Ul with no memory of his true identity — or the fact that he’s a former inmate of the interdimensional prison that houses Krypton’s most dangerous criminals. Kweskill is manipulated into building a device that frees General Zod and a slew of other Phantom Zone prisoners — and he ends up trapped in the Zone again himself, along with Superman.

As the series concludes with this issue, Gerber explores the very nature of the Phantom Zone, revealing what it really is, the scope of it, and what it’s like to be trapped inside of it. This is as trippy and as mind-bending a tale as you would expect from the team that brought you Howard the Duck, with Tony DeZuniga ably assisting on inks. Definitely not a run-of-the-mill Superman-related story, it’s one you’ll probably have to reread to fully grasp, and it’s certainly one of the darker ones of that era. Scott adds: This was a weird series. I think it was one of Steve Gerber’s few DC writing jobs, and his very Marvel-esque voice was an odd fit here, especially on as staid a concept as Superman’s Phantom Zone interdimensional prison.

What If #32, Marvel. This was Marvel editor and continuity cop Mark Gruenwald at his best, writing and drawing a gigantic epic that brought in all the largest and weirdest of Marvel’s cosmic characters for a universe-melting saga. Of note: This issue has around 28 inkers, most of whom only ink a single character. 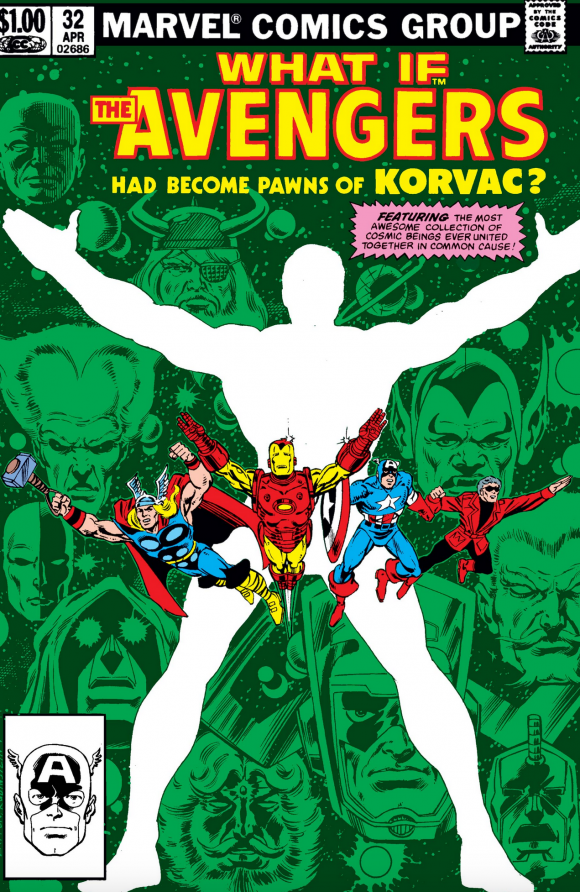 Superman Family #217, DC. Believe it or not, that’s not Metallo Superman is fighting on the cover here; it’s Metalo. One “L.” Unlike the Kryptonite-hearted cyborg, one-“L” Metalo is just a dude in a metal suit, but he first fought Superman all the way back in 1942. 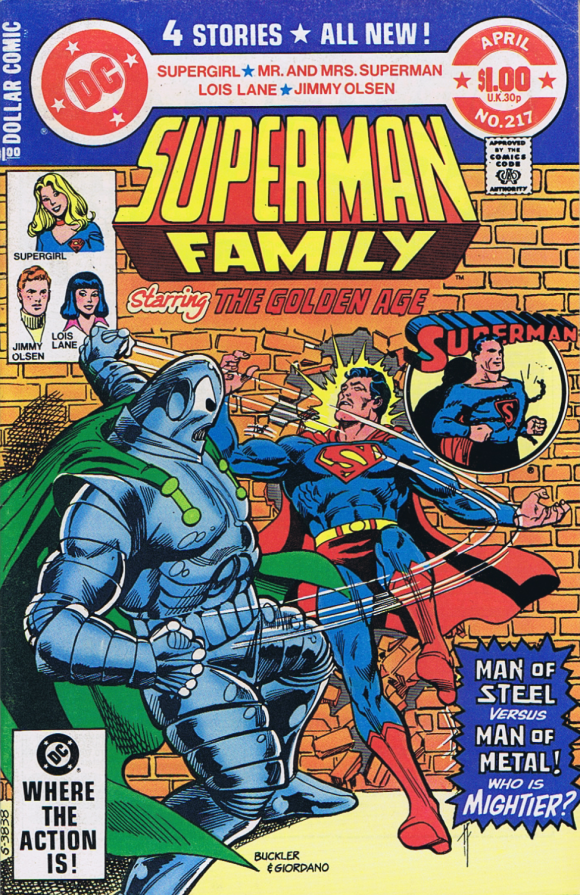 The Brave and the Bold #185, DC. Batman once again teamed up with B&B buddy Green Arrow, this time with Robin and the Penguin in on the action. I pretty much was buying anything Batman at the time, even if this was kind of a strange period for The Brave and the Bold: There were a lot of cool team-ups as the title ran down its final stretch but it was no longer home to Bob Haney’s entertaining antics. The great Jim Aparo was still around — though not for this issue. The creative team this time? Writer Don Kraar, penciller Adrian Gonzales and inker Mike DeCarlo. Neat cover by Rich Buckler and Dick Giordano. 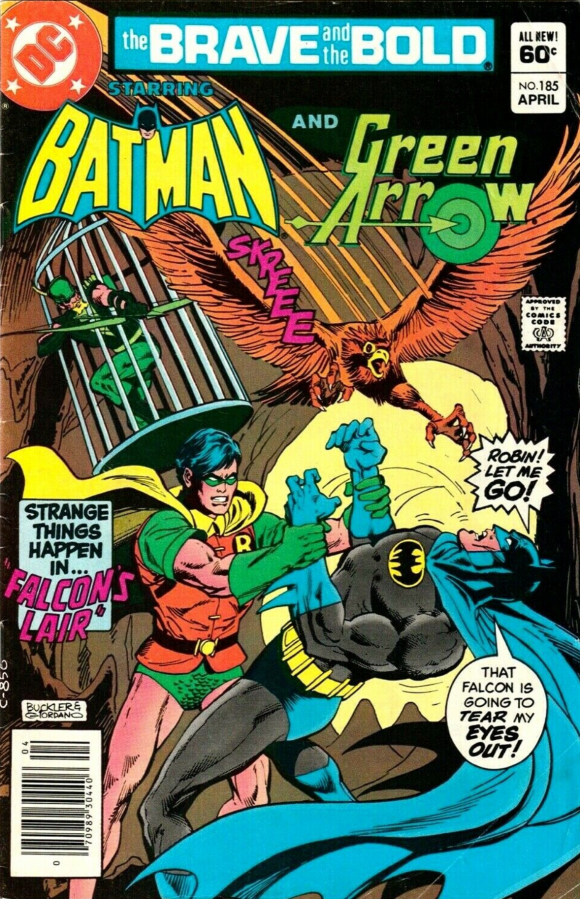