Just in time for the Fourth of July, it’s 1776, the 1972 film adaptation of the hit musical about the political struggle of the Continental Congress to declare independence!

1776 follows the travails of John Adams (William Daniels, better to known to geeks as the voice of KITT on Knight Rider), Benjamin Franklin (Howard Da Silva) and Thomas Jefferson (Ken Howard, The White Shadow) as they squabble with the other leaders of the original 13 colonies as to whether to declare their independence from England, while Gen. George Washington is off fighting them on the battlefield. Their main opposition is Pennsylvania’s John Dickinson (Donald Madden), who still hopes to reconcile with England. Another major problem is the sin of slavery, which a number of the Founding Fathers refuse to give up, despite all the talk of men who deserve to be free. 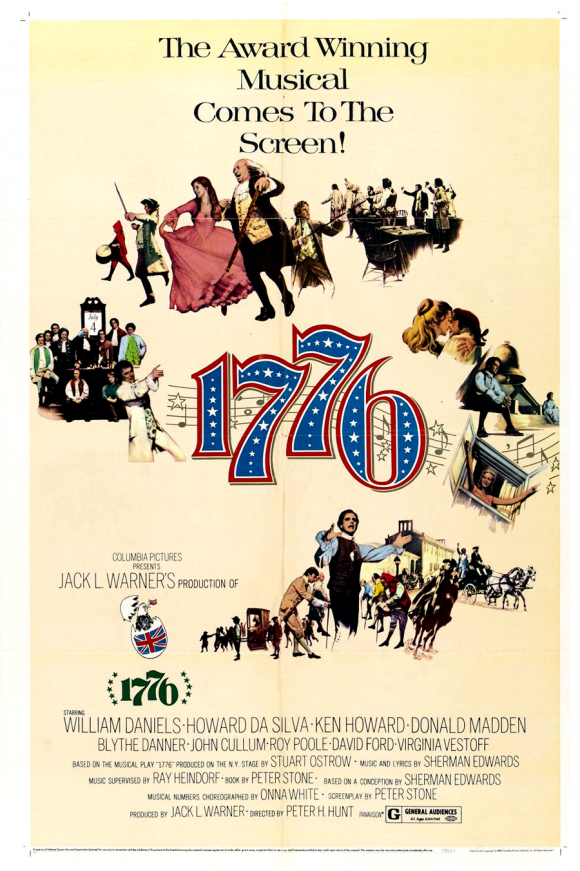 1776 the musical was launched on Broadway in 1969. It seems ironic that such a patriotic, decidedly “square” story of Great Americans was launched at a time when the country seemed to be tearing itself apart—Nixon was president, assassinations were rampant, and we were mired in Vietnam. Maybe it was done as a reaction to all that bad news, and worked as an escape for a certain section of America, because it was a massive hit.

Just a few years later it was turned into a film, the final one produced by legendary movie studio bigwig Jack L. Warner. Warner was an immigrant to the United States, and saw this film as a way of “paying back” all that the country had done for him. So, despite what was going on in the world, there is no snark or irony to be found in 1776; this is about as straightforward as you can get, the kind of musical Captain America would probably enjoy.

In the world of 1776, John Adams is intensely disliked. He is so determined to push the issue of independence on his colleagues that people practically roll their eyes when he starts talking. He has a friend in Benjamin Franklin, whose avuncular disposition and good humor makes him more popular, and he has a beloved, devoted wife in Abigail (who is seen in slightly surrealistic dream sequences, reminding one of Ben Kenobi talking to Luke after he got struck down by Vader). She encourages John to keep trying, so when Franklin suggests the notion of independence be brought up by someone other than Adams, they enlist Richard Henry Lee of Virginia (Ron Holgate), leading to one of the film’s bigger musical numbers (set around a giant fountain, which resided on the Warners lot and would later gain fame due to its use in the opening credits to Friends).

The debate continues, and eventually John Hancock calls for unanimity in the decision, suggesting that any colony that is anti-independence might be tempted to fight for England if push came to shove. This is agreed to, making Adams’ and the others’ job even harder. Eventually a declaration is needed, and Thomas Jefferson is brought in because of his popularity and superior writing skills. Unfortunately, Jefferson is lonely and depressed, having been away from his wife for a long time. Adams and Franklin, realizing the best way to solve their problem, is to send for comely Martha Jefferson (Blythe Danner). She shows up, and before long Jefferson’s writer’s block is, ahem, “cured.”

The fight eventually boils down to an amendment that abolishes slavery. The Southern states want it removed, but Adams refuses to budge. Franklin advises Adams to drop it, saying it’s more important to get the proverbial ball rolling and address the issue later. Adams leaves it to Jefferson, whom he trusts. Jefferson, a slave owner himself, reluctantly agrees to remove it. The final vote comes down to Judge James Wilson, from Pennsylvania. He has normally followed the lead of Dickinson, but here he rebels, saying he doesn’t want to go down in history as the man who stood in the way of independence. Finally, they all sit down to sign the document, just as the calendar reaches July 4. The final shot of the film is an extreme pull back (so extreme they apparently had to remove a wall on the set so the camera could keep going) of all these historic figures, as America is being born.

For a musical that runs almost three hours (the theatrically released version is 144 minutes, the full director’s cut that is now available adds 20 minutes), there really aren’t that many songs, with most of them front-loaded in the first half of the film. The movie was a moderate success, but the play has continued to thrive and has been put on across the country ever since.

William Daniels excelled at playing difficult, taciturn men, and he does well with that kind of role here. Howard Da Silva was a victim of the Hollywood Black List, so he must have felt some sense of vindication getting the chance to play one of the country’s Founding Fathers. Beefy Ken Howard seems like someone suited for more physical roles, but here he’s fairly contained and thoughtful, as is fitting for the role of Thomas Jefferson. 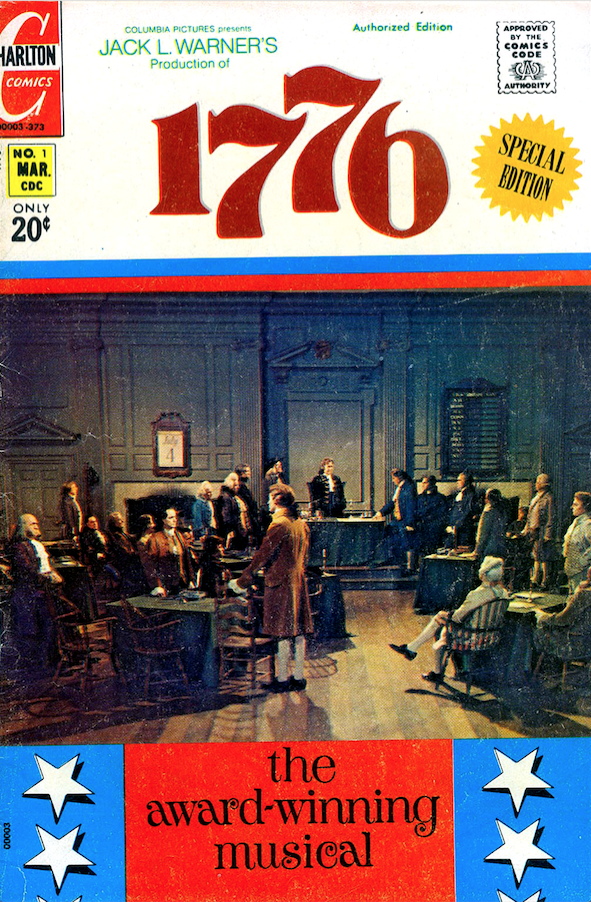 I guess Charlton Comics was feeling quite patriotic, because they decided to produce a comic-book adaptation, by company workhorses Joe Gill and Tony Tallarico. You could argue that 1776 can be a bit of a slog to get through, since it mostly consists of guys in wigs sitting around talking, enlivened by the occasional musical number. The comic book, of course, omits all of that flavor, as well as all the messy stuff about slavery. 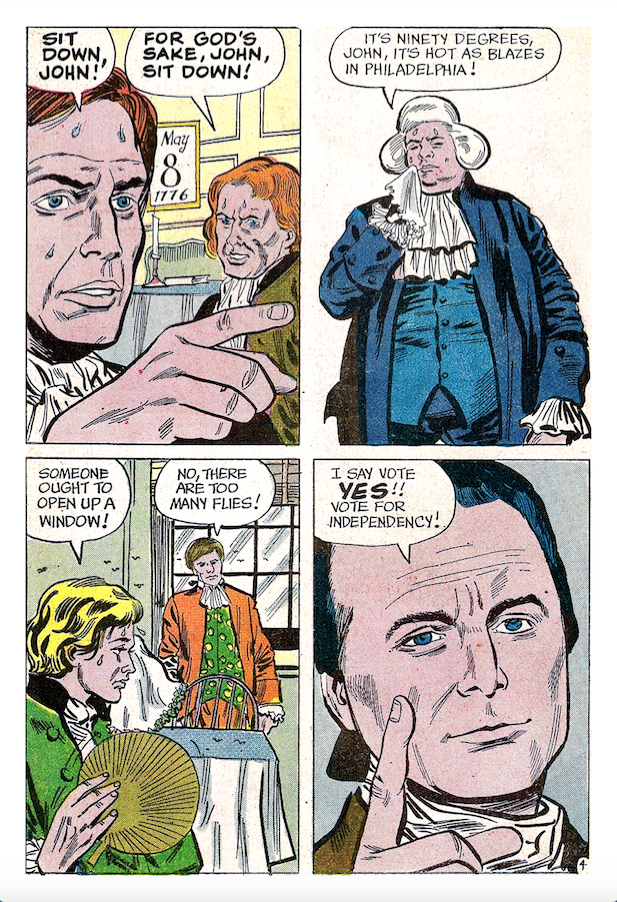 I have to admit, it’s a pretty dull affair—check out the cover, where someone at Charlton decided to use the most boring image possible (“Oh yeah, I’ll pick this up instead of the newest Where Monsters Dwell,” said no kid ever). Tallarico handles William Daniels’ likeness pretty well, but everyone else is generic. One unusual detail is that it features no ads, leading me to think they got a sweet deal from Warner Brothers (who would, of course, buy DC Comics soon after) so they could afford to release a book with cover-to-cover content. 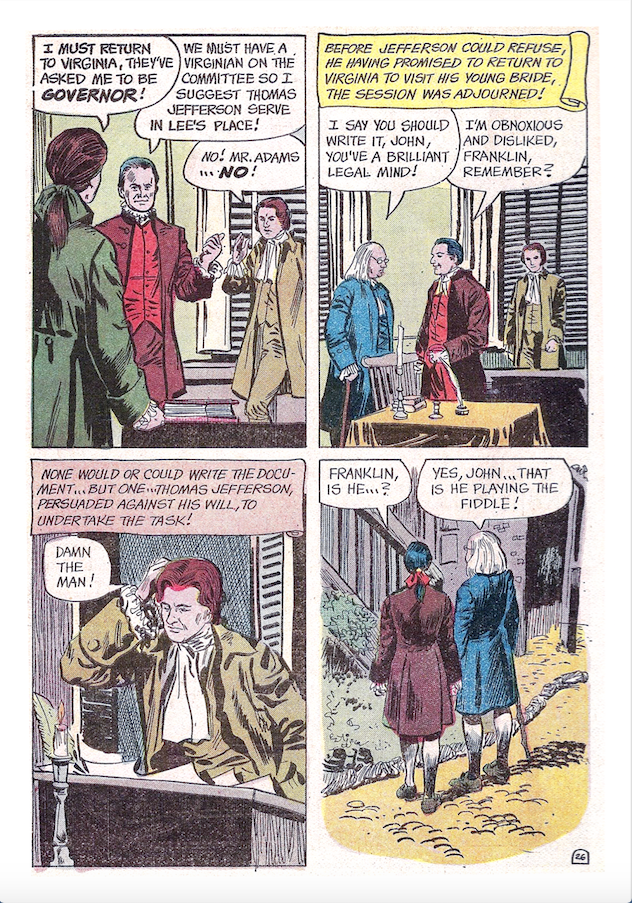 1776 is a fun family film, presenting what could be dry history in an interesting way. If you have someone in your family who is a nut for American history and hasn’t yet seen it, get them to check it out. It’s a nice reminder that, often as not, history is not pre-ordained. Sometimes it just happens at the right place at the right time. Happy Independence Day everyone!

Rob Kelly is a writer/artist/comics and film historian. He is the co-host of The Fire and Water Podcast (and the host of its sister show, The Film and Water Podcast), the co-creator and writer of the award-winning webcomic Ace Kilroy, and the creator of the book Hey Kids, Comics!: True-Life Tales From the Spinner Rack. On the whole, he’d rather be in Philadelphia.