A BIRTHDAY CELEBRATION: The celebrated Mr. K pays a comic tribute to his fave entertainer… 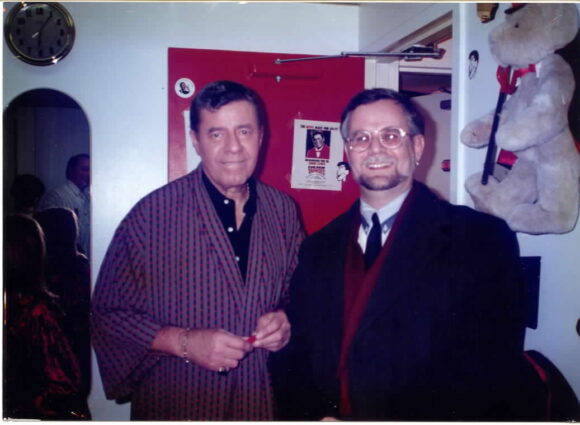 Don’t get me started on Jerry Lewis!

I was born the year Dean Martin and Jerry Lewis, the most successful comedy duo in history, broke up, and by the time I became aware of such things, their movies were showing up regularly on television and Jerry had already embarked on his successful solo film career. I was 8 years old when I saw The Nutty Professor (1963) and I was hooked for life. (And yes, I do recognize that Jerry was often on the wrong side of controversy, but the 9-year-old in me will forever love him for the comfort and laughter he brought into my often unhappy childhood.)

If you think movie merchandizing was a modern invention of Star Wars vintage, Martin and Lewis had them all beat by a quarter of a century. They appeared on countless products, including these objects in my collection: a two-face Martin and Lewis hand-puppet and a Tucks’ cellophane tape dispenser. I also own a copy of Jerry’s life-mask, made, I believe, for make-up tests for The Nutty Professor, as well as the lobby posters for The Bellhop, Cinderfella (painted by Norman Rockwell), and the Italian release of It’s Only Money. 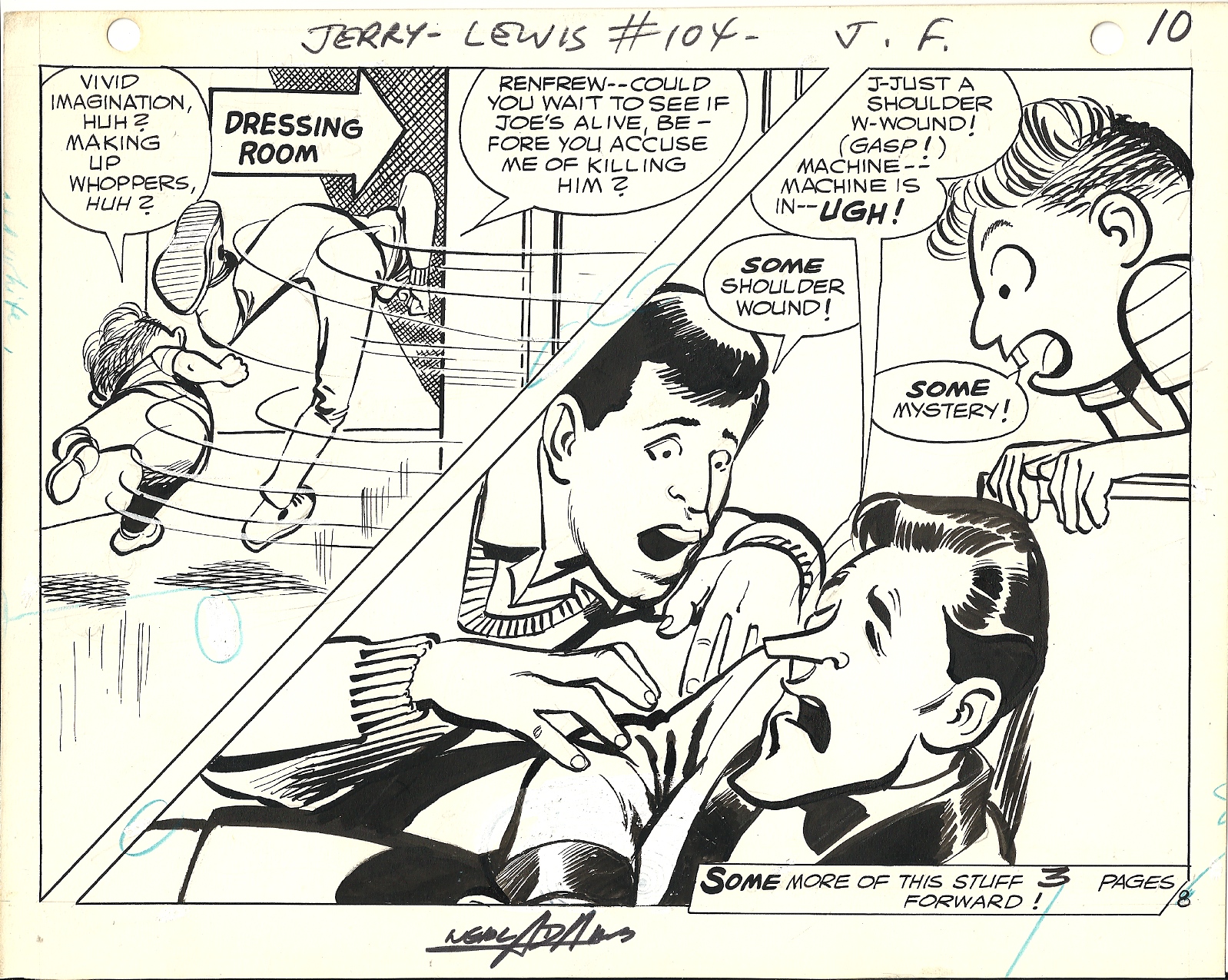 And did I mention comic books?

DC Comics’ The Adventures of Dean Martin & Jerry Lewis ran for 40 issues (July-August 1952 – October 1957), and, after their legendary split, continued as The Adventures of Jerry Lewis from #41 – 124 (November 1957 – May-June 1971. (I understand why they went with the wacky, juvenile Jerry over the womanizing, hard drinking crooner Dean to continue the title, but I sure as heck would have loved to have also seen Dino’s solo adventures! Oh, pally!)

The Adventures of Dean Martin & Jerry Lewis #1 (July-Aug. 1952). The boys made a lightning-fast leap from nightclubs to radio to movies to television; originally teaming up in 1945 they starred in their first film, My Friend Irma in 1949, and by 1950 they were hosting NBC’s Colgate Comedy Hour. Comic books starring movie stars like Alan Ladd (1949), Bob Hope (1950), and Western personalities like Hopalong Cassidy (1943) and Roy Rogers (1941) were a lot more common in those days, and Martin and Lewis were a natural fit for the medium. Each issue contained several stories (in these earliest issues, stories and covers were mostly credited to the venerable Howie Post, a DC humor writer/artist and later creator of Anthro), each story a fresh start in a new setting in which Dean and Jerry could be put through their comedic paces. 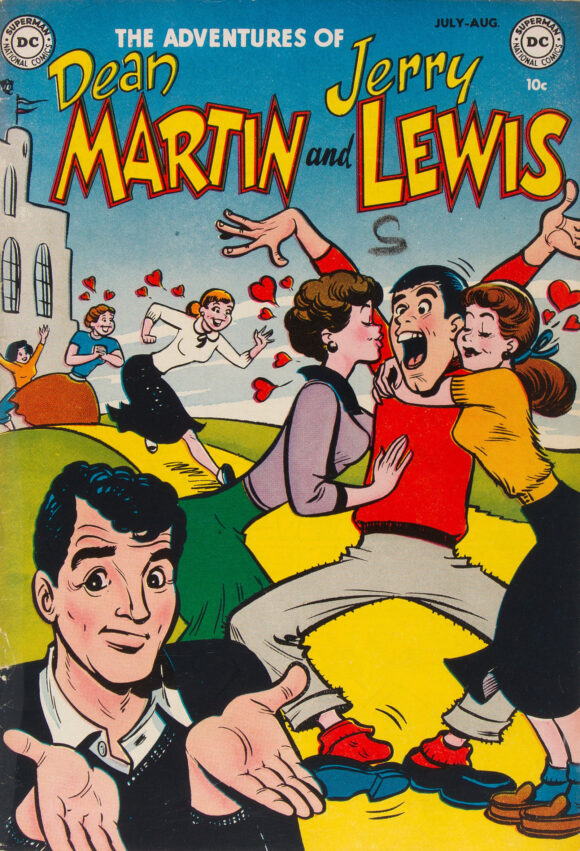 Artists and Models (Paramount Pictures, 1955). I’m stretching the definitions of “comic book appearances” to include the movie in which the Boys played wannabe comic book creators for the Bat Lady comic book. To my mind one of the best of M&L’s 16 films, Artists and Models was directed by Norman Taurog (who co-wrote the screenplay with Hal Kantor and Herbert Baker) and co-starred Shirley MacLaine, Eva Gabor, Anita Ekberg and Eddie Mayehoff. One of its most interesting story points is that it addressed the then-current controversy over the supposed harmful effects of comic book sex and violence on children that had led, just the year before, to the formation of the Comics Code Authority. 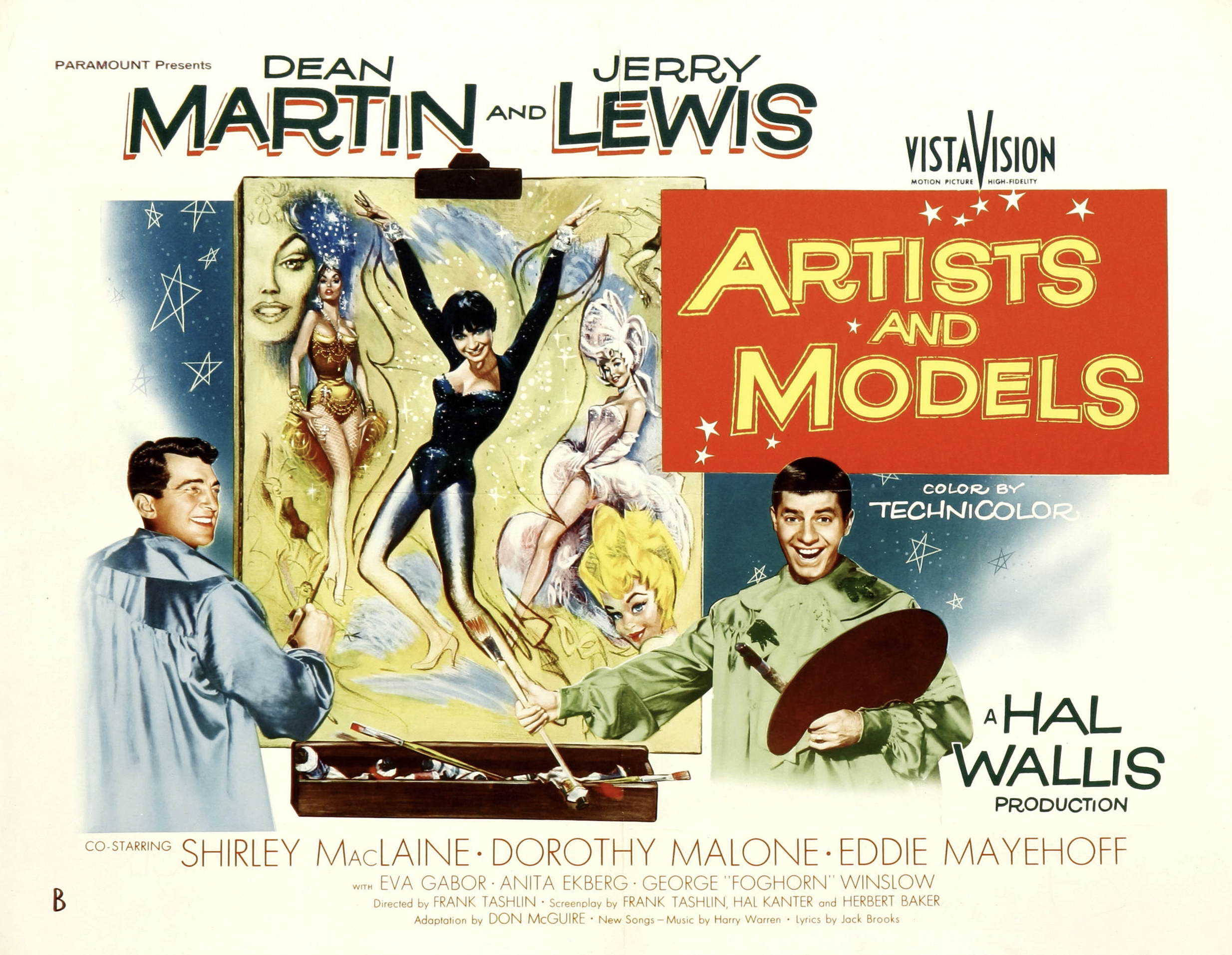 Four Color #1049: Don’t Give Up the Ship (Dell Comics, Aug.-Oct. 1959). Jerry’s fifth solo feature was director Frank Tashlin’s Don’t Give Up the Ship, a comedy that sees Jerry as an officer in search of the U.S.S. Kornblatt, the destroyer escort he’s somehow misplaced. It’s one of his early attempts at playing a more adult comedy role instead of the “Idiot” he portrayed partnered with Dean. Credited to writers Eric Freiwald and Robert Schaefer and artist Dan Spiegle, it’s a competent adaptation of a so-so film, but one of the two comics I selected from my collection to have Jerry sign when I met him backstage at a Sunday matinee of Damn Yankees, a Broadway revival in which he was starring as the Devil in 1995. 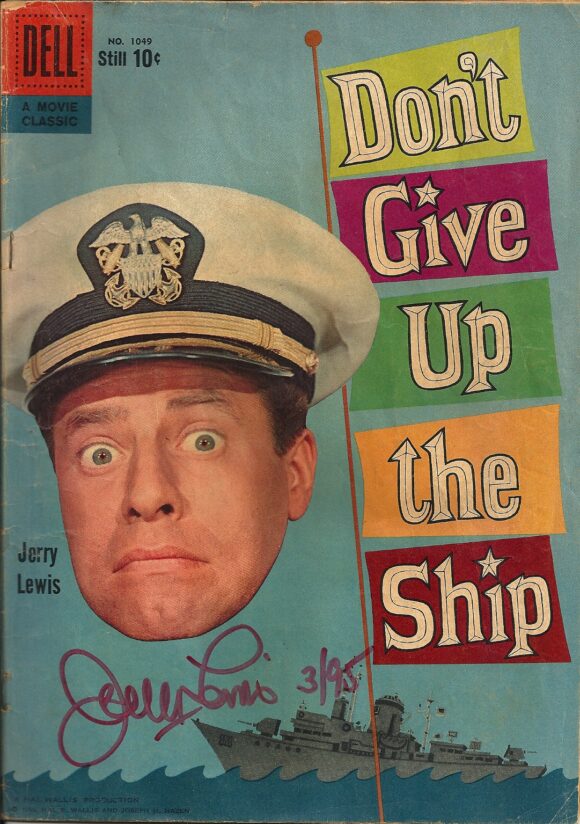 The Adventures of Jerry Lewis #68 (Jan./Feb. 1962). Here’s something you don’t see anymore, a movie adaptation as an issue of an ongoing series. I don’t recall seeing it very often even back then, but Jerry’s 1961 film, The Errand Boy (which he also directed and co-wrote with Bill Richmond) doed it (and would do it again) anyway. The adaptation of the wacky adventures of a lowly paperhanger picked by Paramutual Studios executives to spy on his fellow employees was penciled (and perhaps written by) Bob Oksner and inked by Graham Place. 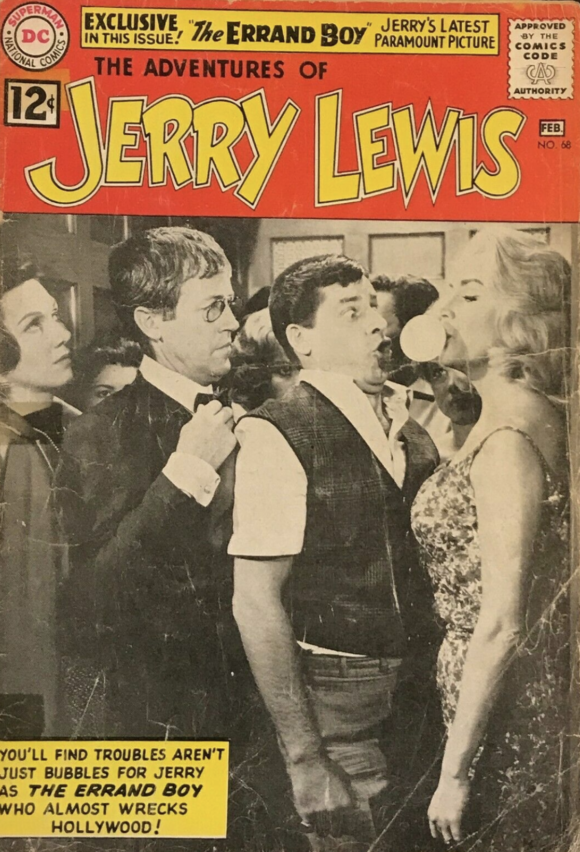 The Adventures of Jerry Lewis #74 (Jan./Feb. 1963). Another movie, another adaptation, this time of the 1962 film It’s Only Money, a favorite of mine, featuring Jerry as a bumbling TV repairman who dreams of becoming a private detective. He does, alongside P.I. Jesse White and hilarity ensues. Whoever wrote the adaptation of screenwriter John Fenton Murray and director Tashlin’s film is unknown, but the art is by Oksner. 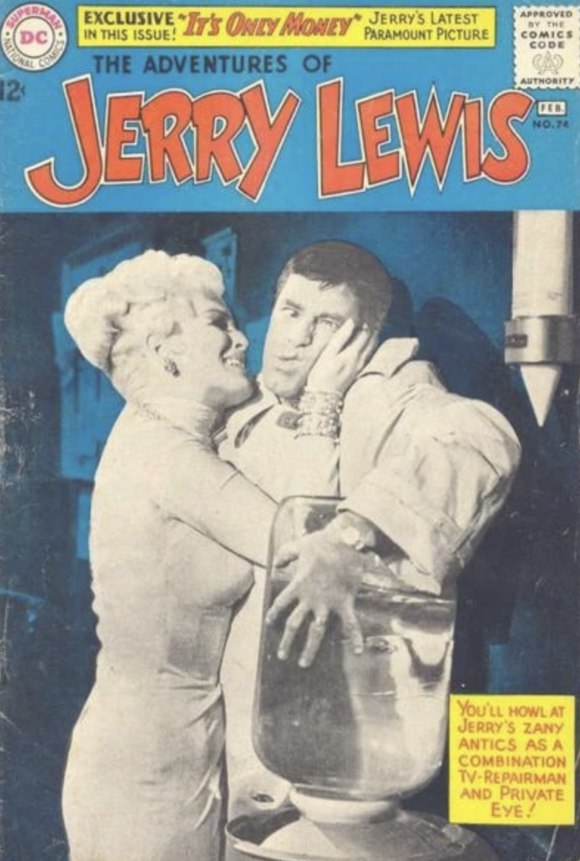 The Adventures of Jerry Lewis #83 (July/Aug. 1964). Jerry and a houseful of retired horror movie actors in a story by Arnold Drake and Bob Oksner? What, as my grandmother used to say, could be bad? 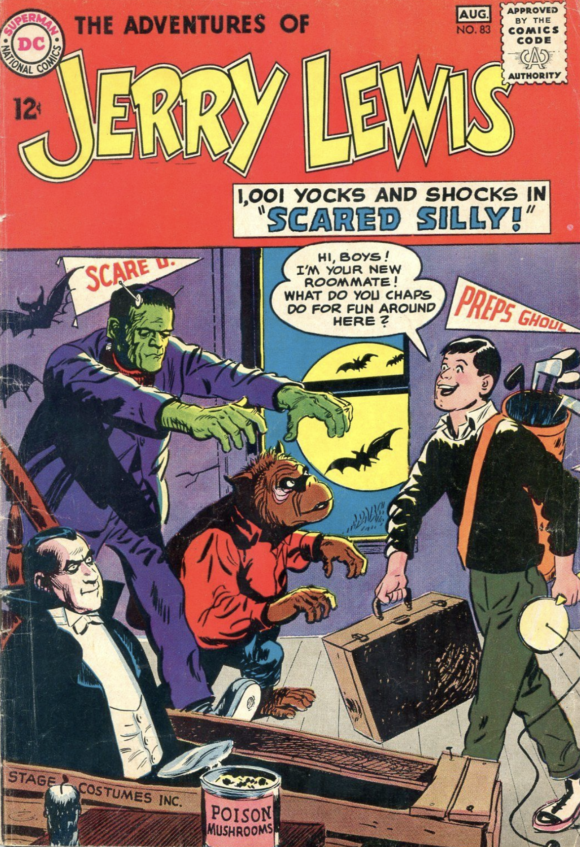 The Adventures of Jerry Lewis #85 (Nov./Dec. 1964). He was no Dean Martin, but Jerry eventually gained a new partner with the introduction of his nephew Renfrew (by Drake and Oksner). 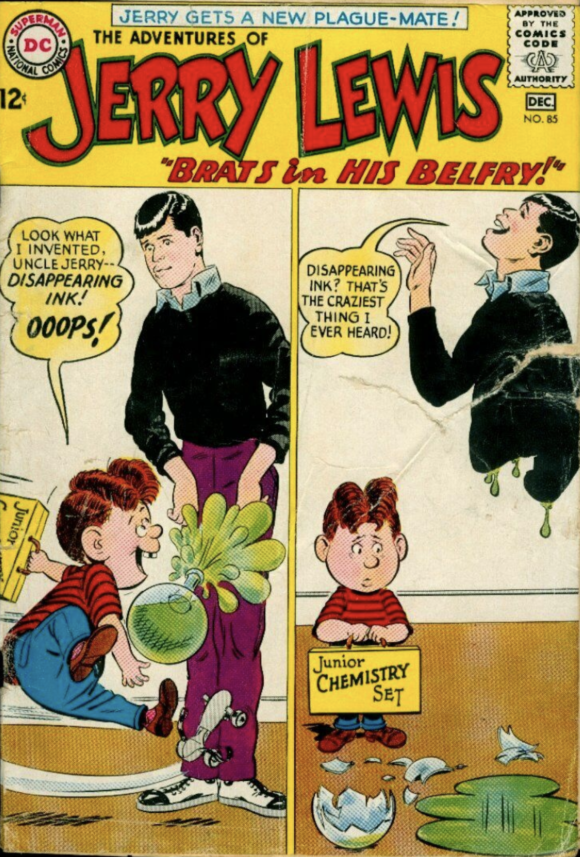 Batman (ABC-TV, 1966). I’m once again going to stretch the definition of this installment’s topic and include the April 20, 1966, episode of Batman, “The Bookworm Turns” in which Jerry made an appearance as the very first “window pop-up cameo” guest. I wrote about this episode at greater length in fellow 13th Dimension columnist Jim Beard’s ZLONK! ZOK! ZOWIE! The Subterranean Blue Grotto Essays on Batman ’66 – Season One. Holy human flies!

The Adventures of Jerry Lewis #97 (Nov./Dec. 1966). According to the indispensable Comics.org, this issue of TAOJL shipped on September 20, 1966, exactly six months after Jerry’s pop-up appearance on Batman, which in those days was the preferred lead time for producing an issue of a comic book. It was probably a case of editor Murray Boltinoff or someone else recognizing the synergistic publishing opportunity of a team-up between the DC-owned Batman and the licensed Jerry character. With the Batman already at fad status, it made sense to try and boost the sales of Jerry’s title with a guest-appearance by the Dynamic Duo. Story by Drake and Oksner. 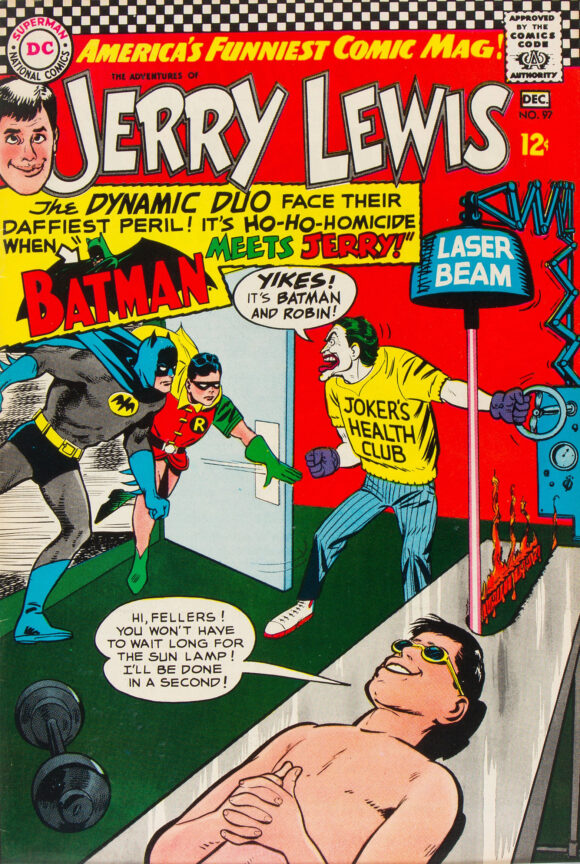 The Adventures of Jerry Lewis #105 (March/April 1968). One assumes that the Batman crossover was successful enough that they decided next to risk Superman’s reputation by tossing him into the mix with Jerry. 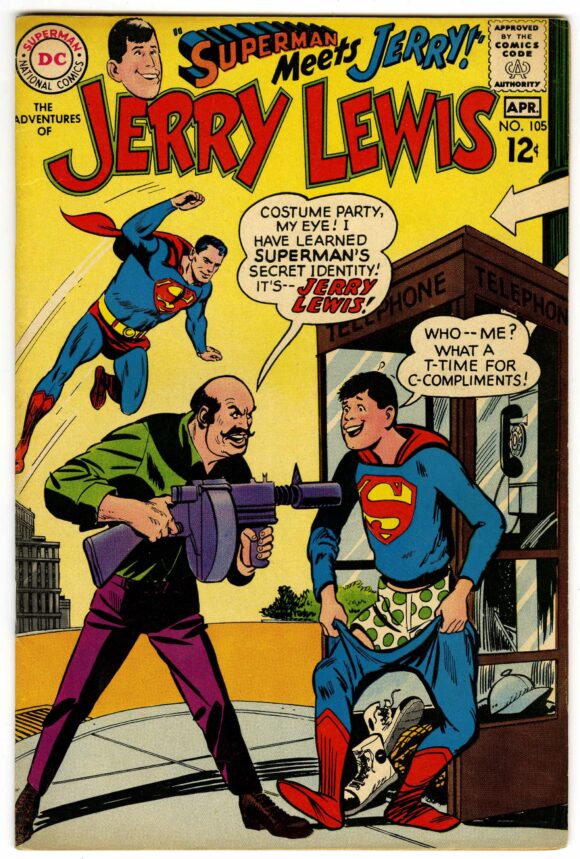 The Adventures of Jerry Lewis #107 (July/Aug. 1968). The second of the two comics I brought with me to have signed by Jerry during my brief Broadway backstage handshake with the star. His reaction to these decades-old comics? “I’ve got stacks of these somewhere at home. What a blast.” In the ‘00s and early ‘10s, I twice attempted to publish a collection of Jerry Lewis comics with a major art publisher; DC was on board, but we could never get through to the Lewis organization, despite my persistence. I finally gave up after repeated tries contacting his son, the family archivist, on Facebook. He’d asked for a copy of the book proposal, which resulted in months of ignoring me and ended with him telling me to stop bothering him. Don’t call us, we’ll call you. Not! 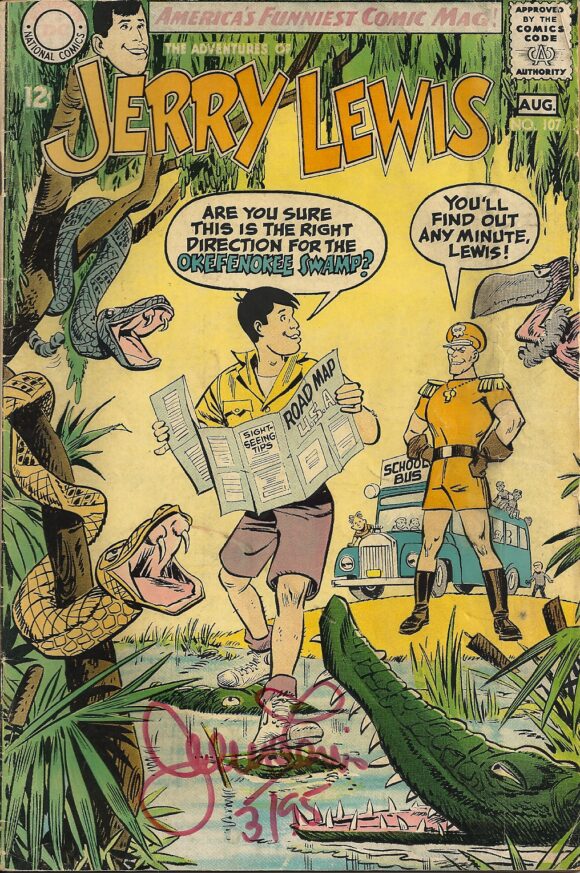 The Adventures of Jerry Lewis #112 (May/June 1969). The Dumbest Goof Alive and the Fastest Man Alive crossed paths in this story by E. Nelson Bridwell and Oksner as Jerry finds himself at a tailor shop that specializes in making costumes for super-villains and is turned into the Flash by Abra Kadabra’s magic wand. 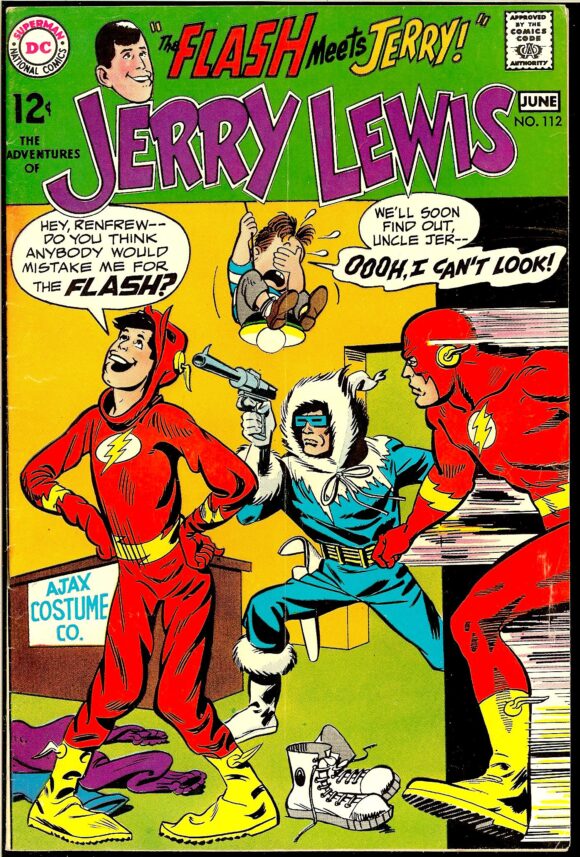 The Adventures of Jerry Lewis #117 (March/April 1970). Jerry makes like The Brave and the Bold one final time in this team-up with Wonder Woman. Unfortunately, this was during her non-powered, non-costume Mike Sekowsky period so we didn’t get to see her (or Jerry, for that matter!) in all her star-spangled glory. But the clock was ticking on TAOJL, and it would be gone less than a year after this Alan Riefe/Oksner/Tex Blaisdell tale saw the light of day. As I recall, at no point in the story does Jerry address Diana as “Hey, laaaaaydy!” Oh well. 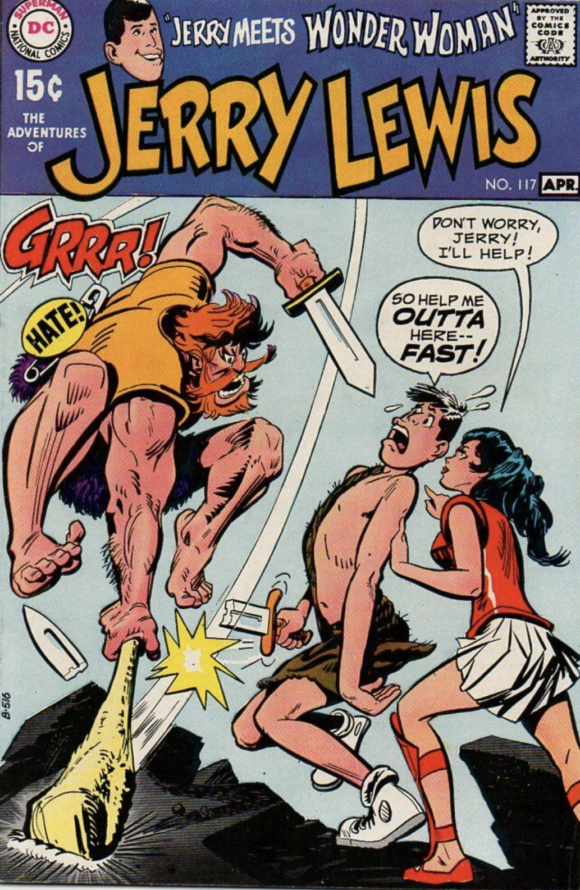 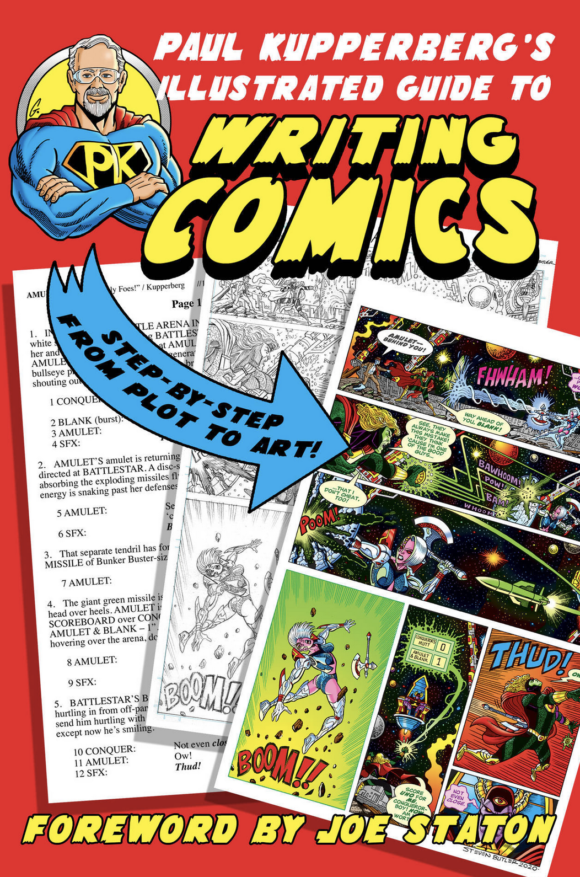