Our esteemed columnist wraps up his series on classic house ads… 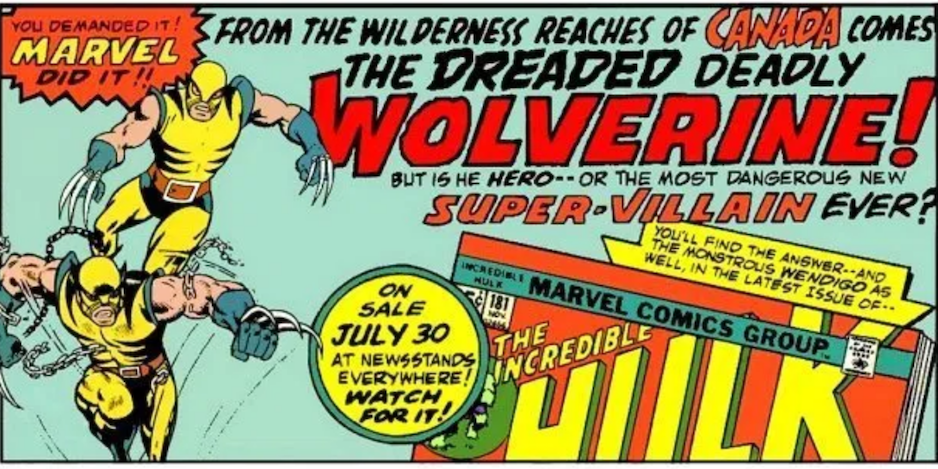 Paul Kupperberg has been house-ad hunting with a series of columns on those colorful bits of overheated marketing that in some cases are more memorable than the comics they ran in – or even advertised. 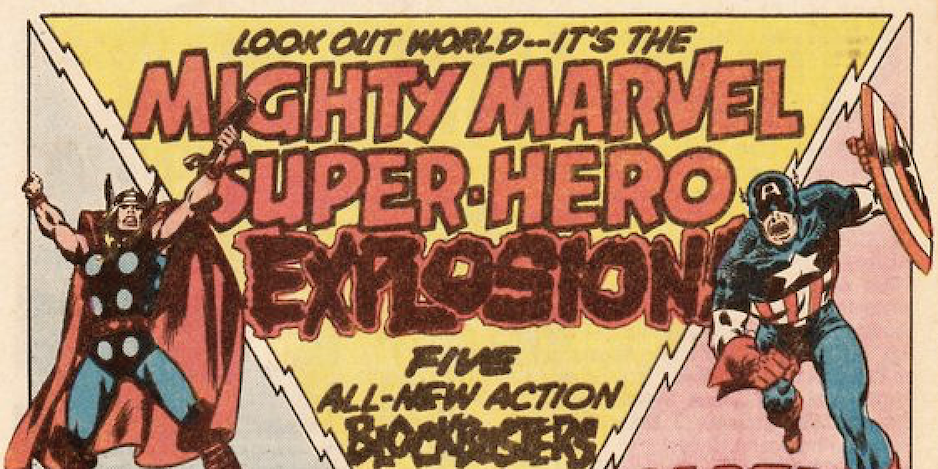 Marvel entered the 1970s on a roll, expanding their lineup of titles in both number and genre. For a company that made its rep in the 1960s on a straight-up diet of superheroes, their big hits for the decade would be licensed sword & sorcery and science fiction titles, both of which were done at the insistence of editor Roy Thomas.

Marvel seemed to have adopted a basic “throw everything at the wall and see what sticks” publishing attitude. The company would have seven editors-in-chief in 10 years, beginning with Stan Lee and ending with Jim Shooter — with Roy, Len Wein, Marv Wolfman, Gerry Conway and Archie Goodwin in between, a constant churn and turnover of creative directions and ideas. Supporting characters (and even the occasional villain) were awarded their own books or features, and a plethora of Showcase-style umbrella titles were introduced to spotlight new creations. They had a lot to show off.

Which brings us to MY 13 FAVORITE 1970s MARVEL COMICS HOUSE ADS, in no particular order:

Conan the Barbarian: On Sale Soon! (1970). It didn’t look like Marvel was pinning any particular hopes on Conan the Barbarian. It was a licensed property acquired cheaply, mostly to keep Roy Thomas, their second-most prolific writer after Stan, happy. The book was handed to young, untested artist Barry Smith not because he was necessarily the right pencil for the job (fortunately, he was), but because of his low, beginner’s page rate, which helped offset whatever licensing fee Marvel was paying to the estate of Robert E. Howard for the use of the character. 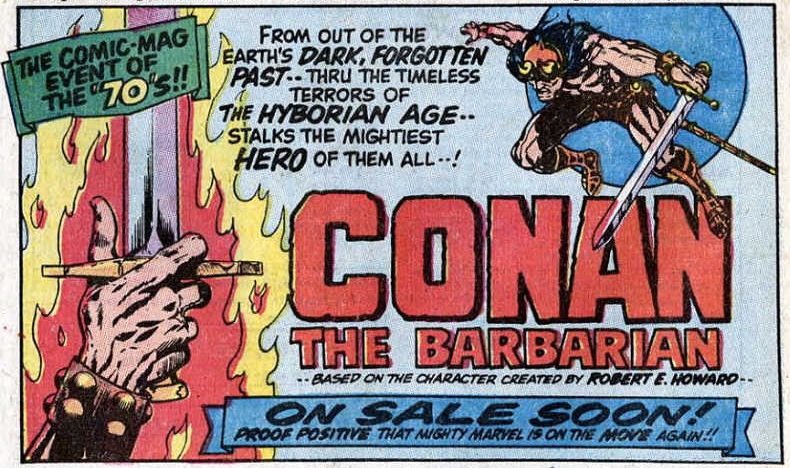 I suppose we could be forgiven at the time for taking the introductory issue’s half-page ad’s standard Marvel hyperbole (“The comic-mag event of the ’70’s!”) with a grain of salt… I mean, what did Marvel ever publish that wasn’t hyped as the best or the greatest or most important?

Kull the Conqueror #2 (1971). Hoping to capture that Robert E. Howard lightning in a bottle a second time, Marvel gave their next Roy Thomas-scripted barbarian the full-page treatment, albeit in a generic “On Sale Now!” ad template. For my money, this Marie Severin pencilled (and colored) title had it all over Smith’s Conan; #1 was inked by Wally Wood, and all but the last of the rest of its 10-issue run were inked by Marie’s brother, John, the best sibling art team since Los Hermanos Buscema. 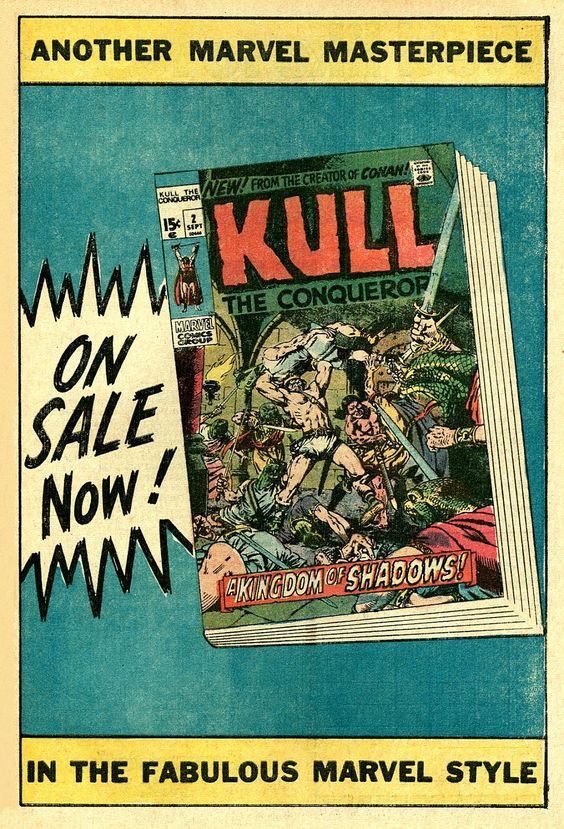 Amazing Adventures: “The Inhumans Are Coming!” (1970). One of the aforementioned Showcase-style umbrella titles was Amazing Adventures, a resurrection of the 1961 title that evolved into Amazing Adult Fantasy before morphing into Amazing Fantasy #15, featuring the first appearance of Spider-Man. This iteration of AA served as the home for two spin-off features — the Inhumans (written and penciled by Kirby) from the Fantastic Four and Black Widow (written by Gary Friedrich, penciled by John Buscema) from the Avengers. Predating cover credits, the ad made sure to make mention of the creatives, which included Marvel’s two top  artistic talents. 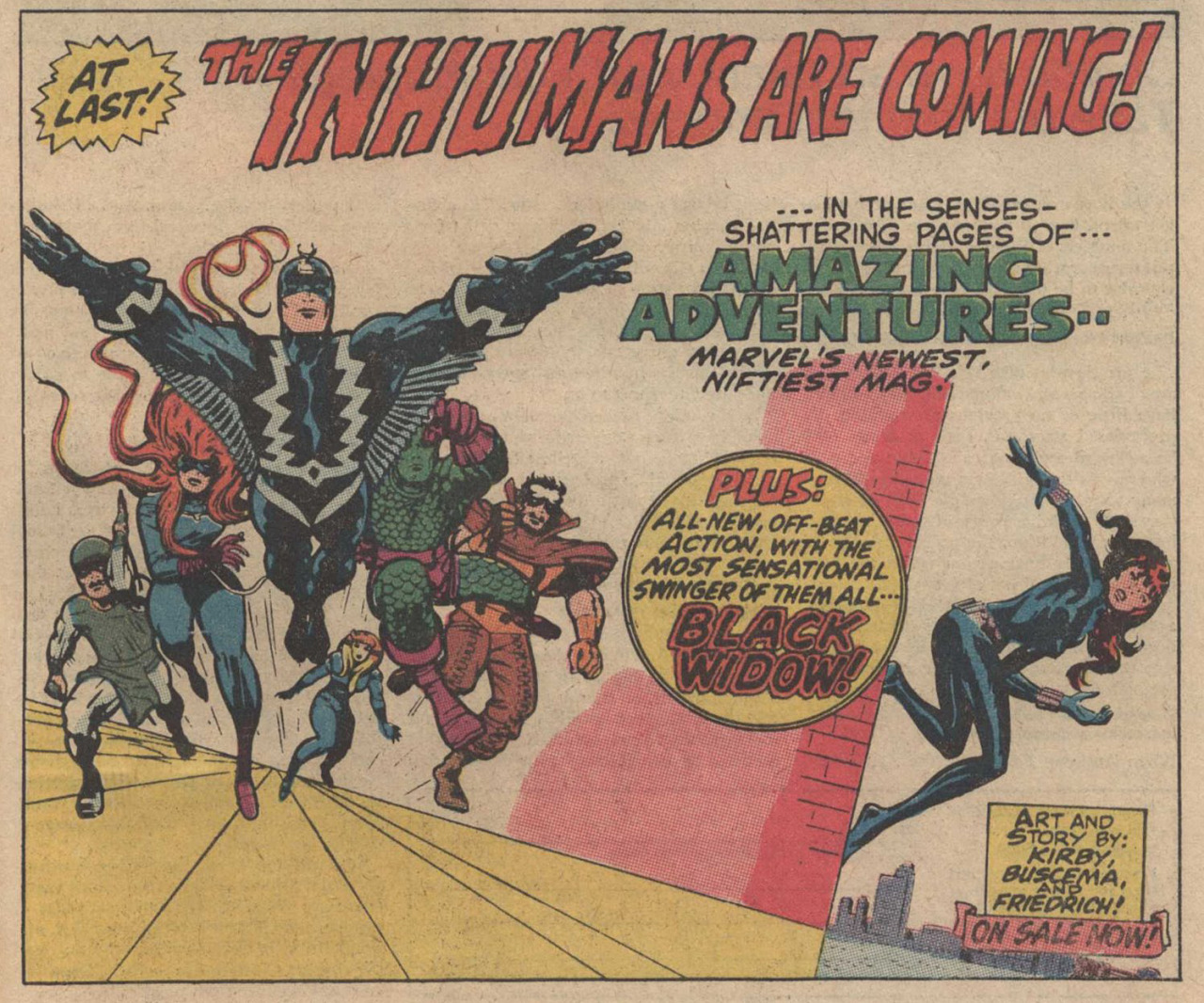 Pick a Pair of Winners From Mighty Marvel! (1970). Another familiar “Now on Sale!” ad template made it easy for Marvel to fill an empty ad page to promote its ongoing, workhorse titles… or in the case of Sgt. Fury and his Howling Commandos, warhorse titles. This mix of superhero and war comics in a single ad is an interesting glimpse into the Marvel mentality; whatever their genre, all “Mighty Marvel” characters co-existed equally. 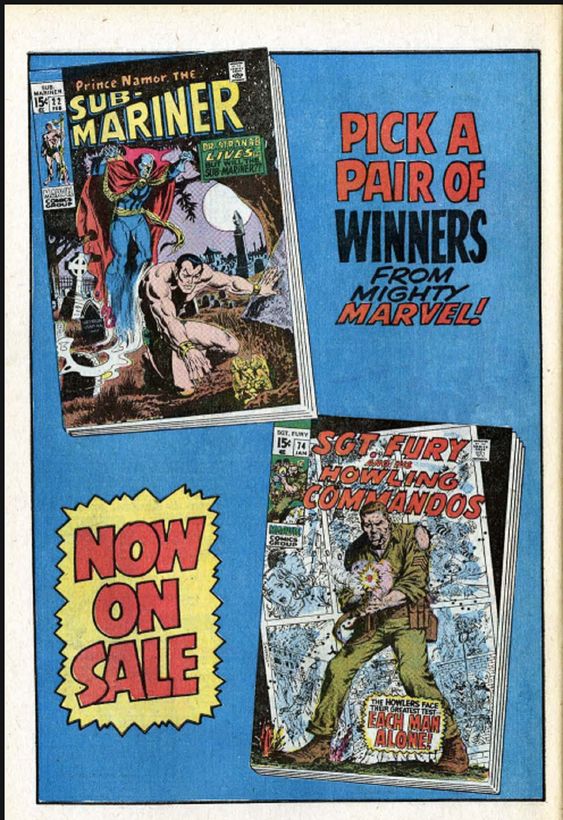 The Western Kid #4 (1972). Even the next-to-final issue of a title reprinting an obscure 1950s Western character could be shown some love, as long as it was “On Sale Now!” 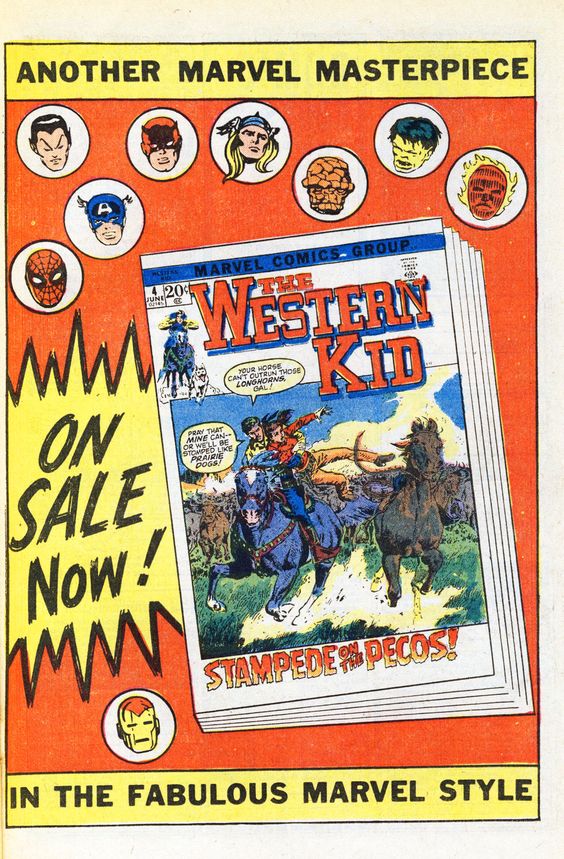 The Incredible Hulk #181 (1974). Nobody demanded it but Marvel did it anyway. There was no way that anyone, including  creators Len Wein, Roy Thomas, John Romita, and Herb Trimpe could have foreseen how this runty little Canadian with an attitude (actually introduced in the last panel of Hulk #180) would become one of the company’s breakout stars, but someone up there thought enough of the idea to spotlight Wolverine over his green-skinned host in this ad.

The X-Men: “Still Uncanny After All These Years!” (1980). In 1975, Len Wein and Dave Cockrum resurrected the X-Men in Giant-Size X-Men #1 and included the snarly Wolverine in the new cast of international heroes. Wein would give way to Chris Claremont and eventually Cockrum would be replaced by John Byrne, but in 1980, this half-page ad used old Cockrum art — and touted his successor. 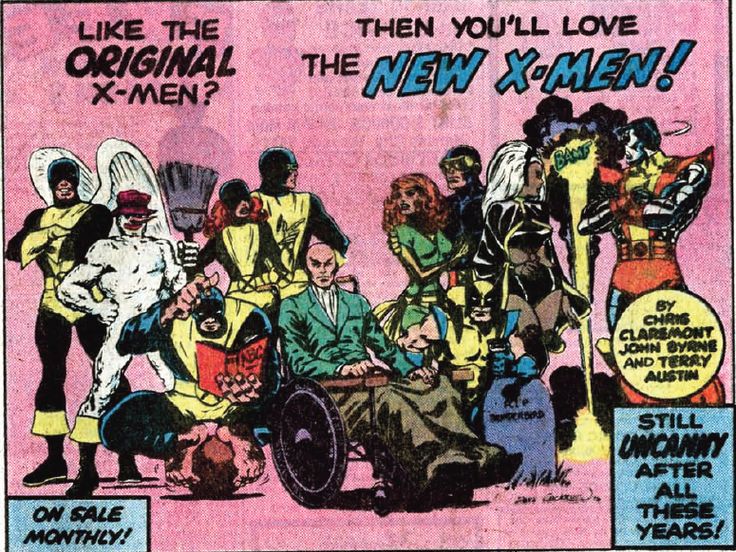 Spider-Man and Captain America Ricochet to Freedom! (1976). It wasn’t just Hostess Fruit Pie ads that got the services of the Marvel superheroes. Really, any licensee could put their product next to Spidey or Cap or whoever in a comic-style ad. And yeah, this is a paid ad, but as I pointed out in MY 13 FAVORITE 1960s MARVEL HOUSE ADS, Marvel never neglected the merch. Even when it put the characters in the most asinine positions, like being launched from giant pistols that need a squad of soldiers to manually pull the trigger by heaving on ropes. At least they got Twinkies in the Hostess ads. 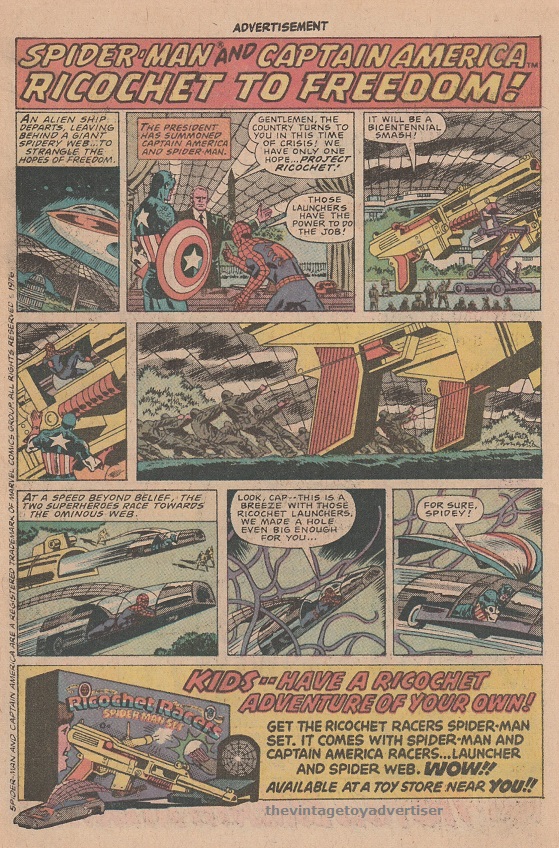 From the Vintage Toy Advertiser

Star Wars #1/Tarzan and John Carter of Mars (1977). The first issue of the Marvel Comics adaptation of “the great new space-fantasy film by George Lucas” hit the newsstands about six weeks before the movie itself hit the big screen in the U.S.A. Lucasfilm originally approached Marvel about doing an adaptation, but movie tie-in comics didn’t sell in those days and publisher Stan Lee passed until Roy Thomas talked him into it. The sales of the six-issue adaptation by Thomas and Howard Chaykin and the subsequent 107-issue run of Star Wars (and a few dozen issues of spin-off titles) would, according to later editor-in-chief Jim Shooter, literally save Marvel’s financial bacon in 1977-78. Their Tarzan and John Carter of Mars adaptations, on the other hand, not so much. 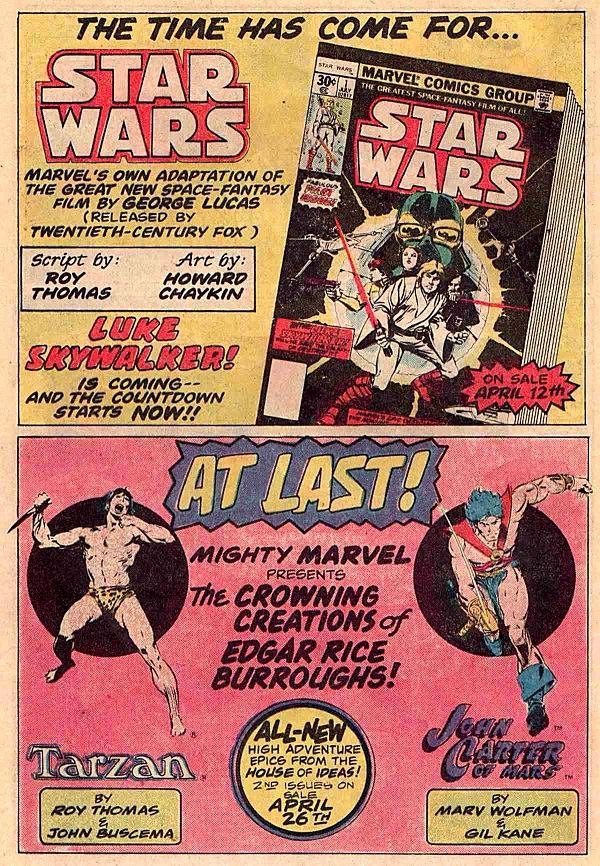 “Look Out World, It’s the Mighty Marvel Super-Hero Explosion!” (1978). So much to hype, so few pages to hype it on! Marvel was by now going full steam ahead, dominating the market, and one can’t help but wonder if the timing of this “Marvel Super-Hero Explosion” ad wasn’t a slap in rival DC’s face over its much hyped “DC Explosion” that became the “DC Implosion” that nearly sunk the company. By the way, did that “all-new” Captain Marvel ever catch on? 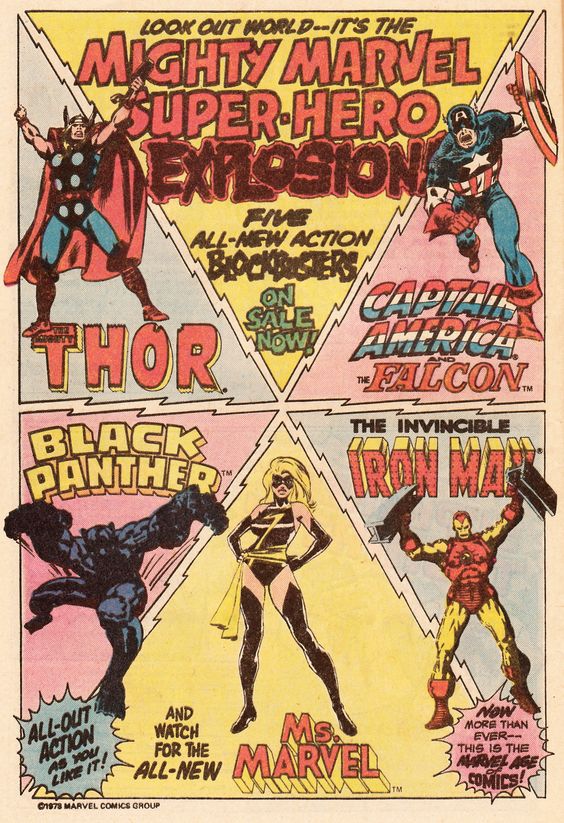 “Mystical Marvel’s Supernatural Sensations!” (1978). Boo! Supernatural superheroics from the “Haunted House of Ideas.” What is it about wavy panel borders that’s so danged spooky anyway? 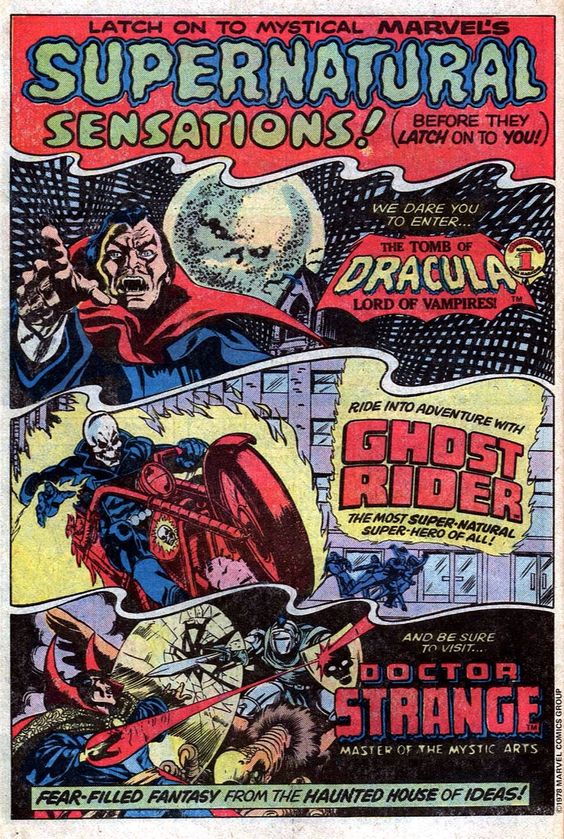 The Savage She-Hulk #1 (1979). It surprised me at the time that this ad for the upcoming first issue of Savage She-Hulk (“Watch for it!”) totally left out any mention of its creators, Stan Lee and John Buscema. It only made sense when the second issue hit the stands and Stan the Man and Big John were nowhere to be seen in the credits; She-Hulk was a case of create and run. Why get readers’ hopes up when it would be left to others to carry on Jennifer Walters’ story? 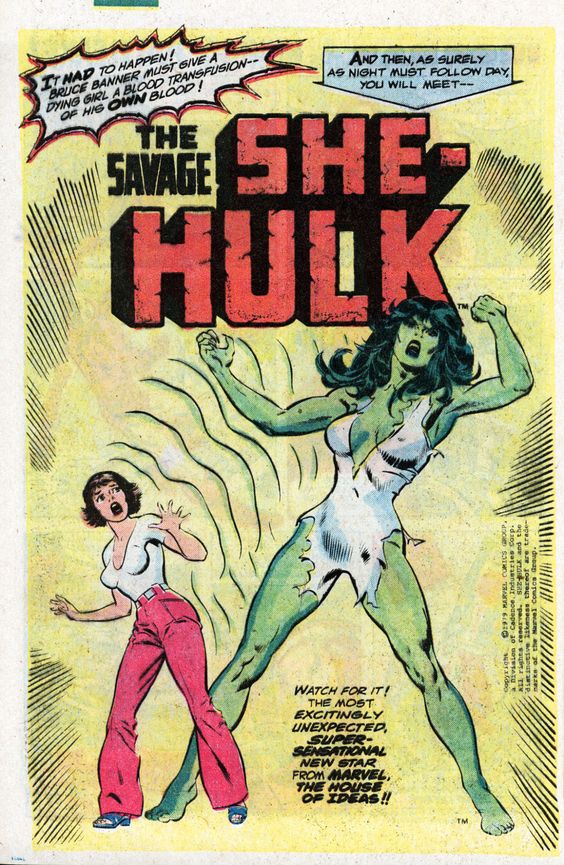 Micronauts #7: The Marvelous Micronauts Meet the Macabre Man-Thing (1979). After the success of Star Wars, Marvel was willing to take a chance on licensed properties. Bill Mantlo and Michael Golden’s Micronauts was both a commercial and creative success. 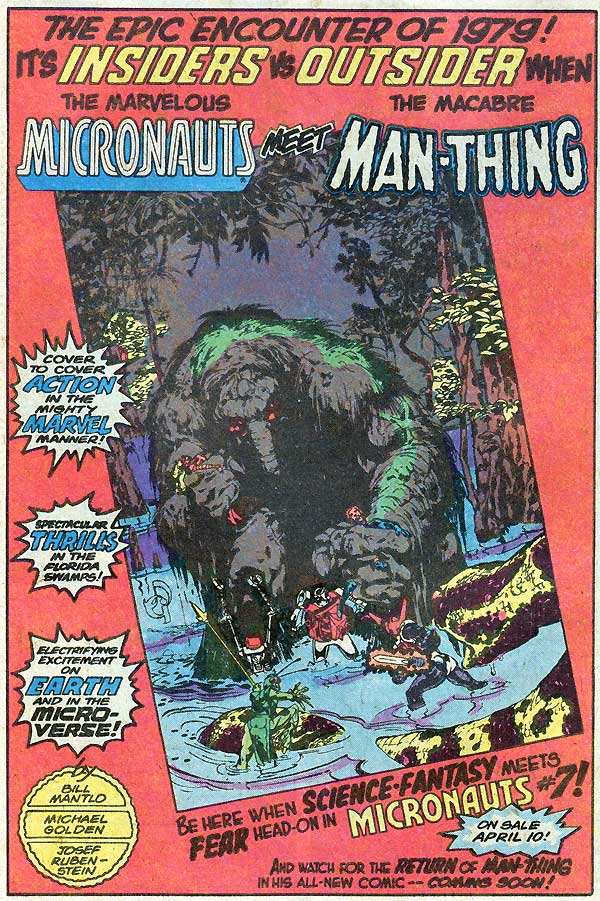