The celebrated Mr. K follows up his look at ’60s DC ads with a plunge into the Marvel Age… 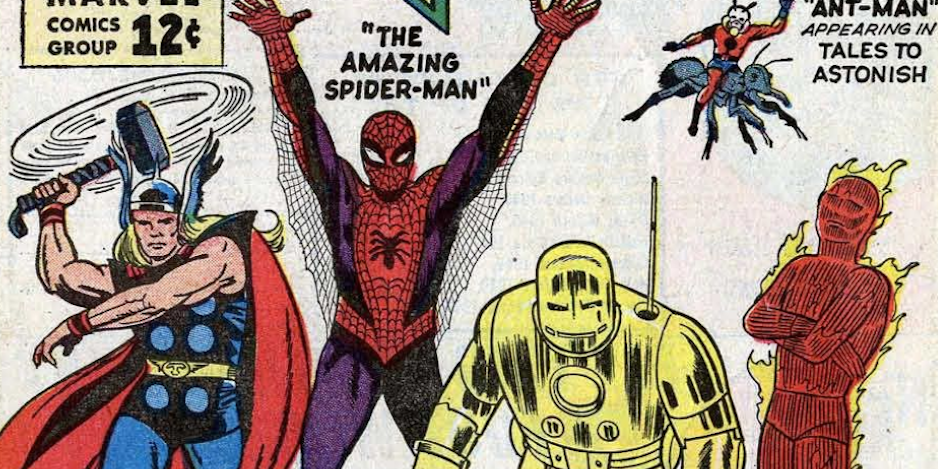 UPDATED 6/10/22: This is how my mind works sometimes: Today, we’re re-presenting a groovy piece about Palisades Park’s DC Comics promotion of the Silver Age. Why? Because in this week’s RETRO HOT PICKS, we noted that Freddy Cannon’s Palisades Park was a Top 10 hit in 1962. But that, in turn, got me thinking about Paul Kupperberg’s far out column about DC’s 1960s house ads, which first ran in January 2021. Naturally, that led me to this sequel, which first ran in February 2021. Right on. — Dan

Unlike DC’s house ads, Marvel’s early 1960s ads weren’t particularly slick, but that didn’t make them any less effective than those of their Distinguished Competition. Like the comics themselves, Marvel’s ads felt a bit slapdash, something thrown together from whatever bits and pieces of art were laying around.

And, compared to DC’s, maybe they were. DC had a good-sized production department overseen by Jack Adler and staffed by half a dozen or more artists, including master letterer Ira Schnapp, while Marvel’s was Sol Brodsky and John Verpoorten at drawing tables in the back of their narrow, cramped Madison Avenue offices. 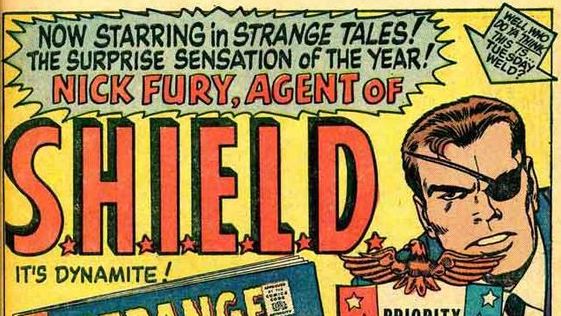 But what counts is results and those not-so-slick, slapdash ads were surefire appetite whetters, promising a whole new universe of comics and characters to eager readers. And the ads did get better and slicker with time, just like the comics themselves.

Here are MY 13 FAVORITE 1960s MARVEL HOUSE ADS in no particular order:

Amazing Adult Fantasy/Fantastic Four (1961). To begin at the beginning, at the Big Bang of the Marvel Age, with the ad for Amazing Adult Fantasy #7 (the numbering continued from Amazing Adventures) and Fantastic Four #1. Interesting to note that AAF, which featured the pre-Marvel company’s then standard horror/monster/SF fare, and would, eight issues later, be retitled Amazing Fantasy and introduce Spider-Man, got the top spot on the page, relegating the new and untried FF to the second tier. 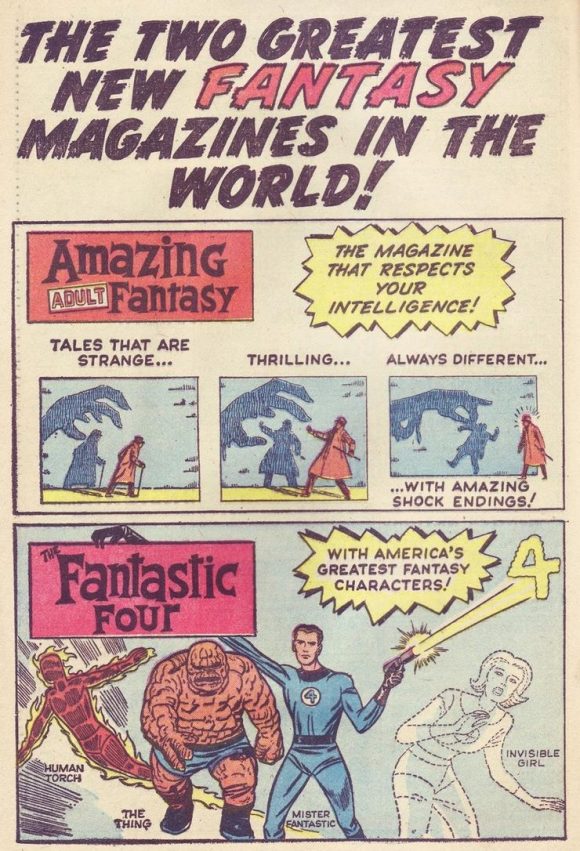 Sgt. Fury and his Howling Commandos #1/Fantastic Four #16 (1963). War is hell… “with action in the Fantastic Four style!” And Sgt. Fury always had more of a superhero than a straight war comic vibe so comparisons with the Fantastic Four weren’t far off the mark, especially as both titles were written and drawn by the team of Stan Lee and Jack Kirby. As for the FF half of the ad, one assumes that fan mail had been running heavily in favor of Doctor Doom, prompting Stan to spotlight his fourth appearance in 16 issues. And, yes, I’m sure it was Stan writing these. Who else would have dared to hype a comic as “the next greater-than-ever issue?” 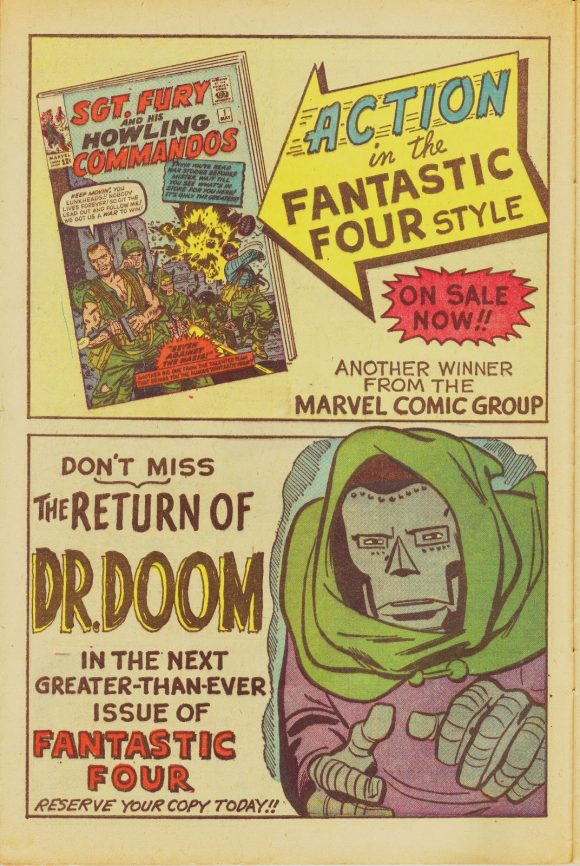 The Avengers #1 (1963). “Don’t Miss… Another Big One from Marvel!” Even Stan knew when to shut up and let a picture speak for itself. 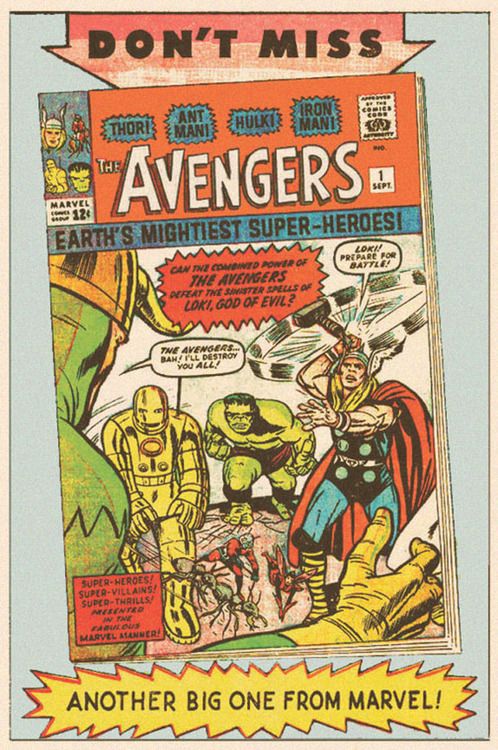 Daredevil #6 (1965). You know what was really rare in comic book house ads in those days? Creator credits! But something must have been happening with the sales of Daredevil — or maybe they were trying to make something happen with the sales of Daredevil — but for what may have been the first time, Stan was hyping an artist by name, “the inspired artwork of wonderful Wally Wood!” Not only is Wally named, but he’s given a callback and a “quote” in the next blurb! Readers were even warned that the “ish” may already have sold out on newsstands near them (oh, no!) but teased #7’s upcoming appearance by the Sub-Mariner. 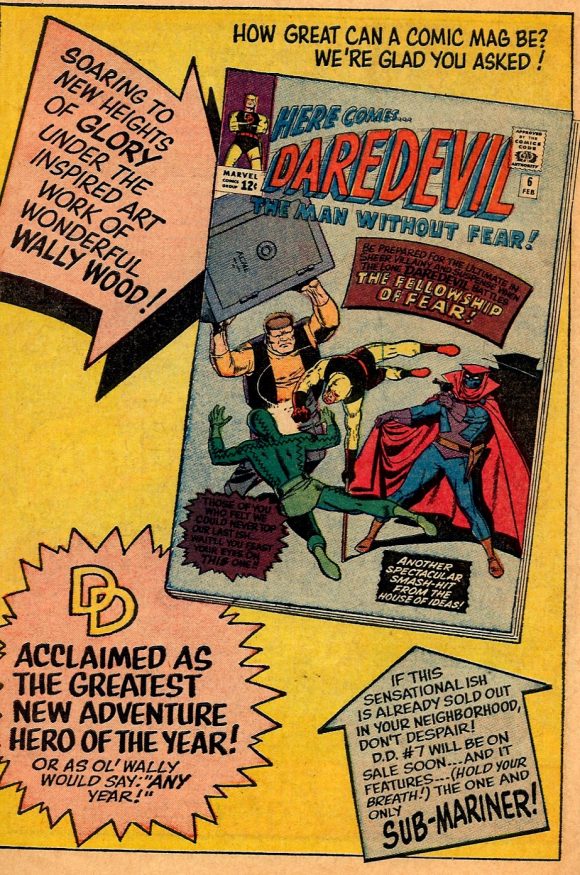 “Watch for the Greatest Symbols in Comics” (1963). Leave us not forget that it was Stan Lee who, beginning with the cover of FF #3, branded it as “the greatest comic magazine in the world,” months before he would have gotten sales numbers on the first issue. The man knew how to sling the hyperbole and was never shy about thumping Marvel’s chest and proclaiming it the greatest. So, if the FF was the “the greatest,” they must be published under the banner of “the greatest” comic mags which, by extension, can only print “the greatest” of all comics characters! Marvel was on the move and Stan was doing his darnedest to keep the momentum going. 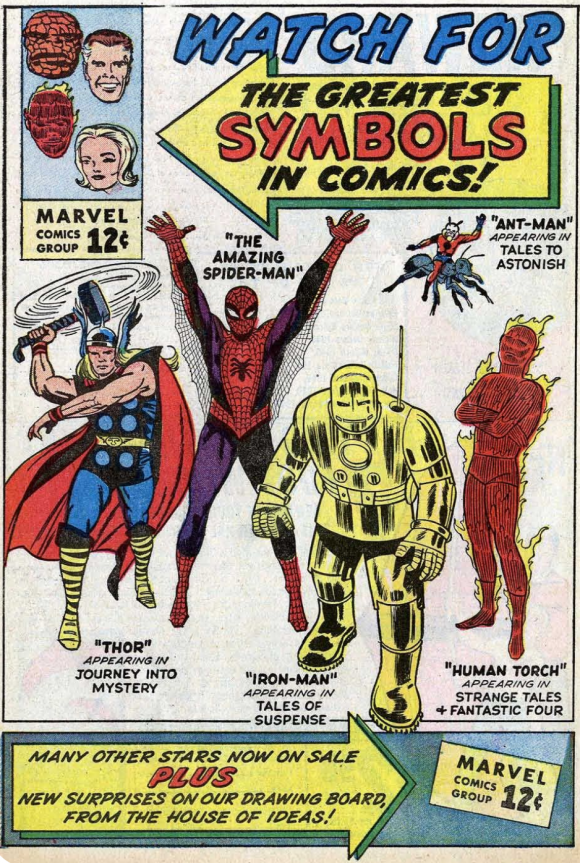 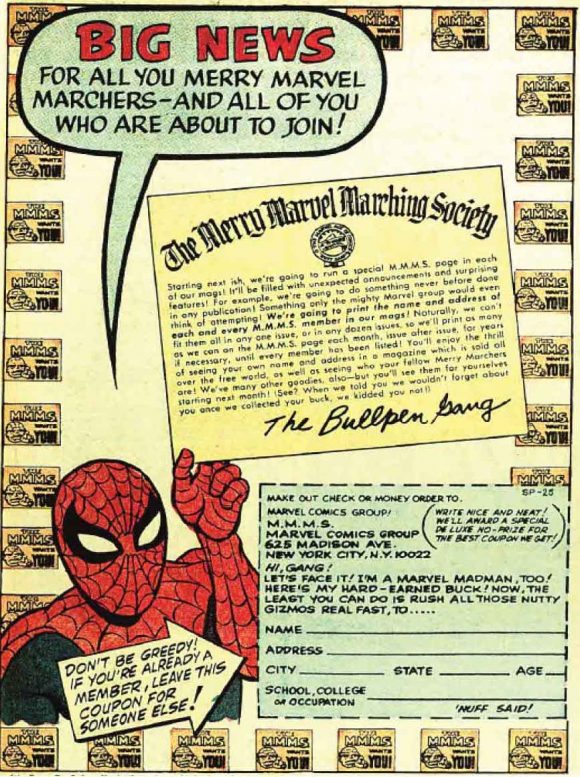 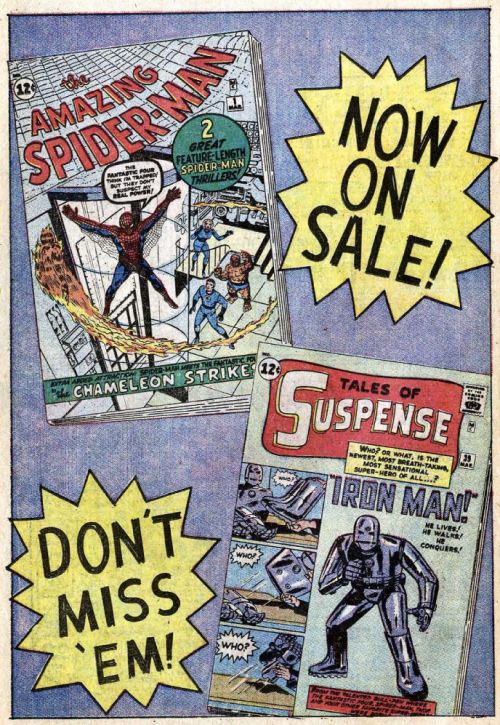 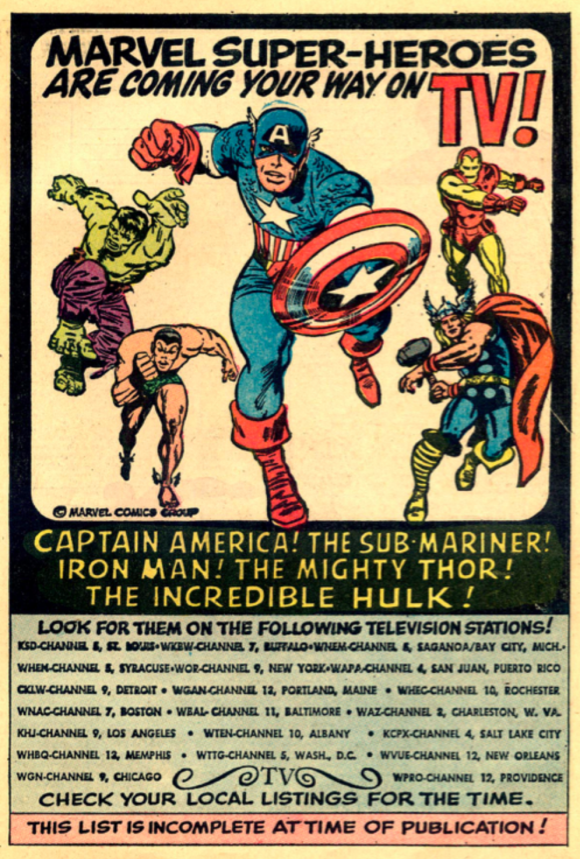 The stories were taken directly from the comic book pages, using a very limited animation and pan-and-scan technique that gave more of an illusion of movement than anything else; The Return of Captain America, taken from The Avengers #4 is as good a bad example as any.

The X-Men #10 (1963). Is it just me, or were they trying too hard to convince readers that this blond Tarzan wannabe in fur pants and booties was something new and revolutionary? I mean, was Ka-Zar really a “whiz-doozy” of a character? But I love the ad’s energy and over-the-top copy. I mean, “super-sensational idol-to-be”? 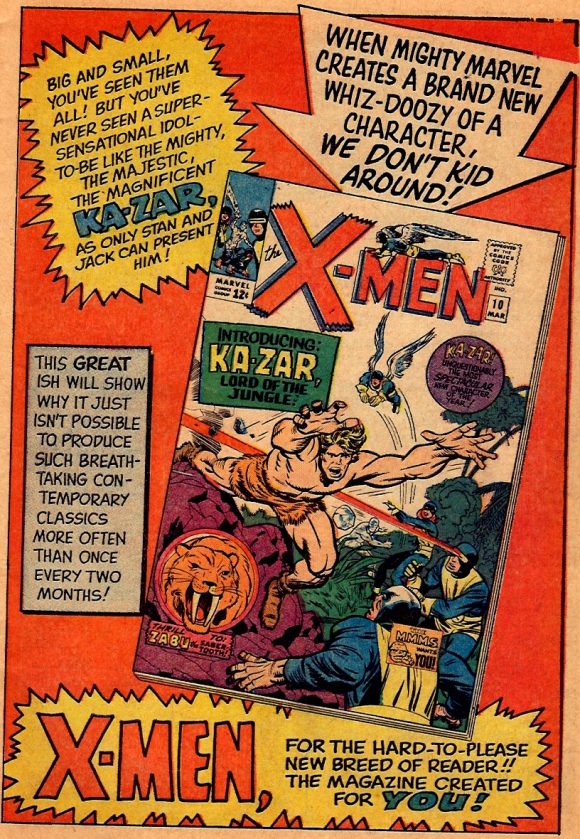 Strange Tales #135/Tales to Astonish #70 (1965). It only made sense for Marvel to double up on the ads for their double-books, especially when two of the titles were introducing new ongoing features, Nick Fury, Agent of S.H.I.E.L.D. over in Strange Tales and Sub-Mariner in Tales to Astonish. At the time, Marvel’s distributor (Independent News, a sister company of DC Comics) would only carry a limited number of their titles, forcing them to do these double books and publish bimonthly titles in order to squeeze in new characters and features. 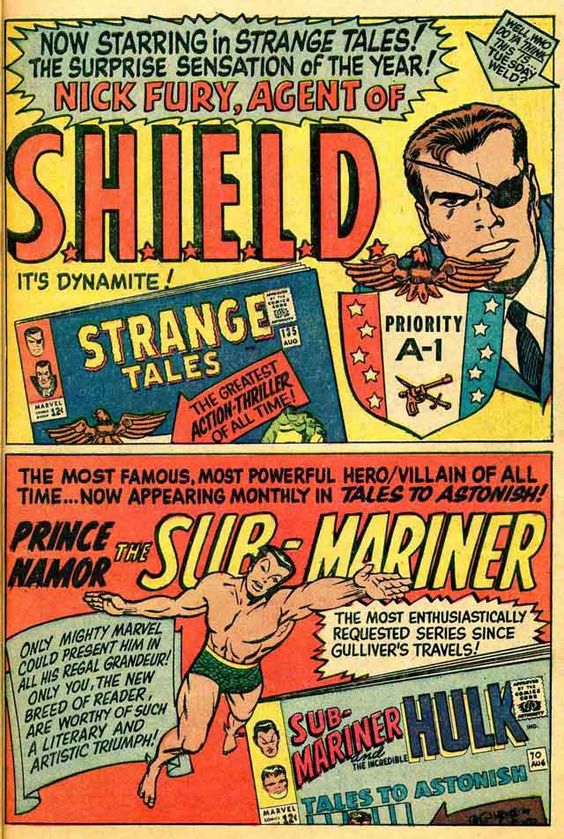 Doctor Strange #169/Nick Fury, Agent of S.H.I.E.L.D. #1 (1968). A few years later, Marvel got itself a new distributor and the gloves — and title restrictions — were off! An easy expansion of its schedule was to finally split up the double books, and Marvel announced it proudly and loudly, as with this ad for the one-time Strange Tales roommates, Dr. Strange and Nick Fury. 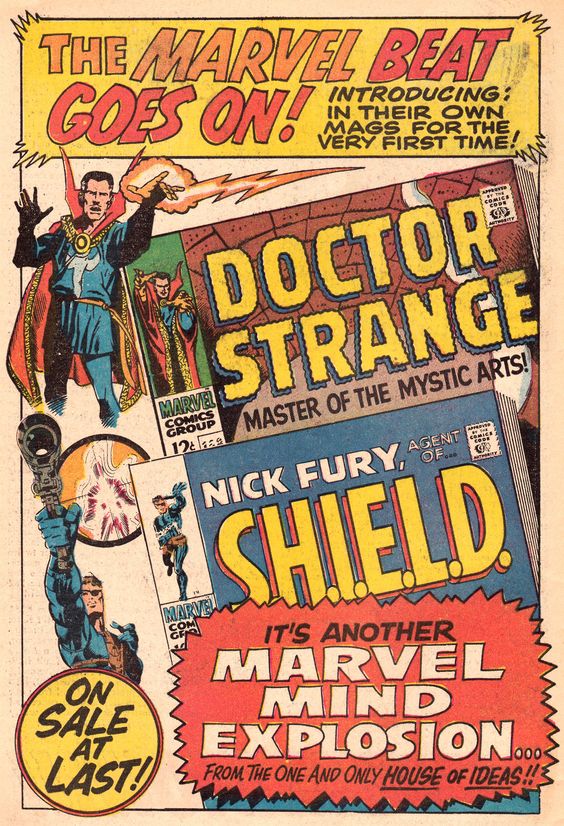 Sgt. Fury and his Howling Commandos King-Size Special #4/Marvel Super-Heroes #16 (1968). World War I and World War II… together again for the first time. At least for the purposes of this ad, which showcased two of my most memorable single issues of 1960s Marvel war comics. I can credit the Sgt. Fury story set during the ferocious 1944 Battle of the Bulge (by Gary Friedrich, Dick Ayers, and John Severin) with sparking my interest in history; after reading the story, I went to the library and took out a book on the actual battle. The introduction (and for decades, only appearance) of Phantom Eagle in Marvel Super-Heroes (another Gary Friedrich-written story) sparked a lifelong fan’s love for the art of Herb Trimpe. 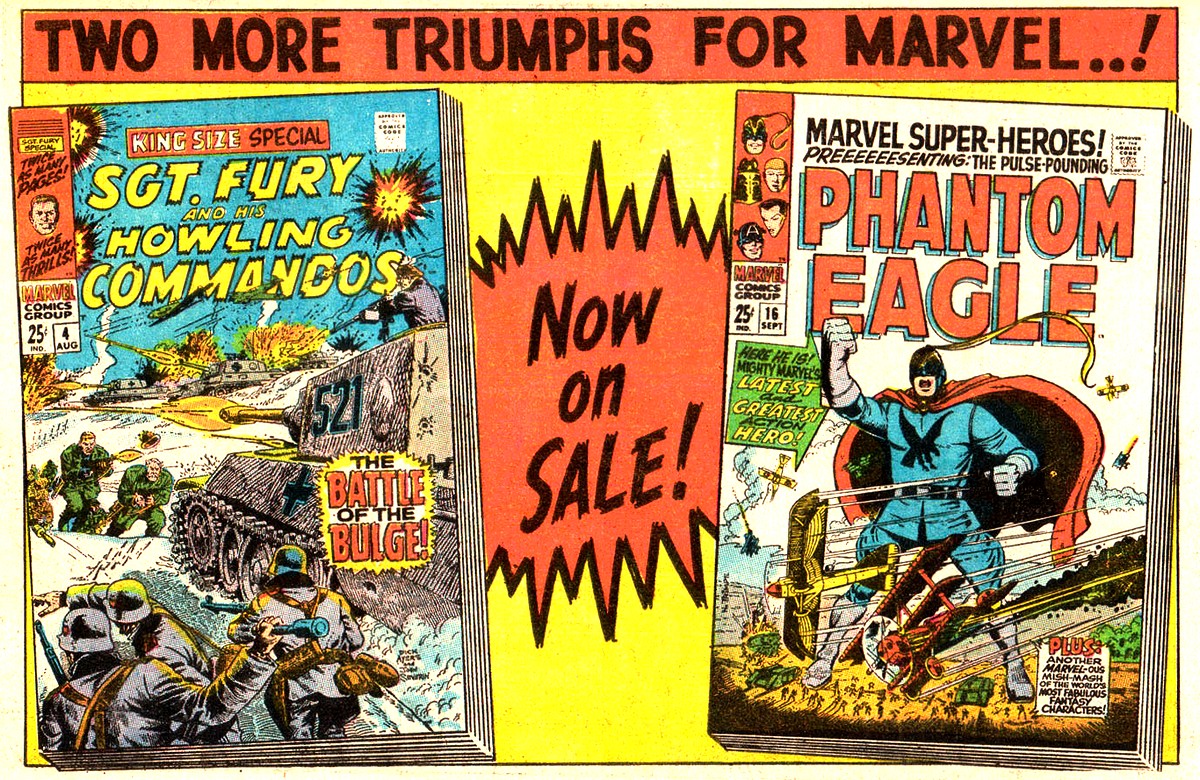 Silver Surfer #1 (1968). Stan had claimed the Silver Surfer as his own (for years, no one but the Man was allowed to write the character) and he was obviously so thrilled to finally have Norrin Radd in his own title that the house ad for the first “all-new book-length epic!” required five bursts, one arrow, a banner, and display lettering to exclaim its dramatic, king-sized, because you demanded it, frankly fabulous first issue wonderfulness. Excelsior, Stan! Excelsior!