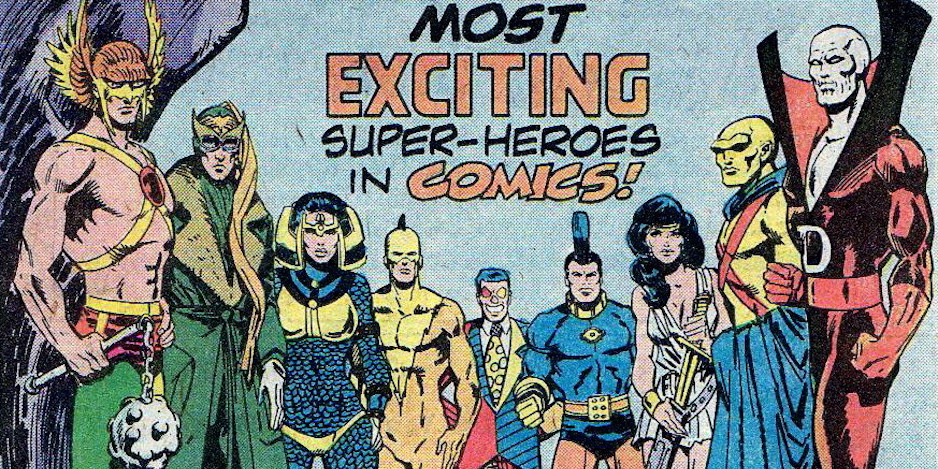 If there was one thing that unified DC Comics’ ads from the 1950s-’60s it was the awesome display lettering of the master calligrapher, Ira Schnapp. After his retirement in 1968, the job of lettering house ads went to the great Gaspar Saladino (and, later, superb practitioners like Todd Klein). Schnapp was solid and old school (he designed the letters carved into the façade of New York’s James A. Farley Post Office Building on New York’s 8th Avenue (“Neither snow nor rain nor heat nor gloom of night stays these couriers from the swift completion of their appointed rounds”); Gaspar was just as solid, but 30 years younger than his predecessor, his work had a fresher, more contemporary feel than Schnapp’s. 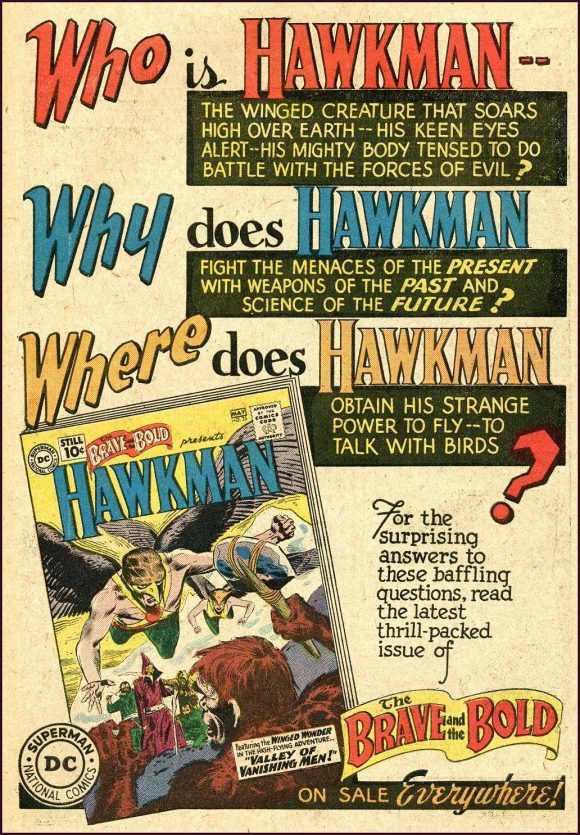 Everything about DC Comics was changing in the 1970s. The door that was closed for years to all but a very few new, younger creators was opening wider all the time. The Grand Old Men of DC (and it was all men), the editors who’d been sitting behind desks since the 1940s and the businessmen who ran the place, were also giving way to a younger breed. And, most significantly, 28-year-old Jenette Kahn replaced 51-year-old Carmine Infantino as publisher in 1976.

In no particular order of preference, here are MY 13 FAVORITE 1970s DC COMICS HOUSE ADS:

“The Great One Is Coming” and “The Magic of Kirby!” (1970). DC opened the 1970s with what many considered to be the artistic coup of the decade, the acquisition from Marvel of the services of the “King” of comics, Jack Kirby. DC devoted considerable effort to teasing the event, the second… no wait, third coming of Kirby to DC. No kidding, though, the tagline announcing, “The Great One is Coming!” was momentarily confusing to readers of the day since the only “Great One” back then was comedian Jackie Gleason and nobody wanted to see what was going on in his Boom Tube. 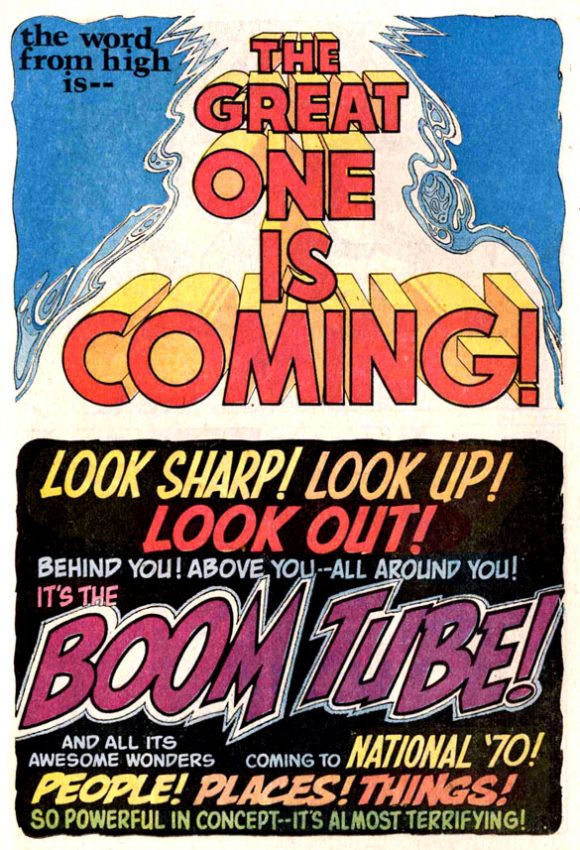 On the other hand, the cover reveals in the ad for Forever People and New Gods were eagerly awaited. 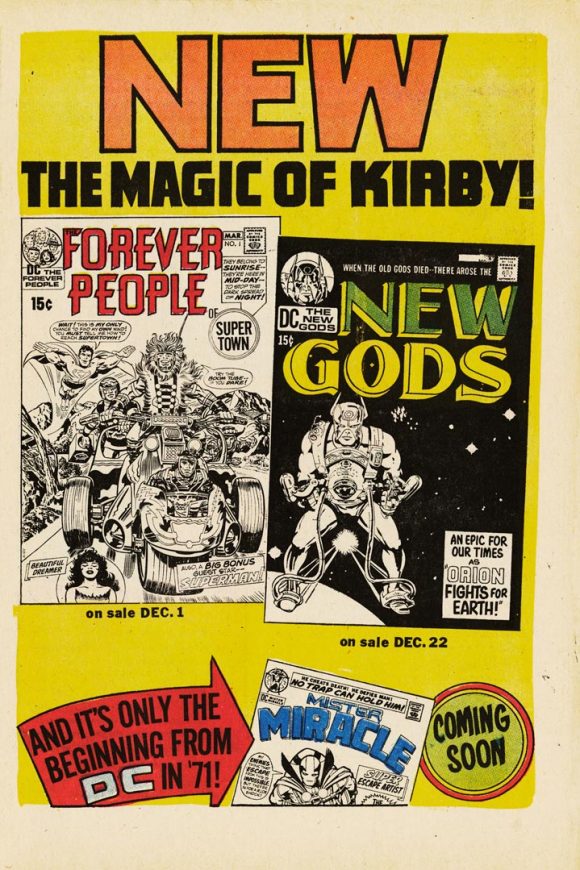 Superman’s Pal Jimmy Olsen #134/Challengers of the Unknown #77 (1970). While we’re on the subject of Kirby, his new home publisher took the opportunity to brush off a classic from Jack’s previous stint at DC, the Challengers of the Unknown from 1958, and promote it with Jack’s second issue of Jimmy Olsen… although strangely makes no “also by Jack Kirby!” connection between the two. It’s also still strange to me that they promoted “the 2nd smash Jack Kirby Blockbuster” with a “we have no confidence Kirby can draw Superman in the house style” cover by Neal Adams. That’s got to be almost as insulting as pasting a Murphy Anderson or Al Plastino face over Jack’s rendition of Superman. 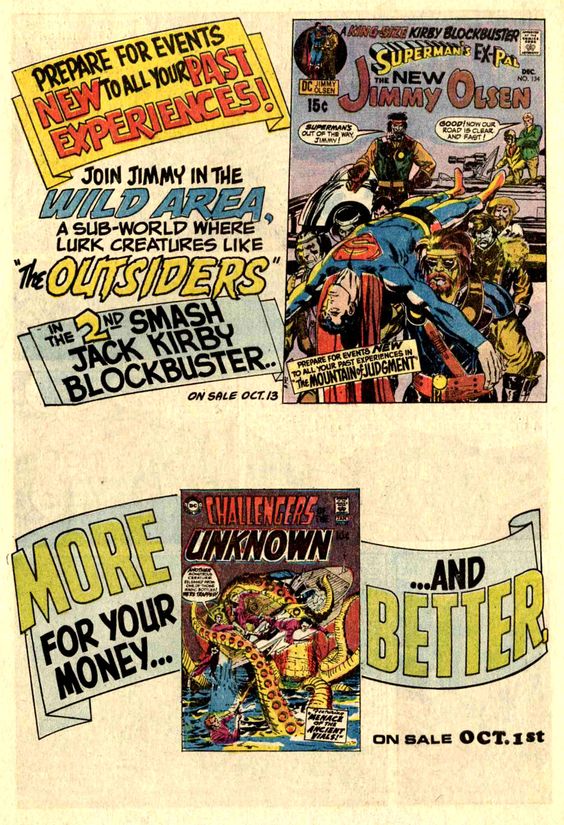 The Line of DC Super-Stars (1974). So many titles, so few pages for house ads! Never mind, though, even at this reduced size, there was still plenty to see. 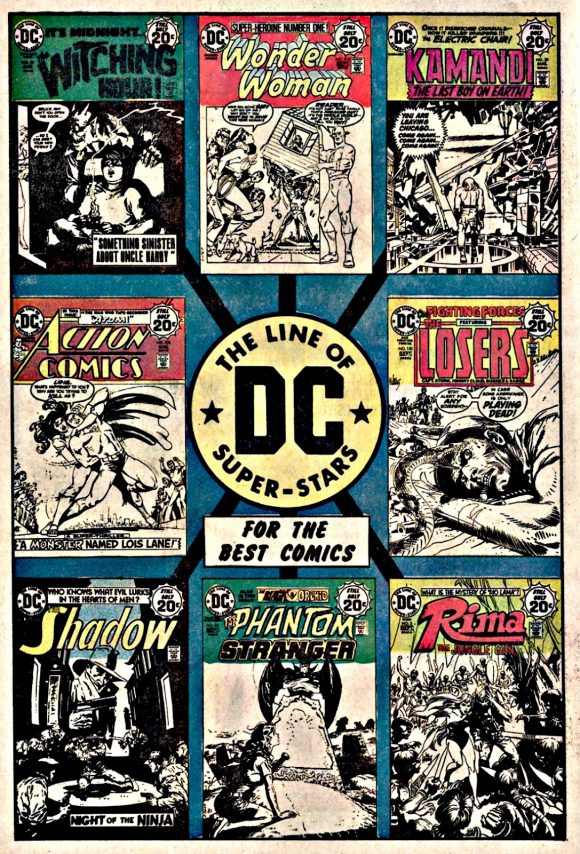 Adventure Comics #390/The Flash #196 (1970). DC didn’t have an ongoing “Bullpen Page” or “Stan’s Soapbox” to promote upcoming issues (other than the occasional “Direct Currents” text piece that had assistant editor E. Nelson Bridwell writing about creators and their projects), so they used house ads to talk directly to readers, like in “Our Valentine for you!” and the warning that you “Better reserve your copy now at your favorite newsstand!” It wasn’t exactly Stan Lee level “Face front, True Believer!” hype, but it was better than the impersonal, corporate voice of the ads of yesteryear. 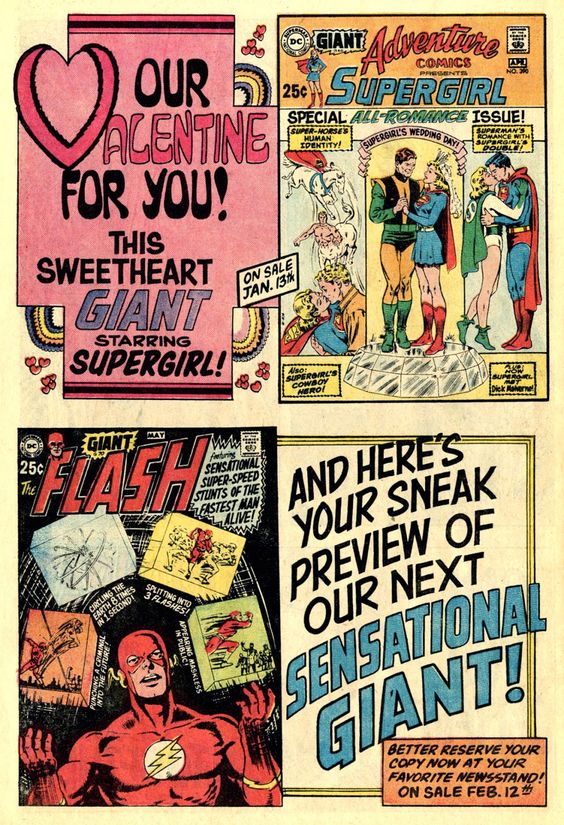 Showcase #101 (1978). This was a sign that by the late 1970s the inmates were taking over the asylum… I mean, that fans were taking over the comics industry. In 1977, DC had revived Showcase, a venerable title whose 93-issue run had ended in 1970. For the debut of a new take on Hawkman by Jack C. Harris, Al Milgrom and Murphy Anderson in the 101st issue, they went back to the 1961 house ad for the Silver Age Hawkman in Brave and the Bold, replicating the classic questioning ad’s layout to perfection, with minor alternations, like the new DC Bullet and, of course, replacing the B&B logo with Showcase. (See above.) In a sad reflection of the changing distribution model, the original’s “On sale everywhere!” was changed to “On sale March 16!” 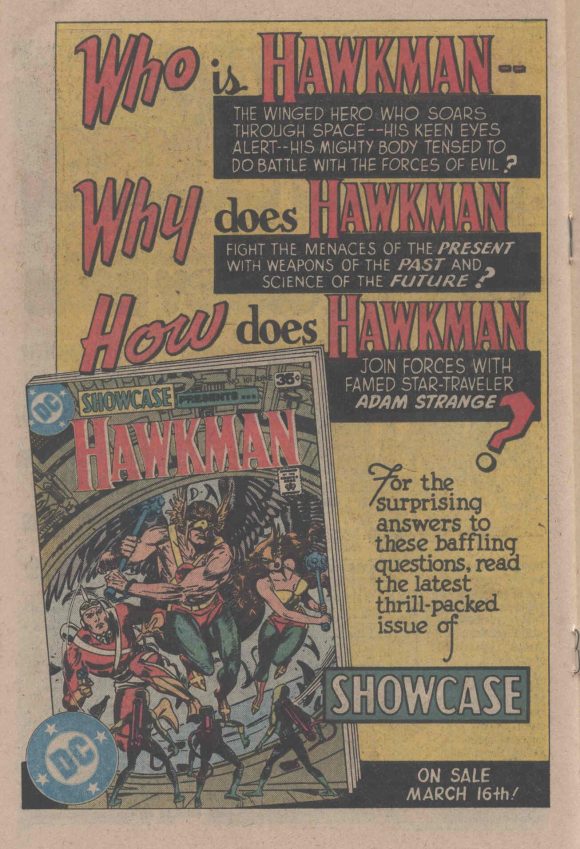 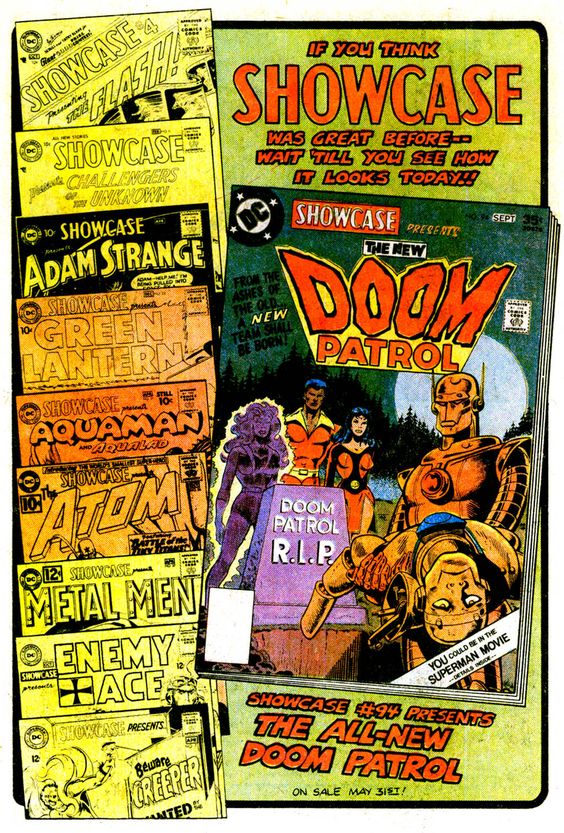 World of Krypton (1979). Yeah, another ad for another one of my projects, but this one is also Showcase-related and has the advantage of being historically significant as the house ad for comics’ first ever intentional miniseries, World of Krypton. I say “intentional” because while there had been many series that lasted only two or three or six issues, those were all launched with every intention of being ongoing. But there were only ever supposed to be three issues of WOK, by me, E. Nelson Bridwell, Howard Chaykin, and Murphy Anderson, which was originally created to be a three-issue arc for the revived Showcase. (By Todd Klein) 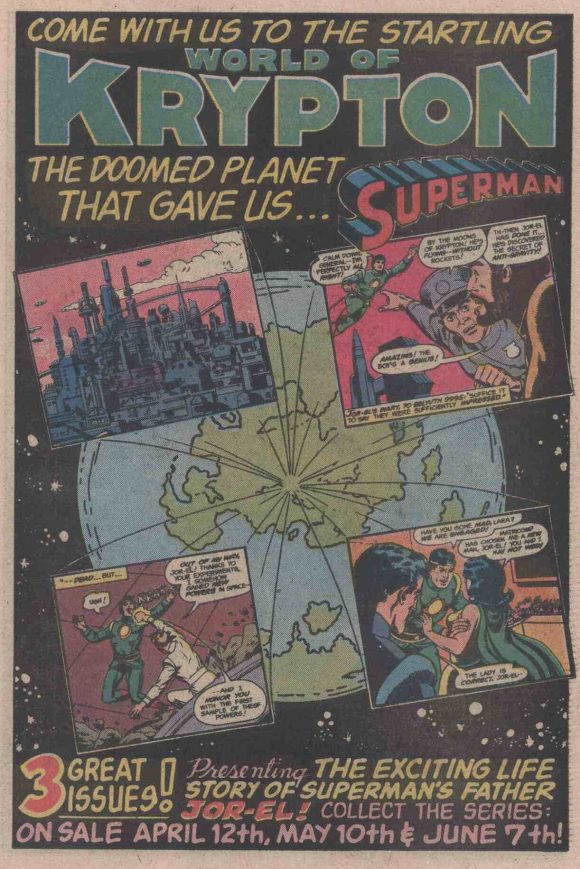 But Showcase was cancelled before the story ran and World of Krypton was stuck in a drawer. Though not for long. Due to contractual problems with original Superman: The Movie screenwriter Mario Puzo, DC wasn’t allowed to publish any tie-ins directly based on the film; that’s why instead of writing a novelization of the movie, Elliot S! Maggin was hired to write an original novel (the highly recommended Superman: Last Son of Krypton). And it’s why instead of a comic book adaptation featuring a Marlon Brando-esque Jor-El, they dusted off World Of Krypton, starring a green tunic-wearing Jor-El, and threw that out there to feed the Superman frenzy. Not that I’m complaining.

The Seven Soldiers of Victory (1975). Last ego-boost selection, I swear, but again, there’s some historic significance attached to the advertised storyline. After being resurrected in the 1972 Justice League of America/Justice Society of America annual crossover event, someone found an unpublished 1940s Seven Soldiers script by Joe Samachson in an old file and DC decided to publish it as a serial in Adventure Comics #438-443 (March/April 1975-January/February 1976). The individual chapters were assigned to writers for a light (uncredited) polish and to bring them up to date; I polished Chapter 6, “Gnome Man’s Land” in #442, featuring (the Western, Greg Saunders) Vigilante, which was drawn by Jose Luis Garcia-Lopez; other artists on the project were Dick Dillin, Howard Chaykin, Lee Elias, Mike Grell and Ernie Chan. 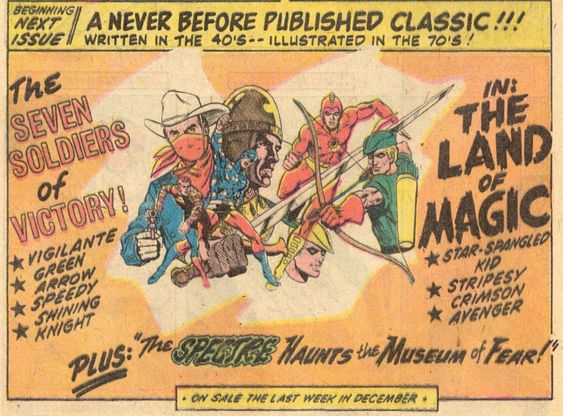 Superman Family #182 and House of Mystery #251: DC Dollar Comics (1976). Crap. I lied… but can I help it if my newbie little comics career (I sold my first stories to Charlton and DC in 1975) kept intersecting with comics history? DC put considerable effort into experimenting with formats in the 1970s, beginning a few years before this with the big 100-Page Super Spectaculars. The 80-Page Dollar Comic was, as I recall, expected to be a game changer for the company (the higher cover price meant higher profits for retailers, hence more incentive to give them greater prominence on the racks), and Superman Family #182 and House of Mystery #251 led the charge, soon to be followed by World’s Finest and G.I. Combat. Big news about some big comic books… and DC even did the math for us (“Like getting 4 comics for the price of 3!”). 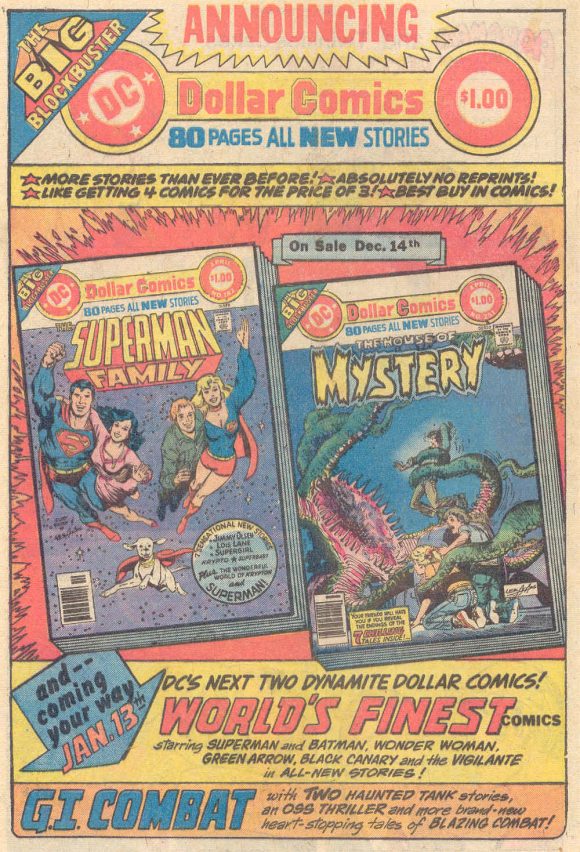 I do know that these books of “80 Pages All New Stories!” were a gift to beginning creators like myself, creating a need for a lot of new material. My first sale to DC (the cover blurbed “Wonderful World of Krypton” story, with art by Marshall Rogers and Frank Springer), appeared in that issue of Superman Family, and I was the semi-regular writer of the little five-page introductory/interstitial/afterword stories starring Cain and Abel that opened every issue of House of Mystery.

DC Blue Ribbon Digest (1979). While we’re on the subject of formats, DC didn’t ignore its line of digest comics, tidy little packages featuring 100 pages of reprints for under a buck, with everything from Superman and Batman to Jonah Hex and Sugar and Spike. There would be almost 100 of these published during its lifetime. 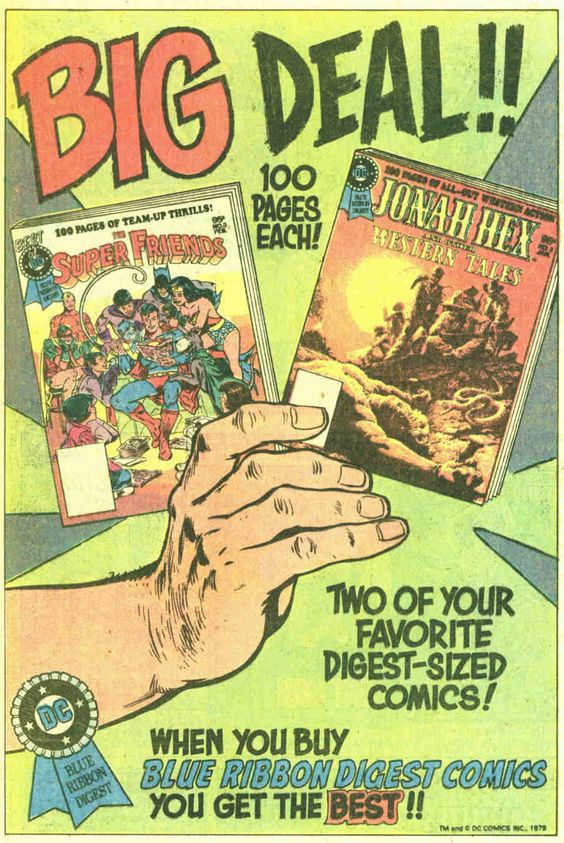 February Is the Second Month (1977). A lot of math in this one, but it just goes to further show you that DC was on the move in 1977 and was pushing a lot of new projects all at once: Tony Isabella and Trevor Von Eeden’s Black Lightning and Michael Fleisher and Tony DeZuniga’s Jonah Hex were significant to be sure, but there was also a lot riding on the Dollar Comics format. It shows that you don’t need much of a connection between superhero, Western and horror comics beyond it being second issues for all. 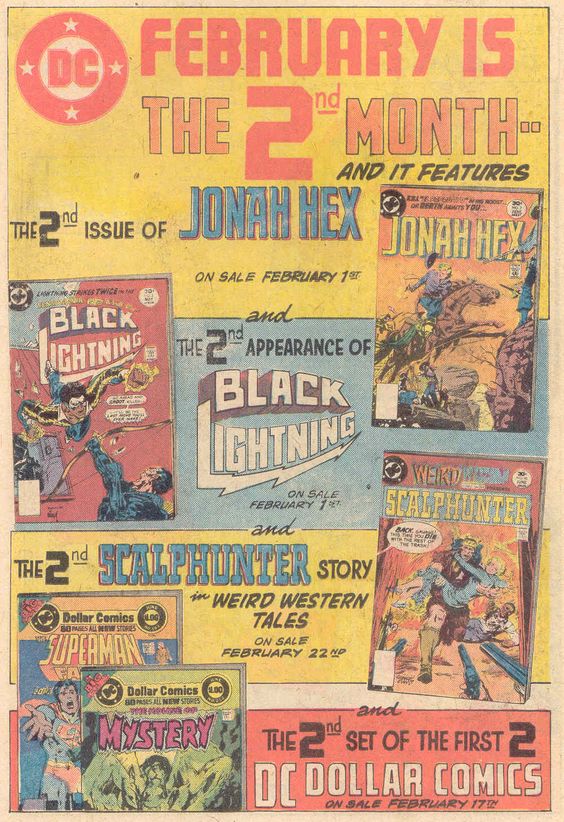 The DC Explosion! (1978). The road to Hell is paved with good intentions — and as with the “Explosion,” DC’s big move against the expanding newsstand dominance of rival Marvel Comics — sometimes with ice. The way to maintain maximum presence was by putting out more titles than the other guy so you push them off to the side. 1978’s DC Explosion was just that; a slew of new titles, new and reprint material, to flood the newsstands and drown out Marvel’s books. The only problem was Mother Nature and the global economy had other ideas. (By Todd Klein.) 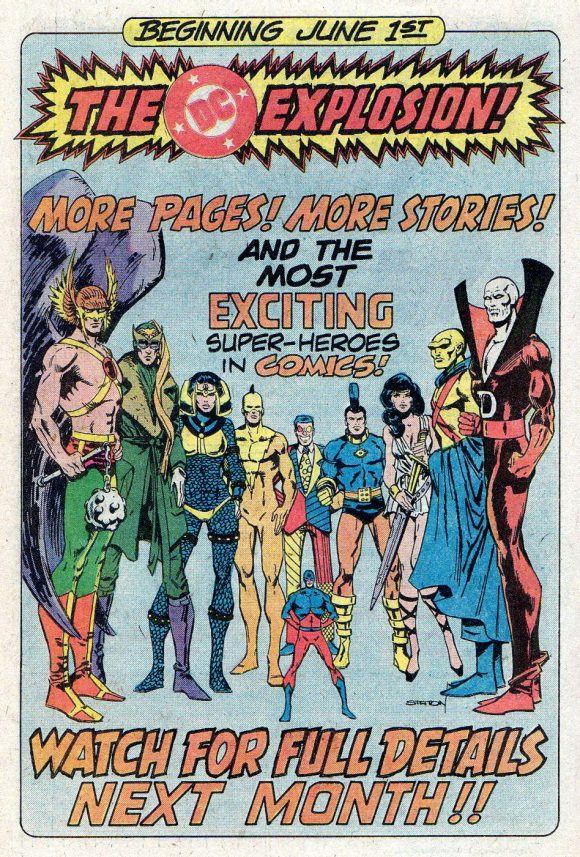 Severe winter weather brought a lot of interstate trucking (the main mode of magazine deliveries) to a frozen, iced-over standstill and the Explosion titles sat undistributed in the warehouse. Add in bad economic conditions and a drastic rise in paper prices and the DC Explosion turned out to be a dud, a mass cancellation that came to be known as the “DC Implosion.” But for a while, at least, we had hope of the bigger and better future promised by this Joe Staton illustrated ad. (My part in the Implosion? I was “laid off” from my staff position as assistant public relations guy and I assembled and oversaw the production and printing of the Xeroxed two-volume Cancelled Comics Cavalcade, which printed the material from the books cancelled by the Implosion.) (NOTE from Dan: Click here for much more on the DC Implosion.)

“This Month… and Every Month” (1978). A piece of post-Implosion advertising, from late 1978, promoting the December cover-dated books, after the dust had a chance to settle a little. DC wasn’t trying to be flashy here. They were keeping it calm and low key, a bit of reassurance to shaken readers that everything was OK! We’re still here! “Twenty standard-sized monthlies”!! “Six dollar-sized bimonthlies”!! See? Everything is under control! Don’t panic! (By Todd Klein.)

“The Thrilling Return of Mister Miracle” (1977). I began the decade of ads with Jack Kirby, so let’s end it on one of the King’s creations as well, even if there is no mention of him in the ad. Jack’s original runs on his Third World titles didn’t last much more than a dozen issues each, with Mister Miracle making it to 18. More than three years later, Scott Free and Big Barda were given another shot, picking up the numbering from the original, under the creative guidance of writer Steve Englehart and artist Marshall Rogers, the team that was simultaneously shaking up things for Batman in Detective Comics. 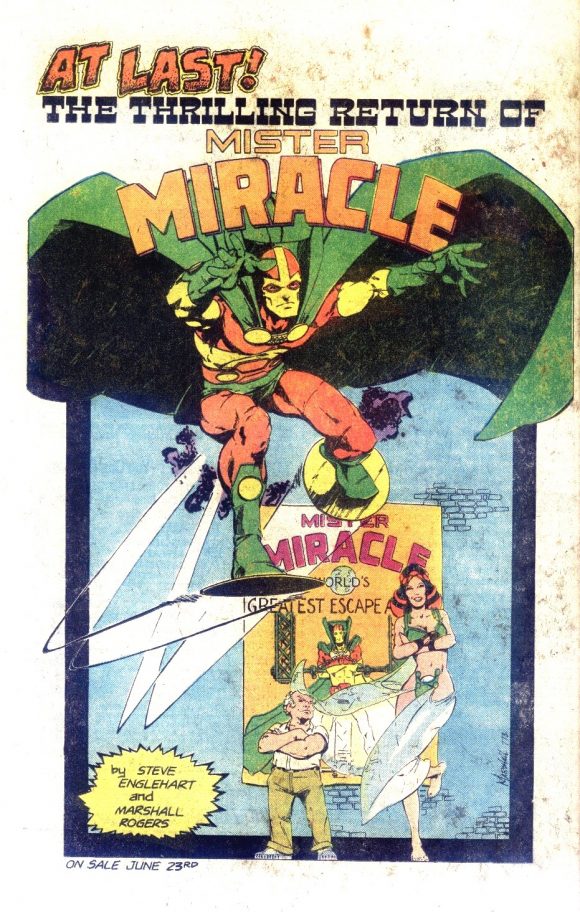