Our mighty columnist picks the tops from column “C”… 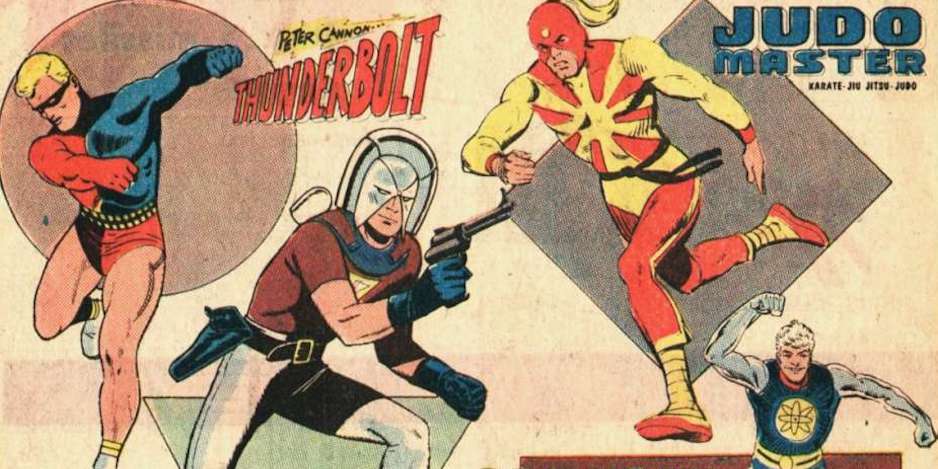 Poor little Charlton Comics (1945 – 1985)! If DC and Marvel were the sirloin steak of comic book publishers, Charlton was a skimpy little Wetson’s hamburger. Their distribution was spotty and uneven. They paid the lowest rates in the business. Their poorly printed and trimmed output were run on the cheapest paper stock available on presses that were barely up to the job.

But for me, at least, these factors weren’t a bug of the Charlton Comics but rather a feature. And despite a fair share of clunker stories by creators who, to put it gently, would have been hard-pressed to find work at other publishers, artists like Steve Ditko, Dick Giordano, Pat Boyette, Pete Morisi, Don Newton and Frank McLaughlin made the 40-year-old Derby, Connecticut, company their creative home for years. 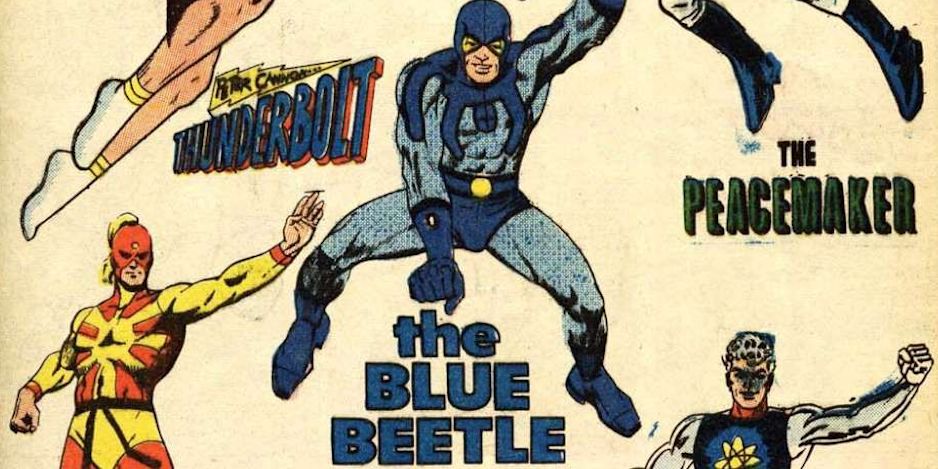 In 1966, on the scalloped tail of Batman’s televised cape, Charlton unleashed a roster of new superhero characters to join its list of genre titles, everything from horror and hot rods to Westerns and war. The characters — including Peter Cannon — Thunderbolt, Peacemaker and Judo Master, joining the pre-existing but Steve Ditko-revamped Blue Beetle and Captain Atom — were cool, but sales were weak, and the “new” Charlton only lasted about a year.

I don’t know who wrote and put them together, but Charlton made good use of their 1960s house ads and they had a distinct style all their own. What strikes me about them today is that they didn’t like to waste the dead space even in the rare ad that spotlighted a single title; an ad for a war title would highlight the issue’s cover but run alongside it the logos of three or four (or more) of their other war books.

Here, in no particular order, are MY 13 FAVORITE 1960s CHARLTON COMICS HOUSE ADS:

“Action-Heroes? We Got ‘Em!!!” (1966). This ad, a montage of stock images and logos of Charlton’s new “action-heroes,” is one of my all-time favorites. I don’t know if it was meant to be snarky, humble, or ironic, but that tagline of “And they’re not half bad!” is either the best or worst ever line used to try to sell comic books. 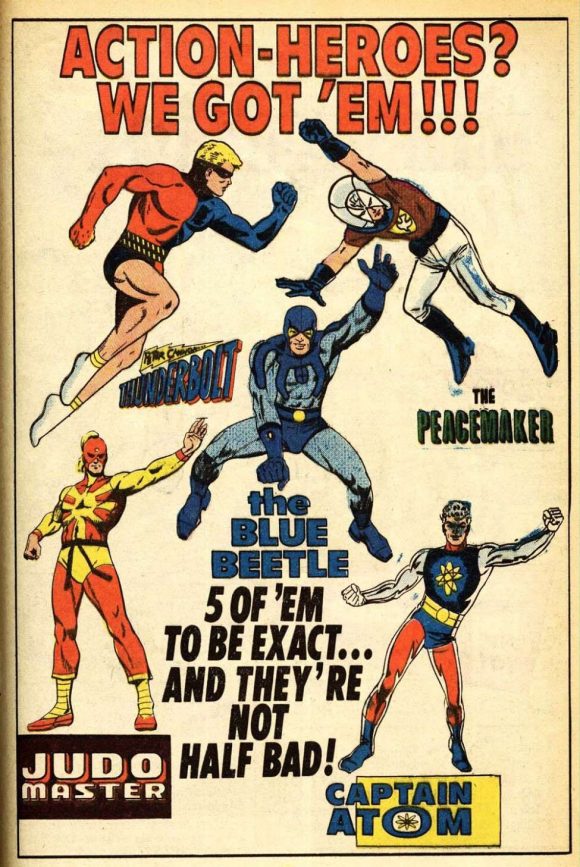 “The Greatest Action-Heroes of All Time” (1965). In contrast, just prior to the introduction of the new Action-Heroes line, Charlton had no hesitation branding their predecessor titles as the greatest of all time. This gang ad for The Fightin’ 5, Son of Vulcan, Blue Beetle, Sarge Steel, and Captain Atom (not shown, except for his logo) packed a lot of promise, all of which would shortly be replaced by the new heroes on the block. The numbering of most of these books would continue, but with new titles, their leads either disappearing (Son of Vulcan and the original version of the Blue Beetle) or being relegated to shorter back-up slots in the newly retitled books. 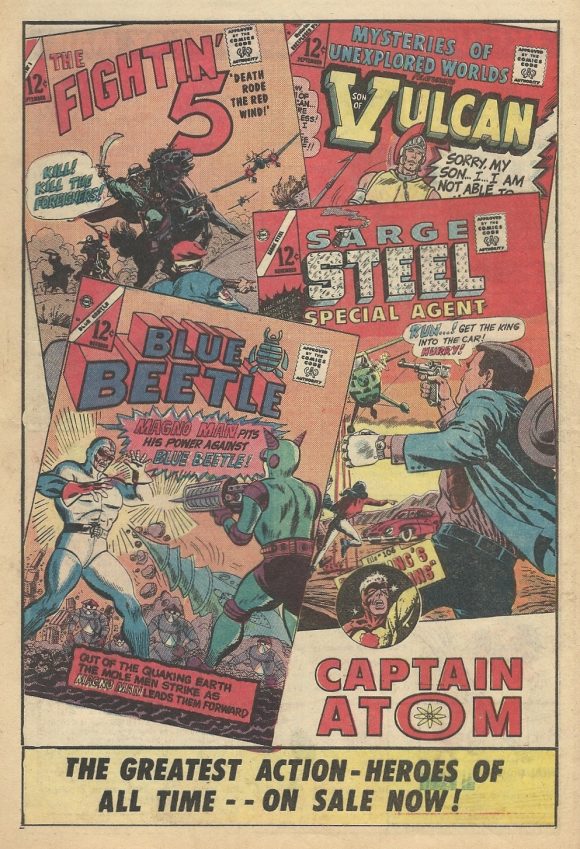 Captain Atom #79/Peter Cannon — Thunderbolt #51 (1966). It didn’t take long for Charlton’s ads to get over their false “not half-bad” modesty and reclaim the self-anointed title of “the greatest heroes of all time” for their “Action-Hero Group” of titles. 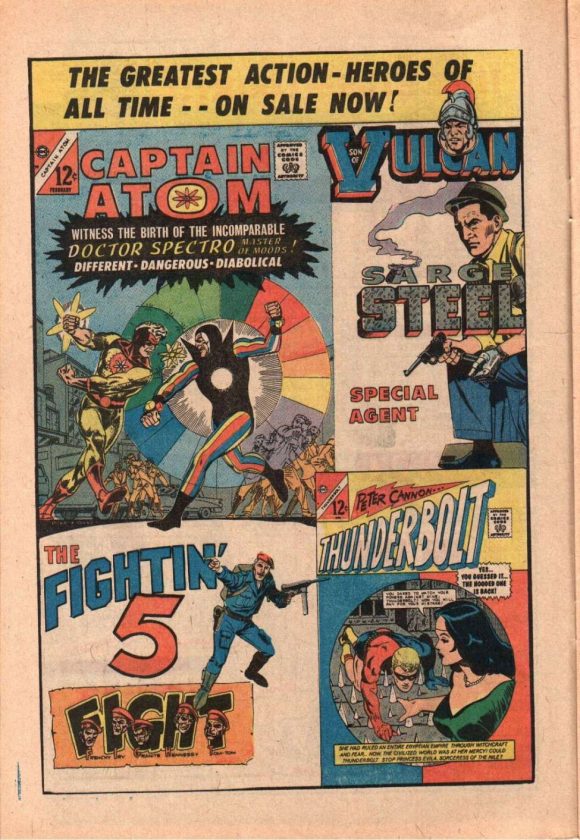 Peter Cannon — Thunderbolt #54/The Fightin’ 5 #40 (1966). Another variation on the “greatest action-heroes” theme. Readers were starting to believe them. 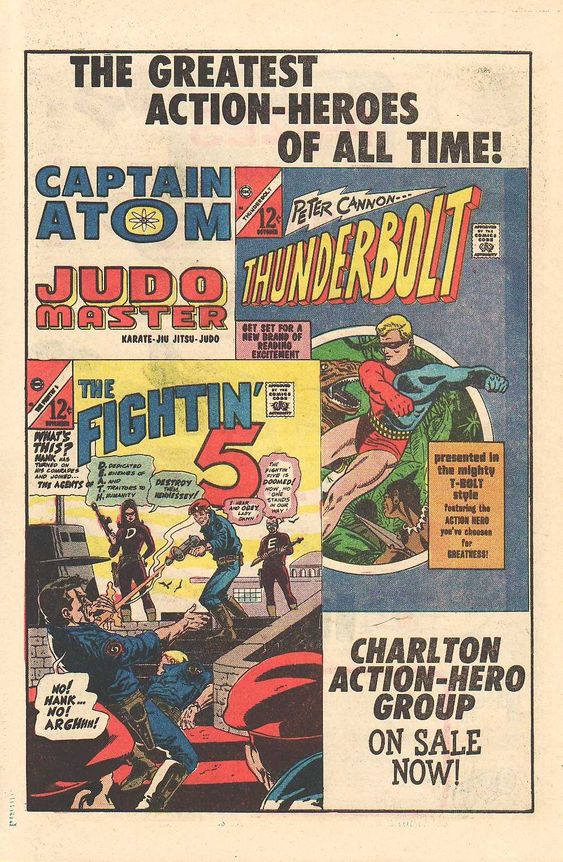 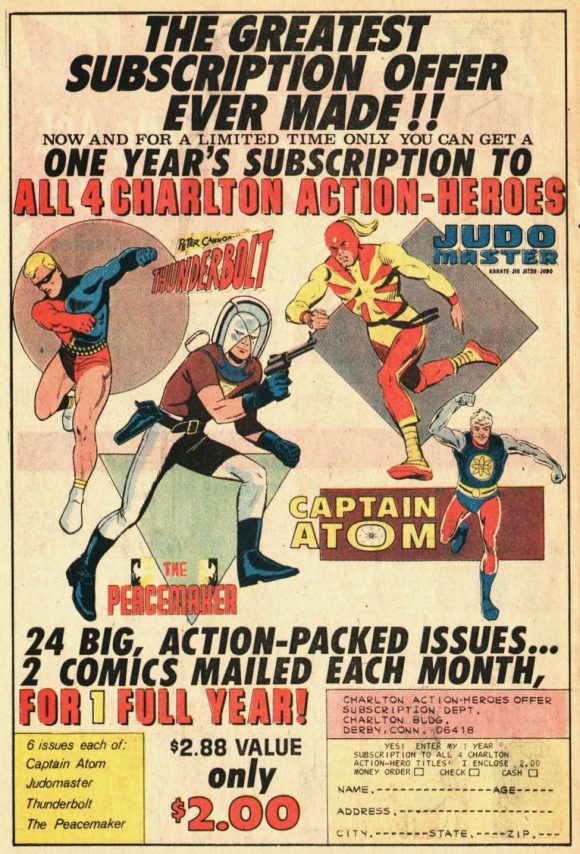 “We Kid You Not” (1966). “I kid you not” was the catchphrase of comedian and (pre-Johnny Carson, pre-Jay Leno, pre-Conan O’Brien, pre-Jay Leno again, pre-Jimmy Fallon) Tonight Show host Jack Paar. It was used to convey sincerity (Mr. Paar was a very sincere man), and Charlton sincerely hoped readers would be interested in at least one of the half dozen of the various titles it displayed, everything from Action-Heroes to horror to Go-Go, the hip and groovy comic mag for the “in” crowd. 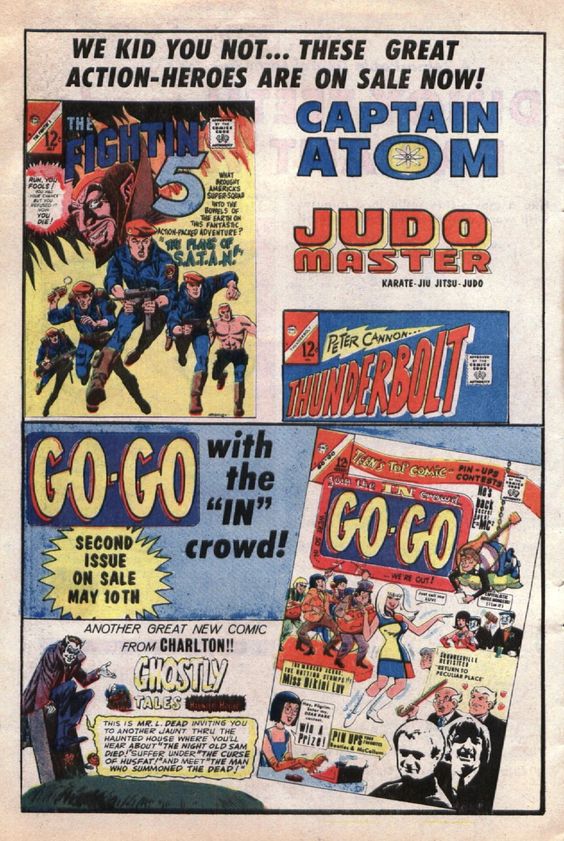 Hot-Rod Comics (1966). Believe it or not, not only did Charlton publish racing, or “hot-rod” comics, they had a “Hot-Rod Group” that included such titles as Grand Prix, Hot Rod Racers, Hot Rods and Racing Cars, Teenage Hotrodders, Drag ‘n’ Wheels, Surf ‘n’ Wheels and World of Wheels. A lot of them were scripted by the talented Jack Keller, better known for his long run on Marvel’s Kid Colt, Outlaw. 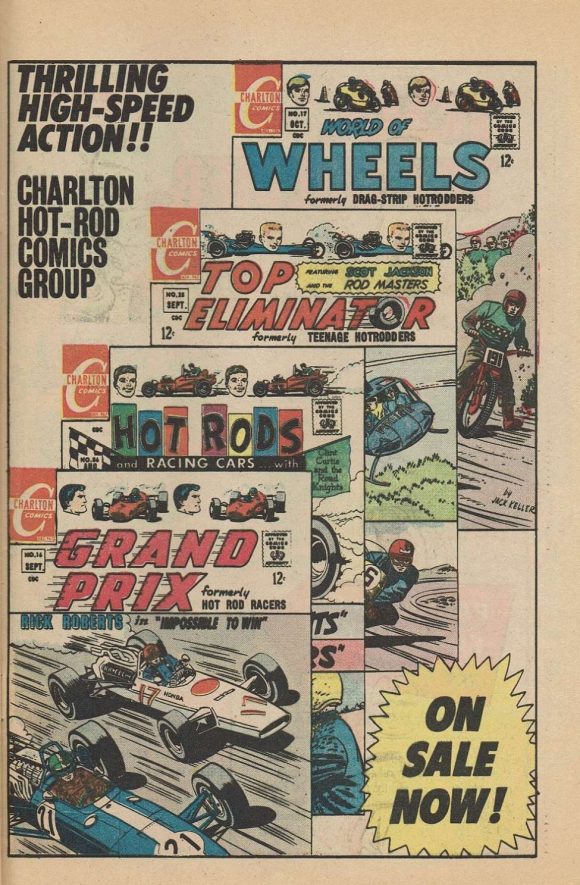 “True-to-Life Stories of Love and Romance!” (1967). Another genre Charlton excelled at and held onto long after all the other publishers had abandoned it, was romance. From Teen-Age Confidential Confessions to Brides in Love and Just Married to My Secret Life and Secret Romances (see also Paul Kupperberg’s Secret Romances), Charlton had love covered from every angle. Note, please, this ad promotes an impressive eight titles… on sale now! 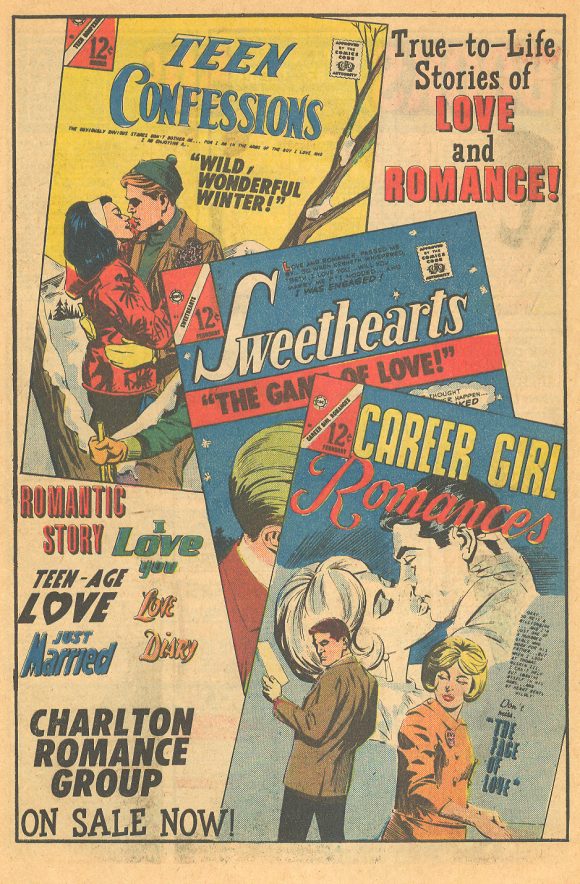 “Heartbeat of Love” (1970). Showing more love, this 1970 house ad always struck me as elegant in its simplicity: a neat little illustration by Charlton romance comics mainstay Tony Abruzzo surrounded by hearts and flourishes and a lot of logos, all in eye-catching yellow and red. 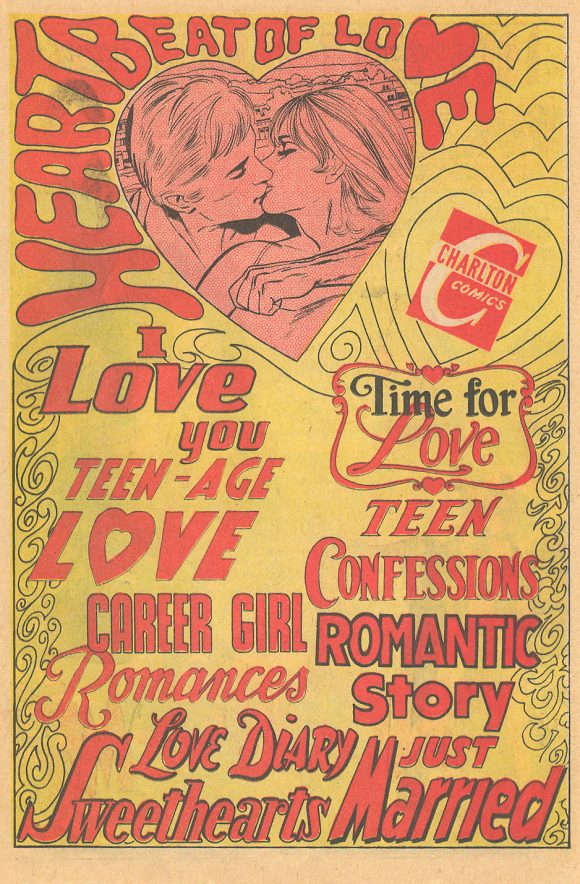 The Many Ghosts of Doctor Graves #6/Ghostly Tales #63 (1967). Whereas I liked how Charlton gave readers a choice between quality horror titles in this ad, I do have to question their choice of tagline: “Look for the Big ‘C’.” What was next? Reminders to readers of romance comics ads to have their annual mammograms? 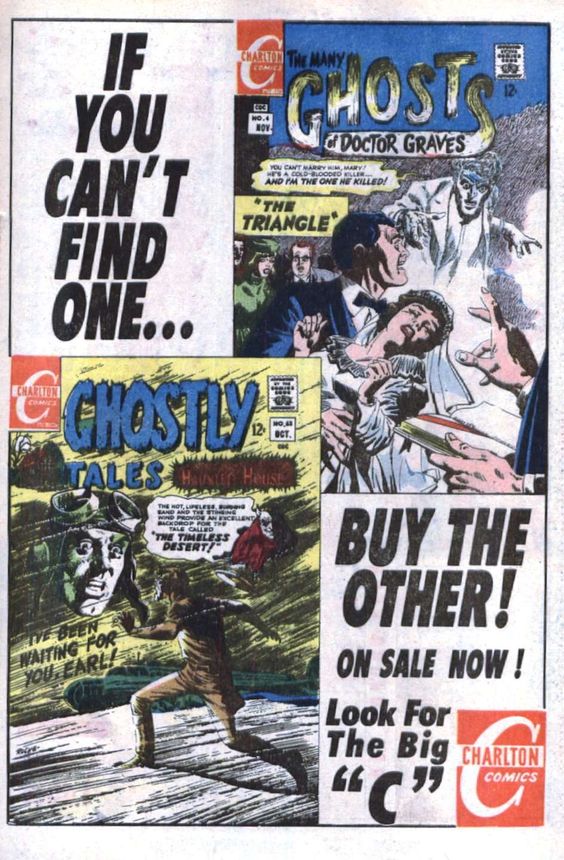 Cheyenne Kid #51 (1965). Another long-running Charlton staple was the Western, usually featuring a title character, like Billy the Kid, Wyatt Earp, Black Fury (a horse), and, of course, the Cheyenne Kid (see also Charlton Wild Frontier #1, with a new Cheyenne Kid story by me and Rick Burchett). For my 12 cents, Charlton’s Western stories, most of them written by the indefatigable Joe Gill, delivered on the promise of being “jam-packed with Western action!” With so many pages to churn out in order to make his $5- or $6-per-page rate pay a living wage, Gill didn’t have time for stories with much depth, but he sure made up for it with the action. 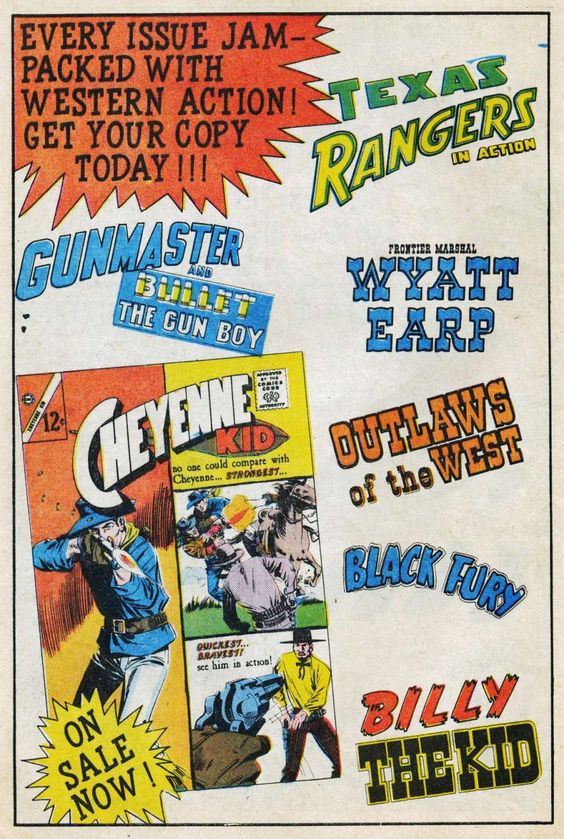 Cheyenne Kid #59 (1966). A year later, Black Fury had gone to that big corral beyond the newsstand, but Cheyenne Kid was still copping the spotlight in this “Charlton Western Group” combo ad, the other titles maintaining their logo-only status. 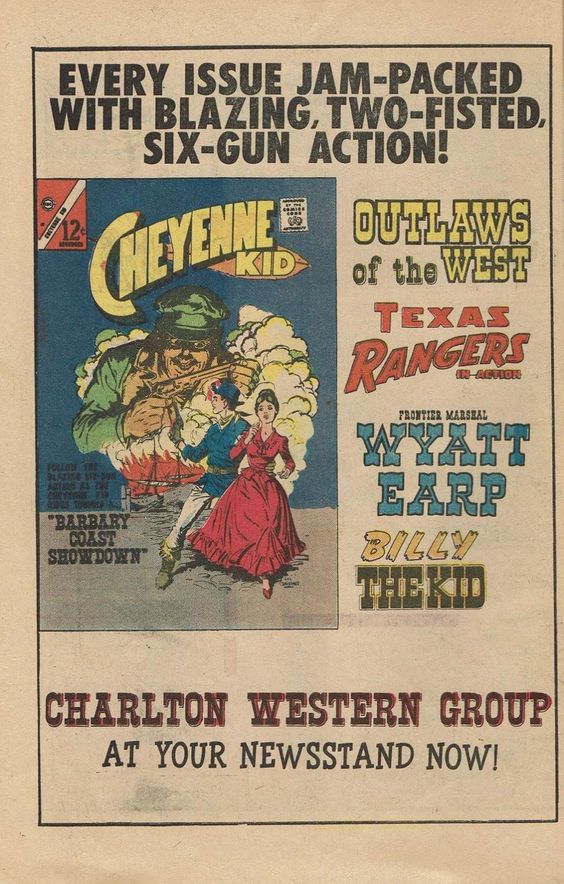 Army War Heroes #19 (1967). Next up, Charlton’s “War Group” showcased its “Exciting war stories of frontline combat action!” Once again, it was Joe Gill behind the keyboard for the majority of these stories so what they lacked in depth (and, sometimes, plot) they made up for in action. 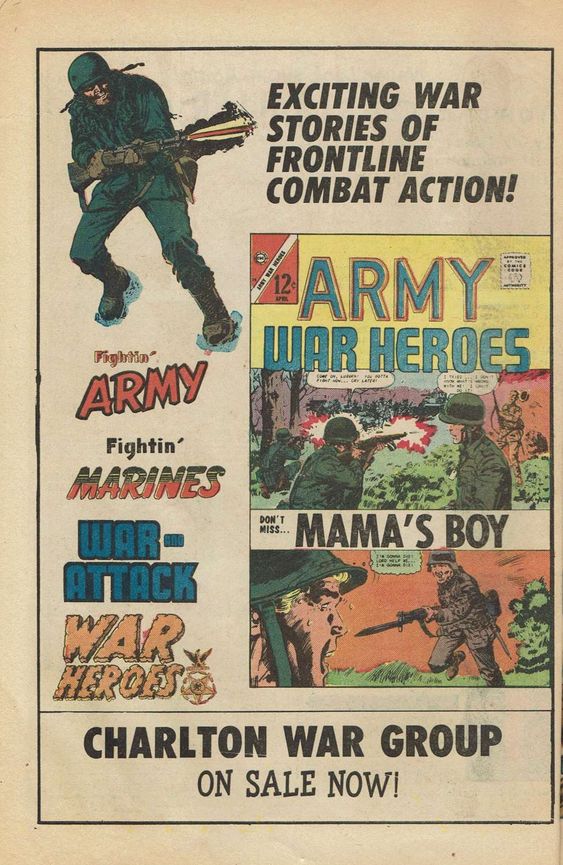