One on One: Storytelling With Nick Bertozzi, By SETH KUSHNER

Home » RANDOM STUFF » One on One: Storytelling With Nick Bertozzi, By SETH KUSHNER

In the latest in our One on One series, writer-photographer Seth Kushner discusses cartooning with his artistic collaborator, Nick Bertozzi. 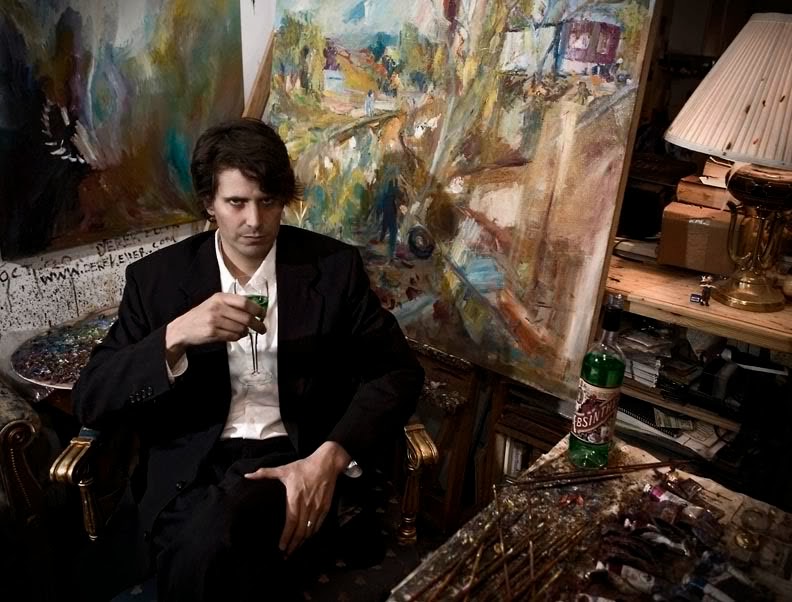 Nick Bertozzi is a cartoonist’s cartoonist: an award-winning and critically acclaimed artist respected by his peers for his storytelling abilities, versatile art style and work ethic. I first encountered this affable and vertically gifted creator’s work through his 2007 graphic novel, “The Salon”, a murder mystery set in 1907 Paris and featuring Picasso. The premise of the book inspired my portrait of Nick for my book, “Leaping Tall Buildings: The Origins of American Comics,” posed in an art studio and holding a bottle of Absinth (see above).

In 2011, I sat across from Nick at the original incarnation of Hang Dai Studios, in Brooklyn.  Since Nick and I were the only members of the studio (which included Dean Haspiel, Gregory Benton and others) with children, we would always arrive early in the morning, hours before anyone else. It was during those early mornings when Nick and I would drink coffee and talk about comics and publishing and storytelling. Of course, sometimes we simply gossiped like teenage girls. Sigh, I miss that old studio. 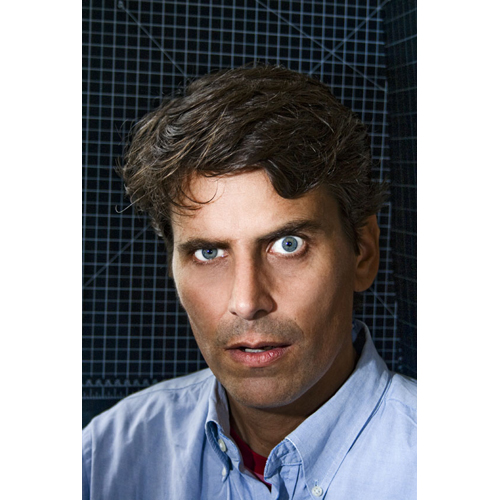 Recently, I had the opportunity to work with Nick when I asked him to draw an installment of my ongoing semi-autobio webcomic series, Schmuck. After he read the script and agreed to the draw it, he sent me thoughtful notes, which forced me to think about story in a more 360 way, which made my script that much better. Then, when I got the art back and saw how Nick adapted my script, I was astonished at how he broke down the story for maximum impact. I love the choices he made with the panel arrangement and design and his colors added mood and tone. Working with him gave me even more of an appreciation for the work of my favorite cartoonist.

Last week, I sat down with Nick for a chat about comics. 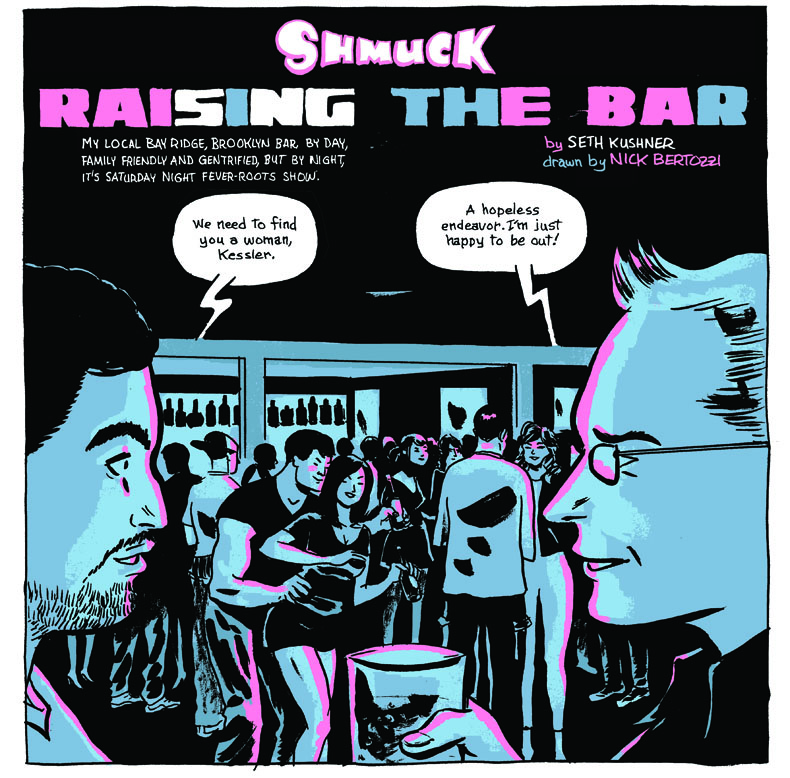 Seth Kushner: Working with you recently on my Schmuck comic gave me an insider’s view of your methods. It impresses me how you’re completely driven by the need to serve the story above all else. It seems many of today’s up-and-coming indie cartoonists seem to value style above story, and it makes me wonder: Where did you first learn about the importance of story?

Nick Bertozzi: The desire to be new and original is riven into young American artists and it’s very hard to accept that you’re part of a long river of art, that your work is informed by and constructed on top of the artists that went before you. Teaching at School of Visual Arts made that idea plain to me. I was forced to argue my beliefs about comics and teaching. Colleague and fantastic cartoonist, Tom Hart, gave me his syllabus to work from. It was filled with links to story-making advice, from Aristotle’s poetics to Disney’s Do’s and Don’ts to Lynda Barry’s method of looking through her past to find good stories. 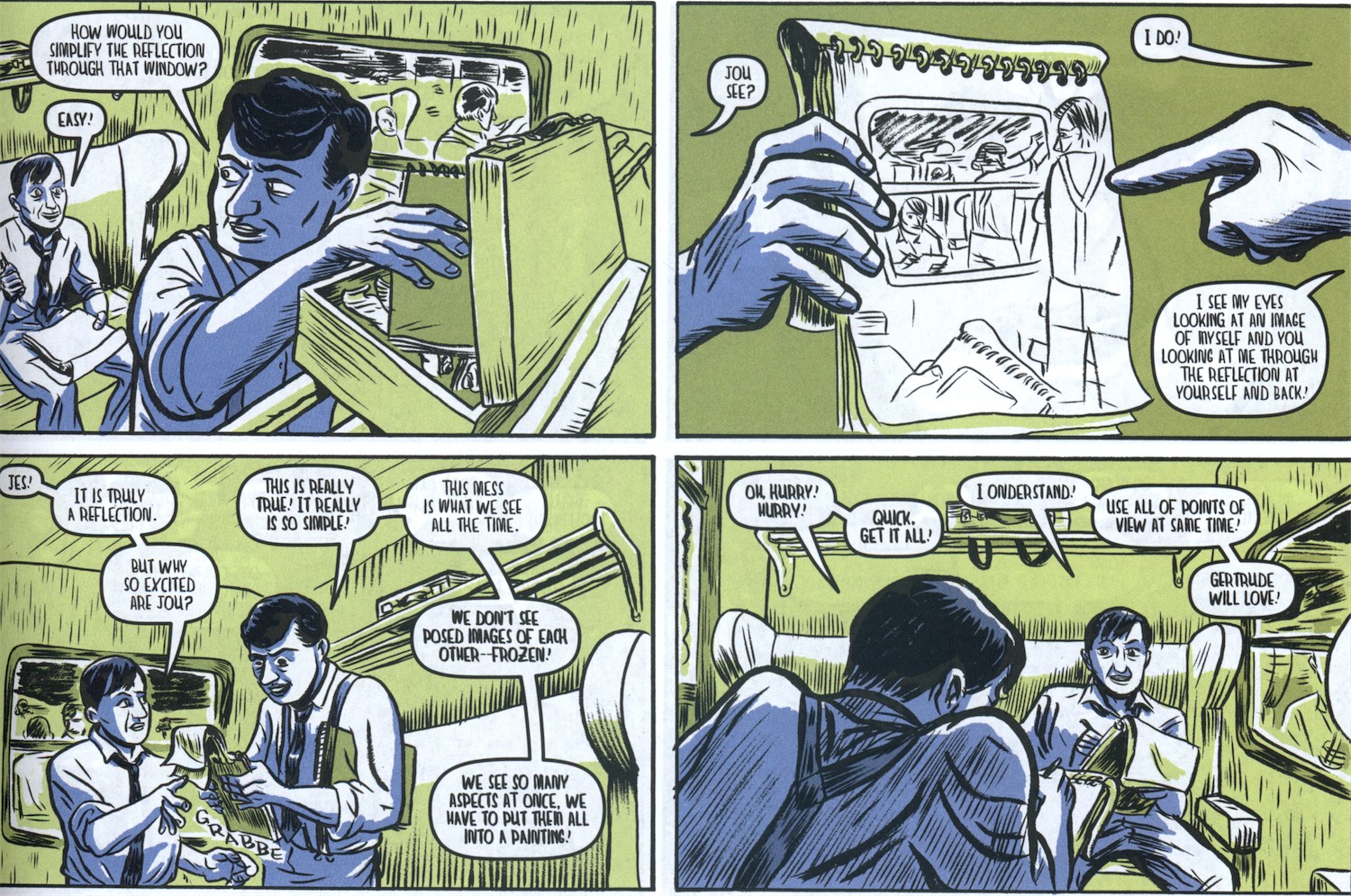 Also, Dean Haspiel had given me David Mamet’s book, “On Directing Film,” and from that I took two useful questions for cartoonists interested in creating drama: 1. What does my protagonist want? 2. What stops my protagonists from getting what they want?

When I was working on “The Salon,” I was having trouble figuring out an ending, so the book from Dean and the teaching at SVA couldn’t have come at a better time. 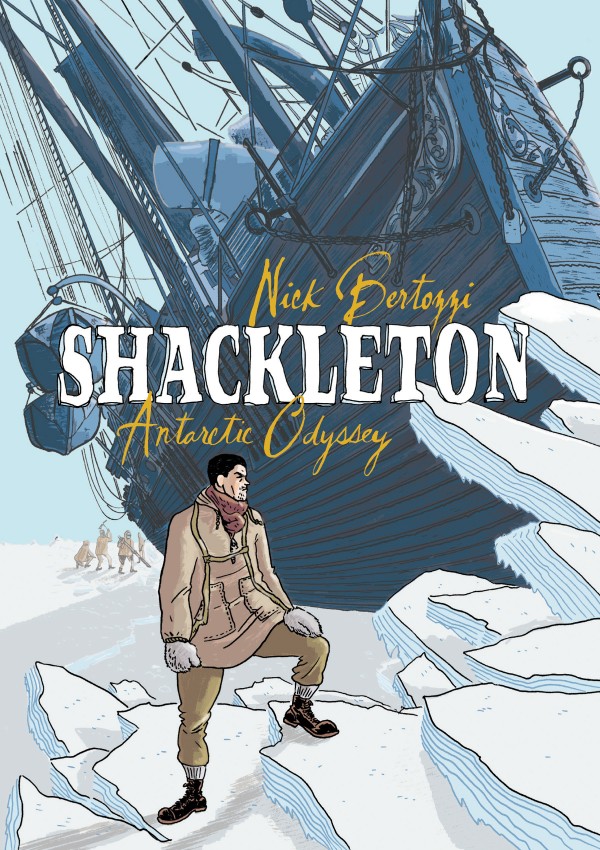 While there is a recognizable Bertozzi aesthetic, there perhaps is not a recognizable Bertozzi style. You said you channeled Alex Toth for our collaboration, and in the pages you recently showed me from your upcoming book, “Shackleton: Antarctic Odyssey,” you seemed to have taken an almost Hergé/Tin Tin approach. How do decide upon your artistic approach for each project?

I am embarrassed by my drawing. Whenever I start a new project I find an artist who has a strong style with elements I want to learn and do my best to incorporate ideas from their style into the piece I’m working on. Each little step has made me more confident about my work. As for the Hergé influence on the Shackleton piece, that was not my intention – I was looking at Tezuka if you can believe it – but I see the Tintinisms now! Thanks, Seth … 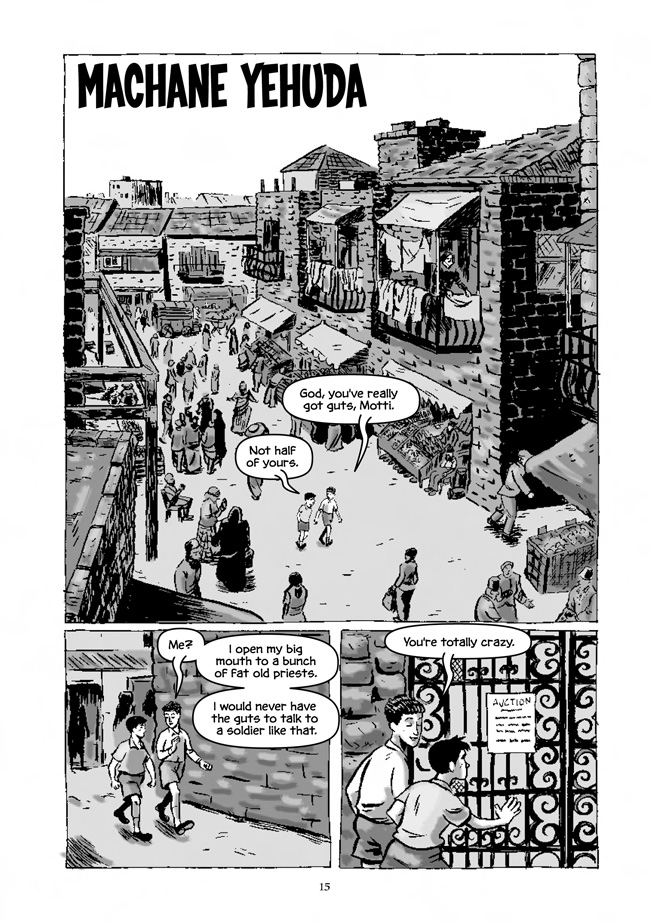 Boaz pushed me to move further away from/much closer to the subject. And very importantly, he made sure I made the emotions obvious on the characters’ faces. For years I’ve drawn characters’ emotions very subtly, but people read comics far too quickly to pick up on that. I think you can achieve subtlety, but you have to draw a lot more panels or simplify your style like Chris Ware. 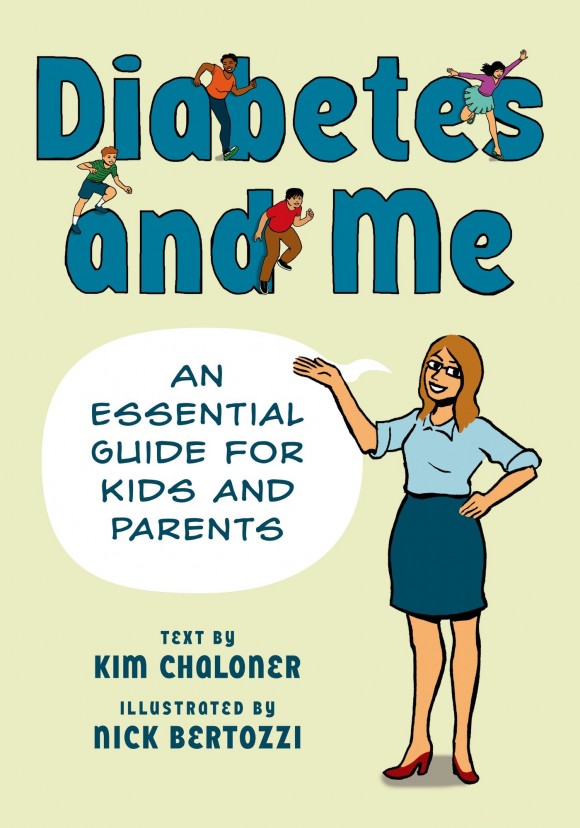 What about working with your wife, Kim Chaloner on new book, “Diabetes and Me: An Essential Guide for Kids and Parents“?

It’s a guidebook and comics at the same time so it was a good challenge to learn how to make clear diagrams. Also, the drawing is unusual for me since I didn’t have much time to overthink it. I drew the book very, very fast to meet the publisher’s deadline (we all wanted it out for World Diabetes Day — Nov. 13 — and I think in this case that was beneficial. The art looks loose and friendly. I hope it’ll make it a more enjoyable and warm experience for the kids who are reading it. They’ll be dealing with enough crap than to have to wade through a stiff, boring book. 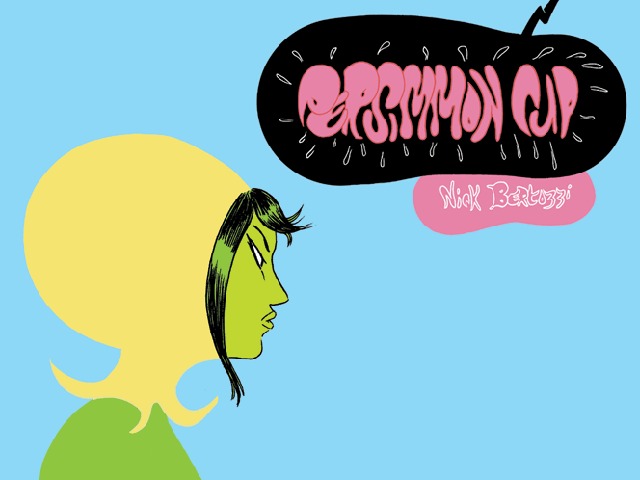 Your Persimmon Cup collection was just successfully funded on Kickstarter. Congrats! Why was this project the ideal one for you to crowdfund?

After 10 years of collaborating and being edited I really wanted to make a book exactly the way I wanted. Also, people would stop me at cons or write me notes to tell me that this is my best art. There’s no reason to tinker with it, just put it out there. 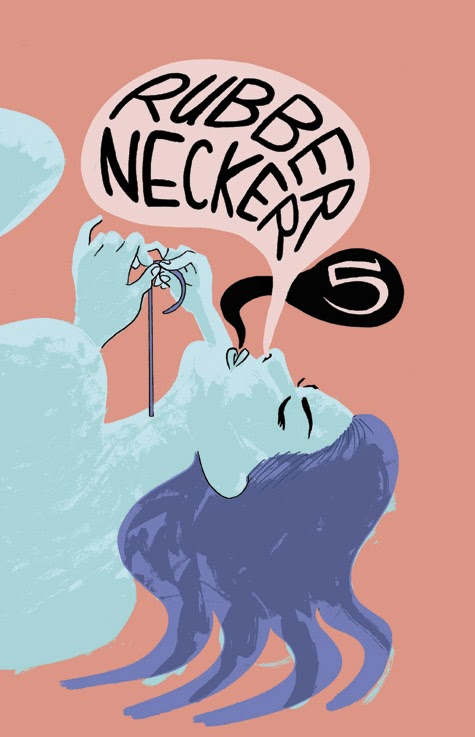 The new Rubber Necker is great! It’s been a while since you’ve self-published. What brought you back to it now?

Michel Fiffe’s Copra brought me back. I love that book and was inspired.

By the content, or the work ethic involved.  Or, both?

Both, but also I never meant to be away from Rubber Necker for 10 years, I just got caught up in making long books and I really miss the reaction I used to get from making a couple comics a year. It’s just not the same with webcomics.

“Shackleton” comes out in June, right?  What’s next for you after that?

“Persimmon Cup” should be out in April as well as Rubber Necker #6 (hopefully!) and I’m pitching some historical graphic novels around but I can’t say too much about that at this point!

“Diabetes and Me: An Essential Guide for Kids and Parents,” text by Kim Chaloner and illustrated by Nick Bertozzi, is available now. Rubber Necker #5 is available for purchase by PayPal and can be ordered directly from Nick by emailing him at nicholasbertozzi@gmail.com.