Adams flips the script on one of his most famous covers. 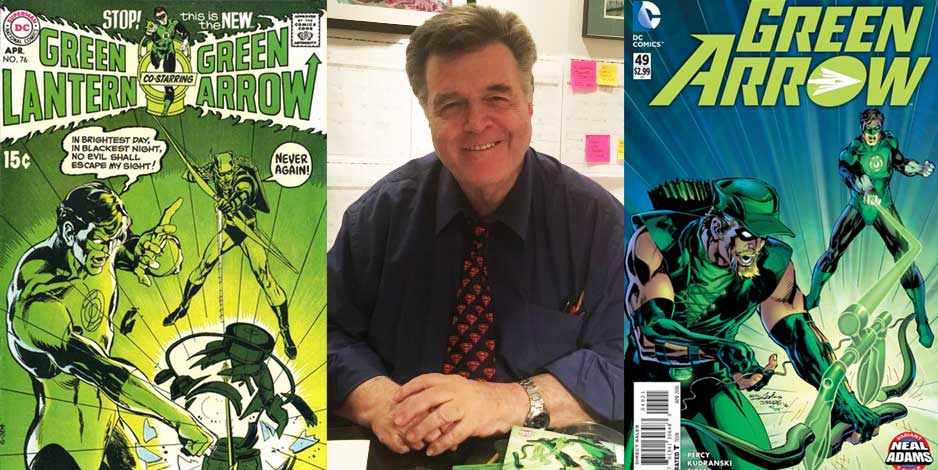 Or maybe it’s his most famous, if you can quantify such things. Regardless, it’s the one that DC’s co-publisher grabbed for himself.

Let me back up: It’s NEAL ADAMS MONTH here at 13th Dimension, and we’re featuring daily commentary by Adams on his variant-cover project for DC Comics. Each of his 27 variants is a twist on one of his famous covers from the past. He provided the pencils, and the inks and colors were handled by some of the biggest names in the business like Frank Miller and Walt Simonson. 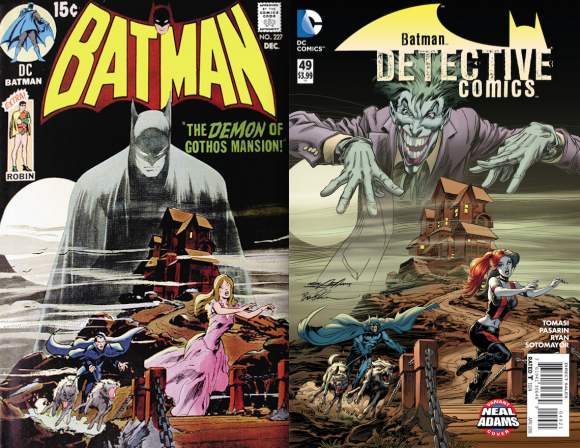 Today, Adams talks about the cover that launched an era of social relevance in mainstream comic books — Green Lantern #76 — and the modernized version for Green Arrow #49, which goes on sale 2/3 : 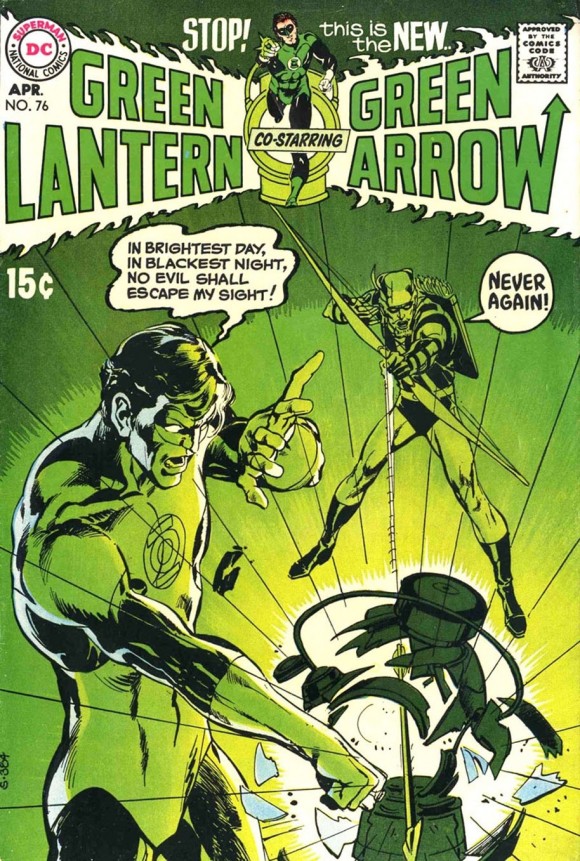 Dan Greenfield: This is Green Arrow #49, based, of course, on your Green Lantern/Green Arrow #76, which is probably your most famous cover that’s not Batman. One of them, anyway: 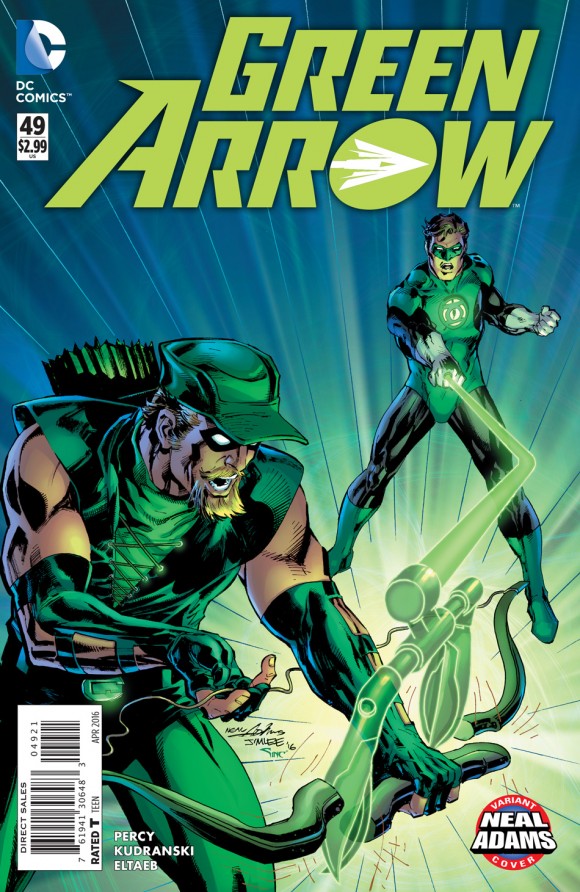 Pencils by Adams. Inks by Lee. Colors by Alex Sinclair.

Neal Adams: You may be interested to know, parenthetically, that the original for that cover just sold at auction for $442,000. 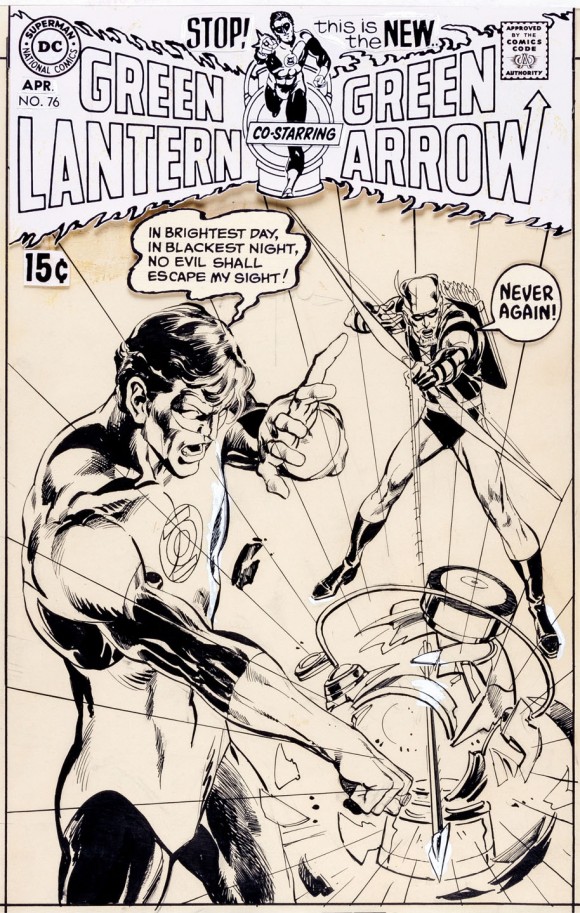 But anyway, I guess Jim Lee must have put his name in the hat (to do) this one.

Dan: (Laughs) In the hat! The co-publisher! I would guess he probably was at the front of the line.

Neal: I would say. I would say. So he got to do this thing, and I think he did a great job. A really fabulous job.

I didn’t actually think, “What am I gonna do with this?” … I didn’t wanna put another character in. I just switched the characters, which I think was a terrific idea. ‘Cause it could have been the original cover. You keep the conflict between the two characters. That conflict is SO famous! 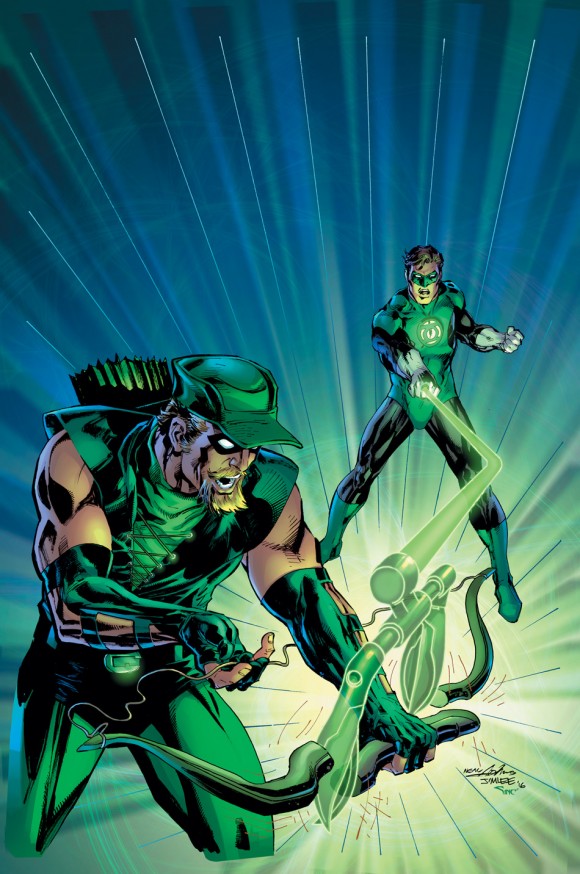 Dan: I like that you kept the original costumes for these, too.

Dan: It’s your design for Green Arrow… although I don’t see the feather in the hat.

Dan: But the Green Lantern outfit is not that armored version. It’s the classic. My favorite one.

Neal: Yeah. I’ll tell you what I did do. This was sort of a suggestion. There’s always these underlying motives, which I feel guilty about but I do have ’em. You know there’s the Arrow show.

Neal: Which I call The Neal Adams Show. So many things in the show relate to what (writer) Denny (O’Neil) and I did. And they know it, big time. You know. They talk about the sword fight between Batman and Ra’s Al Ghul in the desert. Except they (Arrow and Ra’s) weren’t in the desert, so they do it on the mountain. And why do they have their shirts off and why are they fighting with swords? Hello? 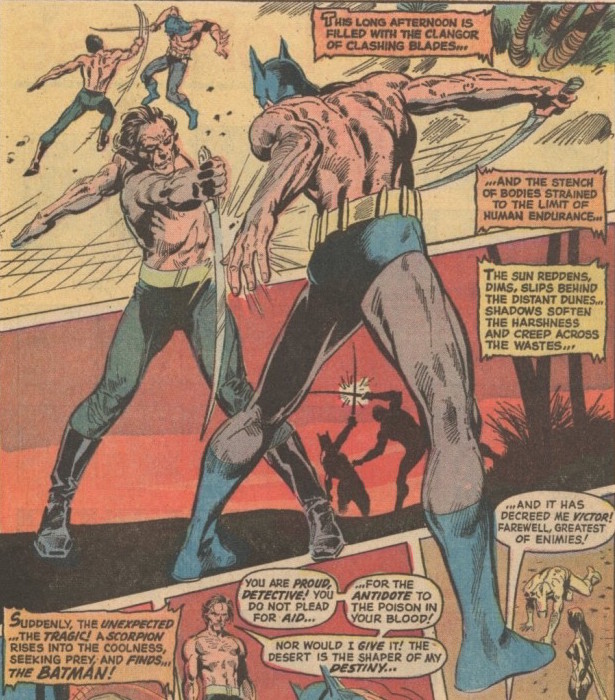 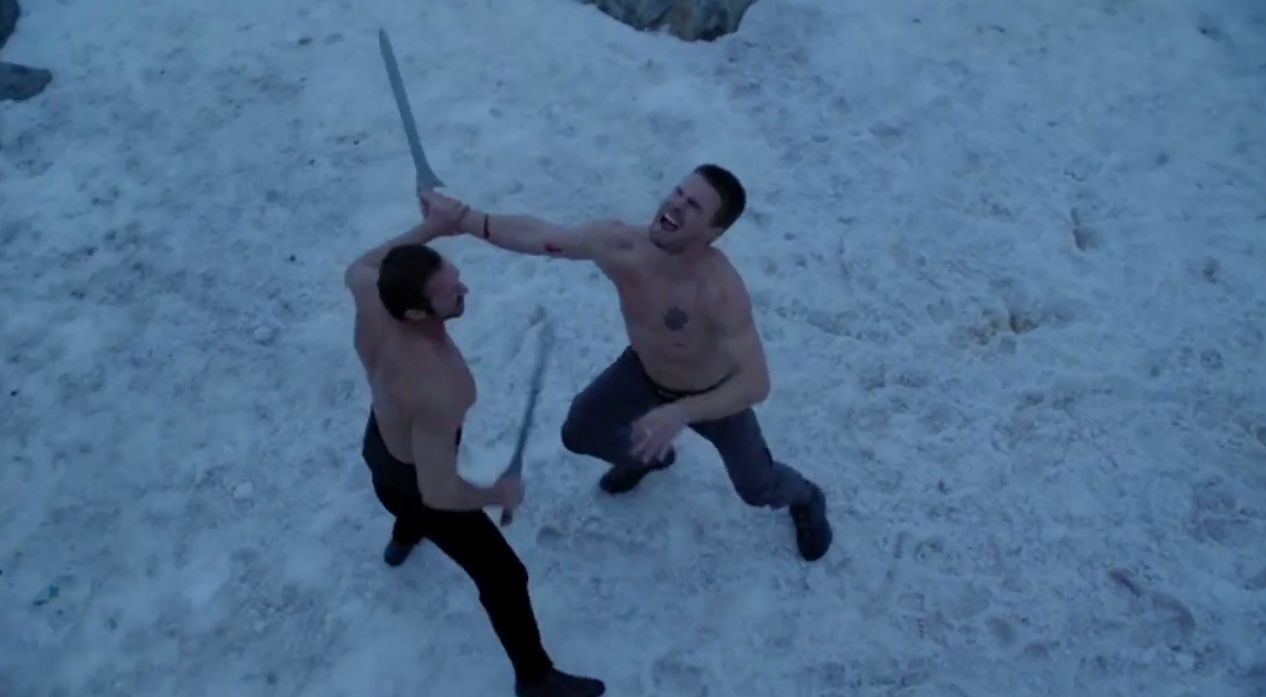 So…those guys, after the first season—the writers of the show—came up to my table in San Diego and introduced themselves. There were three of them. One’s the head writer and then two others. … So then they asked, after a few moments, what did I think of the show. So I said, “OK, so you want me to lie to you, right, and tell you that I love it?” They said, “No, no! We really want you to tell us what you think!” (Laughs) I said, “No, you want me to lie. For me to tell you I LOOOOVE it.” 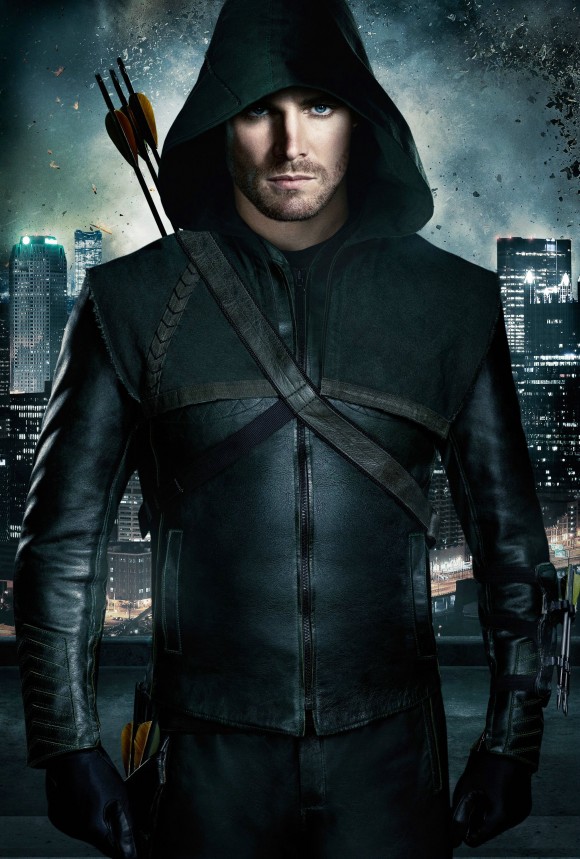 They said, “Well…do you LIKE it?” I said, “I DO like it.” They said, “Do you have any (suggestions)?” and I said, “Well… I really don’t think the concept is that Green Arrow pulls his bow back and shoots an arrow into the chest and kills somebody with it. Because you see, that’s the whole idea behind Green Arrow. His arrows are kind of trick arrows. None of them really have killing points, OK? And if they do, they pin ya to the wall. … They said, “Hold on. Wait. Second season. He’s not gonna kill anybody.” I said, “Really? REALLY? You’re gonna go by the Code, eh?” (Dan and Neal laugh.)

Actually, lately, he’s been showing up with a little bit of a smile every once in a while, y’know? Anyway, so the other thing is, I said, “I can see that you have to do the hood…even though I think it’s stupid. ‘Cause there’s hoodies, you know? But there is a question in my mind as to whether or not you have to do that.”

They said, “Well, what do you think?”

I said, “Wellll… you know what? My Green Arrow has a kind of a Robin Hood hat. (But) there are German caps that kind of look like that, that you can put on his head so that when he turns his head, he doesn’t actually put his head into the hoodie and not be able to see.” 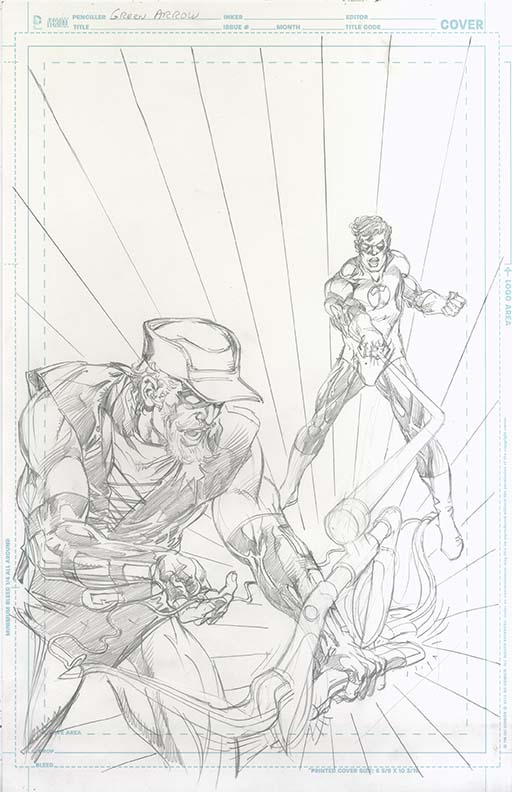 And I mentioned that a couple of times, but you’ll notice on this cover… I’m just sayin’. There are hats that look like that and when you put one of ’em on, it doesn’t look like you’re walking out of the 16th century…