With a new project on the horizon… 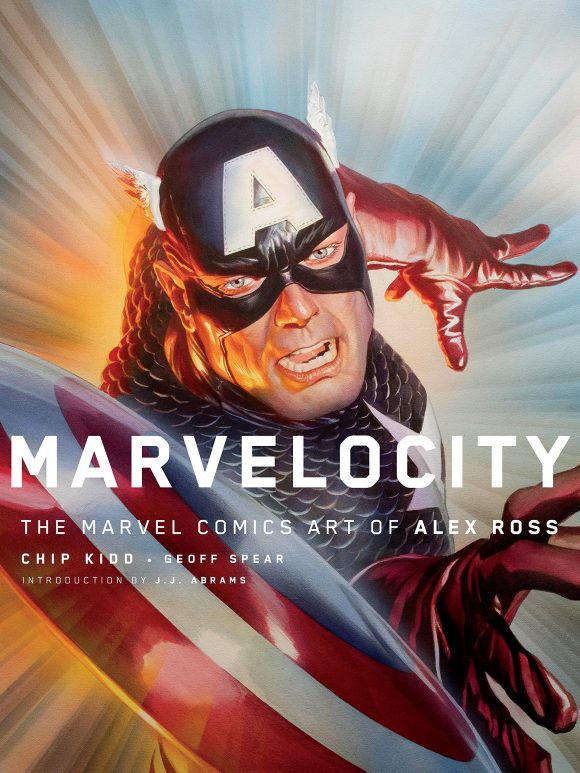 UPDATED 12/13/21: Abrams Comic Arts and Marvel on Monday announced Fantastic Four: Full Circle — the first graphic novel written and illustrated by Alex Ross, and the first collaboration between the publishers as part of a new MarvelArts line. The $24.99 hardcover is due Aug. 2, 2022. According to Abrams, “the book’s large format breaks from the standard graphic novel size to showcase Ross’s art, mirroring the format of the Marvel Graphic Novel, a line of books from the 1980s, and includes a full-color foldout poster featuring an all-new fully painted origin of the Fantastic Four.”

This may all sound familiar to you. That’s because Ross had a Fantastic Four pitch rejected years ago and we broke that story as part of our coverage of the book Marvelocity in October 2018. So we re-present that original story below.

But before we get to that, check out Full Circle’s official description:

“In Fantastic Four: Full Circle, Alex revisits a classic Stan Lee–Jack Kirby comic from the 1960s and introduces the storyline for a new generation of readers,” said his editor, Charles Kochman. 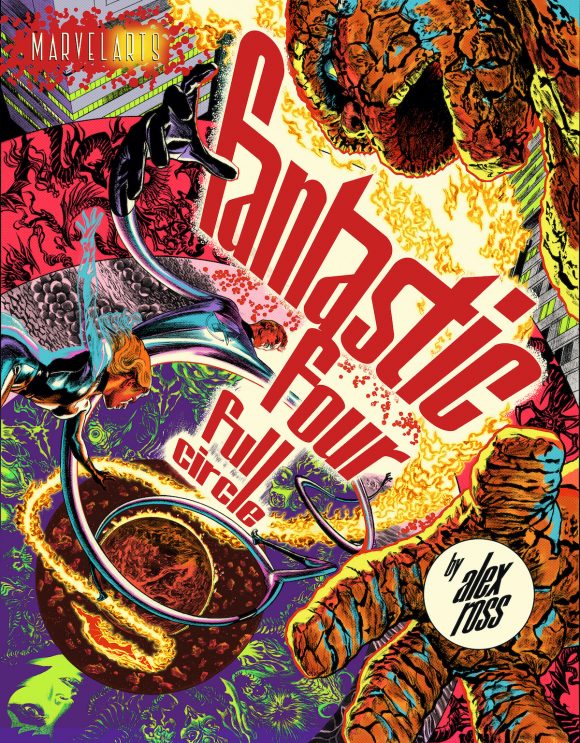 It’s a rainy night in Manhattan, and not a creature is stirring except for . . . Ben Grimm. When an intruder suddenly appears inside the Baxter Building, the Fantastic Four—Mister Fantastic (Reed Richards), the Invisible Woman (Susan Storm Richards), the Human Torch (Johnny Storm), and the Thing (Ben Grimm)—find themselves surrounded by a swarm of invading parasites. These carrion creatures composed of Negative Energy come to Earth using a human host as a delivery system. But for what purpose? And who is behind this untimely invasion?

The Fantastic Four have no choice but to journey into the Negative Zone, an alien universe composed entirely of anti-matter, risking not just their own lives but the fate of the cosmos! “This is the Fantastic Four story I have been wanting to tell for years, and visually it is one of the greatest artistic experiments I have attempted,” Ross said in a statement. “I’m excited to share this work with everyone, as it unites the two great publishing forces of Marvel and Abrams ComicArts in a bold new collaboration.”

Now check out that original pitch…

I don’t know if you’ve picked up Marvelocity yet, but I cannot recommend it highly enough. The coffee-table book, which celebrates the Marvel art of Alex Ross, is hands down the most spectacularly illustrated publication about comics I’ve seen this year.

Hardly a surprise, mind you. This is Alex Ross we’re talking about and the hardcover was produced with one of publishing’s top designers, Chip Kidd, along with first-rate photographer Geoff Spear.

The book, a companion to the beautiful, DC-focused Mythology that came out 15 years ago, is jammed with hundreds of Ross’ covers, prints, sketches and pages – even his designs for the opening credits of Sam Raimi’s Spider-Man 2 and a series of busts based on his photorealistic style of art.

A lot of it you’ve seen before, of course, but it’s all in the presentation, an intoxicating brew of colorful detail that makes you believe there’s a world somewhere in the multiverse that looks exactly how Ross envisions it.

Even more fascinating, naturally, is what you haven’t seen – such as a new Spider-Man story and, startlingly, Ross’ doomed pitch to reboot the Fantastic Four in 2017 while Marvel’s First Family was still on hiatus.

It just goes to show you that even the biggest talents in comics don’t always get what they want – and what Ross wanted was an eye-popping comic that echoed the DayGlo ’60s while offering something fresh. 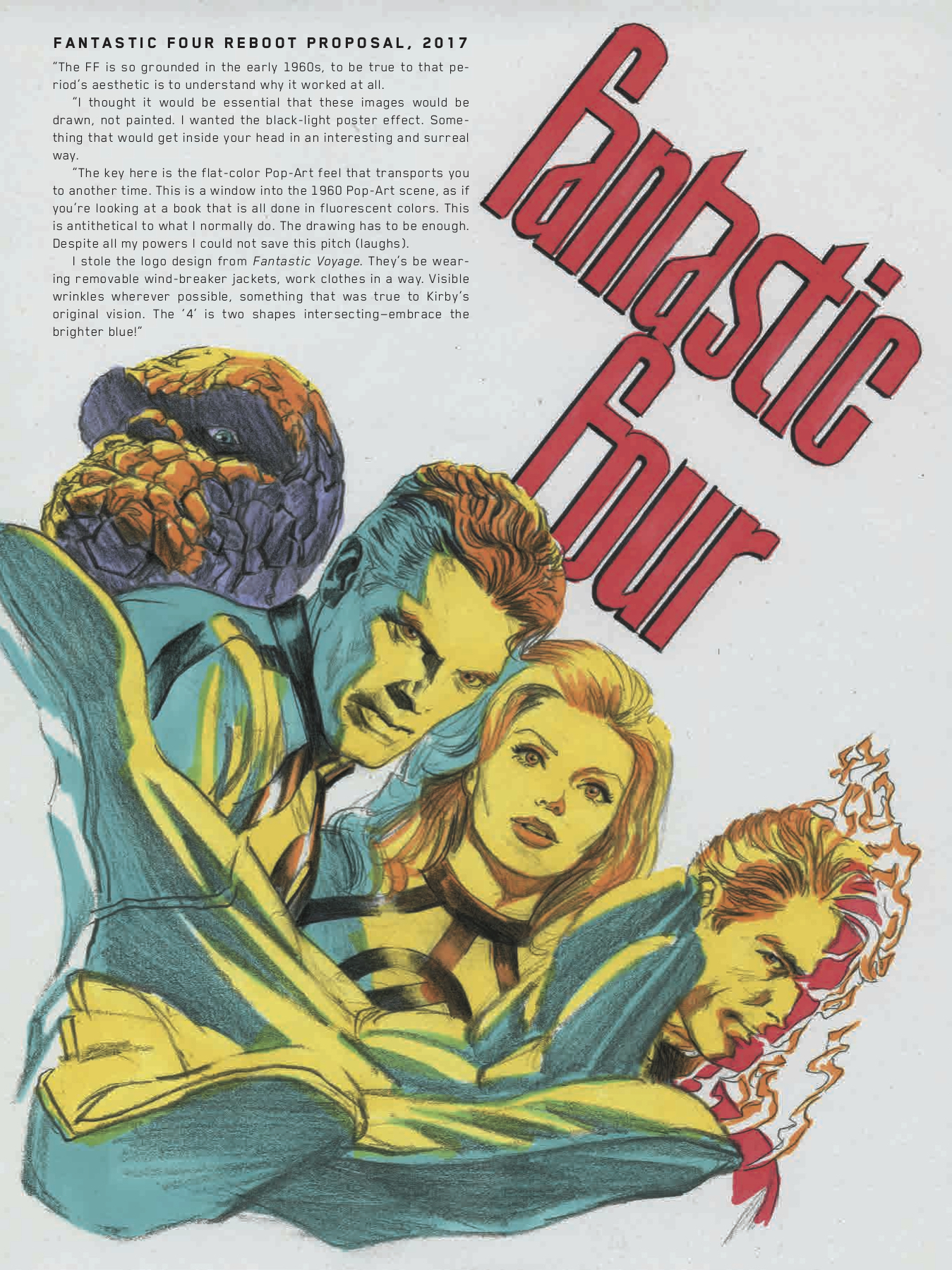 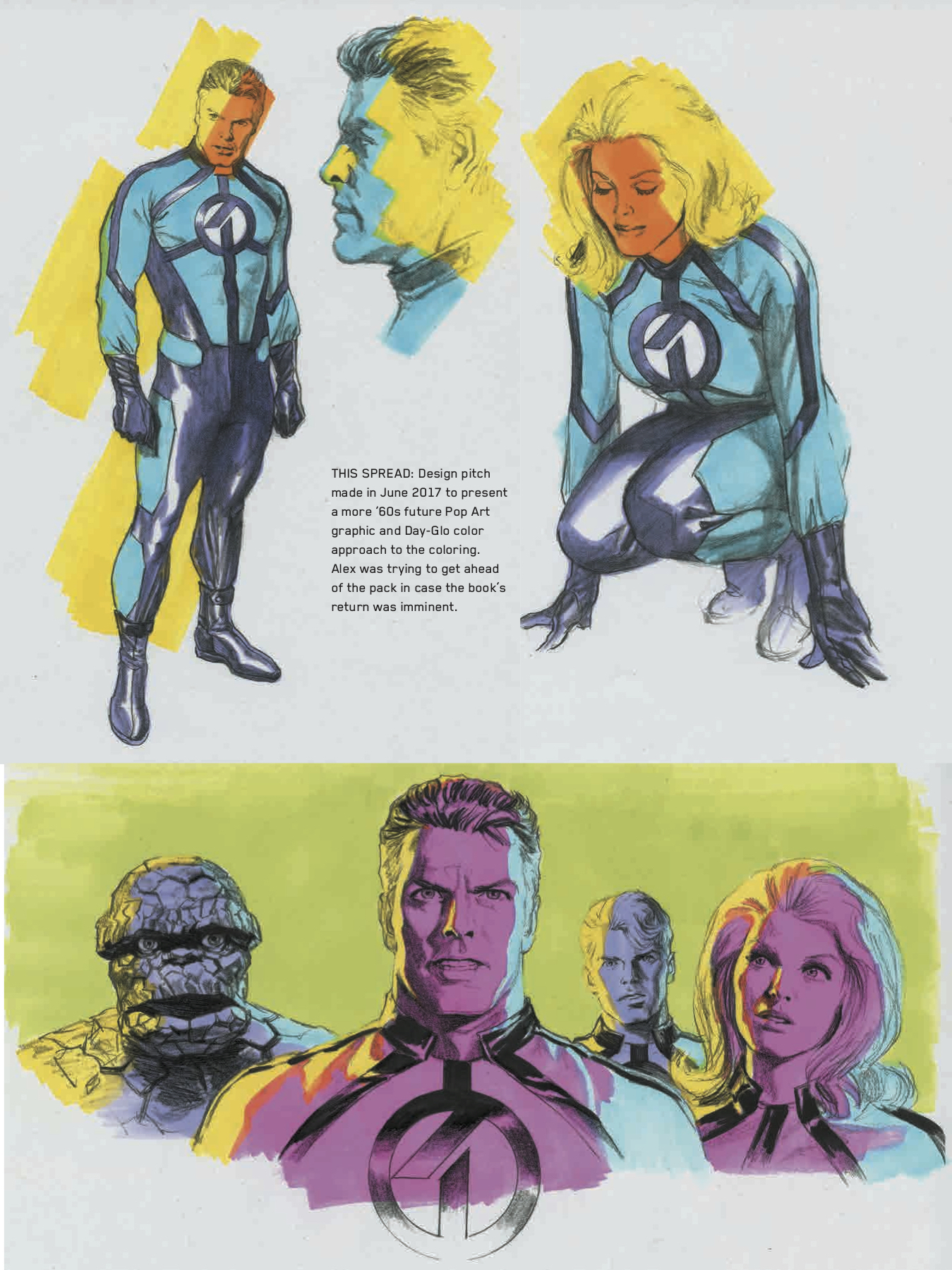 Ross spells out his vision across six pages in the book, including designs, sample pages and even treatments for potential logos.

He never explains why the project wasn’t greenlit but we can imagine what might have been: 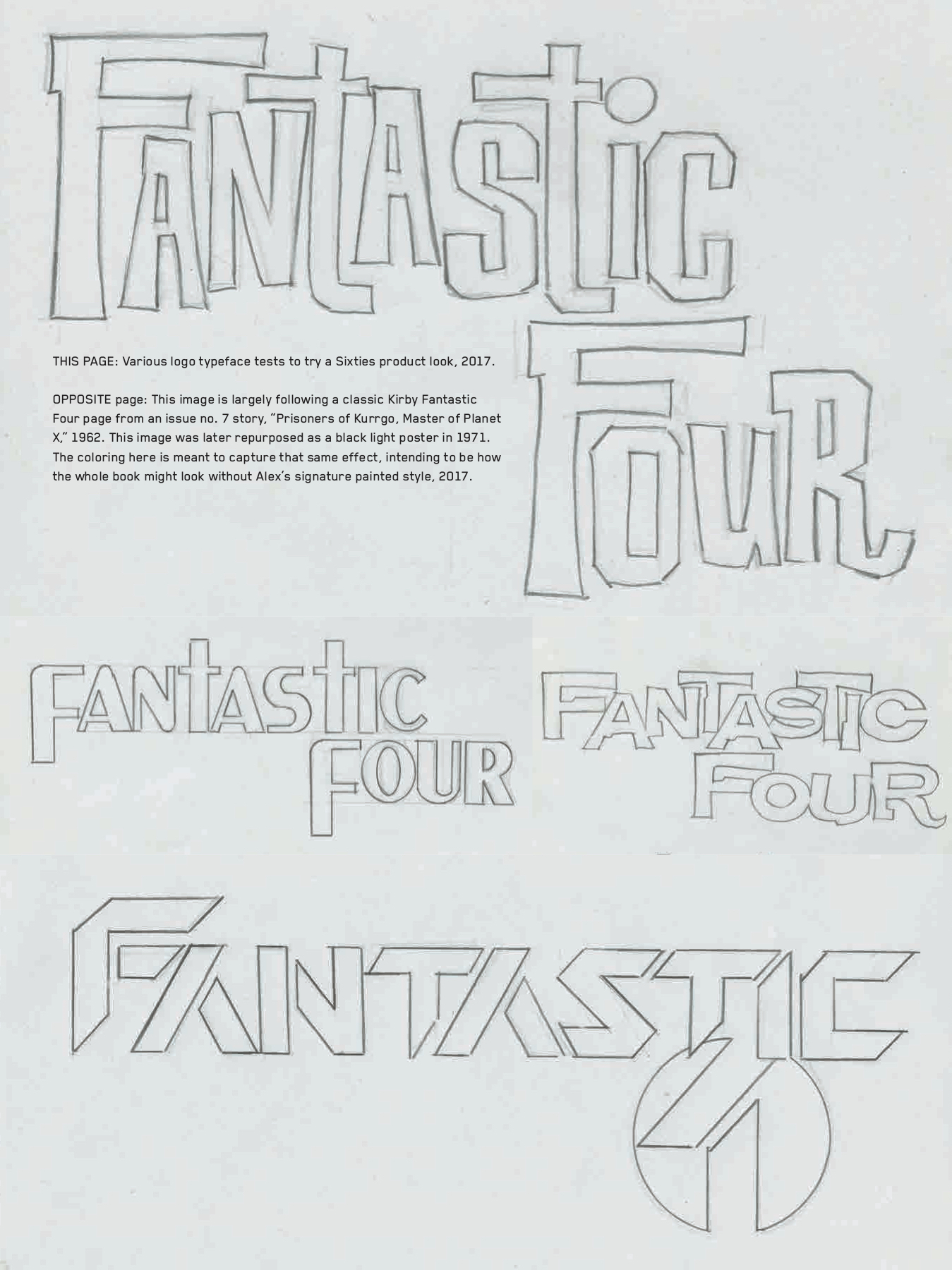 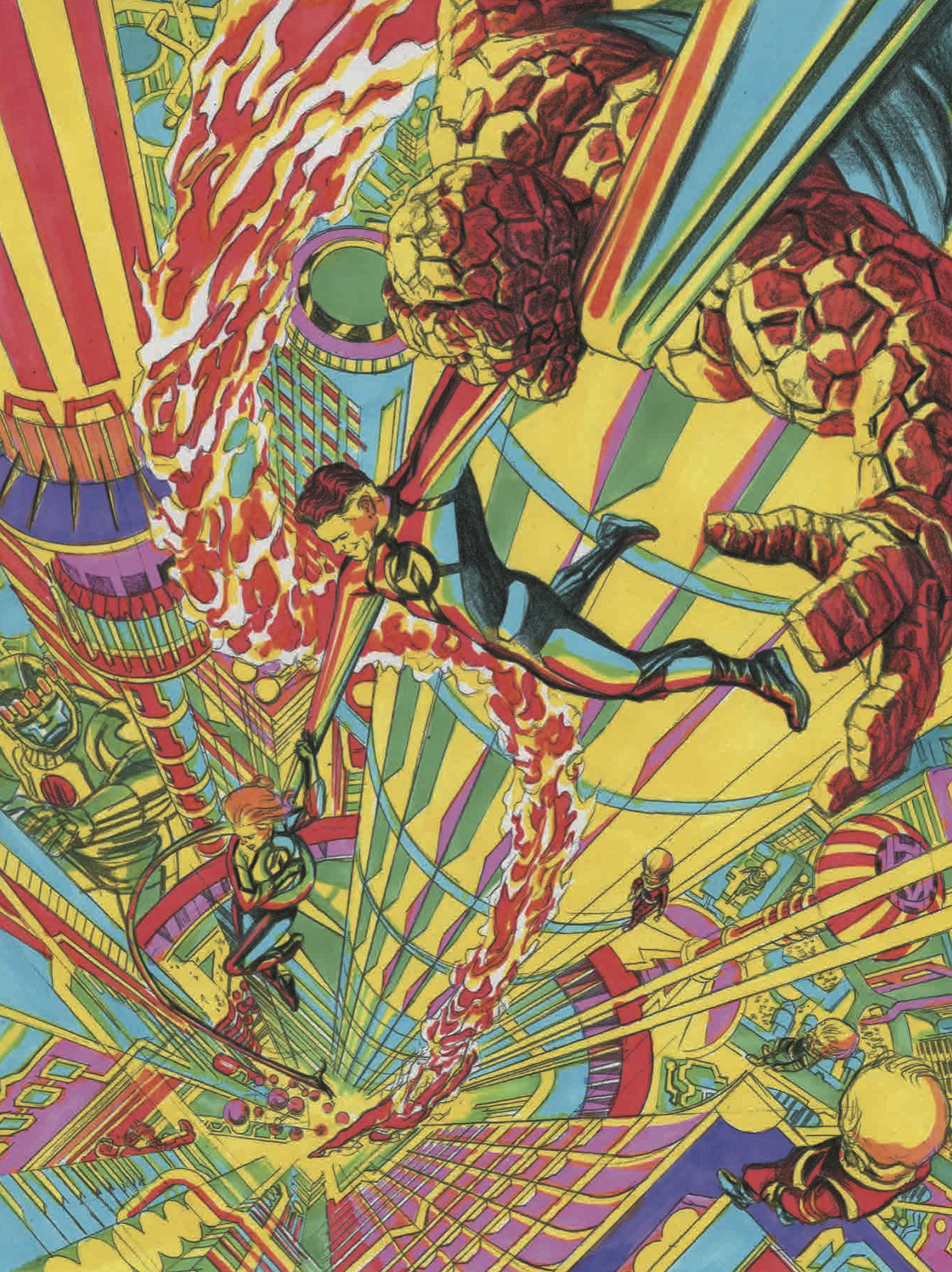 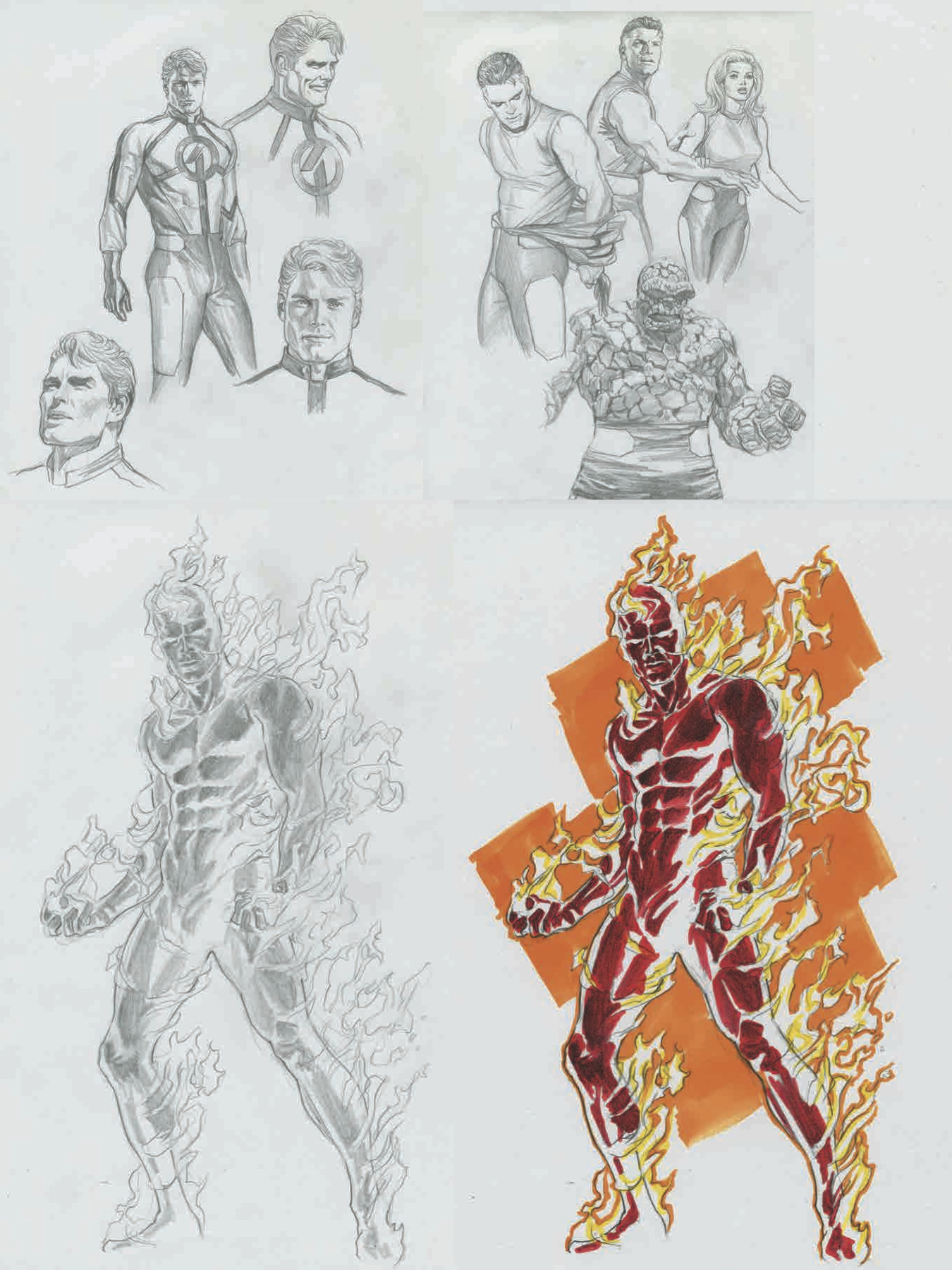 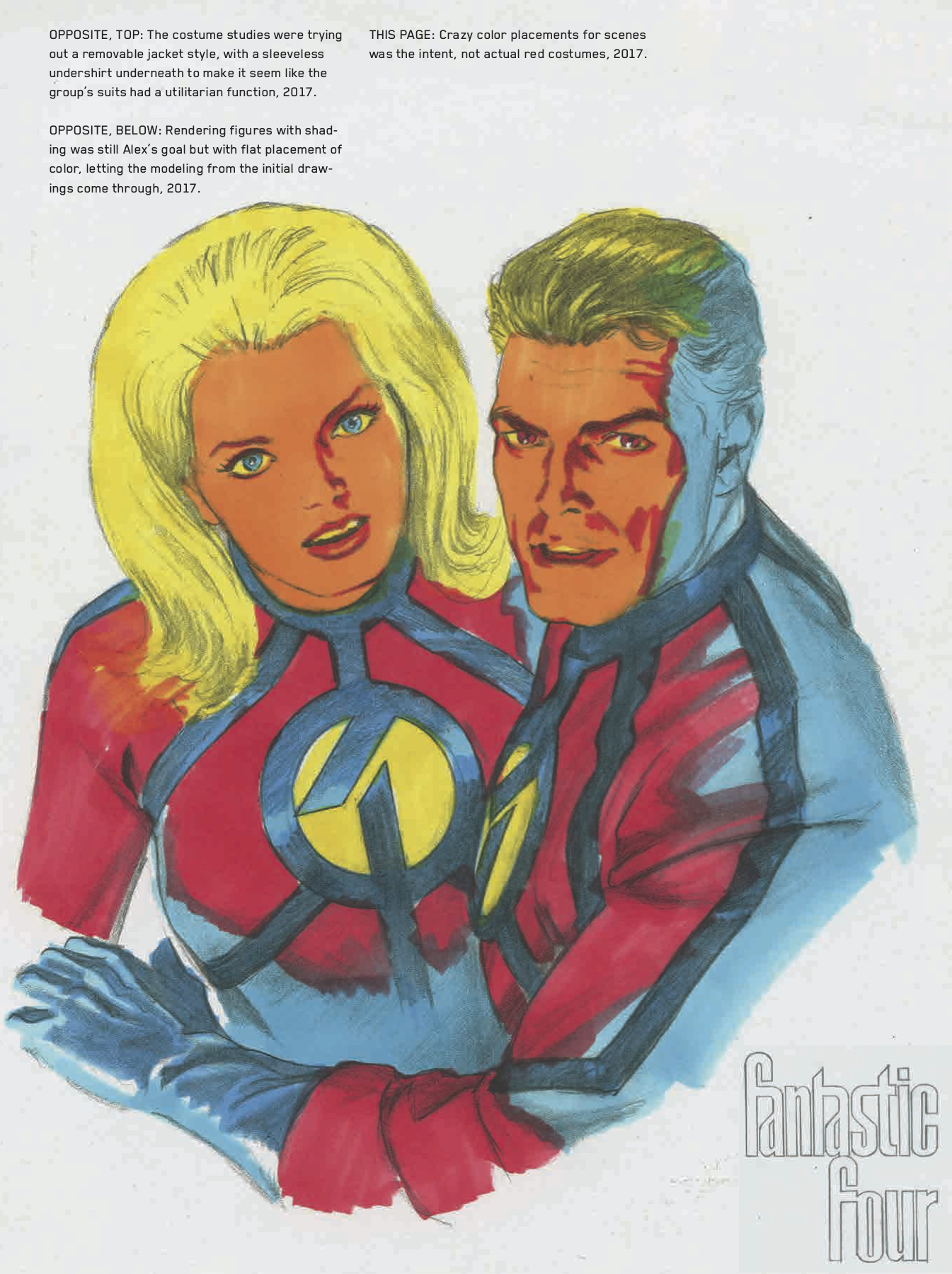 Marvelocity: The Marvel Comics Art of Alex Ross, is a 312-page, oversized hardcover, published by Pantheon. It lists for $50 and is available at comics shops, bookstores and online retailers. Miss it not, True Believers.