How DC Comics Turned the Page on the Infamous DC IMPLOSION 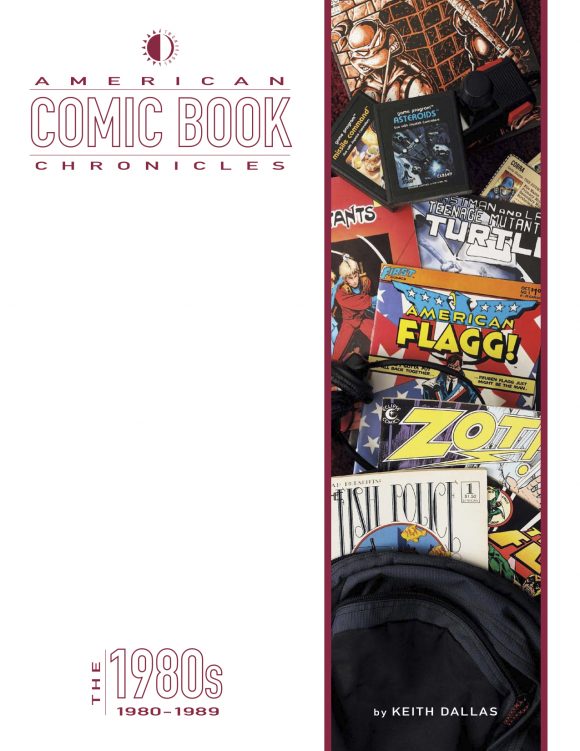 A new edition of TwoMorrows’ out-of-print American Comic Book Chronicles: The 1980s, by Keith Dallas, is due Feb. 12. The volume, part of the publisher’s decade-history series, is a heavily illustrated, year-by-year tour of the 10 years that bridged the Bronze Age with the Modern Age. We’re talking Crisis on Infinite Earths, The New Teen Titans, the exploding popularity of Wolverine, the black-and-white indie boom and so much more — not to mention a couple of small books called The Dark Knight Returns and Watchmen.

And that’s, as they say, just scratching the surface. (Click here for a look at Paul Levitz and Keith Giffen’s Legion of Super-Heroes, for example.)

But the decade started modestly, at least where DC Comics was concerned — and that’s where I’ve chosen to focus this EXCLUSIVE EXCERPT.

Forty years ago, the publisher was still crawling from the wreckage of the DC Implosion — which, as it happens, was the subject of TwoMorrows’ outstanding 2018 paperback Comic Book Implosion, by Dallas and John Wells. (It was serialized here at 13th Dimension. See links below).

Here’s a look at the early steps DC took to right the ship:

DC Comics’ flagship book, Superman, was that publisher’s best-seller in 1980. The caveat to that distinction is that with sales averaging 178,946 copies per month, Superman was outsold by at least a dozen Marvel titles and its sales had dropped over 25 percent in a year’s time. (Superman sold 246,276 copies per month on average in 1979.)

The rest of DC’s slate sold between 64,000 and 134,000 copies per month, with Detective Comics at the bottom of the pack with monthly sales averaging 64,635 copies; with each issue retailing for the then-daunting sum of $1, Detective Comics was one of a handful of double-sized DC books whose sales lagged far behind the rest of the line. With its 496th issue though (November 1980), Detective Comics became a standard comic book again with its $1 retail price halved to 50 cents. 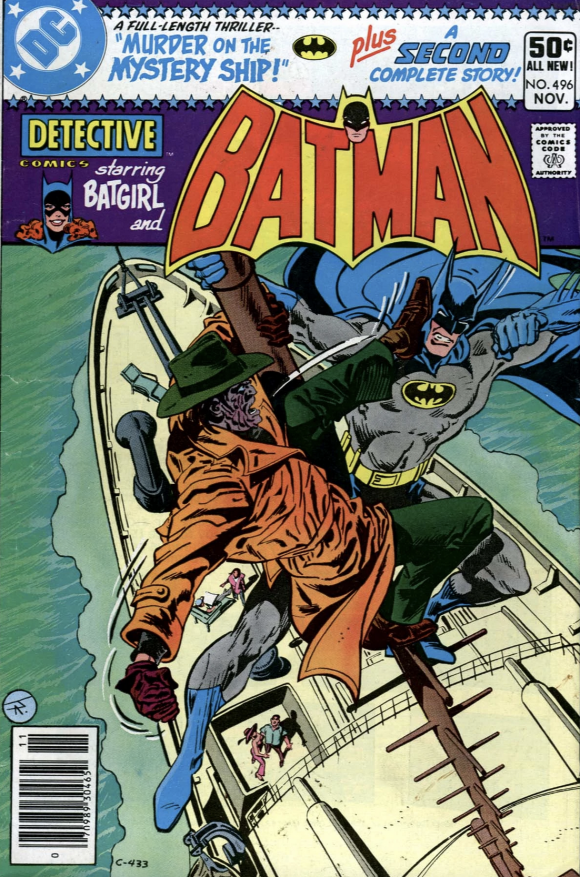 In 1980, DC Comics was still recovering from the infamous “DC Implosion” of 1978 when in one fell swoop company executives cancelled 30 titles (some of which had not even been released).

Of DC’s superhero titles, very few didn’t feature either Superman or Batman. Julius Schwartz, a DC Comics mainstay since 1944, shepherded the Superman line of titles: Action Comics, Superman, DC Comics Presents, New Adventures of Superboy and Superman Family, along with the tie-in to the Saturday morning cartoon Super Friends. Paul Levitz edited the Batman titles Detective Comics, Batman and The Brave and the Bold — and served as DC’s editorial coordinator. 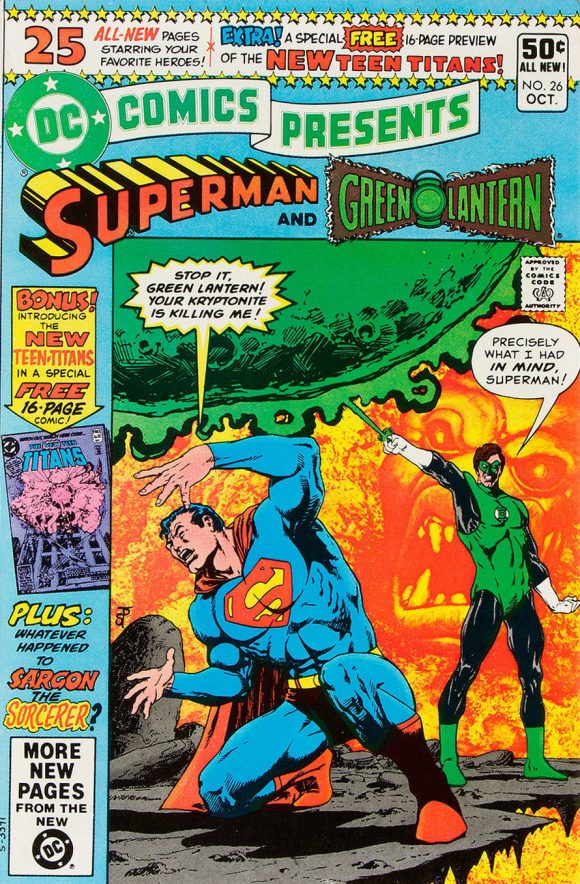 Other superheroes received the spotlight, though, once DC increased the price of its standard comic book to 50 cents, starting with its September 1980 releases. The new story page count of 25 meant the addition of a back-up story for most of DC’s titles, and that meant the opportunity for established characters like Aquaman (Adventure Comics), Firestorm (Flash), Adam Strange (Green Lantern), Huntress (Wonder Woman), Air Wave and the Atom (both in Action Comics) to receive new publication life. 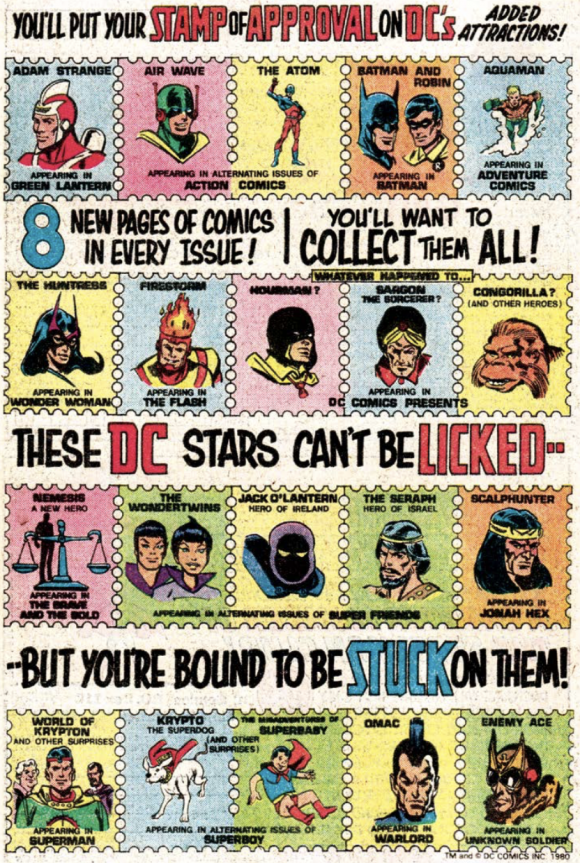 Another DC publication of note was The Untold Legend of the Batman, a three-issue miniseries recounting the Batman mythos. It was DC’s second foray into the mini-series format with 1979’s three-issue World of Krypton series being its first.

Following the example of such successful television miniseries as Roots (1977), the comic book miniseries was an attractive, cost-effective format for DC, especially given their reluctance to authorize any new ongoing monthlies in the wake of their “Implosion.” As such, by late 1980, DC announced more three-issue miniseries for 1981. Besides the already scheduled Secrets of the Legion of Super-Heroes, DC would release Tales of the Green Lantern Corps, Krypton Chronicles (initially titled Heroes of Krypton) and The Phantom Zone, the latter two series intended as tie-ins to the release of the 1981 Superman II movie.

DC’s achievements with its miniseries encouraged other publishers to use the format, and it can be argued that the decade’s most enduring and celebrated comic book publications were conceived and produced as finite series.

— BEFORE THE IMPLOSION: The Rise of DC’s Dollar Comics. Click here.

The new edition of American Comic Book Chronicles: The 1980s is a 288-page, full-color hardcover. It lists for $48.95 and will be available through comics shops and booksellers. You can also get it directly from TwoMorrows. Click here.