Want lots of choices of what to buy this week? Look no further! HUGE variety among our experts’ picks!

Daredevil #36, Marvel. As the “final” issue in this series, and especially after the last page of #35, I cannot wait to read this. This book has been consistently great, both the story lines and the art. I look forward to it so much that even though I could read the issues ahead of time, I don’t, because it’s a great example of why I love comics. I’m also looking forward to Matt in San Francisco! 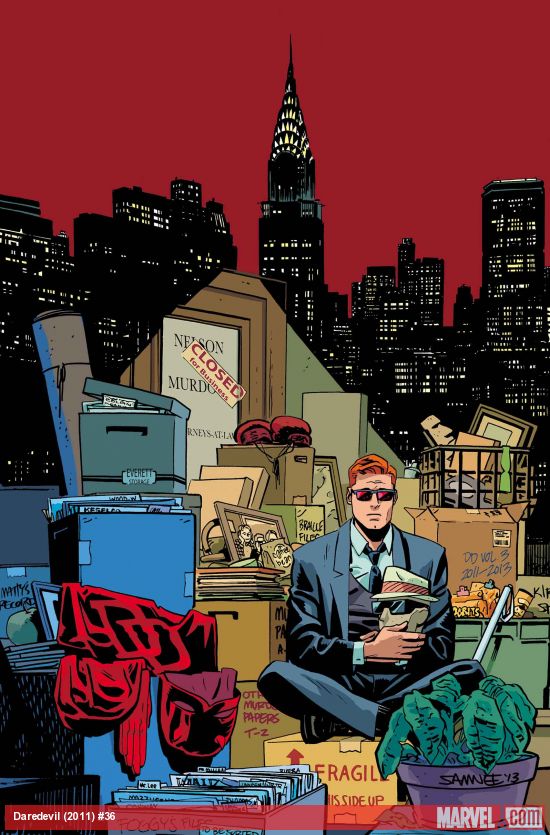 “Revival” trade paperback, Vol. 3, Image. Tim Seeley and Mike Norton. Need I say more? I mean, I am going to, but they are a great team and Revival is one of those books that snuck up on me and quickly became one of my favorite books. It’s been full of twist and turns and is a great example of what storytelling should be. Check it out!

Curse #2, Boom! Wow, did I love Curse #1. There were some panels in there that were so chilling, like the one where the psychopath is tied up with bear traps all around him. I wasn’t even sure what I was going to read when I first opened the pages and then I was mesmerized. Moreci is quickly becoming one of my go-to authors and I’m kind of bummed that this is only a mini-series.

New Warriors #1, Marve. I have a GINORMOUS soft spot in my heart for this title, dating back to their ’90s run. This go ’round looks very “of the moment” in the Marvel Universe, while still conjuring that rebellious kid vibe.

Justice League #28, DC. Cyborg’s back, and he’s kickin’ with the New 52 Metal Men. Will they be able to take out any of the Crime Syndicate? Why’re you asking me? Nobody tells me nothin’! 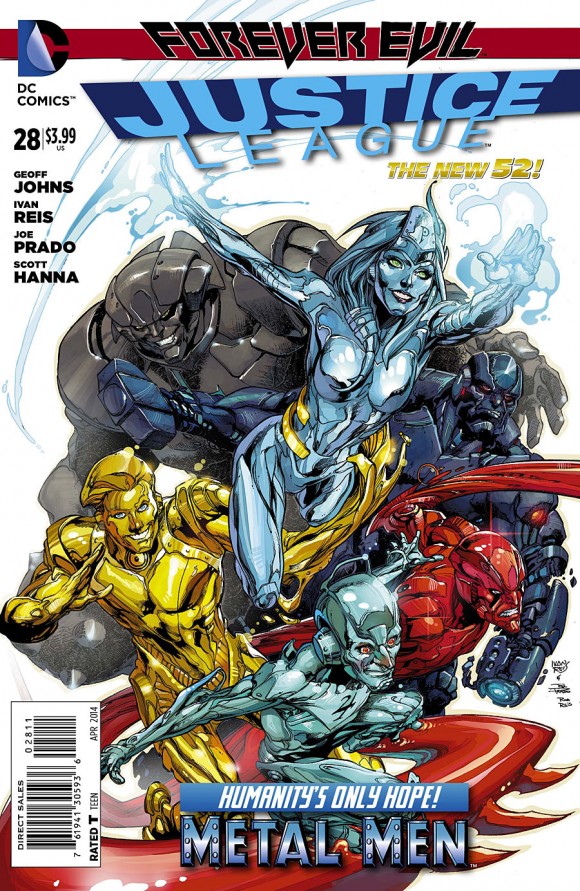 Fables #138, Vertigo. A standalone story centering on Geppetto, aka the Adversary, brought to you by Bill Willingham and guest artist Russ Braun. Some tigers don’t change their stripes, and neither does the Adversary.

“WE 3” trade paperback, Vertigo. If you haven’t read Grant Morrison’s gut-wrenching, action-packed thrill ride of a cat/dog/bunny tale, now’s the time. Spoiler alert: If you don’t squeeze a tear out at the end, you’re a heartless bastard.

Henry and Glenn Forever and Ever #4, Microcosm. This book is so good I want to lick my fingers after I read it.  It’s the fried chicken and waffles of mini comics. Anyone out there thinking “what the hot fudge is this nutjob talking about?” picture this: Henry Rollins and Glenn Danzig are lovers living in the ‘burbs, plagued by Glenn’s mother. Not hooked yet?  Their neighbors are Hall & Oates. And they’re Satanists. For those of you already hip to this book, #4 is on the shelves as of this posting, so get your fix early. Bonus: Love & Rockets alternate cover! 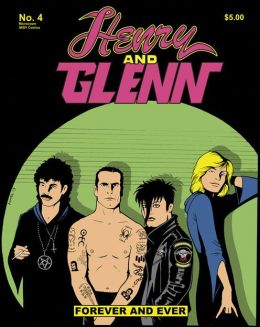 Punisher #2, Marvel. When I was younger, the Punisher was one of my favorite books. It featured a man taking down the bad in the non-superhero part of the Marvel Universe. As of late, he has lost his way a bit. We have seen him on the Thunderbolts team, but  to me, that really isn’t who he is. To me he was always a lone wolf, he wasn’t in it for anyone but himself. The first issue in this volume by Nathan Edmondson brings him back to that Frank Castle we used to know. He takes him out of New York and into Los Angeles, where he is working for himself again. The art by Mitch Gerads was pretty spot-on and fit well with the grittiness that it needs. If the other issues were as good as the first, it will be on top of my pile every week. 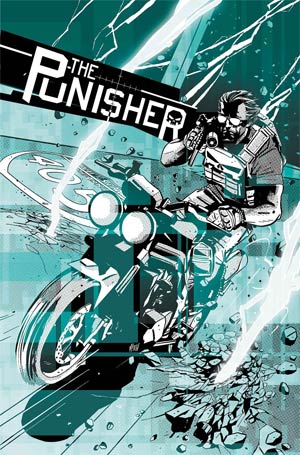 Daredevil #36, Marvel.  The last issue before Matt Murdock heads out to San Francisco! I hope that he keeps my hometown safe! I’m sure he will in the very capable hands of Mark Waid.

“Batman: Li’l Gotham” trade paperback, Vol. 1, DC Comics. Hands down the best Batman book coming out right now. Dustin Nguyen’s watercolor chibi version of Gotham’s heroes works on EVERY LEVEL. Perfect for someone who just wants a self-contained Bat-story, great for kids, not too dumbed down for adults. … Seriously, if you haven’t been reading this digital-first series either on your iPad or as they come out in print, this is a perfect opportunity to try one of the best things DC has going right now.

“Red Sonja: Queen of Plagues” trade paperback, Dynamite. Gail Simone’s run on this iconic character has been fun and readable from Issue #1, and now you get the first story collected in one volume. In this tale, Sonja goes up against Dark Annisia, her crazed counterpart. There but for the grace of Crom (or whoever) goes Sonja. By the way, I SERIOUSLY love this book, I even wrote a “You Should be Reading This” about it a few months ago: https://13thdimension.com/you-should-be-reading-this-red-sonja/

“Zero” trade paperback, Vol. 1, Image Comics. Ales Kot and his five co-conspirators have crafted one of the finest espionage books on the market and now these first issues are collected for only $9.99! One of the brilliant things about Zero has been the way each issue works so perfectly on its own while building the characters and the world in an almost nonchalant way. Edward Zero and all his adventures seem almost secondary by the time the end of the fifth issue rolls around. If you love good writing, masterful world-building, and slam-bang action that actually leads somewhere, Zero is for you. I’m willing to bet that you, like me, will finish the last page and be clamoring for more more more! 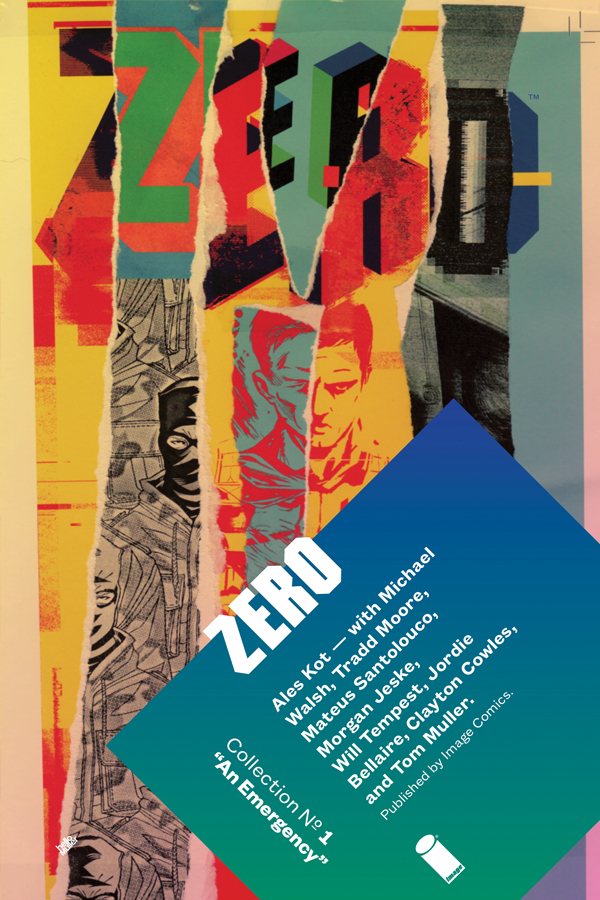 “Journey Into Mystery, by Kieron Gillen: Complete Collection,” trade paperback, Vol. 1 , Marvel. Now is your chance to pick up one of the most talked-about comics of 2012. Gillen’s Journey into Mystery chronicles the misadventures of a resurrected, young Loki and his fantastic supporting cast. He has no knowledge of his past and all of the scorn of his fellow Asgardians, as well as the suspicion of everyone else. He can’t escape that, nor his own mischievous nature. Only his brother, Thor, trusts him and sees his innocence for what it is, and together they are able to sway the masses and win over the hearts of everyone they encounter… which was Loki’s plan all along! This was the most amazing thing I read when it was coming out, because every issue was full of deception and twists, albeit of a playful nature. You truly never know what Loki’s intentions are even by the end of the run. With fantastic art by Doug Braithwaite and others, I recommend this to everyone, and especially anyone looking for a read as good as Sandman. 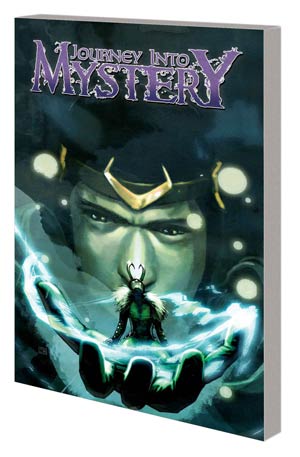 Punisher #2, Marvel Comics. Jeez, I’ve been on a Marvel kick lately. Look, I’ll level with you, reader. I hate Punisher, I think in the context of the Marvel Universe he makes no sense. How he operates, what he does, his motivation, rogues, etc. That’s why I felt Punisher MAX was just an overall better book, because (spoiler alert) he dies at the end of it. Paul Kersey, he’s not. I like Nathan Edmonson. He wrote a fantastic mini series called Dancer from Image Comics that I recommend. In fact, it was so good I picked up a title I normally wouldn’t to see what he’d do. The result is I loved Punisher #1 enough to recommend that and this to everyone. Art brought to you by Mitch Gerads.

What are you most looking forward to? Leave a comment!