What, you’re surprised Parker’s on here?

“Thumbprint,” by Joe Hill and Jason Ciaramella, hardcover, IDW. I am not one for war stories, especially current stories like this one about Abu Ghraib prison. However, I picked up this series because it was Joe Hill and was hooked from the first page. Plus the art — incredible. I recommended this to so many people that we ran out and couldn’t get more copies. Finally, everyone is in for a treat as the hardcover is out Wednesday.

Krampus! #1, Image. Please, give me this book now. I’m all for the holidays and all, but who doesn’t love a good Grinch-type story. And Krampus, he’s the Grinchiest of them all! And Image has been on such a roll lately, I could list all their books on my must-read list! Written by Brian Joines, with art by Dean Kotz. 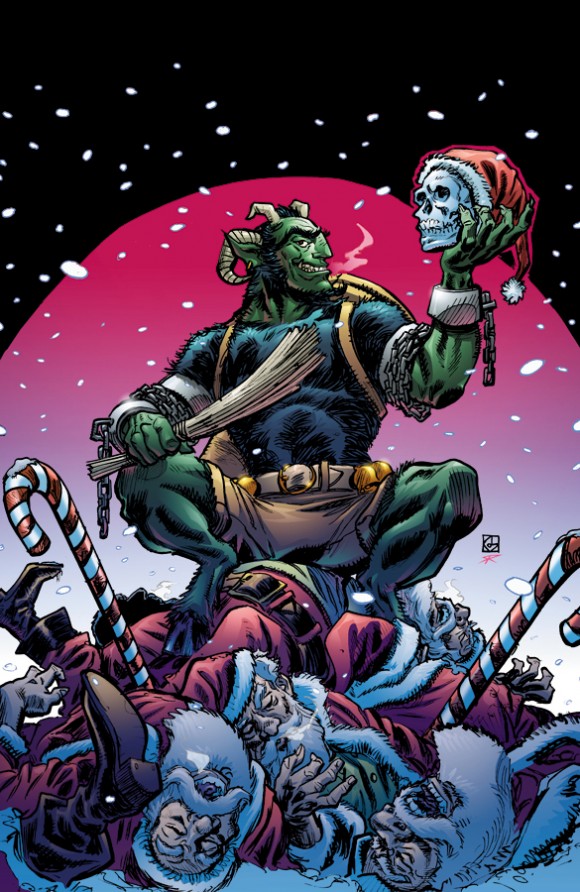 Alex + Ada #2, Image. So now Alex has Ada — what does he do? (Get your mind out of the gutter, folks!) Does he keep her? Does he? TELL ME! And please, more Grandma! I loved her in #1! Written by Jonathan Luna and Sarah Vaughn, with art by Luna.

Astro City #7, Vertigo. The start of a new story line for this relaunched series! One of the greatest single issues Busiek and Anderson ever created was the one where Samaritan and Winged Victory were forced to go on a date. Rarely had a comic taken such a fun, almost cliched, concept and brought so much into it. Watching these two discuss their philosophies, goals, and attitudes about secret identities made for one of the finest super-hero moments in my reading memory thanks to Busiek’s fantastic writing and Anderson’s expressive art. Honestly, Astro City is always great but if this storyline contains even half of the greatness of that single issue, it will be amazing.

“Richard Stark’s Parker: Slayground,” hardcover, IDW. Darwyn Cooke’s Parker books are always a treat; stylish tight noir with some of the goddamn best paneling and atmosphere as any damn book out there. Like all the best noir books, you can read any Parker without the others, so there’s no reason not to start here: Parker is hiding out in an abandoned amusement park after a botched heist, while some crooked cops and their thugs try to track him down. Expect tight action, pithy writing and a wonderful reading experience. 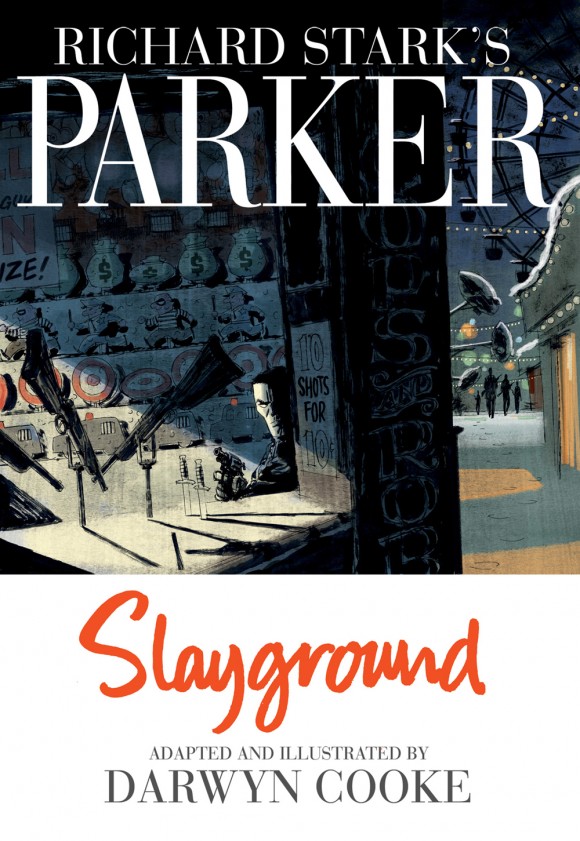 Superior Foes of Spider-Man #6, Marvel. It’s rare that I talk about a company-owned book here, certainly even rarer for it to be a big name super-tights book but Superior Foes is not your average super-tights book. Nick Spencer and Steve Lieber have crafted an amazing comic about B- and C-list Spider-Man villains that sparkles with wit, amazing art and some of the best characterization out there. It baffles me that people who are reading Hawkeye, Young Avengers, and other stylistically superb super-books aren’t reading this one. It’s my first read every week that it comes out and it should be yours too. Hell, even if you don’t like superbooks and the only things you pick up at your store are Saga, Sex Criminals, and Locke & Key, I still think this is a book worth checking out. Imagine a mash up of Dr. Horrible and the Sopranos all seen through an Arrested Development lens and you have Superior Foes of Spider-Man. NOTE: The Trade paperback of the first storyline is solicited in this month’s Diamond, so if you’re more of a trade-waiter than a single-issue reader, make sure you ask your retailer to order you one! 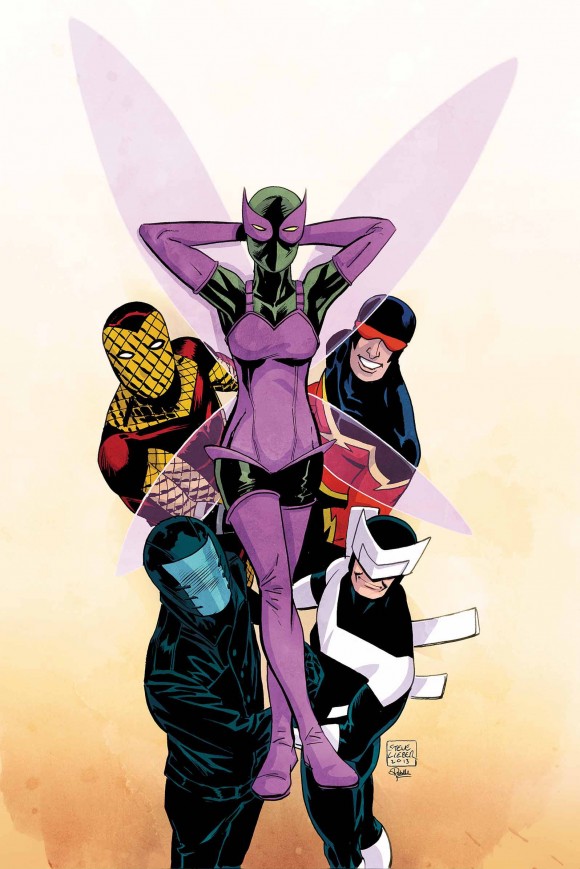 “Richard Stark’s Parker: Slayground,” hardcover, IDW. If I had a nickel every time a customer asked when this book was coming out, I would have enough to buy it.  They, like myself, have been eagerly anticipating the fourth adaptation from Darwyn Cooke. Parker is the model noir character that all others aspire to be.

Batman #26, DC Comics. The best way I can describe the last few issues of Zero Year is simple: They were a love letter to Batman.  Scott Snyder takes a little bit from every incarnation of Batman and mixes them into an awesome retelling of his origin. 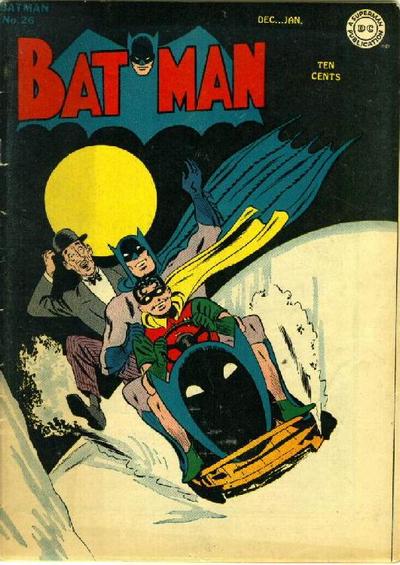 Wait, is it snowing during Zero Year?

It’s T-shirt time! Replace that worn-out TMNT Ice Capades tee already! Don’t look like a bum when you go home for the holidays. 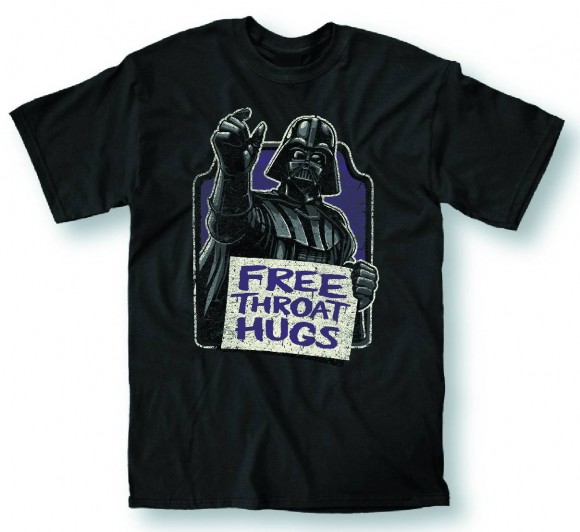 Deadpool Tacos t-shirt, Marvel. It’s Deadpool. Riding a f@(%ing pegasus. To get tacos. That’s some serious love right there. And I totally didn’t make the obvious joke. Classy. Like this shirt. 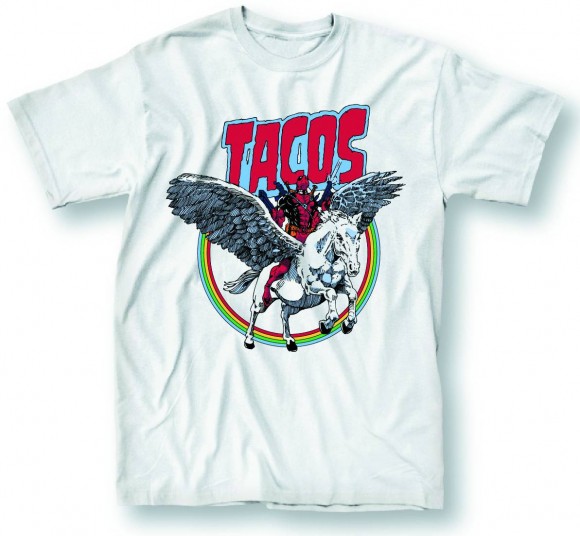 Wolverine and the X-Men #39, Marvel. I am excited to see a new team-up between Cyclops and Wolverine. These guys are some of the best dudes to watch interact. They’re enemies now, which is fine, but it makes me miss the times they were together. I guess I’m a Cyke/Logan shipper. Sentinels, beware the power of ultimate friendship!

Justice League 3000 #1, DC Comics. Justice League 3000 is not just likely to be the year Warner Bros. gets this movie property right, it’s also the new title that replaces Legion of Super-Heroes. I am very curious to see what they are doing and how if in any way it will affect other titles. Also, I’m wondering where Aquaman 3000 is. 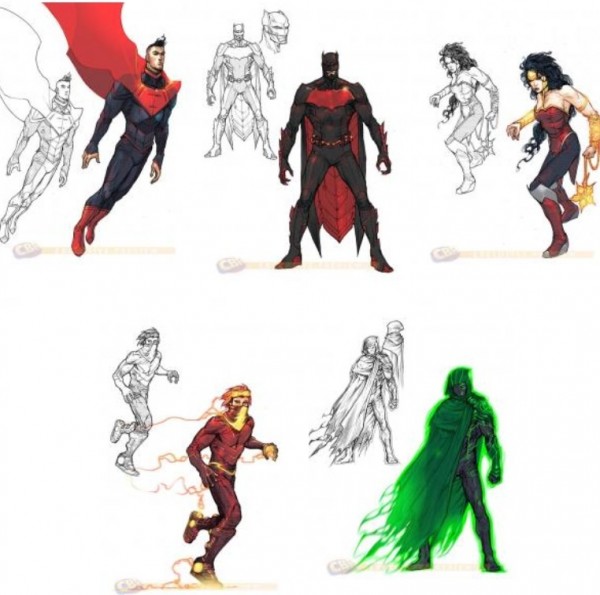