The Japan-based manufacturer captures Dick Grayson in all his black-and-red glory.

I’m a recent convert to the statues world. For me, it was traditionally articulation or nothing, but my son picked up an ARTFX+ Superman late last year and I was hooked.

Maybe it’s the scale, or the sculpt or the metallic sheen, or all three, but I found myself circling the new releases at my comics shop. And then I took the plunge. Fast forward and now not only am I a devotee, but we’re running giveaway contests here at 13th Dimension.

That’s the full disclosure portion of the program. What’s new is that I got my hot little hands on Kotobukiya‘s Nightwing, which will be in stores some time in the next few weeks. 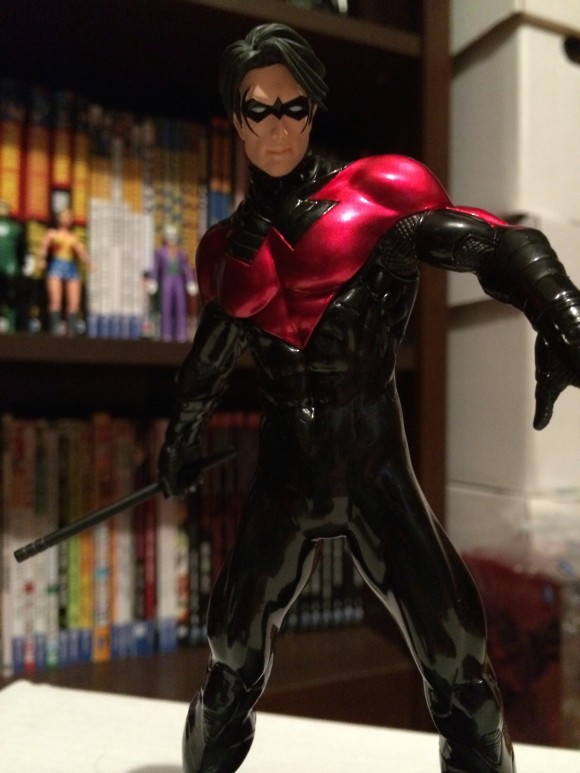 Interestingly, we haven’t seen much New 52 Nightwing merch but this year we’re gonna get no less than three figures, including this one — just in time for Dick Grayson to give up the costume, at least for the foreseeable future.

This figure captures the proper look and attitude and he’s molded in a cool pose, complete with escrima stick. The glossy paint job is solid.

Side note about the outfit: I really dig this look. It always made more sense to me for Dick to wear red and black than blue and black — although I do confess a deep, abiding affection for his original Disco Nightwing costume. In any event, this is a case where the New 52 improved on a character’s look.

The ARTFX+ line is reasonably priced at between $40 and $50, depending on the figure and where you get it. That’s really not much more than many collectible action figures, but that’s between you and your budget.

So while Nightwing is showing up on shelves just in time for his goodbye party, at least there’s this: Better late than never.

NOTE: Nightwing proved so popular in last month’s Kotobukiya contest that we’re planning another one soon — pairing him up with another popular member of the Batfamily. (This month, we went the Marvel route.)