FUNKO BATMOBILE REVIEW: The Great, the Good and the Quibbles

13 QUICK THOUGHTS: Does it deserve a spot in your Batcave? Oh, yes.

So we’ve written an atomic pile’s worth of stories already on Funko’s new Batman ’66 3.75-inch line. (Click here.) But now that the first item is out — the Batmobile with Batman and Robin — it’s time to take a look at whether it’s right for you.

Now, before I even get started, it’s worth repeating that I think this has the chance to be the definitive Batman ’66 action-figure line, given Funko’s desire to go further than other companies in terms of pulling out obscure and interesting variants that add substantial value to the line and don’t feel like money grabs.

So I’m already inclined to like what I see. I really want this line to succeed because I really dig everything about it. I’m also not the kind of guy to write product reviews of things I don’t like. Life’s too short, y’know? But there are always quibbles, and I’ll point some of them out along the way.

Nevertheless, there’s far more to love than not. Here goes:

1. The Great: That this exists. As I just noted, I’m incredibly excited by this line. Keeping this to the Batmobile set itself, Funko’s done a great job of capturing the likenesses while also making it clear that these are toys. You don’t have to put on white gloves to hold these and pose these and roll the Batmobile around. 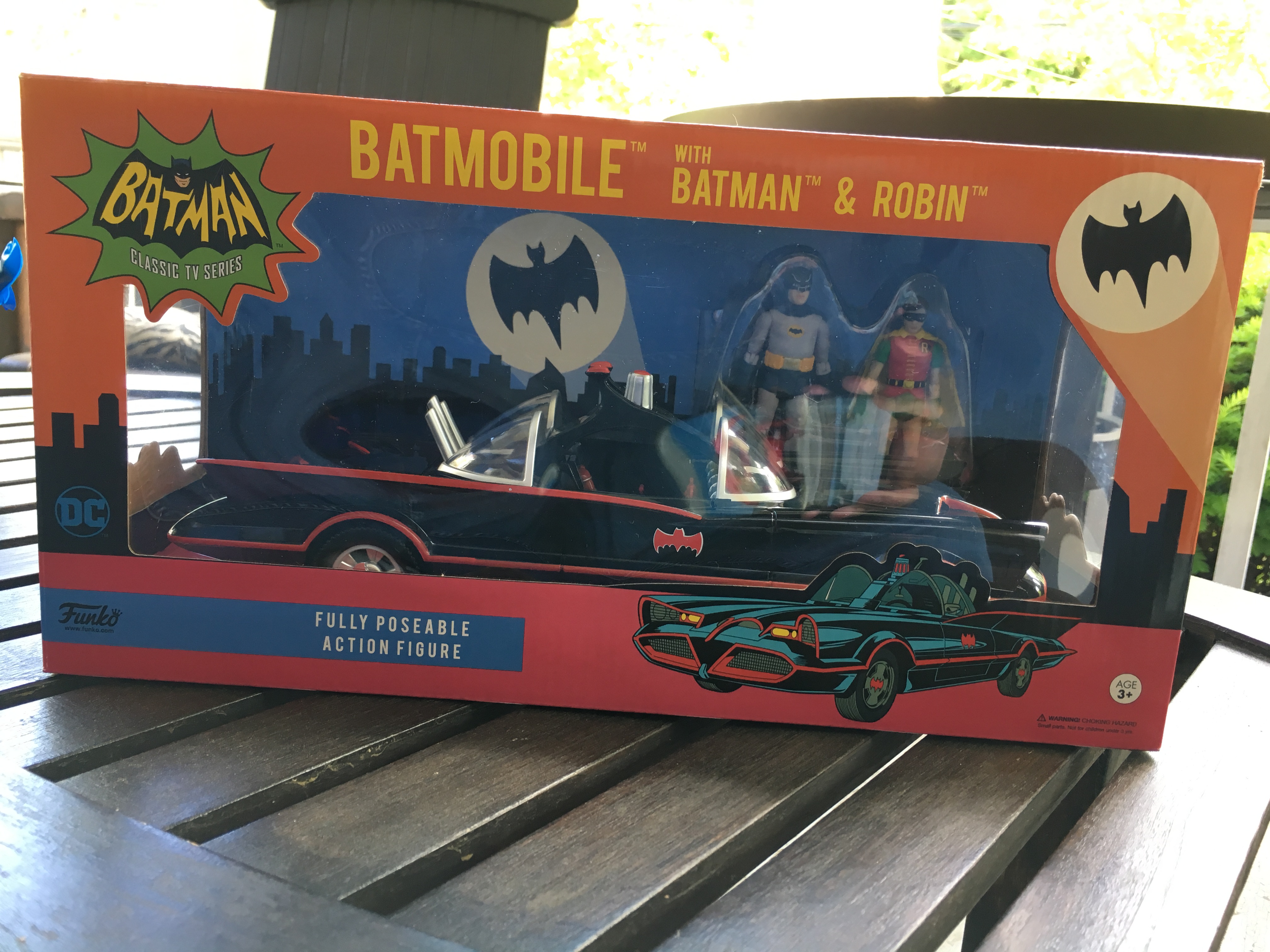 2. The Good: The Batmobile looks terrific even if it has to take some shortcuts with its various accoutrements. It’s shiny and solid. 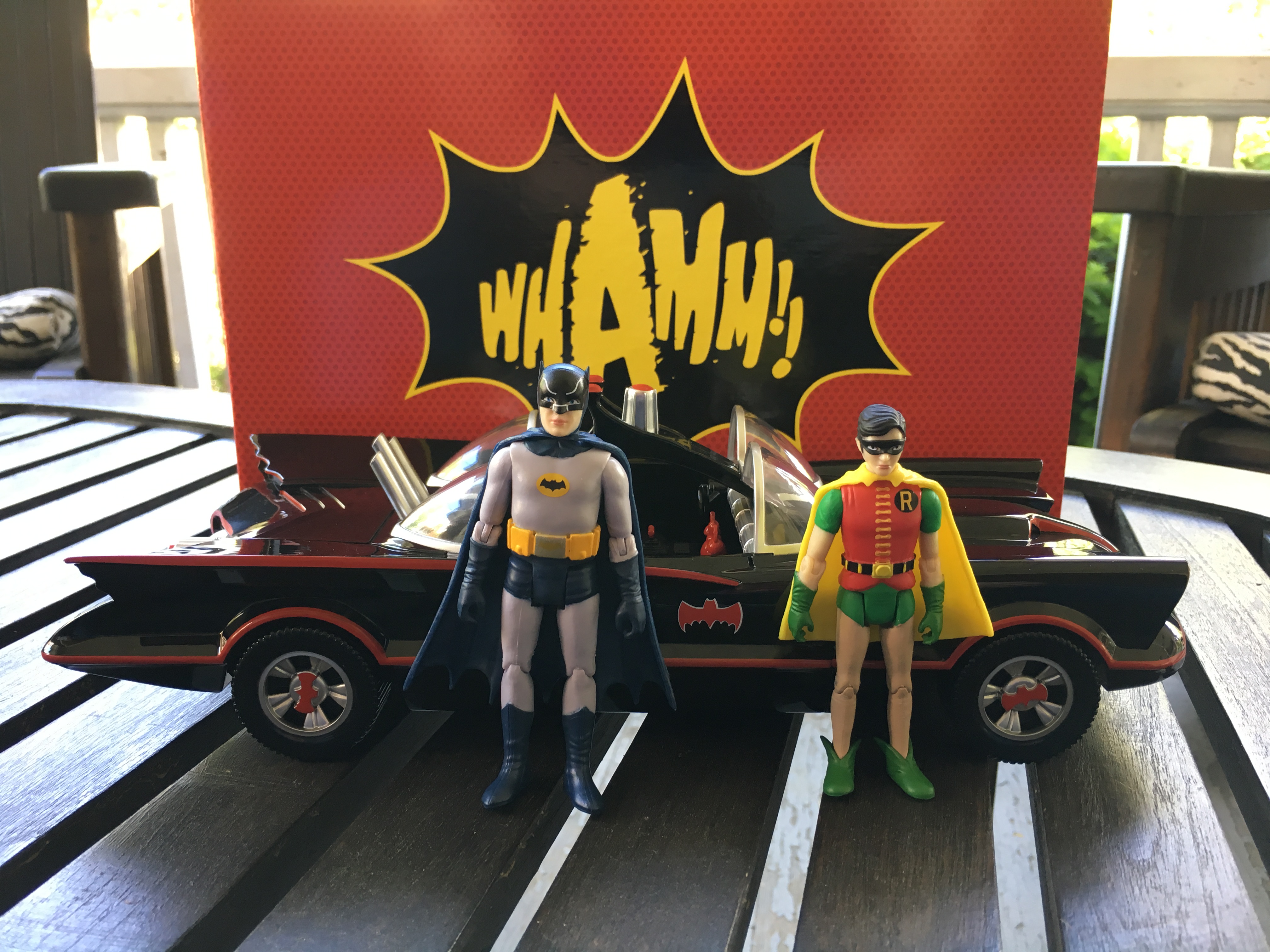 3. The Quibble: The Batmobile is too short. But so what? Funko made the choice to tighten the dimensions for a variety of reasons — affordability and shelf space among them. Would I have preferred the dimensions to be show accurate? Of course. But my all-time favorite toy Batmobile — the Mego Batmobile — is way off scale, so who am I to complain? 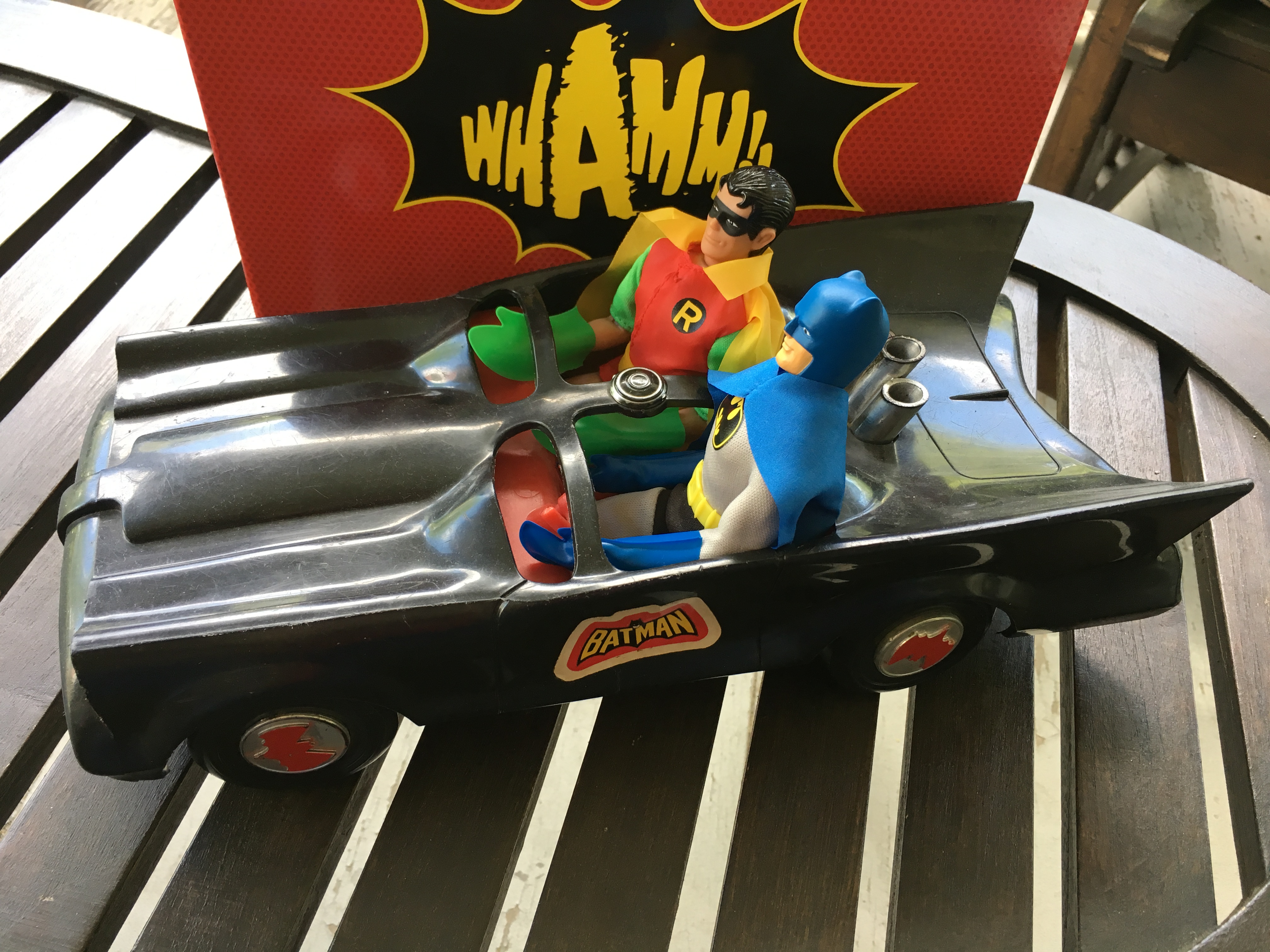 4. The Great: At the same time, check out the detail on the Batphone. Where Funko decided to get into the nitty gritty, they really succeeded. 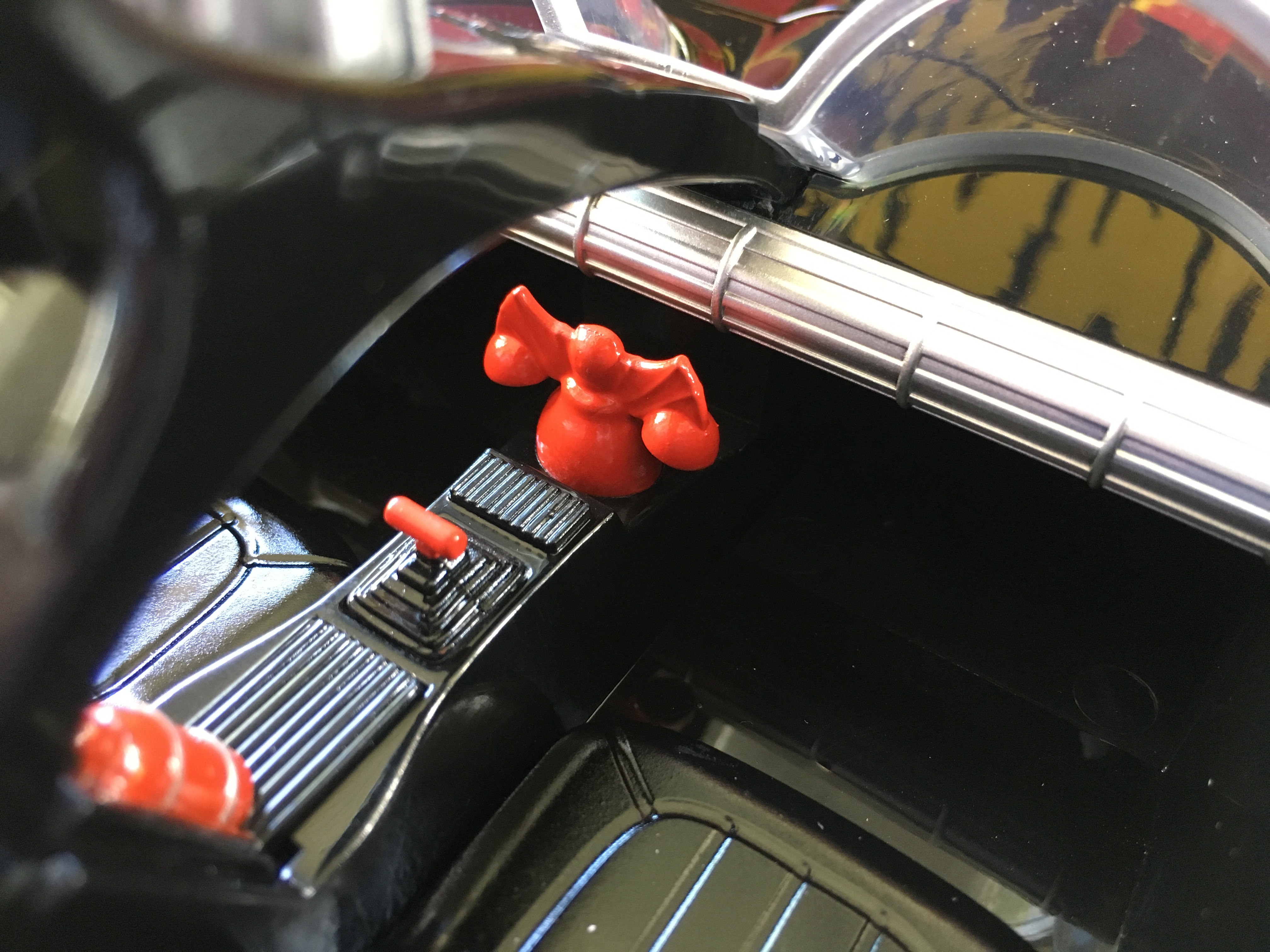 5. The Great: The front and rear. Outstanding. 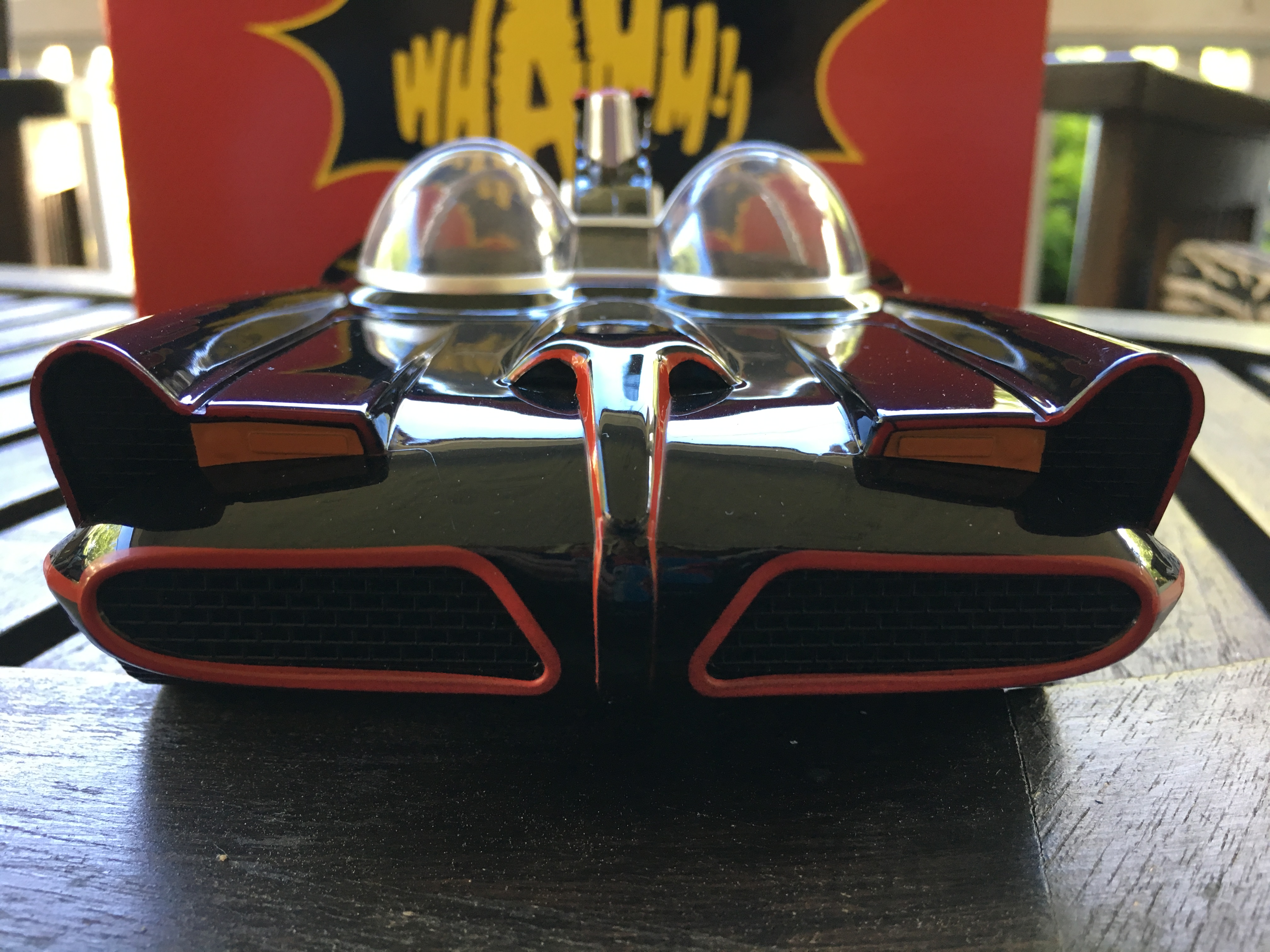 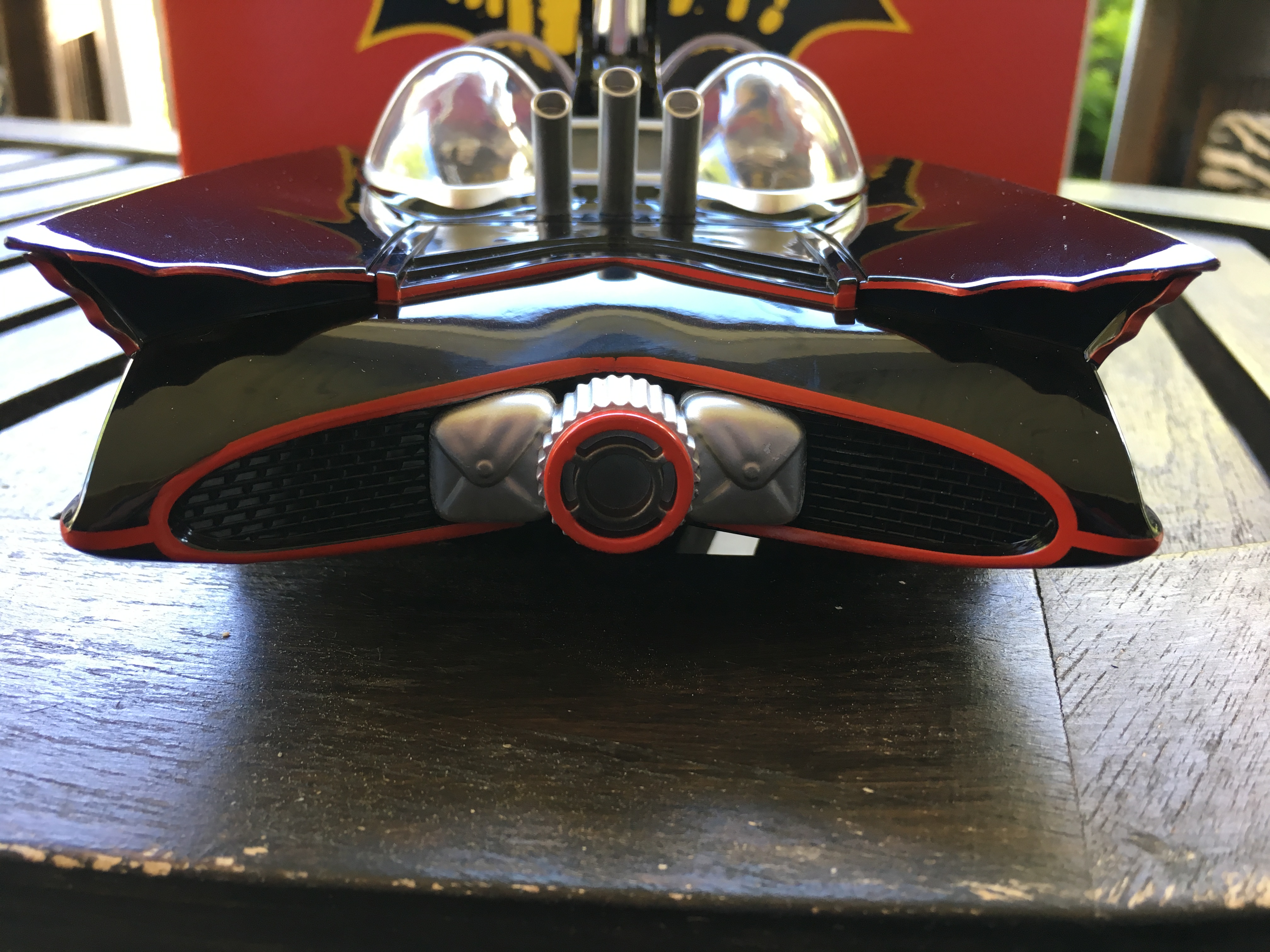 6. The Great: Batman himself. Some readers have beefed that his body is a little too stocky. I find it refreshing. That’s closer to Adam West’s build than many other Bat-items we’ve seen over the last few years. The color scheme is right on and I love that the Batsymbol is centered in his abdomen, where it was so often on the show.

7. The Good: Sure, his legs could be longer and skinnier but this is 3.75-inch scale we’re talking about, and like the Batmobile, you can’t exactly compare this to a $250 1/6-scale figure.

8. The Quibble: The eyebrows are well-designed but out of scale with the rest of his mask. I’d like to see Funko fix that in future waves. 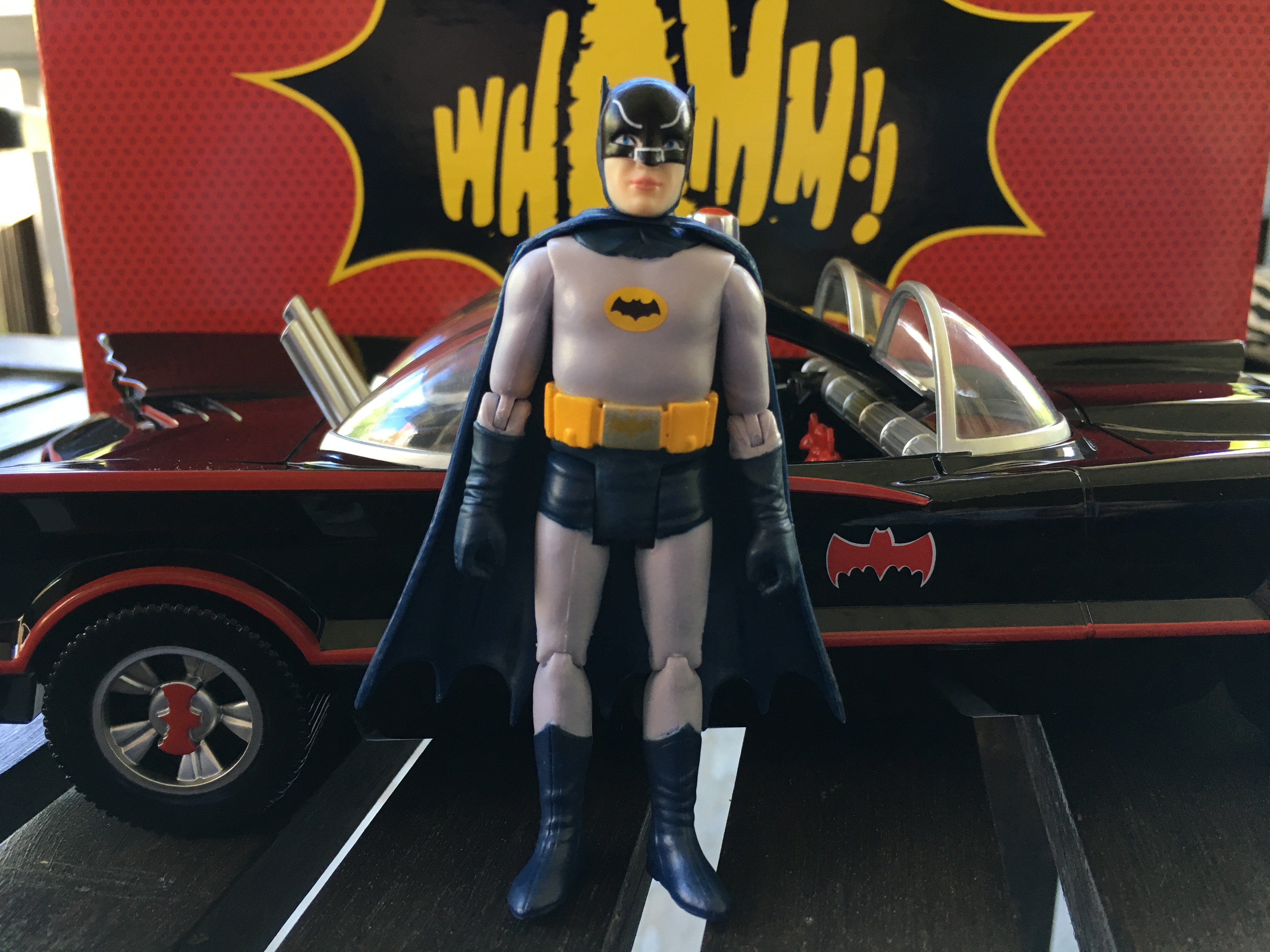 9. The Great: Robin’s outfit is outstanding. The color, again, is on the money. He also looks like Burt Ward, with his sideswept, brown hair.

10. The Quibble: Though his face strongly resembles Ward, yes, the eyes are set a little too far apart. Again, that’s the definition of a quibble and it doesn’t really bother me. But I’ve seen it mentioned elsewhere, so I figured I’d address it. Overall, he looks great top to toe. 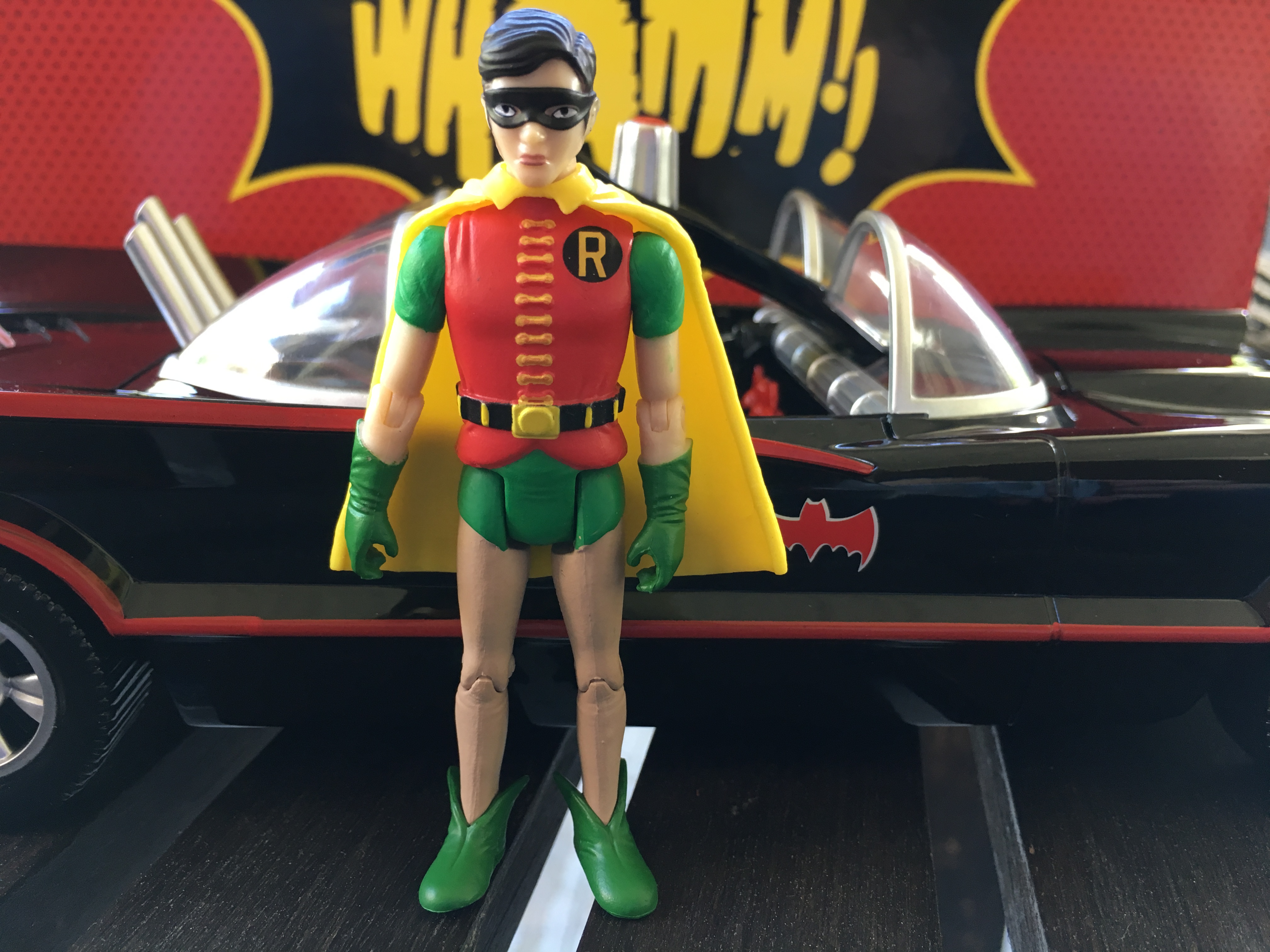 11. The Great: There are nine points of articulation — and the ball joints really work well. There are Batman ’66 figures out there that are far more expensive that don’t give you this level of playability — another reason Funko has a chance to surpass other action-figure lines. 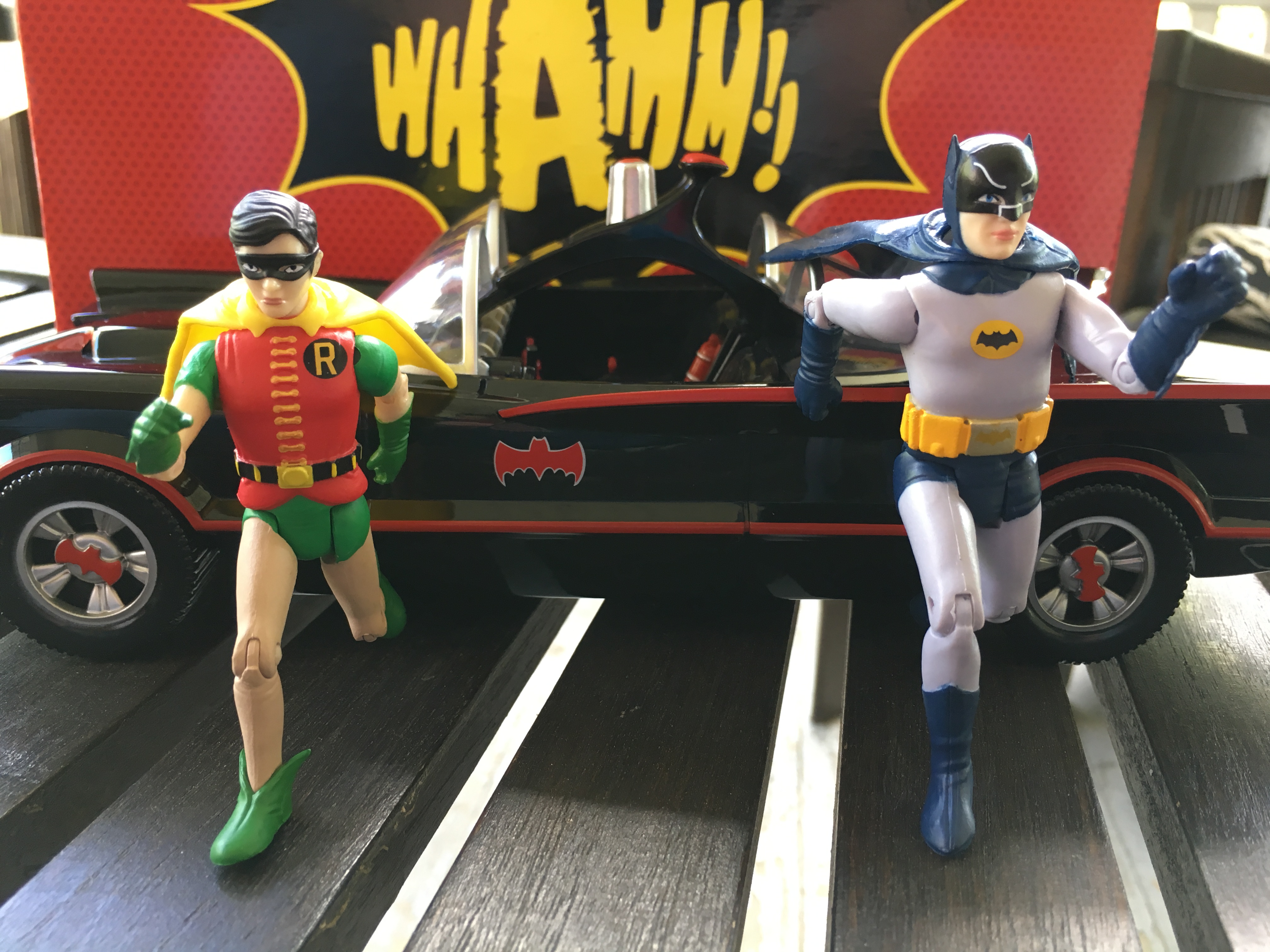 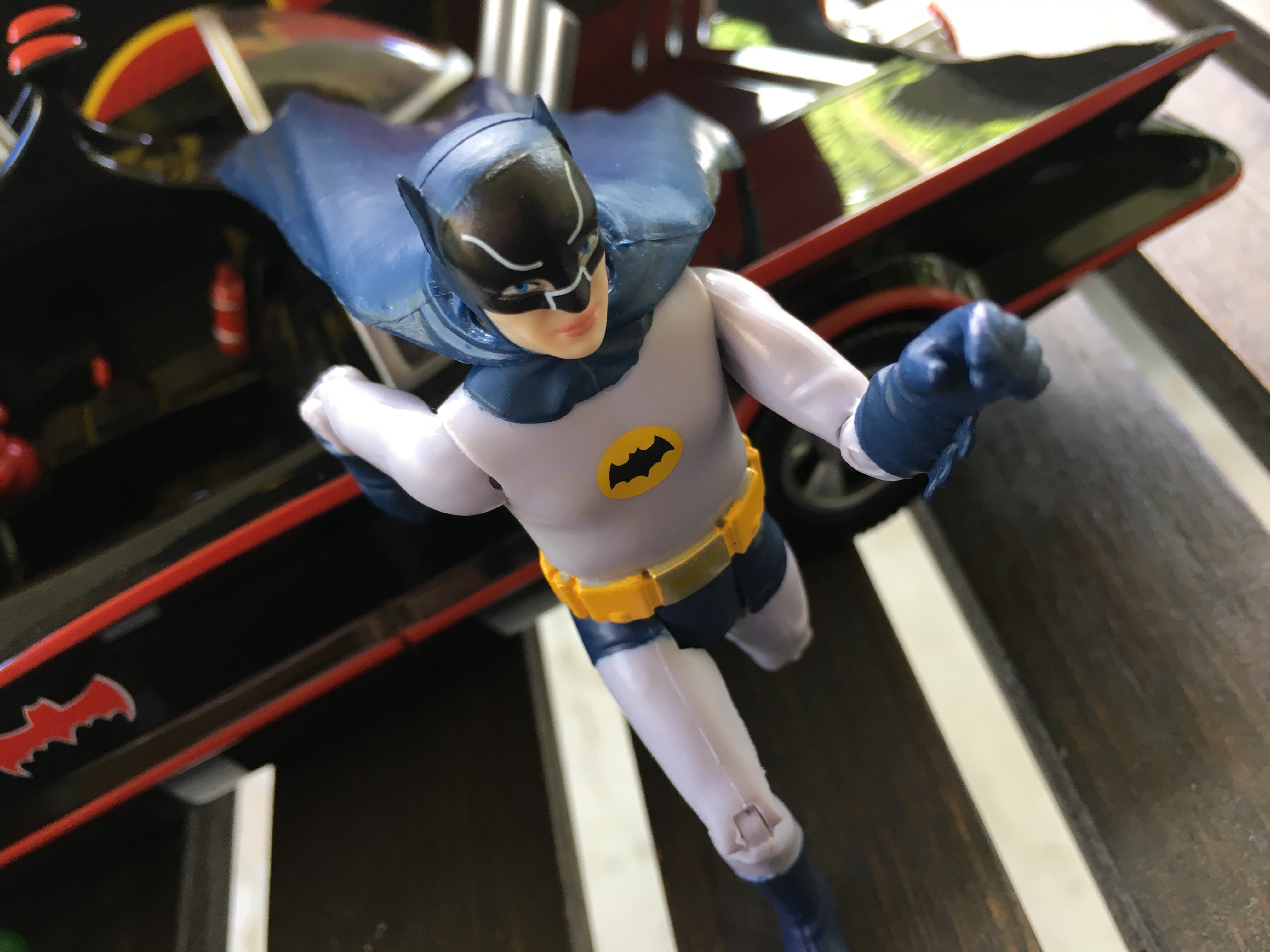 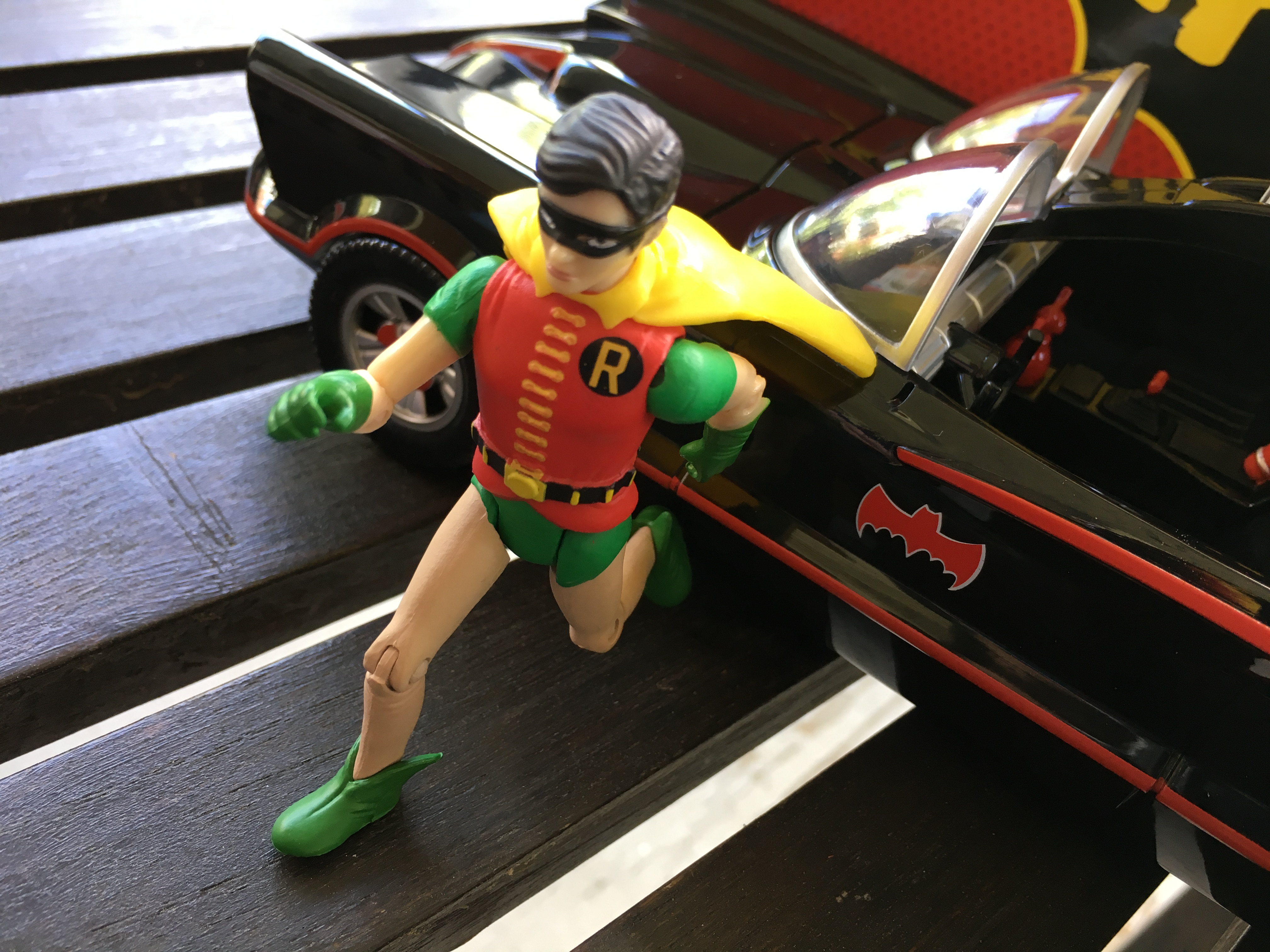 12. The Good: Ah, the capes. I saw the cloth-caped prototypes at Toy Fair. I see the plastic capes here. The plastic capes are far, far better looking. But it does make it more difficult to get them seated in the Batmobile. But that’s a trade-off I’ll make in a Bat-second. 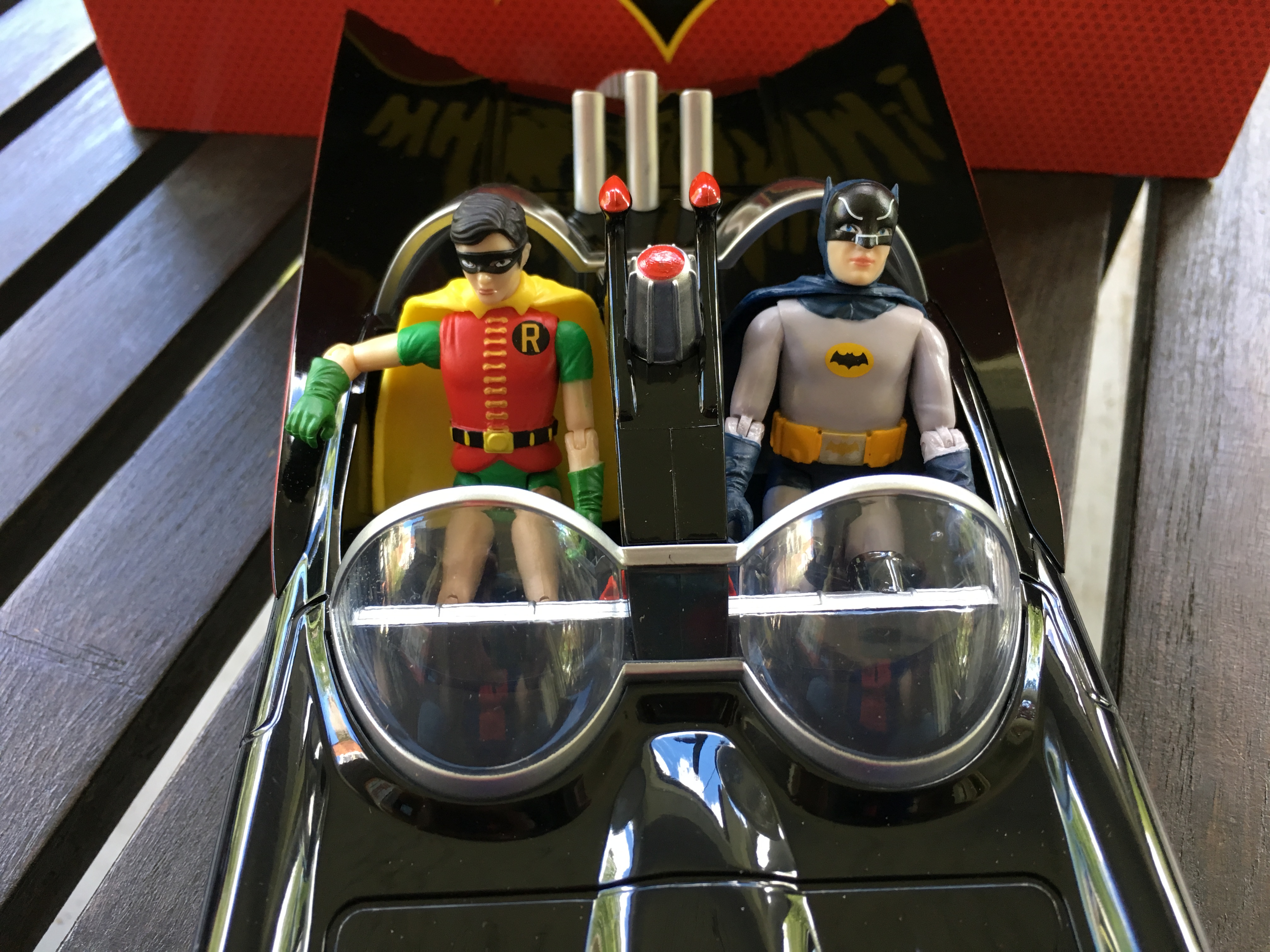 13. The Great. This is an excellent value. $40 for the set. The Batman ’66 singles will be about $10 each, depending on where you get them. That means you get two, $10 figures and a $20 Batmobile. I’ll take that in a heartbeat. And I absolutely cannot wait to see the Wave 1 singles — which will be here in just a few more weeks. (Click here.) 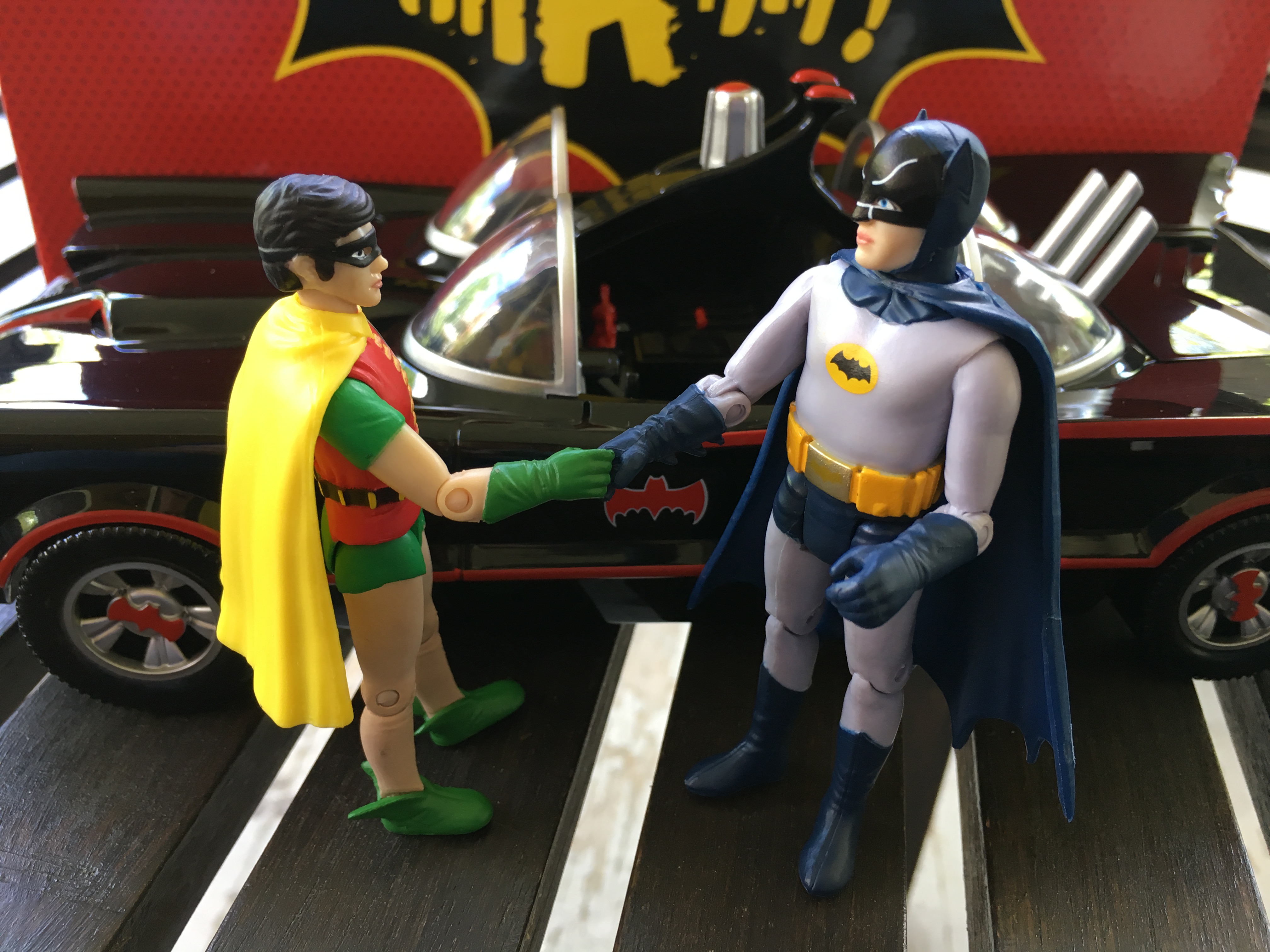 The complete Wave 1 of figures is due in June. Click here for details.

For a great photo gallery of the Batmobile with Batman and Robin, click here.