FUNKO BATMAN ’66 WAVE 1: The Great, the Good and the Quibbles

REVIEW: The full wave is out — and here are 13 QUICK THOUGHTS:

I’ve been saying for months that Funko’s Batman ’66 3.75-inch series has the chance to be the show’s definitive action-figure line and here we are, with the first full wave released within days of Adam West’s death.

A coincidence to be sure, given that these figures actually started shipping before the news broke. But fans of his Caped Crusader have an opportunity to celebrate his legacy in a particularly tangible way this summer, with new miniatures of Batman (two kinds), Batgirl, Catwoman, Mr. Freeze (two kinds), King Tut and Bookworm. Not to mention the Batmobile, which came out a couple of weeks ago, with Batman and Robin included (click here).

So fire up your Blu-ray player or iTunes with your favorite Batman ’66 episode, and check out this full review of Funko’s Wave 1 figures. As we did with the Batmobile set (click here), here are 13 QUICK THOUGHTS: The Great, the Good and the Quibbles:

1. The Great: For a lot of fans, the Batman chase figure — aka Screen Test Batman — is the big get of the wave: A first-ever action figure depicting Adam West’s (and Lyle Waggoner’s) test-footage outfit. This is one of the best indications that Funko is serious about doing a deep dive with this line. The company is known for its variant and chase figures — I’ve already seen this one for sale for about $50 on eBay — and so I expect we’ll have a number of neat and unexpected figures in subsequent waves.

At least I hope there are subsequent waves. It’s pretty clear there will be a second one — there’s no way the Joker, Penguin and Riddler aren’t coming — but sales will determine the long-term commitment to this series. (So if you dig these like I do, buy! Buy!! BUY!!! Especially from retailers.)

I stopped dead in my tracks when I saw this figure at Toy Fair and the final version’s naturally much slicker. Like the main Batman single, he comes with a Bat-communicator accessory. 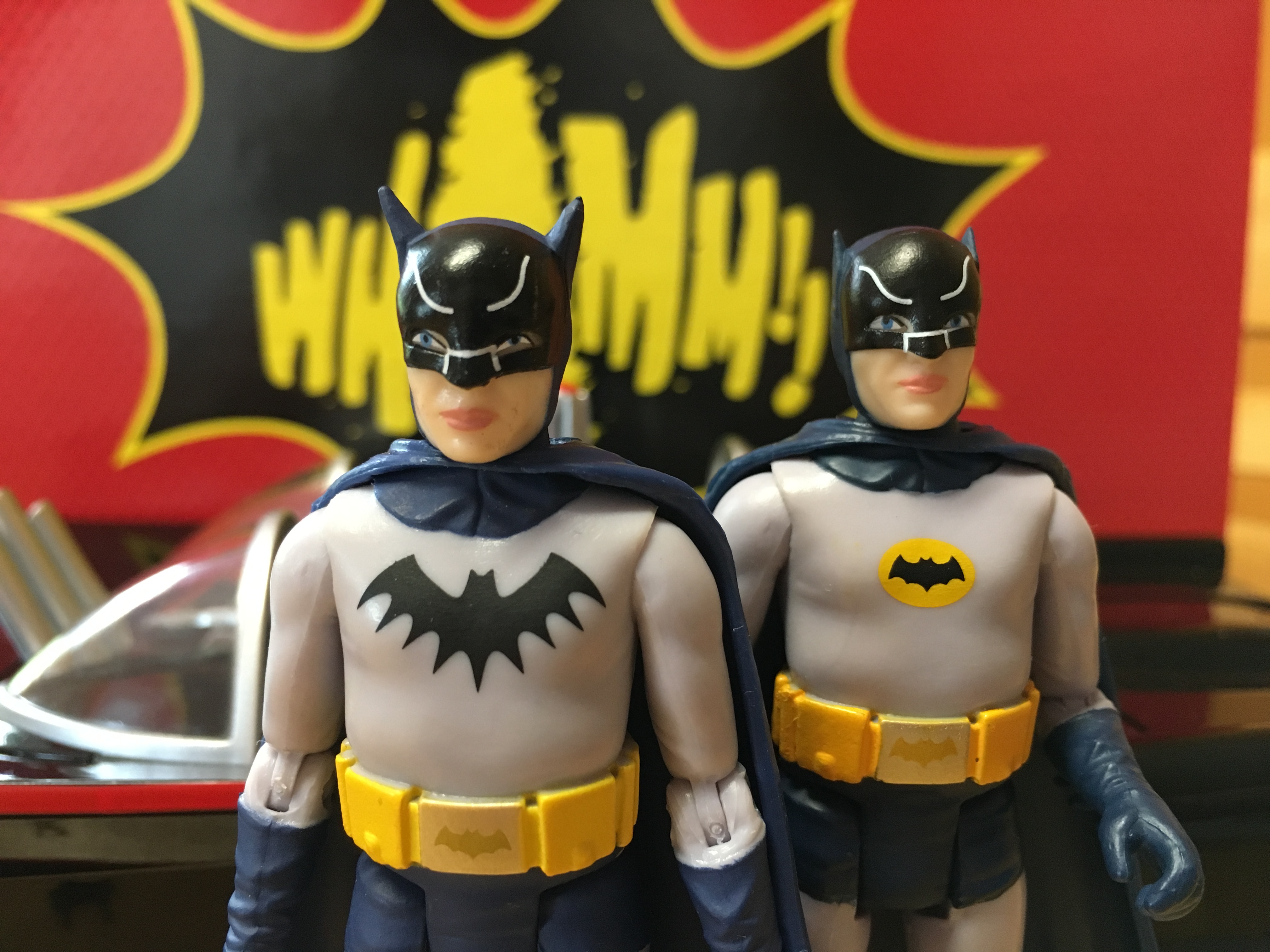 2. The Great: What I also love is that this isn’t just a repaint of the primary Batman figure. That would have been really easy to do but Funko took the extra step of following through and changing the heads. This one’s mask has longer, more askew ears, as we saw in that test footage. Outstanding.

3. The Quibble: The eyebrows, man. Funko has gotten so many tiny details right with these figures that it just seems so strange to me that Batman’s eyebrows would be so long and so vertical. (I noted this here, as well.) This has to be a production issue because the Toy Fair prototype and all the official concept art we’ve shown off here at 13th Dimension have it right. I really would like to see a subsequent reissue of the Batman figure in a future wave that fixes this. But that’s the only thing keeping the Batman figs from being an A+. 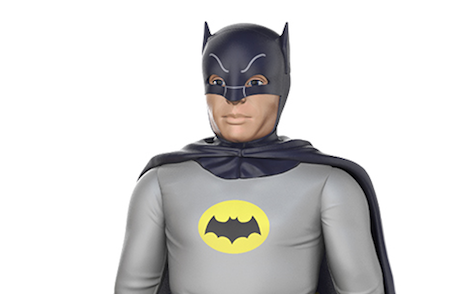 4. The Great: It’s hard for me to decide which figure is the tops of this initial wave of singles: this Mr. Freeze chase figure — alias Eli Wallach Mr. Freeze — or Screen Test Batman. But I think when all is said and done, it’s this one, if for no reason that it was such a complete surprise at Toy Fair. Wallach was not part of the overall Batman ’66 merchandising license, but Funko managed to get this done. That makes this unique among all the Batman ’66 collectibles out there: There is no other Wallach Freeze memorabilia. What this augurs for other likenesses not in the overall merch deal, time will tell. 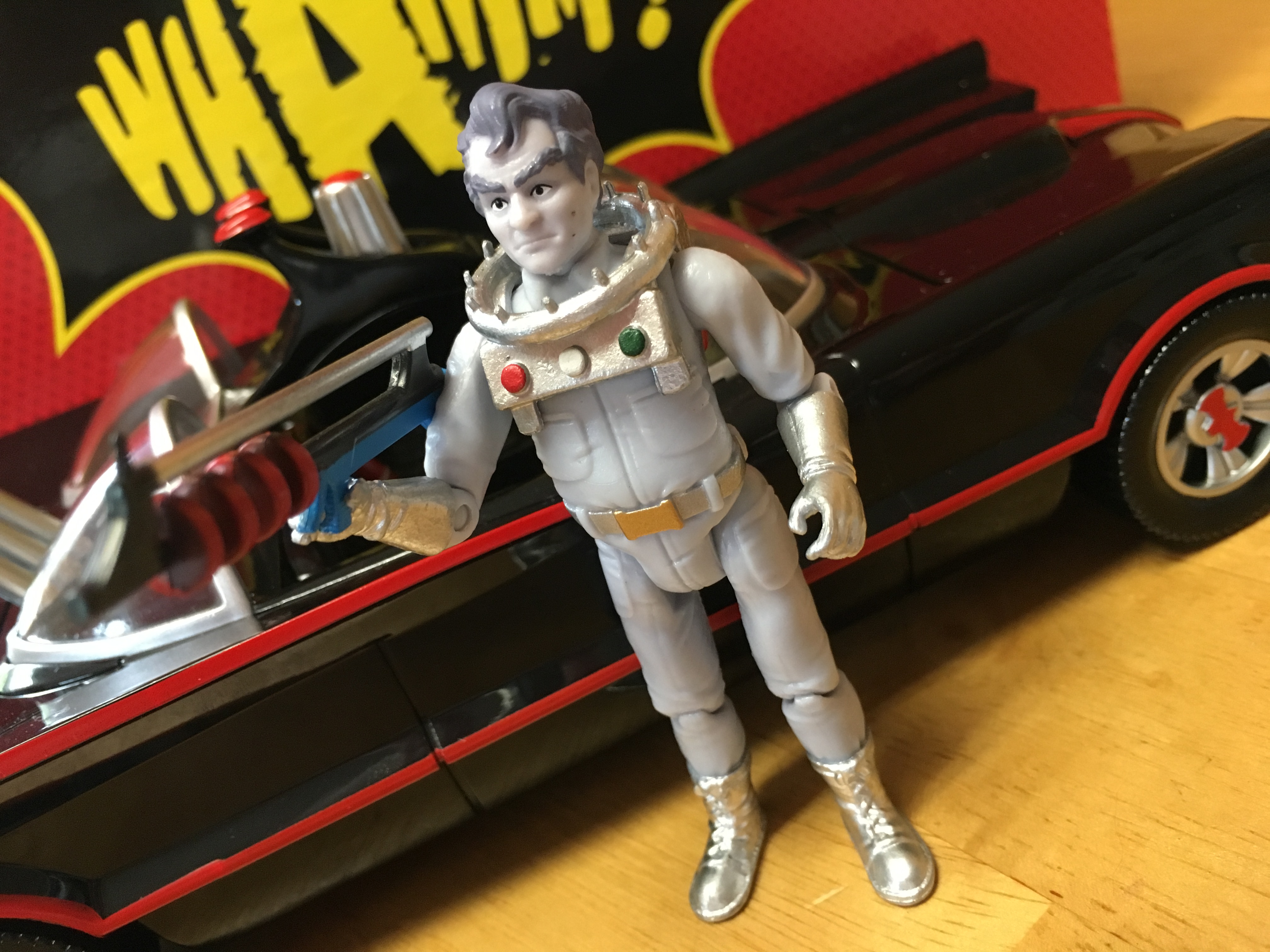 5. The Great: And it’s a terrific likeness, too, one of the best in this shrunken scale. Eli Wallach Mr. Freeze looks like the actor, with his bushy eyebrows and poofy hair. At the same time, it looks very much like a toy, occupying that happy spot in the nexus between don’t-breathe-on-it collectible and childlike plaything. And he comes with a freeze gun, too. 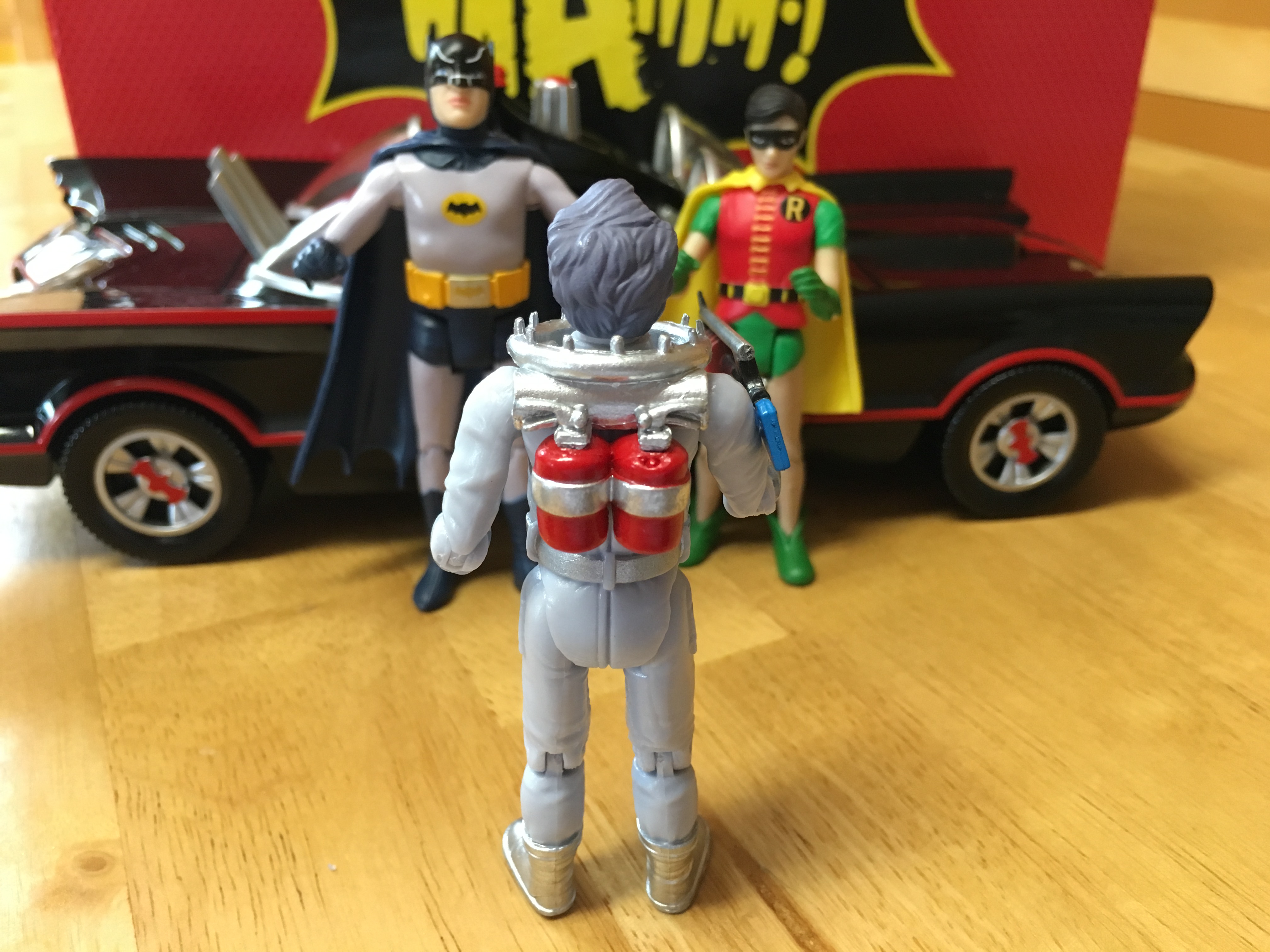 6. The Good: I’ve not yet picked up the main Otto Preminger version of Mr. Freeze, which is my fave-looking of all the Misters Freeze from the show. I’ll update this once I do. It’s worth noting that it’s the same exact figure as Wallach, only with a different head. Makes sense: They wore the same outfit. 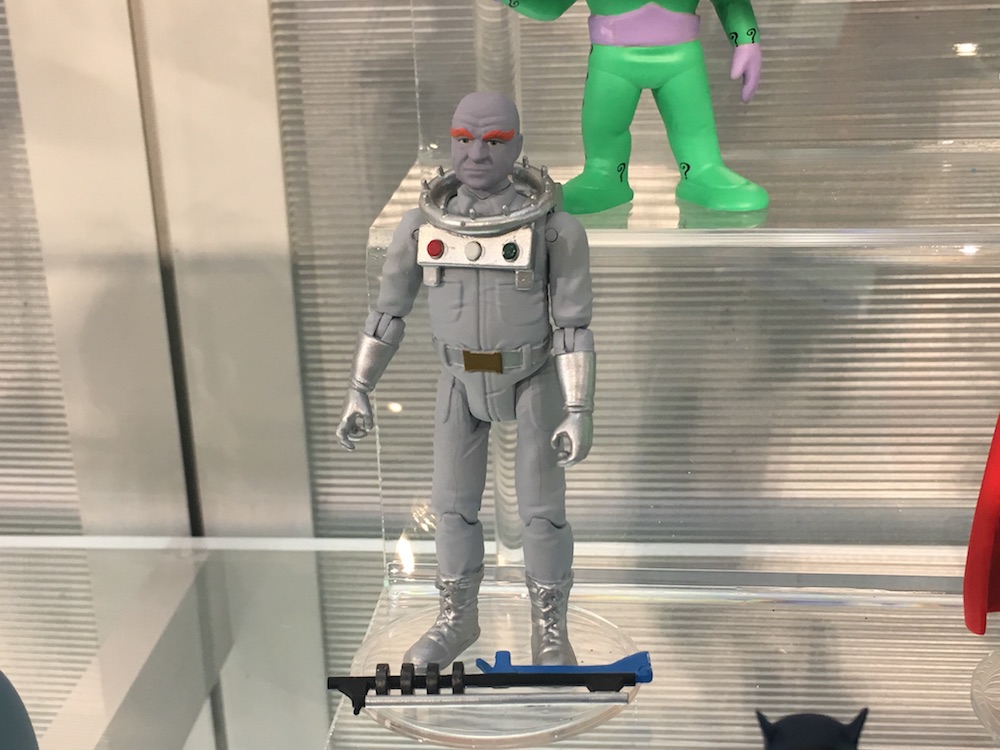 7. The Good: I have mixed feelings about the Julie Newmar Catwoman figure. The outfit is great, with that black texture, and the ears and hairstyle work. Some fans have beefed about her somewhat squat physique — Newmar is long-legged and the definition of statuesque — but I think that’s foolish. Capturing Newmar’s build in a 3.75-inch scale requires cutting corners and I think Funko did an admirable job. (Dig the Cat-Dart Gun.) 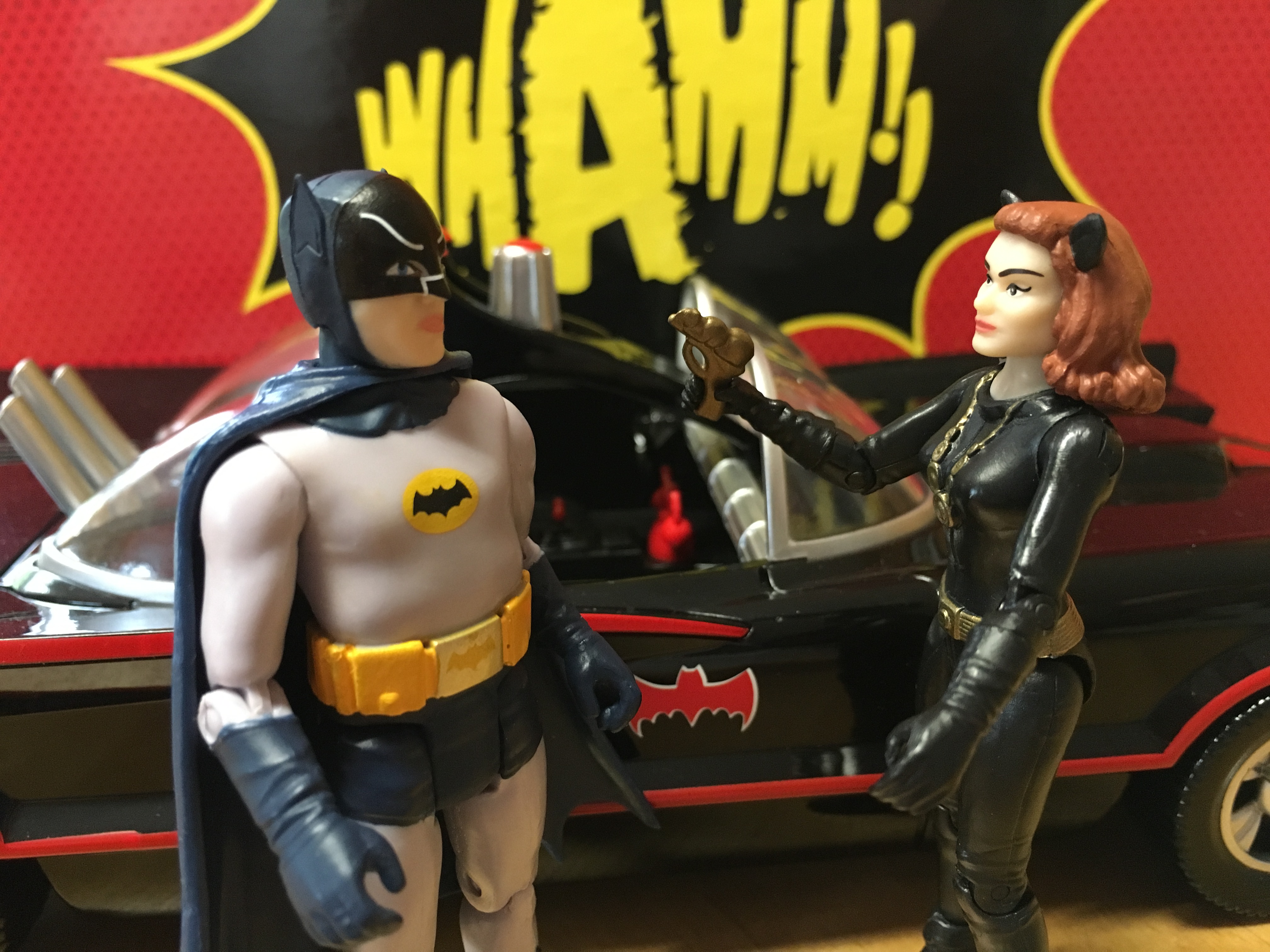 “Hold it right there, Batman …” 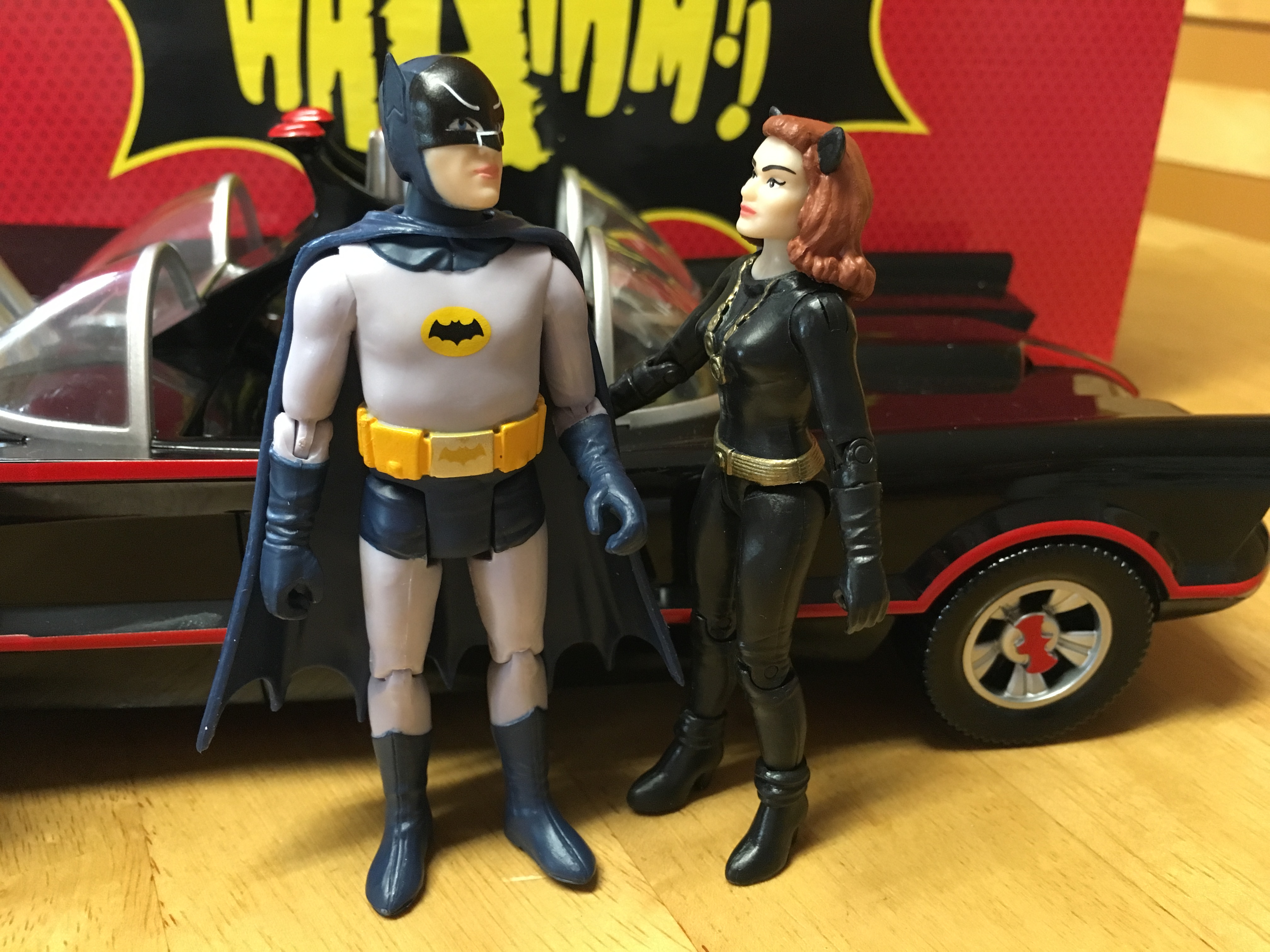 “Don’t you know we could be king and queen of crime … together?”

8. The Quibble: It’s her likeness that puts me off a little bit. You really have to thread the needle at this scale. We’ve seen concept art of her with the mask on — on the back of the Batmobile box and here at 13th Dimension — and I think that would be an improvement. Here’s hoping that version shows up at some point.

9. The Great: The Batgirl figure is a triumph — perhaps the best Yvonne Craig Batgirl figure we’ve seen to date. It’s interesting: Few companies have been able to really capture Craig’s distinct face — the high cheekbones, the proud, narrow jaw. Often she comes off looking like she sucked on a lemon. But not here. Action figures in masks always have an advantage, and this one really works. I was even a mite concerned when I saw her Toy Fair — she looked so sad! But in the production process, she’s come through with the standard resting face without looking glum. If you’re not going with smiling action figures, this is the next best thing. And her outfit works too, all contrasting purples and golds. Great work all the way around. 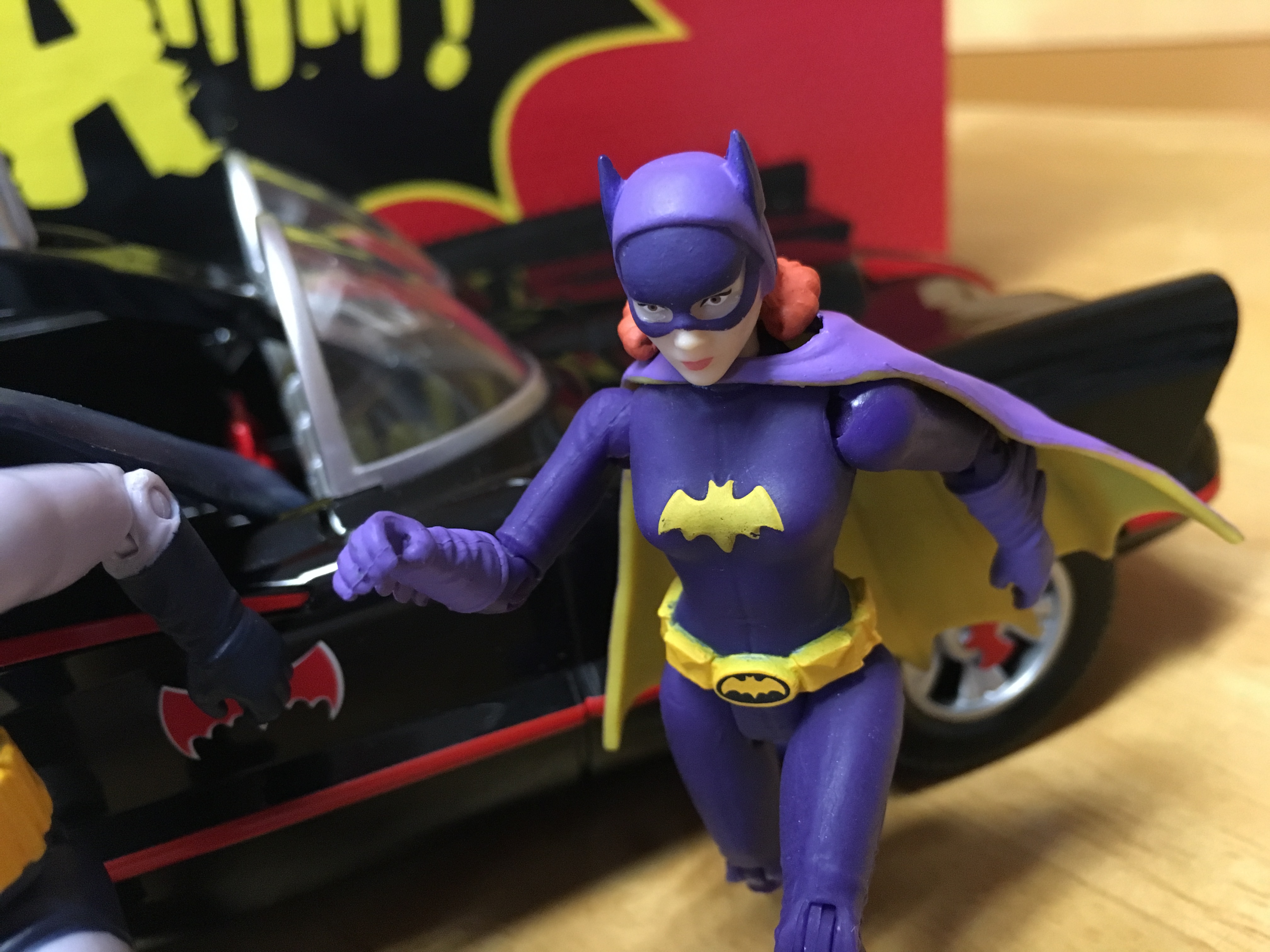 10. The Quibble: Not much can be done about this but the radio accessory is unnecessary. And it doesn’t really fit in her delicate hand well. But unlike the Dynamic Duo, Batgirl wasn’t particularly gadgety, so what else was there to do? Give her a Charlie the Parakeet? Actually… 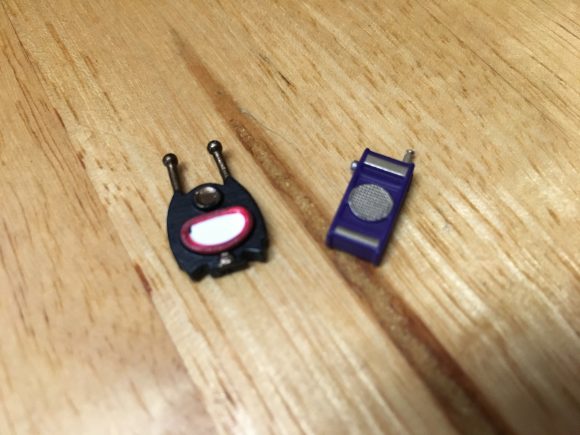 The Bat-Communicator and Batgirl’s two-way radio

11. The Good: I almost feel bad for saying this since I know a lot of the Funko people really dig King Tut, but this figure isn’t quite as strong as some of the others. Which is not to say that it’s not good, because it very much is. The outfit is terrific, for sure, complete with his pharaoh’s crook and flail. And he resembles Victor Buono. He just lacks that lunatic glint in his eyes that Buono pulled off so well. That should be filed under “Quibble” though, because this is a fine figure. 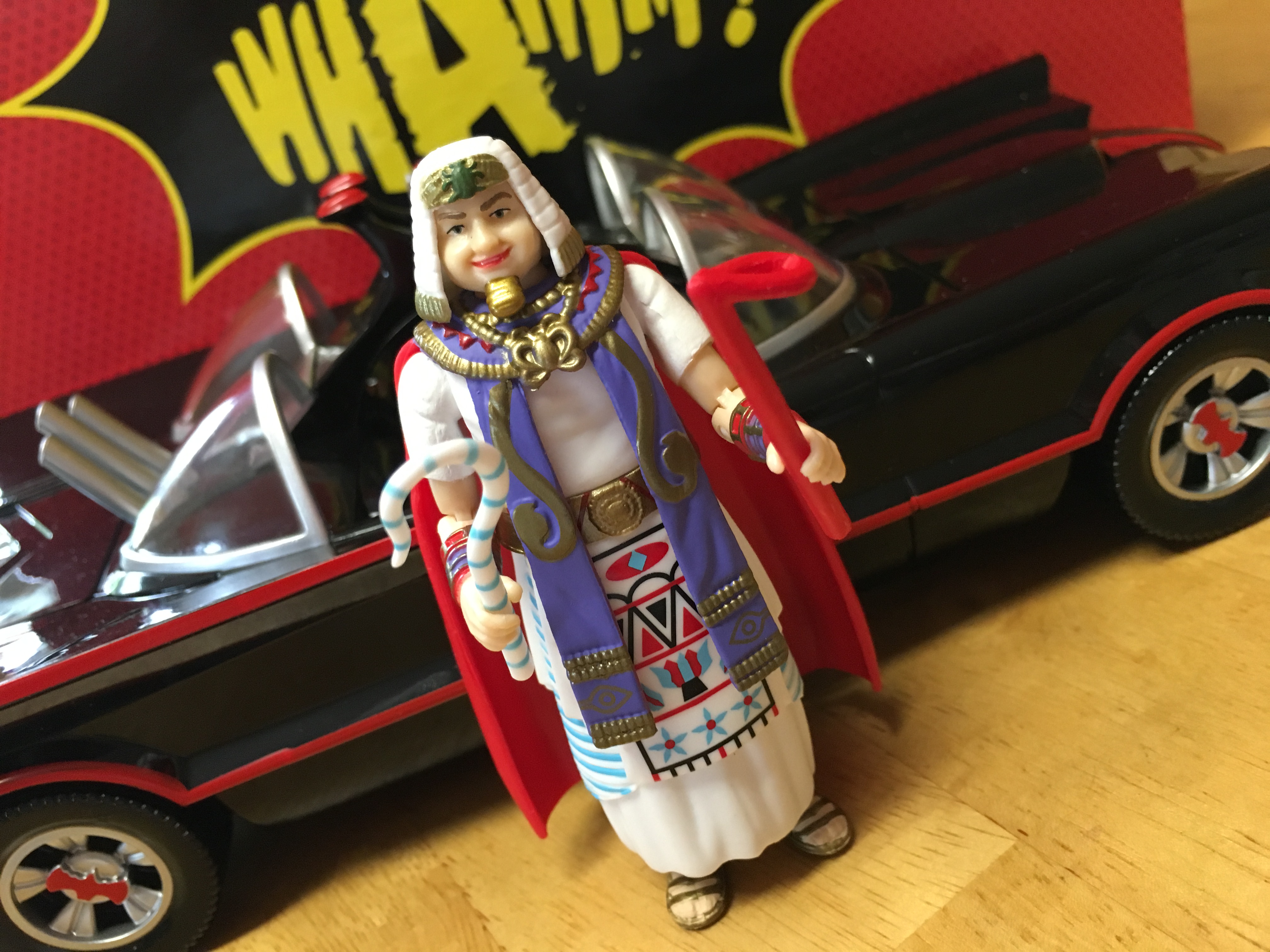 12. The Great: Look, I just never dug Bookworm all that much. I think his episode is an off-note in an otherwise terrific first season. He was unhinged yes, but I never bought a sense of menace. Nevertheless, Roddy McDowall’s estate signed onto the merch deal, so Bookworm’s easily available to manufacturers. I look at him as a completist: If I’m getting all the others, I might as well get Bookworm, too.

Taking all that into account though, this figure is superb: He really looks like Roddy McDowall. Just look at that face. And check out the delicate work that went into his glasses (not to mention his reading light). Funko would have been forgiven for simply sculpting molded glasses and painting in his eyes. But they went the extra step with the plastic lenses and it adds a whole new dimension. Terrific work. (Comes with a book, of course.) 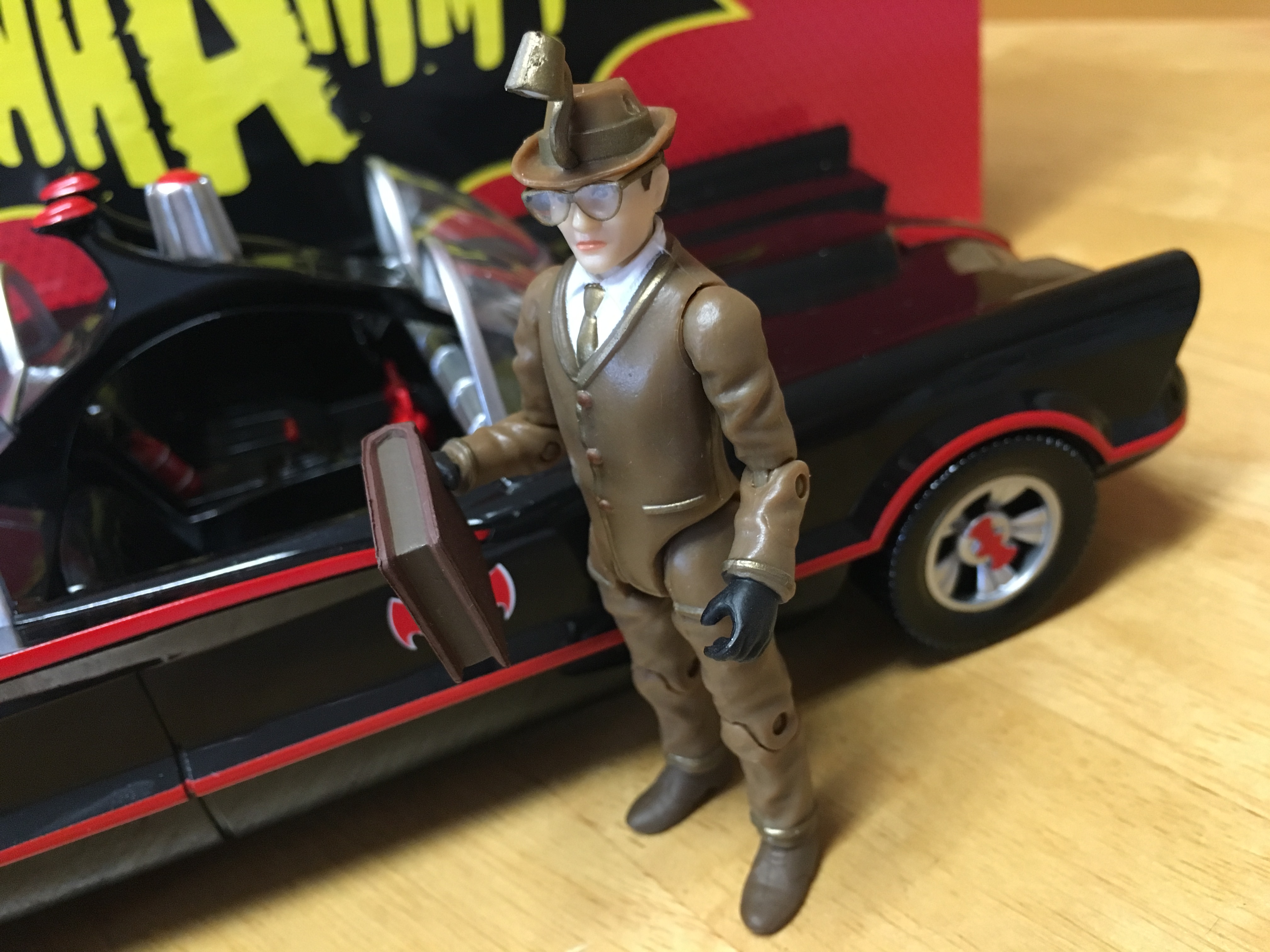 13: The Great: The line itself is outstanding and on the whole a great start to something that I hope will be with us for the next couple of years. We’ll be doing something soon again looking ahead to Wave 2 — in the meantime, check out what Funko’s top designer, Reis O’Brien, hinted at here.

The primary individual figures will run you $10-$13 each, depending on shipping, where you get them, and so on. (The Batmobile set, which is the only way to get Robin, is in the $40 ballpark.) If you’re lucky to score one of the chase figs at retail, do it. The secondary market’s expensive and you don’t want to encourage scalping. Each figure has nine points of articulation, which works for this scale, giving these folks a degree of poseability you don’t always see.