The boutique toy company fixes the past and makes the Mego(-like) Teen Titans figures available for a wide audience.

While I’m pretty proud of my Mego credentials, especially on the DC front, I completely missed the Teen Titans wave the first time around, in 1977.

No, it wasn’t until years after the prime Mego-collecting years of my youth that I was even aware that the company made the fabulous foursome for right against might in all their smaller-scale, 7-inch glory.

As an adult collector, I’ve long pined for Wonder Girl, Aqualad, Kid Flash and Speedy, but they’ve been well out of my price range given their scarcity.

Well, thanks to Figures Toy Company, here they are — the first non-Batman wave of characters the Tampa-based manufacturer has produced since getting the DC license. 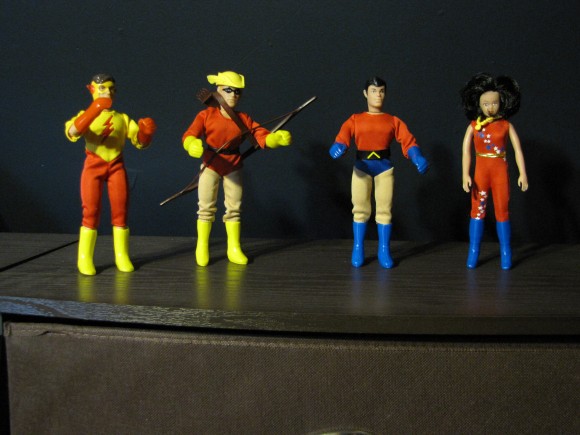 WONDER GIRL: Wondy comes in her second outfit, the late, lamented, star-spangled red jumpsuit that sent adolescent hearts racing faster than Ding-Dong Daddy’s Demon Dragster. Given FTC’s fealty to the original, we get “realistic” hair instead of a molded coif. Other than Batgirl, whose ‘do was aided by a blue Bathelmet, the female Mego characters all suffered the same follicular fate, giving them a less attractive look. But FTC is rightly determined to make their figures as close to the originals as possible, so they can’t be blamed for WG’s locks. Rather, they do a great job of replicating them.

KID FLASH: Twinkletoes is the one I looked forward to the most: His red and gold ensemble remains one of the most attractive and inspired in comics history — and he looks great here. Flasheroo and the other two male Titans were also the only DC Megos to utilize the molded plastic gloves instead of oven mitts or colored hands. FTC replicates the look to great effect here. He even has the rubberized lightning bolt! Side note: Kid Flash is the only original Mego sidekick without an adult counterpart. 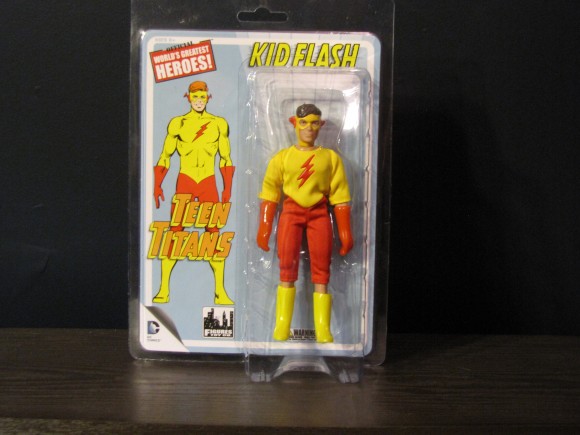 AQUALAD: The underrated Titan, Gillhead looks good, flesh-colored leggings and all. You can pair him with Aquaman, the swift and powerful monarch of the ocean, or set him up with the other Titans. Another figure I was really looking forward to and FTC made it worth the wait.

SPEEDY:The hotheaded Speedy-o was never my favorite Titan, though he was an essential part of the Filmation Teen Titans, whose adventures were notable for their snappy, Haney-esque repartee, absence of Robin, and notoriously off-model Kid Flash. But, again, you’d never know the difference between this Speedy and the original Mego. Which is to say, Figures Toy is right on target (even if the Mego Speedy had fleshtone legs instead of red tights.)

As far as the packaging goes, the cards emulate the originals’ generic sky blue while making it possible to open and shut them, like the FTC Retro figs before them.

Each is $25 and can be ordered directly from Figures Toy Company, or some of your more hip Internet dealers or, soon, hep local comic shops. Oh, and I can’t wait for FTC’s smaller-scale Robin, because … 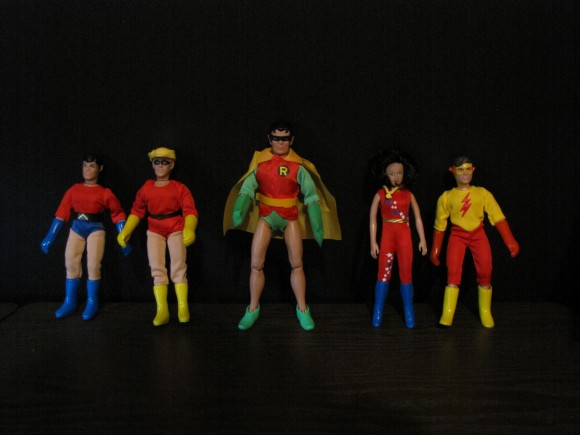