Supergirl, Batman and Harley are headed your way …

UPDATED 7/31/16: The Batman figure will hit most places 8/3, so check out the review below in case you missed it. Supergirl is out now. Harley Quinn is coming soon.

When the DC Collectibles Darwyn Cooke Designer Series figures were announced, I was pretty excited.

The original New Frontier series from DC never quite lived up to its promise because we never got the number of figures we’d want. No Aquaman or Robin, for example. Doctor Fate, yes, but Hourman, no.

Now, it seems, some gaps would be filled in, with characters that fit the New Frontier idea, joined by modern characters.

The first wave begins to arrive this week with a very Silver Age Supergirl. In the coming weeks, we’ll get a darker, Golden Age-inflected Batman and the first modern character in the line: Harley Quinn. (A modern version of Adam Strange was originally solicited for the wave but he’s nowhere on the packaging, so …) 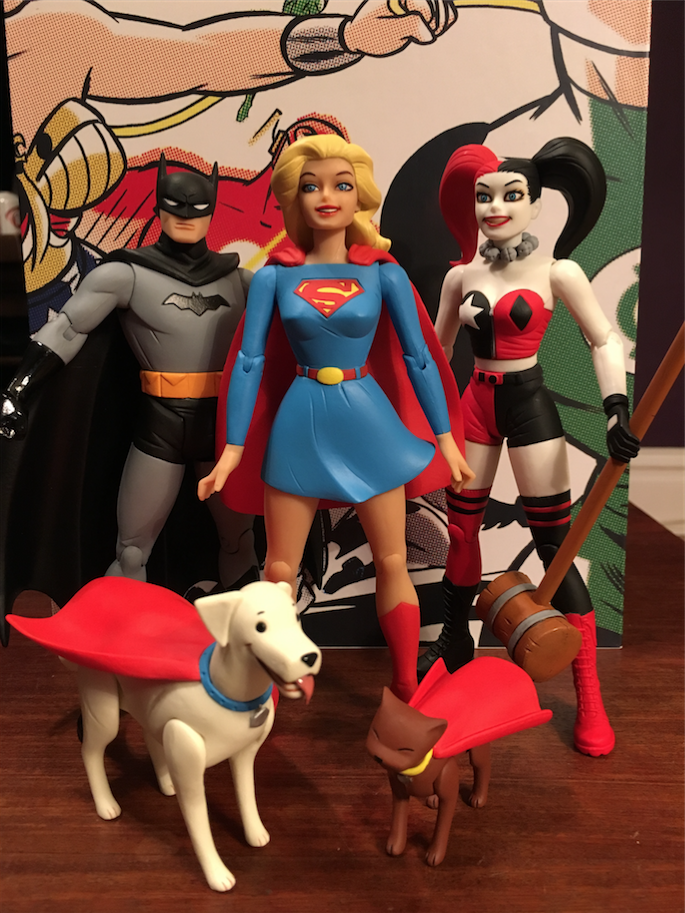 The figures are beautifully designed and crafted and are certain to brighten your shelves. At the same time, you can’t look at them without thinking that we recently lost an artist of such immense talent.

Not to be mawkish but I prefer to lean toward the joy, especially with …

I’m gonna just put this right out there: This is the best Supergirl figure I’ve ever seen. I can’t even think of one that even comes close. 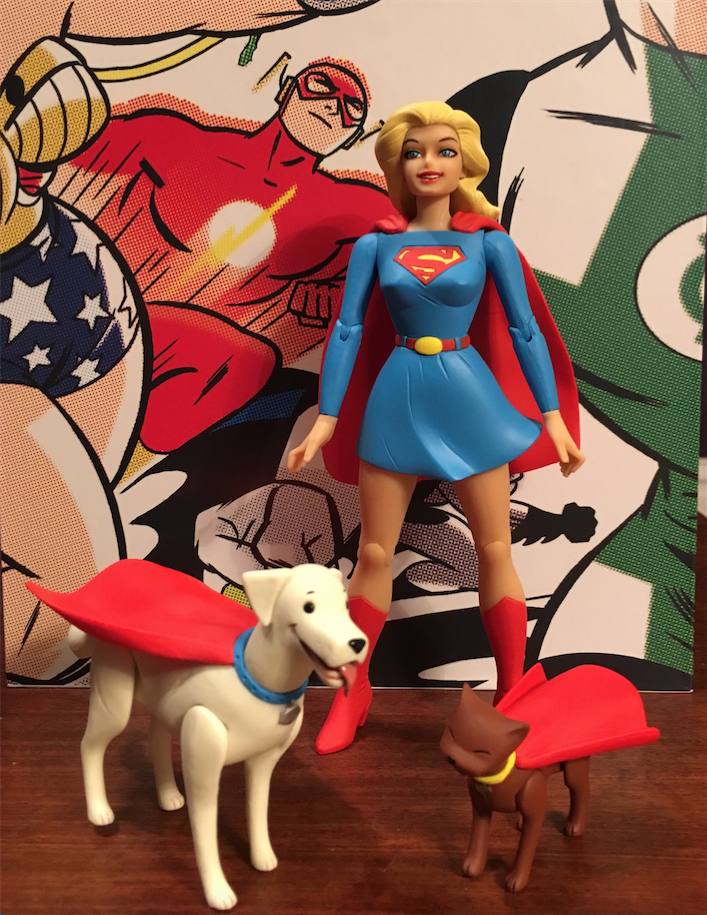 For one thing, there’s the brilliant smile and the hair blown back by the wind. Can an action figure have charisma? Because if it can, she does. 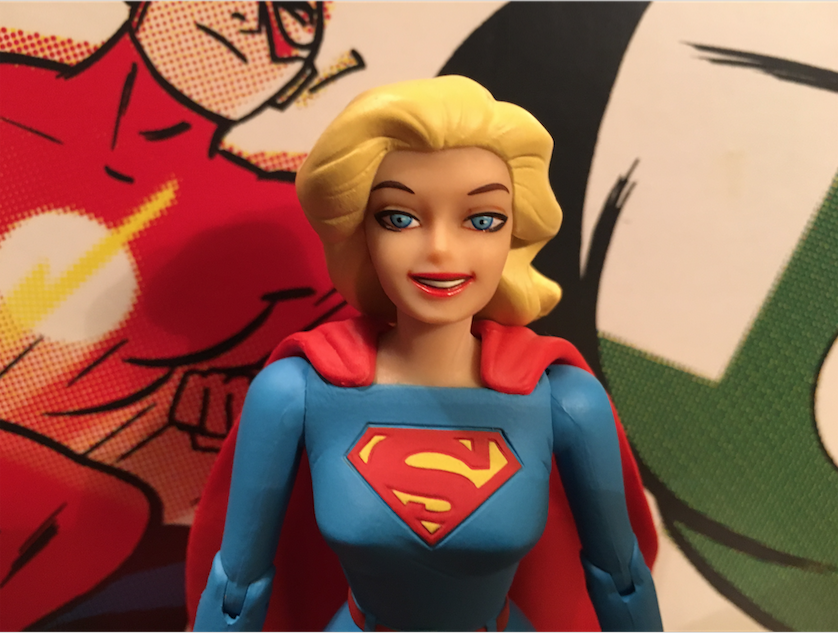 And how about Krypto and Streaky! And they’re articulated… 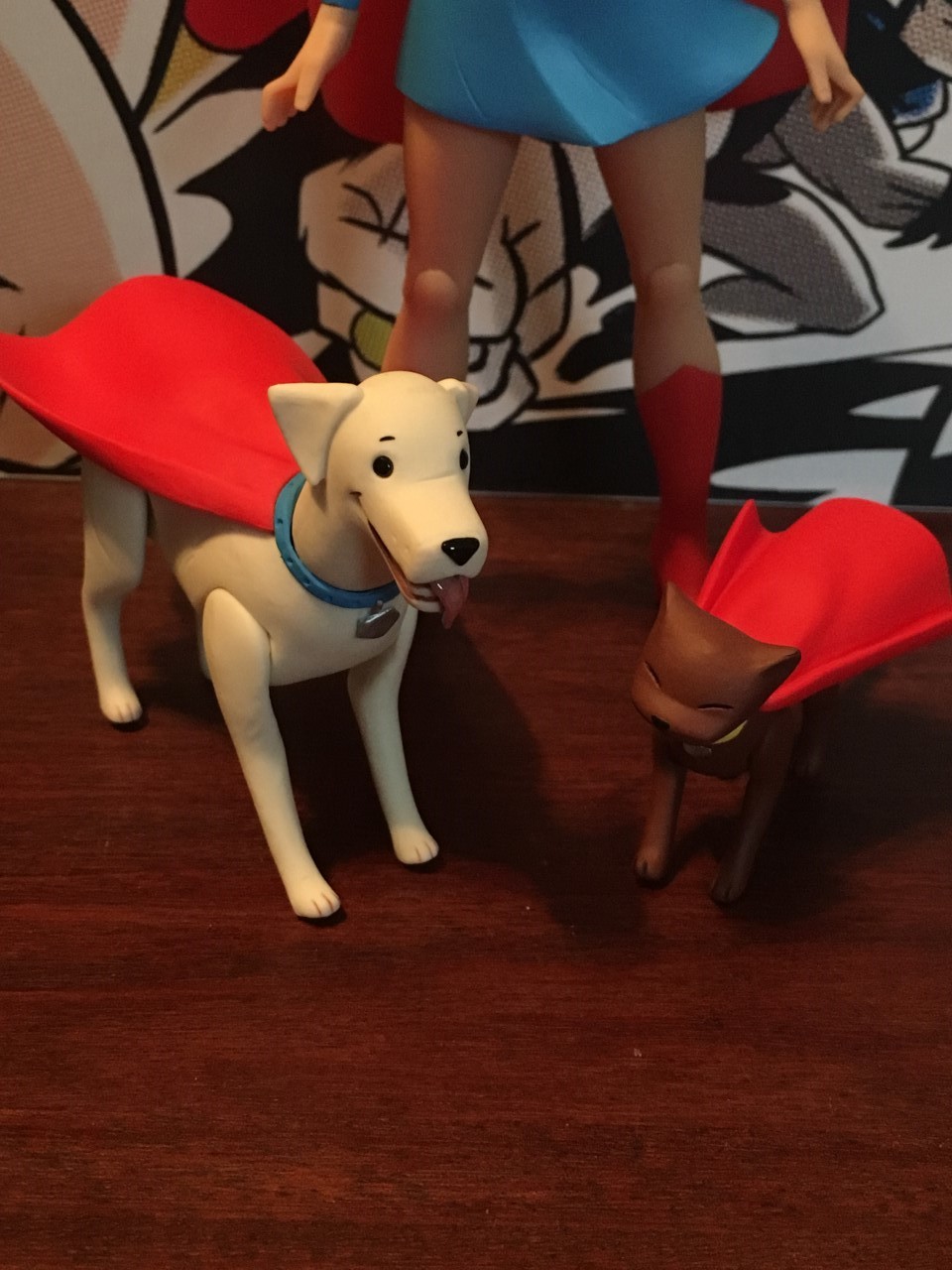 The only one missing is Comet. Otherwise, you could re-enact this scene: Over the last year, Cooke produced some covers for DC’s omnibus program, including collections for Golden Age Batman and Silver Age Supergirl. So it makes some sense that those versions of the characters made their way into the first wave of figures. 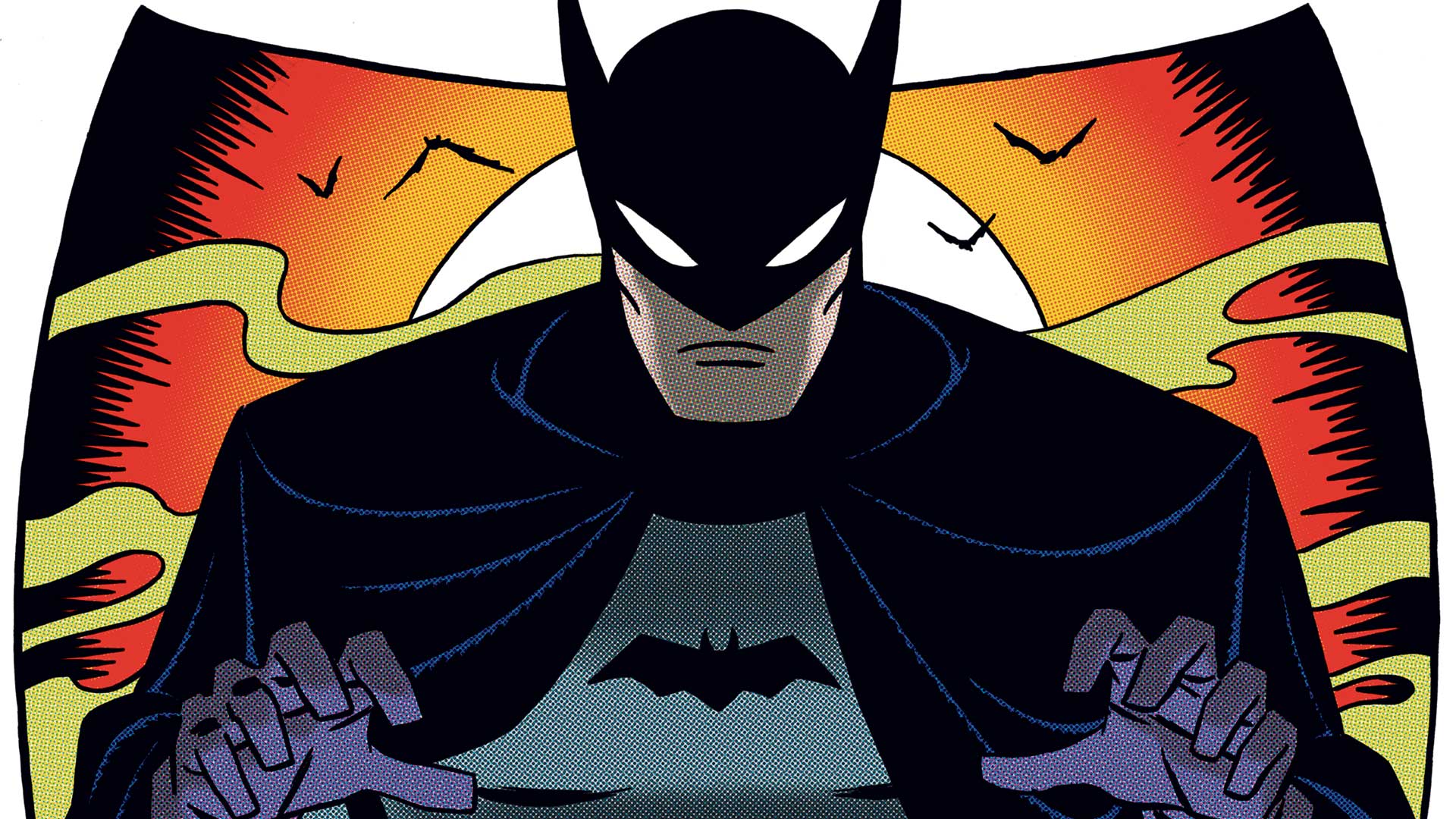 Of course, the real treat in getting this darker Batman is that it bookends the New Frontier Batman figure. Readers of the story know that Batman changed his look midway so as not to appear too threatening to the public — meta-commentary on what happened to the Caped Crusader from 1939 to the early ’60s.) I personally would have gone all in with the purple gloves, but who am I to argue? 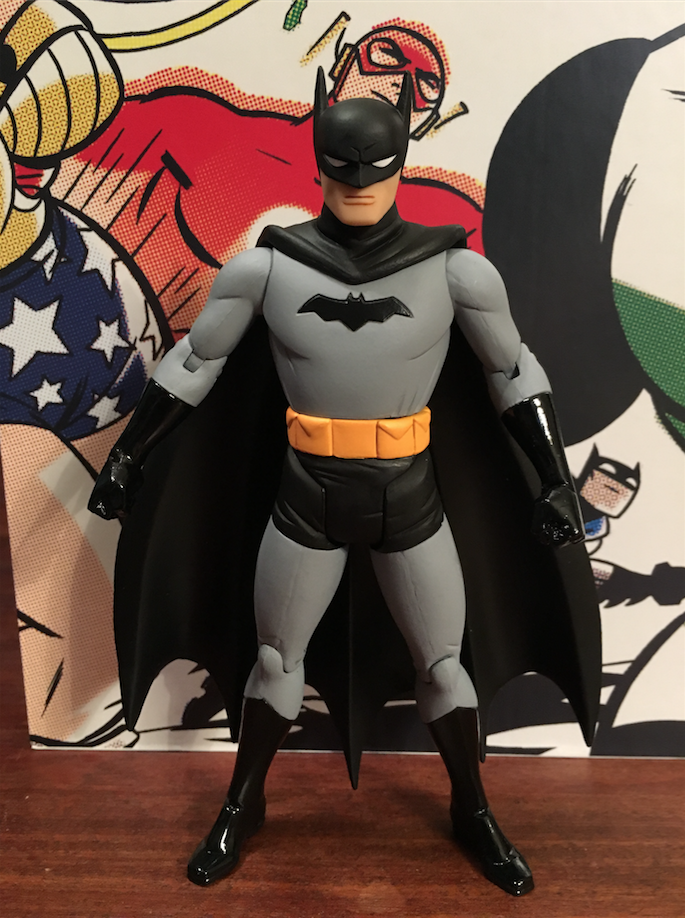 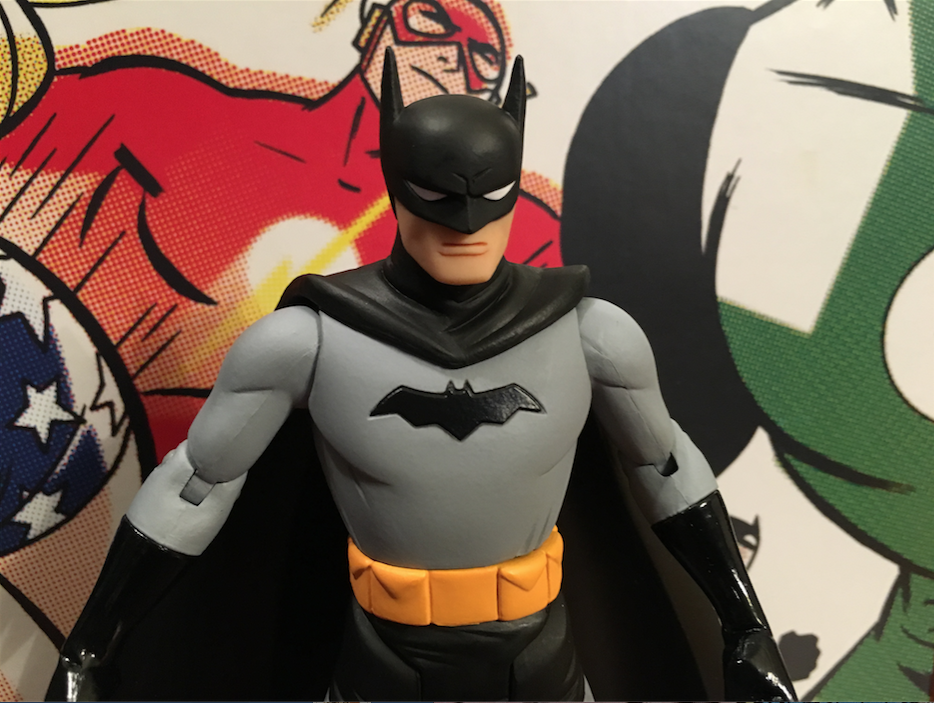 There are probably 50 characters I’d want to see before they produced Harley Quinn in this line, though I can’t really quarrel with the decision. She’s become a franchise in her own right so it only made sense to do it, especially with a movie coming out. 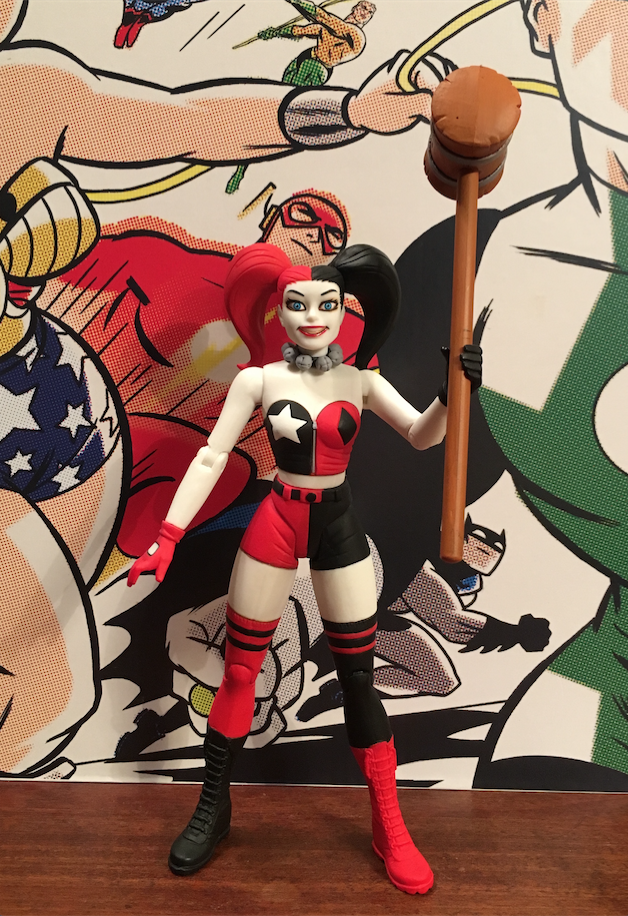 She comes with a mallet.

And it’s not that I dislike Harley or anything, it’s just that the figure, while perfectly fine, is a little too similar to what DC produced in its New 52 line — and will be producing again in its Amanda Conner line. 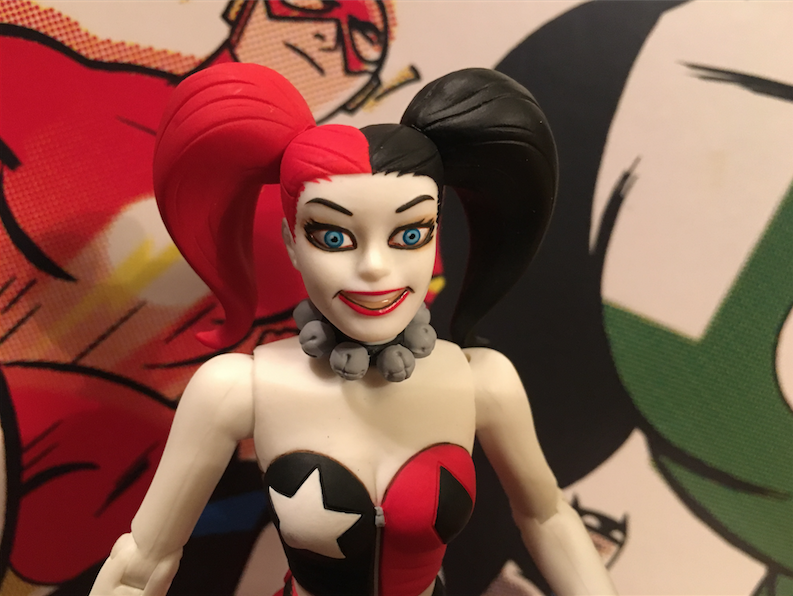 But commerce is commerce and she’s a good-looking figure.

The figures are in the 7-inch range and eschew much of the articulation DC has adopted of late. Basically, they’re articulated like the New Frontier line. As I noted, Supergirl is due 6/29 and the others are to follow in the coming weeks. Each will run about $28, depending on where you get them, so shop around. 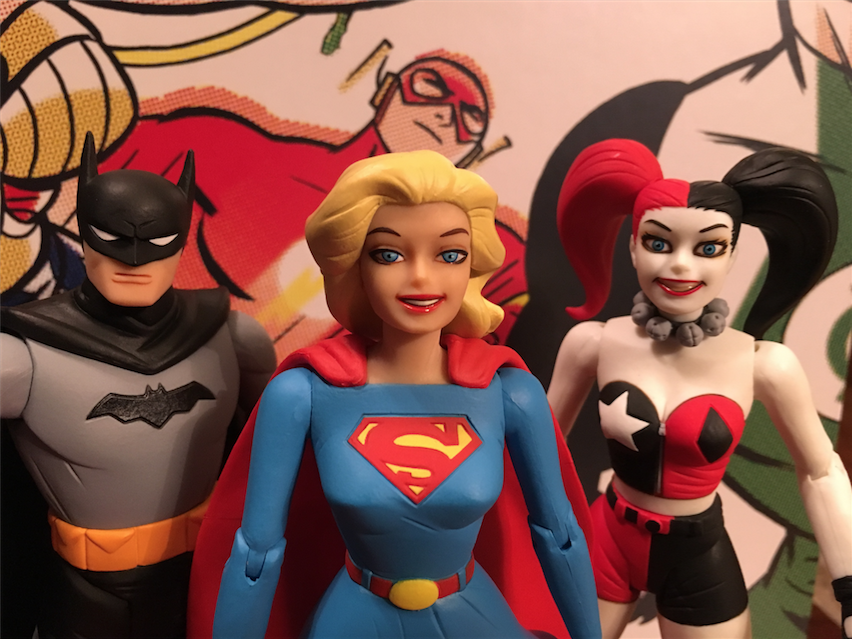 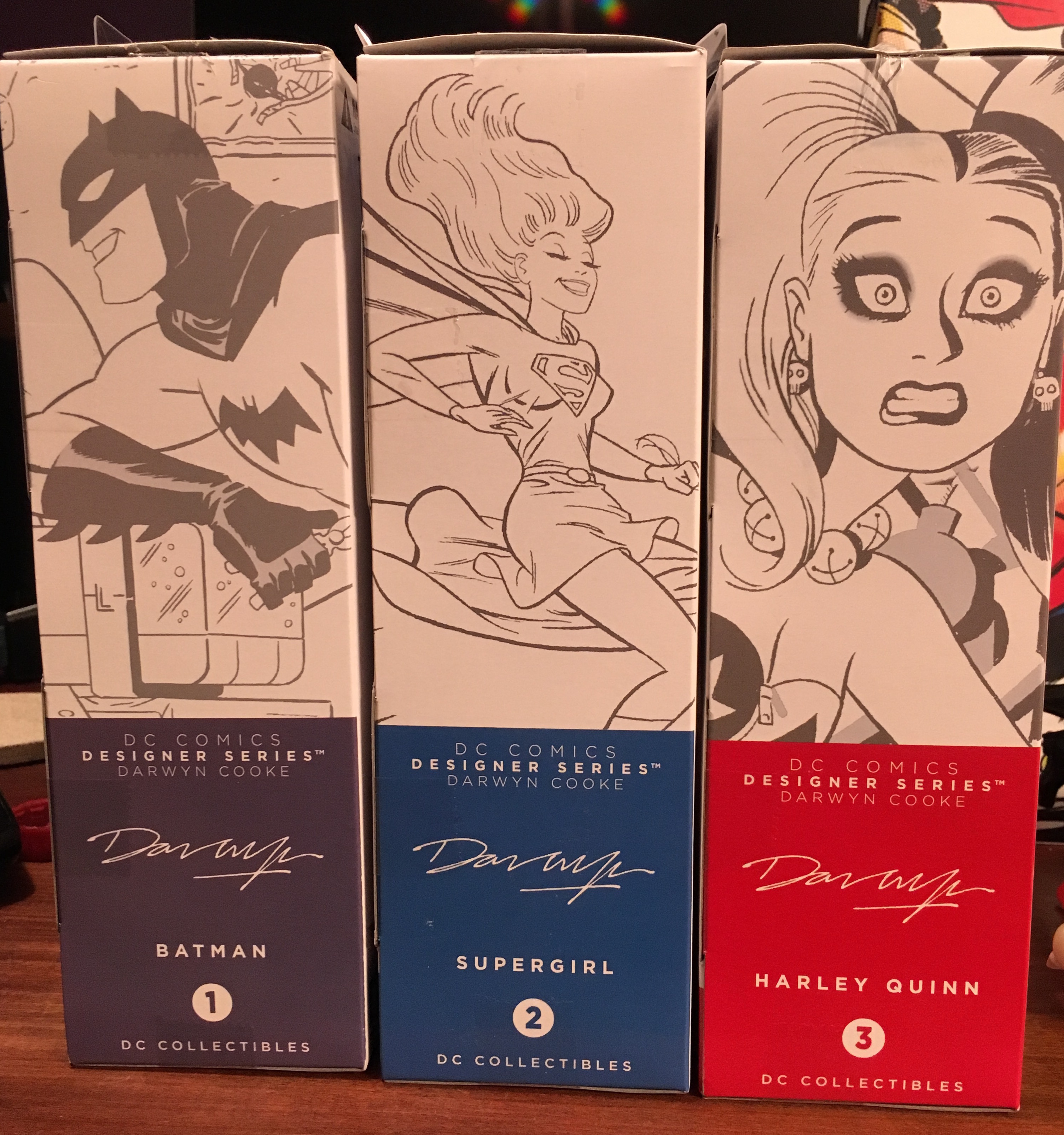 The sides of the boxes feature black-and-white art from the Darwyn Cooke variant-cover month from 2014.