Back in December during our TOYHEM! event, I chronicled my up-and-down quest for an original Mego Wayne Foundation playset (click here) — easily one of the biggest grails for many a collector. 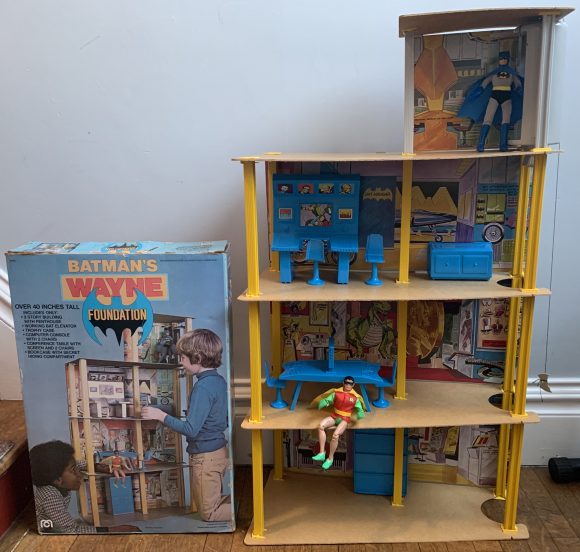 But instead of chasing eBay, maybe, just maybe, I should have waited a few more months — because customizer extraordinaire Anthony Durso, owner of The Toyroom, has reconfigured the classic Wayne Foundation for his new line of 8-inch-scale playsets.

Check out Anthony’s new Batcave “displayset” — based on Silver and Bronze Age concepts: 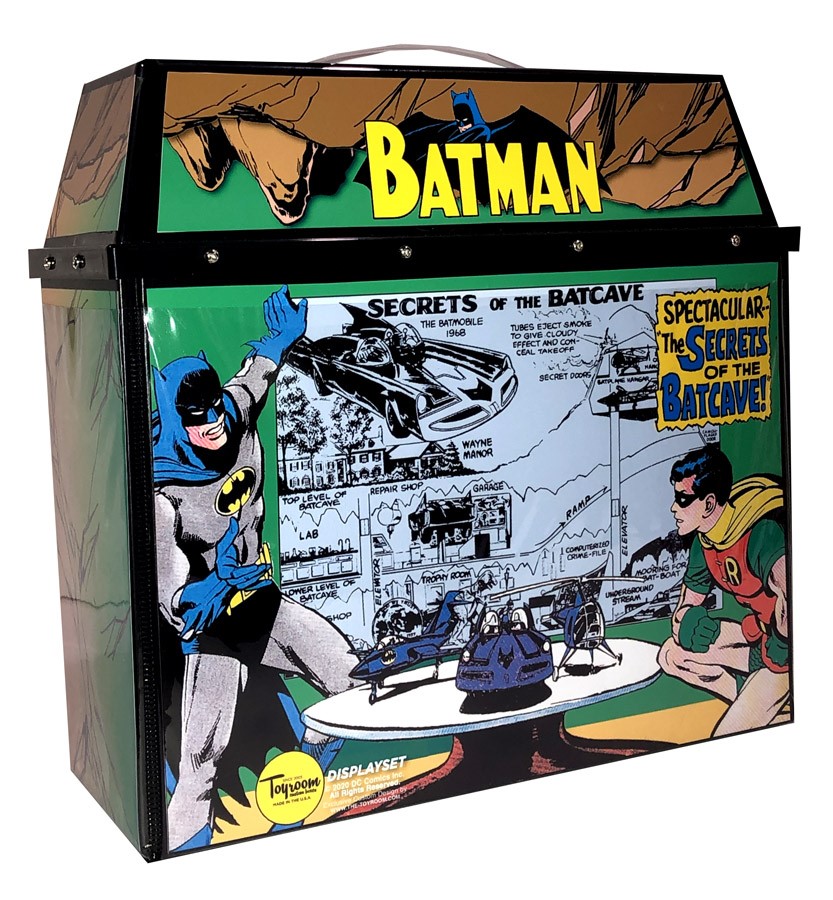 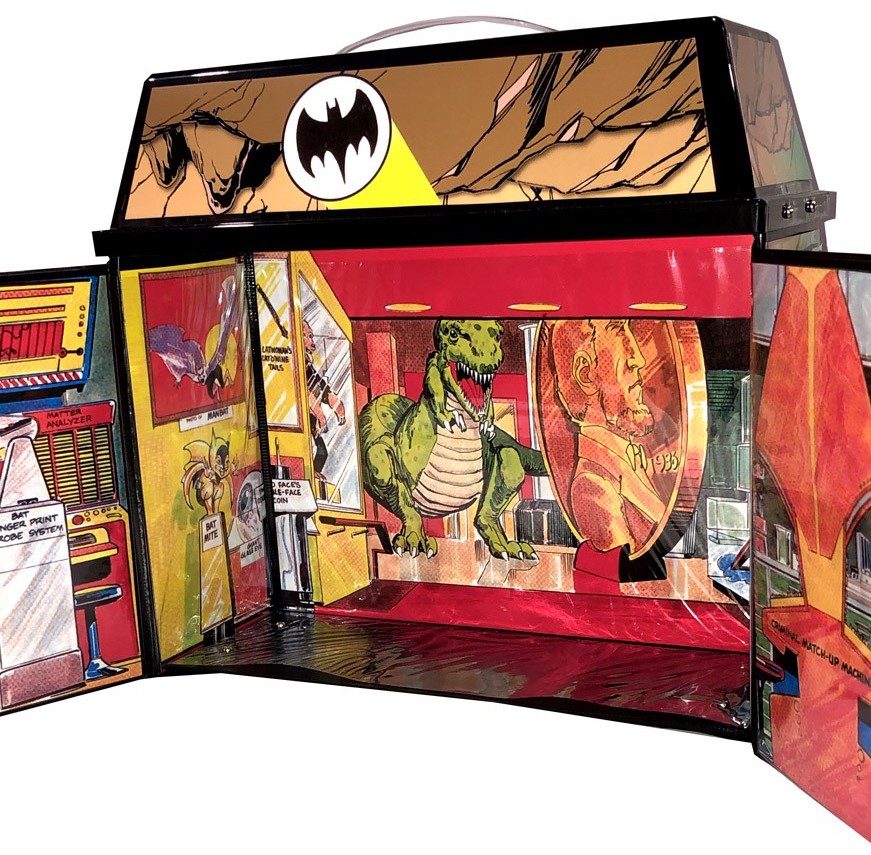 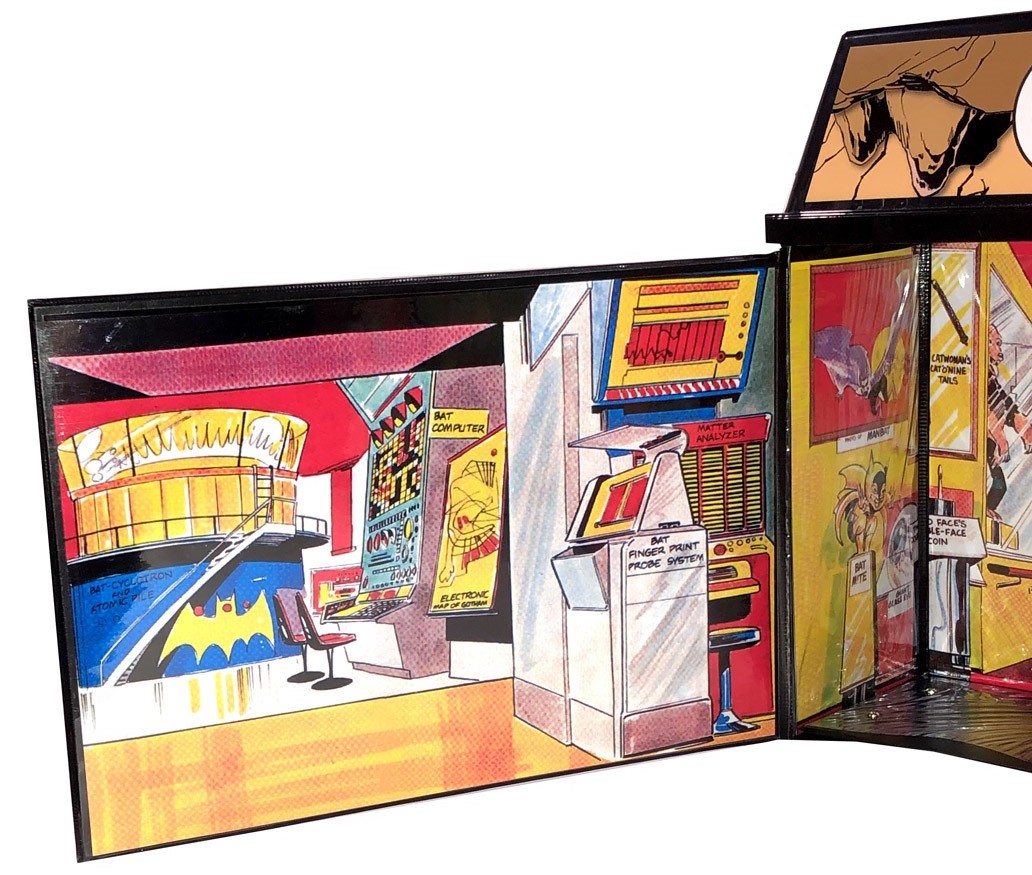 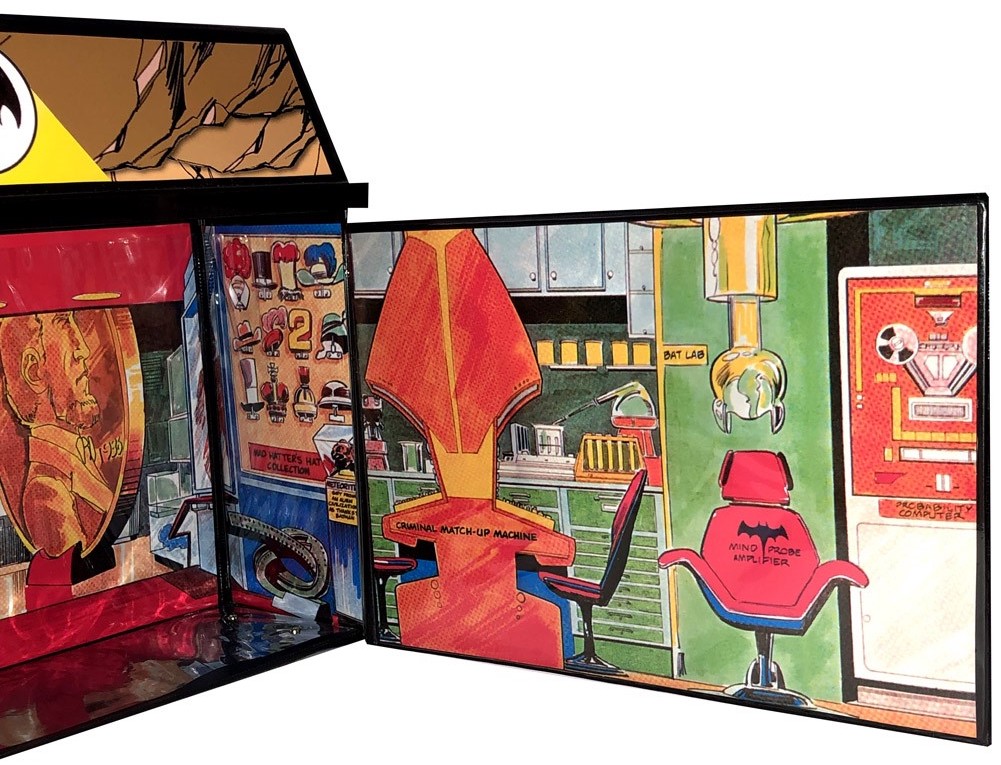 “Mego made two Batman playsets — the Batcave and the Wayne Foundation,” Anthony, who is also a 13th Dimension contributor, recalled. “Whereas the Batcave was a traditional one-level playset, the Wayne Foundation was a four-level skyscraper. It was inspired by the comic book version of the Batcave that Bruce Wayne used when he shuttered Wayne Manor after Dick Grayson left for Hudson University.

“It wasn’t as durable as the Batcave and over the years people lost the plastic pieces or the cardboard backdrops got warped or torn,” he added. “Many years ago I made a few reproduction backdrops but it wasn’t the same without having the other pieces necessary to erect the 40-inch structure. This new playset configuration takes all four levels and condenses them into one level, albeit with some minor edits or omissions to get everything to fit as best as possible in the new layout.”

Here are a couple more looks: 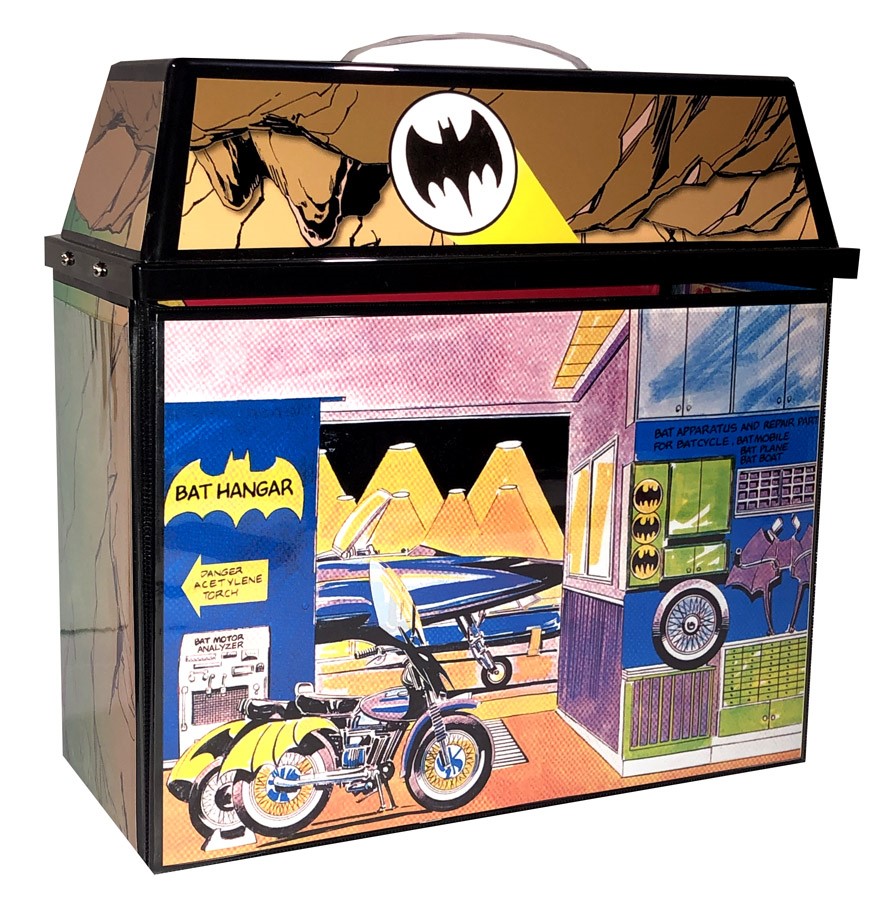 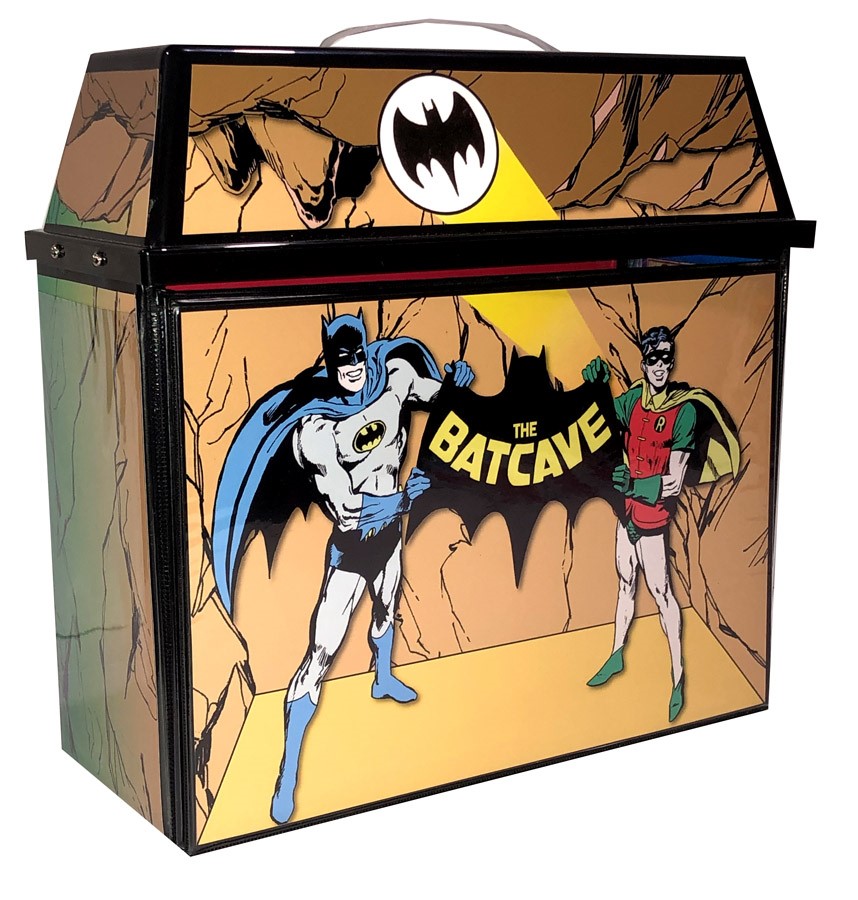 “Since the original artwork was drawn by Neal Adams, I thought it’d be fitting to have the exterior artwork by him as well,” Anthony continued. “But not the Bronze Age version he’s best known for. No, instead, since the Wayne Foundation headquarters was so 1969, I thought it’d be Adams’ artwork from that 1968-69 period when he was doing covers (but not interiors) for Batman. So although Mego’s playset was released in 1977, to me this is the late Silver Age Neal Adams Batcave toy that might have existed back in 1969. (The Batcave schematic was by Frank Springer.)

— Since we’ve been running these INSIDE LOOKS at The Toyroom’s playsets the last couple of weeks, I’ve been thinking about which to buy for myself. This one now tops the list, even if I was fortunate enough to get an original Wayne Foundation. The second on the list? Well, we’ll be taking a look at that soon.

— When I first saw these pix, both Batman #200 — the source of the Batman and Robin figures on the back — and Batman #203 were on my nightstand reading pile. Holy coincidence! 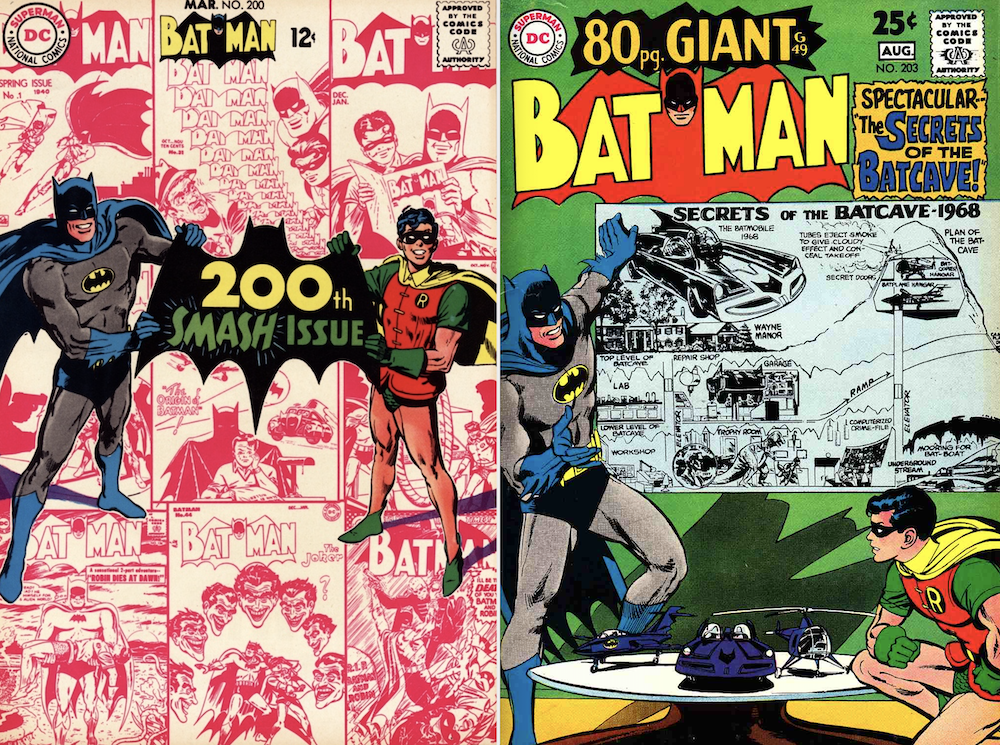 — The Batcave logo? That’s from the Batman letters column of the late Bronze Age.

— Batman #203 is almost all reprints. But the Batcave map, paired with diagrams of Batman and Robin’s utility belts and other equipment, was all-new material. It was all memorably reprinted — in much larger size — in the classic treasury Limited Collectors’ Edition #C-37. (Click here.) 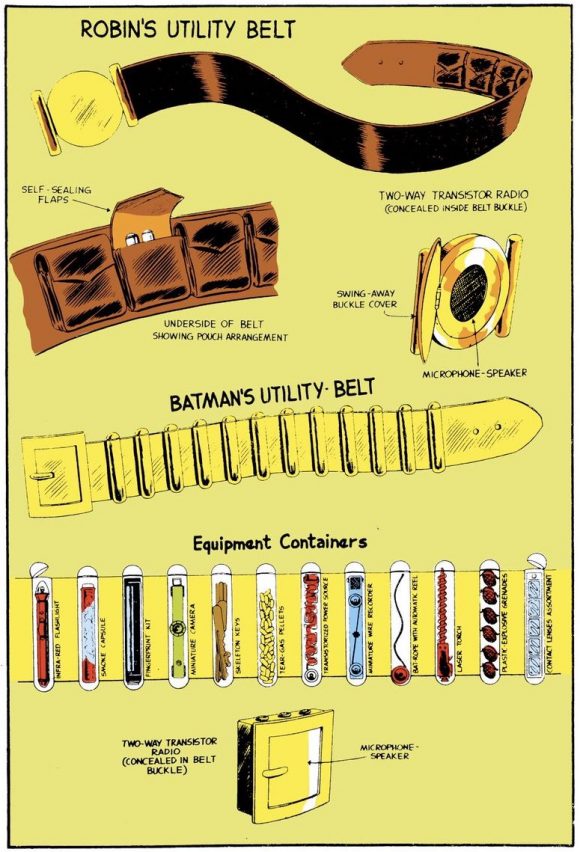 — The Batcave schematic also had a two-page spread in Michael Fleisher’s 1970s Batman encyclopedia. Anthony says he made Xerox copies of that when he took it out (repeatedly) from the library when he was a kid and studied it for ages: “Ten cents a copy, I must’ve spent a few bucks on photocopies from that book.”

— As I always feel compelled to point out, I don’t make a dollar off this. I just love showing it all off. Each set — including case, artwork and complete assembly — is $85 plus shipping. Contact either thetoyroom@yahoo.com or you can message Anthony, who also owns Retropolis Tees, through Facebook, Twitter or Instagram.