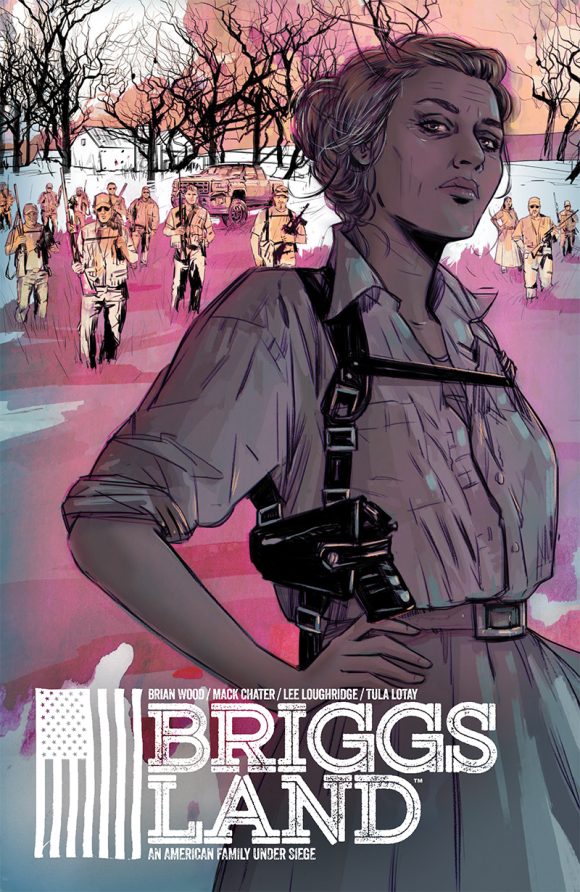 Briggs Land, Brian Wood’s latest sociopolitical drama, couldn’t be more timely. In a nation that seems ever more polarized, Wood is diving headlong into militia culture — sort of the flipside to his recent Rebels.

Briggs Land — due to launch 8/17 from Dark Horse — is, according to the official description, “the story of the nation’s largest and most secretive antigovernment movement. A hundred square miles of rural terrain, founded and managed by the Briggs family, whose political ideologies have been slowly corrupted over the years and now fully embrace gun-running, drug smuggling, money laundering, and a half-dozen other RICO predicates.”

Wood’s also helping to produce an AMC television series based on the book, which will feature art by Mack Chater, Lee Loughridge, Tula Lotay and Nate Piekos.

This is a comic that a LOT of people will be talking about, so we invited Wood to provide us with an EXCLUSIVE dossier on the six characters you need to know when you enter Briggs Land. 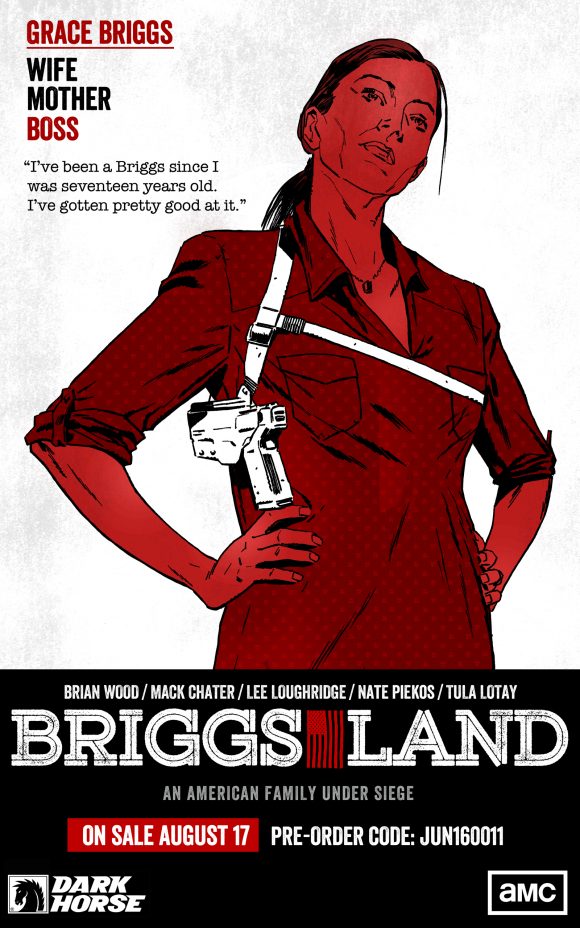 Grace is our lead, the wife to patriarch Jim Briggs, the mother to Caleb, Noah and Isaac. Born in rural Washington state, she married Jim at age 17 and has lived on Briggs Land ever since. But in recent years, since her husband’s been in prison, she’s lived a more secular life than most women in this retro community, and has a perspective that few don’t. So she’s in a privileged position when she makes the break from her husband and takes control of the Land and the family business.

Grace is no stranger to violence and extremism, but has never managed to get desensitized to it. Her poker face is perfect – she can stand witness and even participate in these crimes if she has to – but it affects her deeply and she is always vowing that the next time will be different, that her ability to effect change and improve things is right around the corner. It’s a lie she tells herself always with the best of intentions. She often has trouble sleeping, and denies herself food and other comforts when her guilt flares up.

Through the series she walks this line between hating what she has to do, but still doing it and doing it well. She always seeks the tipping point that will allow her to live a more moral life, but never manages to get there. 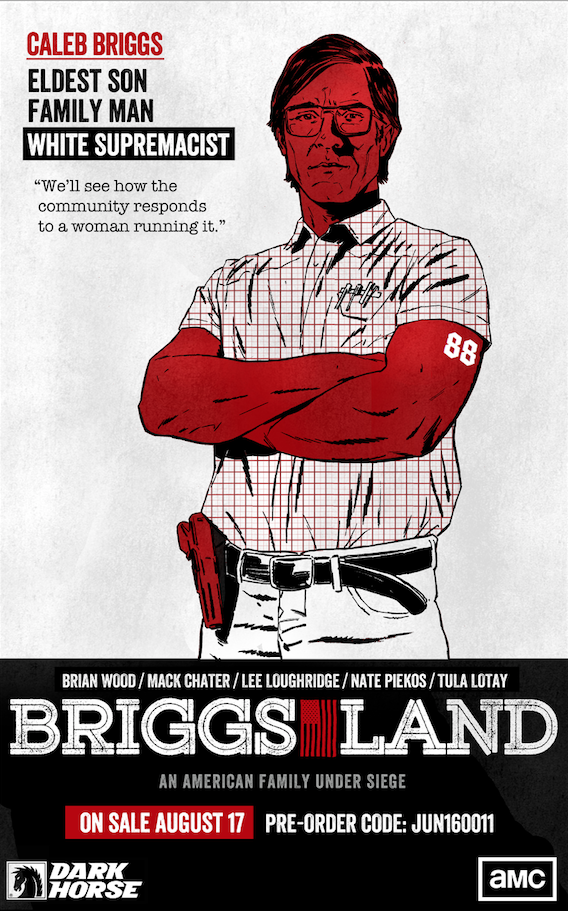 The eldest son, and as such carries around a sense of entitlement. He gets in his own way by being an openly white supremacist and generally not a pleasant or sociable person. He’s well matched in this by his wife Ellie, a seemingly wholesome country woman who holds a fierce rivalry with Grace and resents that she has to defer to her mother-in-law inside the house. These two combined are a sort of racist, bitter power couple, and over time represent a real threat to the integrity of the family and the Briggs empire.

His relationship with Grace is ice cold, very formal. He calls her by her first name. There’s no doubt some deep-seated childhood memories are playing a role in that, along with a general cultural hatred of women. 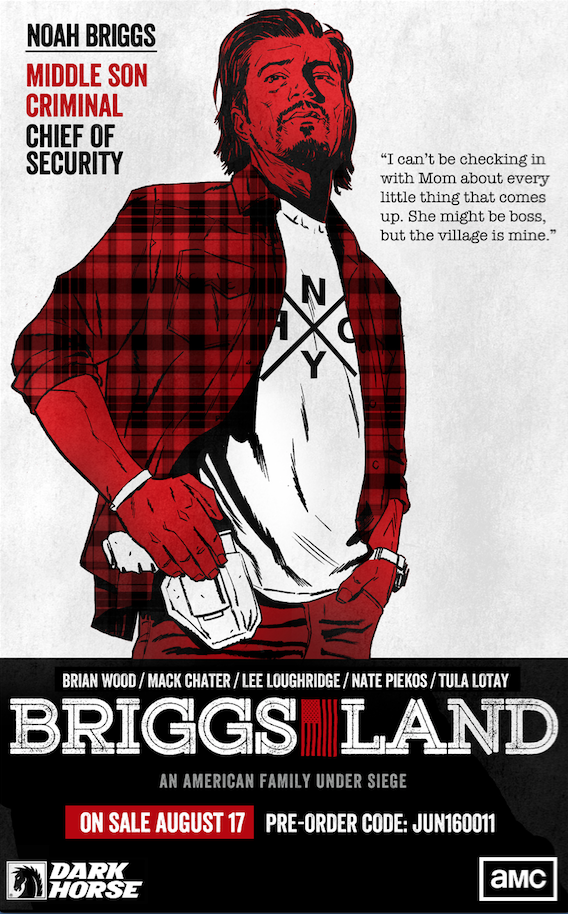 Noah, the middle son, is way more fun than Caleb, the type to have beers with his pals out by the grill and laugh and fuck around. He’s deep in the criminal underworld, doing a variety of things for the family bottom line: drug sales, gun sales, extortion, theft and so on. He and his men present as “classic” militia types, like you see on the news, always armed and armored, with Oakley wraparounds and an outlaw vibe. Despite being neck deep in crime and violence, he’s an incredibly likable guy.

Noah’s wife, Abby, is an outsider in two distinct ways: She’s Latina, and was not born on the Land. Noah scooped her up years ago in a heavy metal bar in Albany, and she’s just like him: outgoing and with a criminal history of her own. They’re fun, beautiful, and reckless. They have an infant daughter.

The fact that Abby isn’t white doesn’t cause trouble on the face of it. Not everyone on the Land is white supremacist, and with the exception of Caleb’s branch, neither is the actual Briggs family. The objection to Abby, mostly from the other wives, is due to her outsider status, the fact she was brought in and doesn’t really buy into the belief system. They see her as a tourist. 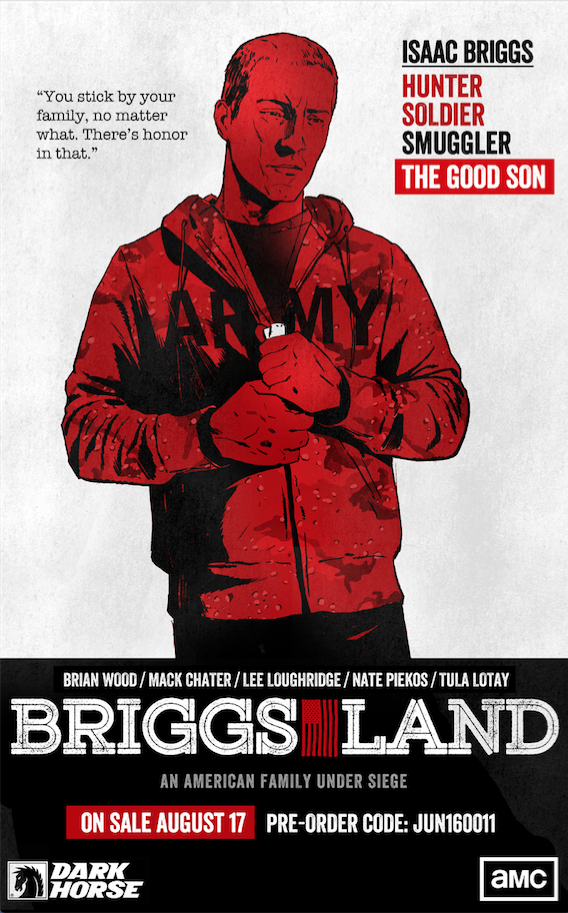 The youngest son, and the only one to have ever left the Land. He joined the military, did a few tours overseas, and is now back. He and Grace have a much closer relationship than she has with his brothers, and it’s probably his most defining feature within the story. He’s her right hand and her moral compass and a check if she goes too far.

Noah’s cool with this, he’s secure. Caleb, despite not liking Grace all that much, is intensely jealous and resentful of the close relationship Isaac has with their mother. In a different life, that could have been him.

Isaac is mentally wounded from the war, some strain of PTSD. In the Army, he was a Ranger, and now he wants to explore the woods of the Land. He also isn’t that interested in the belief system, and in time that will come to the fore and get him in trouble. He’s using Briggs Land as a way to hide out from reality. 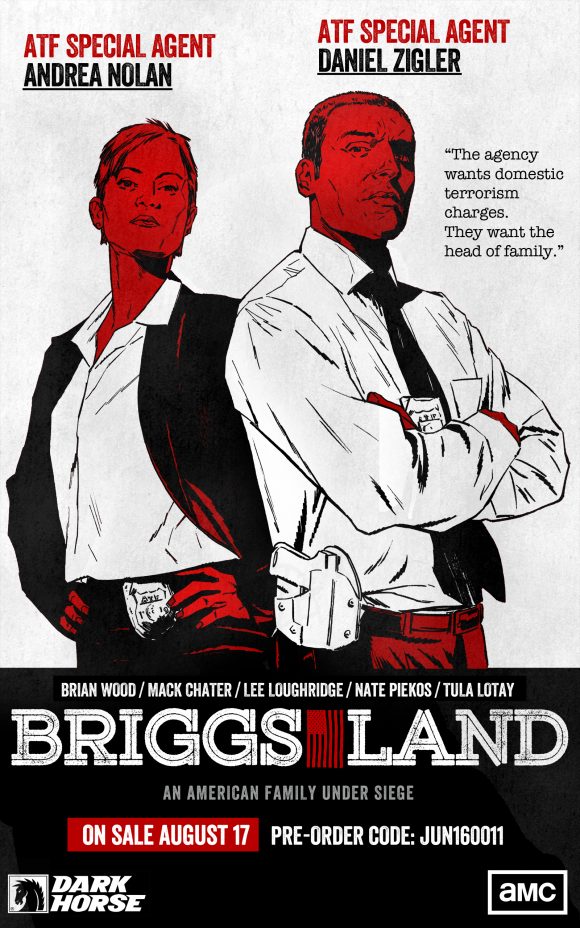 Daniel Zigler is a career agent, honest and dedicated, and what is first presented as a pretty bland task — sit on the Briggs situation while Jim’s deal is being negotiated — he manages to turn into something larger. It was his father who helped lock up Jim Briggs decades ago, and his father always felt there was more to the Briggs than met the eye. In a post-9/11 world, it’s relatively easy for Zigler to talk his bosses into giving him a few weeks to look into the family for any extremist activity. He jumps into it with gusto, liberating dozens of boxes of files from storage and relocating to the area.

As he learns more and more about Grace, and as Grace herself starts to make more and more noise as the new boss, Zigler’s professionalism starts to get sloppy. He blurs the line, he engages with Grace, and in time, even helps her out of tough spots.

Andrea Nolan, Zigler’s partner, only sees black and white in regards to Grace, as Zigler recognizes shades of gray. To her, the Briggs are straight up terrorists, and she starts to get more and more annoyed as Zigler breaks protocol.