“PLease help if you can. The art I donated and thought for all these years was being housed at the Kennedy library at Harvard is now being auctioned off on the anniversary of Kennedy’s assassination. And now I am finding out that the art may have never made it to the library.The archivists tell me there are no records of it ever being received. I asked for the art back and they will not give it to me. I asked for the consigner’s name and they will not tell me that either. They tell me I have no rights to my work and that it is too late to get it back.” 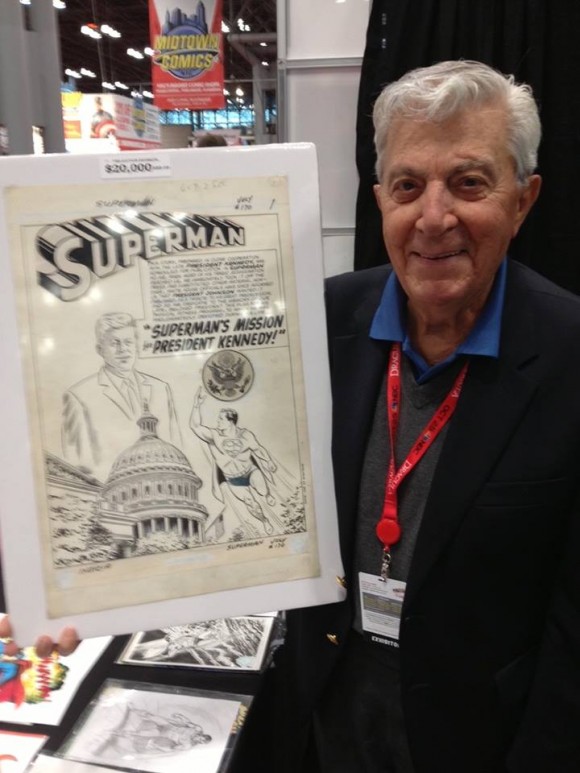 Heritage Auction’s Steve Borrock contacted me with this explanation this evening:
“We have received some questions about this art today, so we figured one of us should come on here and address this.

This art was sold in the 1993 Sotheby’s comic auction, so it has been in collectors’ hands at least since that time. We have no reason to believe our consignor (One we have known for many years and who has an excellent track record with us) does not have the right to sell the piece, and nobody has shown us any evidence that he doesn’t. Whether it was ever in possession of a museum we don’t know, but as many collectors know, museums de-accession pieces all the time.

As to how the photo of Al with the art came about: As many of you already know, all of us in the comics dept., in addition to just working there, are huge comic fans. One of our employees was chatting with Al as a fan at New York Comic Con, and Al expressed interest in seeing the art, so we brought it for him to look at. That’s when someone from the Hero Initiative snapped a few pictures.

We’re all very sorry to hear that Al Plastino never got the art back from DC, but we all know the sad realities of the comic publishing business back in those days. Heck, it’s one of the reasons I am on the board of the Hero Initiative and the reason Heritage helps support them.

Hope this helps clear things up a bit, -Steve”

And another update from Steve Borrock:

“Our consignor purchased the JFK story at auction from Sotheby’s in 1993, and still has the invoice, but in fairness to everyone though, we have withdrawn the art from our November 22 auction while Mr. Plastino’s claim is being investigated.”