A BATMAN THANKSGIVING: A Poster, a Costume and a Brother’s Love

Home » BATMAN'S HOT-LINE » A BATMAN THANKSGIVING: A Poster, a Costume and a Brother’s Love

A different kind of holiday heroism…

UPDATED 11/24/21: For a number of years, we published the SUPER-STAR HOLIDAY SPECIAL, a series of remembrances from a wide spectrum of creators. That’s since been replaced by TOYHEM!, which returns Friday. But some of these stories are worth sharing again, like this one by animator  J.J. Sedelmaier (SNL’s Ambiguously Gay Duo, The X-Presidents), who has a Thanksgiving tale as good as Charlie Brown’s. Right on. — Dan

While at the University Of Wisconsin/Madison in 1978, I made myself a Batman costume for that year’s Halloween festivities. I went all out and used blue skin-diving Neoprene head gear for the mask, a long, flowing blue satin cape done by a local seamstress, gray Danskin tights and body suit, yellow leather belt with tapered wooden dowels and brass buckle for a utility belt, and blue fabric gloves with bat-gauntlets sewn on – I even had a shoemaker sew rubber soles onto blue stretch socks. Unfortunately no pix exist – I assure you, if they DID they would’ve been posted on Facebook long ago. …  It was a terrifically successful endeavor and Halloween was a trip that year!

It occurred to me that my brother Adam had his 8th birthday coming up at the end of November, around Thanksgiving, and so I decided I’d make an appearance at his party in nearby Chicago.

I made the three-hour drive in my 1968 black Rambler station wagon and parked across the street from where Adam’s party was. I needed a place to change into my costume and couldn’t do it at the party. There was construction going on across the street so I asked the foreman if I could possibly use the on-site porta-potty. He said, “No prob.”

I took my shopping bag of “attire”, went into the “fragrant booth,” and about two minutes later emerged as Batman and ran across the street into the party. Needless to say, I’d love to have had pix of the expressions of the construction crew. … I had brought a Batman poster with me to sign for Adam, as well. 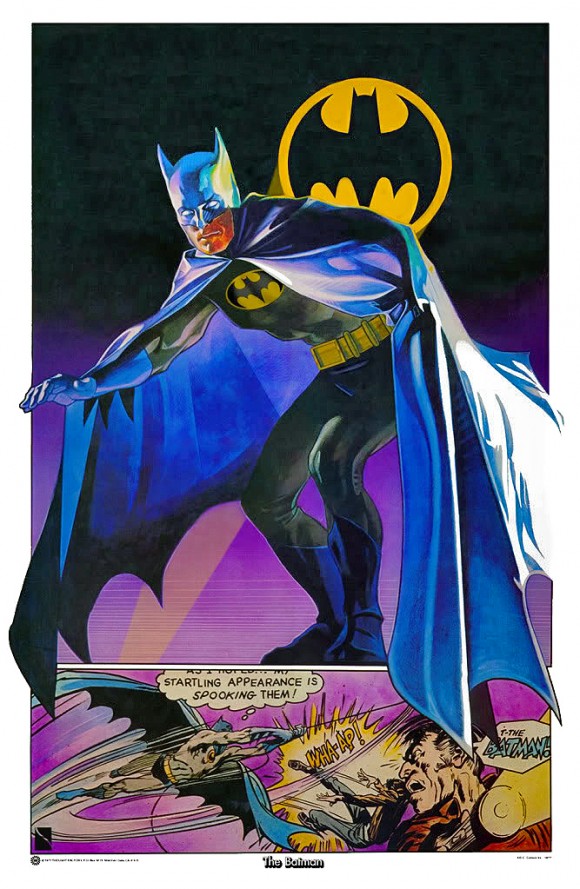 A copy of the Drew Struzan Batman poster I signed for Adam.

I burst into the party, and using as low register as I could conjure up, commanded, “Is there an Adam Sedelmaier here?!” He gasped, and said “Me!” I strode over to him, unrolled the poster, signed it “To Adam, Happy Birthday! The Batman,” shook his hand and said, “Happy birthday, pal!” and then bolted out of the celebration. I jumped into my “Batmobile” and screeched away. … The construction crews’ positions and expressions appeared to be the same as they were when I emerged from the porta-potty …

About 20 minutes later I showed up at the party as “Brother J.J.” Adam ran up to me and said, “Batman came! Batman was here!” I said I was upset that I missed him. My 10-year-old sister, Rachel, was looking at me with the most curious expression  … not unlike one of those suspicious “Lois scrutinizing Clark” looks …