In which the guy behind Saturday Night Live’s Ambiguously Gay Duo pays tribute to an animator who inspired him:

UPDATED 10/19/16: Today would have been Lou Scheimer’s 88th birthday, so we’re re-presenting this piece by J.J. Sedelmaier:

Dan here: A quick intro before I turn the pulpit over to J.J. Sedelmaier. When animation pioneer Lou Scheimer died last week, I felt a pang of sadness. He was one of the founders of Filmation, the company that produced Masters of the Universe and a funky Star Trek cartoon in the ’70s, among a gazillion other projects. Naturally, Filmation is best known to me as the producer of the schlocky 1960s DC cartoons starring Batman (which in my mind is an unofficial fourth season of the Adam West show), Superman, Aquaman, Superboy, plus key members of the Justice League (featuring an oddly excitable Flash) and the Teen Titans (featuring a way off-model Kid Flash). But I do plenty of reminiscing around here, so it hit me that the best guy to tip the cap to Scheimer is J.J. Sedelmaier, whose uproarious Ambiguously Gay Duo was a direct riff on those kitschy ‘6os DC romps.

Thanks, J.J. The floor is yours:

A few years ago I was doing a signing of “Saturday Night Live”/TV Funhouse art at San Diego Comic-Con. A man came up to me and introduced himself and proceeded to say how much he loved our cartoons. It was Lou Scheimer! 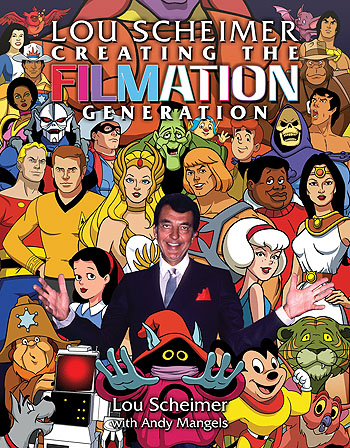 A Scheimer retrospective book from TwoMorrows

I’ve always cherished the unsolicited overture he made and we had a wonderful conversation about how his various cartoon series have become an integral part of pop culture.

Lou Scheimer passed away on Oct. 17 and it’s more than fitting that he receive his due as someone who influenced several generations of Baby Boomers and animation fans with the cartoons that his studio, Filmation, produced. A great deal of my studio’s reputation is firmly set in the world of satire and parody, and a majority of this work has been inspired by the cartoons that were done by Filmation, Hanna‐Barbera and similar TV production shops.

On top of all this, Lou took great pride in making cartoons with a message and from what I hear, Filmation was a wonderful family environment to work in – and when most all series animation was shipped overseas, he kept the work in the U.S. 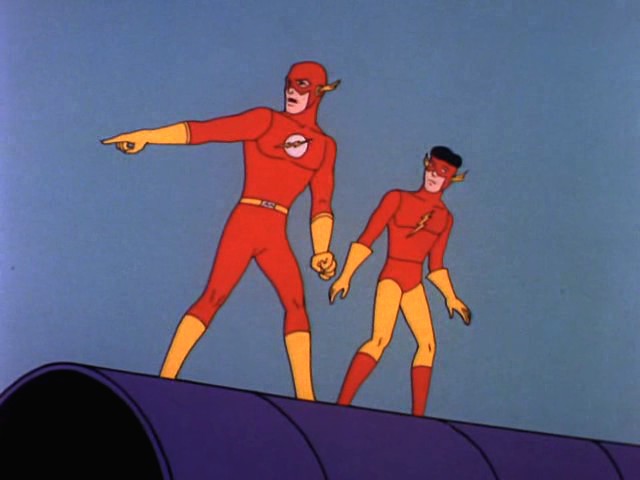 Forget Kid Flash. Even the Flash is off model!

The 1960s and 1970s were hardly a Golden Age of Animation, and the Saturday Morning realm of limited animation production was hardly groundbreaking in its technique, but we can’t deny it’s effect on millions of kids who would later carry a fondness and affection for characters and shows they grew up with.

Personal nostalgia is like a narcotic, complete with distorted reality and even hallucinations – what else would cause anyone to swoon to the likes of “Scooby‐Doo”? But it’s this infiltration into the viewer’s DNA that has allowed us to do the parodies so successfully.

So here’s a healthy thanks and much respect to Lou Scheimer!

A sampling of Sedelmaier’s Filmation-inflected work can be found here, here and here.

And the best of them all, the Ambiguously Gay Duo!