By LISA KENNEDY and G.D. KENNEDY

New York Comic Con is a fantastic annual experience, but it is also a long and arduous weekend of hard cement floors and massive crowds.  It is also an evolving creature, growing every year — reportedly over 150,000 tickets were sold for the event — and introducing new and varied elements as the comics continue to spread their tentacles throughout pop culture, while other geeky pastimes are subsumed with the con’s grasp.  So, after Lisa Kennedy and G.D. Kennedy spent four long and exciting days pounding the pavement at NYCC, they offer a few thoughts on the weekend.

1. Lots of women-centric panels (“strong female characters”). Every year, NYCC invites more gal guests to the mixer. This year was no exception and each of the four days featured panels on diversity in comics, focus on women creators and writers, and combating stereotypes in genre fiction. All positive and much-needed, although we hope future cons will expand on their definition of diversity to include more people from different backgrounds whose work and talent are what make the genre continue to evolve.

2. The Big 2 are all about business.  Cons like NYCC are industry functions for the Big 2, and nowhere is this as apparent than at their panels, which are regularly stoic and serious, and panelists are stuck to benign questioning and canned pitches.  There should be no confusion that these are sales pitches, and while they can have fun moments, there is no pretense that that they are anything but.  It’s hard not to note this when one Vertigo panelist, after going on a bit of a tangent, quickly clarified that he might be “speak[ing] out of school” after a D.C. staffer approached him and whispered something while he was answering.  Which is to say . . .

3. Indy creators have more fun.  There was marked difference between between the junket-style of the Big 2 and the tenor of panels by the smaller, creator owned presses like Image , which were more engaging, lighthearted, and raucous.  Saturday’s I is for Image panel veered off into the absurd.  Matt Fraction of Sex Criminals reveled in anecdotes about diaphragms and crying at Shrek, while Roc Upchurch of Rat Queens, in response to a question about his armor designs and lock of “boob plates,” retorted, “Boob plate doesn’t serve any purpose except jerking off.  My designs are based off of actual armor,” and Brian K. Vaughan, when not lauding Fiona Staples’ stellar work on Saga, exulted in “tortur[ing]” readers with cliffhangers.  (G.D. Note: I admit my biases here.) 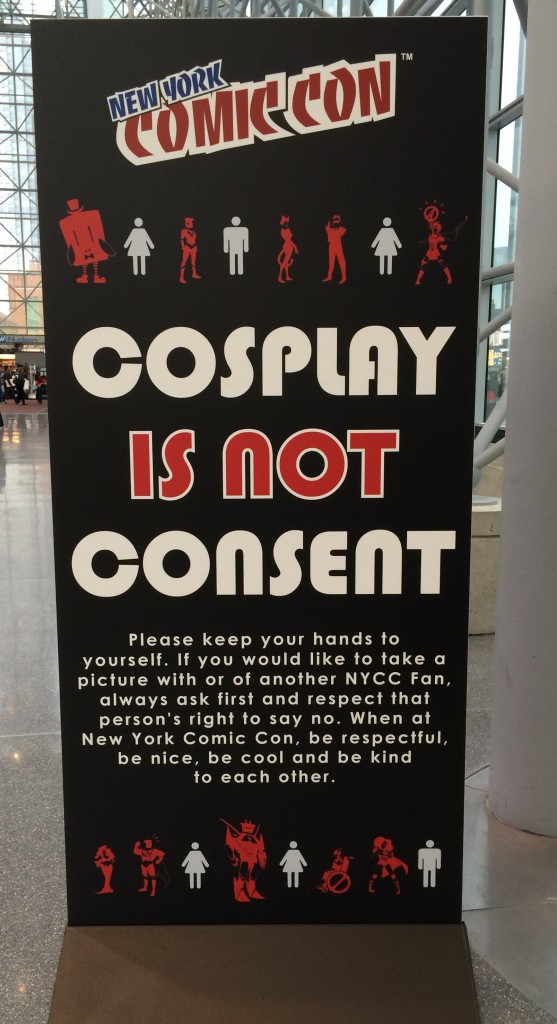 4. Cosplay is not consent.  A very promising and inclusive campaign to promote decency amongst conventioneers. “Cosplay Is Not Consent” posters abounded, thoughtfully designed by artist extraordinaire Amy Reeder, featuring cut-out designs and a cool minimalist layout. The approach highlighted some of the worst harassment  at Comic Con, but in a way that was not accusatory and felt mature. The visuals were assisted with an easy to navigate incident reporting tab through the NYCC app, as well as vigilant NYCC guard presence.

5. NYCC Exclusives.  There were a few nice exclusives this year, though overall, the crop was a bit less exciting than last year.  IDW had a nice exclusive artist’s edition of its collection of Marvel covers, with an exclusive variant featuring the iconic cover to Daredevil #181, while Avatar was selling sets of Alan Moore’s Neonomicon, signed by the infamous recluse and remarked by artists Jacen Burrows.  Archie Comics gave us a few exclusives, my favorite of which was the Sabrina #1 variant by Francesco Francavilla.  Marvel and DC each ostensibly had a few “exclusives,” though the latter is notorious for later releasing its “exclusives” on its website, and I would wager that Marvel will not pass on the mass-sale possibilities of its plush Rocket Raccoon “exclusive” (which was far less ubiquitous than last years pre-movie release).  The big winner, at least from a supply/demand perspective, was Scott Snyder’s Wytches #1 variant, with Image selling out each day’s allotment in a matter of minutes (until it was revealed on Sunday that Image was shorted a box, and only 20 were sold the whole day); these are now selling at $100+ a pop on eBay. 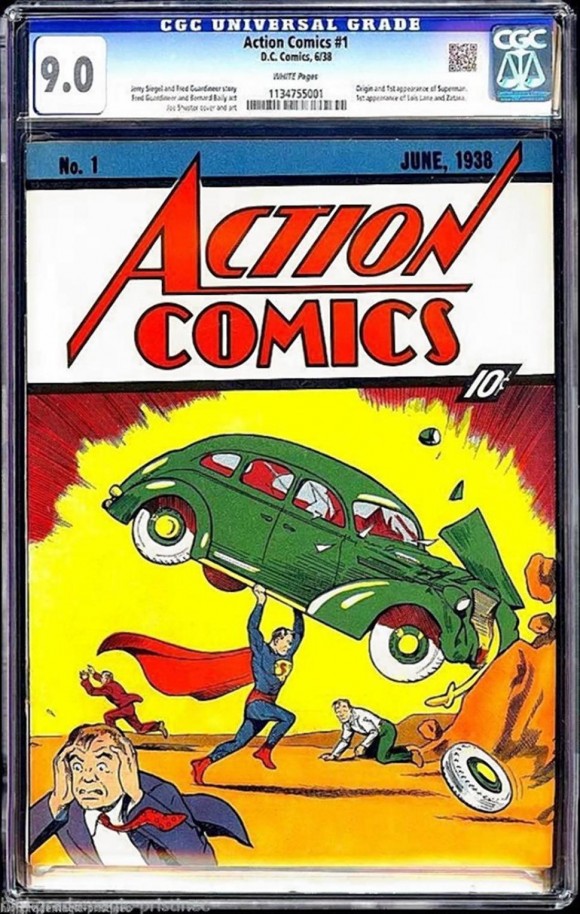 6. A casual display of wealth.  Earlier this year, Metropolis Collectibles purchased the most expensive comic ever, Action Comics #1, graded 9.0 by CGC, for a whopping $3.2 million.  If you were lucky enough to be at Javits on Thursday, you had the opportunity to see this book.  Obviously, for any collector, this is a magnificent sight, and seeing it in person does invite fantasies of the funny books one could horde with extreme wealth. However, if you were expected to wade through security and eye scanners just to glimpse the antiquity, you would be disappointed — this most expensive comic book ever was laying on a shelf in a locked glass case among Metropolis’ other (almost equally) impressive books, without so much as an indication that this was The Book.  Very cool to be able to smear your nose right against the glass in the middle of the con floor and be inches from a piece of history.

7. The exhibits.  The Just Dance stage faced competition this year for most mesmerizing exhibit in the form of an incredible 3-D scanner courtesy of Massachusetts-based Forge Studios, as well as Weta Workshop’s blinking Smaug head. Referring to the latter, the life-size bust of the griller of dwarves rested unsettlingly upon Weta’s booth, slowing blinking and peering at stunned onlookers. Even after two days of passing by it, the feeling that Smaug might decide to do more than just blink made you keep an eye on the dragon. On the other side of the show floor, Forge’s scanner immortalized conventioneers by turning them into figurines using the company’s signature 3-D printers. Now every cosplayer will be able to battle plastic storm troopers or have the coolest zombie wedding cake toppers ever. 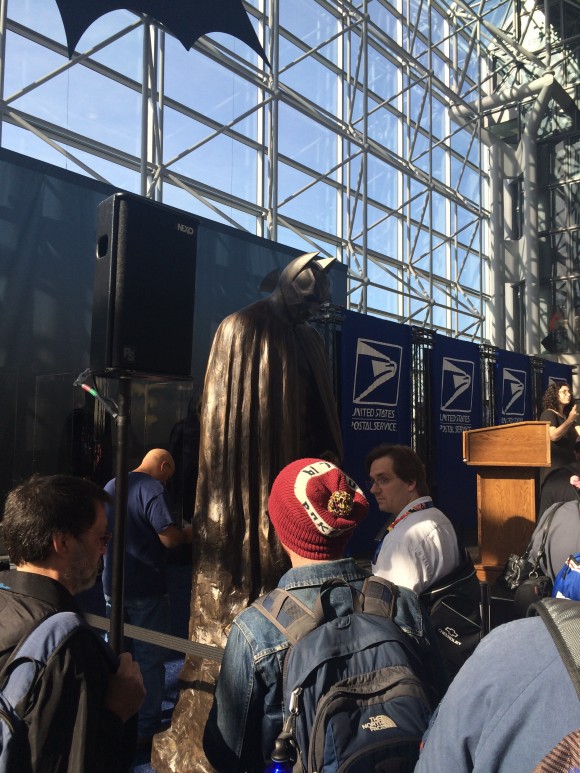 DC’s display, outside the main hall

8. Oh, the horror!  The Cult of Kirkman is strong, and The Walking Dead was prominent throughout the weekend, both in comic and video form.  But maybe the best discussion of horror all weekend was a panel on Friday that featured some less-than-household names, including Frank Barberie (Five Ghosts), Matt Rosenberg (12 Reasons to Die), Justin Jordan (Luther Strode, Spread), and Jeremy Gardner (writer, director, actor of The Battery).  The panel was lively and often hilarious, touching on the nature and meaning of horror across medias, the evolution of the genre, taboos, and the social value of the genre (and the revelation that Rosenberg’s mother is the writer of the 1980s slasher flick Maniac).

9. NYCC is not about gamers.  There is, or at least can be, a natural intersection between comics and video games, but NYCC has not yet put its stake into the gaming community.  Perhaps deliberate — it was only a few years ago that NYCC was overrun by a joint anime convention — but there is a serious lack of video game-centric programming at the show (although there were a few cool booths and displays).  And what gaming exhibits there were seemed underwhelming: Saturday offered a panel on the future of gaming, which seemed little more than a eulogy to narrative-based games, and a PR-driven concession to the rise of free-play and mobile gaming. The panel acknowledged the shift to be devoid of serious story and hellbent on nickel-and-diming consumers for power-ups and add-ons, but didn’t provide any kind of solution or counter weight to such a tragic turn in gaming, except for a feeble mention of increased diversity in the culture.

10. NYCC’s App.  Speaking of the app, much better overall this year, although nearly impossible to find in Apple’s app store (don’t know about the Android marketplace). Entering “new york comic con” should have brought it up, but the design team apparently slacked a bit on the SEO. The app was strongest when pursuing the many panels, exhibitors, and speakers, and adding them to individual schedules. It was weakest on its reliance of Facebook and other social media to share and connect this info with other people. I get that most people are in some way connected using Facebook or Twitter and it makes sense to use it with New York City’s second largest event of the year. However, for those of us who don’t like being data mined, it would have been nice to be able to share our panel and signing schedule with friends through the app by itself. 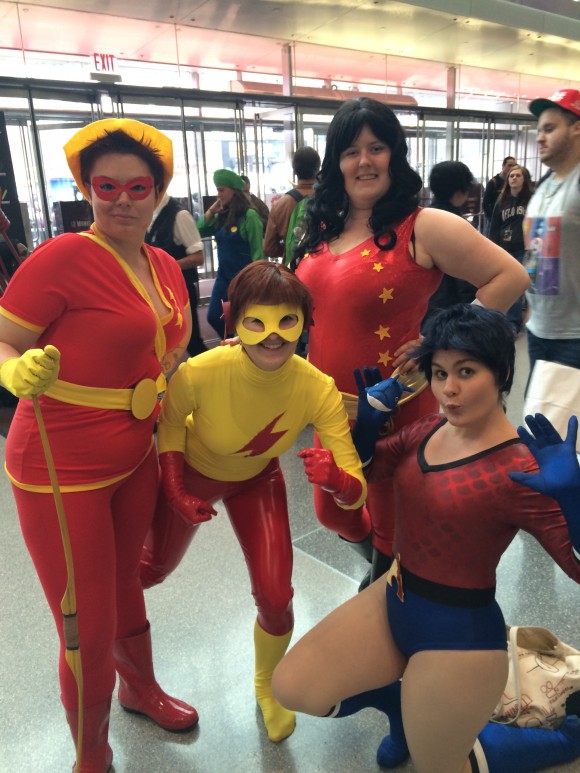 11. Lines, lines, LINES!  Lines are the unavoidable evil of cons.  Like the weather, they are inevitable and beyond mortal control.  For the first time, NYCC cleared the main stage after each panel in an effort to make it harder for nerds to camp out for hours to see a single event.  Not sure how it worked for the main stage, but lines to other panels seemed longer than usual.  Even the most obscure panels often had 30-45 minute waits, with staff capping the queues well in advance and standby overflow pouring into hallways, creating inescapable zombie bottlenecks.

12. Return of the Red Bull. By now, most fans are probably aware that Fergie is bringing The Last Unicorn to Broadway. For years, adult women have been teased with promises of a return, re-release, reimagining, RE-just-give-us-something-anything, of the beloved 80’s cult-classic film. Based on the book by Peter S. Beagle who also wrote the screenplay, the story is steeped in illusion yet rendered simple and elegant by its early anime design. A panel on Saturday with the writer and an exclusive on Sunday featuring none other than Transformers star, Josh Duhamel, officially confirmed that an immersive musical performance of The Last Unicorn would soon begin production. What many fans might not know is that the film rights for a live-action adaptation will be up for grabs in early 2015, and that several major studios are sniffing around. The Saturday panel dropped this tidbit along with plenty of nostalgia, much of it bittersweet, regarding the writing and making of The Last Unicorn courtesy of Mr. Beagle whose artful anecdotes and bygone talent for storytelling made the allure of the film that much more by getting to know its creator.

13. Brian K. Vaughan is The Man (and the woman working the Image counter on Thursday is The Woman) — A G.D.-only Tangent:  As a big fan of Mr. Vaughan’s work, I  looked forward to what would be Vaughan’s (strictly ticketed) signings throughout the weekend.  But when I arrived at Image’s booth on Thursday, just a few minutes after opening, every ticket was gone.  But lo, a miracle occurred—maybe it was my (presumably pathetic) look of heartbreak, but suddenly the woman behind the counter reached into her pocket saying, “Brian gave me an extra ticket today and told me to do something nice for someone, so here you go,” and handed me the last ticket for the signing.  So thank you Brian, and thank you awesome Image employee.