WRATH OF KHAN Has Been — and Always Shall Be — the Best

UPDATED 11/25/17: Today was Ricardo Montalban’s birthday! He would have been 97. (He died in 2009). Perfect time to re-present Rob Kelly’s column on Wrath of Khan — for my money the greatest Trek story ever told, and Montalban’s finest moment. Enjoy. — Dan

As part of the celebration, I’ve invited our REEL RETRO CINEMA columnist Rob Kelly to analyze the pinnacle of Trek moviedom: The trilogy of films comprising Star Trek II, III and IV. Each film will get its own column, starting with The Wrath of Khan, below. (For Star Trek III, click here. For Star Trek IV, click here.)

Rob’s columns usually include a foray into the comic-book adaptation or tie-in to the film in question but we’re dispensing with that here. For these special REEL RETRO CINEMA installments, it’ll be the screen, the whole screen and nothing but the screen.

By the way, I’ll be joining Rob for a discussion of The Wrath Khan at his Film and Water Podcast later this week, so click here for the latest.

Star Trek II: The Wrath of Khan was released June 4, 1982, and three decades on it remains not only one of the high points of the Trek movie universe, but also one of the finest sci-fi adventures ever put on the silver screen, period. So pour yourself a snifter of Romulan Ale and let’s take a look back at what makes it so great.

After the tortured production that was Star Trek: The Motion Picture, Paramount was wary of putting another Trek film into production. While ST: TMP was a box-office success, it came with an enormous price tag and the general consensus was that the film was a dud (an opinion shared by yours truly). Long, ponderous, and dramatically inert, ST: TMP seems to be a film made by people who had little to no understanding of what made the original series work, and why people would still clamor for more Trek a full decade after the show went off the air.

Thankfully the suits at Paramount decided that they should try again, but this time the purse strings would be knitted tight. To that end, they hired TV producer Harve Bennett to produce the film, which was quite an unusual move at the time. Nowadays creative people move in between movies and TV with ease, but in 1982 those worlds were quite separate. Handing the keys to a big(ish)-budget movie franchise to a guy who cut his teeth producing stuff like Gemini Man and The Bionic Woman seemed odd, but of course if you’re looking to keep costs down, hiring a TV producer makes perfect sense. Legend has it that Bennett, not particularly a Trek fan, took it upon himself to screen every episode of the original series and see what it was all about. 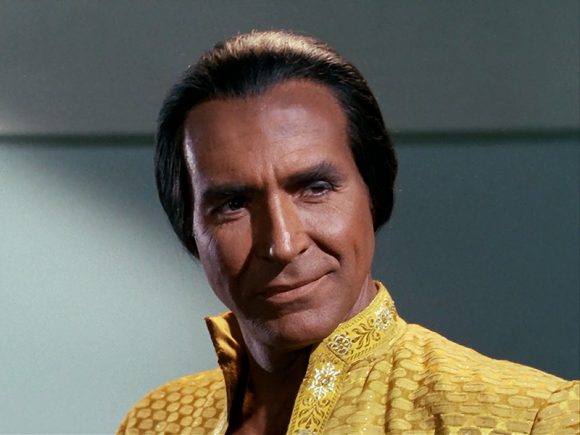 The Season 1 episode “Space Seed” stood out to him as one of the series’ best, and he realized that in Khan (played so memorably by Ricardo Montalban) there was a compelling, menacing protagonist, something the first film lacked. He quickly decided to bring the genetically modified, would-be world conqueror back for the new movie.

He followed that with an even greater idea, hiring author/writer/director Nicholas Meyer (Time After Time) to helm the film. Working with another TV veteran, writer Jack B. Sowards, the three men crafted a screenplay that eschewed all the mistakes on display in the first film and delivered a tight, powerful tale of vengeance.

In an age of reboots, requels and other repurposing of previous material, it’s still impressive how smoothly Star Trek II: The Wrath of Khan deals with the first film: It doesn’t. Opening with the words “In the 23rd Century…” the movie simply pretends that there is no previous Trek movie to worry about: The costumes are different (the gray jammies giving way to a more visually interesting and nautical red-and-black combo, which would last through the next six films), the characters no longer spend endless scenes squabbling and, by continuing a storyline from the series, it encircles the show and the movies as one big universe.

The other major change Wrath of Khan makes is that it deals head on with the idea that these characters have aged in the decade-plus since they were on TV. Captain Kirk has been kicked upstairs and is now Admiral Kirk (“Admiral?!?!”—Khan Noonian Singh), but he’s unhappy in his new administrative position. We also learn that Kirk has fathered a child (!), who is now a full-grown adult following in his mother’s footsteps as a scientist. 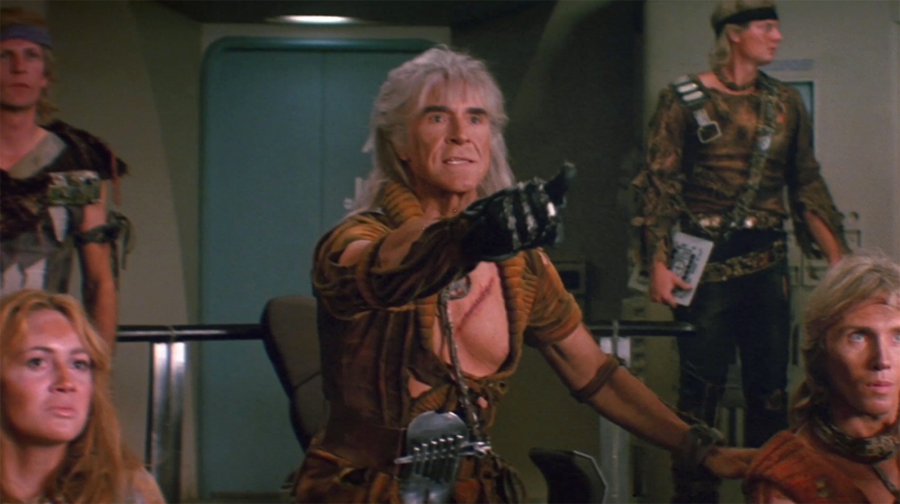 All the main Enterprise crew display the chemistry with one another that made the original show so compelling (even when they were busy doing stuff like retrieving Spock’s brain). And while Khan is, of course, a completely power-mad loon, his quest for vengeance is just this side of understandable: He and his people were deposited on a planet by Kirk 20 years go, but then were forgotten. The man has had all this time to nurse a grudge, so when he has the opportunity for revenge, you get why he ignores his second-in-command’s admonition to give it up and just take off for parts unknown.

It really is remarkable how many iconic moments Meyer, Bennett and crew manage to cram into the film’s 2-hour running time: the concept of the Kobayashi Maru test, the Genesis Project (which helps inspire some good old-fashioned philosophical musing between Kirk, Spock and McCoy), the brash new Vulcan officer Mr. Saavik (Kirstie Alley), Kirk’s brilliant one-upsmanship of Khan via the prefix code, Kirk and Spock’s talking in code (“By the book”), the nasty little ear worms, to say nothing of the film’s coup de grace: the death of Mr. Spock.

While there was some vociferous fan outcry at the time, it is inconceivable that a movie that messes with a franchise’s status quo so thoroughly could be made today. On paper, killing off Trek’s most iconic character must have seemed like creative suicide, but what angry fan could have possibly imagined it would be done so well? Spock sacrificing himself to save the Enterprise, living just long enough to have a brief, heartfelt goodbye with his best friend is so powerful that it remains one of Trek’s finest moments (Star Trek Into Darkness tried to replicate it, with…mixed results). And then for the film to use that moment to deliver Kirk to a better place (“I feel young”) gives The Wrath of Khan a sense of uplift that lets you leave the theater feeling like you were part of a wonderful adventure.

Performance-wise, all our regulars seem more comfortable and confident in their roles: William Shatner is terrific as Kirk (I love his ever-so-slightly-sarcastic “It’s coming through now, Khan” as his foe pesters him for the Genesis data), DeForest Kelley’s Dr. McCoy is at his crusty, cantankerous best (check out his slight smile when he learns of Kirk’s playing-possum routine inside the Genesis cave), and of course Leonard Nimoy breaks your heart in what many thought was his final scene as Spock.

As for the new characters, Bibi Besch as Carol Marcus is tough, smart, and feisty, completely believable as someone who would have been involved with legendary ladies’ man James T. Kirk but completely his equal. At first, nerdy Merritt Butrick as David Marcus doesn’t seem like he could possibly be Kirk’s son, but then it becomes more plausible when we see what a hothead he is, despite his mother’s best efforts. And Ricardo Montalban delivers what Harve Bennett was hoping for: He gives Wrath of Khan a gutsy, hissable villain in Khan, whose hatred of Kirk is so powerful the average fan never realizes that this is a movie where the two main characters are never actually in the same room at the same time!

Star Trek II: The Wrath of Khan reset the world of Star Trek and showed everyone just what could be done with this world and these characters. There have been 10,000 sci-fi films since, but very few have been able to capture that potent mix of sci-fi wonder, excitement and powerful emotion that keep old Trek fans going back to it and new Trek fans discovering it. 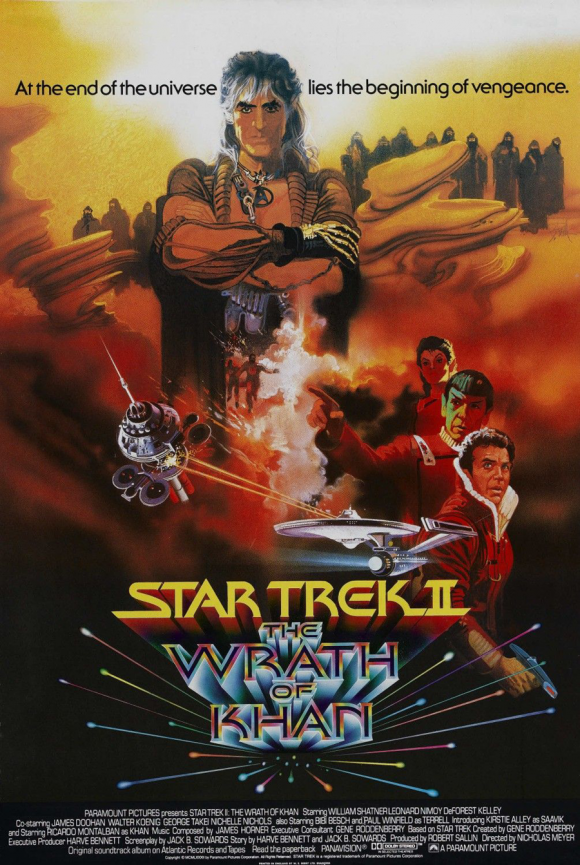 I can’t think of a better example of how well Wrath of Khan holds up than this: just a few weeks ago I was visiting the National Air and Space Museum in Washington, DC. Amid all the history on display (the Spirit of St. Louis, the Apollo space capsule), is an IMAX theater showing movies with a connection to space travel and exploration. One of the films available to watch? Star Trek II: The Wrath of Khan. Not bad for a movie that was started with the limited, if not downright cynical, expectations of a movie studio trying to wring one last low-budget winner out of a franchise that everyone thought was dead in the water (or Mutara Nebula, as the case may be).

One other brilliant thing that Wrath of Khan does is present us with its own version of Chekhov’s gun (no relation): It introduces the Genesis mega-weapon in the first act, and then pays it off in the last. The film ends with the creation of the Genesis Planet, which of course would be the central focus of Star Trek III: The Search for Spock, which we look at here…

Rob Kelly is a writer/artist/comics and film historian. He is the co-host of The Fire and Water Podcast (and the host of its sister show, The Film and Water Podcast), the co-creator and writer of the award-winning webcomic Ace Kilroy, and the creator of the book Hey Kids, Comics!: True-Life Tales From the Spinner Rack. His favorite episode of the Original Series is Arena.