STAR TREK IV — A Whale of a Good Time

To check out Rob’s piece on The Wrath of Khan, click here. For The Search for Spock, click here.

Star Trek III: The Search For Spock ended with even more dangling plot threads than Star Trek II: The Wrath of Khan did: Spock has been resurrected, the Enterprise has been destroyed, and its former crew is now a bunch of criminals, at least in the eyes of the Federation. What next?

The answer to that question, at least to this author, is the finest, most fun Star Trek adventure ever conceived. Having shown Paramount he knew how to successfully manage a major, million-dollar-movie franchise, director Leonard Nimoy was given a wider berth to create whatever story he wanted for the fourth film in the series.

Re-teaming again with producer Harve Bennett and writer Nicholas Meyer, Nimoy decided that after two films of death and destruction, it was time to lighten things up a bit, both literally and figuratively. Star Trek IV: The Voyage Home would send our heroes back in time to 1986 to rescue a pair of humpback whales needed to communicate with a destructive alien probe that has appeared in their time, looking to speak to a species that has been hunted to extinction. 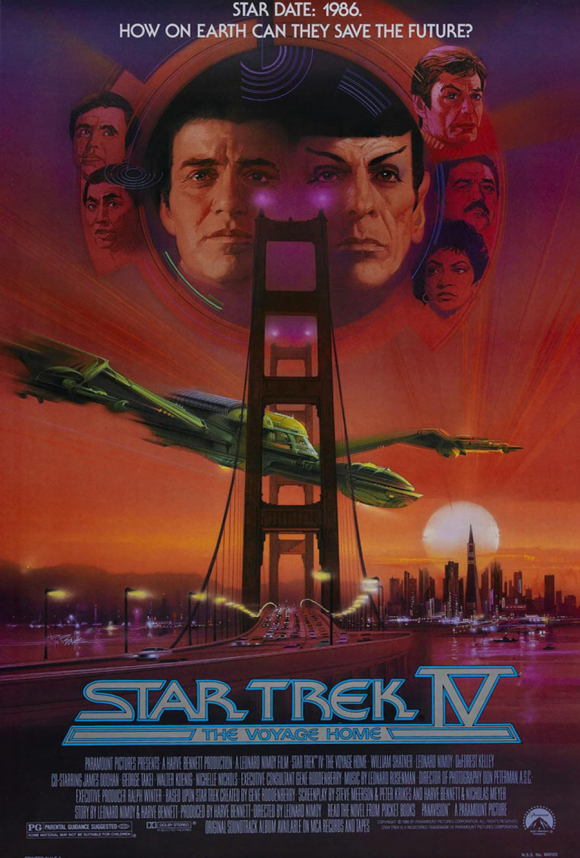 After the Black Hat-ted villainy of Khan and Kruge, this new film’s villain would be the human race’s own shortsightedness. In the process, the crew of the stolen Bird of Prey (which lands in Golden Gate Park) would meet a kind-hearted oceanographer named Gillian Taylor, whose beloved whales are the key to our heroes’ mission.

Despite how effortless this movie feels, initially it wasn’t easy putting it all together. Numerous concepts for what Kirk and co. are searching for were proposed then rejected: a bug, a plant, even a snail darter, until the wise decision was made it would make for better drama if the logistical challenges of grabbing two massive whales were added to the story.

Eddie Murphy, a huge Trekkie, initially wanted to be in the film, but then changed his mind and decided to make The Golden Child instead. For anyone who has seen Superman III, you know how dicey a proposition adding a big-name comedian to a sci-fi-based franchise can be, so I think we can all be glad Murphy didn’t like what he read and moved on.

For the first time, the regular crew of Star Trek actors (Shatner, Kelley, Doohan, Nichols, Takei, Keonig and Nimoy, pulling double-duty as director and actor) got to film scenes outside, on the streets of sunny San Francisco, and you can almost see the delight on their faces. Realizing that humor was an important part of the original series, this series’ installment gets a lot of mileage out of our heroes’ baffled reactions to life in the 20th century: when called a “dumb-ass” for wandering into traffic, the normally unflappable James T. Kirk has no response except “Double dumb-ass on you!” The group is broken up into teams, each tasked with solving a specific part of the mission—Kirk and Spock (hiding his pointed ears beneath a headband, which garners no notice amid the citizenry) look for some whales; McCoy, Scotty and Sulu have to find a way to build a whale tank, and Uhura and Chekov have to nab some nuclear power so the rust bucket they came in can make its way home.

As if all this wasn’t hard enough, Kirk has to contend with a Mr. Spock who, as McCoy states it, “isn’t operating on all thrusters.” Having just been returned to life, Spock is still sorting things out in his head, leading to some of the film’s biggest laughs. Unwilling to lie, he answers every question posed to him by Dr. Taylor with po-faced honesty. He can’t even pretend to like Italian food when offered it by Gillian, who takes a shine to these two weirdos who seem really interested in her whales, leaving Kirk to cover for his old pal with one increasingly strained excuse after the next.

Shatner and Nimoy’s comedic timing is tops, and Catherine Hicks, as Gillian, has a real live-wire energy that fits into the proceedings perfectly. I’m sure, on paper, losing Eddie Murphy—the biggest movie star on the planet—and replacing him with the (at the time) no-name Hicks seemed like a net negative, but it ended up making the film work better than anyone could have possibly expected: Gillian’s take-no-prisoners attitude about protecting these marvelous creatures makes for a compelling, fascinating character, a great addition to the Star Trek universe.

After Kirk and the rest put all the pieces of their cockamamie plan together, they time warp themselves back to the 23rd century, where the whales (George and Gracie) do what was hoped, and respond to the probe. The probe takes off, not realizing it almost destroyed the whole planet, leaving only the messy details of what to do with the renegade Enterprise crew.

Luckily, cooler heads among the Federation prevail, and all but one of the outstanding charges are dismissed. The lone punishment is aimed at Kirk, who is “demoted” from admiral back to captain. And wouldn’t you know it, being a lowly captain means he gets to command a starship again!

I saw Star Trek IV: The Voyage Home during its original theatrical release, and I can tell you the applause you see break out from the characters in the background of the trial scene was matched by those watching in the theater.

But it’s not just Kirk who gets something in the end: Spock has come out of this mission a more humane, balanced figure than he was before. He meets with his father, Sarek (Mark Lenard), and when Spock tells him to tell his mother “I feel fine,” this simple line hits like a thunderbolt. In addition, Kirk finds that Gillian (who jumped aboard the ship at the last second and is now living in the 23rd century) has been commissioned to work in the Federation’s science department. After a quick peck on the cheek, she’s gone, off to have adventures all her own (was I the only one wanting to see a Gillian Taylor: Space Scientist spin-off series?).

And if all that weren’t good enough, the film ends with one more wonderful moment, the culmination of the events of this unlikely trilogy we found ourselves in. The crew of the Enterprise is assembled to board their new ship: After gliding past various vessels, we see…it’s the Enterprise. The final shot has everyone back at their familiar posts, with Kirk asking “Let’s see what she’s got.” The ship launches into warp speed, cutting right to the credits as composer Leonard Rosenman’s rousing score plays behind them.

No matter how many times I have seen this movie, this quick edit never fails to elicit a stupid grin on my face. It’s the cherry on top of this particular sundae, and a pitch-perfect way to cap off this glorious adventure.

After two films that worked so well, critically and financially, it took real creative guts for Nimoy and crew to change the tone so dramatically and offer us such a light-hearted tale. But it ended up being the right call; after all, after you’ve killed Spock, Kirk’s son, and blown up the Enterprise, what can you do to raise the stakes? Go grimmer?

Nope—instead we’re treated to some of the finest, warmest moments these beloved characters have ever had: McCoy’s delayed response when he realizes Kirk and Spock plan to go back in time (“Now wait just a damn minute…”), Scotty’s snobby attitude toward 20th century tech (“A keyboard? How quaint.”), Spock making quick work of a noisy punk on a public bus, not to mention the extended sequence of Chekov as he is chased then interrogated by confused Navy personnel, ending with him imagining he is “Admiral” Chekov.

Star Trek IV: The Voyage Home was a massive hit, an even bigger one than the two films that preceded it, an almost unheard-of event for a movie franchise. It went on to be the most financially successful installment of the series, and remains a high-water mark (sorry) for Trek adventures. Not only is it my favorite Star Trek movie, it’s one of my favorite movies, period. It’s an adventure with a capital A and it caps off what ended up being an accidental trilogy, buried inside a larger film series, another very unusual event.

Star Treks II, III and IV fit together like puzzle pieces, each adding immeasurably to the film that precedes it. And for those of us who love the crew of the USS Enterprise, ending a journey that was riddled with so much pain and death with something so sweet—returning home—was just a perfect grace note.

Kirk, Spock, McCoy and the rest would never have it this good again, and neither would we.

Post Script: On a more personal note, Star Trek IV: The Voyage Home’s creative use of San Francisco and the surrounding environs cemented my nascent love for that particular city. The last time I was there, I found myself jogging through Golden Gate Park, and I checked to see if there were any invisible spaceships around.

Rob Kelly is a writer/artist/comics and film historian. He is the co-host of The Fire and Water Podcast (and the host of its sister show, The Film and Water Podcast), the co-creator and writer of the award-winning webcomic Ace Kilroy, and the creator of the book Hey Kids, Comics!: True-Life Tales From the Spinner Rack. He always feels like he has 300 years of catch-up learning to do.