A Silver and Bronze Age goldmine! 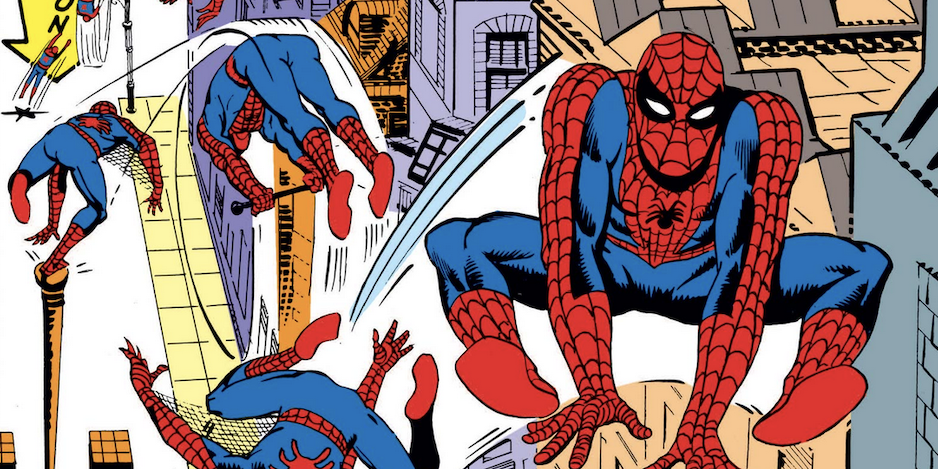 Marvel’s Facsimile Edition program — reprints that include ads, letters, the whole shootin’ match — is back in a big way in April, with three issues that celebrate Spider-Man.

Dig these solicitations, released Friday by the House of Ideas: 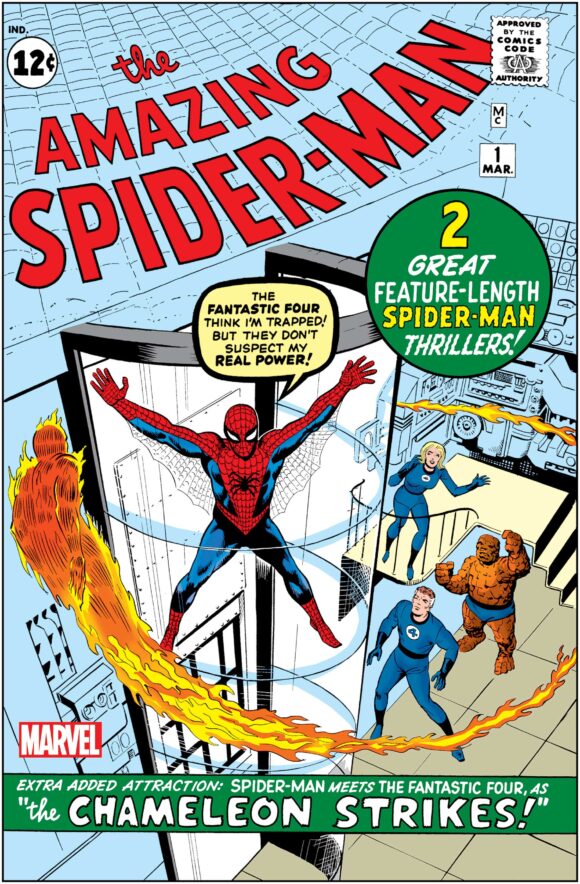 Re-presenting the inaugural issue of Spider-Man’s iconic ongoing series, which followed fast after the wall-crawler’s blockbuster debut in AMAZING FANTASY #15! Peter Parker has been bitten by the radioactive spider, gained incredible abilities, donned his colorful costume and learned a tragic lesson about power and responsibility – and now it’s time for him to swing into action! But can our young hero rescue a crew of astronauts aboard their malfunctioning shuttle? Even if he does, he’ll still end up Public Enemy No. 1 as far as journalist J. Jonah Jameson is concerned! Then, Spidey shows off his skills in a bid to join the Fantastic Four – and comes face-to-faces with his very first super villain: the identity-stealing Chameleon! It’s one of the all-time great Marvel comic books, boldly re-presented in its original form, ads and all! Reprinting AMAZING SPIDER-MAN (1963) #1. 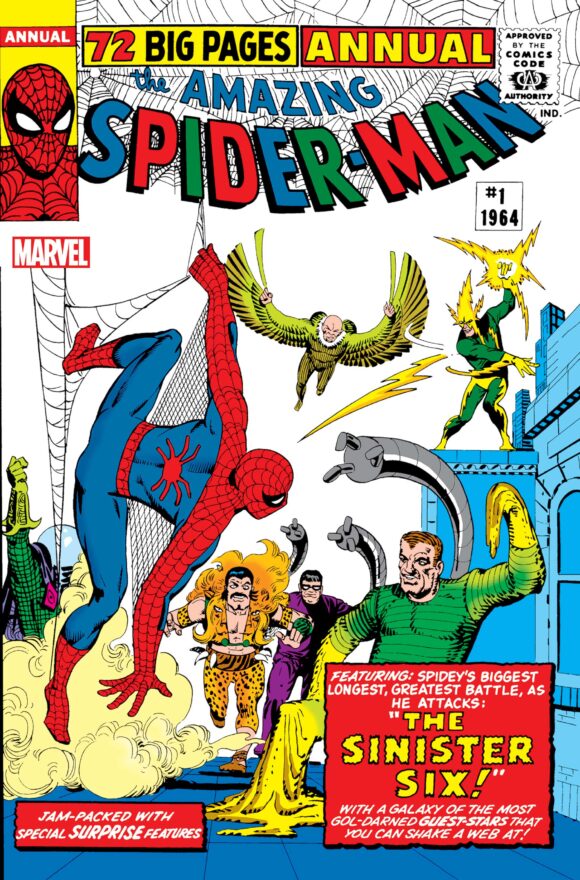 Doctor Octopus! Electro! Mysterio! The Vulture! Sandman! Kraven the Hunter! Individually, each of these deadly foes tested Spider-Man to his limit during the early years of his web-swinging adventures. So how can Spidey possibly hope to survive when they band together as what can only be called the Sinister Six? Find out in this landmark first-ever Spider-Man Annual from the brilliant minds of Stan Lee and Steve Ditko at the peak of their powers! Peter Parker is in for the fight of his life against a sextet of super villains – and every single battle along the way makes a great, big splash! And don’t miss all the inventive extras you’d expect from a classic Marvel Annual! It’s one of the all-time great Marvel comic books, boldly re-presented in its original form, ads and all! Reprinting AMAZING SPIDER-MAN ANNUAL (1964) #1. 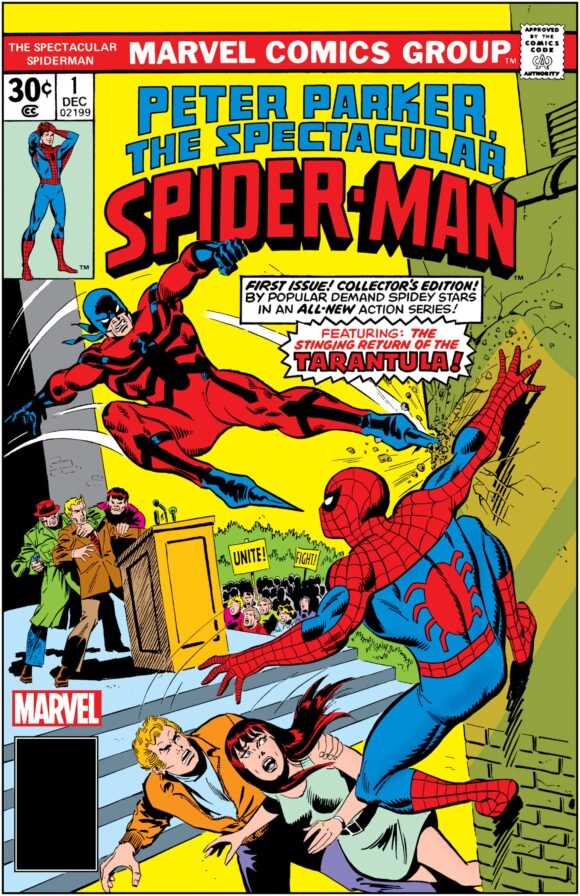 By the mid-1970s, Spidey fans could thrill to their favorite hero’s escapades in AMAZING SPIDER-MAN, his high-octane encounters with other super-types in MARVEL TEAM-UP, his all-ages adventures in SPIDEY SUPER STORIES and reprints of classic stories in MARVEL TALES – and still it wasn’t enough! Such was the clamor that a second solo title debuted with a focus on the man beneath the mask: the always popular Peter Parker! But fear not, there’s plenty of costumed action in this frantic first issue – and when the deadly Tarantula strikes at Peter’s university, it’s Spidey who feels the sting! Will the Tarantula claim the mayor’s life, or can our wall-crawling Web-Head save the day in suitably spectacular fashion? It’s one of the all-time great Marvel comic books, boldly re-presented in its original form, ads and all! Reprinting SPECTACULAR SPIDER-MAN (1976) #1. 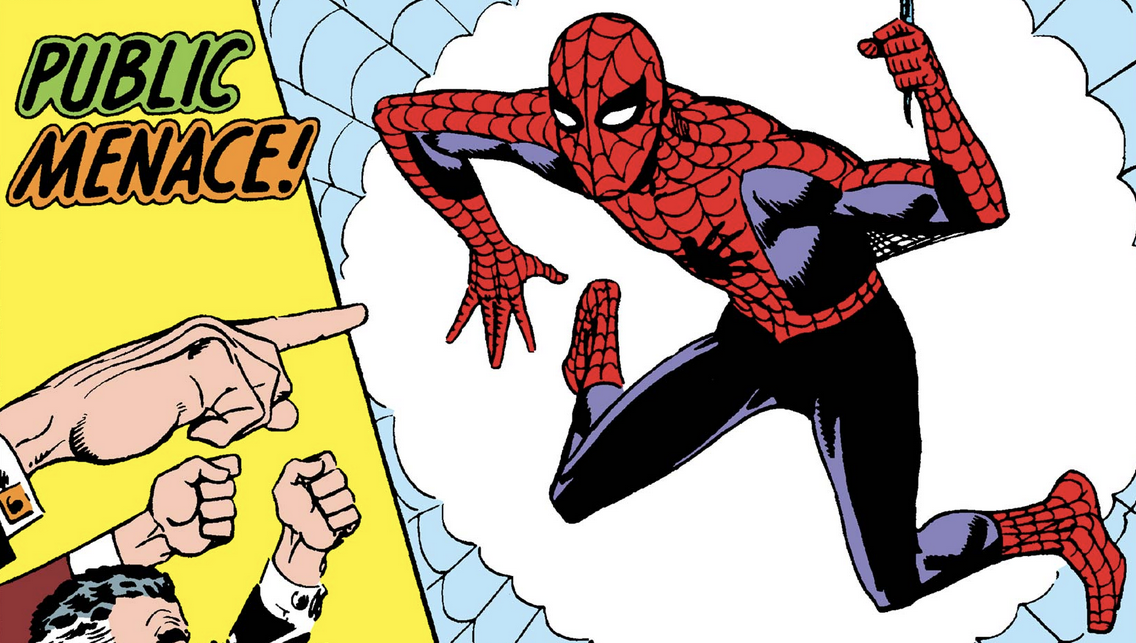 — This is the biggest month for Marvel’s Facsimile Editions since before the pandemic and this roaring return is a welcome sight. Unlike other reprints, Facsimile Editions are like little time machines that convey a real sense of time and place. I dig ’em, big time.

— Why April for this tremendous trio, when Spidey’s 60th anniversary isn’t until June? Simple: Marvel is rebooting ASM to #1 the same month, written by Zeb Wells and featuring the return of prodigal son John Romita Jr.