These BATMAN Comics Need to Be Published RIGHT NOW

A brilliant synthesis of why the Dynamic Duo endures…

The vast majority of time and energy I spend on 13th Dimension involves comics published for posterity by major and minor publishers. Makes sense, of course.

But every so often I come across an “unofficial” project that’s so special, so exciting, it just begs to be printed.

Case in point: Artist/writer Jacob Edgar’s series of Batman Adventures black-and-white strips. If DC ever decides it wants to give the world an all-ages Batman book that will appeal to Batman ’66 fans, Bronze Age fans, Batman: Year One fans, Batman ’89 fans, Batman: The Animated Series fans, Gotham Central fans, and younger fans — that’s a helluva range right there — they gotta give Edgar a try. 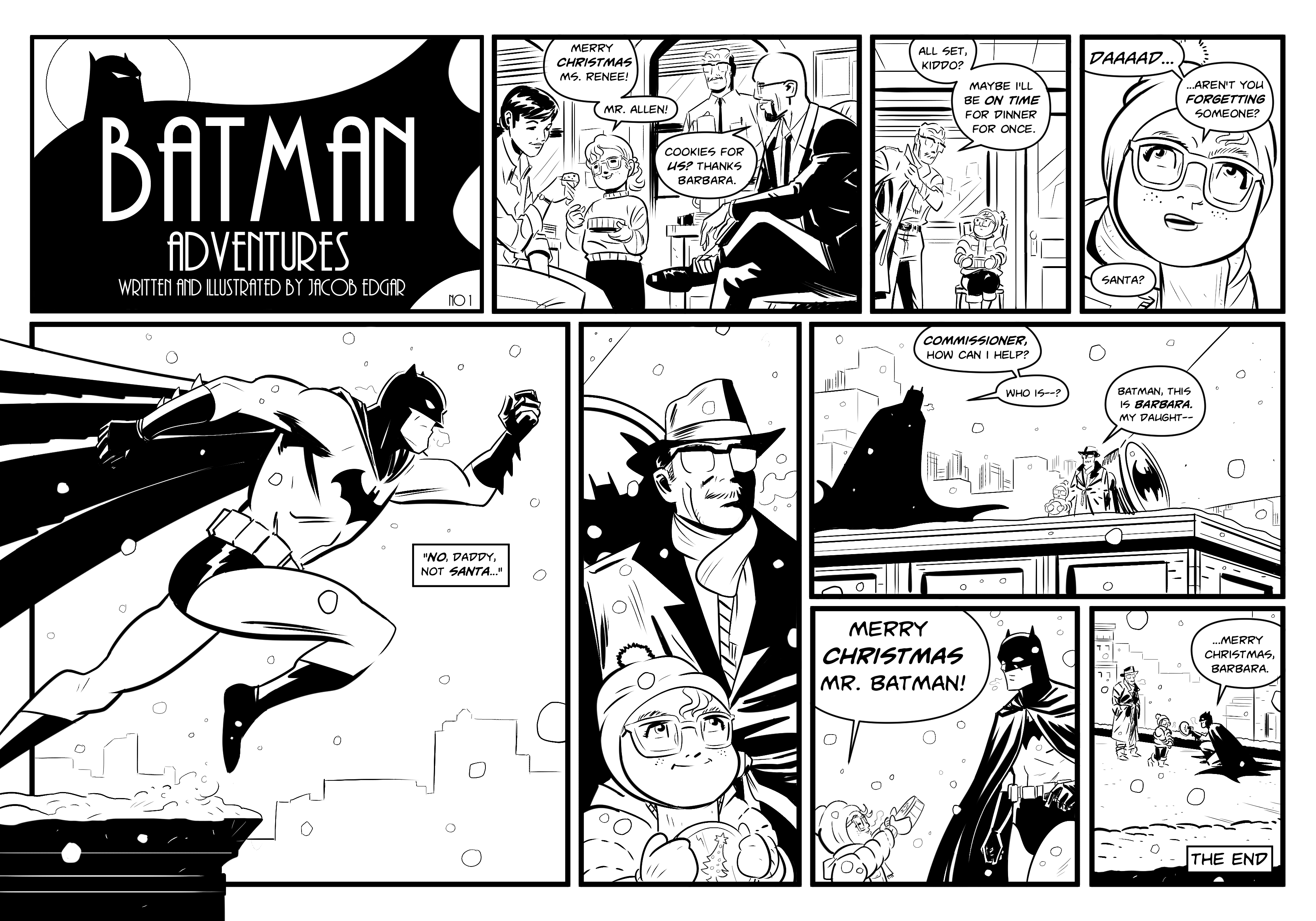 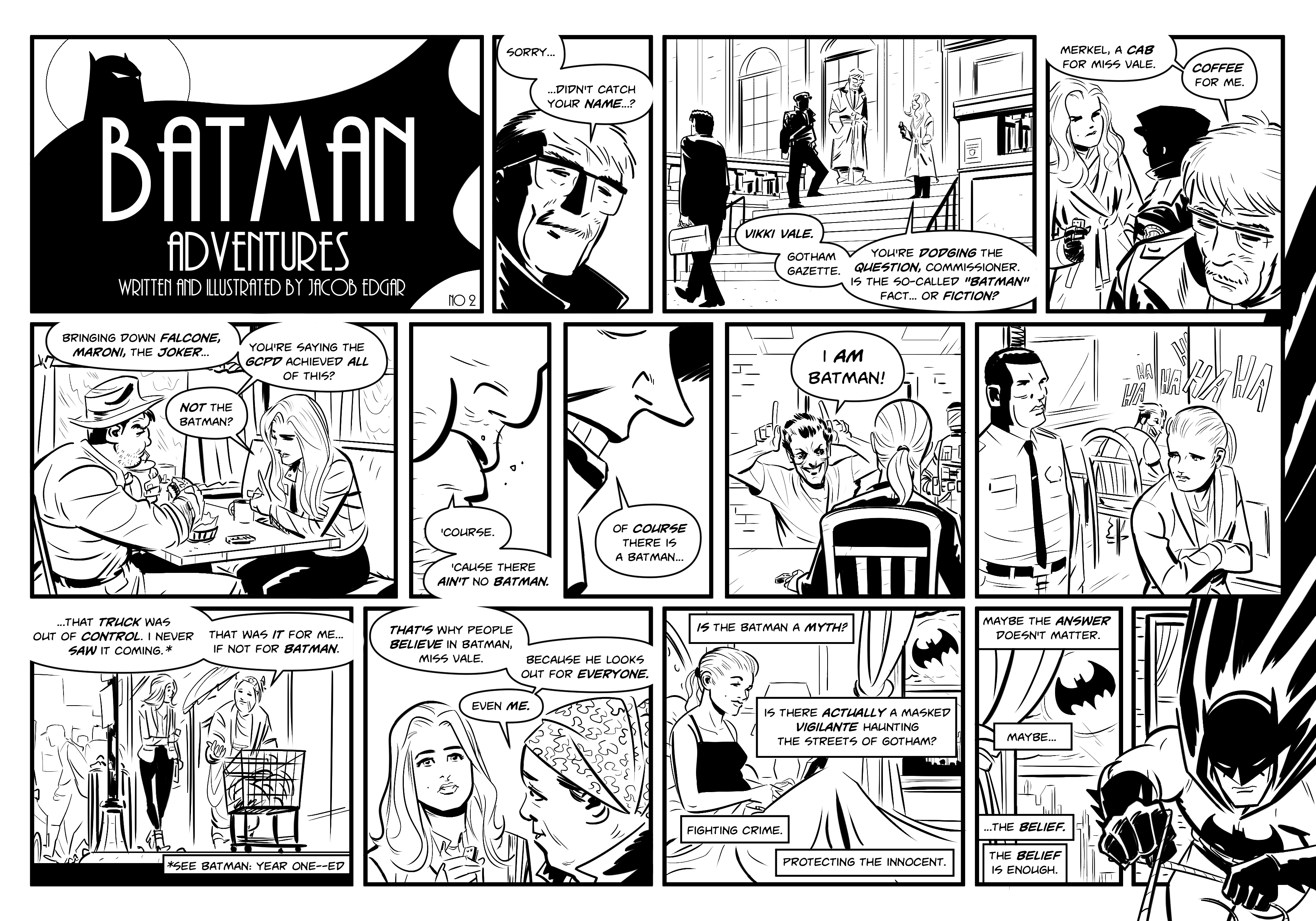 “I guess it was early 2019, I started putting out these one-panel gags of Batman and Robin,” Edgar — currently the artist on Dynamite’s Death to the Army of Darkness — explained. “They were my response in a way to a lot of the Batman and Robin media that had come out recently. Not so much in comics, but more so TV and movies. Not to disparage anyone else’s work — there are certainly a wide variety of Batman interpretations and all of those have their own merits and fans — but I think seeing what I didn’t respond to, tonally, really helped me solidify what my take would be. In terms of writing. 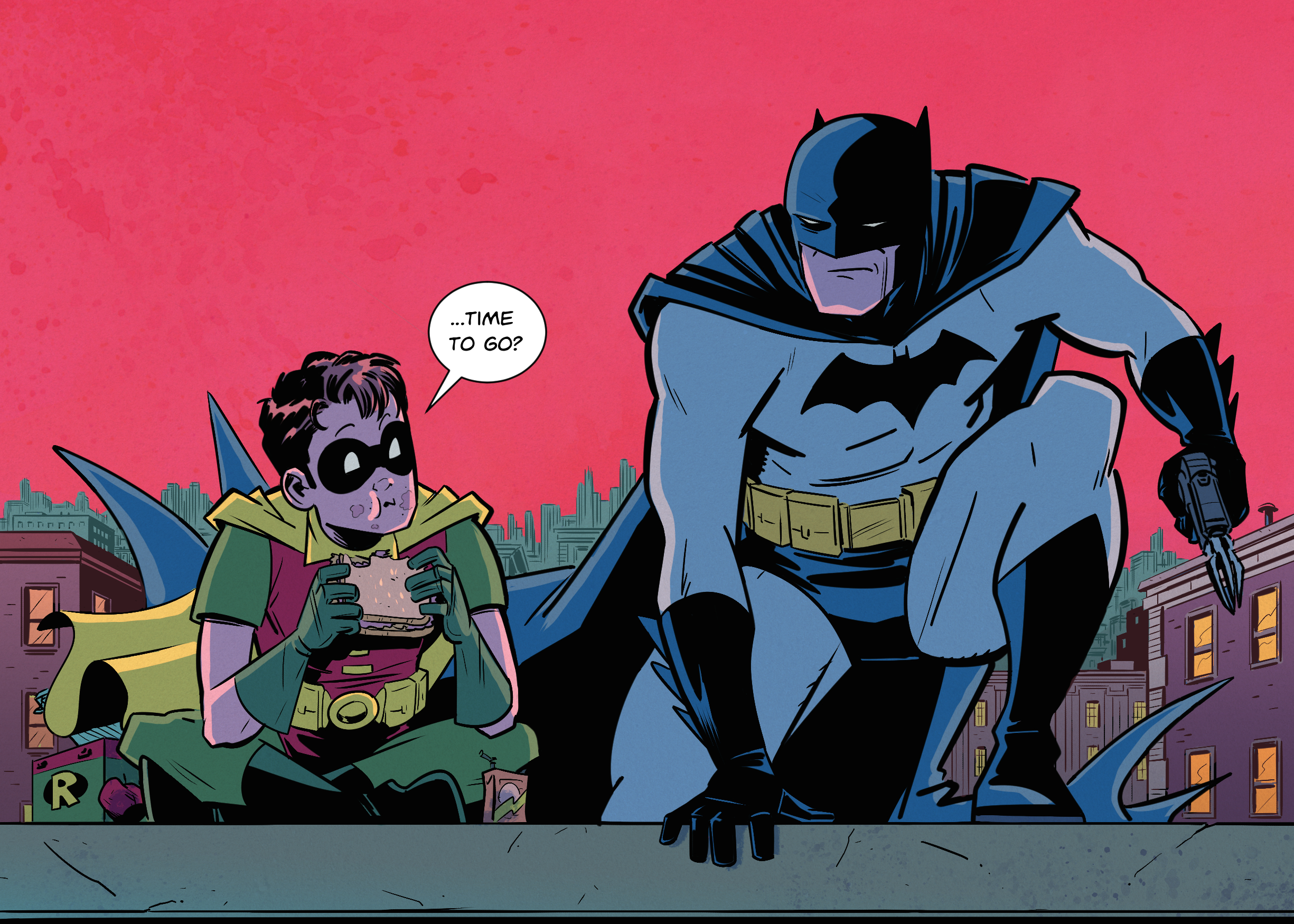 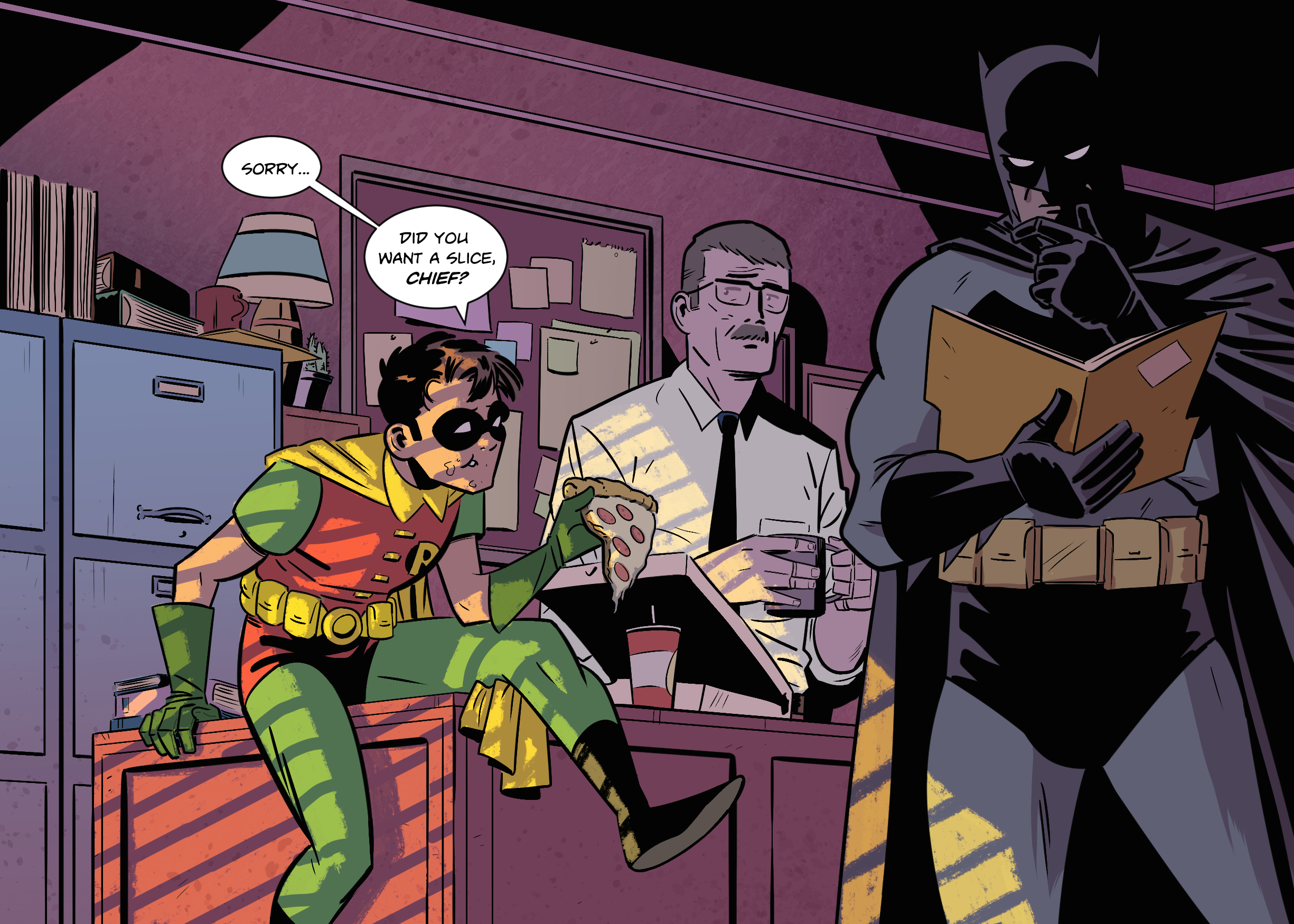 “After a few of those gag illustrations I got the itch to write actual stories and really flesh out the ideas in my head,” Edgar added. “It’s a good problem to have, but I’ve had so many other projects I’ve been working on, some of them with actual publishers and deadlines, I didn’t have a ton of free time to spend in Gotham. So I came up with the idea of one-page strips, similar to old newspaper comics. Originally, my intent was to use any so-called ‘warm-up drawing’ to work on them. Instead of just sketching something, why not spend a little time here and there making a comic strip? Eventually it’s done, and I could get a little of my writing out in the world. I’ve been published as an artist but never as a writer, so this was a fun way to get some writing work out there.”

13th Dimension readers may recall that I’ve been agitating for quite some time for a classic Batman and Robin book — Bruce Wayne and Dick Grayson — done with a modern sensibility: an early years portrait that would allow for drama, adventure, high stakes — and a little humor. Y’know, a fun-yet-shadowy comic where you don’t have to worry that the Darknight Detective is going to have his 19th nervous breakdown or that Bruce and Dick (or Jason or Tim or Damian or Carrie or Cassie or Kate or Stephanie) will start throwing punches at each other.

Edgar’s strips would seem to capture that very notion. Here are a couple more: 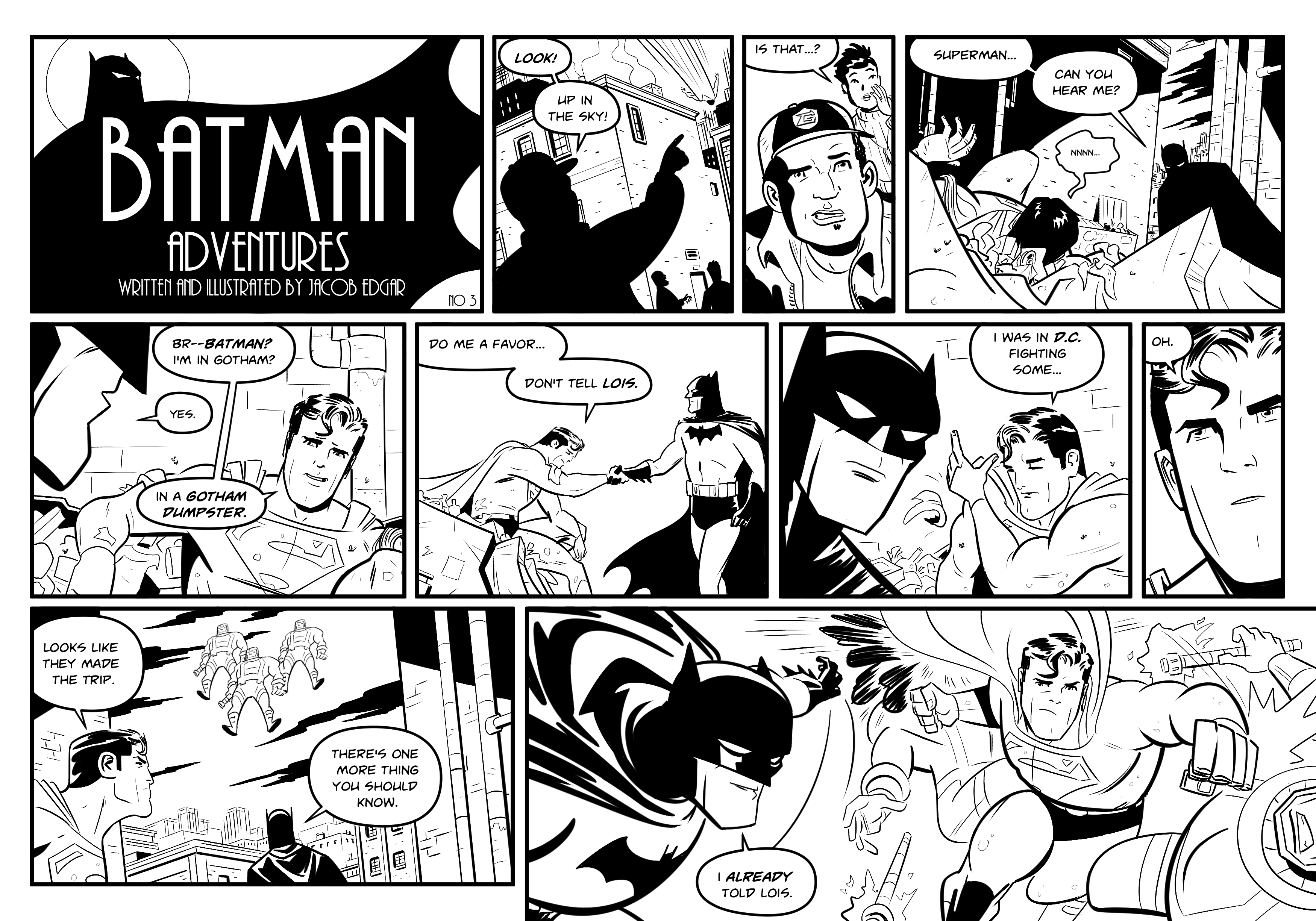 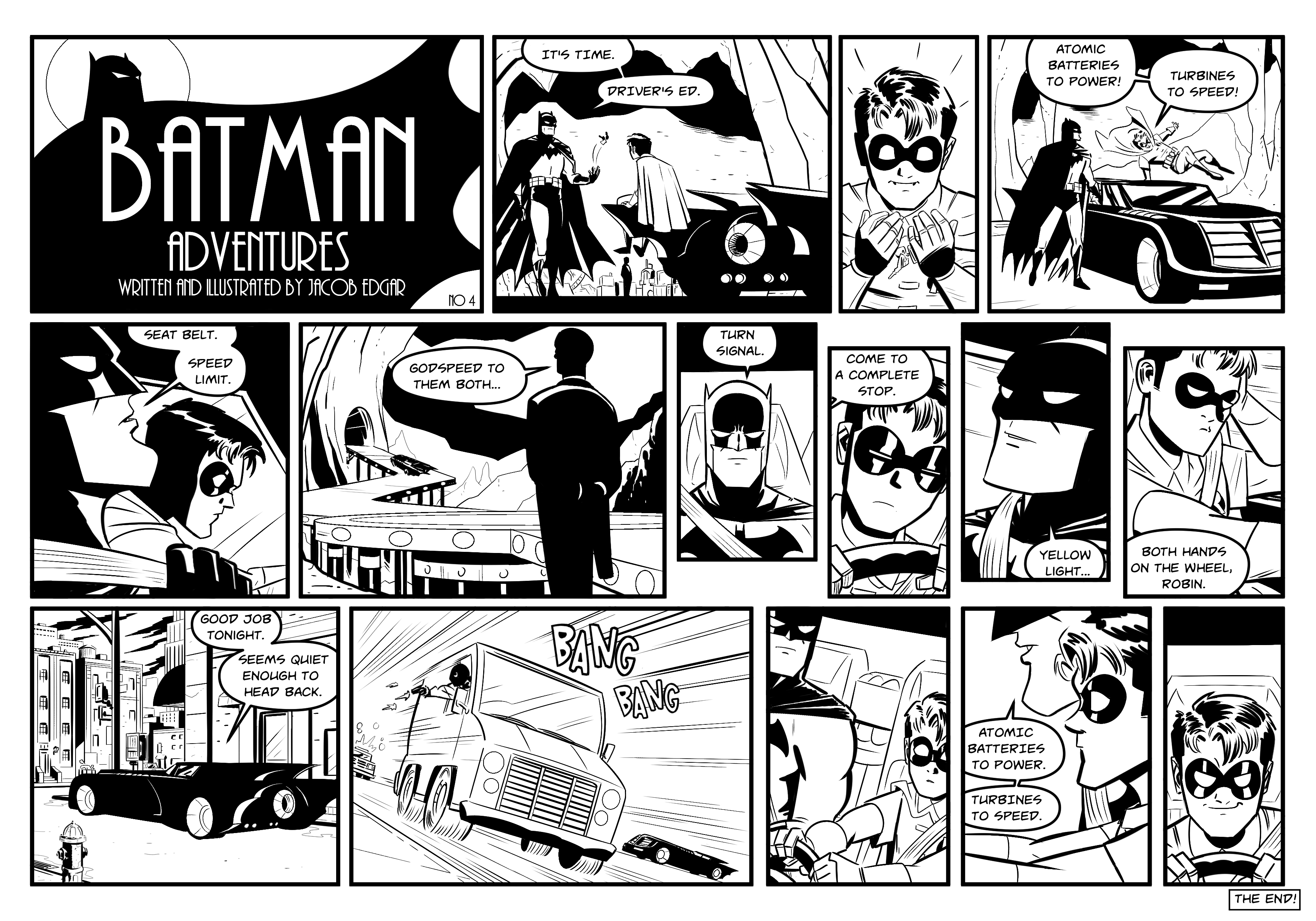 “If you look at the first couple of strips compared to now, you can tell they’re a bit looser, less defined backgrounds, not overly polished,” Edgar said. “As the strips got more and more notice on my social media, my perception of them evolved a bit, where I’m more conscious of them as resume material. So the drawing has become much more involved and time-consuming. I definitely can’t call them warm-ups anymore! Once I started doing the Superman stories, I think the motivation was essentially the same. I just wanted to play out in stories what MY version of Superman would be like.”

Superman? You mean there’s more Superman? You bet there is. And we’ll be showing that off soon enough. (UPDATED: Click here to check ’em out!)

But for now, here’s one more Batman strip — the clincher. 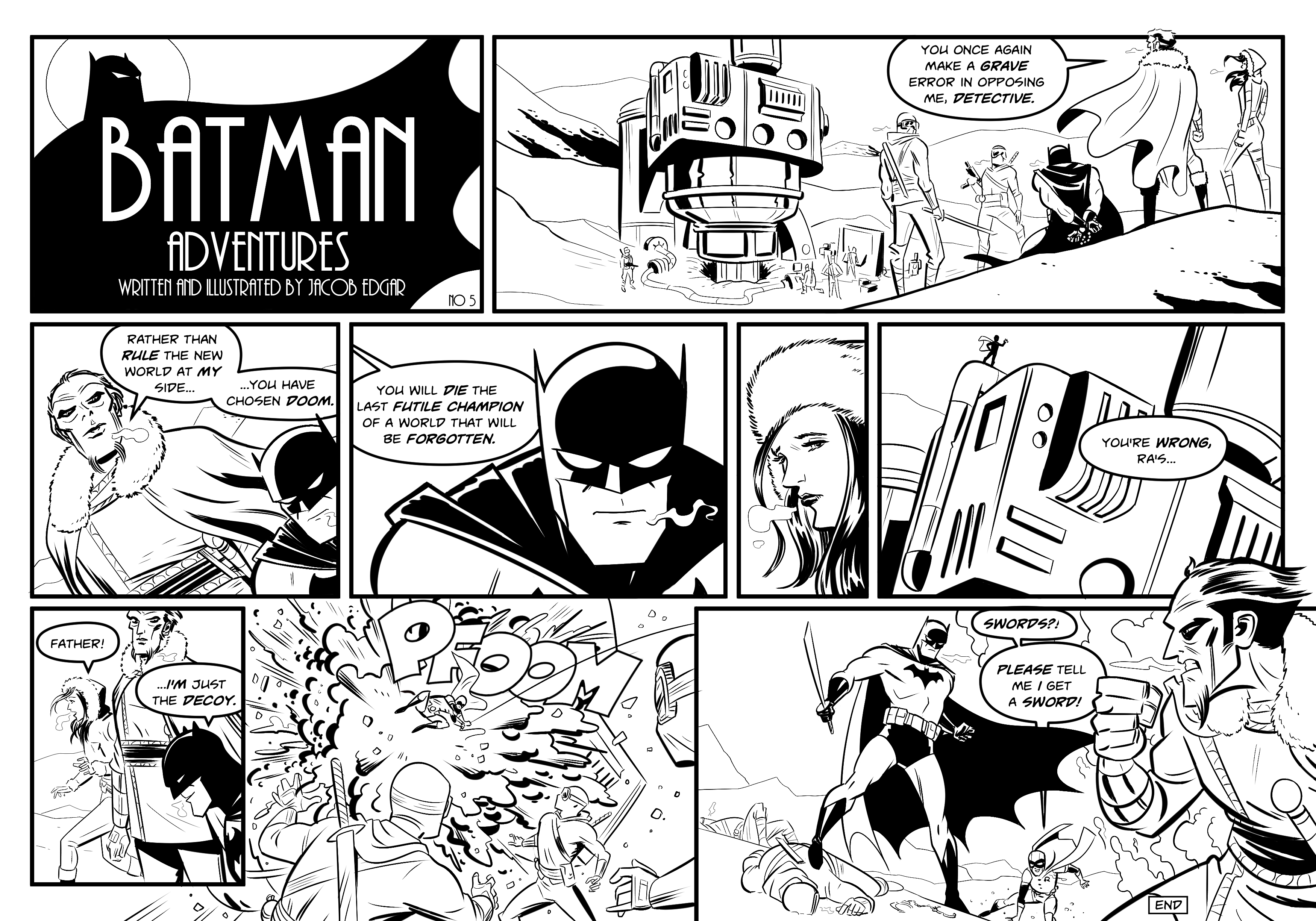 I mean, COME ON! And Ra’s doesn’t have eyebrows! Brilliant!

“I definitely plan to do more Batman,” Edgar said, “It gets a little tough at times because some of the ideas or scenes that I come up with, I want to save those for if I ever win the lottery of actually getting to write and draw Batman for DC. So I have a few ideas I’m holding onto that I don’t want to just release into the Twitterverse. But I’ll do more Batman for sure. And I have some ideas for Marvel strips too, which I’ll get to eventually.”