Yep, he did ol’ Matchstick…

Comics great George Perez announced his retirement this month (click here) and we’re celebrating his illustrious career across 13 days with the TOP 13 GEORGE PEREZ COUNTDOWN — ranking his best work going back to his professional beginnings in the 1970s. I’m personally most familiar with Perez’s DC output, so I’ve enlisted 13th Dimension contributor Anthony Durso to make the daily picks. (He also made that fancy banner.) Get your arguments ready, folks! — Dan

Pick #12 was Fantastic Four. (Click here.) Next up on the countdown:

At the time he began working on the higher-profile revival of The New Teen Titans, Perez was already quietly illustrating a back-up feature in The Flash, starring Firestorm. Fresh off his stint as a newly minted member of the Justice League, it was Firestorm’s first time headlining a series since his original five-issue run ended with the DC Implosion. Although Perez’s period on the back-up lasted only five issues, he helped to make the Nuclear Man a star worthy of his League status — and he and writer Gerry Conway would continue to develop ol’ Matchstick during their time together on JLA. — Anthony Durso. 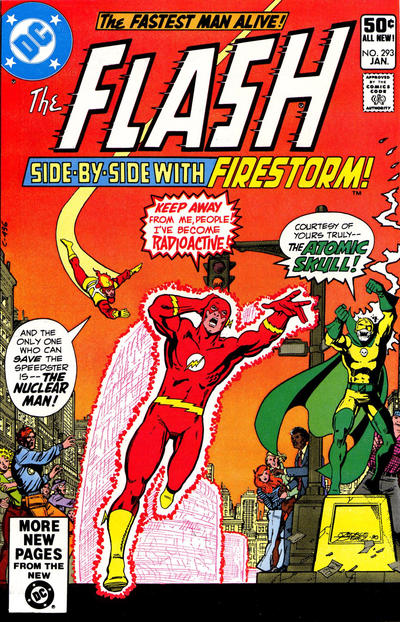