BRONZE AGE BONANZA: You can just hear the lamentations of their women…

Last month was a bit lackluster, but now we’re back with a number of bona fide classics — and covers that should be.

13. Archie Giant Series #178, Archie. There were a gazillon summer-themed Archie issues that came out this month (natch), but this one was the most colorful. I also dig the perspective. And boy, Archie’s enjoying the gag, isn’t he? 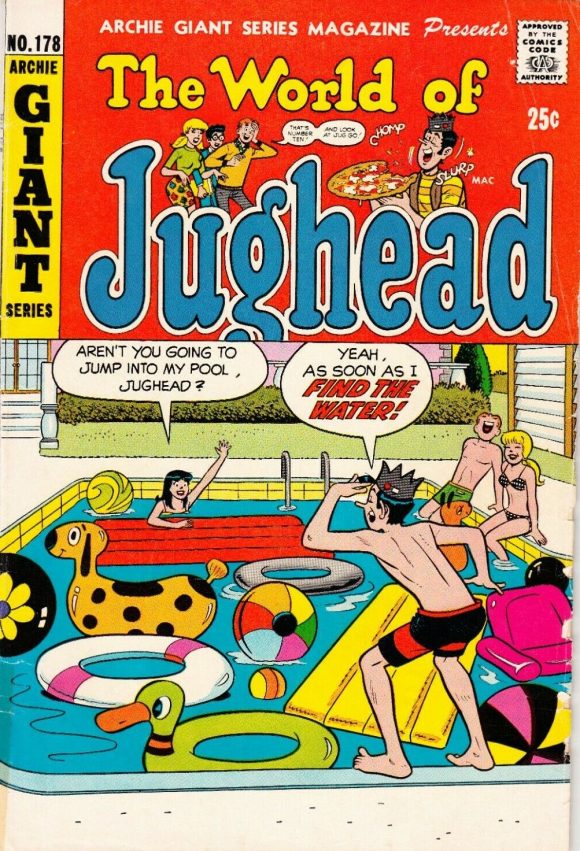 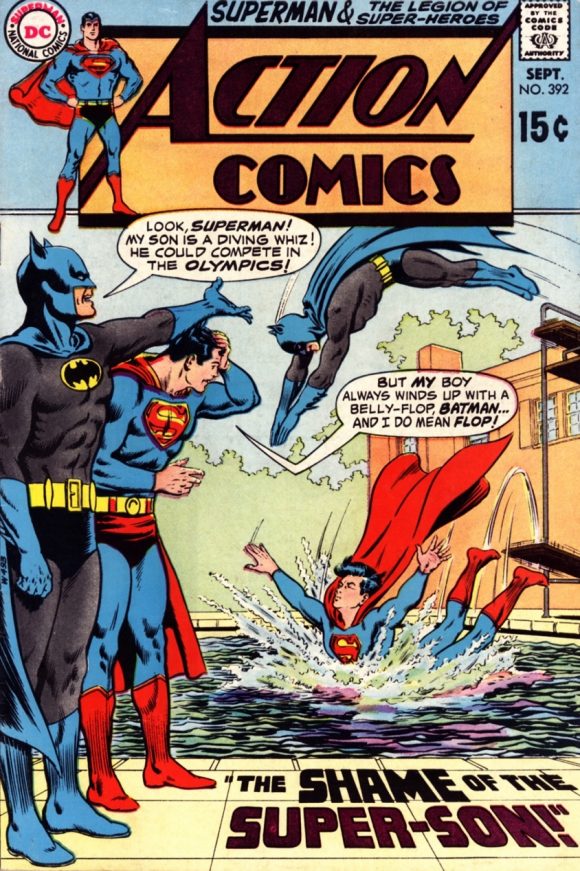 11. Aquaman #53, DC. More water! Of course, this is Aquaman we’re talking about, so it figures. Nick Cardy could do just about anything and he was particularly adept at giving Aquaman covers an unsettling, horror feel. Not sure who the colorist was but the palette gives the whole thing an appropriately polluted feel. 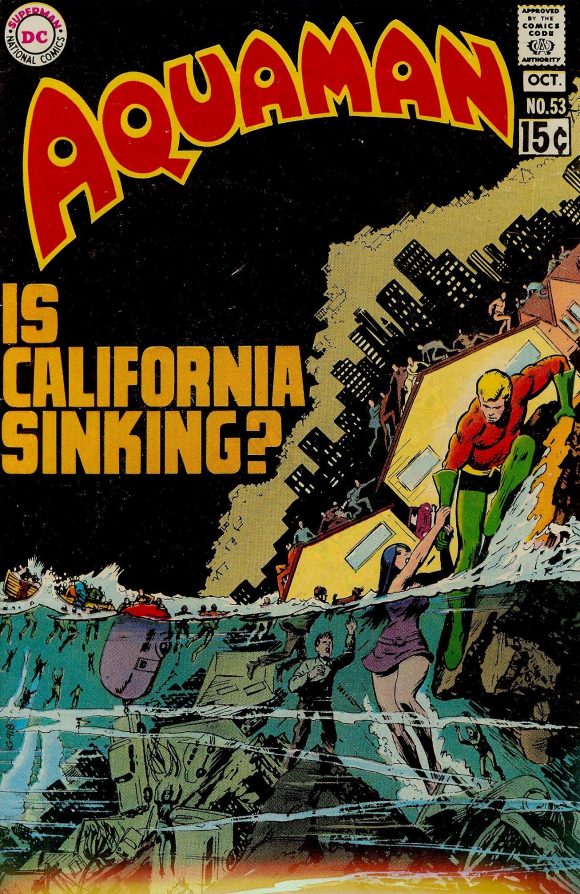 10. Daredevil #68, Marvel. This cover asks so many questions, but what I’ve always appreciated was DD’s body language, especially the taut way he’s pulling at his mask with a grimace. Marie Severin would be a superstar if she were working today. I’ve said this before, of course. 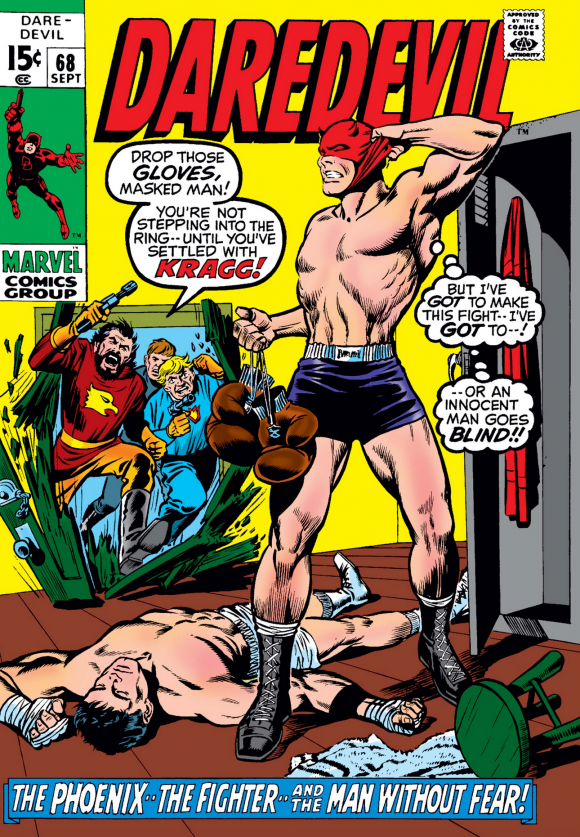 9. Fantastic Four #103, Marvel. The first issue without Jack Kirby interiors but John Romita and John Verpoorten seemed hell-bent on telling readers that this would remain a kinetic, action-packed series. Lots going on here and Romita gives it that oomph by training the reader’s eye in a satisfying circular motion. I just dig how this is framed. Oh, and more water! 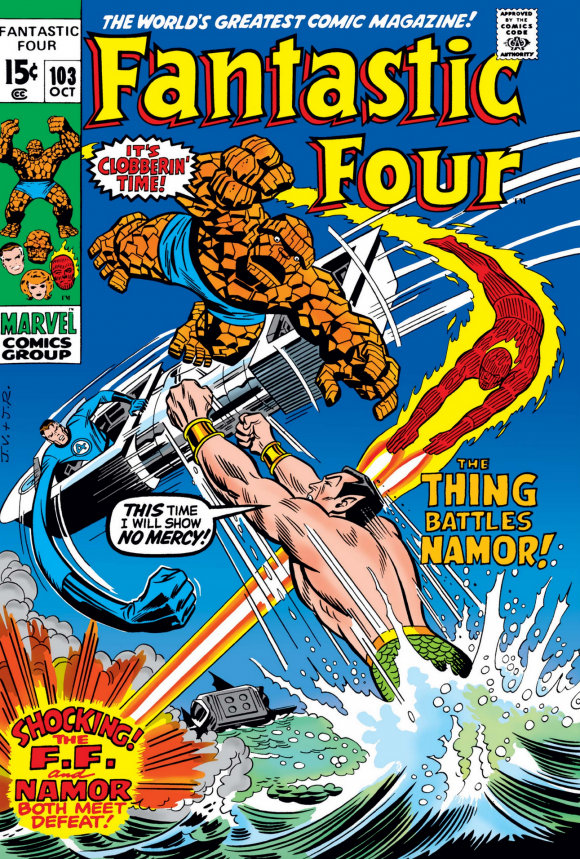 8. Wonder Woman #190, DC. DC injected a lot of horror themes in its superbooks in the early ’70s and this cover plays like an especially sinister version of the Scooby-Doo show opening. Those magenta eyes! 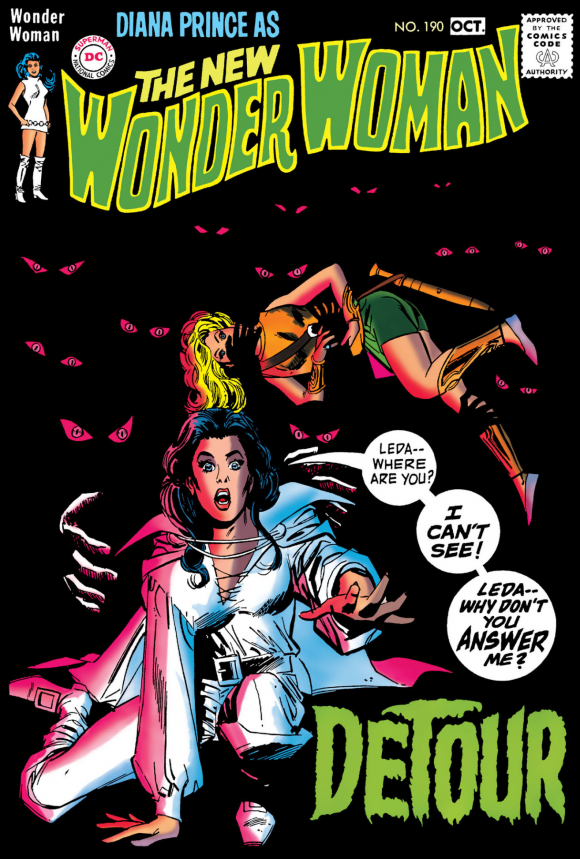 7. Superboy #168, DC. The people turning on the hero is a hoary chestnut but Neal Adams gives it such drama because, well, y’know, he’s Neal Adams. Great perspective and bold presentation of the classic Super-costume and pose. If I have a quibble it’s that the Teen of Steel seems a little overmuscled given his age. But hey, who am I to question a master? 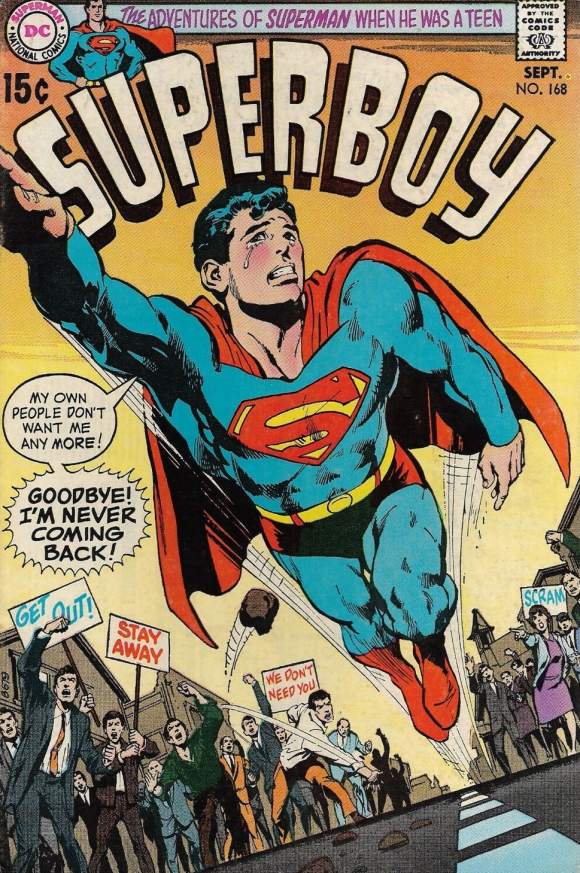 6. Detective Comics #403, DC. Classic Adams visual trickery, with the misty fog effect. This isn’t one of my favorites by the artist — just personal taste, mind you — but you have to give big props to the mad skill. The following year, Adams would improve upon the concept with the classic Batman #232. 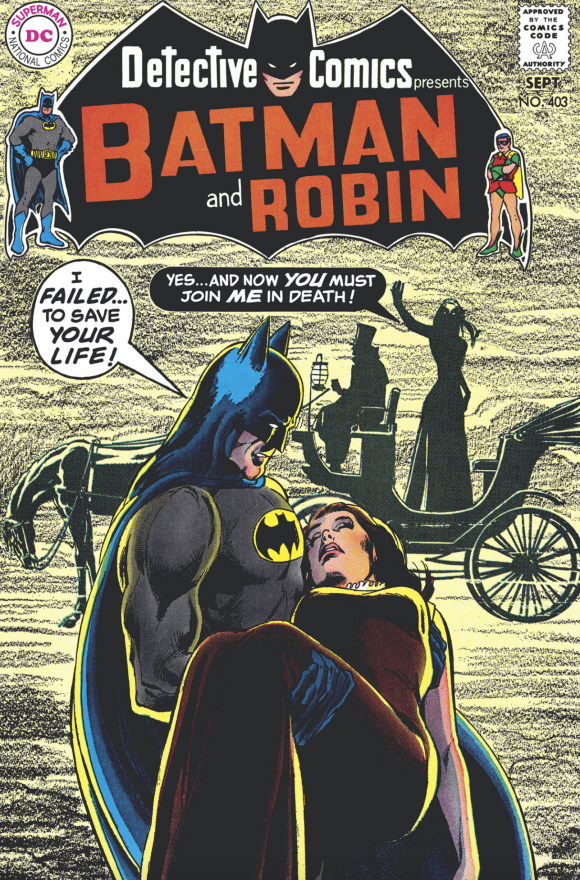 5. The Amazing Spider-Man #89, Marvel. I tend to prefer covers that are a single, basic image as opposed to a sequence. But when it works, it works. This is classic Romita Spidey — and a classic issue besides, leading up to the death of Capt. Stacy. 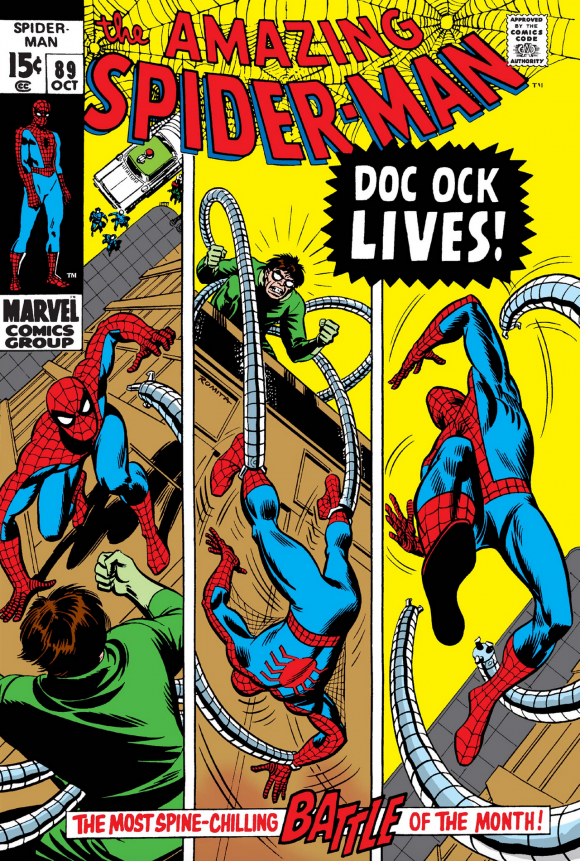 4. Super Dc Giant #S-17, DC. Truth to tell, I’d never seen this Cardy cover until I researched this month’s feature. But man does this, ahem, pop. Most romance covers are a combination of camp and unrequited longing. This one is just plain HOT. And more water! (Summertime, folks. Summertime.) 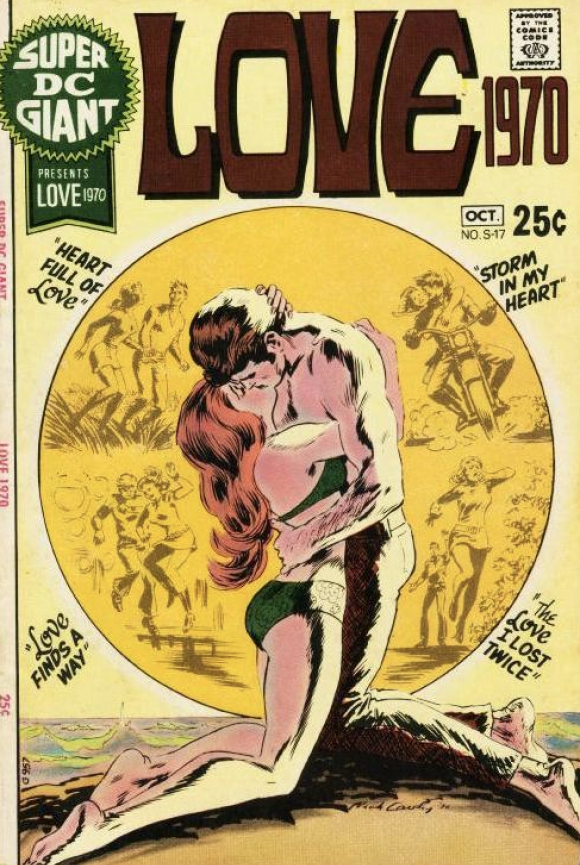 3. Strange Adventures #226, DC. Just an absolutely jarring primary image by Joe Kubert, made even more effective by the eight portraits. (Note to DC in 1970, though: Africa is not a nation.) It’s kind of unfair that the grim main visual has to play off the much more Silver Agey promos on the left, but all that white on the cover only serves to frame the bright colors central to the overall presentation. Knocks your socks off, doesn’t it? 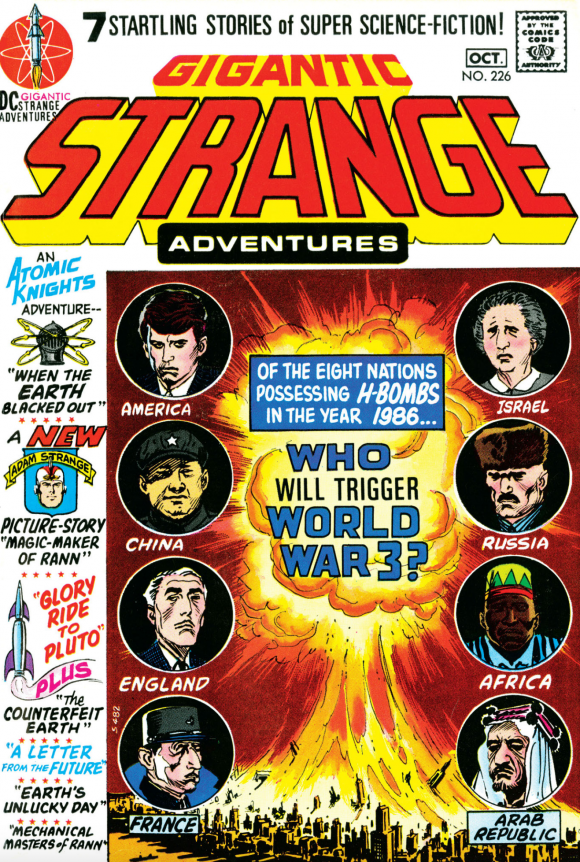 2. Adventure Comics #397, DC. An all-time classic, and one of the best-known Supergirl covers ever. I kind of like Business Suit Supergirl but no matter what it’s a real kick that DC would dedicate a cover to fans’ contributions. 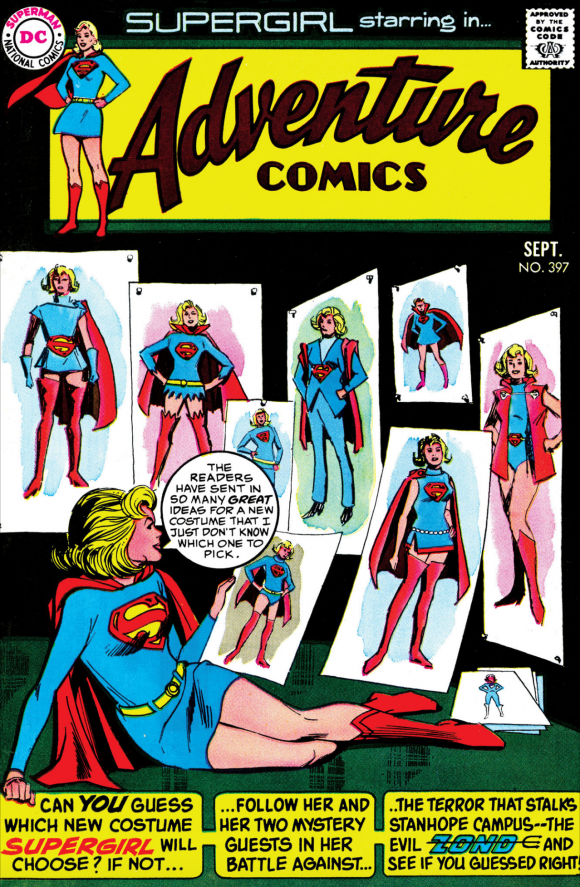 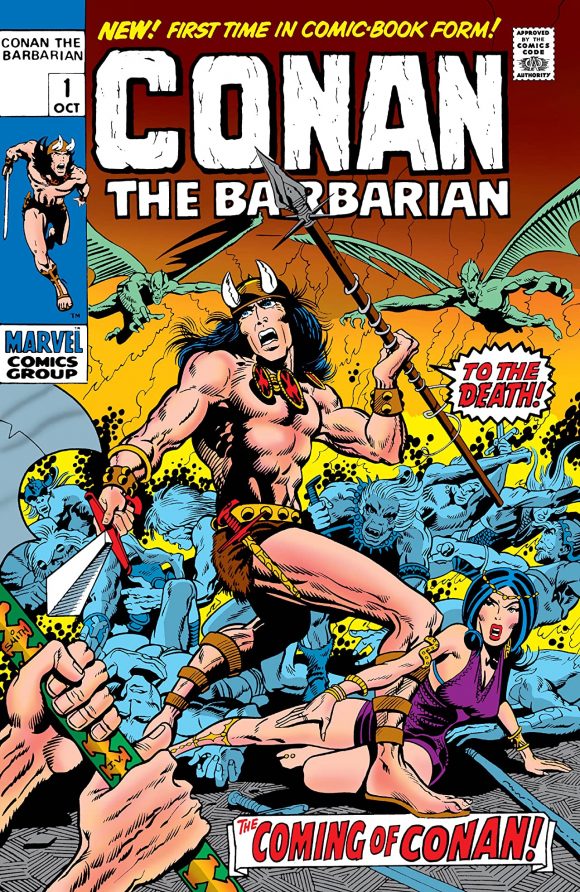