UPDATED 10/1/22: Halloween’s a-comin’ and we kick off October with a 13th Dimension tradition — an INSIDE LOOK at Disney’s Chilling, Thrilling Sounds of the Haunted House that first ran in 2017. Dig it! — Dan

Man, I love Halloween. I always have. The candy, the costumes, the crunchy leaves underfoot. The whole bit.

The last few years, to really get myself into the mood of the season — as if it were necessary — I’ve dusted off Disney’s Chilling, Thrilling Sounds of the Haunted House, an album of sound effects and oddball stories that my sister Paula had when we were pretty young. (I was 6 and Paula was 11.)

I say “dusted off” in the metaphorical sense because while Paula’s version was a vinyl LP with an orange cover, my current copy was downloaded from iTunes. 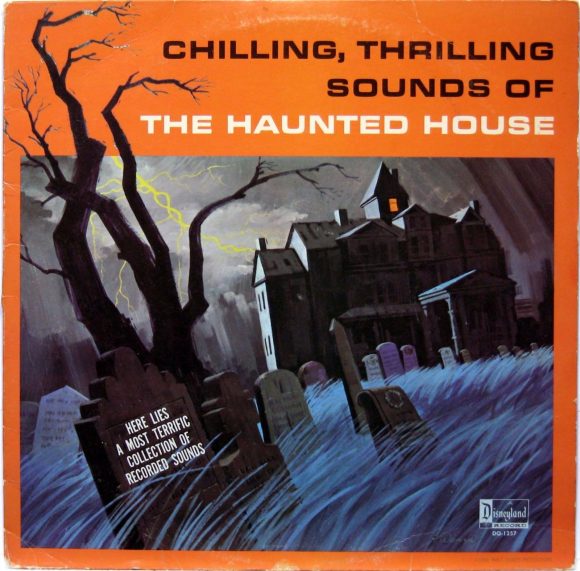 So there I go, walking in Manhattan twilight, while my earbuds fill with odd moans and shrieks and barks and screeches. You should try it some time.

Anyway, I love listening to this thing. The first side features snippets of narration by Laura Olsher setting the scene, usually told in the second person: “You are a bold and courageous person — afraid of nothing…” or “Once, as a child, you were frightened by a huge, snarling dog…”

Her words then give way to the track’s thematic sound effects: a long-burning fuse that leads to an explosion and horrid scream; a cat that loses its mind, becoming a feral creature on the attack; even a cruise liner that finds itself smashing into shore.

Olsher’s clearly having the time of her life, hamming it up with a voice that’s filled with delicious, devious portent. And the sound effects themselves, conjured from the Disney vaults, are at once alarming and hilarious. (The second side features similar effects but without narration.) 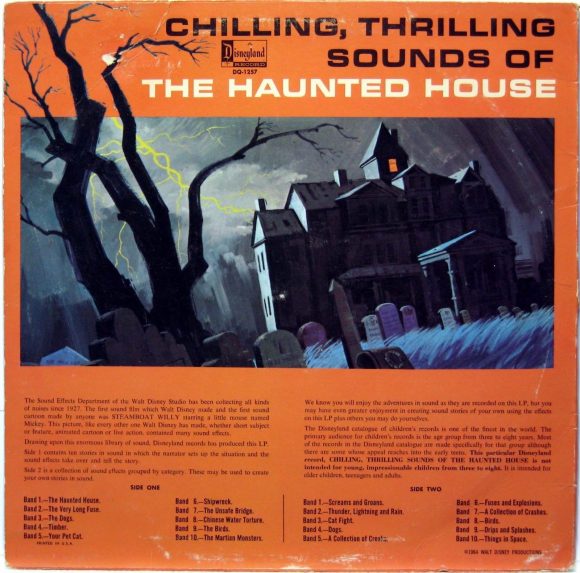 The first track — The Haunted House — is the longest at 2:59 and acts almost like an overture, featuring many of the sound effects that will be heard elsewhere on the album. It’s a really winning, atmospheric mix and lays the foundation for the rest of the record:

Most of the tracks clock in at under 2 minutes and are fairly straightforward. But two of them really stand out.

One is Chinese Water Torture, a classic example of racist mid-century Americana. It begins, “The ancient Chinese were a very clever race” and segues into the description of said torture method. Then there’s the sound of a waterdrop hitting. And another. And another. And another. It keeps going like that, with the drops interspersed with brief pauses and what sounds like chairs scraping on the floor. The tension just keeps mounting.

Then, finally, mercifully, the “subject” cracks — and the narrator starts babbling in a stunningly fake Chinese dialect. She catches herself and says, startled, “What am I saying — I’m not even Chinese!”

As idiot kids, we screamed with laughter. As an adult living in more enlightened times, it’s profoundly shocking.

But my favorite bit is the final cut of the first side — The Martian Monsters — which sets you up as an astronaut headed to Mars. You get there with lightning speed and when you arrive — Olsher informs you like a distaff Vincent Price — “you are greeted by a hungry welcoming committee.”

And then you’re eaten alive to the sound of munching and swallowing! At which point the martian — likely Olsher’s sped-up voice — remarks, “That was delicious. I wonder what it was,” before heading off in its flying saucer.

This was the track that brought the house down at 12 Middlebrook Drive. Sometimes we’d bypass the whole record just to get to that cut.

Of course, as I sit here writing this, I’ve been playing certain snippets on the computer. A few minutes ago, my son Sam walked by and said, “Ah. It’s that time of year again.”