REVIEW: Detective Comics #940 is the BATBOOK OF THE WEEK…

I have nothing against Tim Drake per se. I’ve always liked him, especially before the resurrection of Jason Todd and during his appearances on The New Batman Adventures.

It’s just that the emergence of Damian Wayne as Robin and the New 52 made him redundant. So I’ve argued that he should be taken off the field. (Click here for more on that — if you dare.)

But I’m not crazy about how he’s been taken off the field in Detective Comics #940: 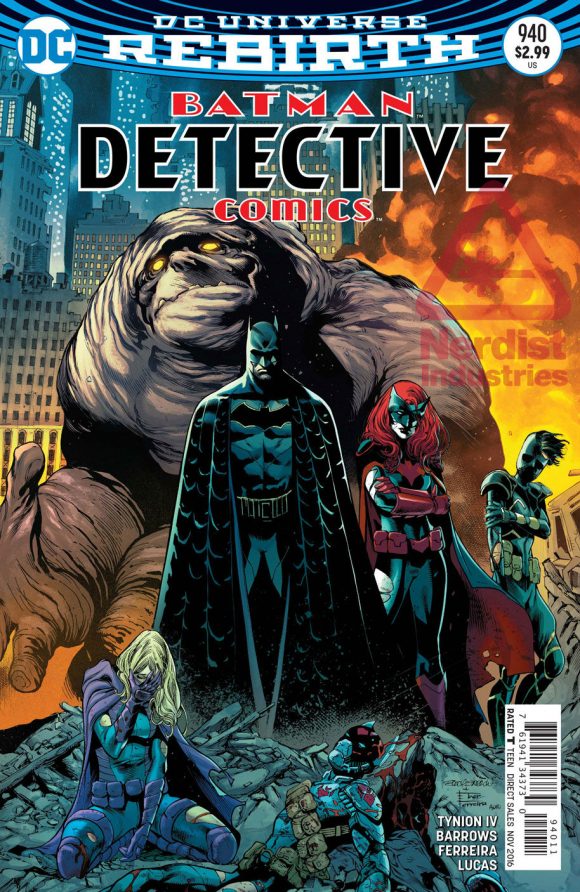 Jacob Kane’s drones appear to blow Tim apart and Batman cradles his bo staff like he did Jason’s body in A Death in the Family. Everyone mourns — even over in Teen Titans #24, the final issue of that title’s pre-Rebirth run.

He’s not dead, however. (And he’s not the new Oracle, as some predicted.)

No, instead he was transported at the last second — kidnapped by the mysterious Mr. Oz, whom we’ve been seeing mostly in Action Comics and who may or may not be Ozymandias. (Is there a replacement “corpse” that everyone is mourning over?)

Fine. OK. Pieces are being put into place for this massive, Earths-shaking, DCU/Watchmen enterprise that’s expected down the line. And I’m actually cool with that idea.

But I was expecting better on the Tim Drake front. I was expecting that DC was going to recognize that there are too many sidekicks running around Gotham and finally clear the slate some.

Sure, Tim could end up changed or dead or whatever down the line. But for the time being, we’re going to be treated to a lot of ultimately meaningless mourning among the heroic denizens of Gotham — a tiresome cliche that’s become all too prevalent over the last 8-10 years or so.

— Batgirl and the Birds of Prey #2, Batman ’66 Meets Steed and Mrs. Peel #3 and Dark Knight III #1: The Director’s Cut should also be on your shopping list.