The DENNY O’NEIL INTERVIEWS: Watching ARROW and THE DARK KNIGHT

The legendary writer talks about what it’s like seeing your characters on screen — big and small. 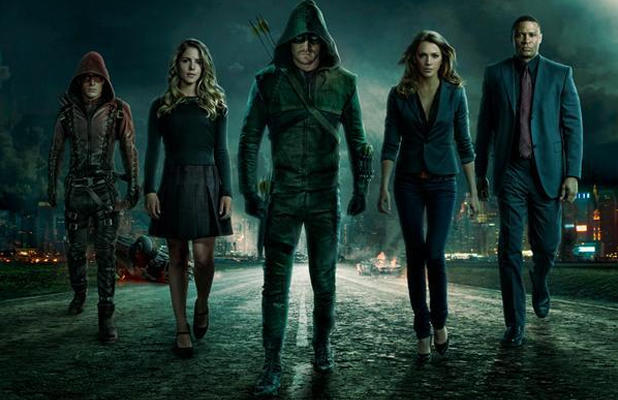 You don’t get a hit show like Arrow without Denny O’Neil and Neal Adams paving the way.

Before the pair revamped the character in the early ’70s, Oliver Queen was a bore. Lousy costume, no personality. His sidekick Speedy was more interesting when he showed up in the Teen Titans. 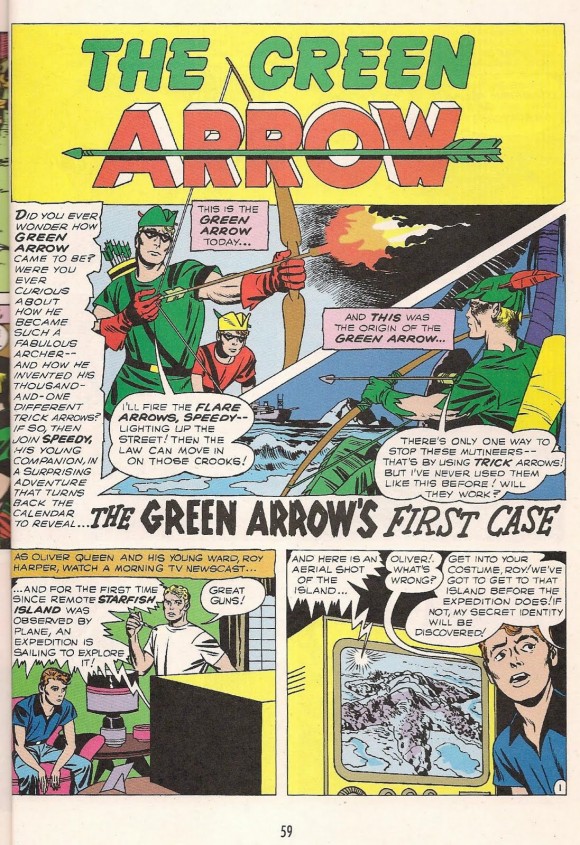 But then came the so-called “socially relevant” Adams-O’Neil Green Lantern/Green Arrow comics that dealt with drug abuse, overpopulation, the environment and corruption and like a boxing-glove arrow to the face, Ollie became hip and cool. 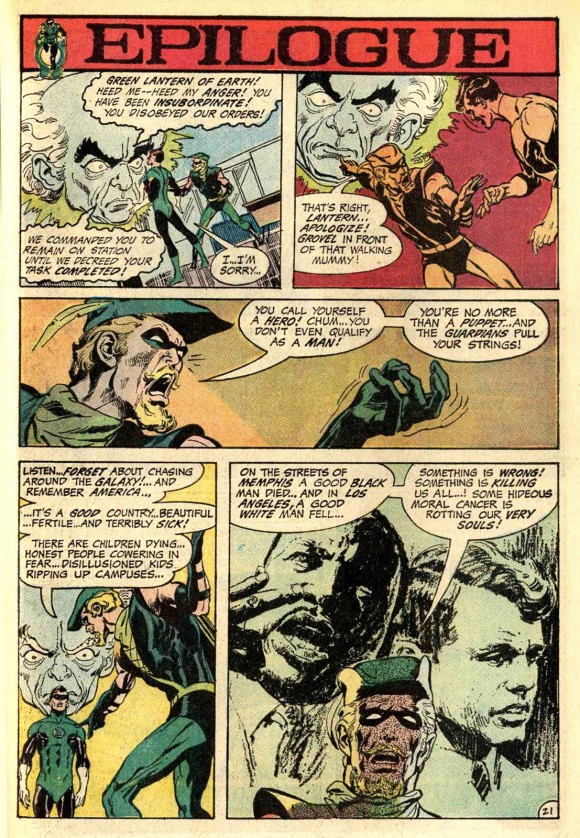 Green Lantern, you have failed this country …

Four decades later and Arrow  — which has its Season 3 premiere on 10/8, at 8 ET/ 7 CT — is not only one of comicdom’s best TV shows, it’s made a star of Stephen Amell and is one of the CW network’s top shows. Its success also led to The Flash, which premieres 10/7, as well as Fox‘s Gotham.

So when I interviewed Denny O’Neil recently for what became this series of interviews, I asked about what it’s like to see characters he created or popularized on the screen, whether it be Arrow or Christopher Nolan’s Dark Knight Trilogy (or even Iron Man‘s Obadiah Stane).

Don’t forget, it was O’Neil who co-created Ra’s al Ghul and the League of Assassins, both of which loom large in the Batfilms and on Arrow.

I showed Denny this cover of Detective Comics #405, which introduced the League, and things took off from there. 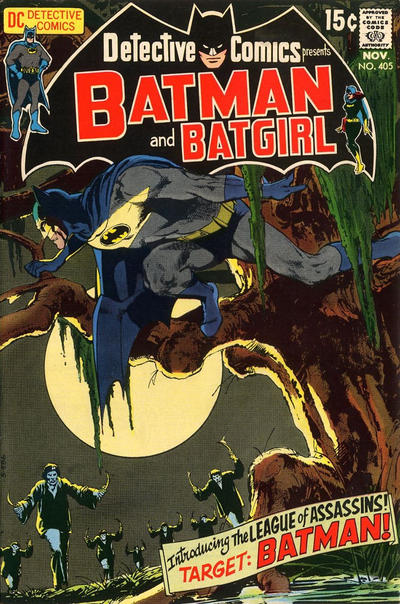 Denny O’Neil: I had totally forgotten about them until I talked with DC’s new lawyer a couple of years ago. I guess I’m credited with creating the League of Assassins. I don’t know if I did.

Dan Greenfield: They’re all over the place now. They’re in the ‘Arrow’ TV show.

(Laughs) Yeah! That’s REALLY a trip for me to watch that!

I watch the show and … I always get a kick when they say, “It’s at the corner of O’Neil and Adams” and that sort of thing. You watch the show?

Yeah. Now, for some reason my cable company did not carry the first three episodes so I missed the beginning. … What I actually mentioned to one of the show’s writers at a convention was the drinking.

Here’s where my First Amendment convictions clash with my life experience. In one episode, he — Ollie and Diggle — were tossing back Vodka shots. Almost every cop show ends with that. The “gang,” in some bar, knocking back.

OK, that’s the way cops are. I have reason to believe that people are — alcoholics are — influenced by the media. In the beginning you wanna be smart, you wanna be sophisticated. Maybe you’re painfully shy and you cannot utter two words to a girl until a third drink. And they have Ollie owning a bar. 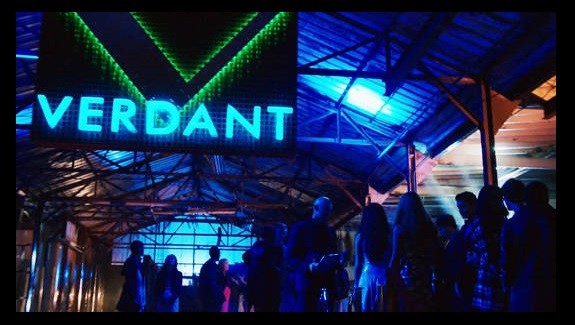 I have a little problem with that because … why would he WANT to? Is that consistent with … I understand they’re not doing MY Green Arrow, and they shouldn’t! They’re a different medium and it’s (40) years later. They wouldn’t be doing their job if they did a carbon copy.

But within what they established, I question that on moral grounds. Ew, I hate that word. That and “spiritual.” “Anything I don’t like is immoral!” (Dan laughs)

But is it a good idea to have a role model hitting the booze? Would he do that as an athlete if you’re looking for some kind of consistency with real life? Bruce Wayne would not! The other thing about Bruce is he has to work out 4 times a week! (Dan laughs) For 3 hours!

They made a point of showing that in the second Batman movie where he’s at his own party and he goes outside and he tosses his drink over the edge of the building.

They make a very distinct point about that, that he’s not actually going to drink! So…having said all that, I do watch it every week and I genuinely enjoy it. I used to watch Veronica Mars and I described it as my “guilty pleasure” and then I looked at the movie and thought, “Why and I calling this a guilty pleasure? This is really a pretty good character and a pretty good series.”

And I think on both that and the Marvel S.H.I.E.L.D. thing they’re learning all the lessons that we learned in comics. One is to express conflict through action. There is a lot more action and a lot more believable superhero stuff. In one recent show, Green Arrow gets off three arrows in about a second! (Dan laughs) That’s exactly right for that character! 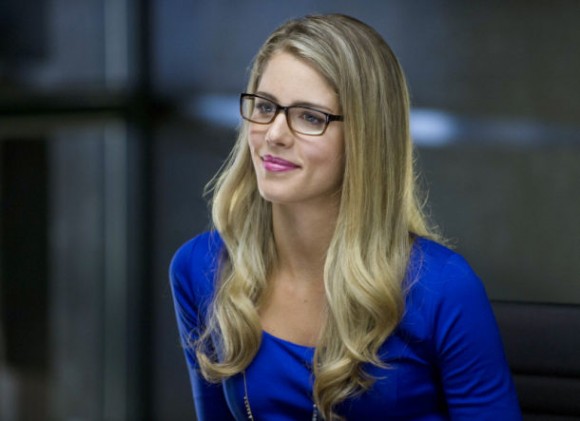 O’Neil: I very much like Felicity. Maybe because she’s hot. (Dan laughs) I may be 75 but I ain’t dead. I didn’t like Black Canary at first and … and I really like her now.

Greenfield: Yeah, me, too. I did not like her in the beginning but I’ve warmed up to her.

It’s like with Talia in the movies. When I went to see the latest movie and boy, God, did they make a big honkin’ deal of it! You know, usually you get invited to a screening. You sneak in the side door. But I had tried not to learn anything about that movie. It’s hard for me to walk into something like that without bringing a lot of baggage or without my professional head kicking in and saying, “What are they doing with this plot thread?”

I knew, however, that Talia was going to be in it and throughout, I thought it was gonna turn out that Cat — Anne Hathaway — is Talia. I didn’t see Marion Cotillard coming and when I tried to figure that out later, I realized, in my mind, Talia is tall! The ideal actress to play her would be … Angie Harmon. A tall, classy, beautiful, stately woman who projects toughness.

Marion Cotillard did a fine job but that’s a piece of baggage that I was bringing in that I wasn’t aware that I was carrying. 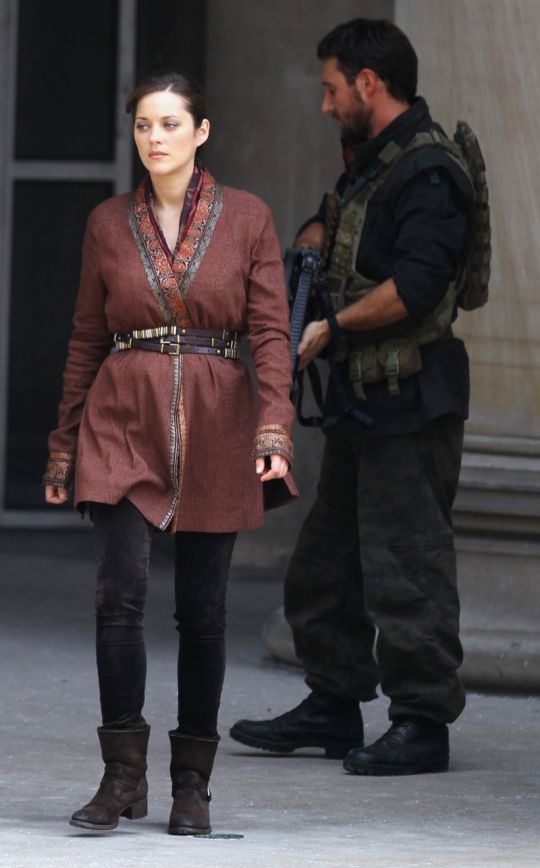 Not what Denny had in mind.

I used to joke that I fell in love with Black Canary, which is a pretty sick thing to do. But I did have some kind of image of, like, the greatest model in the world who was also tough as nails. But sweet! And nurturing.

That character’s not exactly that but they made her a martial artist, they’ve addressed some of the problems with the costumes. I think she’s a perfectly fine character on her own, in her own right. 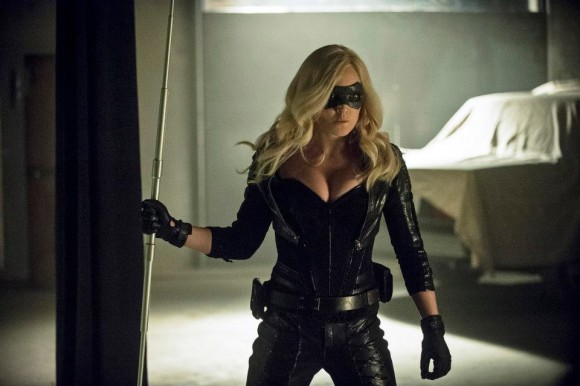