SUPERMAN Gets His Red Trunks Back in ACTION COMICS #1000

It’s funny, the things we comics fans get excited about.

Best part, though? Superman’s getting his red trunks back, as this Lee cover image shows: 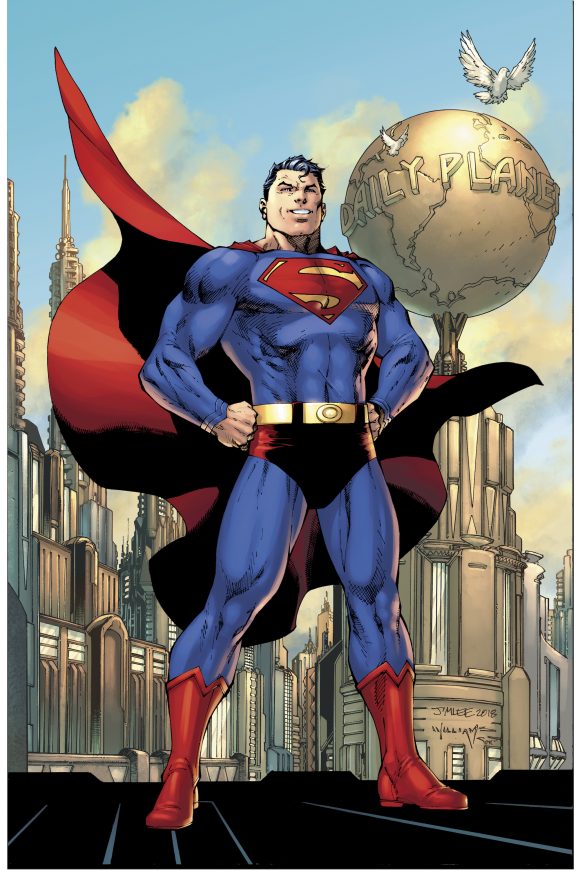 And apparently they’re gonna stick around, too.

The trunks vanished with the New 52 in 2011 and haven’t returned until now, except for flashbacks and non-canonical tales.

Now, I’m hoping for a Tom King Batman story where Bruce gets jealous and goes and puts his old trunks on.

DC is going all-out to celebrate the one-thousandth issue of ACTION COMICS—the longest continually published comic book of its kind in history, the series that introduced Superman to the world and the title that launched the superhero genre. The Jim Lee-drawn cover features a new costume that integrates a variety of classic and new elements, including the Man of Steel’s trademark red trunks.

“ACTION COMICS #1000 represents a watershed moment in the history of not just comic books, but entertainment, literature and pop culture,” said Lee. “There’s no better way to celebrate Superman’s enduring popularity than to give him a look that combines some new accents with the most iconic feature of his classic design.”

“The one-thousandth issue of ACTION COMICS is an incredible milestone in pop culture and a testament to the vision of Jerry Siegel and Joe Shuster,” said DC publisher Dan DiDio. “Without this book, along with Siegel and Shuster’s fertile imaginations and boundless creativity, the superhero’s place in literature may have been wildly different, if not altogether nonexistent.”

This must-have collector’s item comic book will also feature previously unpublished art from Curt Swan, whose dynamic, iconic style many consider the definitive look for the Man of Steel throughout comics’ Golden and Silver Ages. Acclaimed DC writer Marv Wolfman will script a story based on this never-before-seen content. In addition, the comic will include a collection of memorable bonus stories from some of the most celebrated names in comics and entertainment.

Contributors to this once-in-a-lifetime issue include legendary Superman movie director Richard Donner and New York Times best-selling writer Geoff Johns, with art by Olivier Coipel. Other contributing creative teams will include Paul Dini with José Luis García-López; Tom King with Clay Mann and Jordie Bellaire; Brad Meltzer with John Cassaday and Laura Martin; Louise Simonson with Jerry Ordway; Scott Snyder with Tim Sale and more to be announced. This celebratory comic book is just the beginning; this milestone will be recognized across the DC superhero line for the month of April with a series of Superman-themed variant covers and even more to come. Check out the website at www.dccomics.com or the DC YouTube channel for the latest news regarding Krypton’s last son and his elevation to pop culture icon.