SPIDEY’S SCREWIEST SPIDER-VERSES #5: You and What Army, Spider-Man?

The Spider-Event to end all Spider-Events is in full swing: Spider-Verse. So it only behooved us to take a look at the oddest and strangest Spider-Verses ever! Now, the finale … with JOE KUBERT!

Check out these earlier journeys:

SPIDER-MAN and the ASPIRING ENGINEERS! 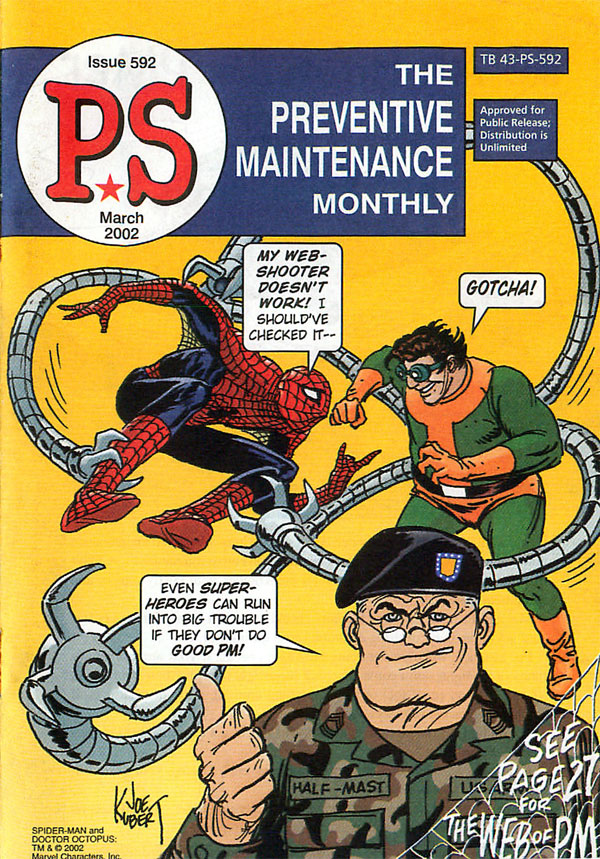 We should all probably be glad that Spider-Man has never joined the United States Army, because if there’s a G.I. Joe who would be more morose than Sad Sack, it’s the universe’s perpetual whipping boy, Peter Parker. (Also, it’s highly unlikely that the enlisted men’s mess serves Aunt May‘s wheatcakes.) Judging by this installment of SPIDER-MAN’S SCREWIEST SPIDER-VERSES, it’s probably just as well Spidey remained a non-military civilian, because here’s a universe where our web-slinger proves himself completely unsuitable for this man’s (and woman’s) Army.

Luckily, he teams up with Master Sergeant Half-Mast McCanick, drawn by the legendary Joe Kubert, who sets him on the right path! It’s not in any Spider-Man comic published by Marvel, but in the pages of PS: The Preventive Maintenance Monthly! 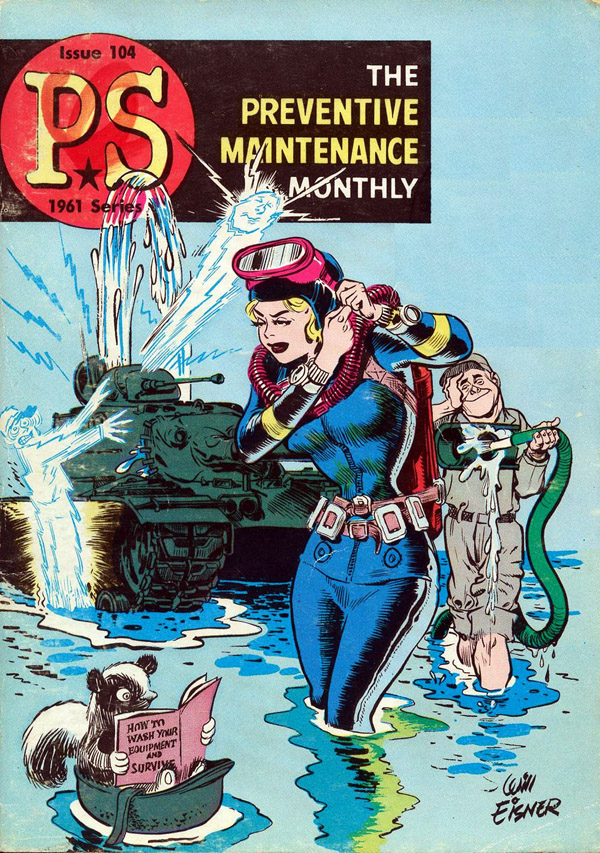 Cover of PS, The Preventative Maintenance Monthly #104 (1961), art by Will Eisner

Wait, who? What? Where? Web? Let’s start at the beginning with PS, a magazine seldom seen by civilians. Begun in 1951 and still published today (issue #744 has just been released — take that, Marvel and DC renumbering enthusiasts!), PS supplements the hefty technical manuals required for care and maintenance of military equipment by breaking down frequently asked tech and procedure questions and problems into humorous illustrated step-by-step actions. With its accent on “preventive maintenance” to keep equipment running smoothly, it’s not intended to replace the original manuals (hence its title “PS” — a “postscript”), but it’s served the Army for over 60 years as a popular resource that entertains as well as teaches.

The long success of PS warrants a snappy salute to its original artistic director and chief illustrator from its beginnings through the early 1970s — the virtuoso artist and writer Will Eisner, who had worked previously on a similar WWII publication. With the advent of the Korean War, the Army hired Eisner to be PS’s artistic director. Eisner wasn’t PS’s sole artist over those two decades: Major comics artists who’ve contributed work include Alfredo Alcala, Murphy Anderson, Don Perlin, Mike Ploog, Dan Spiegle and Kubert.

Artwork by Eisner and others would frequently accompany tech drawings and blueprints for amusement and humor purposes. Like the famous comic book series Classics Illustrated, PS took the approach that denser material might be more easily comprehended in a form that was both visual and engaging. 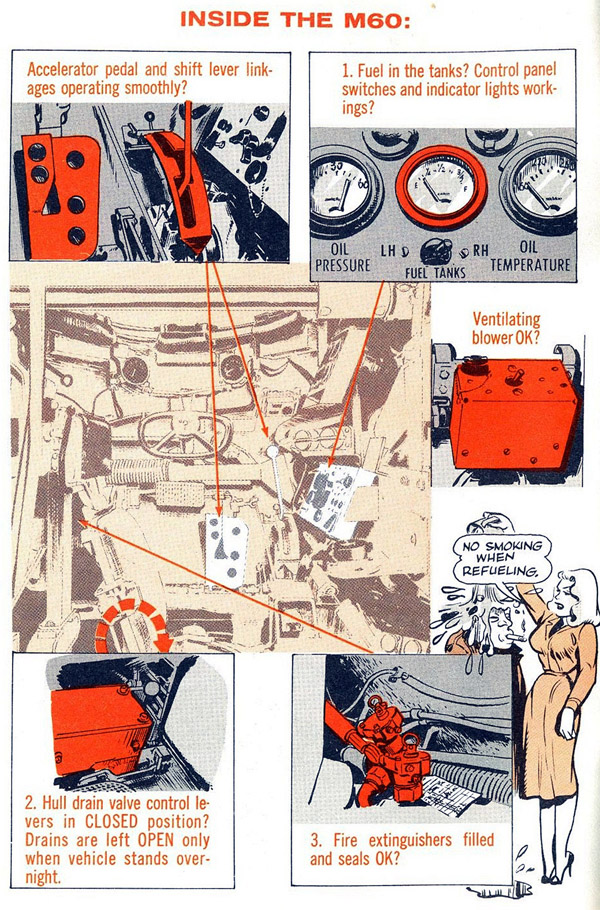 from PS, The Preventative Maintenance Monthly #104 (1961), cartoon art by Will Eisner

Eisner’s G.I. Everyman character, Private Joe Dope, would get across the point using comic book stories, often accompanied by Corporal Connie Rodd. From the pen of Eisner, the corporal was easy on the eyes but defied the usual dumb-blonde jokes — she knew the procedures from back to front and always admonished soldiers to care for their tech in the correct way. 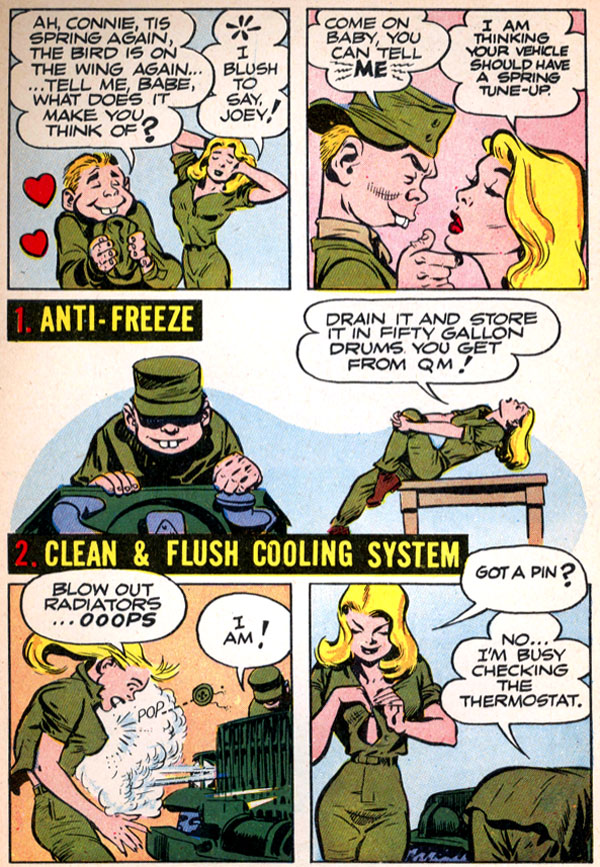 So from the quite technical… 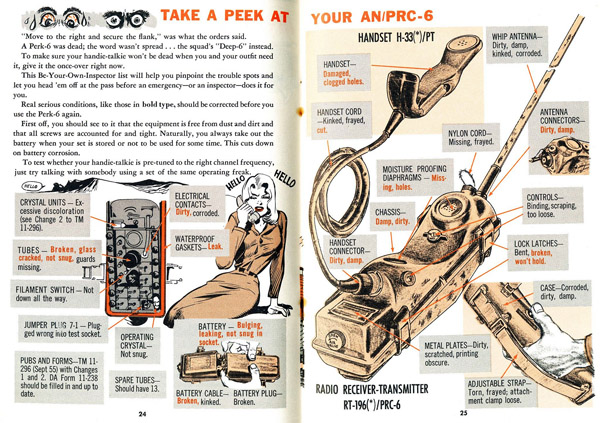 …to the frankly cheesecake… 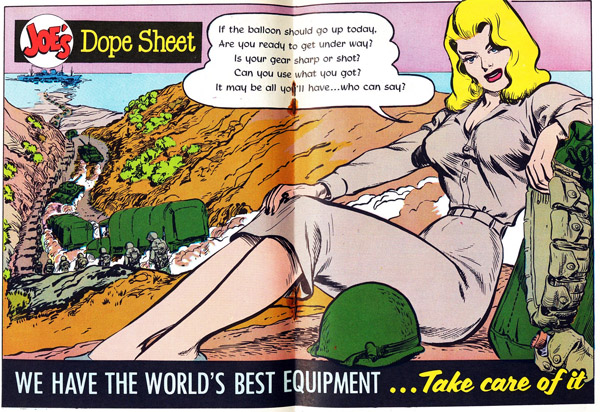 …PS aimed to educate and edify in an entertaining manner.

More modern times, of course, brought a more enlightened view to PS, and sexy Connie was replaced with more politically correct figures. (Although I’ve got to ask…why aren’t these two women in uniform?) 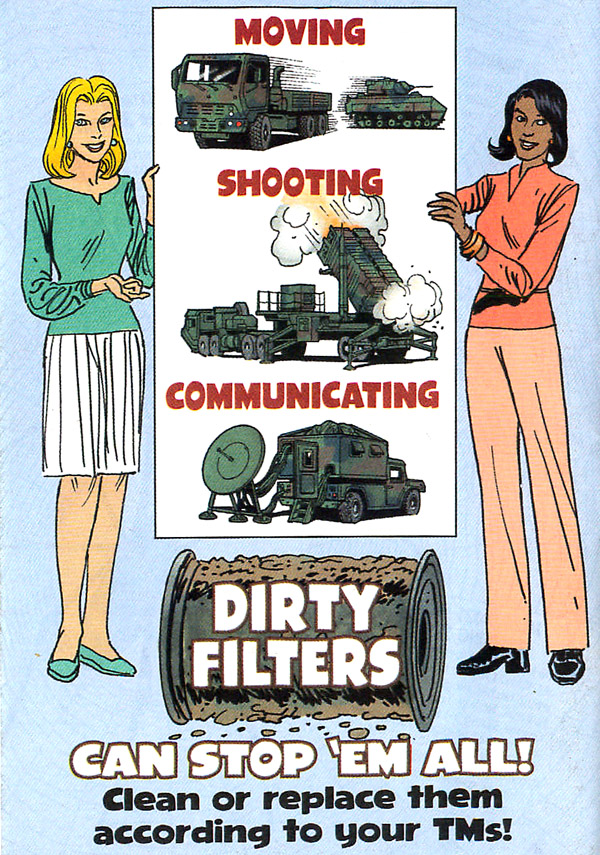 Today, Connie Rodd‘s role as spokesperson for preventative maintenance has mostly been taken by Master Sergeant Half-Mast McCanick, also created by Will Eisner. The magazine’s mascot and spokesman for all things mechanical, Half-Mast is also the host of its letters and questions section as well as an unswerving champion of care and attention in its illustrated and comics sections. His catchphrase “Would you stake your life, right now, on the condition of your equipment?” summarizes the exact mission statement of PS. 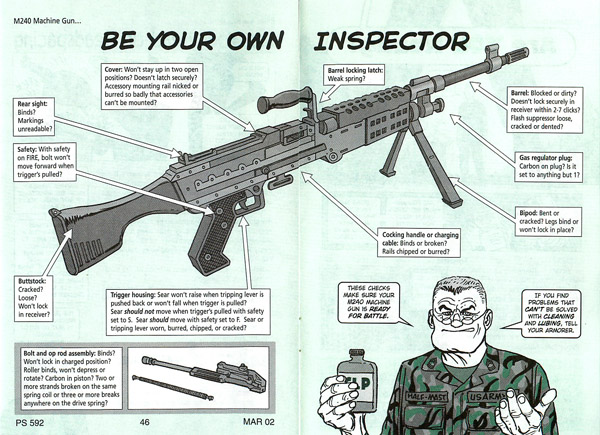 Also — just what you’ve been waiting for — he teamed up with Spider-Man! 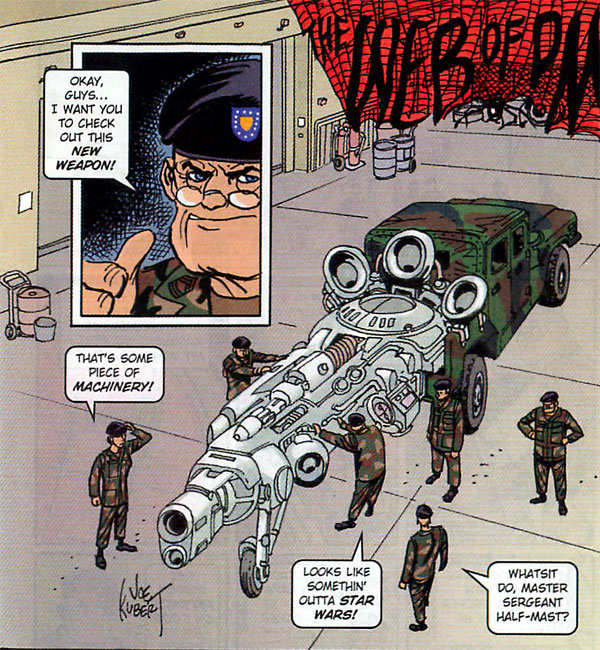 The Web of P.M. in PS #592, by celebrated comics creator Kubert brings a suitably high-tech piece of equipment under the care of Half-Mast and his crew. His specific checklist for keeping it in perfect running order are a point most superhero comics neglect: I bet the Ultimate Nullifier wouldn’t be half as impressive if its handle fell off or just gave off a shower of sparks because of Reed Richards‘ absent-minded maintenance. If you’ve got a big-ass sonic cannon, however, you can expect a super-villain to try to steal it. It’s practically rule three in the superhero handbook, right after “with great power comes great responsibility” and “criminals are a cowardly and superstitious lot.” 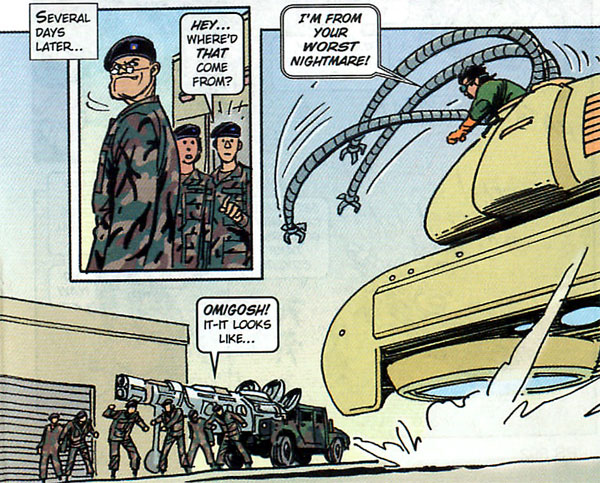 Luckily, Spider-Man has pursued the wicked Dr. Octopus to the Army base, and let’s not even try and speculate on what Spidey would be swinging from in order to get from Manhattan to a military base somewhere outside the city. Skyhooks, I guess. It’s a terrible moment of irony, and yet a situation tremendously familiar to Spider-Man, when his web-shooters malfunction right in the middle of the fight. Also broken: Doc Ock‘s mechanical arms. Serves them both right for buying those cheap, generic AA batteries! Because his unit has kept up their preventative maintenance on the sonic cannon, however, Half-Mast is easily able to subdue Octopus‘ gang of thugs, crooks and extras from the movie Guys and Dolls. Then, in a scene I would pay folding money to see in a monthly Marvel comic book, Spidey and Doc Ock just spend several panels beating the crap out of each other. Isn’t this exactly why you read comics, folks? The comic ends with a page that wouldn’t be out of place at the end of any issue of Marvel Team-Up: a lesson learned, a handshake between allies and Spidey swings off into the distance, although MTU would have had a big banner at the bottom that read “NEXT ISSUE: MOON KNIGHT!” This being a non-canonical Spider-Man adventure from a distant Spider-Verse somewhere out in the Multiversity (Copyright 2014, DC Comics), our friendly neighborhood S.M. never learns his lesson and continues to ignore preventative maintenance on his web-shooters, spider-tracers, spider-signal and camera, allowing them to malfunction at exactly the moment in an adventure where it’s the least convenient.

Ah, if only Half-Mast could migrate to Earth-616. We’d see have such clichéd Marvel Comics scenarios as Iron Man forgetting to plug his armor into the USB charging port, S.H.I.E.L.D. Helicarriers dropping from the sky like seagulls with heart attacks or Doctor Doom‘s codpiece popping off right in the middle of a dramatic speech about destroying Reed Richards.

I bet Half-Mast could even figure out a way to stop that pesky Cosmic Cube from destroying universes inadvertently. He hates when that happens.

Special Read-More-About-It Department: You can find the official PS magazine website online, and look at PDF editions of PS since 1999. Older issues can be viewed online at the Virginia Commonwealth University website. Tell ’em Half-Mast sent you!