Mysterio, Mysterio… Does whatever a Mysterio can… 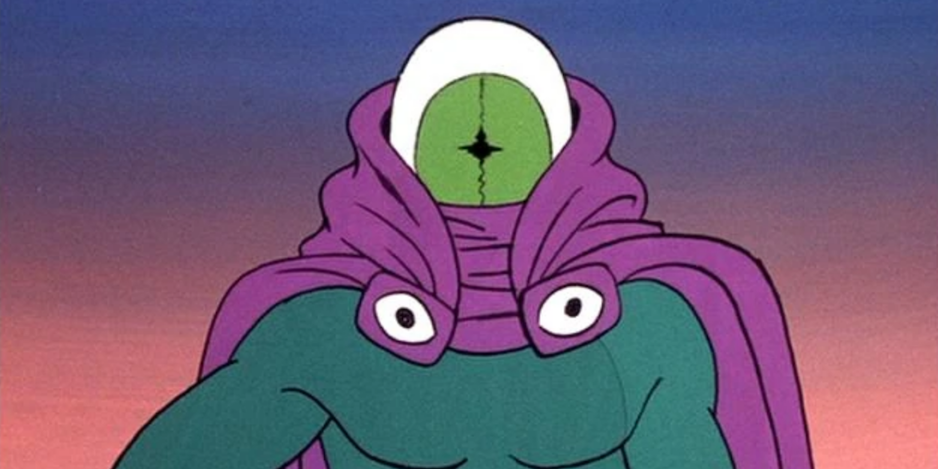 The Green Goblin may be bigger, Doc Ock may be smarter and the Lizard may be more ferocious, but there are few if any Spider-Man villains who are cooler than Mysterio.

It’s really down to the look. I mean, this is Steve Ditko at his wonderfully weirdest, y’know? 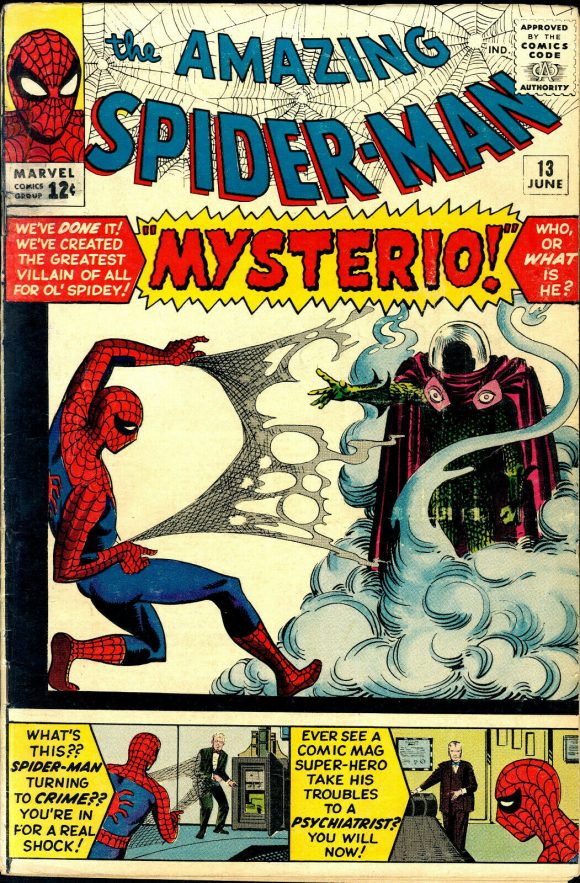 Mysterio has long been a personal favorite: One of the first Spider-Man comics I ever got was Amazing Spider-Man #142, with this gobsmacking cover… 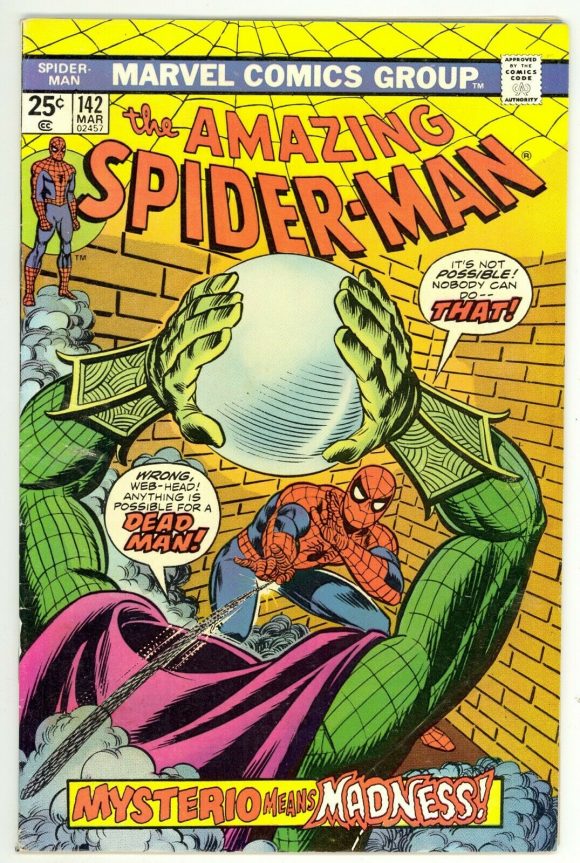 Pencils either by John Romita or Gil Kane. Inks by Romita.

… and he was included in Ideal’s 1973 vinyl and cardboard Spidey playset – one of the all-time great childhood toys: 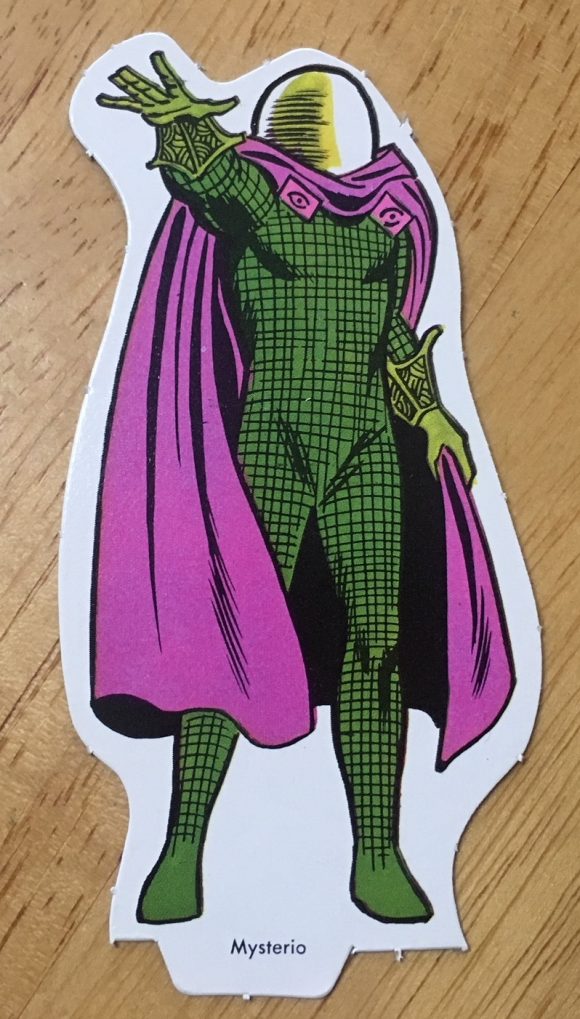 Then there was the 1967-70 cartoon, which, for my money, is still the most entertaining version of our wall-crawling hero to ever hit the screen.

Mysterio made his live-action debut this week in Spider-Man: Far From Home, and it’s kind of strange that we haven’t seen him until now. I mean, if there’s a bad guy whose power set lends itself to blockbuster treatment, it’s special-effects wiz Quentin Beck.

But at least as kids we got to see him in motion – limited though the animation was. (Of course, he showed up in later Spidey cartoons as well.)

Mysterio popped in three times during the show’s run (four, if you count the clip-show episode Trip to Tomorrow that finished out the series) and each installment brings the kitsch you crave.

His first appearance was in the first season’s The Menace of Mysterio, a fairly direct adaptation of ASM #13, by Stan Lee and Ditko and the show’s first full-length installment. 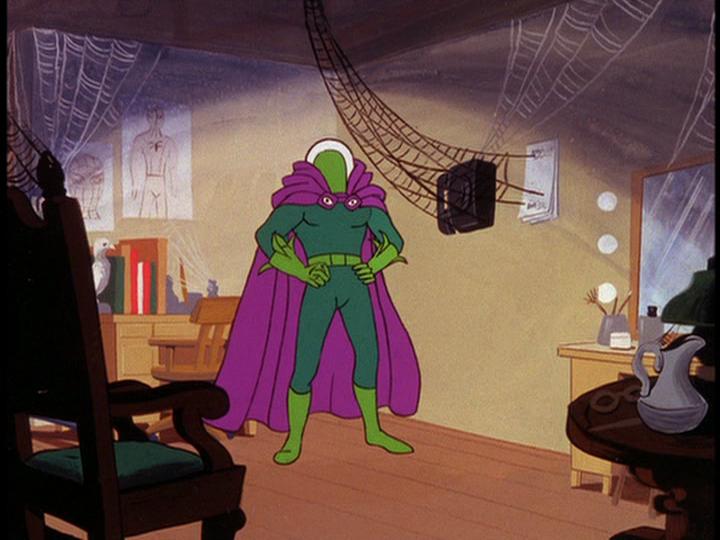 In a nutshell, Mysterio frames Spidey for a robbery then offers his services to J. Jonah Jameson, who naturally wants to be rid of Your Friendly Neighborhood You-Know-Who.

Spider-Man and Mysterio have a great can-you-top-this confrontation atop the Brooklyn Bridge and finally throw down later at a film studio. Spidey wins, Mysterio gets put away and JJJ loses again. (How he escaped criminal charges is beyond me.) 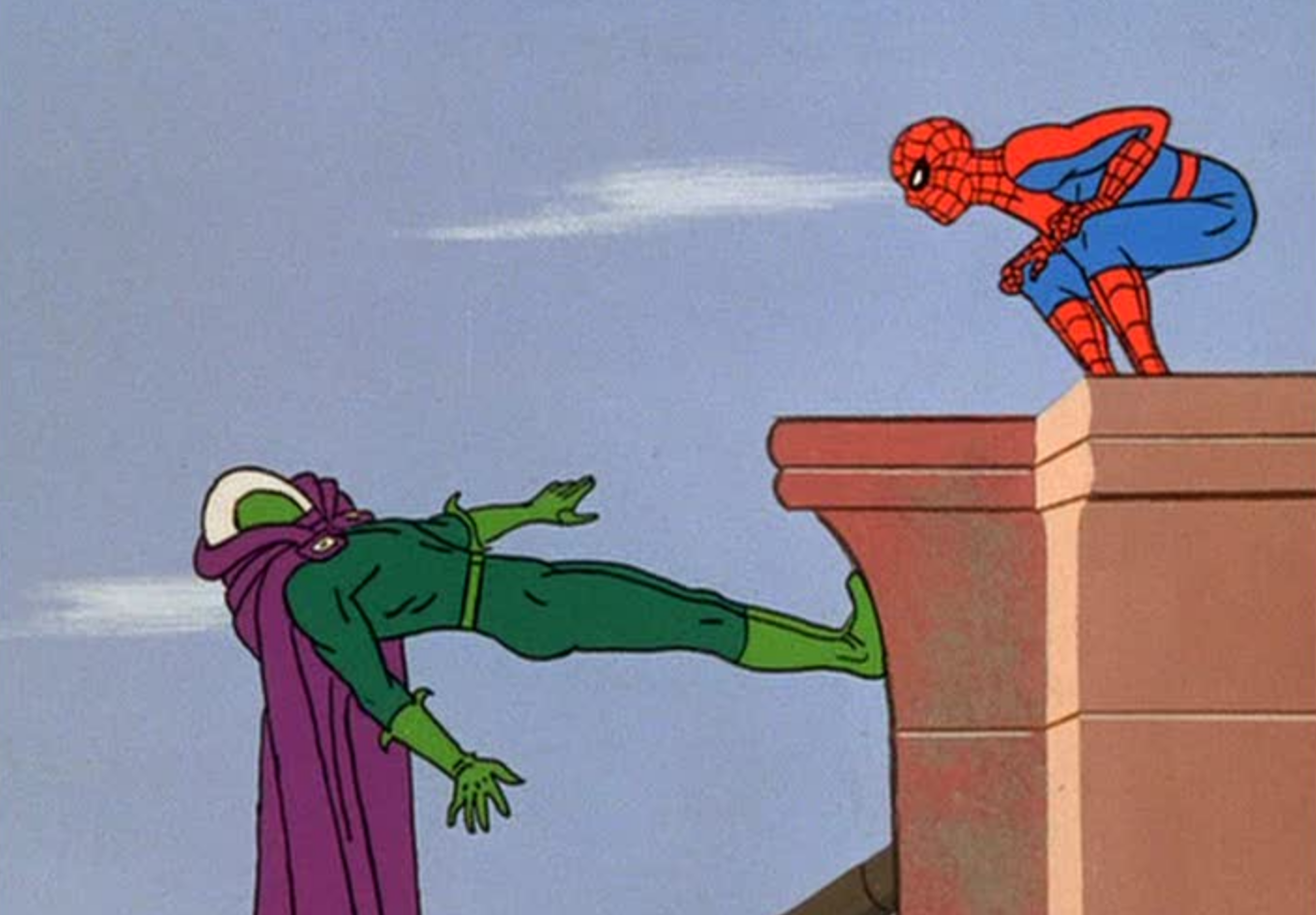 Oddly, there are a couple small but significant changes from the comic: For one thing, Mysterio’s secret identity isn’t Quentin Beck. It’s simply “Joe.”

But what’s really strange is that his face beneath the dome looks an awful lot like Ditko’s Beck — except the animators gave him pointed ears for no apparent reason. Unless they were trying to deliver an unofficial Mr. Spock cameo: 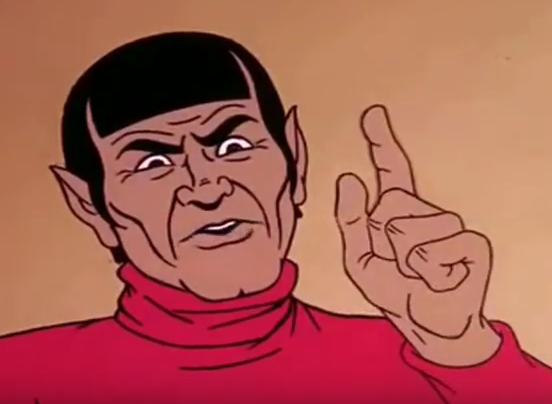 Mysterio came back later in the season in Return of the Flying Dutchman, a somewhat less inspired entry than his first appearance.

Basically, the villain used his illusion skills to hoodwink a small village into believing it was being menaced by the infamous ghost ship – all as a cover for a smuggling operation.

The ep, which is a short, has more atmosphere than pizzazz, and that’s down to the stormy weather that’s prevalent throughout. And there is another neat showdown aboard a rundown sea vessel. But on the whole, this second appearance lags behind Mysterio’s first. 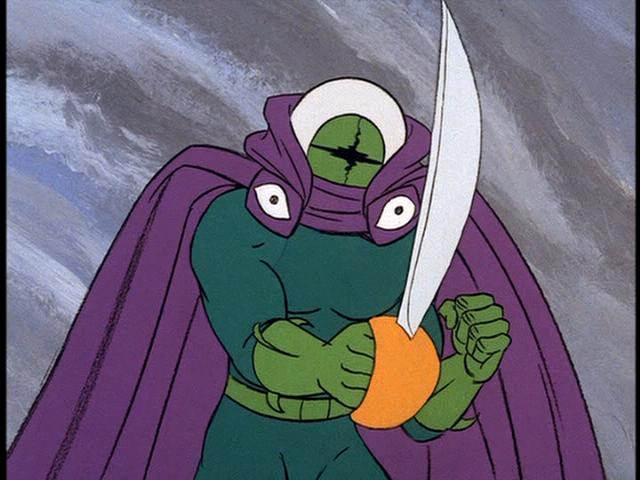 Things got downright bizarre, however, in the villain’s third go-around. The second and third seasons of Spider-Man are generally unhinged anyway and The Madness of Mysterio – one of the final episodes of the series – is no exception.

This one is a loose adaptation of Lee, John Romita and Don Heck’s Amazing Spider-Man #66 and #67 – except for one major, inexplicable change: Mysterio isn’t in his dome-headed costume.

Instead, he looks like a cross between a handsy English professor and Michael Caine in The Ipcress File. With green skin and red hair: 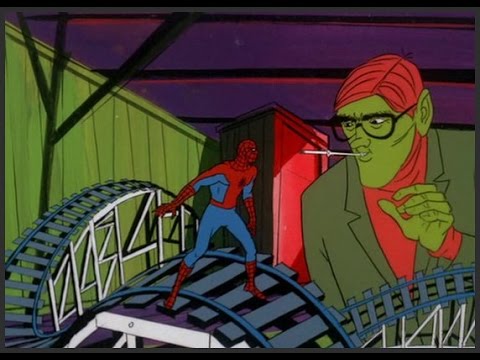 This truly is the madness of Mysterio – because why in the world would you take away one of the all-time great comic-book costume designs? I mean, if there’s a Spidey villain made for Ralph Bakshi’s sensibilities, it’s Mysterio, right?

Hey, whatever. It’s all a wacky kick, anyway.

Anyway, for reasons that I still can’t fathom, the 1960s cartoon is out of print and unavailable anywhere for streaming. At least legitimately so. You can find fairly cruddy copies posted to sites like Dailymotion, for what that’s worth.

My fingers are crossed that when Disney launches its new streaming service, they’ll actually do the obvious thing and get this series online.

In the meantime, you can still find sets on eBay – and check out Mysterio on the big screen.

Both are certainly worth it.