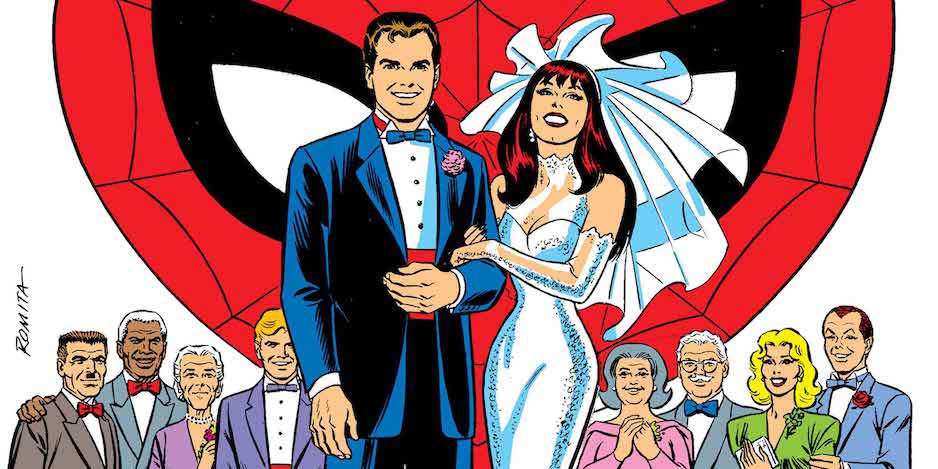 We’ll reveal one here and one Sunday, so let’s get right to it, with the Amazing Spider-Man Annual #21 Facsimile Edition — featuring Peter Parker and Mary Jane Watson’s 1987 nuptials. (UPDATED: Click here for the other one.)

Dig the solicitation info, which will be released by Marvel in the coming days: 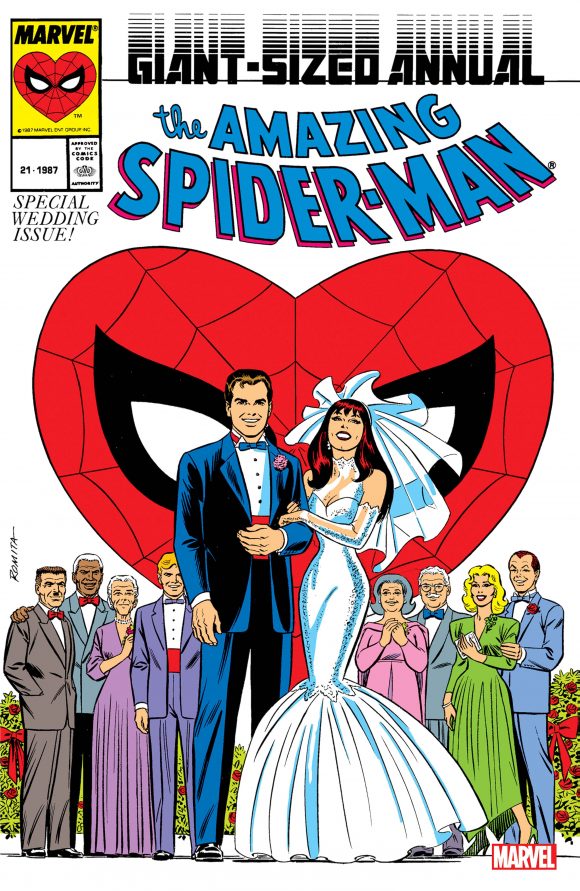 AMAZING SPIDER-MAN ANNUAL #21 FACSIMILE EDITION
Written by JIM SHOOTER & DAVID MICHELINIE
Penciled by PAUL RYAN
Cover by JOHN ROMITA SR.
The comics wedding of the twentieth century! Dearly beloved, we are gathered here to join Peter Parker and Mary Jane Watson in holy matrimony — that is, unless Electro ruins any chance of Spider-Man making it down the aisle! Or unless Peter and MJ’s respective cold feet get in the way! Before the celebrations can begin, the bride and groom have plenty of soul-searching to do — and they’ll need the support of both family and friends to get them both to the church on time…or nearly on time! Will Spider-Man and the amazing Mary Jane say, “I do”? It’s one of the all-time great Marvel comic books, boldly re-presented in its original form, ads and all! Reprinting AMAZING SPIDER-MAN ANNUAL #21.

— Is Peter and Mary Jane’s wedding the biggest in Marvel history? I’d say so, yeah.

— Facsimile Editions very frequently tie in with something else — a new comics series, storyline or big event; an anniversary; a movie, etc. Why is Marvel reprinting not one but two wedding issues in June? Hmmm. We’ll find out soon enough. Or maybe it’s just that the House of Romantic Ideas knows that June is a great time to get hitched.

— Standard Price Comparison: An unslabbed, VF/NM copy of the original (with Peter Parker cover) recently sold on eBay for $29.99. (There was also a cover where Spidey is the groom.) Facsimile Editions go for four or five bucks — ads, extra features and all.

— Again, come back Sunday to find out the other Marvel Facsimile Edition coming in June. (UPDATED: Click here for the other one.)

— MORBIUS’ Debut in AMAZING SPIDER-MAN to Be Re-Released as FACSIMILE EDITION. Click here.