A BIRTHDAY TRIBUTE: An INSIDE LOOK at the precursor to a brilliant Amazing Spider-Man…

Welcome to The Spider’s Web — a recurring feature by novelist and comics exec Alex Segura that looks at Spider-Man’s development since his start in 1962’s Amazing Fantasy #15. (Alex has been re-reading from the beginning.) Each installment covers a specific period in Spidey’s history, with Alex giving you a kind of bouncing ball approach, as opposed to an issue-by-issue breakdown. Click here for the complete index of columns. — Dan

First off, thanks for your patience — these columns are pretty much the definition of a labor of love, and I appreciate you guys swinging along with me.

Last time we chatted, I covered Denny O’Neil’s competent but generally uninspiring run on The Amazing Spider-Man. The big takeaways? Denny wasn’t meant to write Spidey, which is fine — because he made history in so many ways, with so many other characters (Batman, the Question, GL/GA, to name a few!). You can’t win ‘em all. That said, we had Roger Stern and John Romita Jr. next, which is, to many, the highwater mark for Spidey’s flagship title. 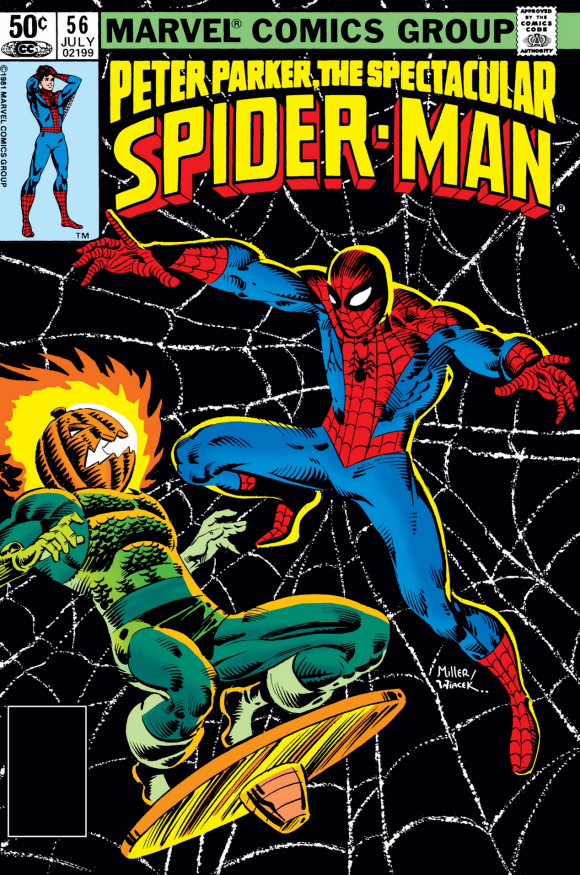 Did you know that Stern had a reasonably lengthy run on Spidey’s sister series, Peter Parker: The Spectacular Spider-Man? I admit, dear reader, I only had a vague recollection of this. As loyal readers of THE SPIDER’S WEB will recall, I bailed on PPSSM midway through the Bill Mantlo run, which followed a fairly haphazard series of creatives changes, culminating in three writers over four months at one point. And lots of Lightmaster, for some reason.

I speculated about this on Twitter recently, but an argument could be made that readers could skip Denny’s run and read Stern’s PPSSM run before shifting back to Amazing. Having just revisited it, I think it holds up: Many of the threads we’ll see Stern and Romita tackle — Will O’ the Wisp, Brand Corporation, Pete’s supporting cast from ESU — come up in their early Amazing issues. So, with that in mind, let’s hit reverse for a few months and dive into the Roger Stern run no one seems to talk about.

Stern’s run starts off awkwardly, with the writer pairing with the legendary Marie Severin in 1980’s Issue #45 to complete a Vulture two-parter started by then-outgoing Amazing Spider-Man scribe, Marv Wolfman. Stern injects some life into the weird story, enough to bring immediate stability to a title that, in my opinion, struggled with a consistent vision for Peter/Spidey.

What is that vision? Well, it feels really simple on reread — Stern wrote PPSSM like the flagship, and with Denny’s run floundering a bit, it felt like the flagship in many ways. You got a sense of Pete’s life as a teaching assistant at ESU, his struggles with romance and money, and what Spidey’s day to day could really be like. 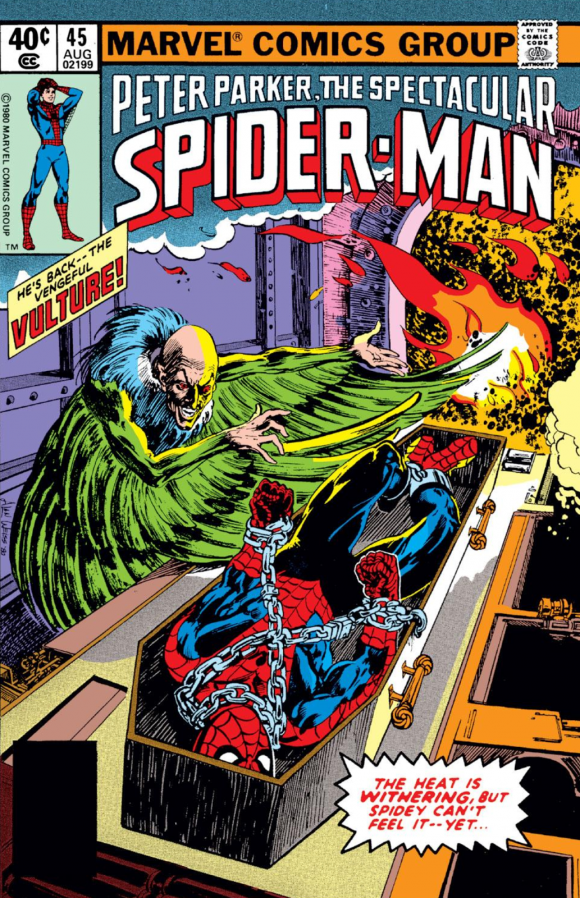 Stern also clearly knows his stuff in terms of Spider-Man history — and, while I don’t want to spoil anything, manages to play with Spidey’s continuity in a fun, thoughtful way, harkening back to Stan Lee and Steve Ditko’s first Tinkerer story and Wolfman’s buildup to Amazing Spider-Man #200. He also injects retreads like the Gibbon with depth, giving life to characters that may be used as fodder by other writers. It’s akin to what more modern writers like Geoff Johns do so well — taking what’s come before and working around it to create something more textured and modern, without negating anything or retconning previous stories.

We also get a glimpse of the magic that’s to come with Issue #50, as JRJR steps in to illustrate the anniversary issue, showing readers what’s in store when Stern finally gets the top gig.

Speaking of the art, I’d wager that a big reason most people forget Stern’s earlier run is because of the inconsistent look. Though veterans like Severin, Jim Mooney, Rick Leonardi, Jim Shooter (!!!) and Luke McDonnell step in to capably execute Stern’s scripts, there’s a lack of consistent visuals, making for a bumpy reading experience. The stories all sing and show hints of the greatness to follow — some even seem like proto versions of the classics Stern will pen with Romita (see the Nitro story in #55 that feels like a dry run for Stern’s later Juggernaut tale). The two big exceptions are JRJR’s #50 and John Byrne’s fun Ringer fill-in with #58. 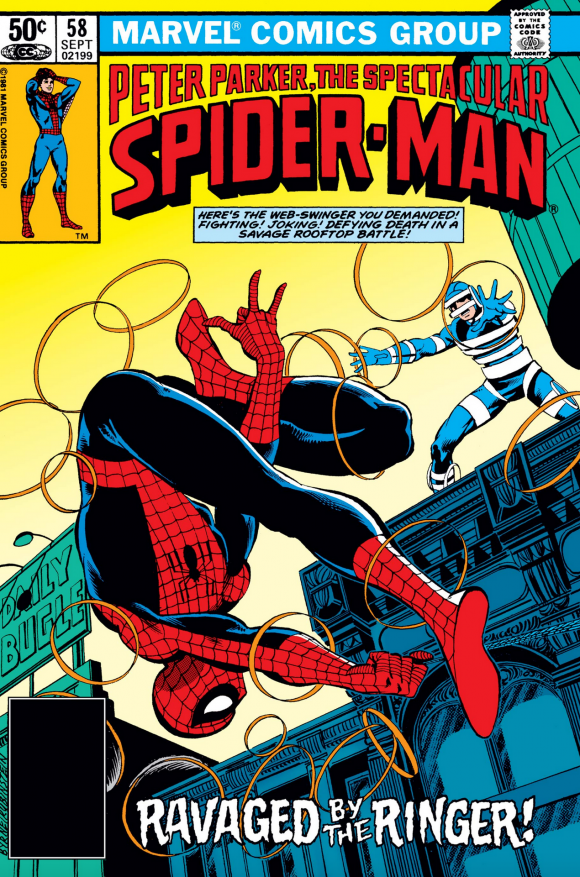 Another hidden gem in the run is Stern’s slow-burn take on Latinx hero the White Tiger, who features heavily in a series of backup stories drawn by Denys Cowan before taking center stage in #52. I won’t spoil anything, but it’s a very atypical team-up tale, one fraught with darkness and an unexpected resolution. It feels like the work of someone really refining their craft.

Stern’s run ends in a fairly perfunctory way — with a Moonstone issue that only features a Stern plot. But by then, he was on his way to Amazing and all signs pointed to good things on the horizon.

So, why does/do the Stern run(s) work? Well, let’s zoom out for a second and think about what makes him such a pillar in the Spidey Hall of Fame. What does he do so well? Here are a few thoughts:

— Humor. His Spider-Man/Peter Parker is not just wisecrack-y, he’s funny. The jokes land, and they feel natural — not like someone pasted a stand-up routine into Spidey’s word balloons. There are some jokes that feel dated, but overall, Stern still gets the chuckles, and that adds to the appeal of both of his runs.

— Stern Gets Peter Parker. A lot of the time, writers try to live vicariously through Peter — granting him happiness and success, whether it’s marrying a supermodel, owning a tech company, or what-have-you. These takes aren’t bad, per se, but they deviate a bit from the Lee/Ditko idea: that Peter Parker will always be down on his luck, struggling and overcome with more problems than solutions. Every time Peter takes a step forward under Stern’s watchful eye, he takes two steps back. The Peter Parker Stern writes feels like a natural continuation of the character Lee and Ditko created. 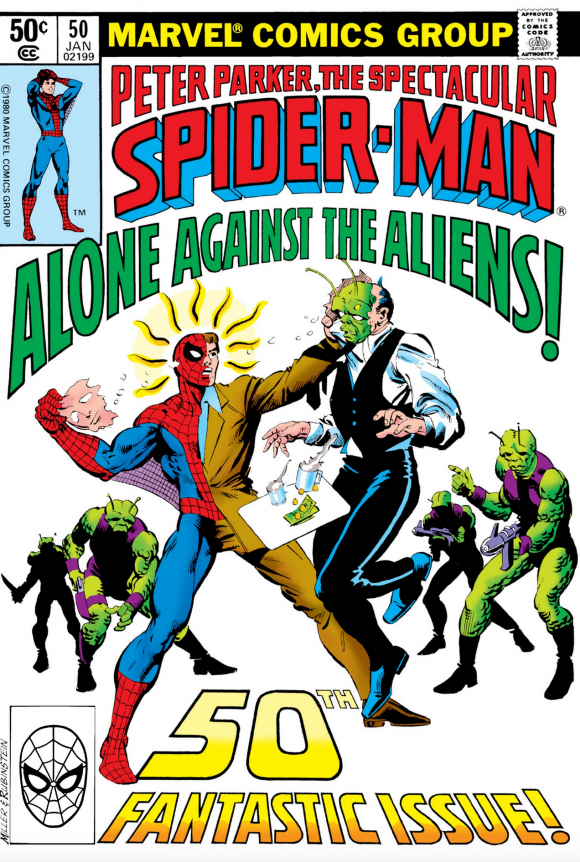 — Shying Away From Typical Rogues. Aside from the Vulture, who Stern seems to love (more on that later), the writer tends to avoid using the tried and true Spidey villains, instead bringing in other baddies from other rogues galleries — even boiling down to a joke or two in the comics. I’m not sure it’s something that could be pulled off today, but the change of pace really lets readers focus on Spider-Man and who he is, and the novelty of a villain without much experience battling Spidey really holds together. The best example, of course, is the classic Juggernaut two-parter, but both Stern runs are rife with cool battles against villains like Cobra, Nitro, Power Man and more. 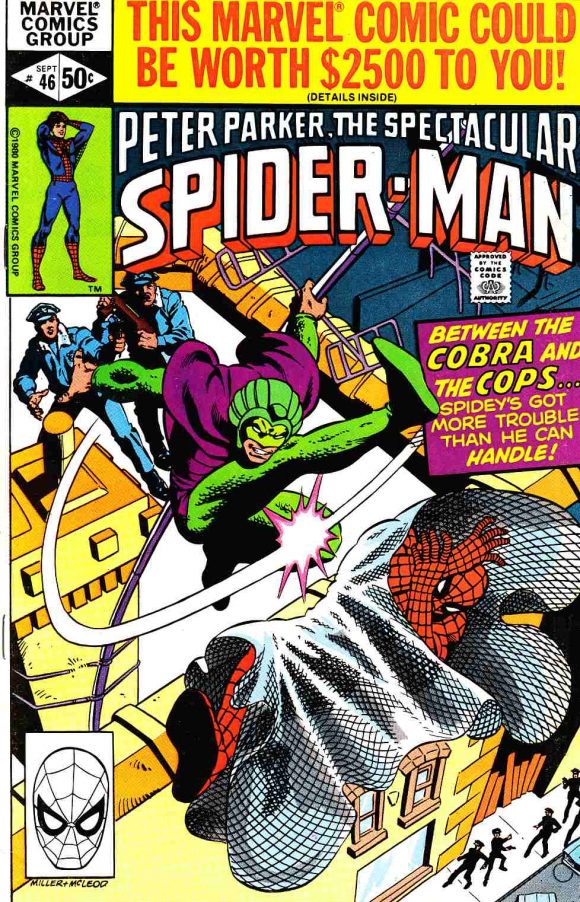 Also, when Stern does dip into the classic villains, with Vulture or the Prowler, he does so with the intent of changing the dynamic,  whether he’s replacing or reinstating a villain to their respective roles. Also, one thing to catch in this run — Stern introduces Roderick Kingsley, whom hardcore fans know was his intended Hobgoblin secret identity (though that wasn’t revealed until years after Stern’s run was awkwardly aborted) and brings Jack O’Lantern into the mix, who would eventually take on the Hobgoblin ID after Ned Leeds’ “death.”

— Momentum. One of my big issues with O’Neil’s run is that each issue felt like a standalone, and when it did build to something, it felt small — like Pete’s country-singer neighbor. Plot threads from Marv Wolfman’s previous, aborted run were not dealt with, so overall it seemed like we were treading water. Not so with Stern, who does a nice job of not only reflecting what was happening in the flagship title while he was on PPSSM, but also picking up pieces and characters (the poor, maligned Deb Whitman, for one) and giving them a little spit and polish.

More importantly, like I noted earlier, we see threads continue in a natural, organic way: Whether it’s Betty Brant and Ned Leeds’ marriage woes, the evolution of Kingsley, Peter’s return to the Daily Bugle, or villains like the mysterious Brand Organization, you get a sense that Stern was ready for this gig and had some ideas to really unfurl. 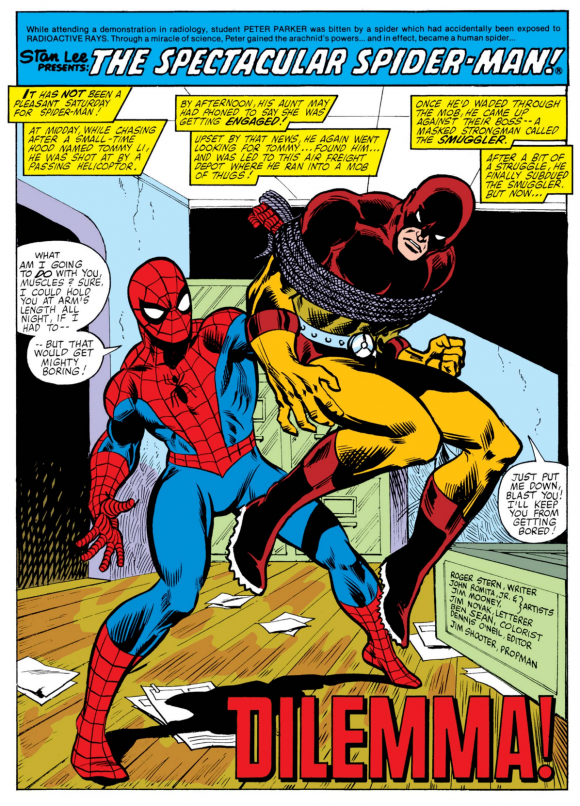 A few quick notes before we go:

— The Amazing Spider-Talk is a fun Spider-Man podcast that has spent time analyzing some of the Bronze Age runs on Spider-Man, and they dedicate an episode to Stern’s PPSSM tenure. Worth a listen! Also, in case you missed it, I co-host The Spectacular Spider-Cast with my good pal Preeti Chhibber. You can listen here or subscribe wherever you enjoy your podcasts! I’ll be giving some updates on my Amazing Spider-Man reread each episode along with our general reviews of more modern stuff.

— The character of Deb Whitman isn’t treated well by most writers of this era — getting routinely dissed and rejected by Pete, and just generally treated as a doormat. It makes for some unpleasant reading. That said, Stern does a capable job of trying to fix that, and — this is just my perception — kindly ushering her off the stage as we get into his Amazing Spider-Man run.

— I’m not sure how soon Stern realized he was getting a shot at the big chair, but we do see him seeding plots that will be resolved once he does, moving him more into a “Peak Spider-Man” situation – with Pete at the Bugle (no longer teaching at ESU), not romantically entangled (see above), and with Aunt May and new beau Nathan Lubensky firmly entrenched in his supporting cast. It’s smoothly done and feels natural — a testament to Stern’s ability.

— NEXT TIME: Things get really good, as we do a deep dive on Stern’s beloved run on Amazing Spider-Man with Jazzy John Romita Jr.! Click here.