Hey Web-Heads! Last time, we took a peek at writer Roger Stern’s oft-overlooked run on Peter Parker: The Spectacular Spider-Man, and showed how that served as basically a dry run for his later work on Amazing Spider-Man, which is, to many fans, a high water mark for the series and the character.

We will not argue that point! The Stern/Romita Jr. Amazing Spidey run of the early ’80s is classic stuff from the start, with only a few speed bumps that, as far as I can tell, were out of the team’s control.

Stern brought a lot of the tricks he honed on PPSSM to Amazing, but his character-driven, back-to-basics approach to Spidey was bolstered by one thing: John Romita Jr. 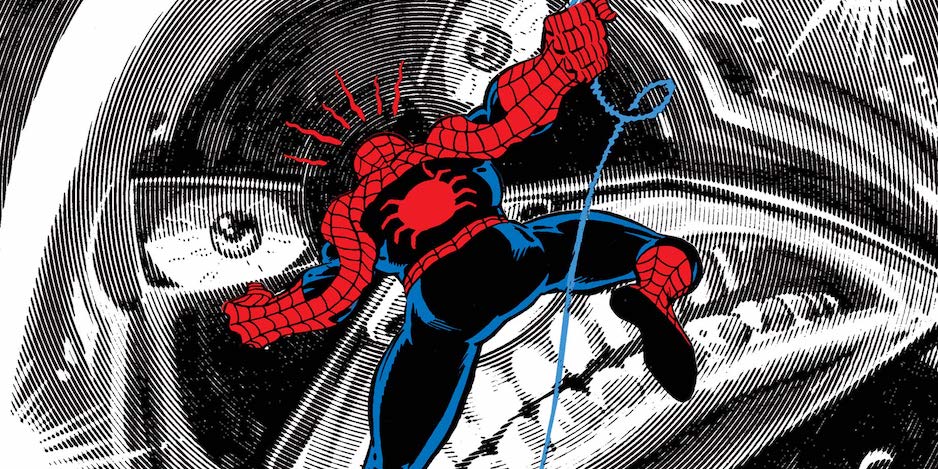 Romita himself has said numerous times in interviews that he took on the ASM assignment with some trepidation, seeing as how his legendary father had basically defined the character during his run. But JRJR quickly found his sea legs, and his consistent (and consistently improving) take, which you could see shift into his more recognizable “look” whenever inker Dan Green or Klaus Janson showed up, really brought a consistency and clarity to Stern’s work that was missing before.

Now, this column wouldn’t be much fun if I just spent eight paragraphs singing the praises of Stern and JRJR — that’s written in stone already, right? I won’t belabor that too much. This run is good, probably as good as Spidey comics get — the perfect blend of Lee/Conway-style adventure with a modern flavor that still feels relevant today. That said, the run has one fatal flaw that was completely out of the team’s control — the ending.

Hear me out, and let me preface this by teasing what’s to follow: The subsequent Tom DeFalco/Ron Frenz run, which came together soon after Stern’s hasty exit from the book, is the epitome of solid-to-good Spidey stuff. Some great new characters, fun twists, enjoyable art. Had they followed anyone else, I think the DeFalco/Frenz run would get much more love than it does today. Had it not followed such a clunky exit, they’d get even more love. But that’s not how sequential comics work, alas, and the shift from Stern’s epic to the next thing feels awkward, even if Stern himself points to why he and JRJR left as your usual editorial shuffles. 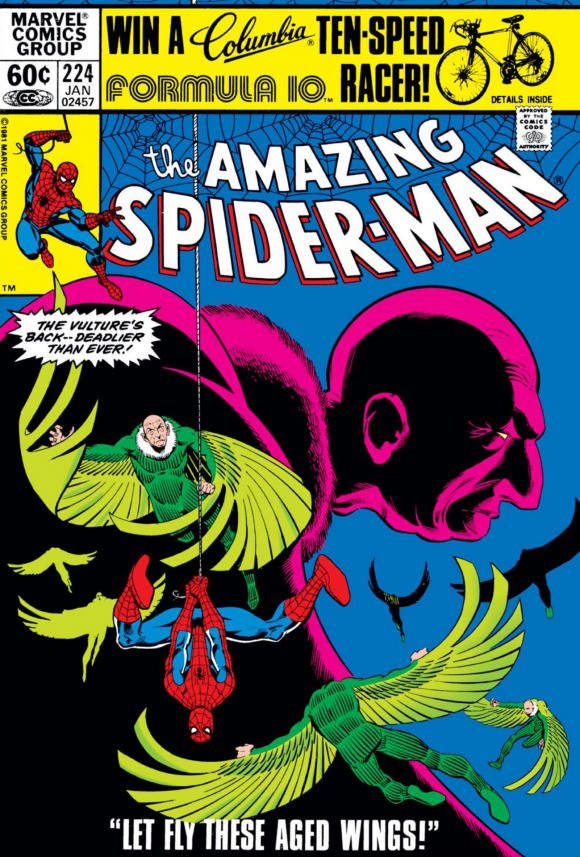 But before we get to how the run ends (next time!), let’s look at it from 1981’s beginning — and see how it naturally falls into a few buckets: “Juggernaut,” “Brand Corporation” and “Hobgoblin.”

Like he did on PPSSM, Stern kicks off his Amazing run with a fun Vulture story (Issue #224), and as I hinted last time, Stern has a strong affinity for the character — one of the very few classic Spidey rogues Stern uses in either of his Spidey stints. The idea of an aging, wily villain facing off against a young, rising star hero is of apparently great interest to Stern, and he spends a lot of time not only pitting the two characters against each other, but also fleshing out Adrian Toomes’ back story and motivations – the kind of love the character wouldn’t get much of for some time after.

Right out of the gate, too, you start to see Stern pull in threads from his PPSSM run to fuel his new digs, with the Foolkiller showing up and being revealed as one of Peter Parker’s students at ESU, and providing an interesting and unexpected foe for Spider-Man. This continues Stern’s trend of diversifying Spidey’s pool of villains while making sure the other elements around Spider-Man are familiar — the Bugle as his workplace, Aunt May, girl and money troubles. It makes for an engaging, entertaining, if-not-great-yet series of issues capped off by a fun two-parter reintroducing the Black Cat to the mix, and forcing Spider-Man to deal with his feelings for the feline-themed thief. 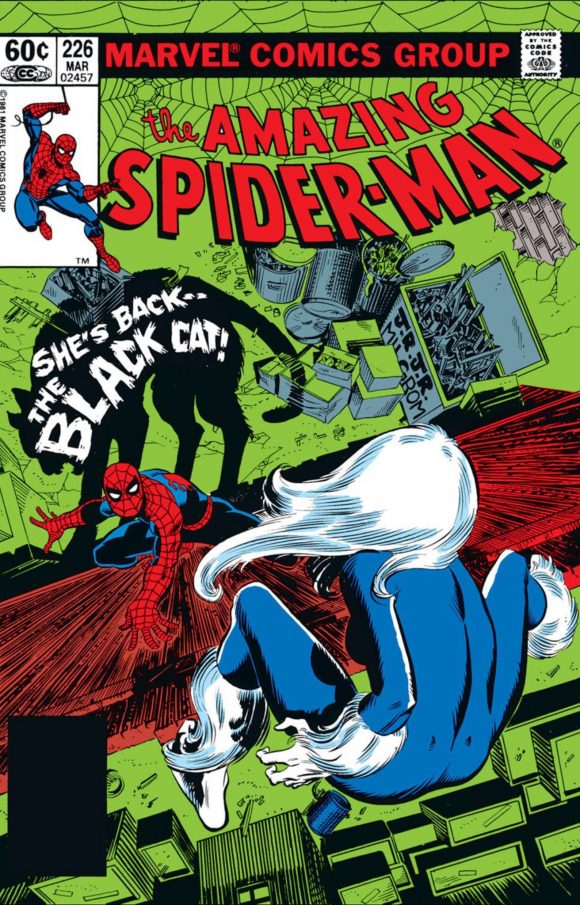 Another thing Stern does well, almost too well, really, is show that his Spider-Man exists in a bigger world where there are other Spidey books and adventures going around. He brings in Police Captain Jean DeWolff, who for much of her character life until this point showed up in Marvel Team-Up. He references his past work on PPSSM and he nods to the stories being told in the sister title well into his own run — particularly the gang war between Doc Ock and the Owl that leads to the Black Cat being seriously injured.

On the surface it’s classy; from a pure craft standpoint, it adds to that early Marvel feeling — that not only are these characters part of the real world, they’re also doing stuff outside of the comic you hold in your hands. It’s pretty neat, and clearly something that Stern does well, weaving the nods in between his own narrative.

After a fairly forgettable fill-in, we get to the meat of the first half of the Stern/JRJR run — and two issues (1982’s #229 and #230) that routinely make any fan’s Top 13 Spider-Man stories list: “Nothing Can Stop the Juggernaut!” 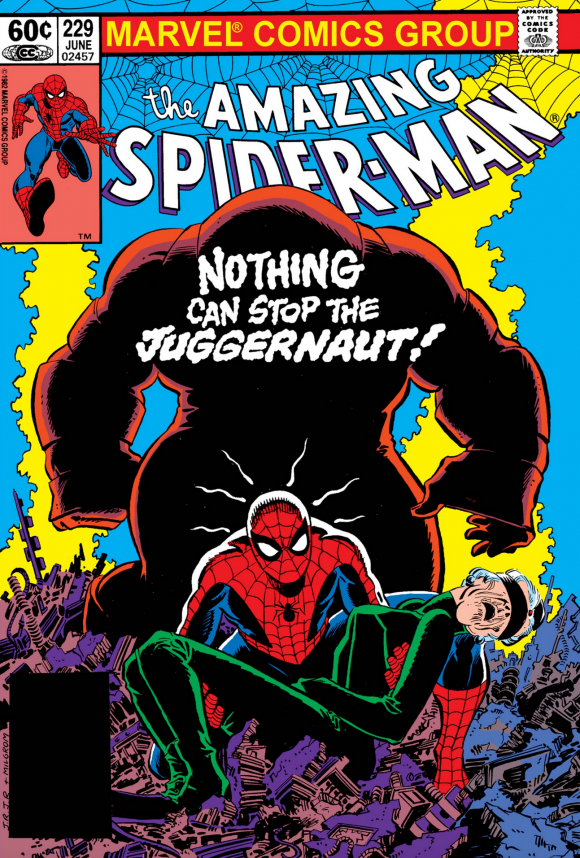 If you see the first handful of issues by the team as a warm-up, these two issues are where they reach their apex, and that carries through the rest of their run with only a few hiccups. In short, the Juggernaut story is a classic Spidey tale — pitting Peter against a seemingly unbeatable foe, against impossible odds, with little hope of victory. It’s a modern Master Planner story, pushing Spider-Man to the brink and beyond.

Using the Juggernaut, mainly an X-Men villain, was a genius play by Stern — reaching even further than usual to go outside of Spidey’s traditional box of baddies. Dusting off Madame Web, Denny O’Neil’s only (arguable) lasting addition to the mythos, and using her as the catalyst for the Spidey/Juggernaut battle is also savvy — another testament to Stern pulling from not only the character’s origins, but his recent past, to augment his own stories.

But as we saw last installment when we discussed Stern’s Nitro issue of PPSSM, it’s the art that pushes this over the top: JRJR goes from pretty good to jaw-droopingly good in what seems to be a few pages, pulling out all the stops to present a hero on the brink, and really helping boil down Stern’s story — which I’d argue is the best modern Spider-Man tale, period. It just has everything you want in one. 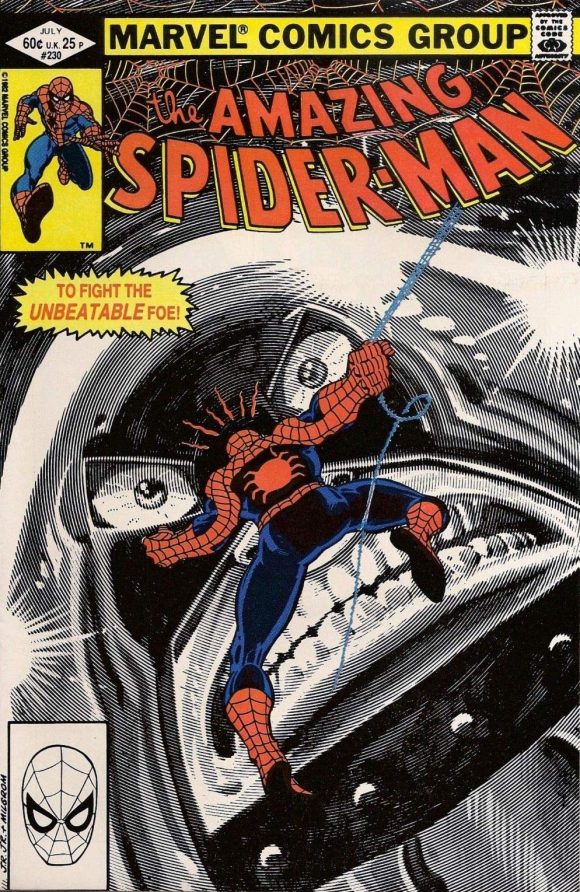 — The early part of Stern’s run ran concurrently with one of writer Bill Mantlo’s best Spidey stories, the aforementioned gang war tale — with art by vets Al Milgrom and Jim Mooney. There’s a nice recap of the arc (which has not been collected) by Brian Cronin. 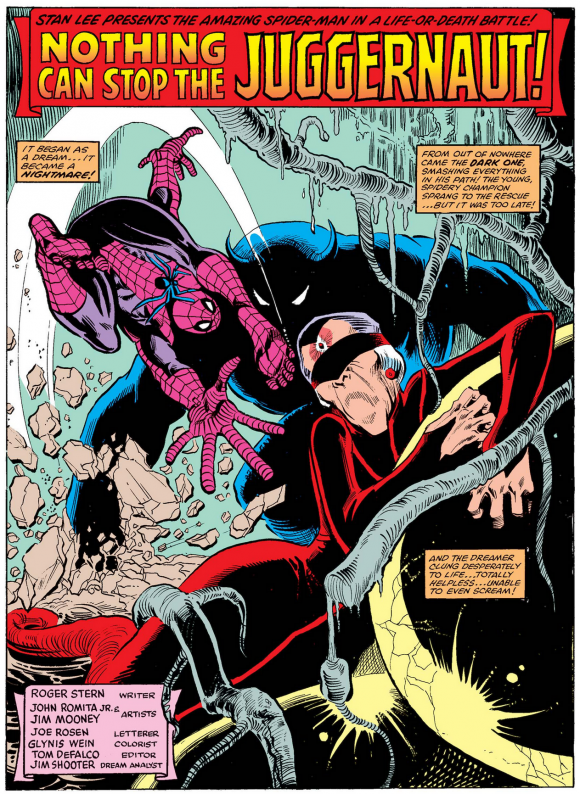 — The bulk of JRJR’s early issues are inked by Spider-vet Jim Mooney, who’s a capable penciler, too. But you’ll notice once the inking duties change, JRJR’s art starts to resemble what we’ll become more familiar with — especially in that era, when he was working with Green on Uncanny X-Men. This isn’t a slag on Mooney, who was a great finisher — but the finisher tends to do more than ink over pencils: they add more of their own style. It’s more evident when JRJR’s legendary pops steps in for a few issues to work over his son’s lines — bringing back a nostalgic visual tone to the series that feels very welcome.

— NEXT TIME: We’ll close out our look at the Stern/JRJR run and tease what’s to come!