SAM HAMM Explains Why ROBIN Was Cut From BATMAN ’89

BATMAN ’89 ANNIVERSARY: The screenwriter reveals the fate of the Boy Wonder…

If you want to check out a really terrific new resource on Batman ’89, pick up Back Issue #113, out now from TwoMorrows.

A few weeks back, in fact, we ran an excerpt from Michael Kronenberg’s interview with Sam Hamm in which the Batman co-screenwriter cited the comics he says inspired his script.

So now, for BATMAN ’89 WEEK, we’re back with another slice – a look at why Robin didn’t make the final cut.

Again, this is just a tiny bit of what’s in the entire issue, so by all means pick it up at your local comics shop or directly through TwoMorrows. (Click here.) 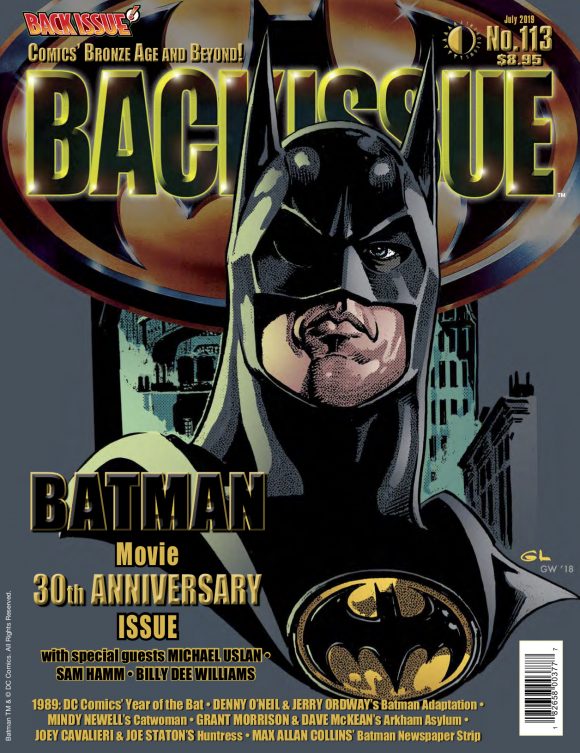 Michael Kronenberg: The biggest differences between your script and the finished film: Jack Napier is not the Waynes’ killer, Alfred does not betray Batman’s secret identity, there’s a much higher body count in your script, Alexander Knox dies, and Dick Grayson is introduced and becomes a key part of the story. Too bad the final film did not follow your script when it came to Batman’s origin and Vicki Vale discovering Batman’s identity. What did you think of these changes?

Sam Hamm: One of my mentors in the film business warned me not to argue with success, and so I guess it’s bad form to agree with you, but I do: The script was reworked by Diverse Hands, and it shows. In the finished film there are a lot of setups without punchlines, and punchlines without setups. Most of the problems derive from the decision to pin the murder of Bruce’s parents on the Joker—it changes the whole emotional dynamic between Bruce and Vicki.

The Case of the Disappearing Robin is high comedy. Tim (Burton) and I had worked out a plotline that did not include the Boy Wonder, whom we both regarded as an unnecessary intrusion. Really: Our hero was crazy to begin with. Did he have to prove it by enlisting a pimply adolescent to help him fight crime? Was Bat-Baby unavailable?

But the studio was insistent: There was no such thing as solo Batman, there was only Batman and Robin. So, after holding off the executives for as long as we could, Tim and I realized we had better try to accommodate them. He flew up to my house in San Francisco and we walked around in circles for two days, finally deciding that there was no way to shoehorn Robin into our story.

On Sunday morning at 11 a.m. we were supposed to call the studio and check in with the bad news. Fifteen minutes before that call, at the apex of our misery, we decided to try one last circuit of the carpet as a gesture of good faith. And presto! With a gun to our heads we improvised a pretty good intro for Robin. It was a self-contained sequence, building on plot elements we had already introduced, and it allowed us to shove the kid off to one side in short order. We figured that if we managed to squeeze him in, the lame hacks who were making the sequel could worry about what to do with him next.

The sequence we invented was big and expensive and, if I do say so, highly amusing. Bruce visits Vicki in her apartment to discuss his double life; the Joker shows up uninvited and abducts Vicki. Bruce, sans costume, pulls a ski mask out of a dresser drawer and follows the Joker’s van by jumping from roof to roof. He eventually horse-jacks a mounted policeman’s ride and arranges a rendezvous with Alfred, who speeds up a side street in his yellow Volkswagen to deliver the Batsuit.

A few moments later, the Joker looks in his rearview mirror and sees, of all things, Batman charging toward him on horseback. So he panics. He swerves into Gotham Park and, in the course of making his escape, accidentally kills the Flying Graysons, a husband-and-wife high-wire act performing as part of the Gotham Bicentennial. But… their kid survives. And he’s mad. You can fill in the rest. 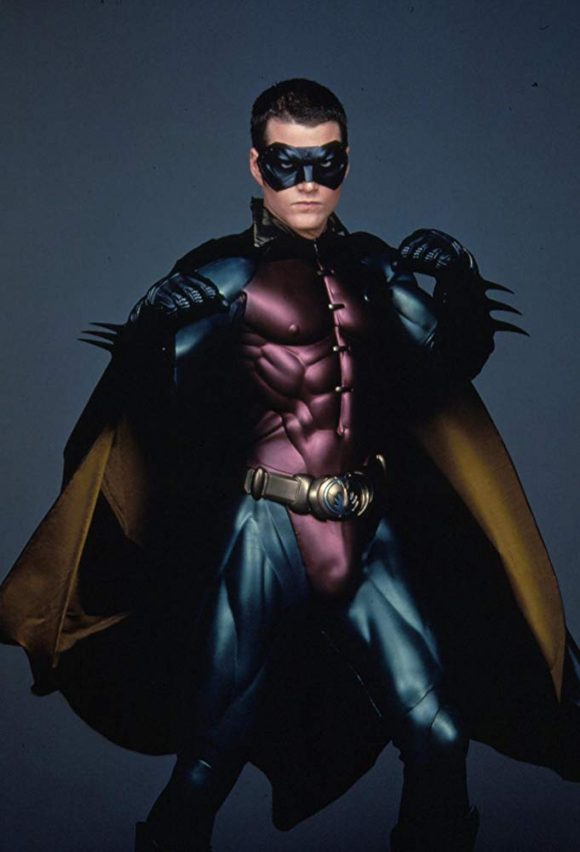 Chris O’Donnell as Robin in a publicity still for Batman Forever.

When the film went into production in London, and ran seriously over budget, WB started looking for a sequence that could be cut to save money. And there was one obvious candidate: Intro Robin!

The Knox character was supposed to get killed inventing the Batsignal, which is one of the scenes I really miss. You may recall that there is a completely extraneous scene at the end of the finished film, in which the grateful police introduce the Batsignal as a means of summoning the extra-legal badass who has made them look like a bunch of feckless incompetents. Really?