Huge, huge, HUGE news for longtime fans of both movies…

We’ve had Batman ’66 and Wonder Woman ’77 and now DC is finally giving fans what they’ve waited decades for – official comics with new stories based in the worlds of the 1978 Richard Donner/Christopher Reeve Superman movie and the 1989 Tim Burton/Michael Keaton Batman movie, both starting in July.

Not only that, Batman screenwriter Sam Hamm will be on writing duties for the Dark Knight’s series.

Here’s the full rundown, from DC: 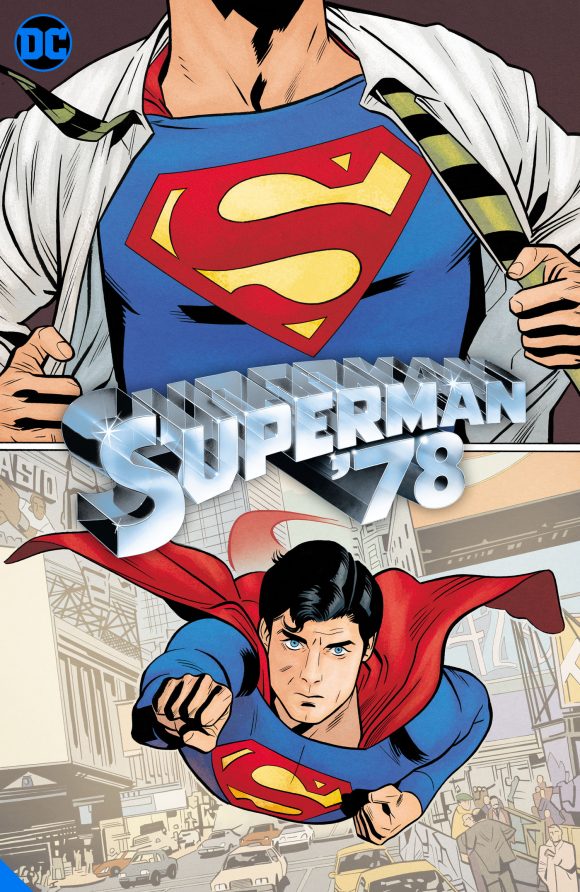 The series will “tell stories set within the world Richard Donner and Christopher Reeve created in Superman: The Movie. In Superman ’78, bystanders are surprised and delighted by Superman’s abilities, and Lois Lane doesn’t (yet!) know that Clark Kent is secretly Superman,” DC said in a statement. “The sheer thrill of seeing a man fly, leap, or stop a bullet will be reflected in this environment where Superman has just been introduced! Inspired by Donner’s classic, timeless style of superhero storytelling, in Superman ’78 Venditti and Torres will show fans that a man can truly fly.” 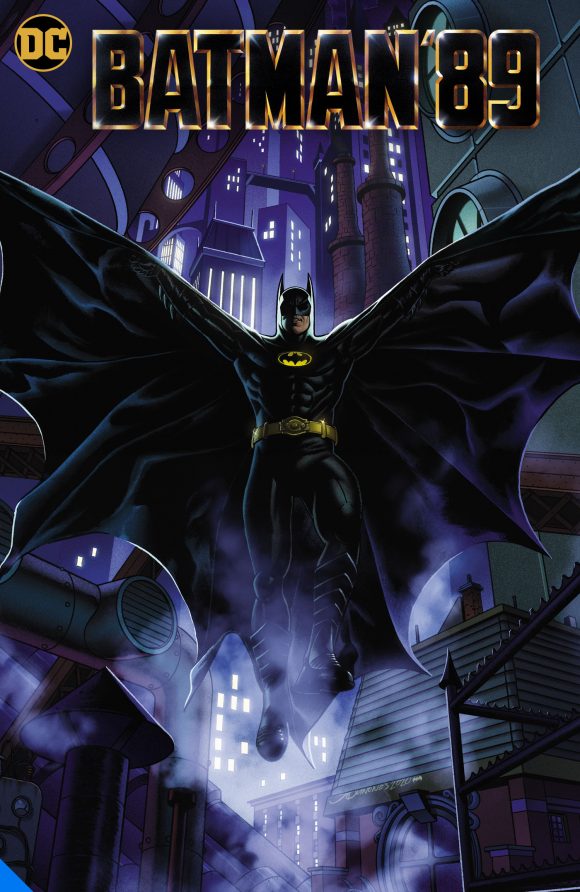 “Continuing the twisted adventures of DC’s Dark Knight from Tim Burton’s seminal classic Batman movies, Batman ’89 brings in screenwriter Sam Hamm (Batman, Batman Returns) and artist Joe Quinones (Dial H for Hero) to pull on a number of threads left dangling by the prolific director,” DC announced. “The gothic mentality behind the world, while still rooted in a sense of realism, helped inform many of DC’s global fans’ first impressions on the Dark Knight’s Gotham. In the new Batman ’89 comic, Hamm and Quinones will help usher in the return of Selina Kyle/Catwoman and will debut a new Robin! Plus, Quinones has a vision for Harvey Dent/Two-Face that is as close to movie magic as a comic can get!” 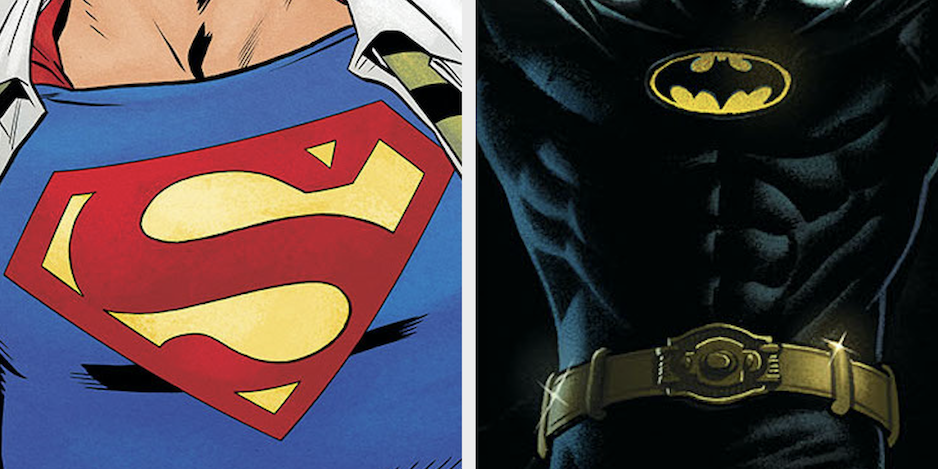 — Superman ’78 and Batman ’89 will debut with six digital chapters of each new series July 27, according to DC, followed by new chapters of each comic book for the six weeks that immediately follow. The 12 chapters of each series will also be published as six printed comics between August and October and as hardcover collections in October (Batman ’89) and November (Superman ’78).

— UPDATED: Quinones this afternoon posted these to Twitter, with the note, “We’ll be sharing more in the coming weeks and months, but in the meantime, here’s a look at some of my early character designs for the book”: 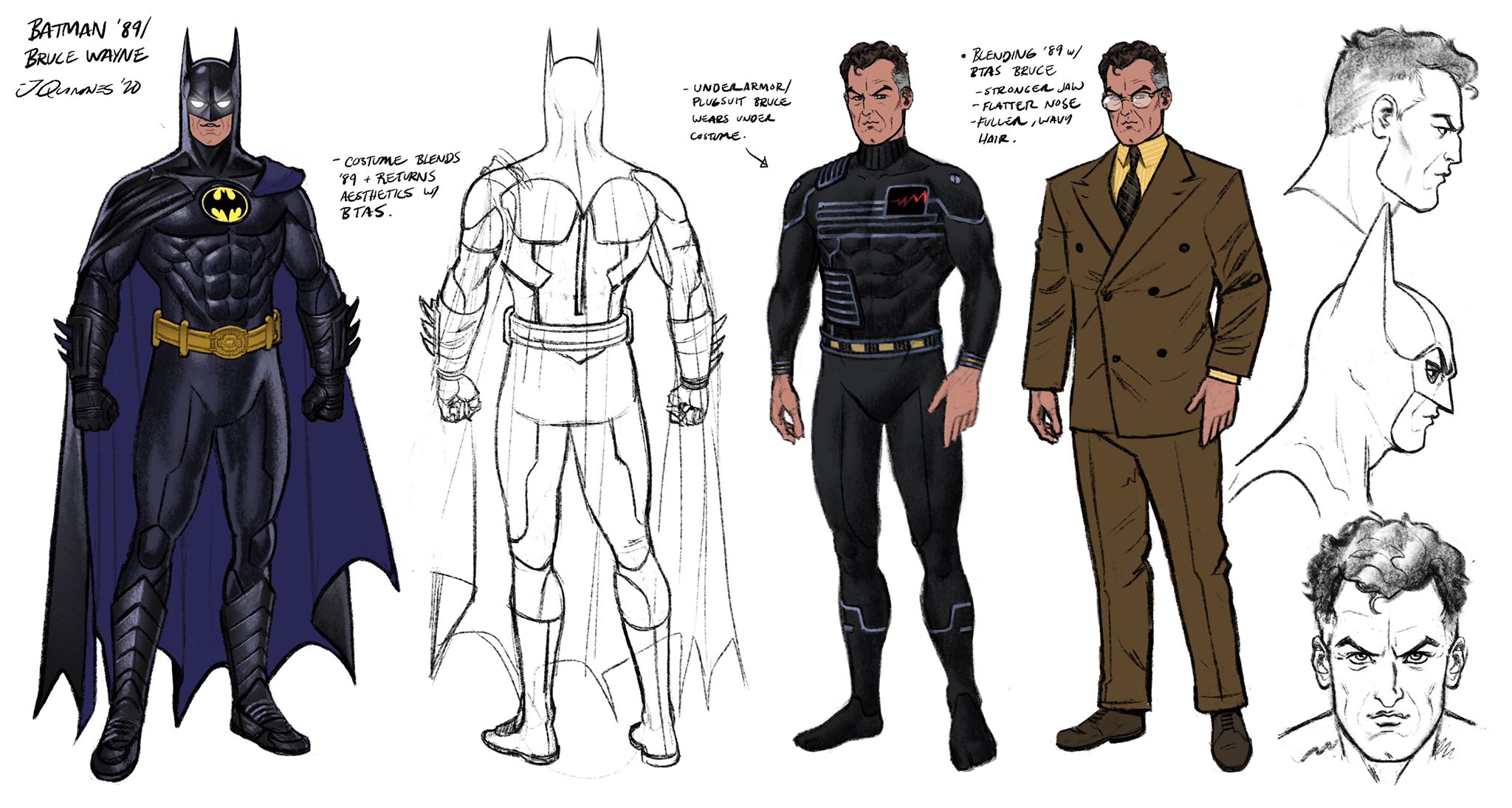 — This is easily – easily – the best comics news I’ve heard in a very, very long time. As you know, we at least got a Batman ’89 movie adaptation by Denny O’Neil and Jerry Ordway that was recently re-released as a deluxe hardcover. But this is the first time ever for any Superman ’78 comic of any stripe. (Click here for much more on that.) 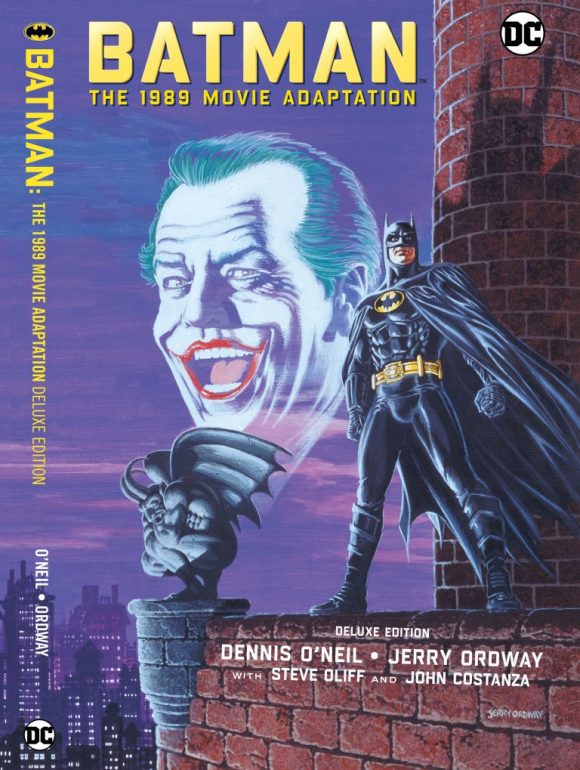 — Robert Venditti has been a favorite of mine since his outstanding Hawkman run and I have little doubt he’ll capture the right tone for Superman ’78. But, oh man, check out this little ol’ image tweeted by Wilfredo Torres in 2019 (Click here for 13 more of his GREAT SUPERMAN ’78 ILLUSTRATIONS): 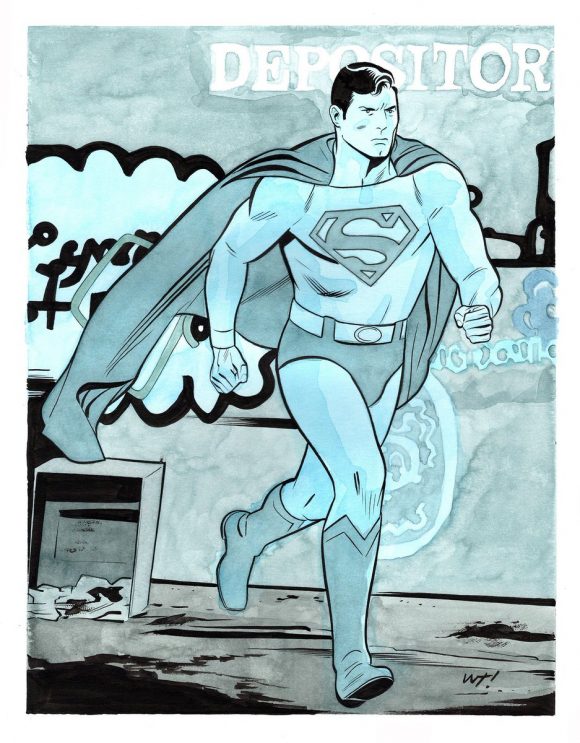 — Sam Hamm has written straight Batman comics before so he’s an old hand at this. (You can click here for the comics that inspired his screenplay.) And Joe Quinones famously pitched DC on a Batman ’89 project years ago with Kate Leth but it was rejected.

“Inspired by DC’s recent Batman ‘66 series, our story would have picked up the threads left by Tim Burton’s Batman Returns,” Quinones wrote on his blog some time back. “We would have seen the return of Selina Kyle/Catwoman as well as introductions to ‘Burton-verse’ versions of Robin, Barbara Gordon/Batgirl, Harley Quinn and Poison Ivy. It also would have showcased the turn of Billy Dee Williams’ Harvey Dent into Two-Face.” DC’s description invokes some of these concepts but time will tell on how they’ll be executed — namely whether the publisher has landed the rights to use Michelle Pfeiffer’s likeness as Catwoman, Billy Dee Williams’ as Two-Face and Marlon Wayans’ as Robin (who was originally to be in Batman Returns). (Click here for 13 more of Quinones’ GREAT BATMAN ’89 ILLUSTRATIONS). 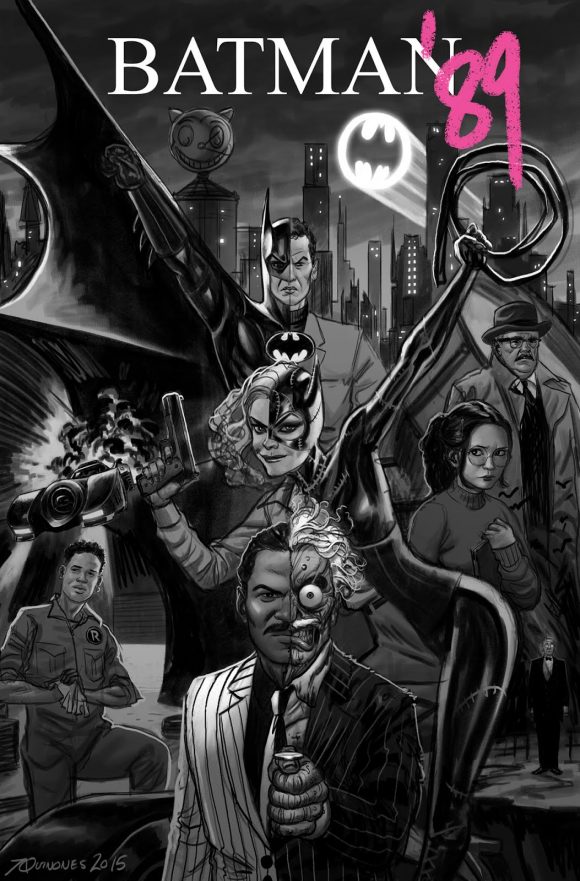 — Beyond that, I’m looking forward to finding out what likenesses DC has secured overall. With Batman ’66 for example, characters like Commissioner Gordon and Aunt Harriet were drawn in largely generic fashion with echoes of their on-screen images. That’s because the estates of Neil Hamilton and Madge Blake were not part of the licensing deal. Same with many of the villain actors.

— It’s also not precisely clear where these comics will pick up. It looks like Batman ’89 will follow up Batman Returns and ignore Joe Schumacher’s entries in the series. (Smart.) Meanwhile, DC suggests that Superman ’78 will take place before Superman II, which is an intriguing idea in itself. 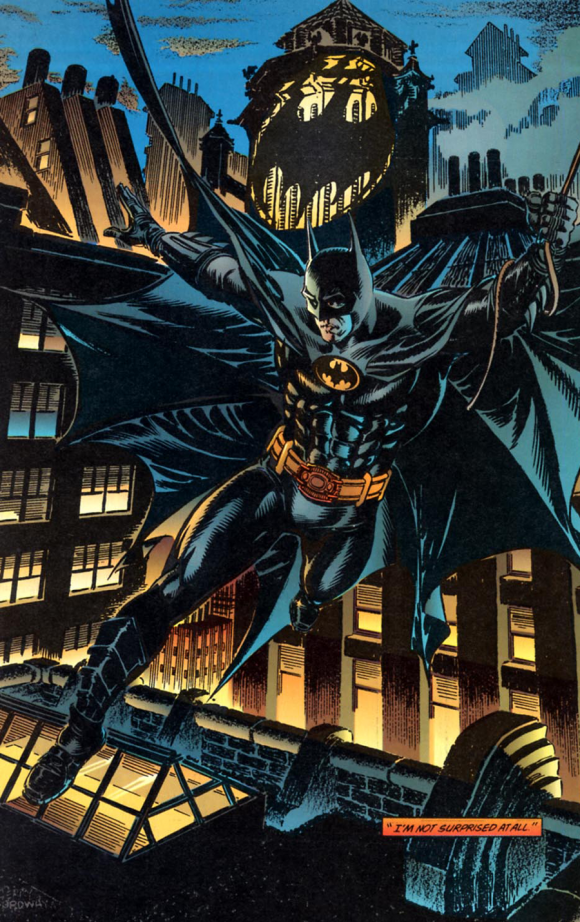 From the movie adaptation

… and a Superman one by Gary Frank: 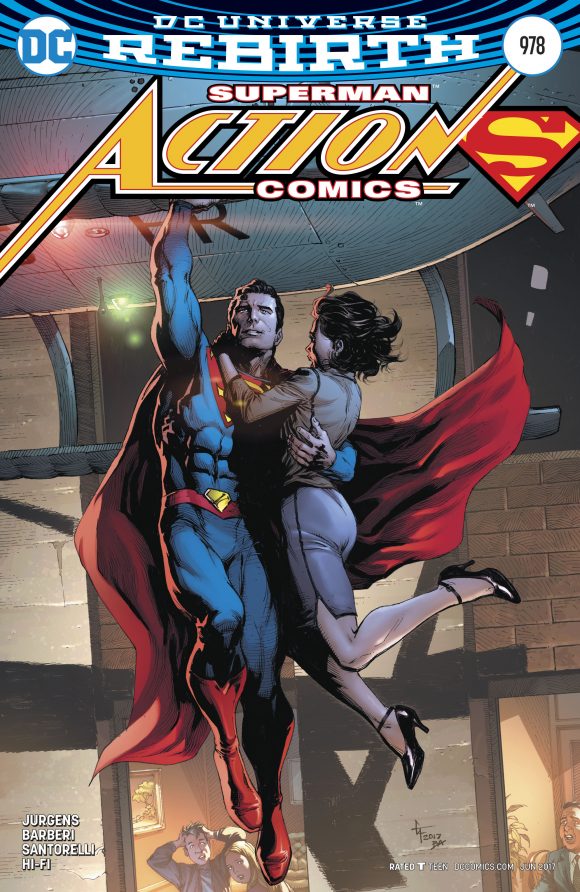 — We have much more coverage of this senses-shattering announcement — and will all week! For the SUPERMAN ’78/BATMAN ’89 Comic Book Index of news and features, click here.