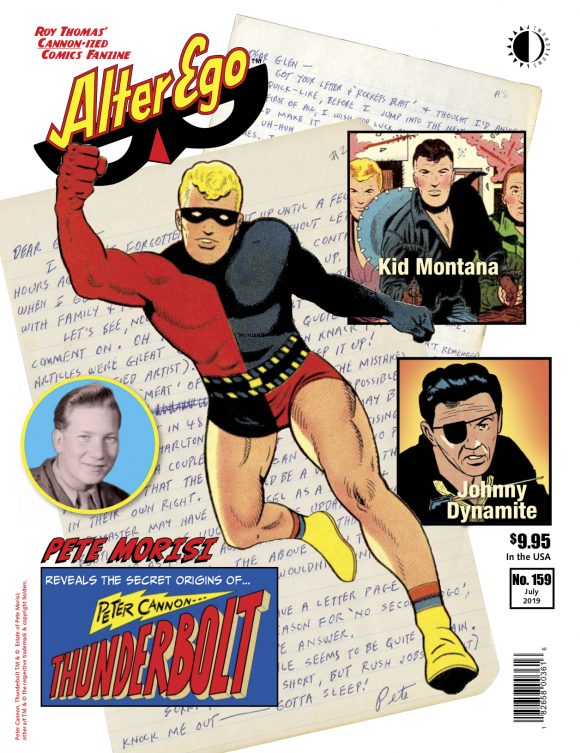 Not everyone’s a Jack Kirby or a Neal Adams or a George Perez. There have been thousands of comics creators out there who’ve contributed mightily to the form, even if they’re not the names that roll right off your tongue.

Well, Roy Thomas’ Alter Ego #159 — which is due out this Wednesday, June 26 from TwoMorrows — shines a big spotlight on one such journeyman: Pete Morisi, an artist associated mostly with Charlton Comics and his creation Peter Cannon… Thunderbolt.

As you can see by the table of contents, there’s a lot here to dive into: 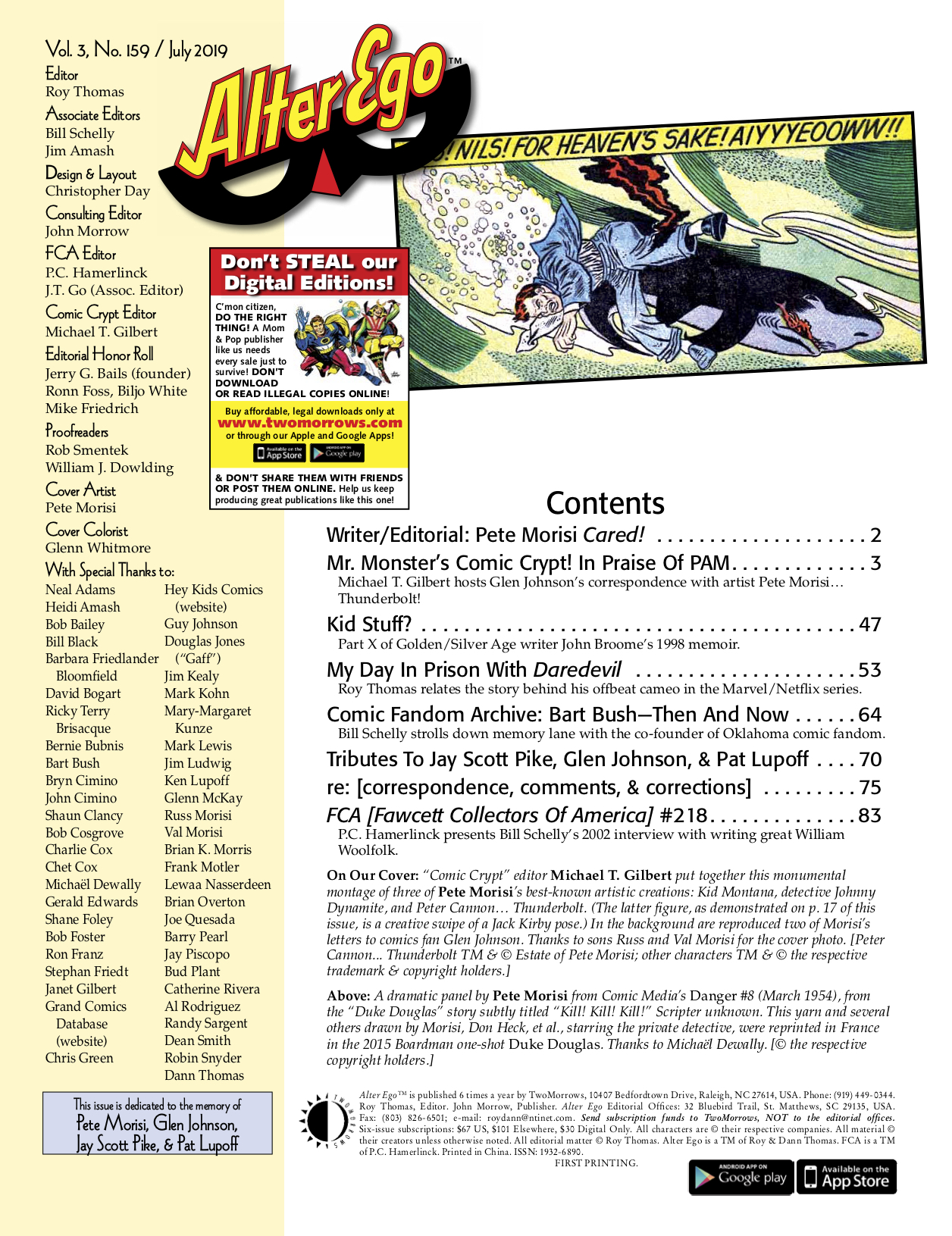 So for our regular EXCLUSIVE EXCERPT, we bring you Thomas’ leadoff column, which pays tribute to the unsung artist:

For an artist who was never associated with a truly popular superhero or other comics character—and who spent more time drawing for low-budget Charlton Publications than for Timely/Marvel or other, larger companies—and whose signature style was mostly, and unabashedly, based on the signature style of another artist entirely (i.e., George Tuska), Peter A. Morisi is certainly garnering a lot of coverage in Alter Ego.

And yet, somehow, our recent focus on the artist often known as “PAM” is very much in keeping with our publishing philosophy from the very beginning.

As our longtime ace interviewer Jim Amash has often said, in many cases you get the most information and best insights about comicbooks not from interviewing the “stars” of the medium, but from talking with (or in this case, reading the mail of) so-called “lesser lights” who were part and parcel of the industry, year in and year out, dealing with editors, artists, and (when they happened to meet them at all) writers. 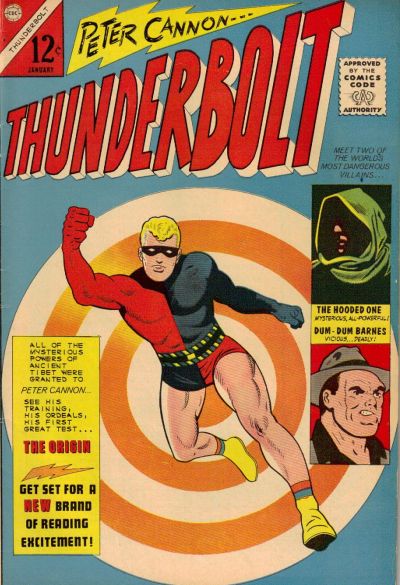 Not that Pete Morisi is a “lesser light” of comicdom by any negative standard. If he was perhaps not in the top echelon of comics creators, neither was he clinging to the bottom rung of
the ladder. For one thing, he managed to sustain a career in the hard-scrabble comics industry for a goodly number of years, between his earliest confirmed contribution (in 1946) and his work for DC’s post-Crisis Who’s Who series in 1987. And, importantly, much of this time, he was merely secretly “moonlighting” from his day job—as a big-city police officer!

For another thing, his work is not “cheap, shoddy, and anonymous” (to use one of the more infamous quotes by comics’ 1950s bête noire Dr. Frederic Wertham). Well, perhaps “cheap”—if by that you mean only that he drew primarily for poorly-paying Charlton, but that was partly by choice, as he convincingly states in missives quoted later in this issue—but neither “shoddy” (because he put considerable time and craftsmanship into his art) nor “anonymous” (because he was proud to sign stories whenever he could—it was only the exigencies of moonlighting that led him to hide behind his initials for years).

As seen in this and four previous issues of Alter Ego (#148-150 & #158), Morisi was not merely a comics professional; he was also a comics fan, an aficionado of some of the finest artists the field produced. He had opinions on what made good comics, on how comics creators should be treated, indeed, on nearly every facet of the industry. Sure, you (and I) might vehemently disagree with him on this matter or that… but that’s not the point. The point is—the man cared, and it showed, both in his artwork (and his occasional scripting) and in the letters he exchanged for years with a comics fan who was not a professional: Glen Johnson. 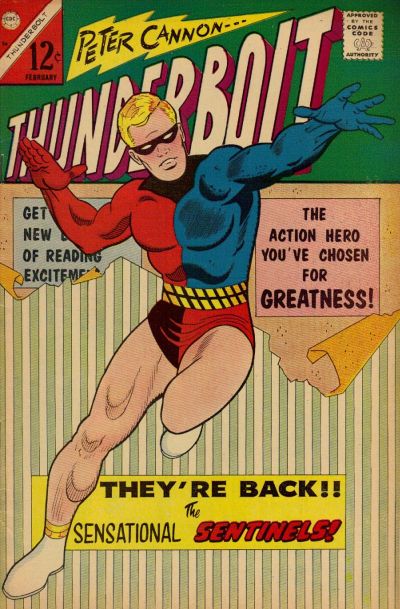 (Ironically, and sadly, Glen—who was a contributor to the first volume of A/E, back in 1965—passed away even as this issue was in production. You can read Bill Schelly’s eloquent tribute to him on
Page 73.)

Regrettably, although my very first pro-comics work consisted of scripting stories for Charlton, I never got a chance to meet Pete Morisi. I enjoyed his Peter Cannon… Thunderbolt and occasional other artwork I’d run across, but our paths never intersected. If they had—well, I’m sure we’d have had some animated discussions (including disagreements) on various comics-related points… but I’d have loved to have known Pete Morisi.

But, you know what? Through the unstinting efforts of first Glen Johnson, then Michael T. Gilbert… I almost feel as if I did. And so will you! 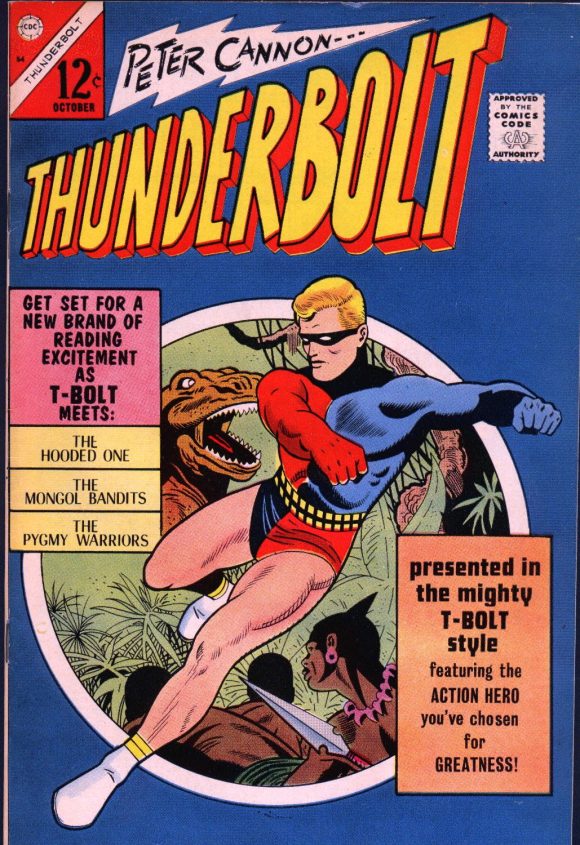 Alter Ego #159 is out 6/26. You can get it at your local comics shop or directly from TwoMorrows. Click here.